You will not regret not taking that shot. You did the smart play by not shooting when you are not comfortable. Tomorrow will bring more opportunities.

Bill DeHaan said:
Sjakon, I feel for you on that brief opportunity at the waterhole. But the old saying is true; "discretion is the better part of valor". You'll get another crack at one. We're all raising our glass tonight and pulling for you guys tomorrow!
Click to expand...

Thank you. This buffalo grazing was a nice bull of a heard but not the giant we saw running away. I will not hesitate again.

Good luck your hunting with a pro!
Tommorow is promised to no one. Go live your dreams.

Thank you gentlemen. It is nearly 5.30 AM here. We will be going for hopefully my second chance soon.

The harder you work for it the more rewarding it is.

We left camp at 5.30 AM and drove along the road till we saw fresh tracks. We sent up the drone but did not see anything.

Marius took us on the tracks and after a couple of hours we reached dense thickets with now and then the sound of a snapping twig. We could see the rump of a cow but nothing else. The wind changed and the buffalo were off in an instant.

We walked back to the road and searched with the truck for new tracks when about 30 buffalo crossed the road several hundred meters away. We tracked them for an hour and our tracker told us it was only cows and calves.

Marius suggested we go check tracks again however it was getting so hot the two PHs suggested looking for plains game and in the afternoon resume buffalo hunting with George just looking for additional plains game.

I thought this was a good idea and said I wanted a zebra skin.

We were driving back when in the distance there were several zebra who ran off. We tracked the zebra for several hundred meters and there they were starring at us.

I placed the .375 on the tripod, zoomed up to 5 X aimed at the center of the lower chest and squeezed the trigger. I heard the thud. The zebra ran off and I was worried it was a poor shot however at the place I shot it there was a large pool of blood. We tracked the zebra for a couple of hundred meters and found it down with a bullet hole exactly where I aimed.

Marius said this how I should have handled the buffalo. Well it gave me a lot of confidence and look forward to searching again for buffalo in the afternoon. 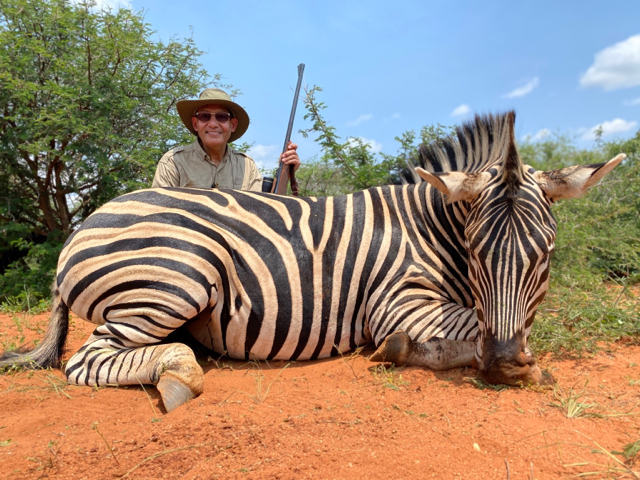 We had a great meal of blue wildebeest hamburger and fried chips. Never had better.

Last night we had inner strips of George’s Impala. It tasted like top grade wagyu.

We sure can’t complain about the food here.

This is a great report. Thank you for the real time approach. Did I see Bossie Mostert on one of the pictures?

Sounds like a intense and fun time tracking buff in thick Stuff!
John 3:16

congrats on a beautiful zebra!
John 3:16

Nice zebra! I can’t see any scratches on it.
What is a “wagyu”?
I really enjoy the real time reports! Thanks putting in the extra time to do it.
Africa on my mind.

Ridgewalker said:
Nice zebra! I can’t see any scratches on it.
What is a “wagyu”?
I really enjoy the real time reports! Thanks putting in the extra time to do it.
Click to expand...

Congratulations nice zebra. Can’t wait until I get back there next April. Continued success!
Tommorow is promised to no one. Go live your dreams.

Well we looked for buff again and gave up nice shots on a big blue wildebeest and golden wildebeest but did not find them.

Best of luck in your continued quest. I'm watching with interest as in 150-odd days, I too am hunting Buffalo with Marius. Please keep the report coming!

I'm sure that together you'll find what you seek

Good to get a confidence animal. You will have a nice skin from that Zebra.

George got an Oryx or Gemsbok 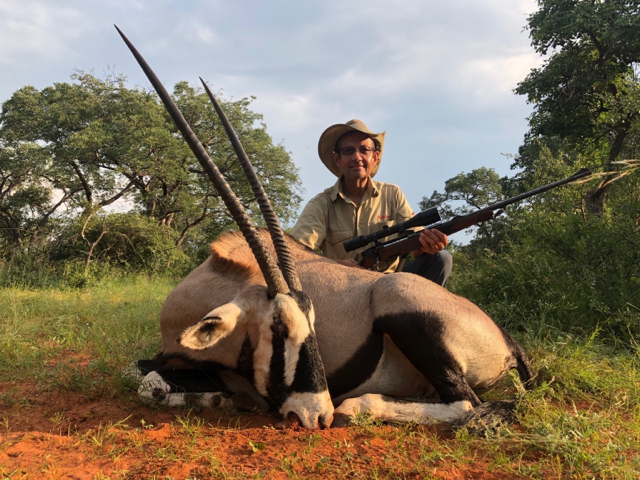 2 hours looking for tracks on the truck

Finally stalked for 3 hours with Marius and shot a buffalo in the chest. Turned out to be too low and hit the brisket missing the heart.

We tracked for another 4 hours and Marius found it.

Suffice to say another .375 rounds dropped it.

A magnificent trophy. Marius and all his team are the utmost professionals. I can not thank them enough.

We go to location 2 later 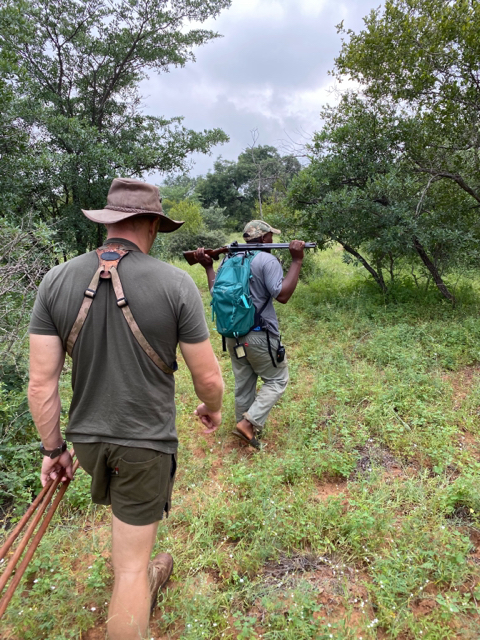 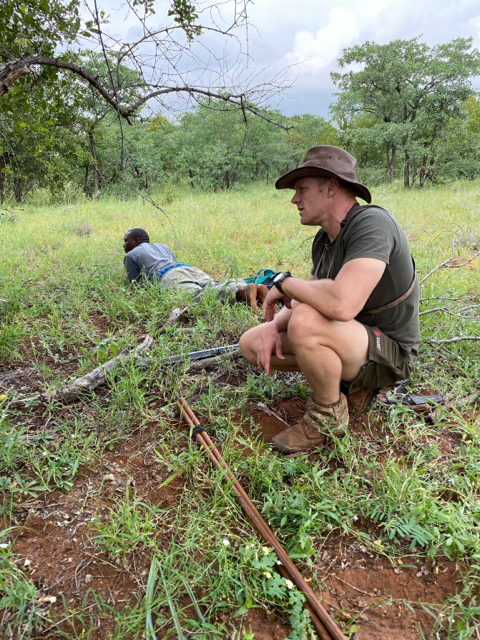 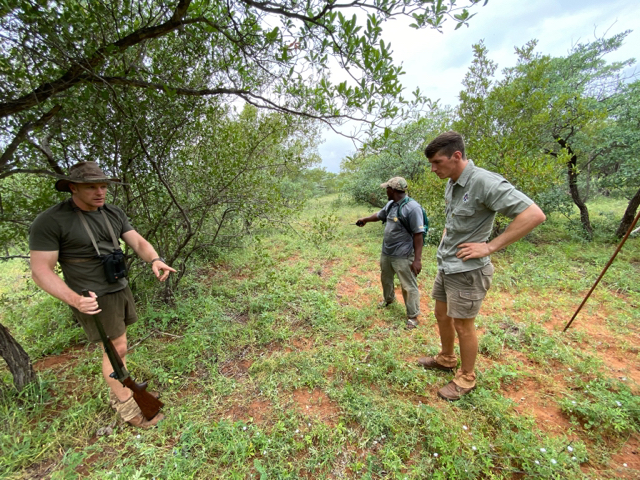 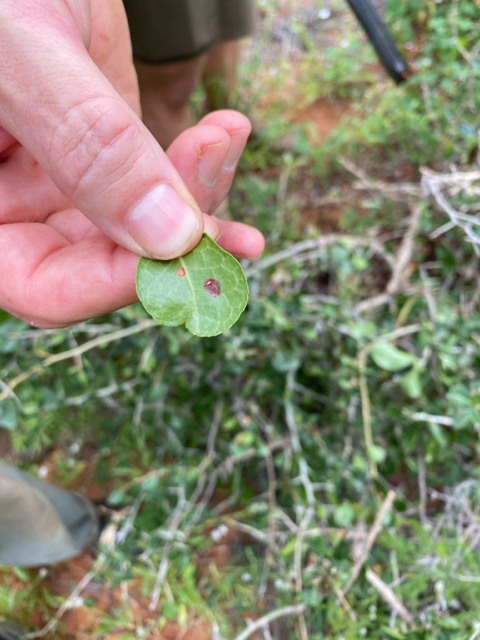 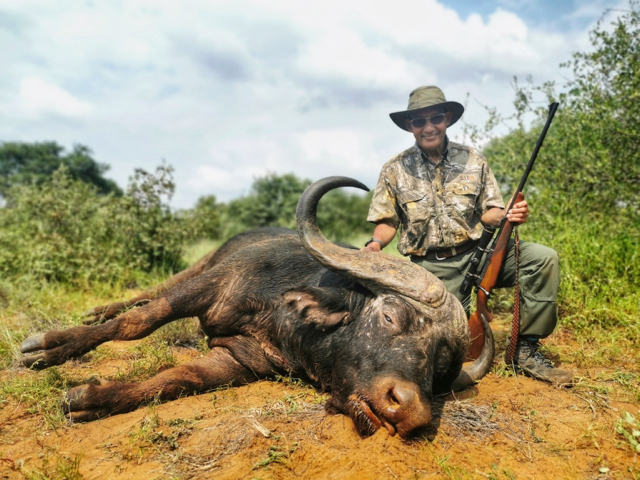