I recently went on my 2nd safari with outfitter, Great Land Safaris, Thabazimbi, SA, managed and guided by PH, John Henry Keyser. My safari took place from July 21 - August 2, 2010. I can't begin to say enough about John Henry's knowledge of the game, culture, and people of Africa. John Henry, his wife, Trish, and family made me feel like part of their family while making my second trip to the Dark Continent 1st class.

Here are some of the highlights from my trip including my quest for a once in a lifetime kudu.

It all started in 2009 - my 1st trip to Africa - I thought it would be an experience and I would probably never return again. Wrong! After my 1st trip I was already interested in setting up my return trip to Africa a couple years down the road, but as luck would have it I would be back again within a year's time frame.

During my 2009 trip with John Henry, Great Land Safaris, we were hunting kudu at a location known as Mamba. Beautiful mountains and lots of game. It was my birthday, July 3, and getting close to dark as we had been looking for the right kudu and had already passed up on many as John Henry thought we could do better.

John Henry was right and we stumbled upon a monster kudu and I was caught off guard as everything happened so fast. Long story made short I took my shot and missed. I was so sick as I knew this opportunity probably would not present itself again. To be honest I lost my stomach a couple minutes later after we confirmed I had missed the shot. John Henry estimated the kudu to be around 58 inches. I returned to camp empty handed with exception of my experience.

Here is what I feel makes John Henry and excellent Professional Hunter. He consoled me after my miss, told me to keep my head up, and reminded me what hunting was all about - it is not about chasing inches rather being a part of an awesome experience. He acted as professional and coached me throughout the rest of my trip. He picked up on my habits and shooting tendencies and helped me make the proper adjustments. In all I left Africa in 2009 with zebra, impala (3), nyala, waterbuck 29", kudu 49", warthog 13", and most importantly a great friendship and a lifetime experience.

And now the real story begins:

I am a salesman by trade and two months after returning from my trip from Africa something happened - while I sat in my car preparing for my next call I kept reliving that shot at the monster kudu. How could I miss? Will I ever get a chance again? This kudu visited me in my dreams and I kept thinking about Africa, Africa, Africa. It is all I could think about - kudu hunting in Africa. I had unfinished business!

Then I picked up the phone and called John Henry and said "That's it - I am coming back to Africa to find my kudu!" He laughed and we started making plans for my return trip with the help of my friend and Texas Guide, Lowell Odem. We had eight months to prepare and I did my part practicing shooting from different positions, distances, and building confidence in myself. John Henry did his part scouting different locations and talking with other landowners to make my time in Africa one to remember.

I arrived in Africa on July 21st and our hunt began. We started where it all had began in 2009 - Mamba. For the first two days we saw lots of kudu, but not the one we were looking for. On the third day we came across one we could not pass up. Late afternoon on the mountain 150 yards away I let the lead fly. Perfect shot and seconds later a 53" kudu rested upon the mountain with the sun setting. One word: Beautiful.

I was out of breath and trying to take it all in and John Henry was just as excited as I was. He loves hunting and this is his passion and life which made this experience all the more memorable. If you think this is where the story ends - then you are wrong!

Days passed and I harvested 2 zebras, and a monster common reedbuck 15" with huge bases, but John Henry was not done and had a surprise for me - he had been scouting a monster kudu and that would require our attention for the remainder of the hunt. That meant no more diet cokes and candy for me - I needed to be at my best and remain calm, steady, and poised for a possible dream kudu. John Henry estimated the kudu he had been scouting to be around 58".

Two days went by with no luck or sign of the monster kudu. At night I found it hard to sleep knowing that I might be able to stumble across this beautiful sight. On the third evening everything changed. John Henry and I knew that something was different and something magical was about to happen - and then it did.

We came across several kudu, male and female, with one exception, one that was not to be mistaken - it was the kudu we had been searching for. Once again everything was moving so fast - I thought about the last time I had missed, but John Henry was quick to coach and calm me down. He had confidence in me and my ability to make the shot and more importantly he gave me the opportunity to make a dream come true.

The monster kudu saw us and began to quarter away - John Henry kept me calm and I placed my rifle in position to take the shot. Kudu moving everywhere now and John Henry remained poised and would not let me take the shot until it was the right time. The monster kudu stopped for a moment and there was my opportunity. "Now Derek - let the lead fly," John Henry stated. The lead flew 150 yards just behind the shoulder of the kudu. The kudu jumped up with its back arched as we heard the partition make impact.

At that moment I could hear hearts beating - I couldn't tell if it was mine or John Henry's. It was both of ours. I almost passed out after taking the shot and John Henry smiled and laughed with positive encouragement. The kudu had taken off to the left of us and fell 50 yards from where I had shot it. We called for the rest of our hunting party and they joined in the celebration. I could care less how big the kudu was and thanked John Henry for letting me be a part of this experience. I hugged my kudu and stood with disbelief at what had just happened.

Just for grins John Henry measured the kudu while we took pictures - John Henry gasped he was wrong - he said he was off by three inches. 55" inches is a monster I said - no Derek he stated the kudu is 61". Take a look for yourself - the bases and the ridge around the curls of the horn are enormous. 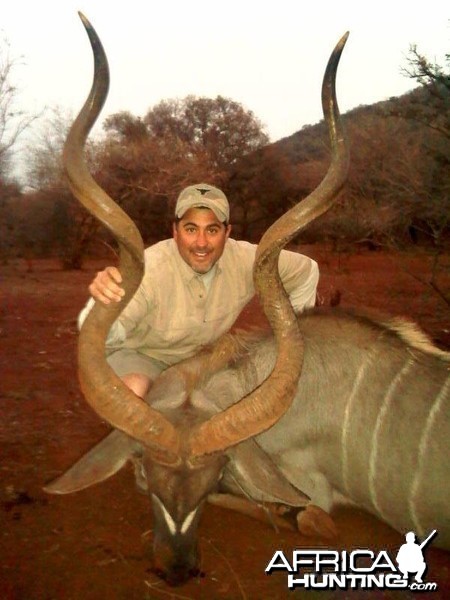 I have learned much from my friend and PH, John Henry, Great Land Safaris. I without hesitation recommend anyone who is interested in rifle or bow hunting to utilize his services. Please, feel free to reach out to me for his contact information.
Last edited by a moderator: Dec 1, 2016

Thank you F.L.A.S.H. for reading. I love learning and my experience in Africa and hunting with John Henry has changed the way I approach hunting. I can't wait to return for buffalo!

Being a kudu hunter...I'm extremely jeolous of your awesome kudu (lol)....but I'm glad you had a great hunt and have the "africa hunting bug" now...there is no cure...only hunting cures it .

Certainly one of the most if not THE most beautiful and symetrical Kudu I have ever seen a picture of! Absolutely stunning! What a trophy! I remember how tickled I was just to get one slightly over 50 inches, in fact the one I use for my avatar, but this... Now thats a kudu!

Sestoppelman thank you for reading my post. I still am in disbelief and seems I work to hunt and look forward to my next trip to Africa. I will definetly be hunting the Grey Ghost once again.

Congratulations a great Kudu and a very good hunting report enjoyed the reading. Bob
Enjoy Life Now! It has an Expiration Date.

Great kudu and a great recount of your hunt! I'm glad I'm not the only one who after coming back from their first safari thinks about Africa every single day for extended periods of time. I just can't get it out of my head!

Phoenix Phil if you find the cure please let me know - I have even thought of ways to possibly move there. It is just crazy how contagious hunting in Africa is.
You must log in or register to reply here.