A note from @AfricaHunting.com: As of May 1, 2019, @One Day has accepted to represent HUNTERSHILL safaris on the forum. His report on his August 2018 hunt at Huntershill predates this decision by almost a year and was filed when he was just a private party. Jerome Philippe, Founder of AfricaHunting.com

It was with some level of trepidation that I booked a plains game hunt with Huntershill Safaris. There are not a lot of Huntershill videos on You Tube; there was a conflict among partners some years back; and Huntershill price are very good. "Are they too good?" was my wife's question...

Since the trip from Flagstaff AZ (USA) to East London (RSA) would take 48 hours, and I would be in a plane or in transit for a total of 4 days going and coming back, I wanted to hunt more than 5 or 7 days. That meant a substantial trophies list, and I did not want to spend 4 to 6 hours per day on the highways going to and from various properties to hunt a specific animal, as is all too frequent - and, sadly, generally not disclosed ahead of time - with many Eastern Cape outfitters who offer a number of different species.
So, the 68,000 acres owned and operated by Greg Harvey, the owner of Huntershill were appealing, and the 80 or so species offered everything I could wish in term of animals.
So, I engaged the email conversation with Huntershill...

To my pleasant surprise, my emails to their agent were promptly answered and when I asked very specific questions, I received answers from no other than Greg Harvey himself.
Yes, I could customize my hunt duration. I ended up staying 2 full weeks, Arriving Sunday July 29 and leaving Saturday Aug 11, which was one of the smartest decisions I made considering the very reasonable cost of additional hunting days.
Yes, I could customize my trophy list. Very soon the initial package I selected was completely modified to remove animals I was not interested in, and add animals I wanted. I was concerned about endless "car-salesman" type haggling, but, again to my pleasant surprise, things were easy, and Greg swapped, removed, added as I wished. And the numbers kept looking good.
Yes, I could elect to hunt on foot with a PH specializing in 'spot & stalk.' Of course, the hunting truck would be used to go to the various hunting blocks, but from there it would be purely on foot if I wished so. Which was exactly my wish.
Yes, all of the species I wanted (except one, the bushbuck, that lives in a very specific habitat) are in abundance at Huntershill itself. And actually, Huntershill also hunts some next-neighbor properties, so over 100,000 acres were available and in 14 days I never hunted the same ground twice. That is a tremendous advantage compared to some smaller operations where you hunt the same ground 5 days in a row.
Yes, yes, yes to any question and request. Wow! This will be either very good ... or very bad. Generously, my wife suggested that I spend more money to go somewhere else with more 'Internet presence.'

But I went with Huntershill. I liked Greg Harvey's direct, succinct, no non-sense business-like answers; I liked that he is running very successfully a major business group (the Queen group), and I liked what I was about to get for what I was about to pay. That decision was one of the best I made over 40+ years of hunting.

I will be augmenting this report with additional parts over the coming days/weeks but suffice to say that Huntershill Safaris not only delivered on every commitment they made to me, but over-delivered well beyond my wildest expectations: five stars accommodation; French speaking Chef; incredible hunting territory; highest quality animals; never saw a blacktop road or stayed in a truck more than 20 minutes in 2 weeks (aside from going to the bushbuck hunting block 2 hours away); never hunted the same block twice; fantastic PH (I was lucky enough to have Huntershill's Head PH Jason Olivier - more on him later); shot a number of trophies qualifying for various 'books' if I cared; etc.

But enough talk, let me show you... 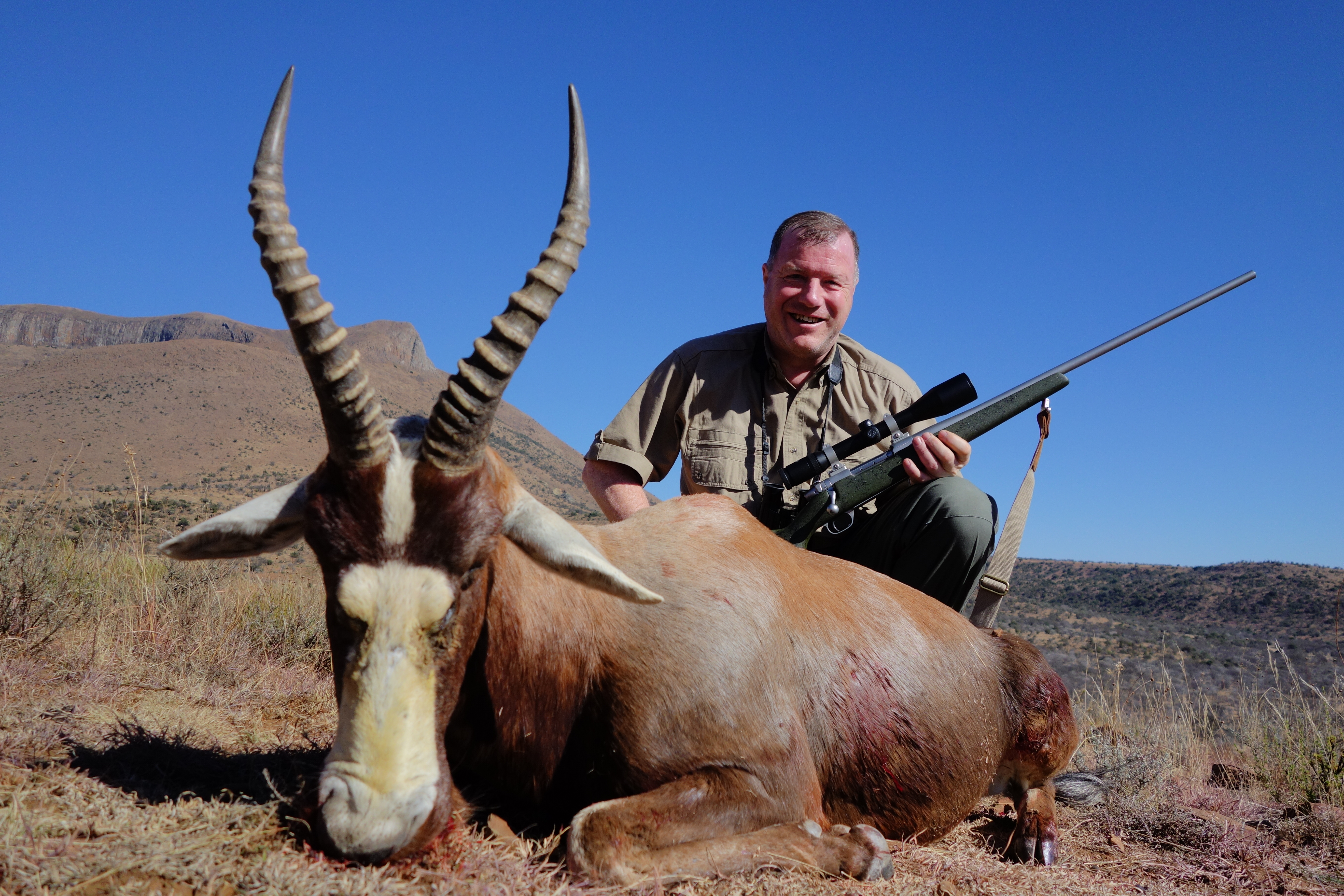 A very representative Blessbok. Solid mass, good length, worn out ridges and tips.
Last edited by a moderator: May 1, 2019 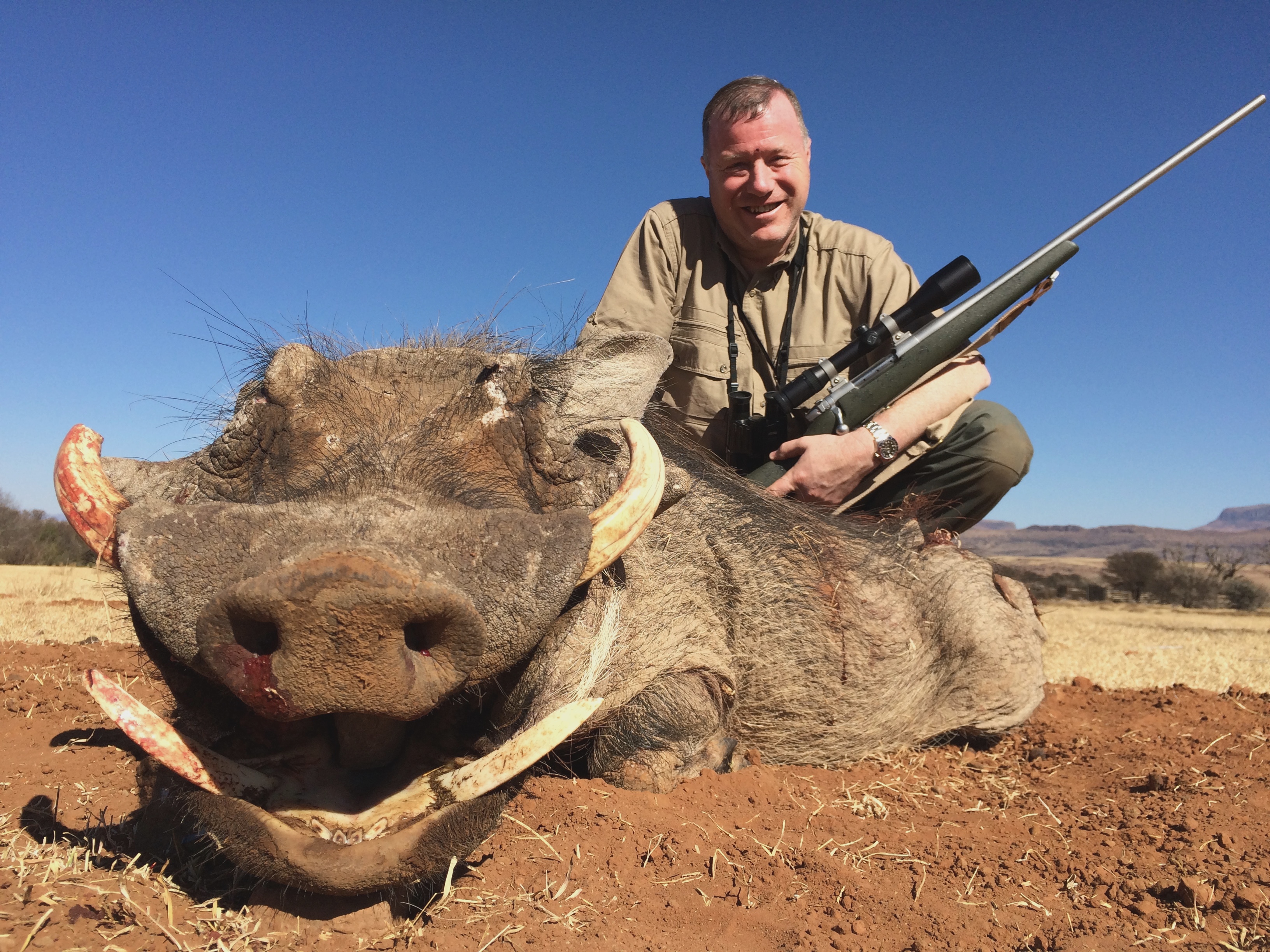 An old warrior warthog full of character, worn out tusks and all. 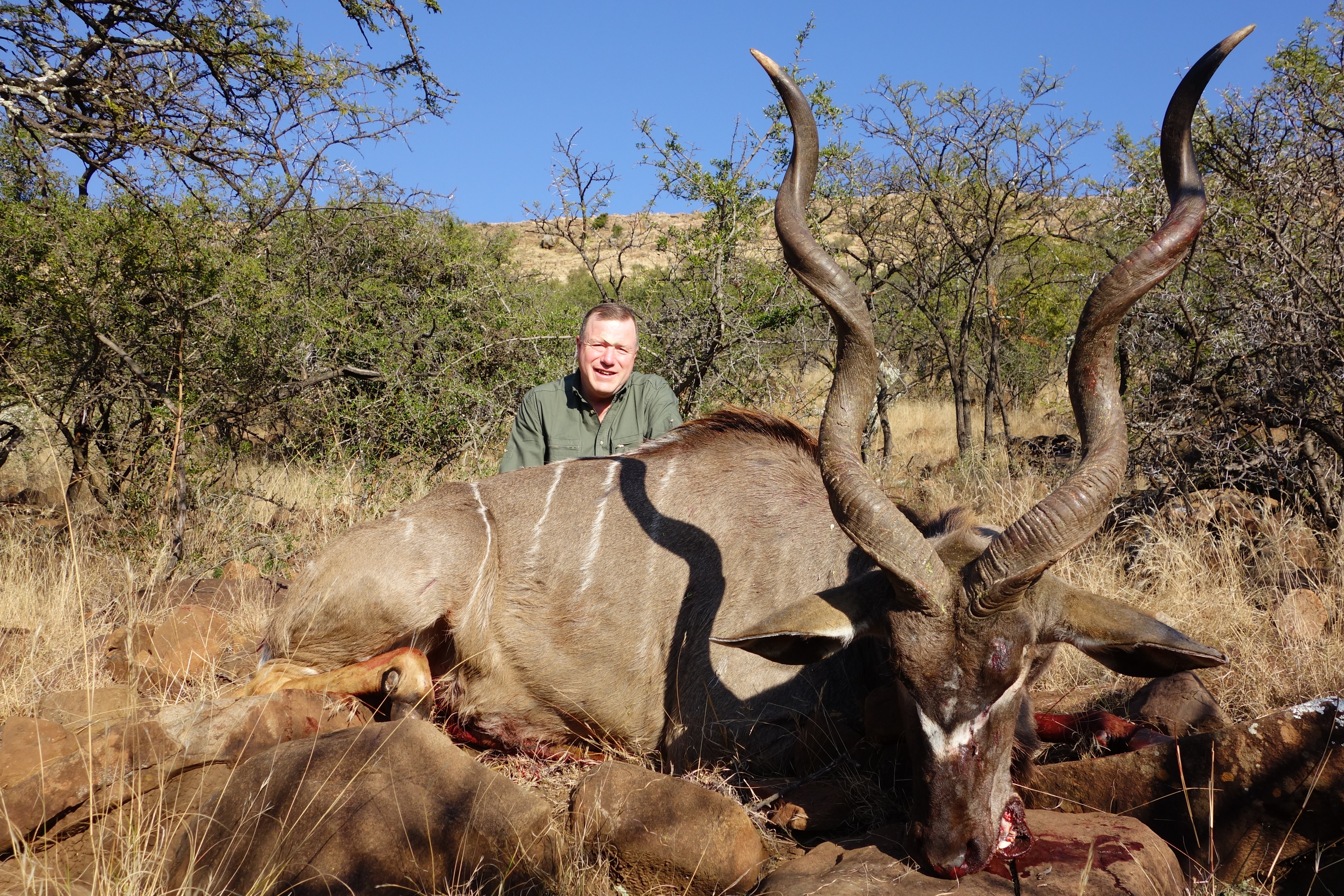 I can probably go back to Africa 15 times and never shoot a better Eastern Cape Kudu. Incredible length, fantastic mass, 3 turns, 4" ivory tips, worn ridges, it has it all. 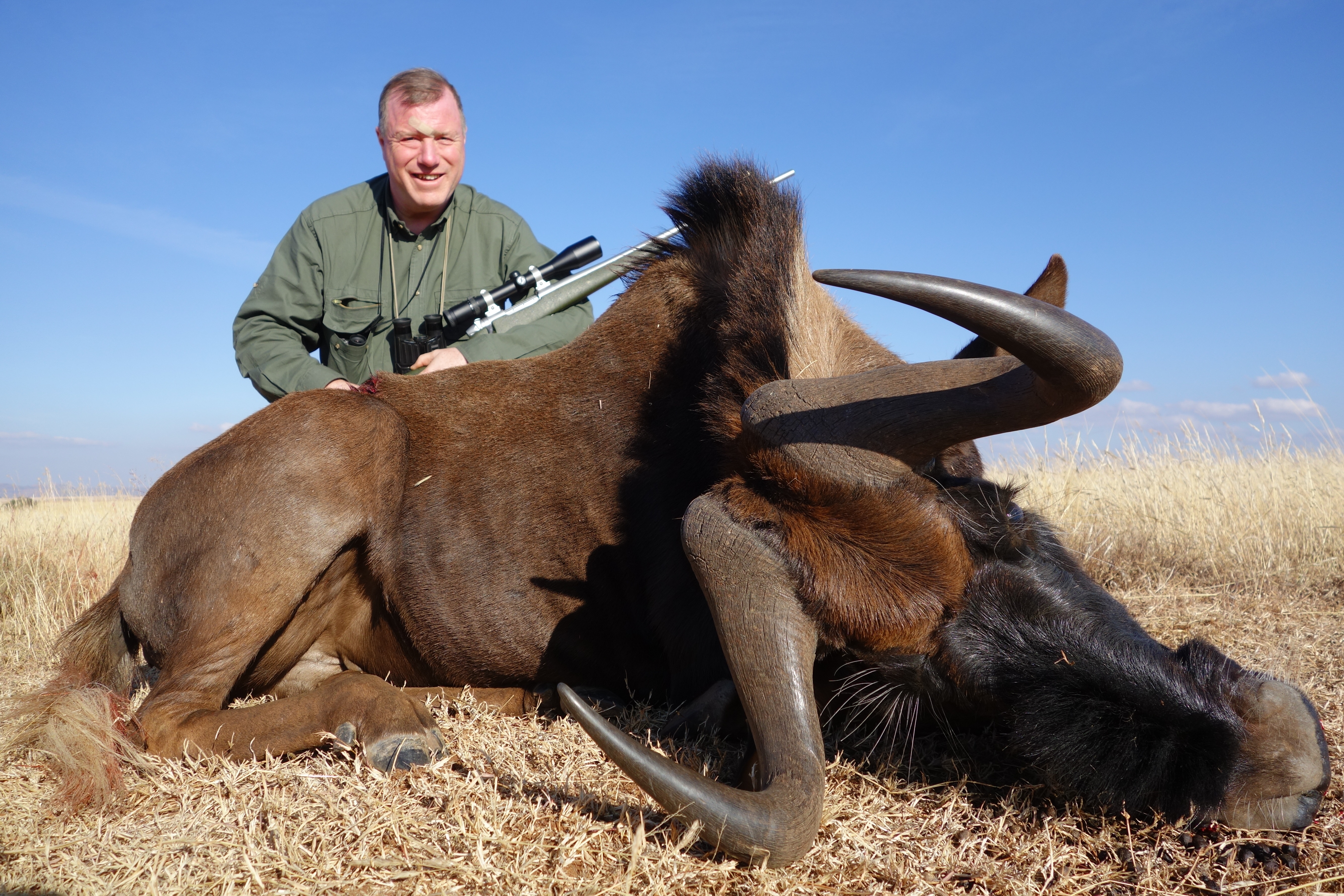 A very solid Black Wildebeest. It is probably not 'making the book' but its old bosses are cracked and its tips are worn down from many years of bush life. A great representative specimen. 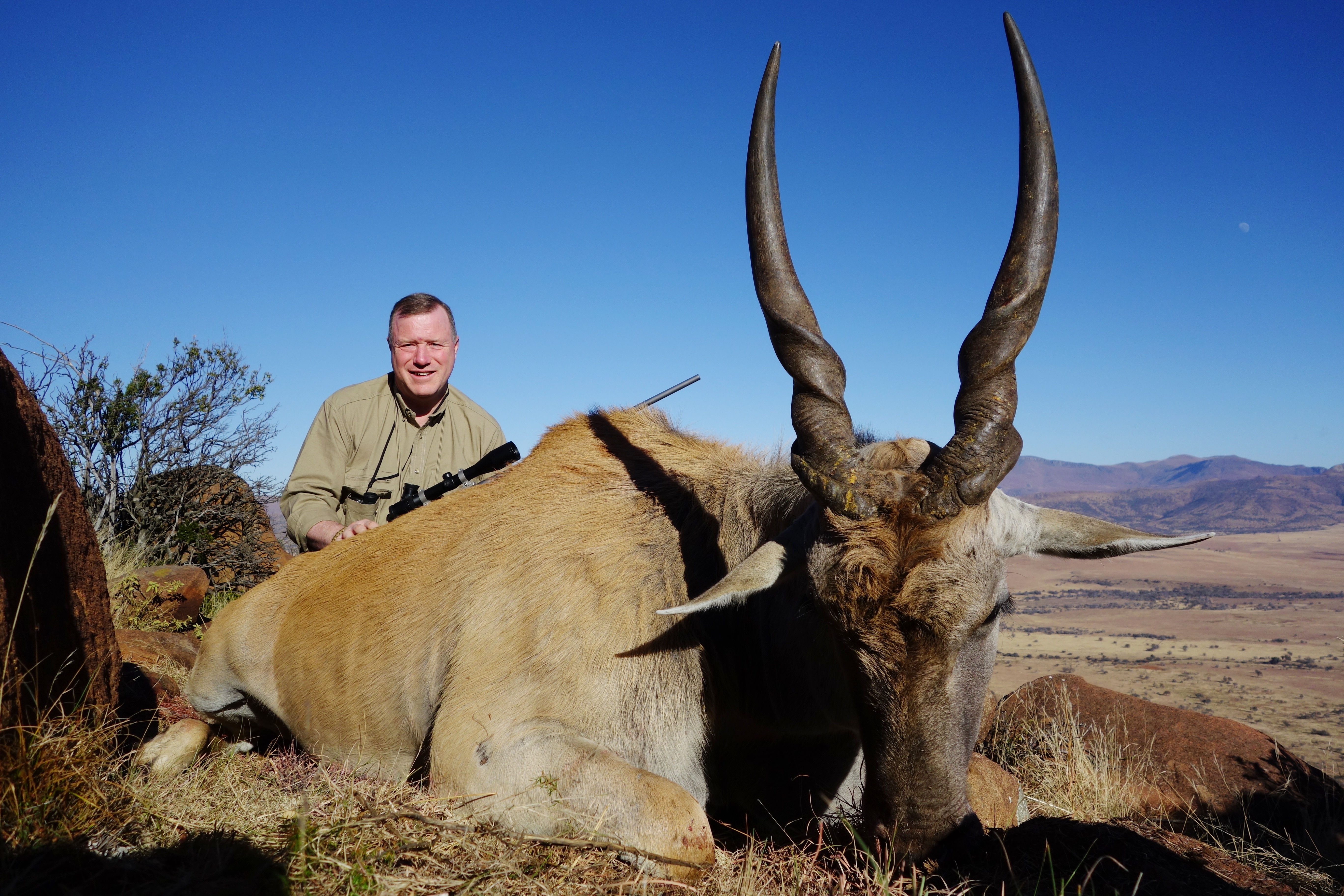 Massive Eland. Look at that character! What else to say... 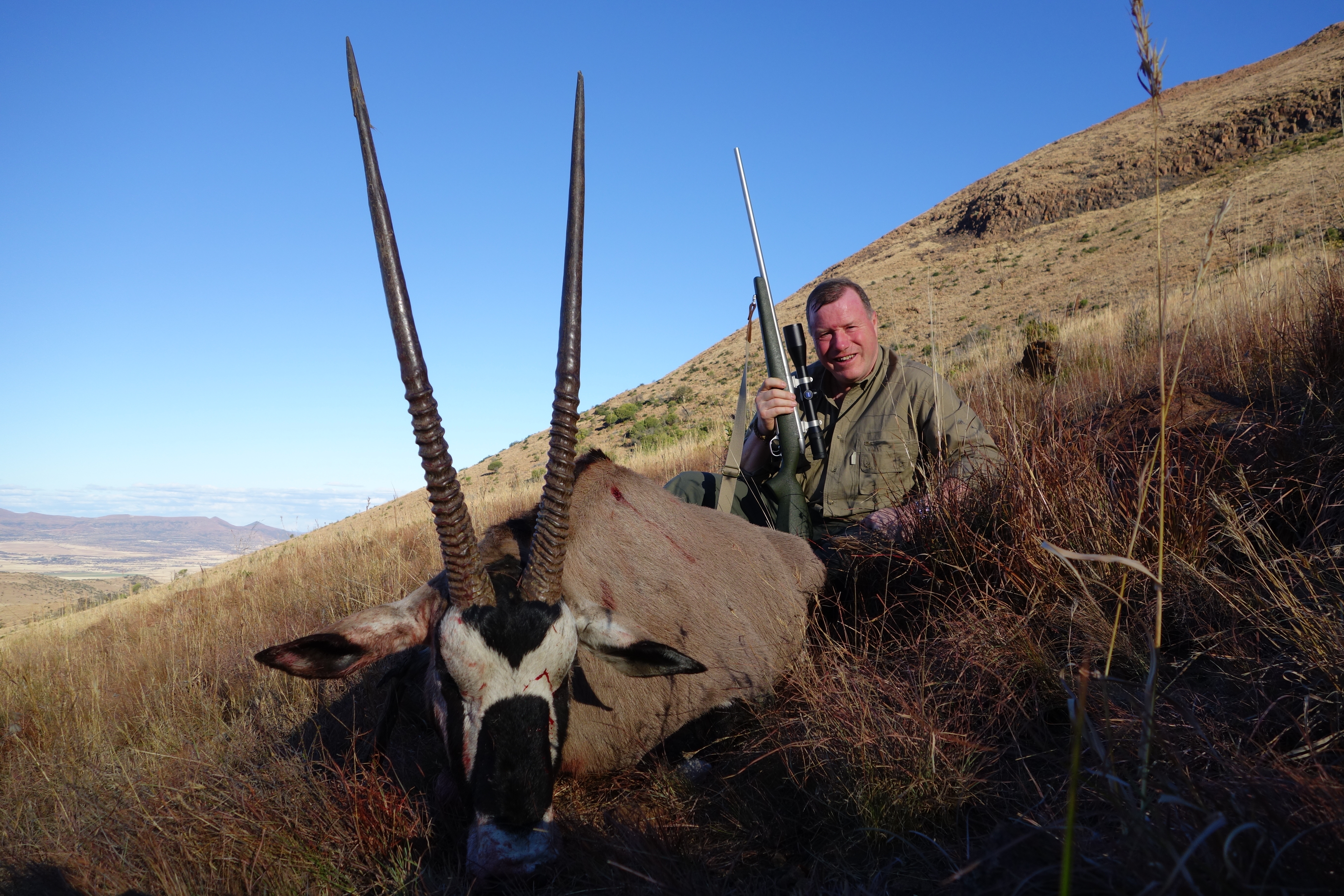 Yes, female Gemsbok have longer horns. But look at the girth and mass on this old male's horns! And there is no telling how many inches he wore off these tips. 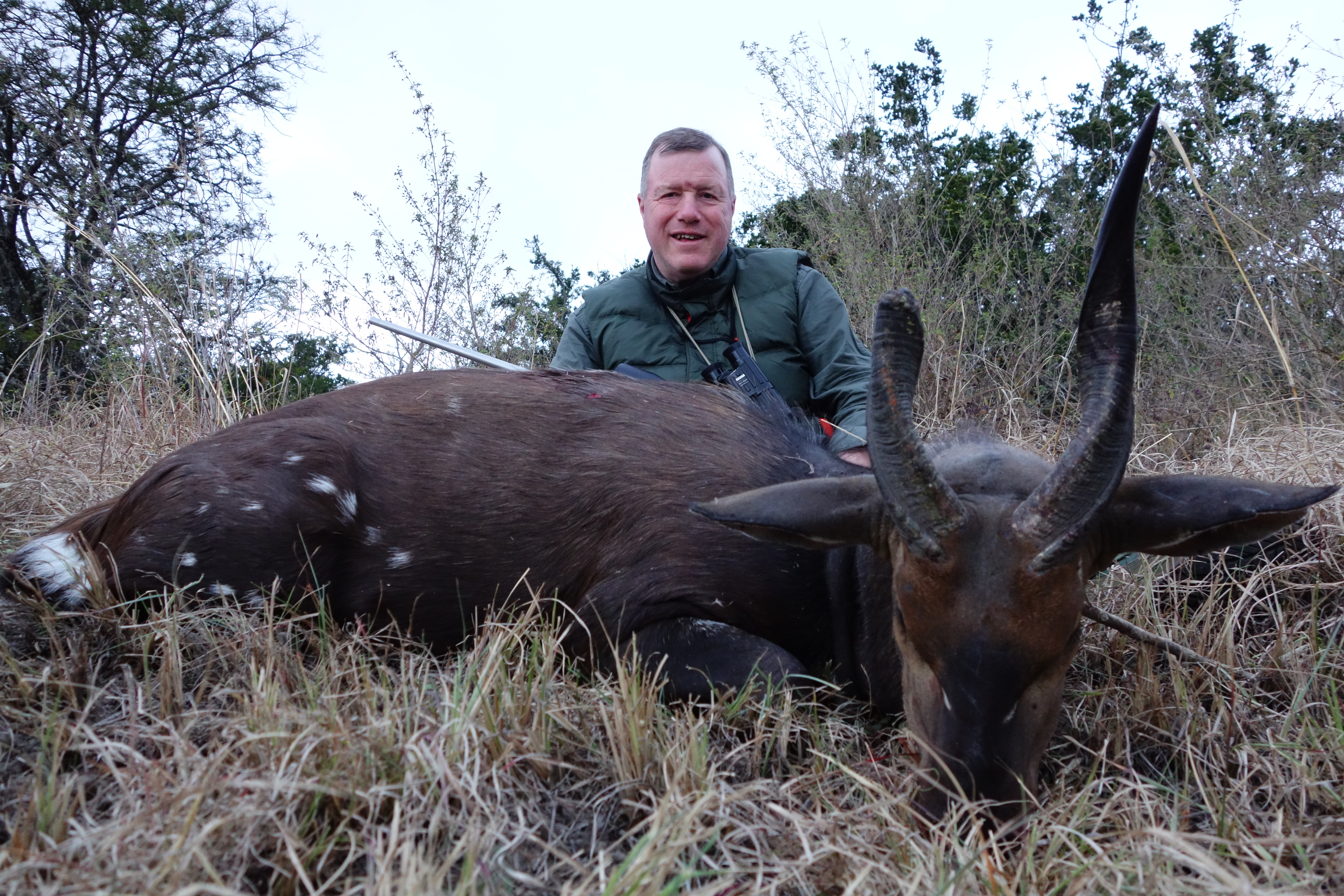 A grand old bushbuck with fantastic mass and incredible character. This is the only animal shot outside of Huntershill. We went to Head PH Jason Olivier's friend, John Blaine's property 2 hours away. This is the only time we touched blacktop in 2 weeks.
Last edited by a moderator: Aug 26, 2018 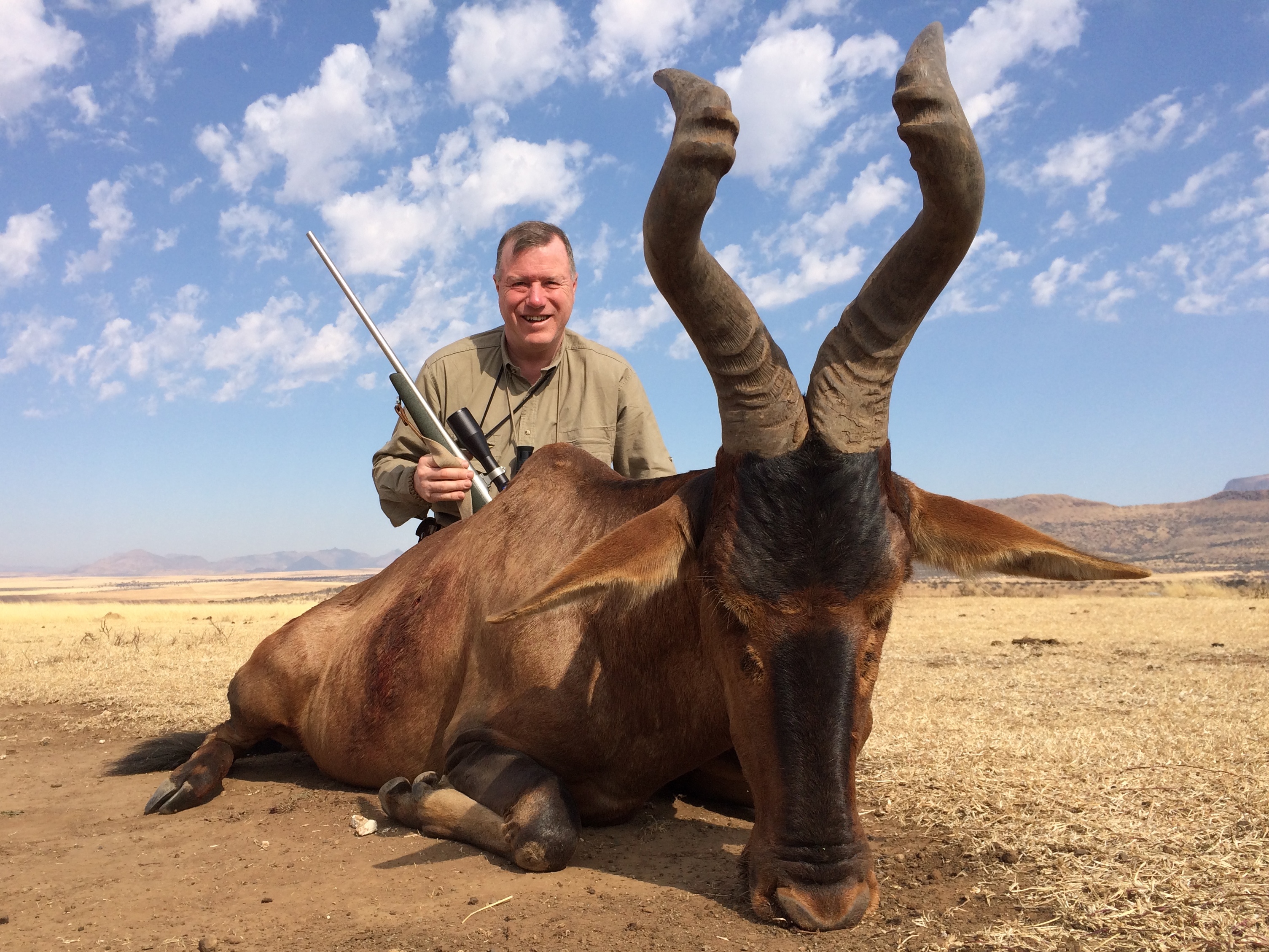 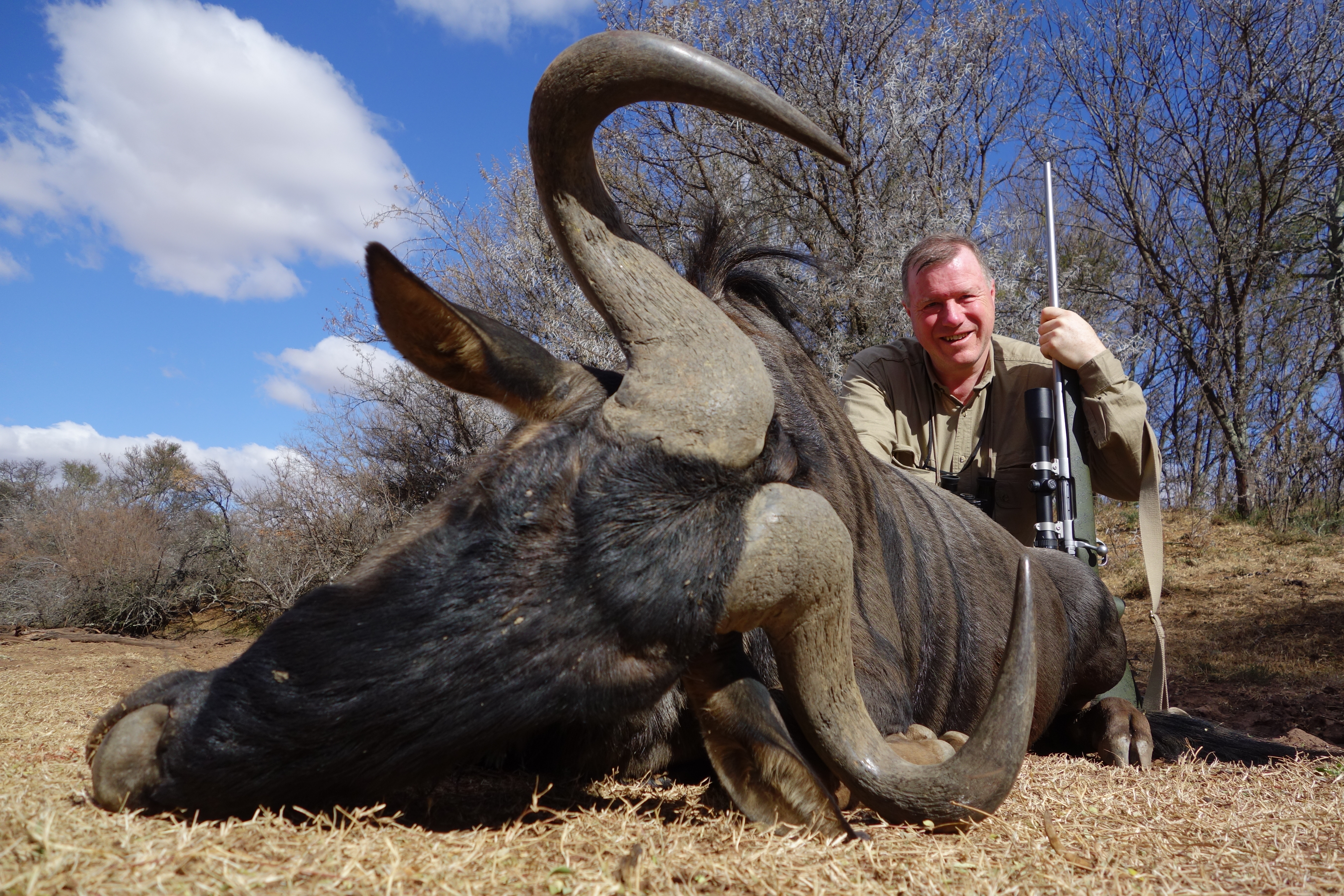 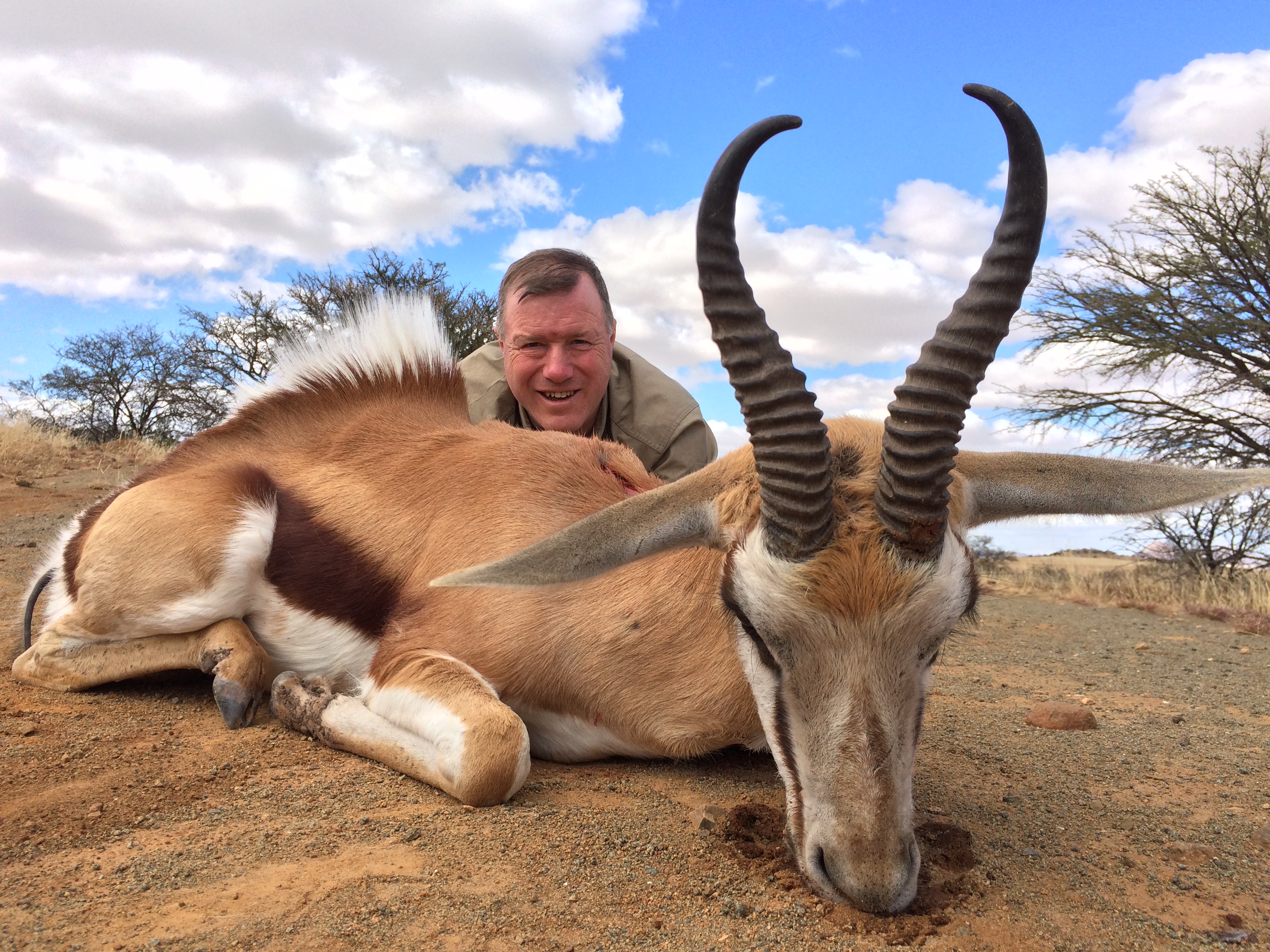 A nice common Springbok. Nothing exceptional here, but a good representative specimen of an old ram with mass, worn out ridges and tips. 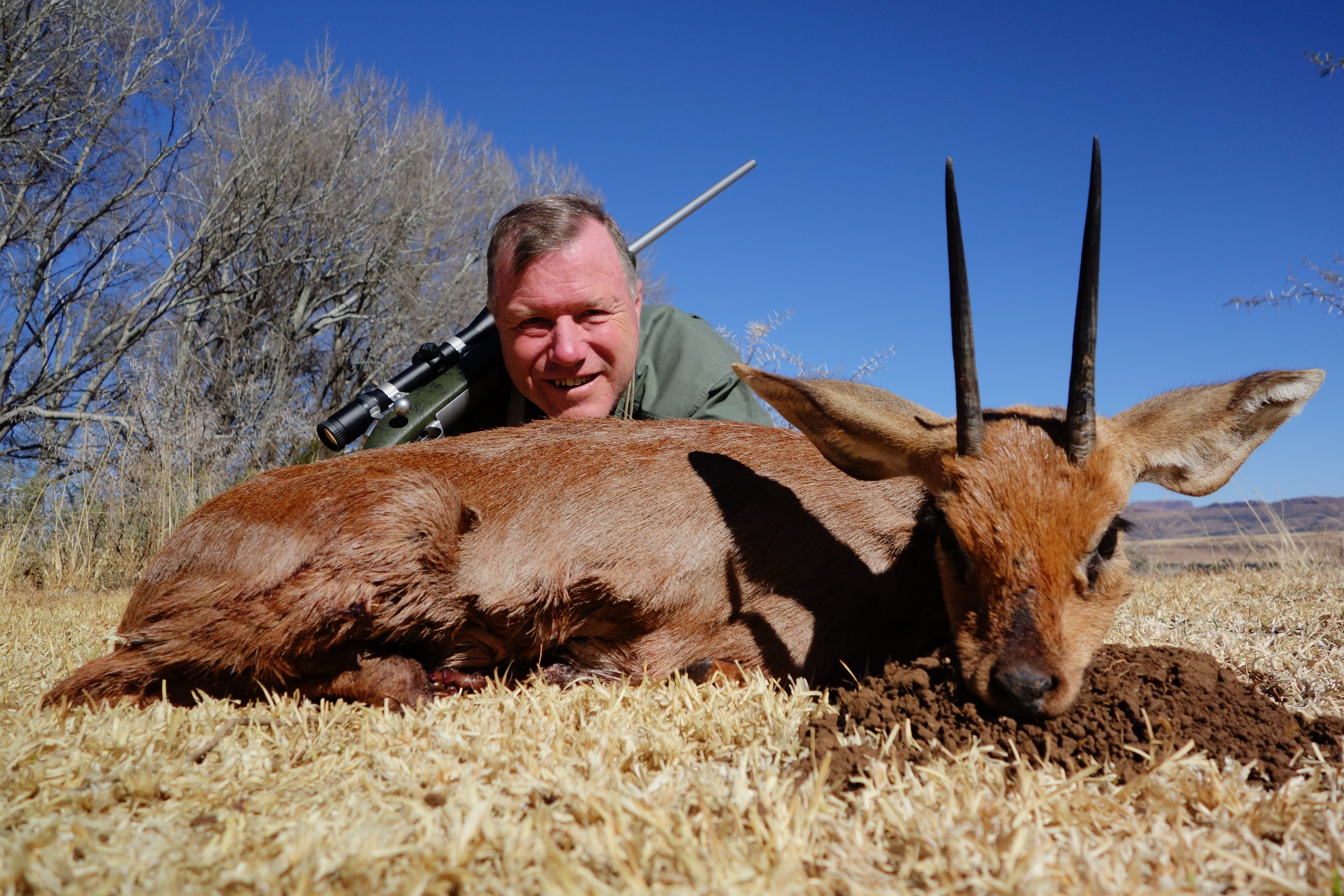 This may be the smallest of the animals on this hunt, but it is likely the biggest trophy. Incredible length, secondary growth, etc. One does not shoot a Steenbok that good everyday... 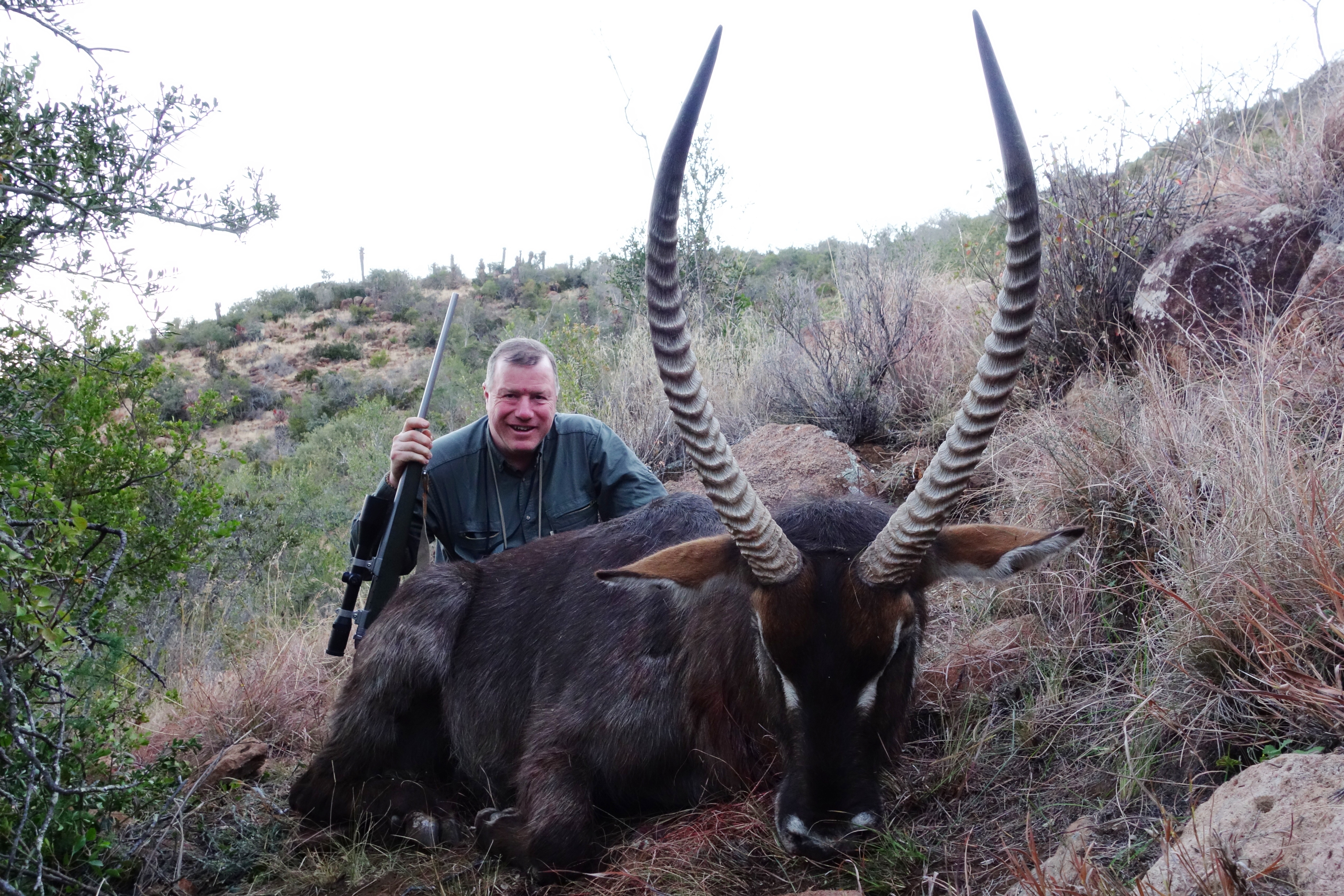 An amazing Waterbuck. Mass, endless length, character. What else to wish for? When the one you shoot makes the one in the lodge look small, you know you are onto something... 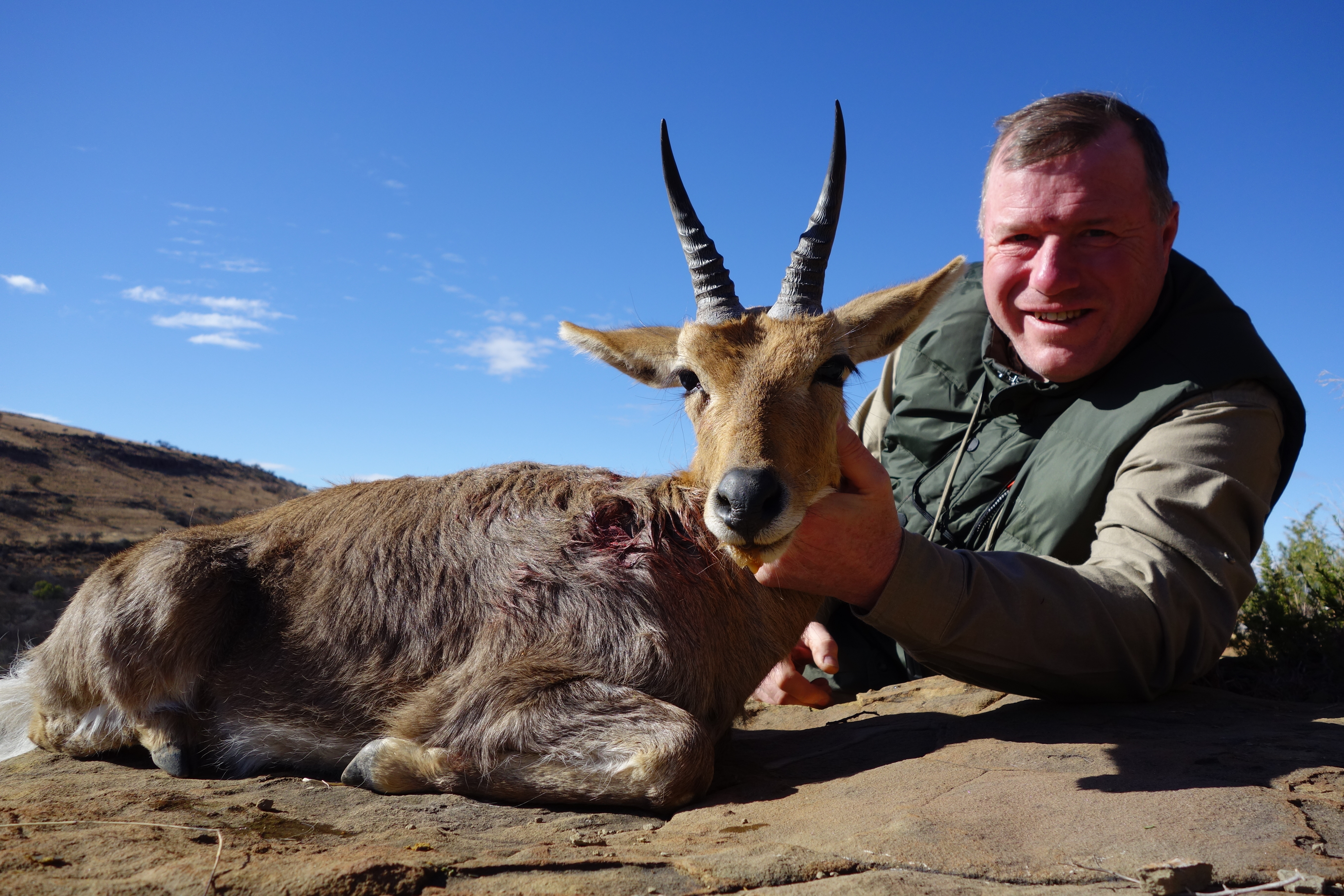 A very, very nice Mountain Reedbok in its winter coat. Heck, it snowed that morning up there! (Hint: bring something warm if you hunt Eastern Cape in August, which is winter). Great length, solid mass, wide secondary growth. A great trophy. 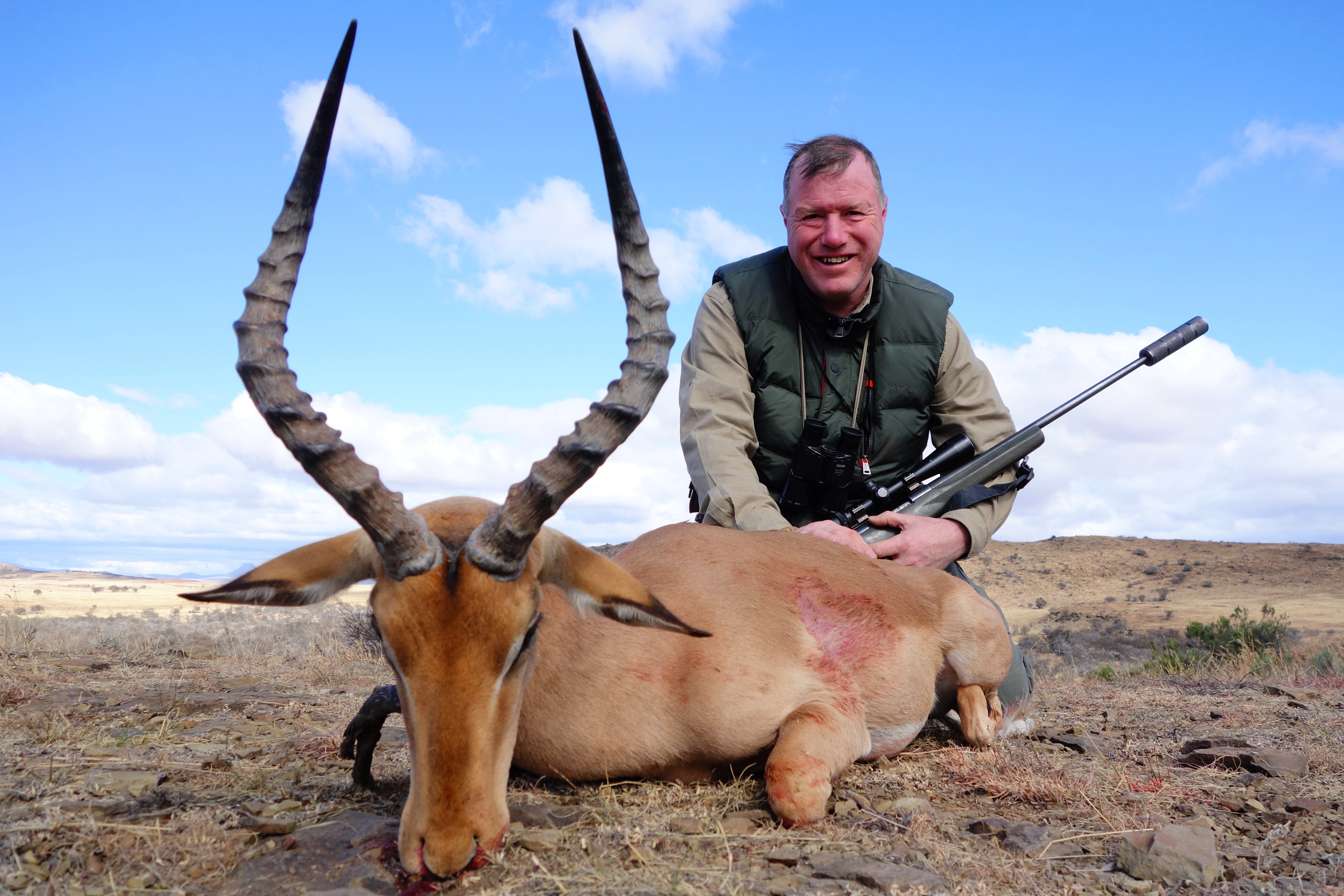 A typical Impala. Maybe a bit young, or imperfect genetics: it could be wider. But a nice one nonetheless. 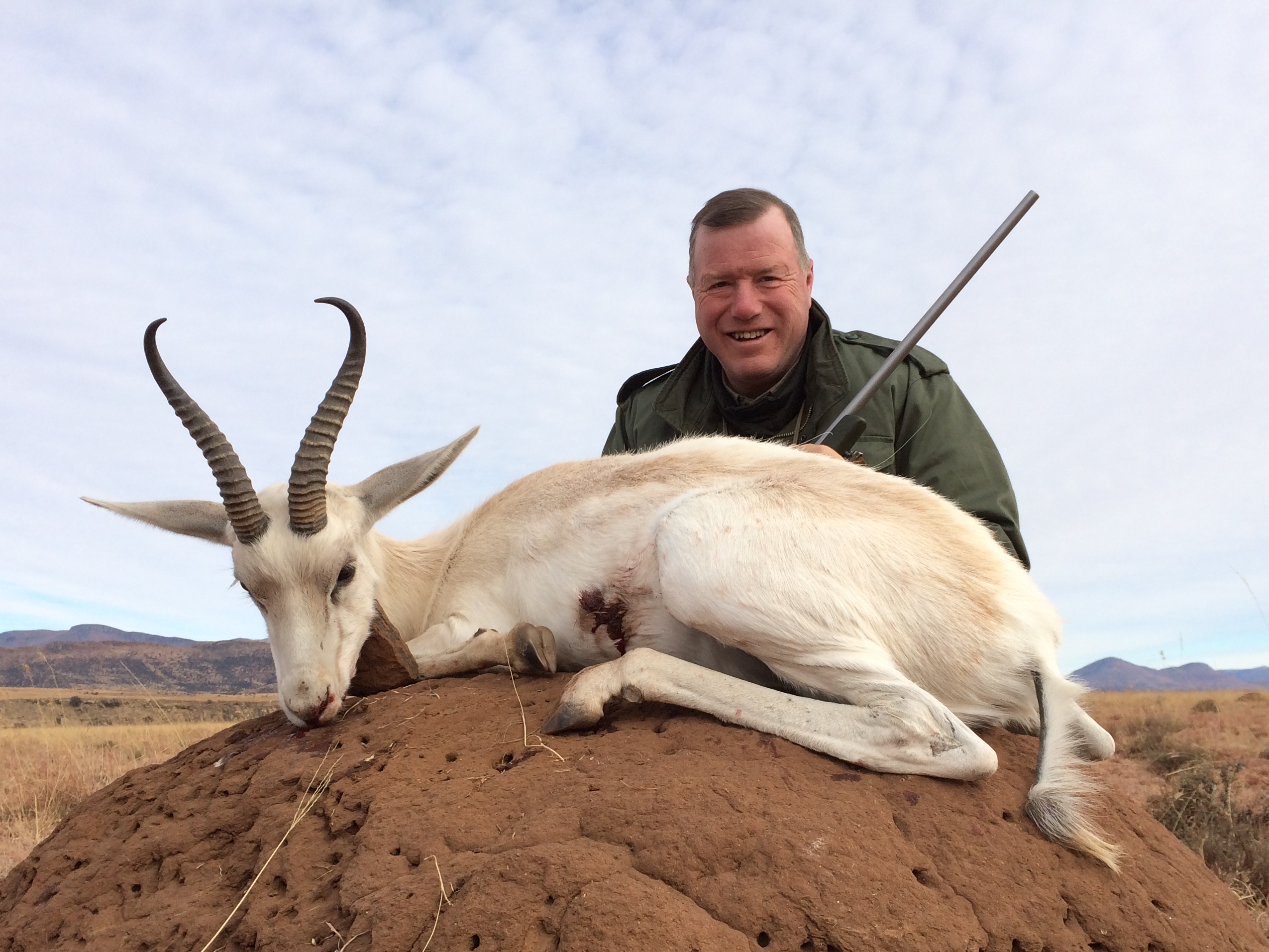 A very nice White Springbok with a solid set of horns. It is not 100% snow-white, so it came as a cull animal to improve the genetics of the herd. I prefer "European" skull mounts, so the cape color was not very important to me. 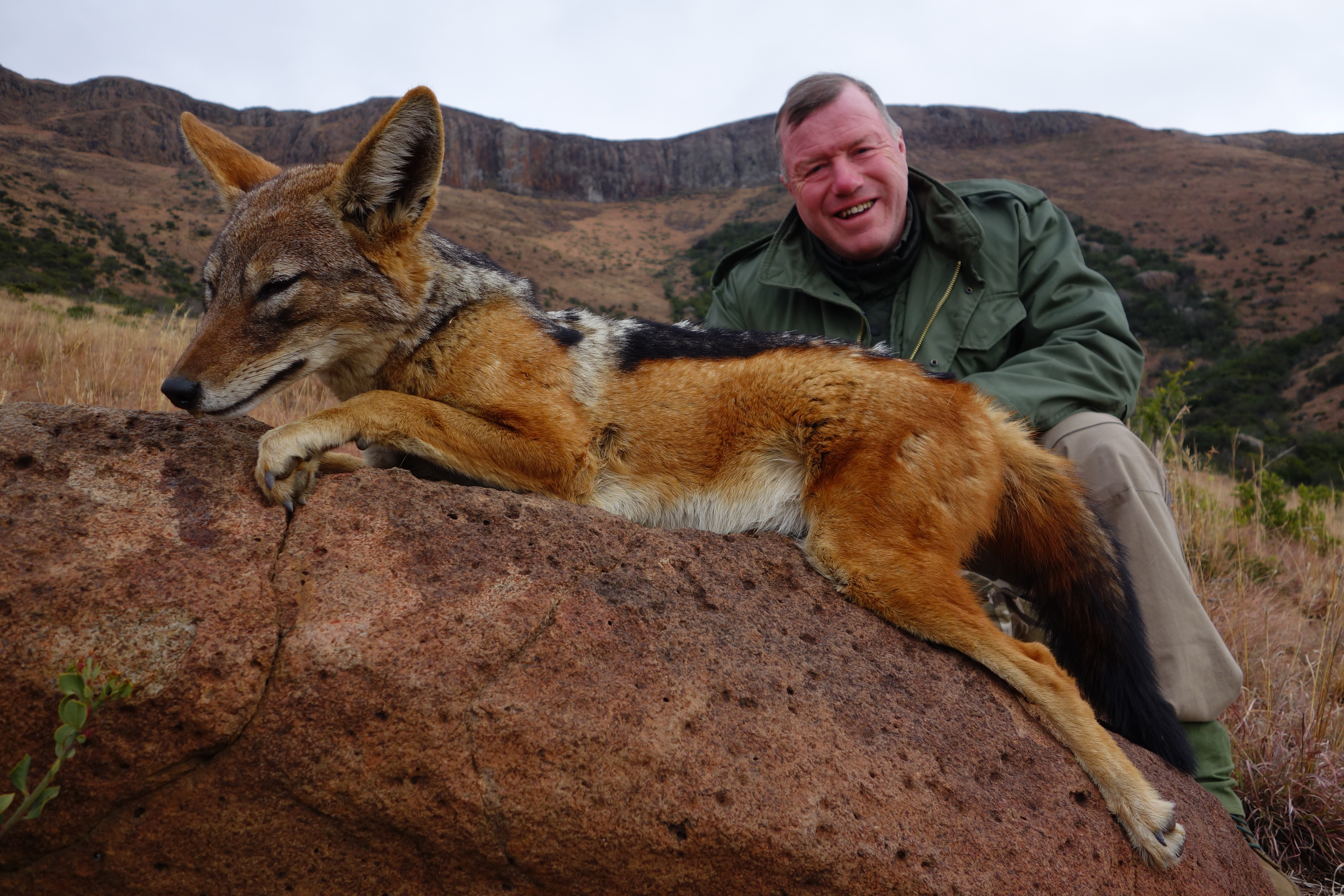 As if I had not been lucky enough, we came across this nice Jackal. They prey on various antelope fawns, so this was a management animal.

And because I ended up being finished with my trophy list 2 days ahead of the end of my hunt, Greg Harvey "asked me" (you should read: 'very generously offered me') to shoot a couple of cull animals, selected for poor health or defective genetics.
Now, I know that to many folks 'cull hunting' in Africa means 'shoot whatever female you see,' and sometimes from the truck, but in my European upbringing cull hunting is the most difficult hunt for it is much more difficult to identify a defective animal (health or genetics) than it is to identify the biggest bull.

Thank you Greg, I hope I did not disappoint... 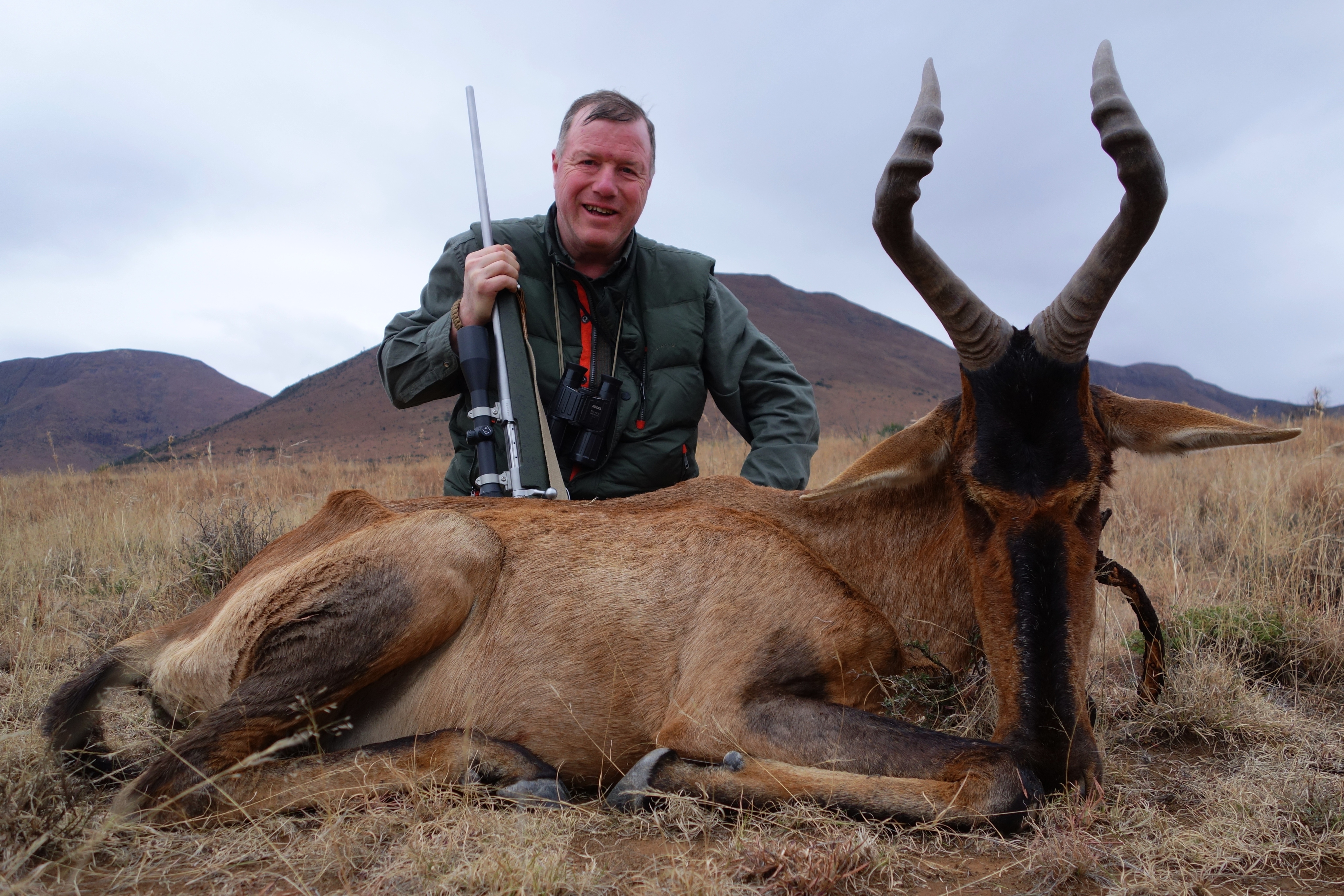 You will not often see a Red Hartebeest in such poor health condition, with literally every bone sticking out. She was so cadaver-looking that it is a wonder that she was still alive. 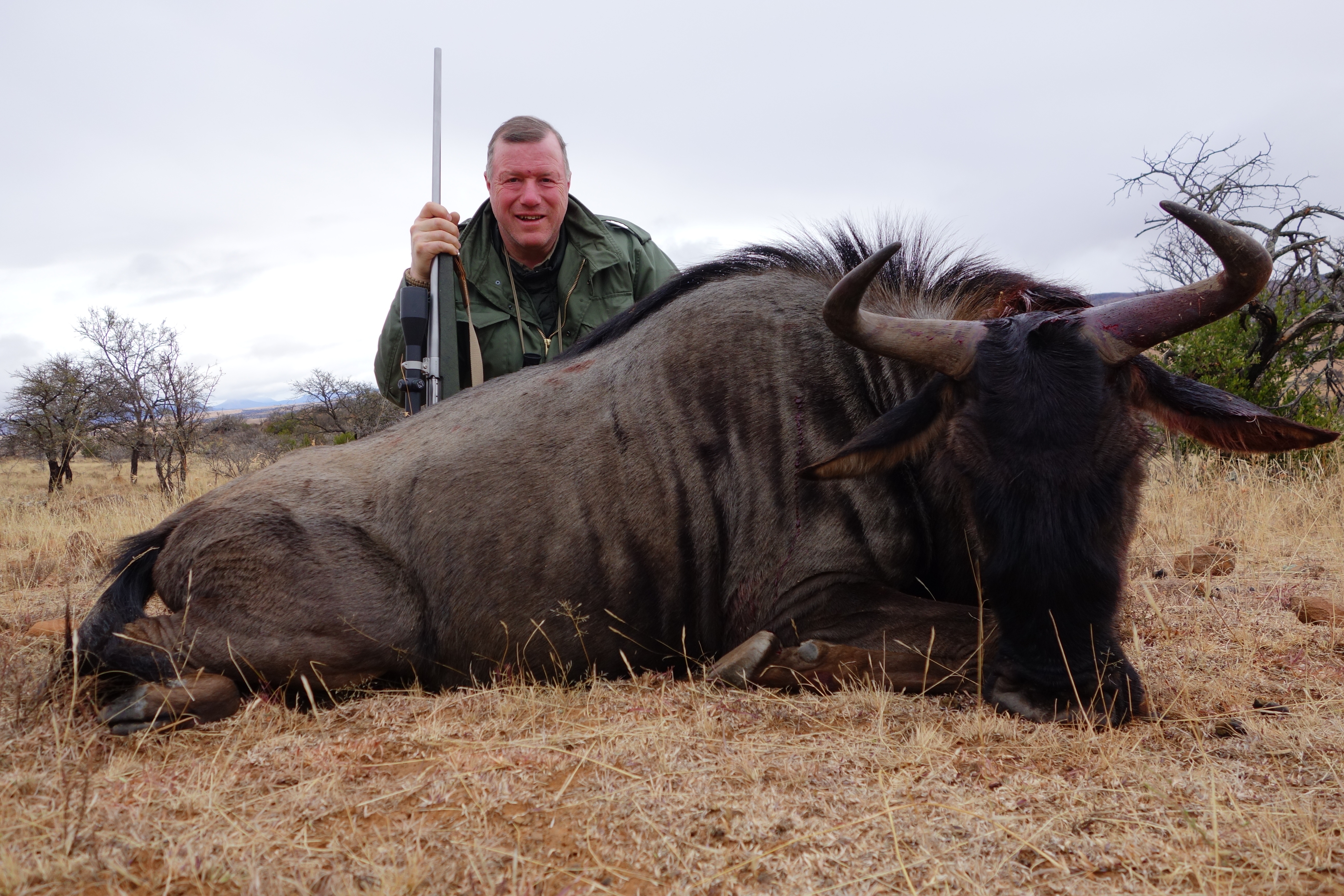 The horns on this fully mature female Blue Wildebeest are not what you want in the reproductive gene pool when, as Huntershill want, your objective is to provide top quality animals. It needs to come out.
Last edited by a moderator: Aug 26, 2018

Looks like one heck of a trip so far. Congratulations!
"And the people bowed and prayed to the neon gods they made" Couple of hippies
"The two most powerful warriors are patience and time" Tolstoy

So, this was Huntershill for me. Enough said?

My name is Pascal Berlioux. You can reach me and ask me any question you want about my experience with Huntershill. I will be happy to answer.

I will post additional reports on the Huntershill facilities; what to bring to a hunt at Huntershill; a few things I learned there despite already 40 years of hunting; etc. but I can already tell you: I am going back!

You should see the Sable, Lechwee, Tsessebe and Cape Buffalo Huntershill have... And Head PH Jason Olivier has on his own property not far away among the best Vaal Rhebok in Africa... And Jason also has a couple hidden spots up his sleeves for monster Nyala... And John Blaine, on whose property we hunted the Bushbuck has trail camera pics of Gold Medal Bush Pigs... All of which you can book in a neat turn-key package with Huntershill.

Plus an endless list of other species that you can check at http://www.huntershillsafaris.co.za/
Last edited: Aug 25, 2018

This part, Part 2, will show you the facilities and accommodations which were five stars, at a surprisingly affordable daily rate.
Last edited by a moderator: Aug 25, 2018

SOUTH AFRICA: Has Anyone Hunted With Huntershill Safaris?

SOUTH AFRICA: A Return To Huntershill Safaris - Even Better Than Last Year!
3 4 5

SOUTH AFRICA: Family Safari At Huntershill Safaris (If my wife & kids can do it so can yours!)
2 3