Howard and Magi from Breckenridge, Colorado returned for their 4th annual trip with Karoo Wild Safaris. Their annual Easter visit has become a fixture in our season and one which we always look forward to. After last year's trip Howard had shot 41 African antelope with us. Howard, Mitchell and myself have always clicked as a hunting trio and although Howards hunts have spanned 4 years, the time seems to have flown by at a rapid pace. I can remember each of those animals as if it was yesterday and am proud to say that we've never lost an animal hunting with Howard.

Howard brought his Savage 243 and Savage 7mm Remington Magnum for his 2019 hunt.

First hunt up was springbuck and we spent the first two days searching for quality buck. Mid morning on the first day we spotted some black springbuck bedded down in the open. There was enough cover to stalk within shooting range. They stood up and grazed away from us but we followed and using some bush as cover were able to get within 100 yards of an old ram. Howard's 243 barked and the buck ran a short distance before he expired. We searched a large open plain on the second day and saw several large herds of springbok. There was minimal cover and getting within effective range proved difficult. We drove along the edge of the plain and spotting a beautiful lone ram and we were fortunate to get a large clump of bush between us and the ram. Mitchell dropped us and drove off. Positioning the bush between us and the ram we were able to close the remaining 300 yards unseen. We didn't want to emerge from behind the bush and risk being seen by the ram who was facing our direction. After a patient wait, the ram grazed into our field of view and Howard made a heart shot to claim a fantastic trophy. 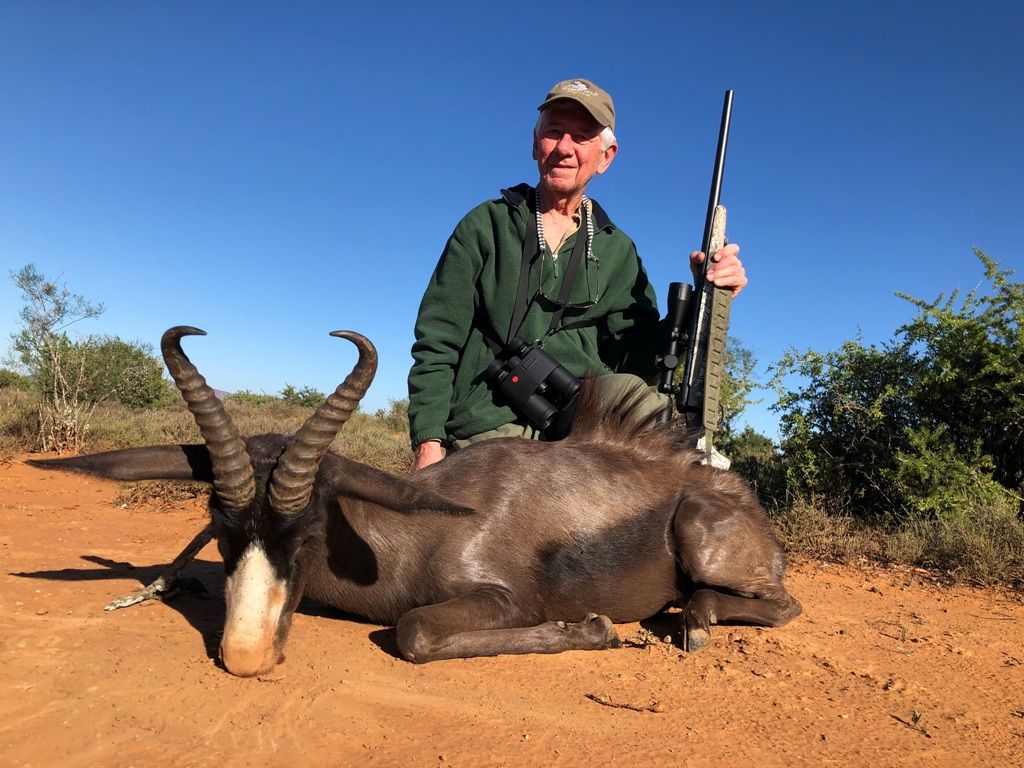 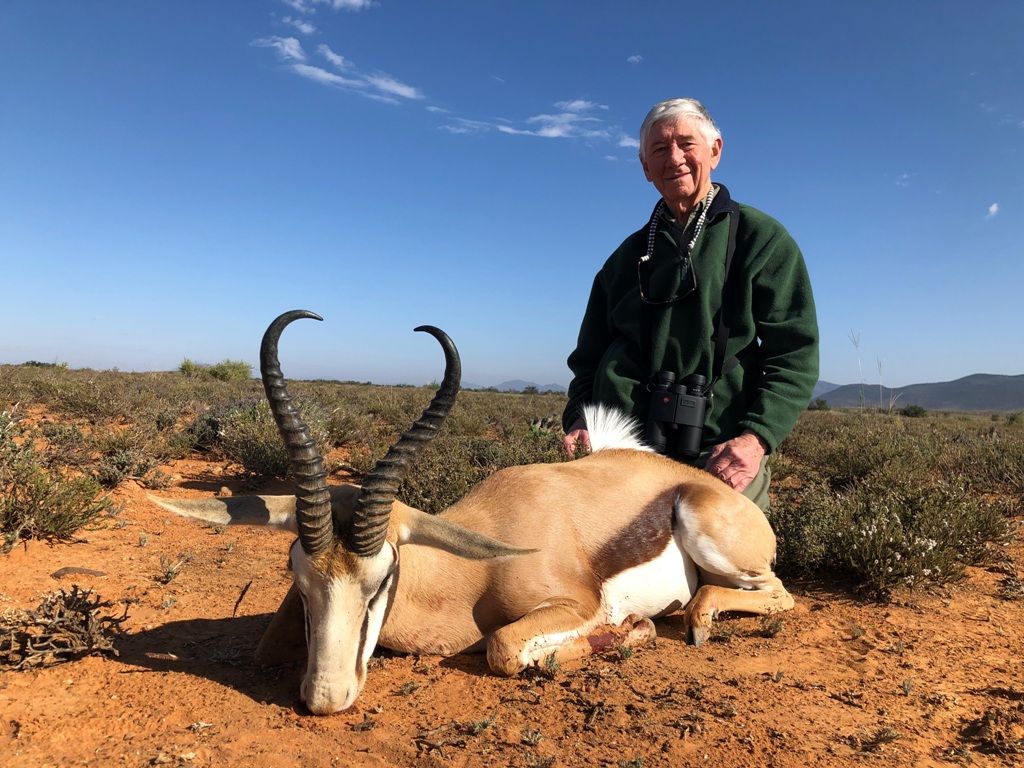 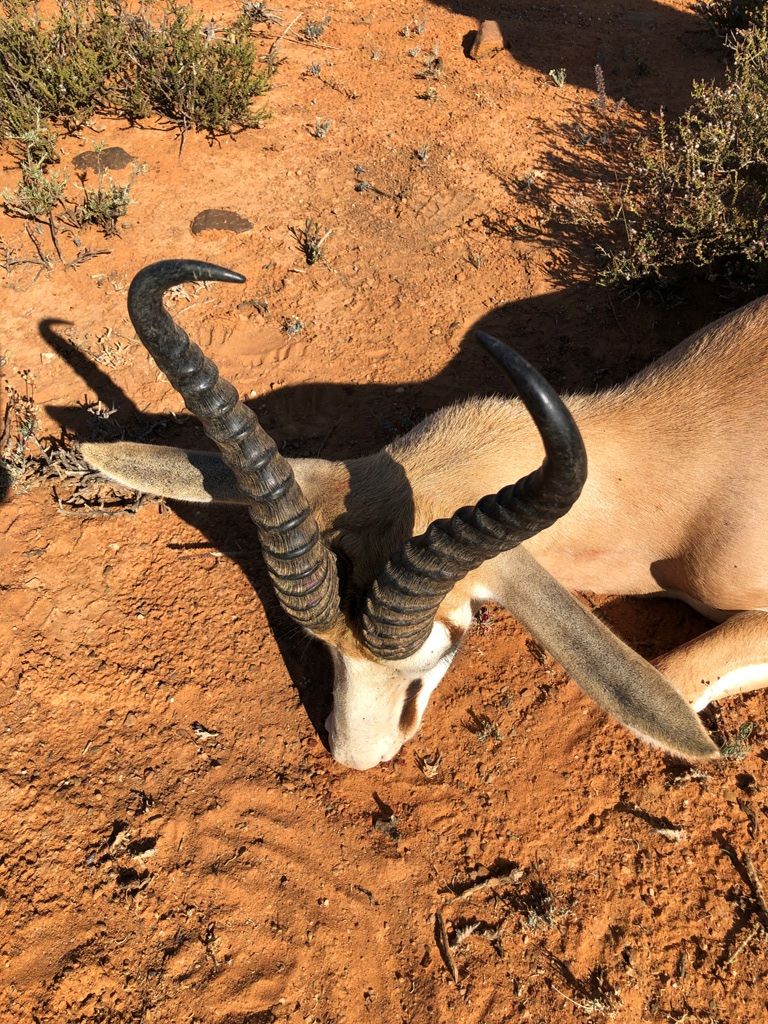 Our hunt moved north on the morning of the third day. We had planned to spend two days hunting our concession here and then moving to the Northern Cape Province to hunt Roan and gemsbuck. We were surprised that morning when we bumped a nice waterbuck bull close to the river around our cottage. We hurried out the vehicle and set off on foot. The waterbuck was in a hurry but we had the advantage of height and had an unsighted view of him from the riverbank as he moved upriver along the acacia thicket. He paused a couple of times but we were always a little slow and unable to get a shot off. Finally, we saw him enter a large thicket and we had time to set up the shooting sticks. It was a long shot but one I knew Howard could make. After a few moments the bull emerged and moved along the front edge of the thicket. Howard's shot hit hard and the bull appeared to take the shot and crash into the thicket, I left Howard and Michell with the height advantage while I climbed down to investigate. I found the old bull expired. This was Howard's 2nd waterbuck and he was every bit as good as the first one. The afternoon was also fruitful. We saw three hartebeest bulls coming down a large mountain slope. Using the bushline as cover we stalked diagonally up on them. Howard's first shot appeared to miss as did his second and third. The hartebeest hardly reacted to the shots and there was no familiar thump of the bullet hitting flesh. The bull turned and ran uphill and started staggering before collapsing. On closer inspection, all three shots had hit on or behind the shoulder and has passed through the hartebeest with hardly and expansion. Just a hard bullet I guess. 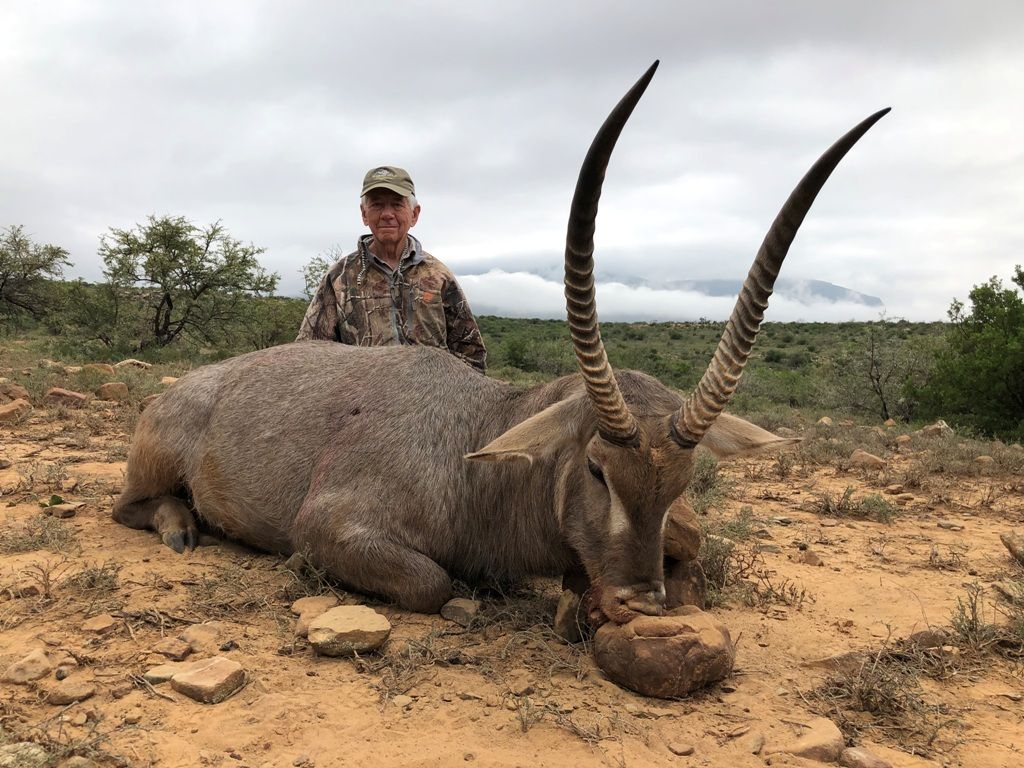 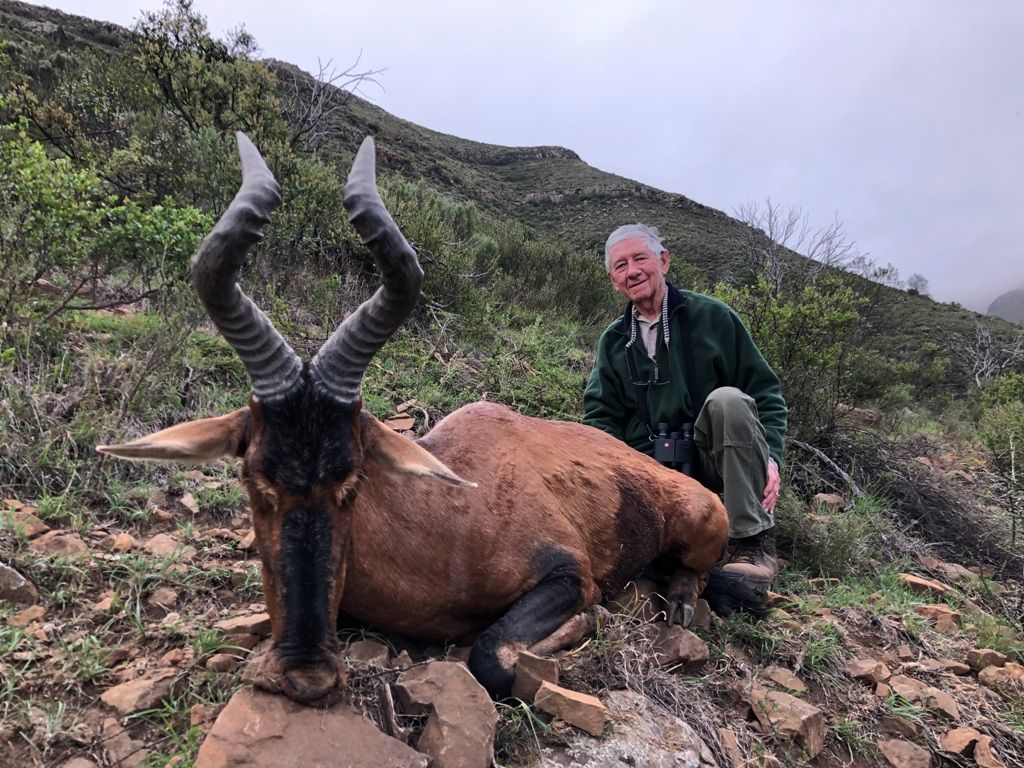 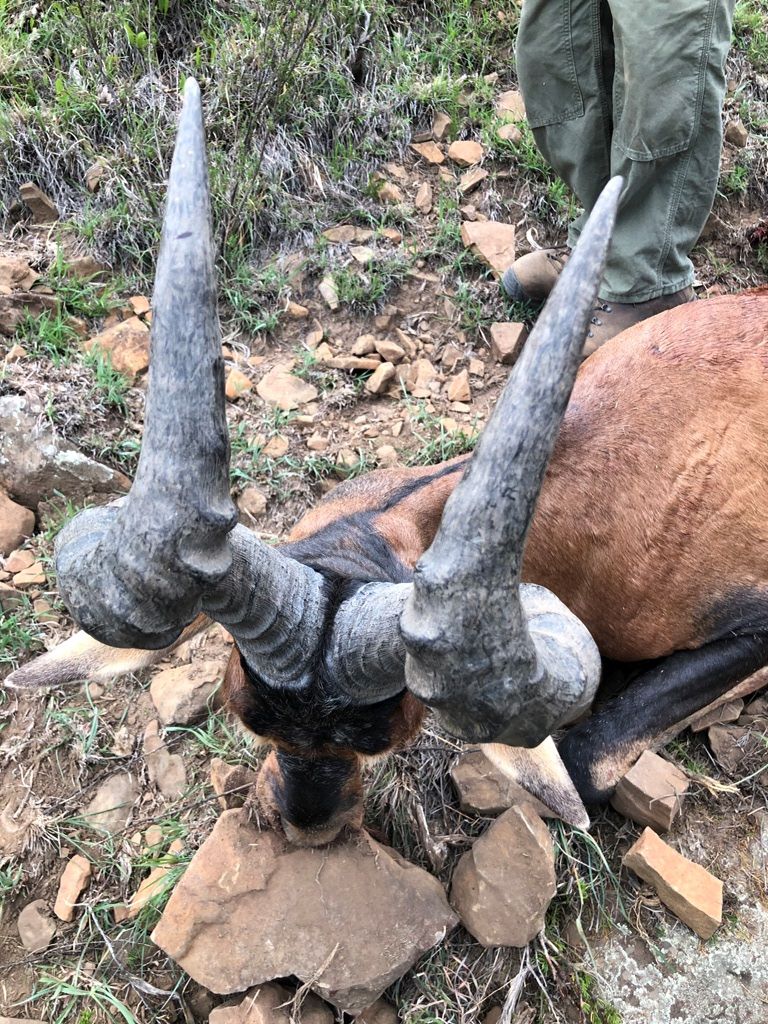 The next day was also successful. We drove up a mountain track to get a birds eye view of the crater-like valley below. In the distance we sighted a grey line of eland climbing out the crater floor. They must have been three thousand yards away but their large outlines were highlighted against the dark green bush. We drove in their direction, parking the vehicle a few hundred yards above them hidden by a ridge between us and the eland. We soon got into a position above them and I knew at this point we had a terrific chance of getting one. They were in the bush below us, the tall tree canopies making a shot difficult. We exercised extreme patience in not forcing the situation. Once they grazed out naturally of their own accord it was easy to identify the big bull in the herd and again Howard made another quality shot. Howards second eland was his 46th African antelope. 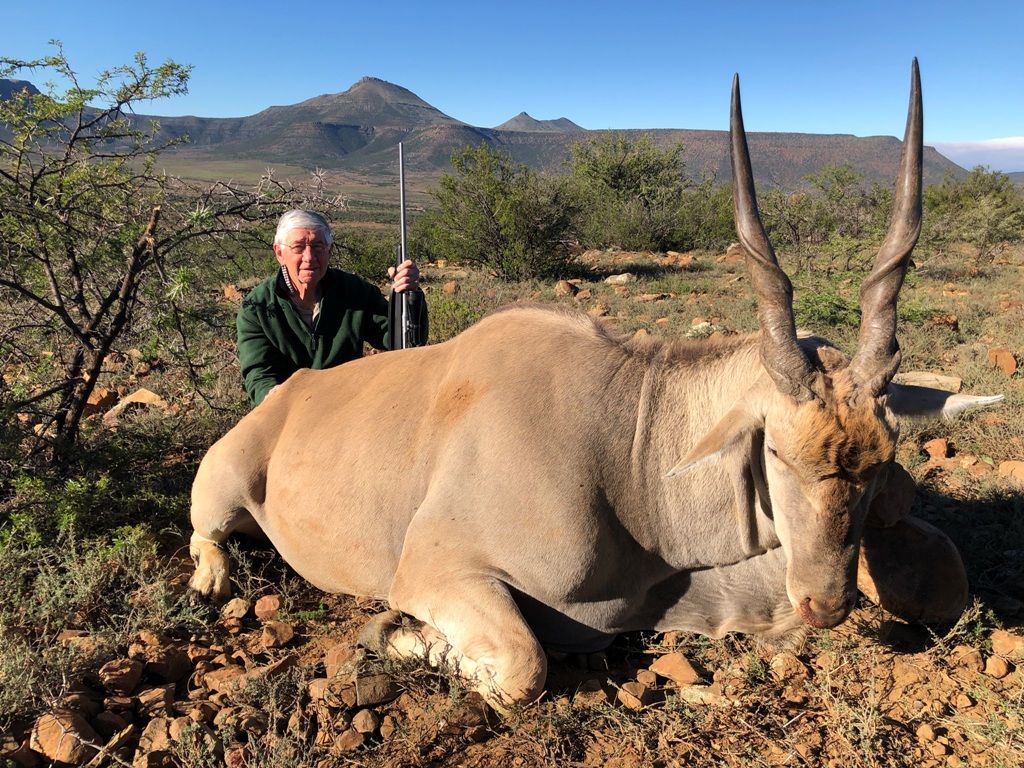 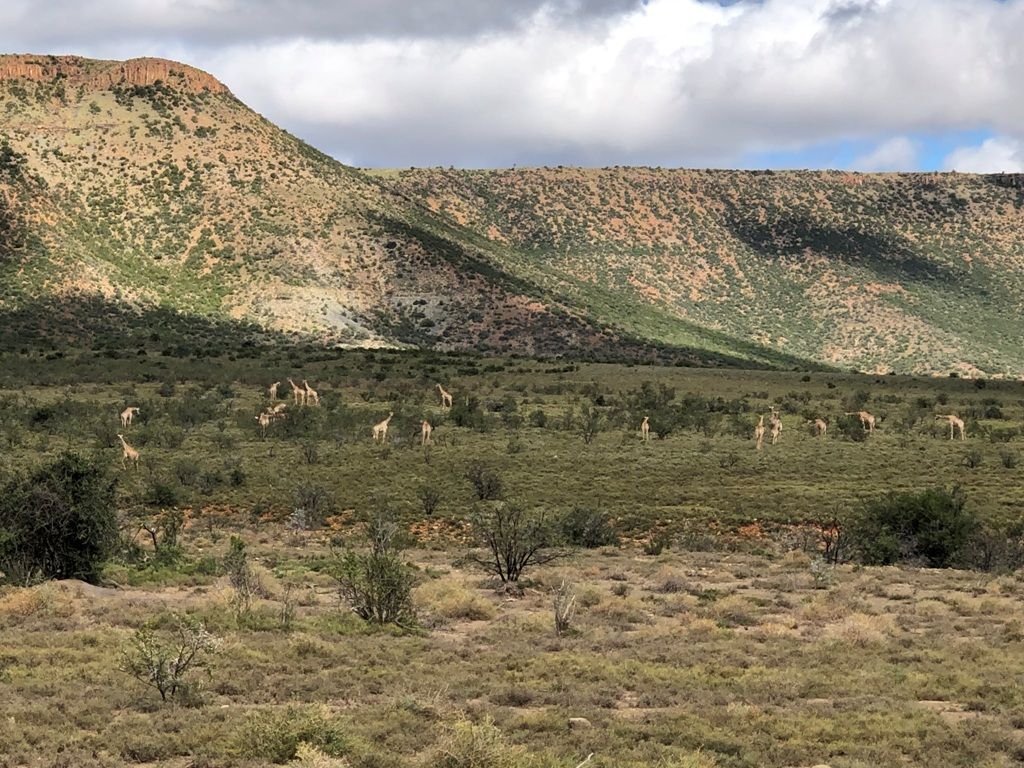 We took a slow 3 hour drive to our concession in the Northern Cape Province the next morning. After lunch we set off in search of roan antelope. The roan almost proved to be the easiest of Howard's 46 kills but in the end may go down as one of the most difficult. We spotted him from a distance and made the perfect stalk. But seventy yards out, he was ours for the taking but the wind shifted 180 degrees and he was off over a low ridge on to the next open plain. We followed him, moving to our right to stay out of his wind. Several failed stalks later, we found enough cover to get within acceptable range and Howard made a remarkable shot, the roan running a short way before expiring in a clump of bush. He was a very old bull with worn off tips. 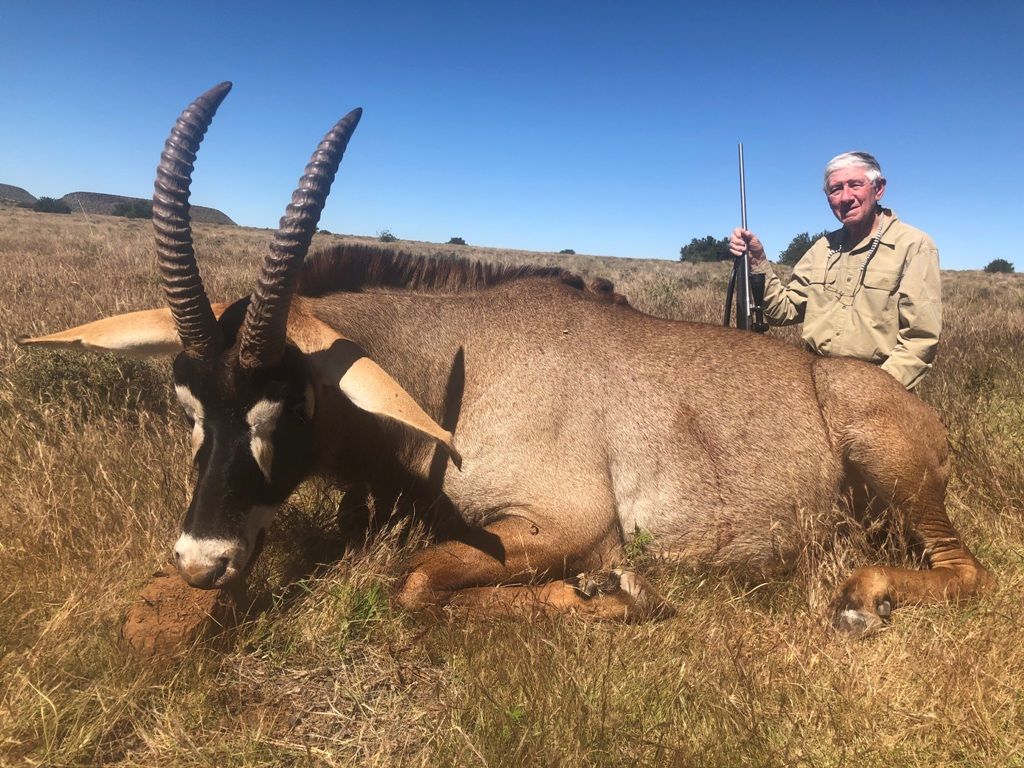 That afternoon was gemsbuck hunting time. Howard hunted an exceptional 40 inch gemsbuck cow on his 2017 hunt with us and the goal this time was to hunt a gemsbuck bull. We saw several crossing an open plain, not a bush in sight for several hundred yards. We just followed them, putting in the hard yards waiting for the terrain to change and them to give us an opportunity. An hour later they moved behind a rocky outcrop in the plain and we knew we had a chance. We moved the other way round the outcrop and came out 200 yards behind them. Biding our time, we identified several bulls in the twenty strong herd. A difficult shot presented itself where only the head and the neck of the bull was visible. Howard calmly placed the bullet centre neck and the bull collapsed. A very wide horned bull gemsbuck an a fun stalk and well deserved trophy. 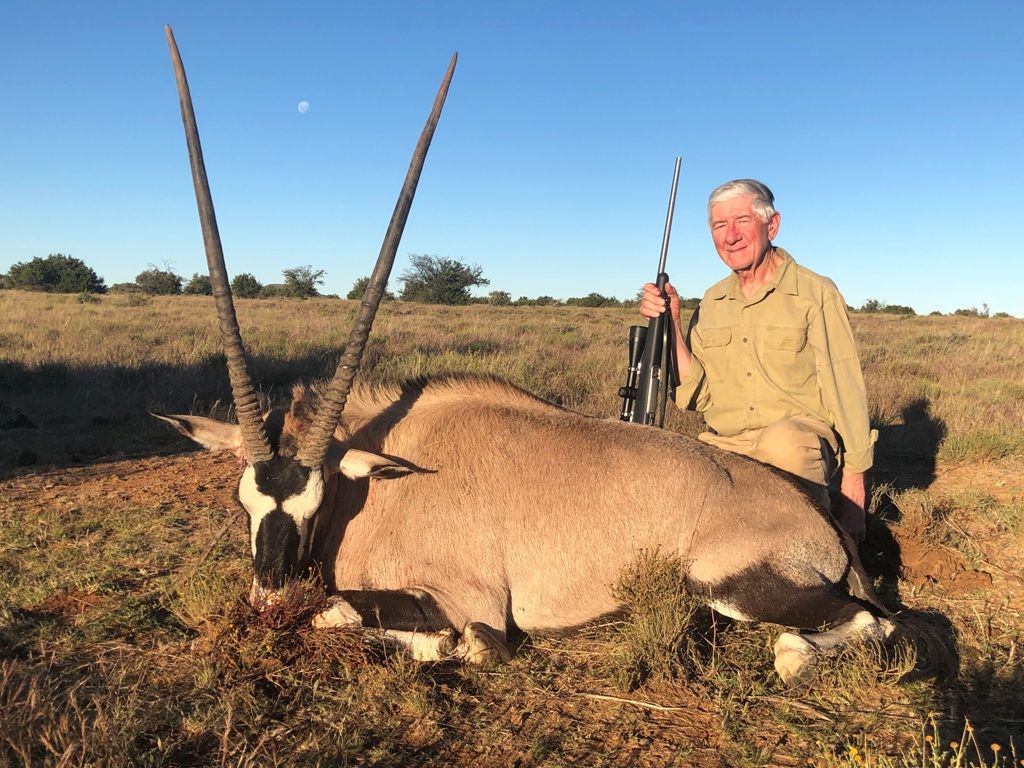 We returned to Karoo Wild Lodge the next morning. We took the leisurely route taking in several sights along the way.

It was fitting then that Howard shot a kudu bull two days later to take his 50th African antelope and his third kudu. Patience and faith are the hallmarks of any successful kudu hunt. This time was no different. Well done Howard, it's been a journey my friend. Mitchell and I look forward to the next 50 and all the memories and moments that come with it. 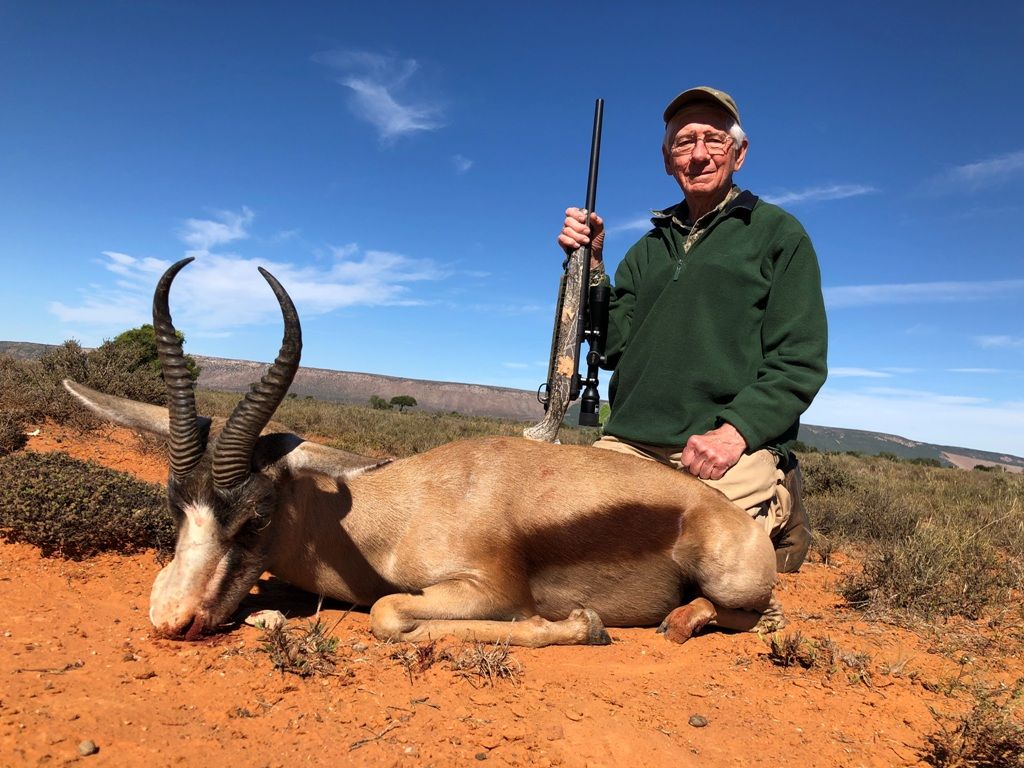 We bid farewell to our friends and are excited to be seeing them again in April 2020. 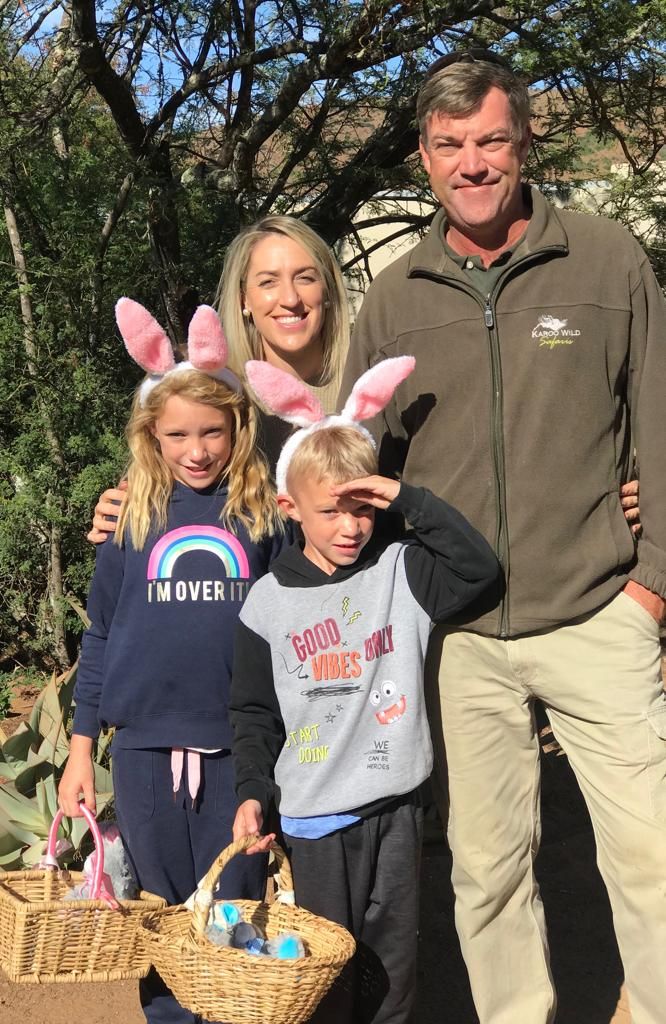 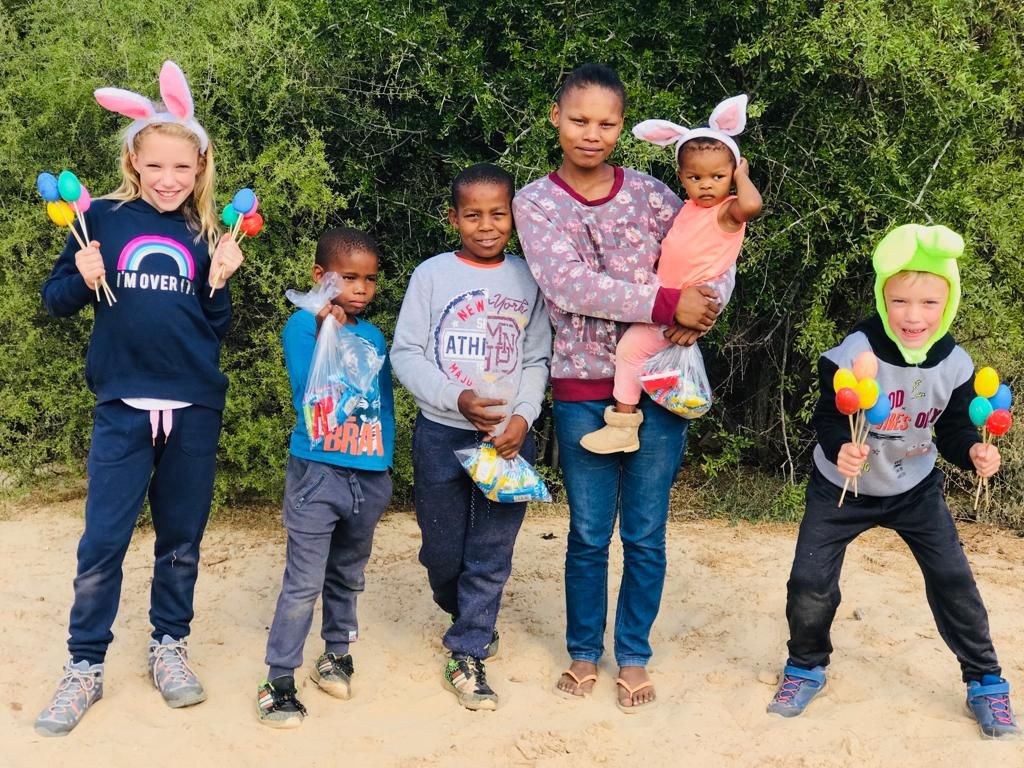 Thank you Victor and Lindsay for another great visit to Karoo Wild Safaris. The hospitality, accommodations, food and hunting were just outstanding. Magi enjoyed the excursions with Lindsay and the overnight visit to the game park where she got some excellent wildlife photos. I enjoyed the long and challenging stalks, especially when they resulted the high quality trophies we took. We are already excited about returning for our fifth visit next April. All the best. Howard and Magi

Thanks for the interesting report! Congratulations Howard! The animals are really special. I think an annual trip is a great idea for all of us! My brother is in the east cape right now. Again congratulations

Great hunt. Thanks for sharing it with us
"There is nothing so good for the inside of a man as the outside of a horse."- Winston Churchill

Congrats to the hunters and thanks for sharing!
John 3:16
You must log in or register to reply here.