Arrived home August 26 after spending 12 days at the Mpunzi Lodge hunting with Marius Goosen of KMG Safaris. I did all my research right here on AH and would like to extend my thanks to everyone who answered my questions and took time to post hunt reports.

My traveling companions were my wife and daughter age 12 as observers and my son 8 would be hunting.

We drove four hours to NYC and spent the night in a hotel with shuttle service to JFK. We flew JFK to Johanesberg then a short flight to Port Elizabeth where Marius was waiting to pick us up. We made it to camp with just enough light to check rifles then back to the lodge for dinner, drinks and bed. It worked out well getting there late as we were tired enough to fall asleep on local time and suffered no jet lag. 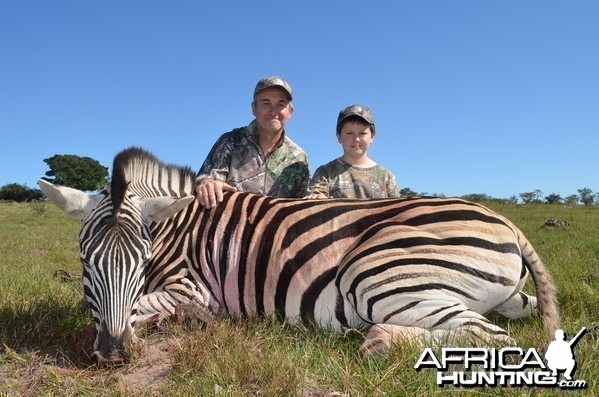 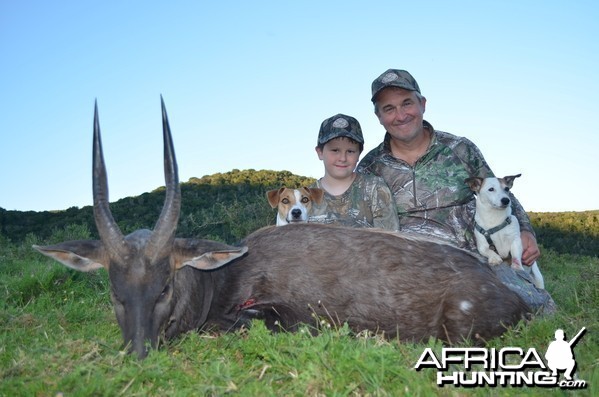 The following day we spent chasing Impala and finally caught up with this ram. Marius estimated we covered about 10 miles. My son kept up all day like a trooper. 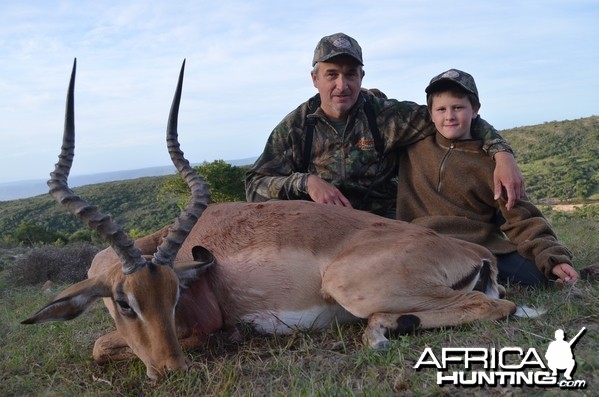 The next day was his turn and he took his first big game animal a nice Blesbuck. Marius and I gave him the warpaint. This was a great day for sure. 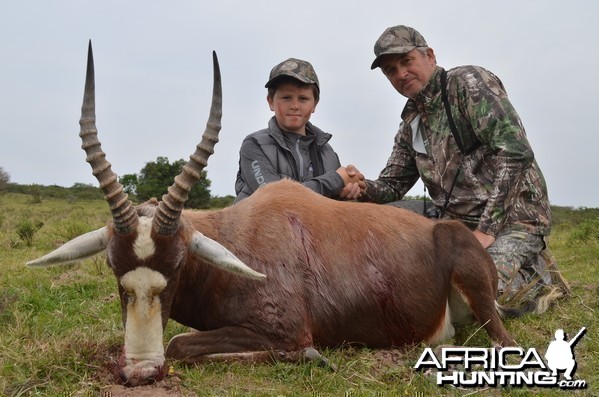 Then Marius's wife Kim took the family shopping and sightseeing. My kids had fun and bought sneakers and some back to school clothes.

Marius and I spent the day looking for Waterbuck spotted this fine animal and finally took him the next day late in the afternoon.Very impressive animal found on the hillsides in some really beautiful country. The shot was 250 yds across a valley bottom. 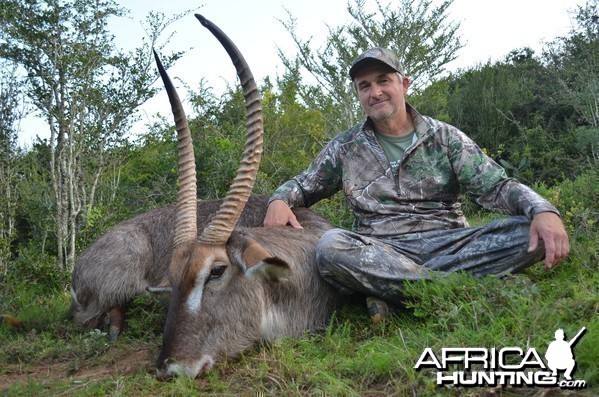 It seemed like everything was going according to script until we came to the Kudu.We saw plenty but nothing Marius deemed a shooter. Close enough that,on walking out after a full day of hunting ,Marius said he might have made a mistake on passing on one we had been watching.He said that he figured I would probably only shoot one Kudu so he would like it to be a good one and we decided to hold out even if it meant going home without one.
On our last hunting day after five and a half days I took this bull that I am very happy with and Marius was no doubt relieved. 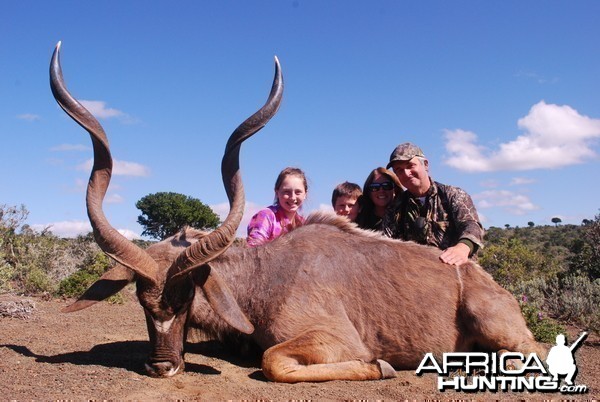 Next up was my son who took this Warthog 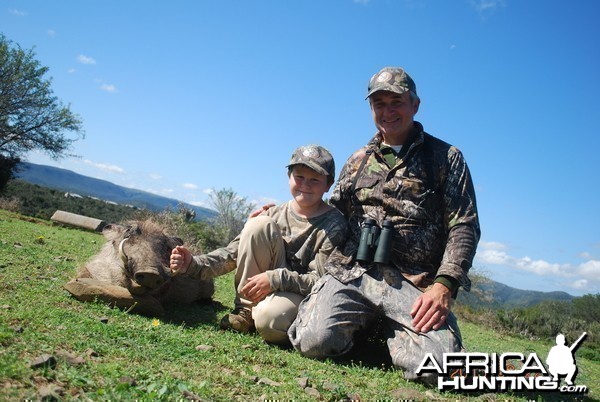 Marius shares Mpunzi Lodge with another PH named Louw.My son was invited my Louw's sons to go small game hunting and he took a very interesting creature called a Springhare.Half rabbit half Kangroo.

I thought it was really great they included my son and just goes to show how nice these folks are.They all have a passion for hunting and want you to have a great time.I love this photo. 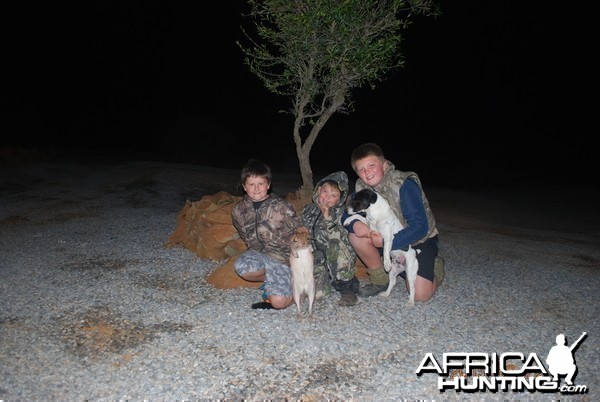 Louw's wife Michelle cooks all the dinners and the food was fantastic.Graham who is Michelle's brother and a new PH himself, takes care of breakfast and lunch.We celebrated my Wife's birthday while we were there and they made a Lamb dinner in her honor followed by birthday cake.

One of the things we enjoyed most about our time in Africa was that unlike a "normal" vacation where you you really only meet other tourists,we got to stay with local people who could share their experiences of growing up and living in Africa.It gave us a wonderful perspective on the country.

A big Thank You to everyone and we look forward to seeing you all again.
Steve
AKA Shoedog

* Hi,
When we were at KMG we met 3 small dogs named Flex and Rigby,(Aka Turd),And Bolt
They were adorable. They were friendly and well behaved, although they were full of energy .
I had a great time!!!!
~ Lauren
Last edited by a moderator: Dec 1, 2016

Shoedog, glad you had a great hunt with Marius, he is the man when it comes to getting good trophy animals. I had my first hunt with Marius and can't wait to get back hunting with him, and the rest of the boys.

Glad you and your family had a great time. Congratulations and thanks for the report.
And here I am, returning to Africa of many faces;.... the sloe-eyed temptress with flowers in her hair who stole my youth and my heart, and left me an old man with a kaleidoscope of conflicting memories of many dashed hopes and some fulfilled dreams. E. Echols

Looks like you put shoe black on that Bushbuck's face. Great color.

Marius really does get the trophies for his clients. If anyone new to African hunting is looking in the east cape they need to look at hunt reports from Marius and others. His trophies are pretty dang big on average. You can definitely see the difference in his quality.

I'm still looking for a bushbuck as all I saw last trip were too young and small.
Last edited: Sep 15, 2015
HUNTERS make importation bans work!

Great hunt and great report. I think the three young men in your last photo must have had a wonderful time. My face hurts smiling at their smiles.

Glad to see "Turd" was still making himself loved with the next folks coming along.

Louw & Michelles boys are polite and respectful boys and they sure do like the idea of hunting. Glad your son got to head out with the "James Gang" and do some hunting.

No doubt Marius was relieved.

No second doubts at all, you hunted hard for a nice EC Kudu trophy.
Congrats on everyones success.

Looks like you folks had a great time. Congrats on the fine trophies.

Marius runs a great operation and really works hard to satisfy his clients , I can highly recommend @KMG Hunting Safaris .
on the ocean or in the bush.

SHOEDOG said:
It gave us a wonderful perspective on the country.
Click to expand...

Concrats on the fine critters and great experience. And an extra high 5 to your son! So great you could share the experience with your family!

And don't you think it also gives you a better perspective on our country as well? After our trip to Zimbabwe, my wife still tears up being grateful were born in the USA!

Thanks for the hunt report and pictures!

Great looking bushbuck, at the top of my list next year with KMG. All of the glowing reports from Marius's clients confirms I've made the right choice.
Y'all can go to hell, I'm going to Texas! Davy Crockett

Shoedog, looks like you and the family had a great time with Marius at KMG, thanks for taking the time to share and write up the report. Congrats!

I really love the one where you are shaking your son's hand and he has his war face on! And that springhare is going to be a special mount! We don't all have one of those.

Thanks everyone.
Sandrat and Gemsbok Gangsta you will have a great time and you really have something to look forward to.I envy you that!
Everyone at KMG made it fun for my family

ActionBob said:
I really love the one where you are shaking your son's hand and he has his war face on!
Click to expand...

Yes that photo will be forever in family history-Great day

Thanks for taking the time to write up a report Steve! That Kudu hunt will remain with me for as long as I hunt the African soil. Not sure how many bulls we passed up before we got "the one"
Just look at how rubbed down his neck/shoulders are from the age!

Shoedog what an exciting trip!! Congratulations on all the great trophies and memories. This will be my second trip after hunting Namibia in 09. I'm more excited this time than the first,probably because I know what to expect.KMG looks and sounds like it will be a blast!! Great report and tell you're son that springhare is pretty darn neat..
You must log in or register to reply here.

USN
Hey everyone..rookie mistake here. Packing to leave tomorrow and I have no idea JNB policy for bringing I cigarettes. Yes I know a smoker, plan on taking 4 cartons if able. Any advice please. Will be greeted by Mr X to ease custom’s hassle. Thanks in advance !
Yesterday at 12:22 PM •••

Glade to hear from you and that you have kept me in mind.

I hope all is well and the hunting has been good.

Everything is fairly good.

The 2 fellows that I had lined up for this great hunt opportunity have backed out.

I'm in the process of purchasing a new house and having knee surgery, or surgeries depending on the left knee MRI, hopefully I can get back to Africa as early as 2024.
Yesterday at 11:30 AM •••

266mark
I'm concerned about Australia's indigenous species that are being killed by feral cats. Is anyone aware of any hunts I can joining to go to Australia to take a few shots at feral cats.
Tuesday at 11:27 PM •••