Back in 2006, I left my job in New York and traveled for a year. Several months were spent in Africa. Since early 2017, I've undertaken to record my experiences in a book for the future benefit of my 4-year old son. Some of these stories you may find interesting, as they are hunting reports in a sense. If you'd like to read more, let me know as I'd love the feedback. If this isn't the appropriate forum for this, also let me know!

A lone female giraffe stands anxiously next to a dense thicket of acacia. She’s about 15 feet tall, and her beautiful spotted coat is stained with brown and yellow mucus on the inside of her hind legs. Her bloated abdomen reports that she was pregnant, but we’ve been told that the calf died several weeks ago and is rotting inside of her. She is very ill, and that’s why she has separated herself from the larger herd that grazes off in the distance. Mark and I are here to end her misery.

Earlier today, Mark received a call from Eugene, the manager at the Tsolwana Game Reserve. There was a giraffe that needed to be put down, Eugene told them, as her body was going septic due to the nearly full-term fetus that had died insider her. Eugene had hoped for a stillbirth, but when that didn’t happen a vet shot her with a tranquilizer dart not once, but twice, in the hope of knocking her out long enough to get the calf out. But charged by the adrenaline of an expectant mother, the sedatives had no effect, and now she has stopped eating or drinking. It’s clear that she is suffering greatly, and it’s been decided that the humane thing to do is to kill her. Eugene asked if Mark could do it.

Nestled up against the Winterberg Mountains, Tsolwana is just 20 miles south-east of the small Karoo town of Tarkastad. Though formerly cattle country, after a series of droughts in the 1960’s, the Apartheid government funded a program to reduce cattle numbers at Tsolwana to prevent soil erosion. With the domesticated animals gone, indigenous animals returned in surprising numbers and the area was proclaimed a Game Reserve in 1979. Today, Tsolwana holds a variety of wildlife including zebra, giraffe and even rhino. While Tsolwana had been privately managed for years, just last year the government took control of the property.

We arrived at Tsolwana within an hour of the call and were met by a team of the reserve’s staff and the veterinarian. The vet had seen the giraffe earlier today and determined that even if she did succumb to a third dart and was successfully sedated, her blood was likely now poisoned, and a painful death was now inevitable. He suggested shooting her and offered to oversee the cull.

We set out by truck and it didn’t take long for us to reach the sick giraffe. Standing in the shadow of a nearby Acacia tree, Mark, the vet, several staff and I watch her lumbering brown-tiled figure stand against a deep, blue sky.

The giraffe is only about 75 yards away from us, and she is alert to our presence. I can see her legs quivering, and even from our distance we can smell the death inside of her - a rank and pungent odor mixed with a tinge of sickening sweetness. The vet wrinkles his nose and whispers to Mark his concern that she will flee into the acacia thicket if we move any closer. She has already been traumatized enough, he tells us, and the time for the shot is now.

Mark shoulders his .45-70 double rifle, which he told me earlier today is a copy of an old Colt 1878, the classic buffalo gun that won the American West. For this cull, Mark has chosen a historical American weapon and caliber over his own African traditions. There is a first click, then a second, as Mark cocks the twin hammers into firing position. I hold my ears as he squeezes the trigger and lets the first round go.

The giraffe is broadside to us, and she is hit right above her right front leg in what appears to be a perfect shot to her heart. She falters, falling to one knee and then another before finally collapsing. We approach her on foot and see pink foam bubbling from her nostrils. She is still breathing, and she seems to be straining to lift her gigantic neck and head.

It’s a sobering sight, this dying beast of an animal, and nobody says a word. It’s evident to all of us that we haven’t been just killed a giraffe, but also a mother who is fighting with her last breath to protect what she believes is her unborn young. Mark lifts his rifle and fires the second barrel, putting a round directly into her brain at close range. Her struggle is over.

With the animal now dead, 11 locals – a mix of Eugene’s staff and some local villagers – descend upon the spotted creature with knives in hand. They chatter enthusiastically to each other in their native Xhosa tongue as they make the first incisions into her expansive hide.

“Don’t eat this meat!” the vet shouts to them in both English and Xhosa.

The giraffe had a septic corpse in her belly, her blood was most likely poisoned, and she had been shot up twice with tranquilizers. The smell alone should have informed them that the meat is dangerously contaminated with both man-made chemicals and natural pathogens.

“He is saying they will eat the giraffe and she will taste very good,” Mark translates for me.

The rest of the men continue to work on her corpse.

He just nods his head in agreement.

We leave as they are about to open the giraffe’s body cavity. I hear liquid splashing against the grass, and the giraffe calf is finally free from her mother. 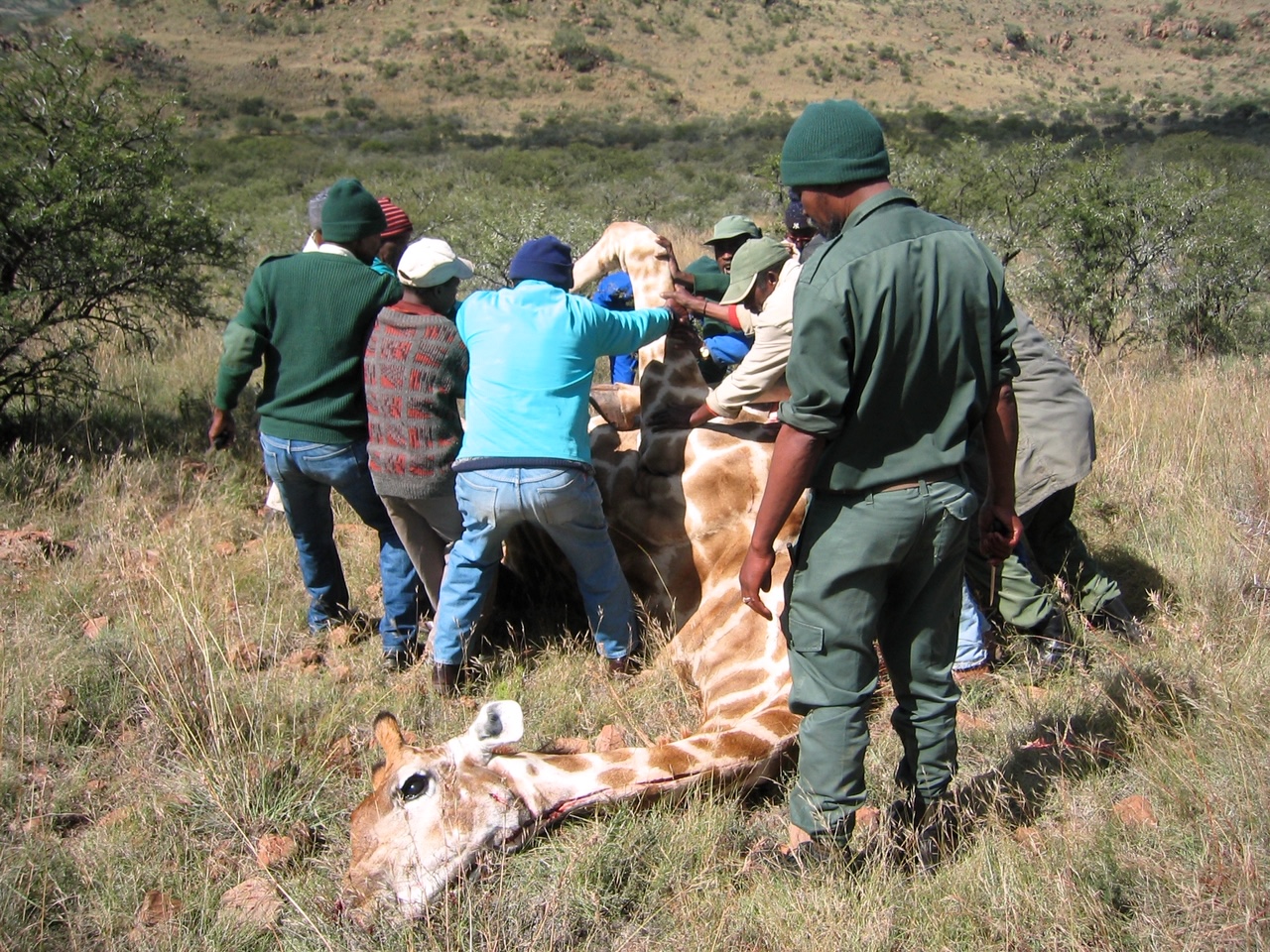 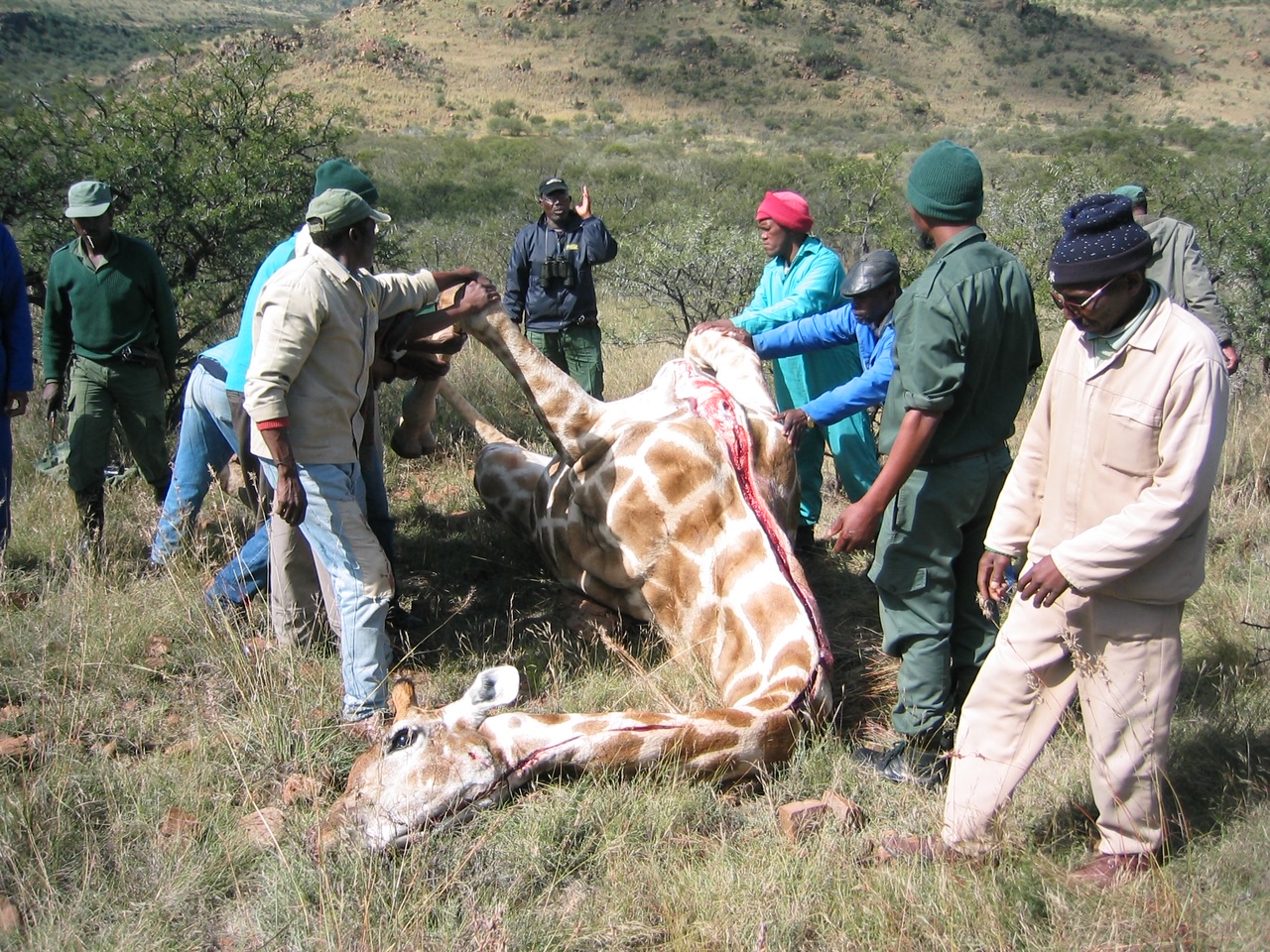 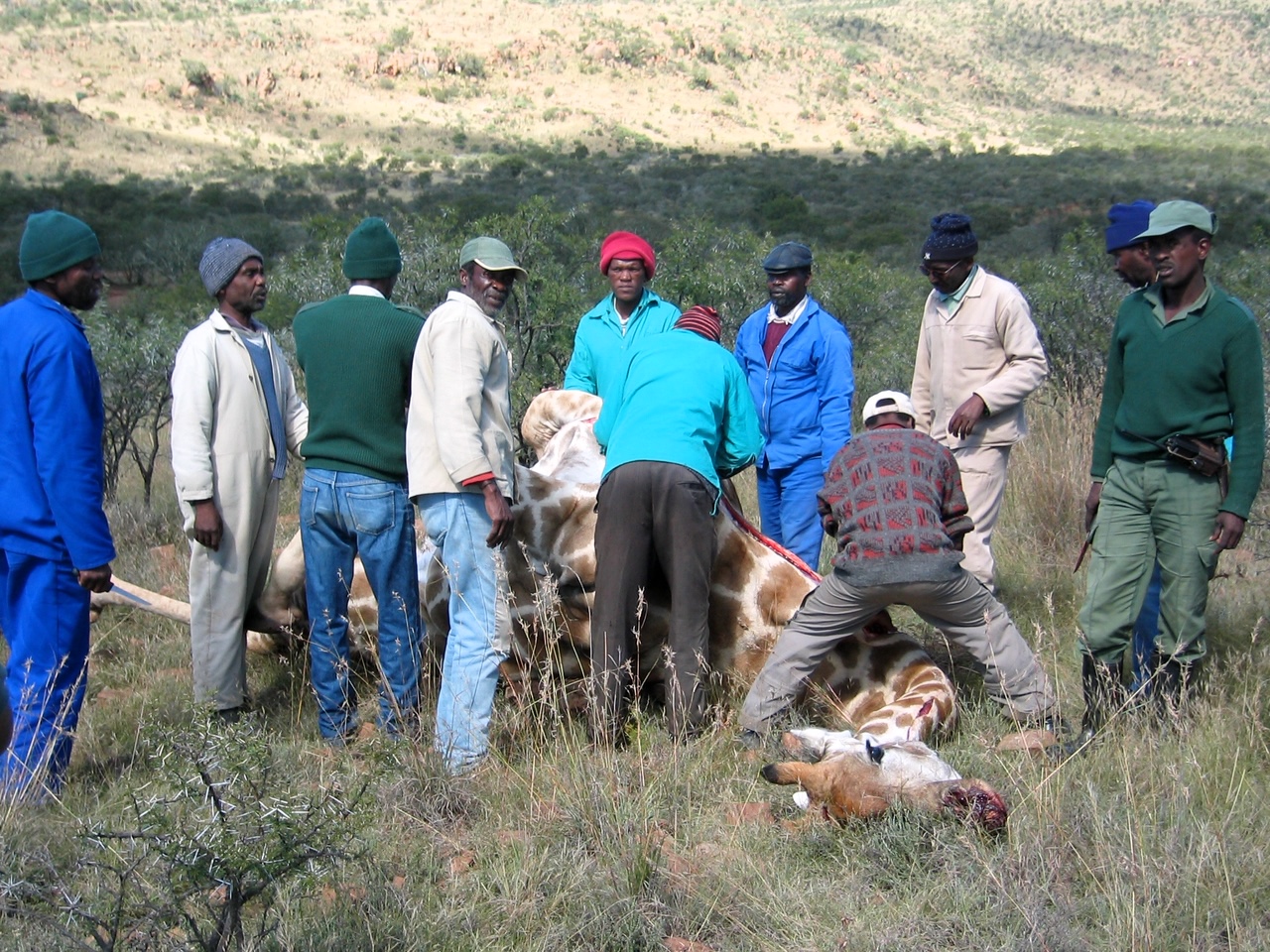 "Your imagination is your preview of life’s coming attractions." ~ Albert Einstein

Wow, just wow...
"A man and a gun and a star and a beast are still ponderable in a world of imponderables." Robert C Ruark

Great detail on the story. Love to hear more..
Bruce

I would pay money to read that-book or magazine article. . .

Thank you all for the kind words. What started two years ago as an idea to record one very significant year of my life to share with my son has turned into a nearly complete book.

About 40% of the story takes place in Africa, 30% in India, and 30% in Australia and Southeast Asia. It has been a labor of love and one of the most challenging projects I have ever undertaken.

I’ll share some more segments that involve hunting, and thanks again for the encouragement. My profession is very left-brain, and when I sit at my computer to write at night after my wife and son have gone to bed, I sometimes wonder if what I am putting down is any good.
"Your imagination is your preview of life’s coming attractions." ~ Albert Einstein

I enjoyed reading this. Very interesting. Lots of questions come up after reading this. My son is 12 and would want to know a lot more!

Tra3 said:
I enjoyed reading this. Very interesting. Lots of questions come up after reading this. My son is 12 and would want to know a lot more!
Click to expand...

What questions do you have?
"Your imagination is your preview of life’s coming attractions." ~ Albert Einstein

Please keep writing! The story you told is as good as any put into print.

Having grown up close to Yellowstone makes for a mix of questions about when to leave something alone or get involved. I enjoy talking about these concepts with my son. Better to shoot the giraffe or let predators recycle her? Should the local people eat the meat or not. If so, how would it be prepared? Is it a gift to the giraffe to help her move on?
Having done my first safari this summer I got to observe what it means to bring meat to a conservancy. The ideas of conservation and hunting are so closely tied, it was fascinating to learn more about it.
I watched the Yellowstone fires in the late 80’s and the hands-off approach. Then we watched the hands-on approach with the reintroduction of wolves. (And the subsequent change in our elk hunting!!)
I enjoyed your writing because it has these questions in the experience you had. Keep writing!

flat8 said:
Thank you all for the kind words. What started two years ago as an idea to record one very significant year of my life to share with my son has turned into a nearly complete book.

About 40% of the story takes place in Africa, 30% in India, and 30% in Australia and Southeast Asia. It has been a labor of love and one of the most challenging projects I have ever undertaken.

I’ll share some more segments that involve hunting, and thanks again for the encouragement. My profession is very left-brain, and when I sit at my computer to write at night after my wife and son have gone to bed, I sometimes wonder if what I am putting down is any good.
Click to expand...

Don’t think that way just write! I feel the same way sometimes trying to put a story together: I’m not good at this, who cares, I can’t write to save my life.......
Just keep going with it!
Philip
M

Great story- you had me hooked straight away. Would love to read more!

Awesome story! Would love to read more.
The world is full of bastards, the number increasing rapidly the further one gets from Missoula, Montana. - Norman McLean

Well written, though a bit sad. Do you know any of the "what happened after" as in did the locals get sick at all?

Eventually_Africa_Again said:
Well written, though a bit sad. Do you know any of the "what happened after" as in did the locals get sick at all?
Click to expand...

I don't know if anyone got sick. I left Africa a few days after that hunt took place and spent the next 9 months or so in India, Australia, and southeast Asia. For the balance of the year I was mostly out of contact except for the occasional stop at internet cafe's (this was 2006 after all, and iPhones hadn't been invented!). The India stories were even more mind-blowing for different reasons. Life is cheap across most of the planet.
"Your imagination is your preview of life’s coming attractions." ~ Albert Einstein

Thank you. Hopefully soon you'll get the chance! I think I'm about 2 months away from finishing what is hopefully my final edit.
"Your imagination is your preview of life’s coming attractions." ~ Albert Einstein
You must log in or register to reply here.