Hunting report for Game4Africa and Wik Coetzee, May 2018

This was my third trip to South Africa and my second trip to the Eastern Cape. We had hunted just across the road from the Coetzees 3 years ago, and I was amazed at the kudu hunting. We chose this area and time of year in hopes of another great kudu hunt. It was that and more.

You couldn’t ask for better food, accommodations, and people, but it was the hunting that really blew us away.

Day 1 started with lots of fog. We hunted the 15,000 acre property the lodge sits on. We hadn’t walked a mile when Wik spotted a big male baboon in a tree 100yds or so from us. My brother had been trying to get one for several trips. This was his 4th trip to Africa. 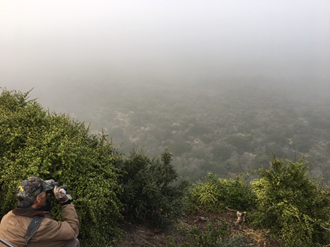 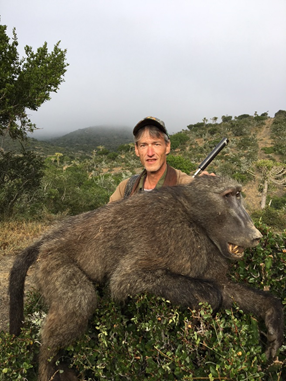 I told Wik that I wanted to break the ice with a good shot on an impala. 100yds broadside standing still while I had a steady rest off the sticks. He got me within 50yds. (May have been less than 30.) 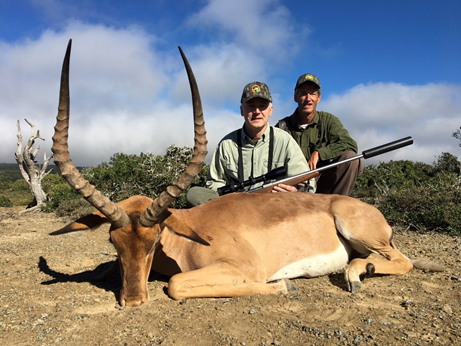 We ending up counting 80 kudu the first morning even with the fog. 80.

That afternoon my brother took a huge zebra. The dressed carcass weighed over 460lbs. 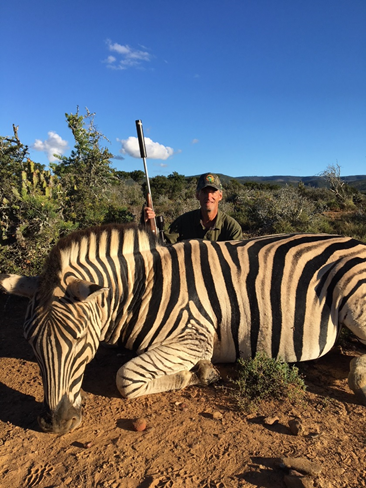 Day 2 we went to the 120,000 acre Kat River Conservancy. I don’t know how accurate the health app on my phone is, but according to it, 7 miles and 60 flights of stairs later, my brother took a monster kudu. Wik is not one for measuring trophies, but back at the lodge we convinced him to put a tape on the kudu. I don’t know, but I think he was pleased when it was 49” (which is exactly what Wik said it would be). 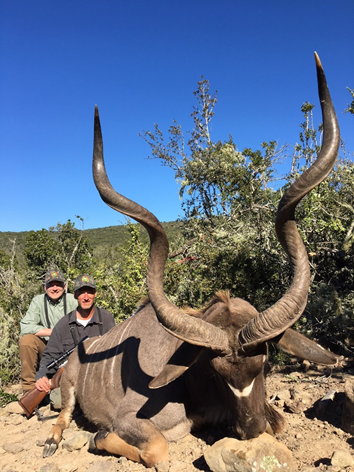 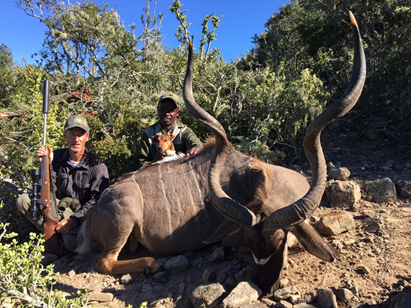 Day 3 we went to another big conservancy to hunt bushbuck. I understand it joins the Kat River, but we were a long way from where we hunted kudu. A lot of the land was very open, but the farm they own there has about 4,000 acres of canyons and valleys of “pristine” bush. Wik spotted a ewe and ram in a small opening across a canyon at 400yds. I told Wik that I had never shot anything 400yds. I got a good rest, and he told me where to aim for wind and distance. The shot was right on elevation but a couple of inches back. Because he was at a slight angle, it wasn’t a killing shot. Wik’s dogs immediately found him, and he was quickly dispatched. It was less than a mile, but another 60 flight of stairs to get to him and back from the nearest road.
We saw 40 kudu there counting those another tracker looking for bushbuck saw. 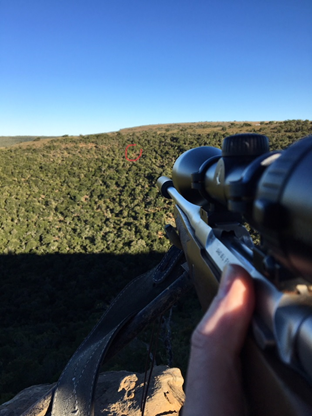 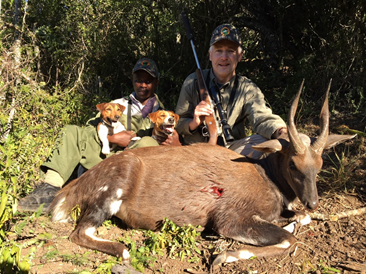 Back at the lodge property, the evening warthog hunt turned into a good impala for my brother. 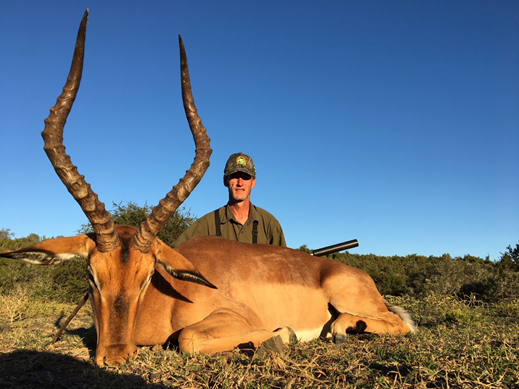 Day 4 we hunted a huge property across the road from the lodge for my kudu. We made stalks on several kudu before I finally got a shot. It was the worst shot of the trip, but Wik’s dogs again quickly found him at the bottom of a deep ravine. 7.62 miles and 123 flights for him. 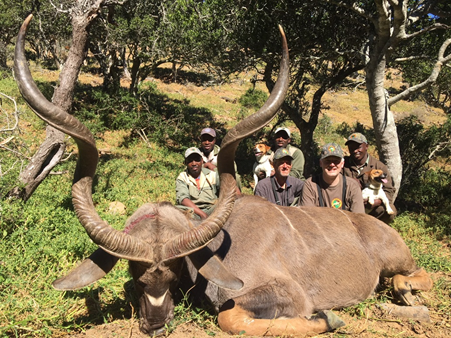 Day 5 my brother slept in, and Wik and I went to a high point to glass for warthog. Wik spotted one in a field over a mile away. By the time we got there, he was gone. We went and got my brother and set up on a closer cliff. Wik spotted a good one coming toward field. Just before he got there a bull kudu came by us at about 20yds, went down the cliff, and chased all the warthogs out of sight. We sat there a little longer when Wik spotted an old nyala bull. Nyala was not on either of our lists, but Wik “convinced” me this was an old one, and we were off for nyala. By the time we got to where he was, he was gone. But we spotted a good impala instead. I had told Wik that if he didn’t mind me taking a second impala and we saw a good one whose tips came back together, I would like to take him. Heavy horns. 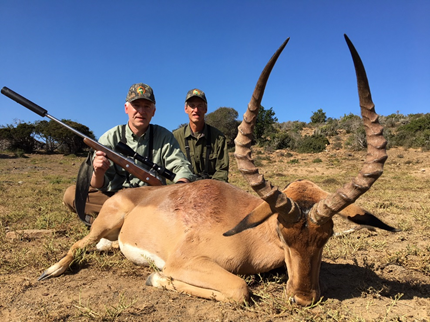 We went back looking for warthog that afternoon. Instead, we found the old nyala. I’m not an expert on aging nyala, but... most of his hair was gone, his skin was graying and cracking, and he didn’t have any teeth left. 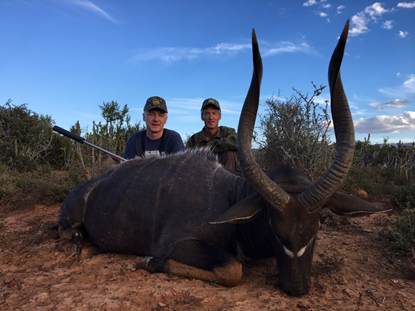 Day 6 it was supposed to start raining at midday, so we were going to try to get what we could before then. Duiker for my brother was first on the list. My brother and I had decided it would be sheer luck to get one, and it probably wasn’t going to happen. I don’t know if it was luck or Wik is just that good. I don’t think we were hunting for even an hour before we found one and made a stalk. My brother made a great shot at 200yds. 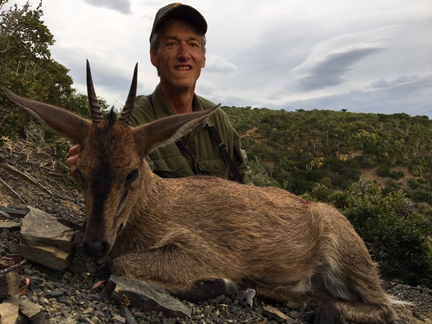 My brother found this skull walking back to truck from duiker. 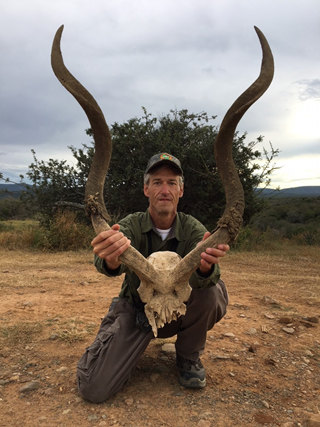 We brought the duiker back to camp, and one of Wik’s trackers had spotted a warthog. We drove off the property to come in from a different direction to get the wind. After some more walking and some patience, my brother got within 50yds of this great warthog. It started raining while we were taking pictures. 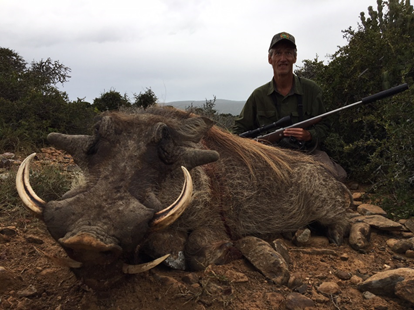 Day 7 the wind was blowing hard, and Wik drove us around to get some great kudu video.

We ended up walking close to 30 miles and 423 flights of stairs, and I hope I never forget a single step.

Looks like you guys had a great hunt! Congrats and thanks for sharing!!
JasonY

Well done and thanks for the report.

Congratulations on an outstanding hunt and report! Looks like @Game 4 Africa Safaris has another happy client.

All nice animals but that is one heck of a cape kudu. You don't see many places down there that get cape kudu that size and shape. Great job

billc said:
All nice animals but that is one heck of a cape kudu. You don't see many places down there that get cape kudu that size and shape. Great job
Click to expand...

Great photos and report. Everytime I think I have made my choices about my next Africa hunt, I see a report like this and I think "I need to go there too.....FWB

All great looking trophies but that heavy impala is awe inspiring! Congrats on a great trip and thanks for posting.

Great trip, thanks for sharing!

What a great story and you certainly got some nice trophies. Kudu hunting in the Eastern Cape is the best.
H

Wow - I recognize you from the Flights back from Port Elizabeth and Johannesburg to Atlanta. We all were there hunting at the same time. We were at HuntSA and was very happy with our hunt also. Loved our First trip to South Africa to hunt.

Congrats for a great hunt, and thanks for your report !

Congratulations. What Rifle did you use? Ammunition?

awesome animals!!!! The miles of walking sound familiar, but no better way to do it.
courage is not having the strength to go on; it is going on when you don't have the strength!
-Teddy Roosevelt

We used their rifles. Sako 7mms with hand loads.

Congrat! Some magnificent trophies taken on that hunt!
R

Great report, brought back the great memories I had there just before you arrived. Quantity and quality of game was very high.
You must log in or register to reply here.