So many folks dream of an African safari, but never make it happen. Too often, it seems they are unable to commit due to fear and uncertainty over downrange business ethics, in-country safety, the unknown, and finances. Enter my friend, Joel, who faced all those same fears and went on his first African hunt. Oh yes, and Joel is a one-legged, one-handed, totally blind, and badly burned young man.

JOEL'S STORY
I met Joel in 2008 when he was in the Haley VA Hospital in Tampa, FL. He'd been severely wounded in Iraq. I was the HQ CMDT at HQUSSOCOM and my 1SG asked me to join him and visit some wounded guys in the hospital. Joel was a mess; missing a large chunk of his skull, badly burned, leg amputated below the knee, hands badly gnarled, and completely blind. Even in this condition, at his mother's urging, he thanked the 1SG for visiting and saluted me with his damaged hand - this level of discipline and lack of self-pity, along with an amazing sense of humor, are Joel's trademarks. We became friends, talking every few weeks, and visiting him a couple times after leaving Florida.
I'd been "kicking tires" and thinking about my second safari when Joel, who now had several successful stateside hunts under his belt, called and asked if I'd allow him to join me at his expense on my next African hunt. Joel hunts with the use of an iScope adaptor that allows his guide/PH to help get the crosshairs on target before Joel pulls the trigger Unstoppable Warrior . I told him I'd run it by my bride who said "it's Joel, you have to say yes." A year-and-a-half later we were on a plane.

SNAFU
We were supposed to meet up in Atlanta several hours prior to boarding our non-stop Delta flight, but weather in Atlanta kept me grounded in Greenville, SC and I arrived just after the plane left. Fortunately, Travel With Guns was monitoring our flights and we worked with them and Delta to leave two days later. We lost our Delta Comfort seats, but ended up with bulkhead seats, pretty good all things considered. Once done, I notified our booking agent and shortly thereafter received a text from Cruiser Safaris saying they'd simpy shift everything two days to the right so we wouldn't lose any hunting time. Likewise, Travel With Guns worked with Afton Safari Lodge to shift our reservations as well.

We arrived in Jo'berg and were met at our gate by two of Mr X's (courtesy of (Afton Safari Lodge) assistants who whisked us through customs to the SAPS office where we were met by Mr X. Minutes later we were in a van for a short ride to Afton for a great steak dinner and a night's rest. They even had a stool in the shower so Joel could take a shower. Since we'd arrived two days late and would be leaving the country two days late, our gun permits would expire during our stay. Mr X worked the extensions and e-mailed them to our outfitter for us! Afton also e-mailed me to say we'd left an adaptor in our room and offered to meet us at the airport to give it to us when we left. Pretty amazing service.

THE HUNT
After about a 4 hour drive with Joel's PH and the videographer, with a stop for fresh produce, we arrived at Cruiser Safaris. Our dinner, as was every meal while there, was delicious and served with a smile by a wonderful and attentive staff. Our accomodations were embarrassingly decadent; remote control heaters, hot water bottle in bed each evening, hot shower with good water pressure, etc...and very clean. 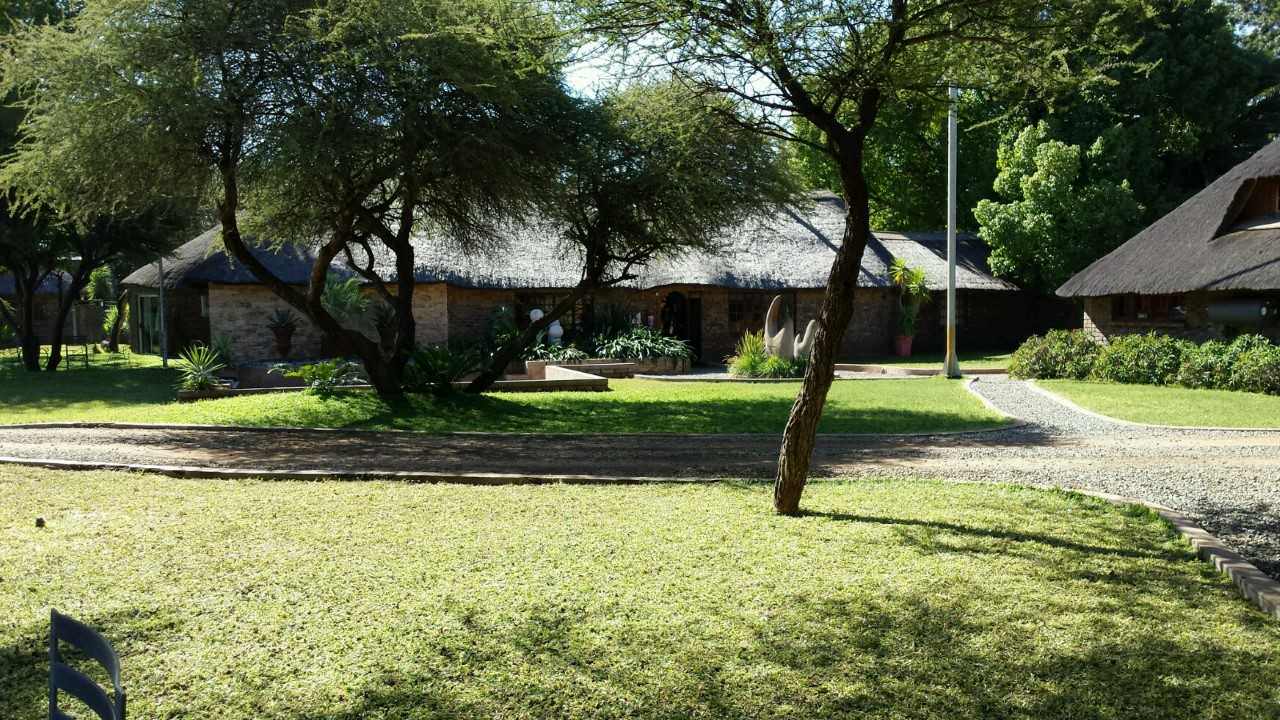 Joel and the chef, Del Marie (aka Tiny), got along fabulously. 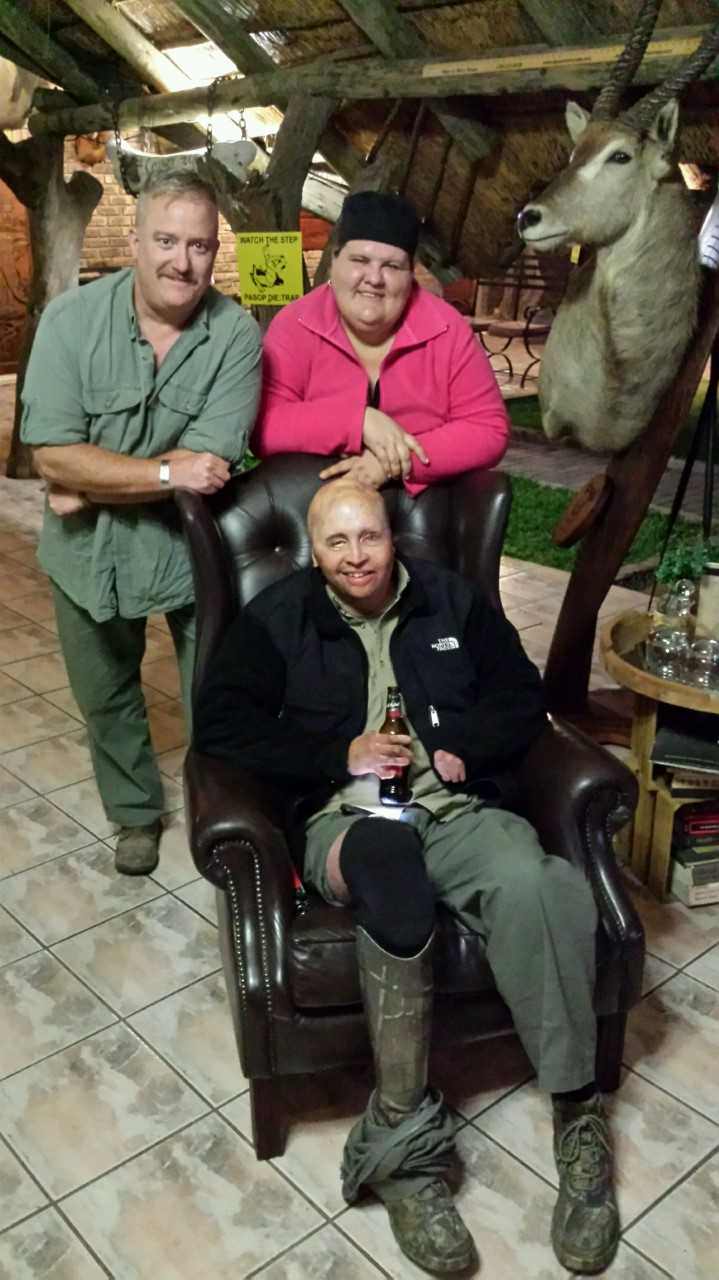 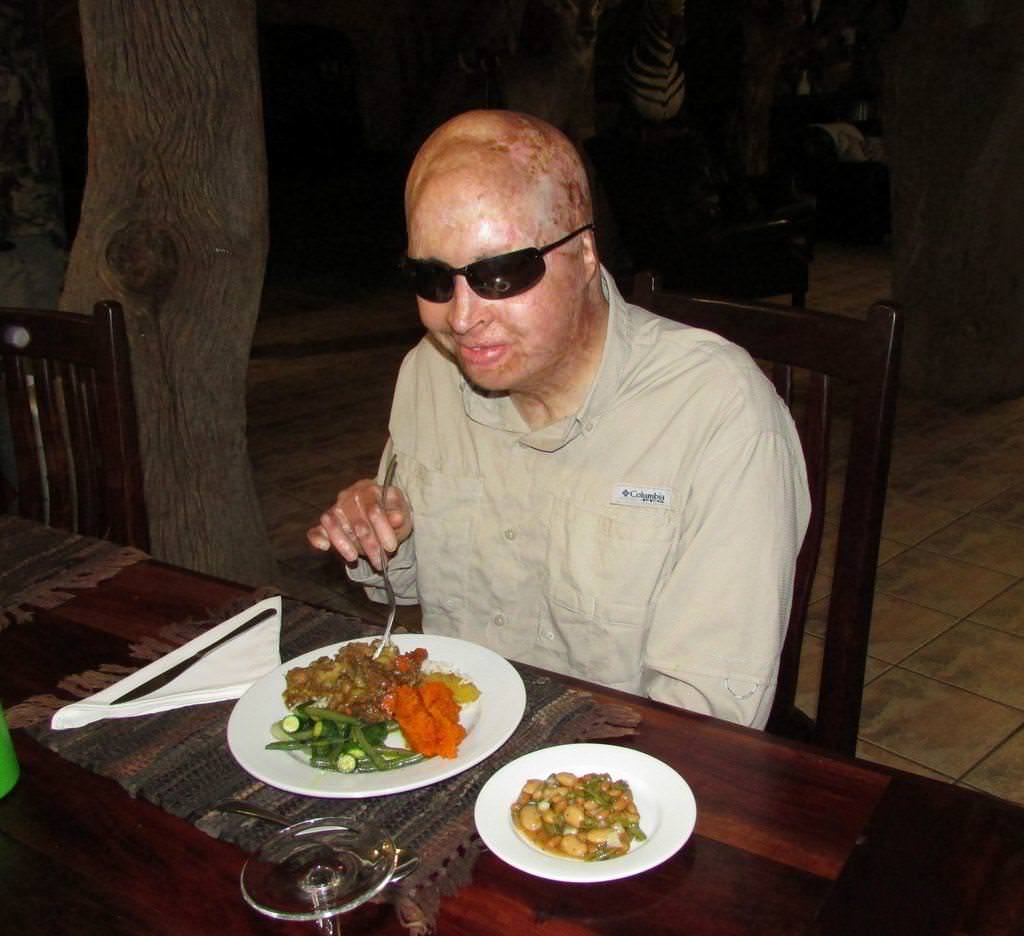 Pieter, our outfitter, was with us multiple times daily and genuinely interested in how we were enjoying our hunt. A practical joker, he and his crew are a lot of fun. 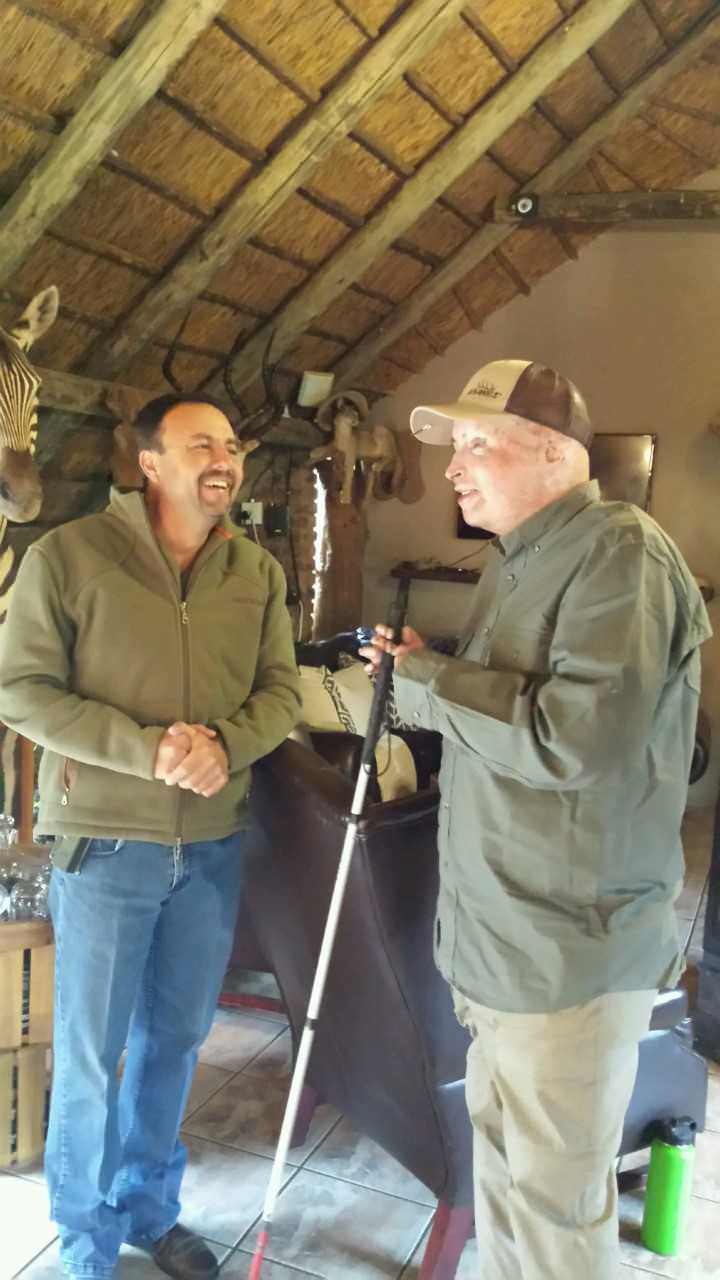 First order of business was sighting in of the rifles and evaluation of client shooting abilities. I was uncharacteristically accurate. Then it was Joel's turn. He and his PH got the iScope set up and mated to his scope and iPhone. 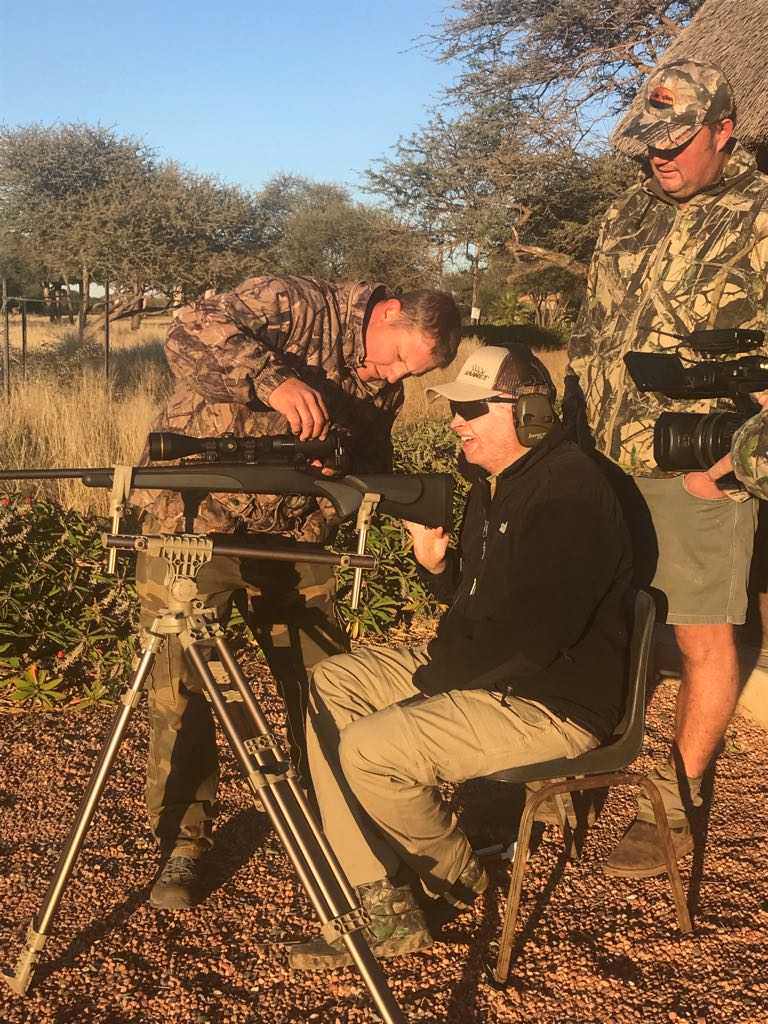 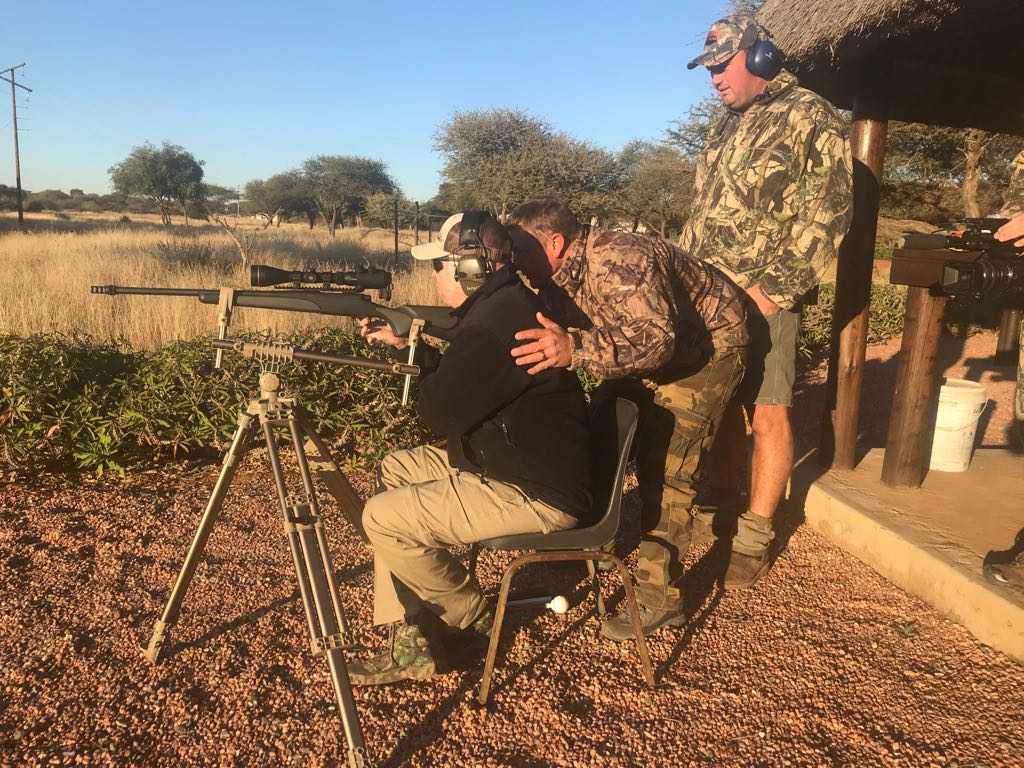 Joel's first shot at 100 yds wasn't on the paper and the look on his PH's face said "what have I gotten myself into." Another shot, however, and they were in business. I'll save the blow-by-blow and tell you Joel missed one Impala and his Wildebeest required a follow-up shot. Every other animal was a one-shot kill and fell within sight of the blind. His 308 Winchester and Barnes TSX bullets were up to the task. 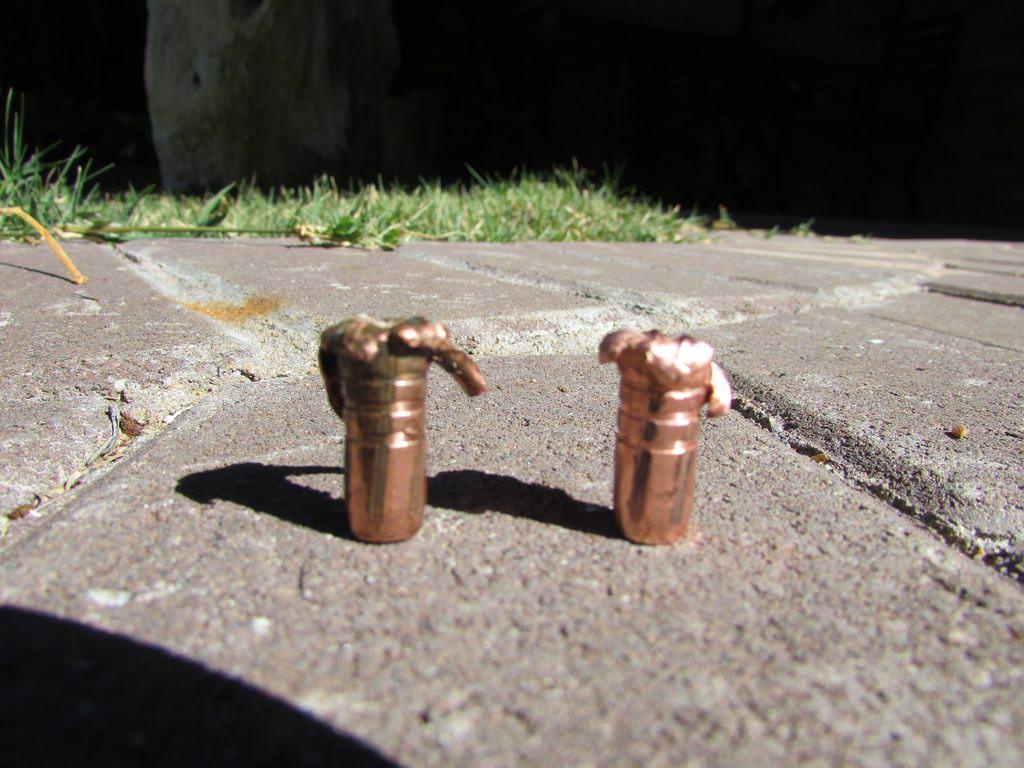 PH Craig and tracker with the makings of a blind. 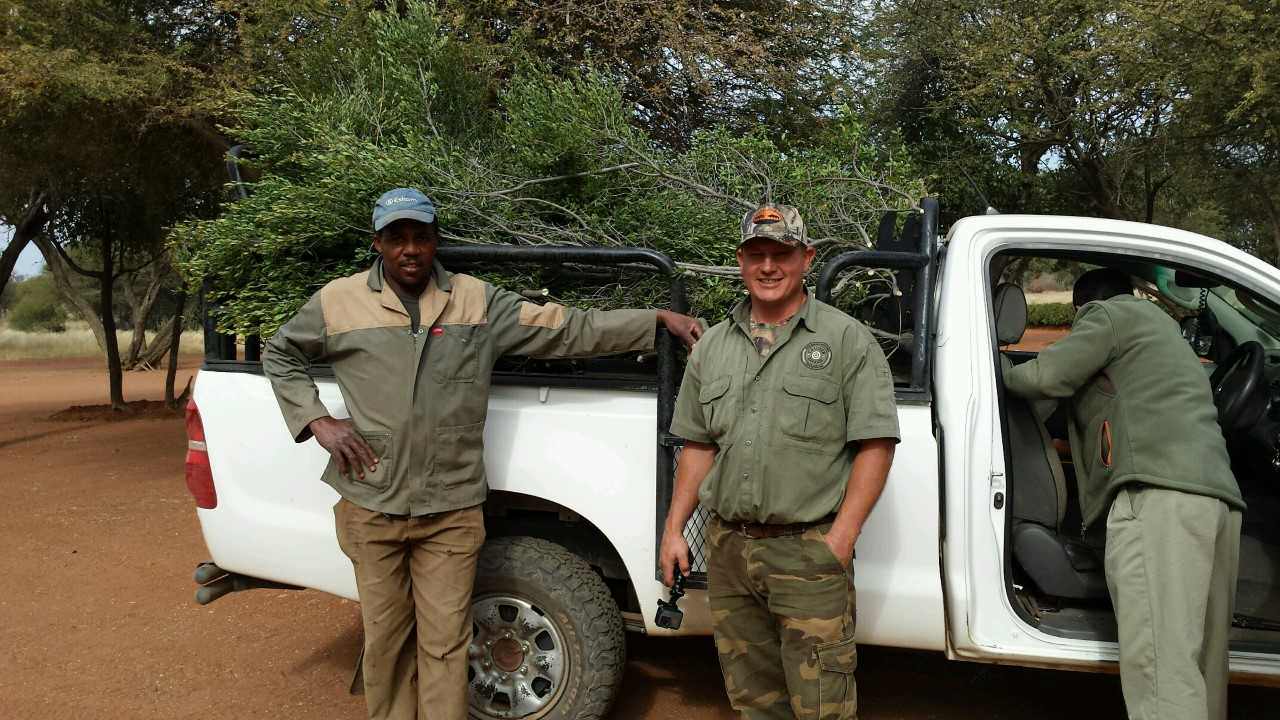 He took Blue Wildebeest, Impala, two Warthogs, Waterbuck, Blesbok, Kudu, and Zebra. The only animal he targeted but couldn't bring to bag was a Steenbok, but it wasn't for lack of trying. 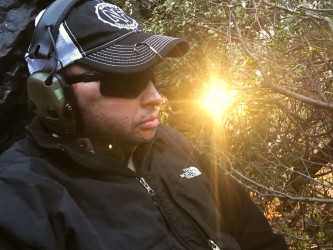 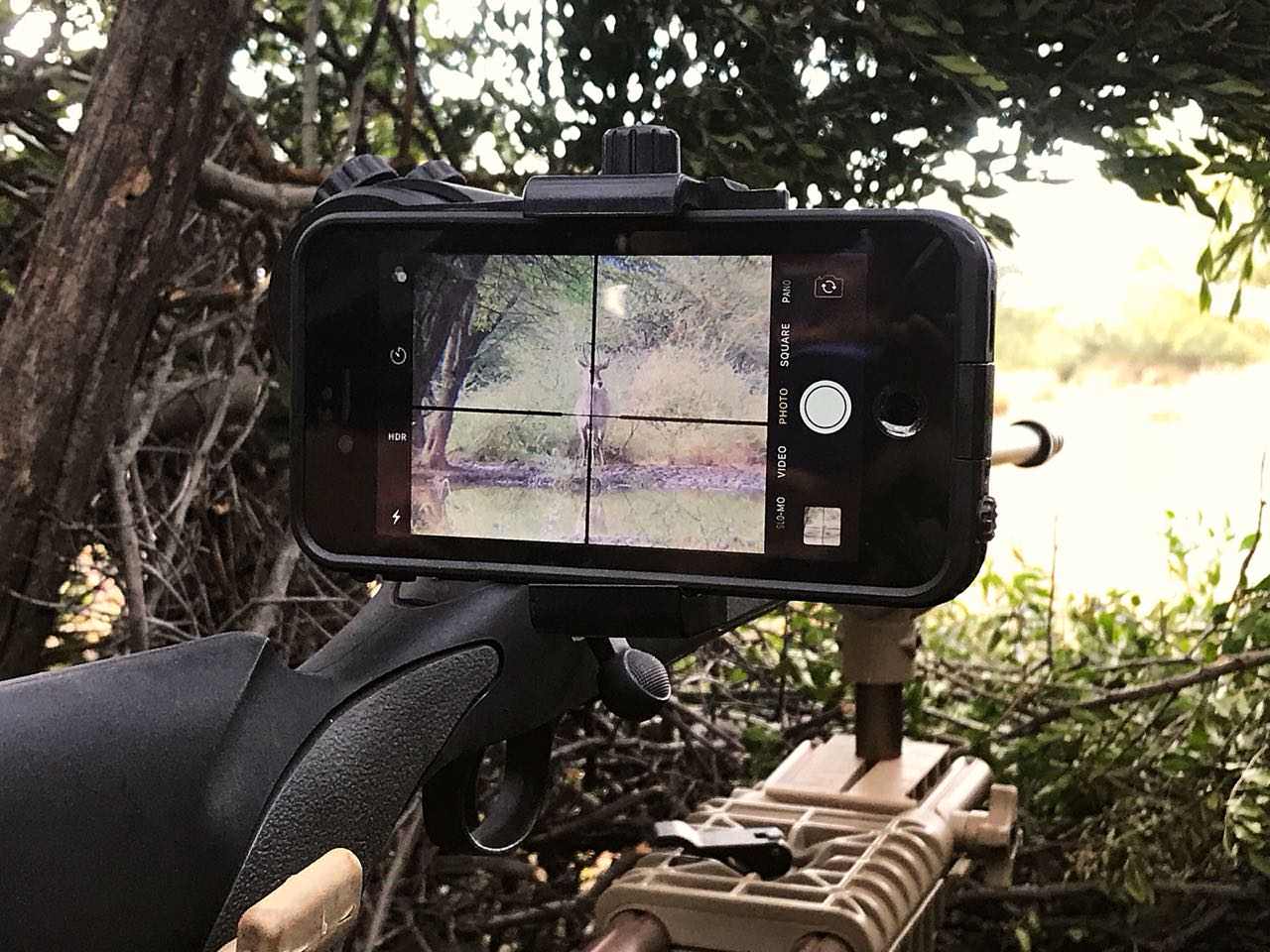 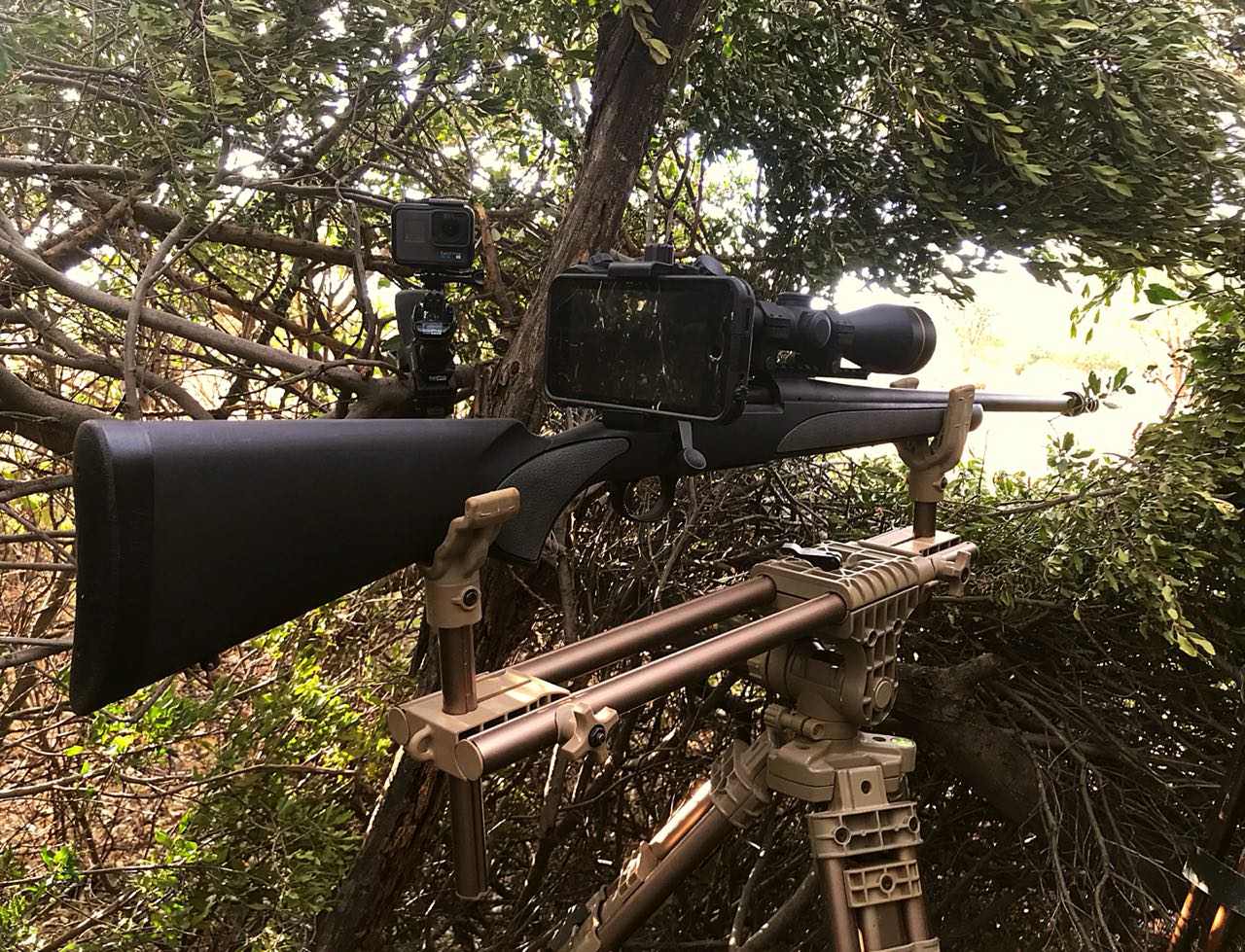 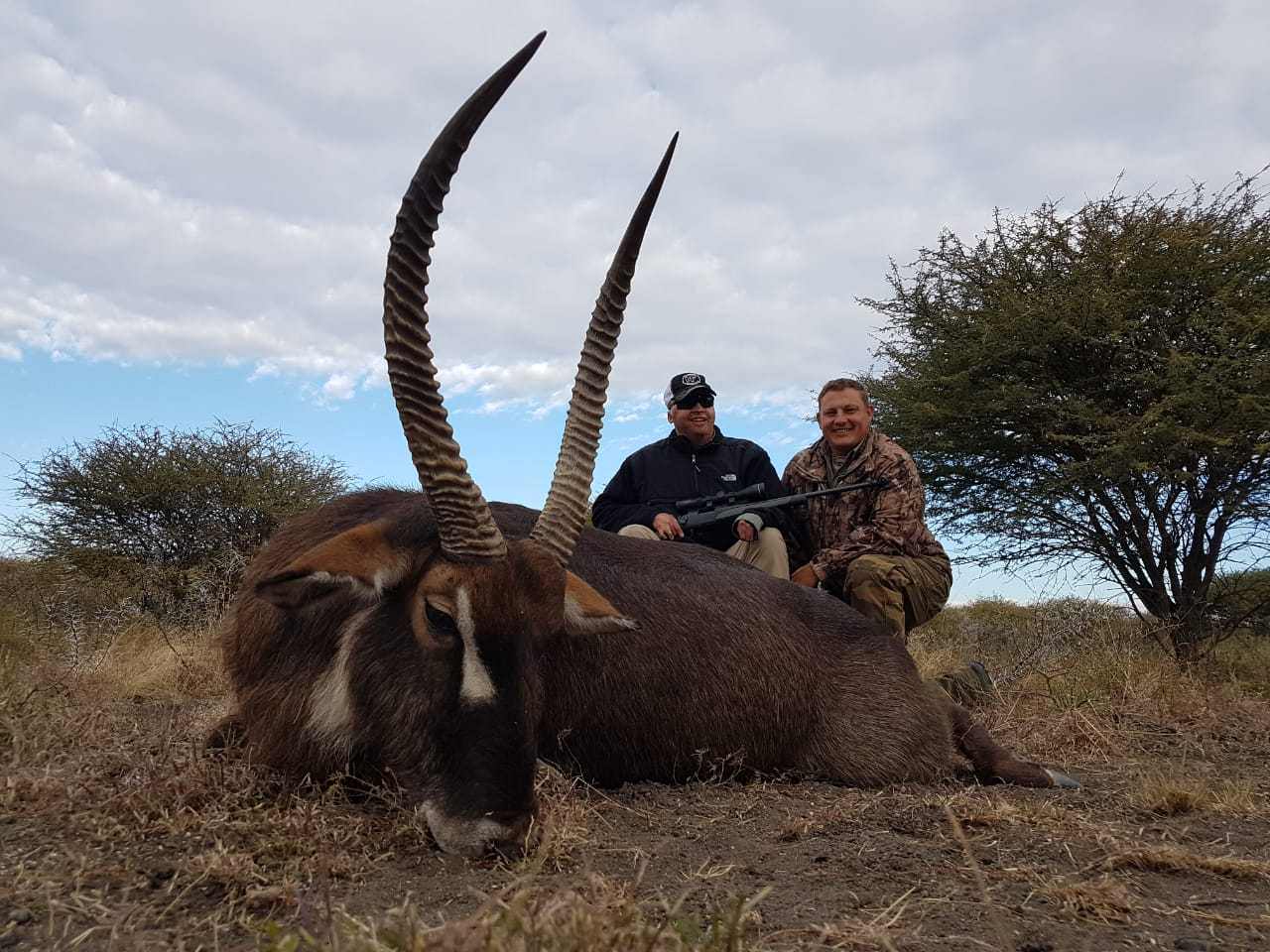 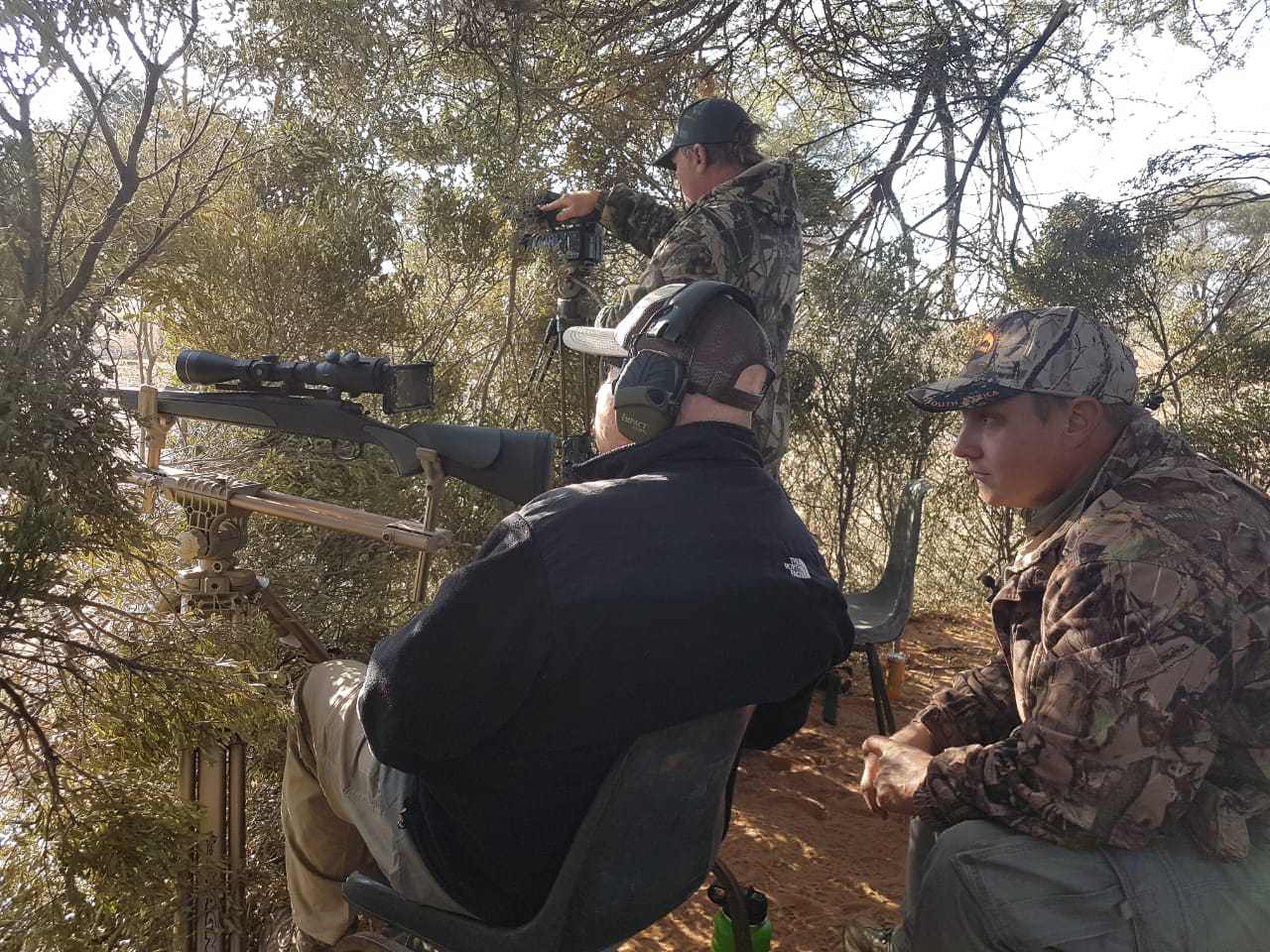 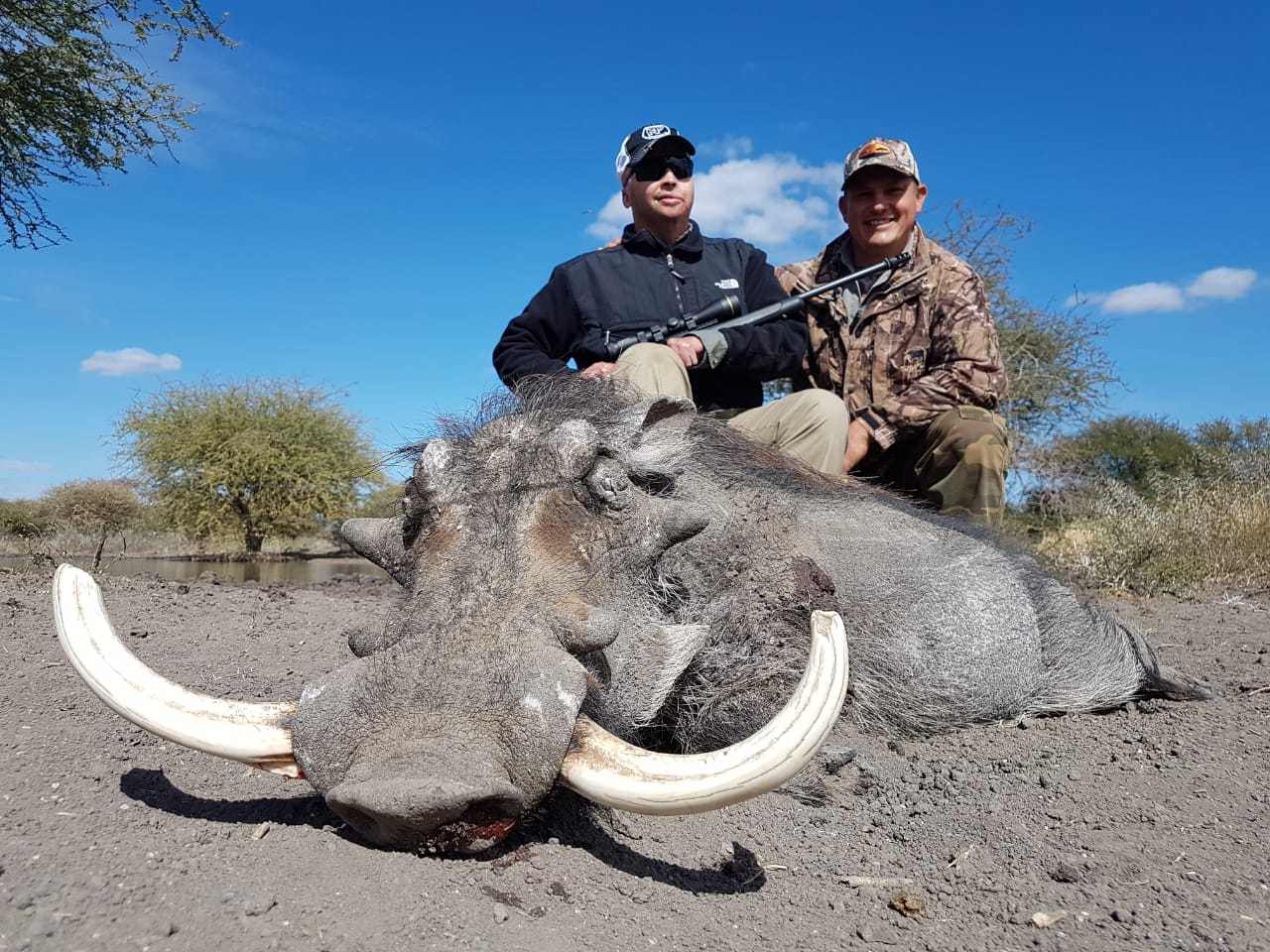 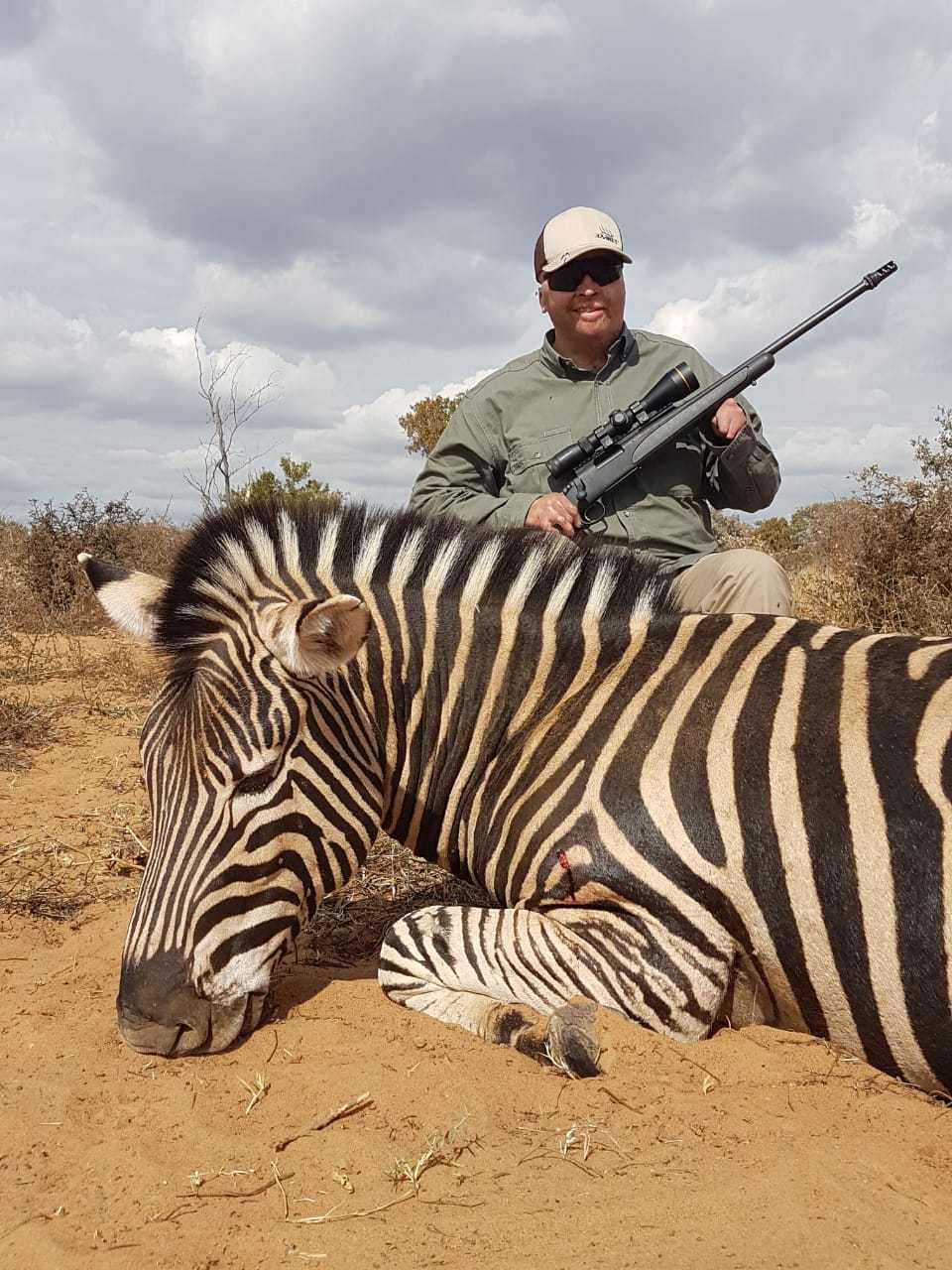 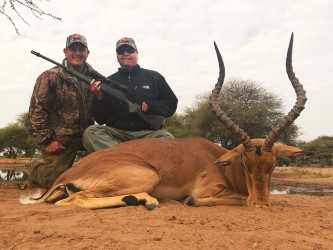 I hunted as well, taking Nyala, Steenbok, three Warthogs, Blesbok, Red Hartebeest, Waterbuck cow, Gemsbok, and Impala. My PH, Frank the Tank, delighted in tracking, working the wind, and getting us in close. As a result, I only took two shots over 100 yds and many times were well within 30-40 yds from unaware animals.

The only bullet recovered was from a partial front shot on my gemsbok. 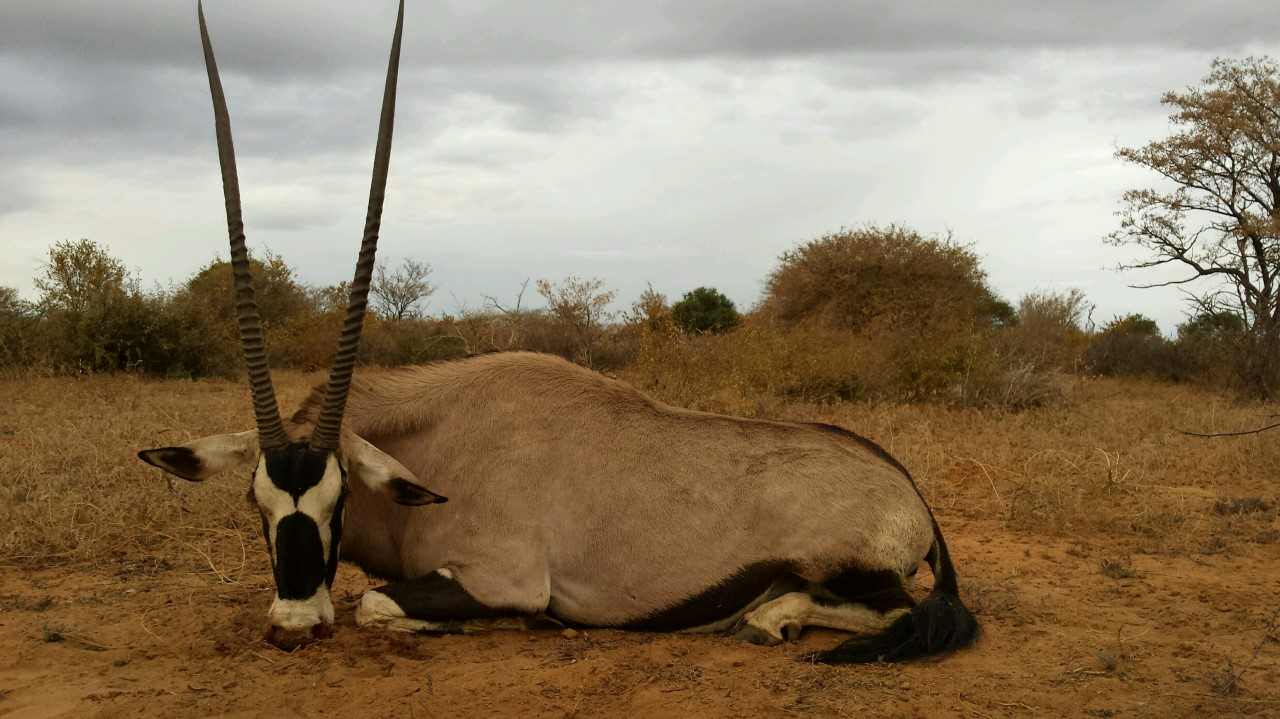 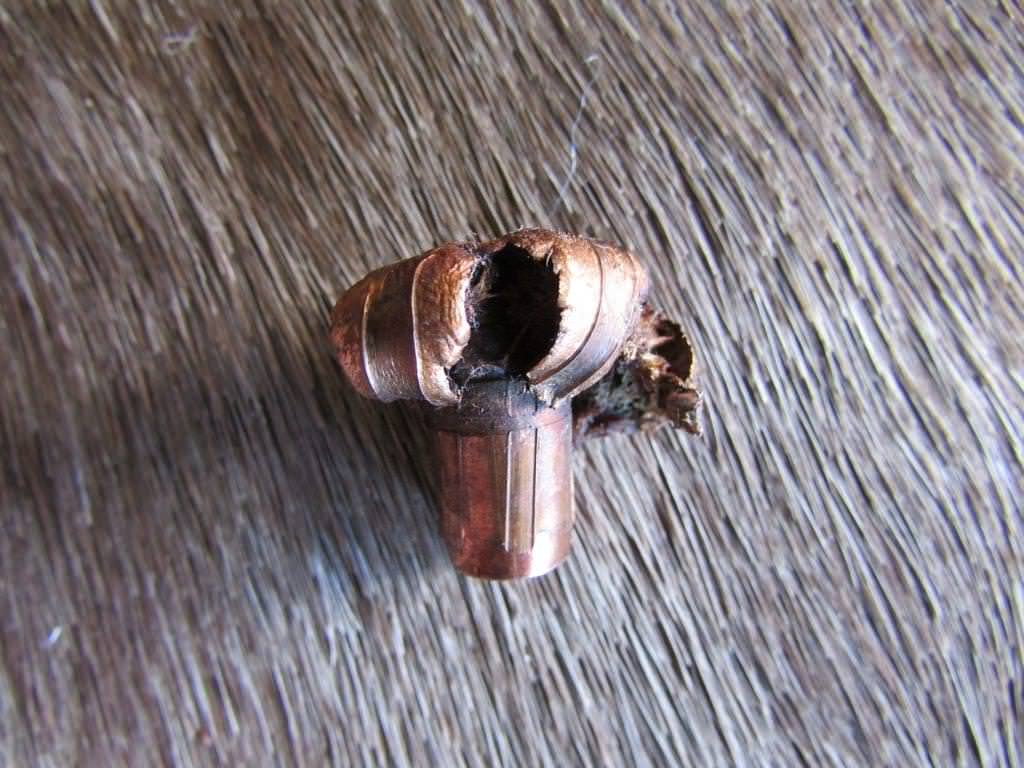 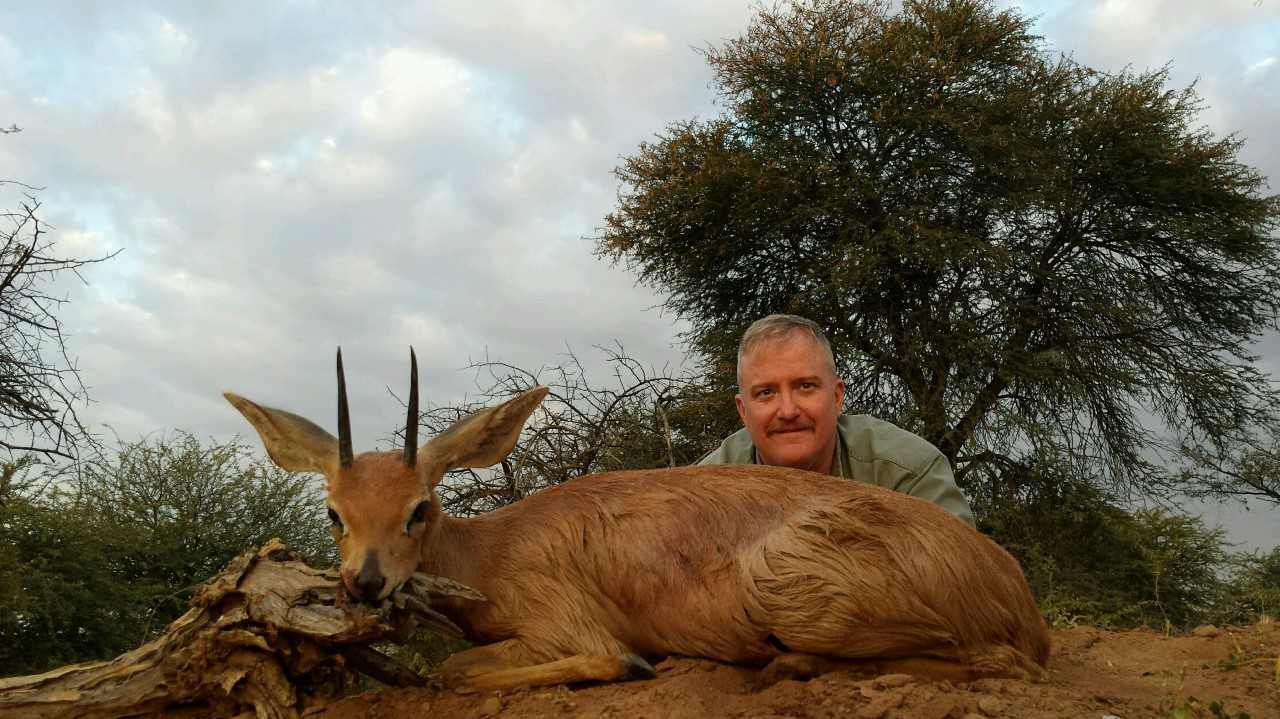 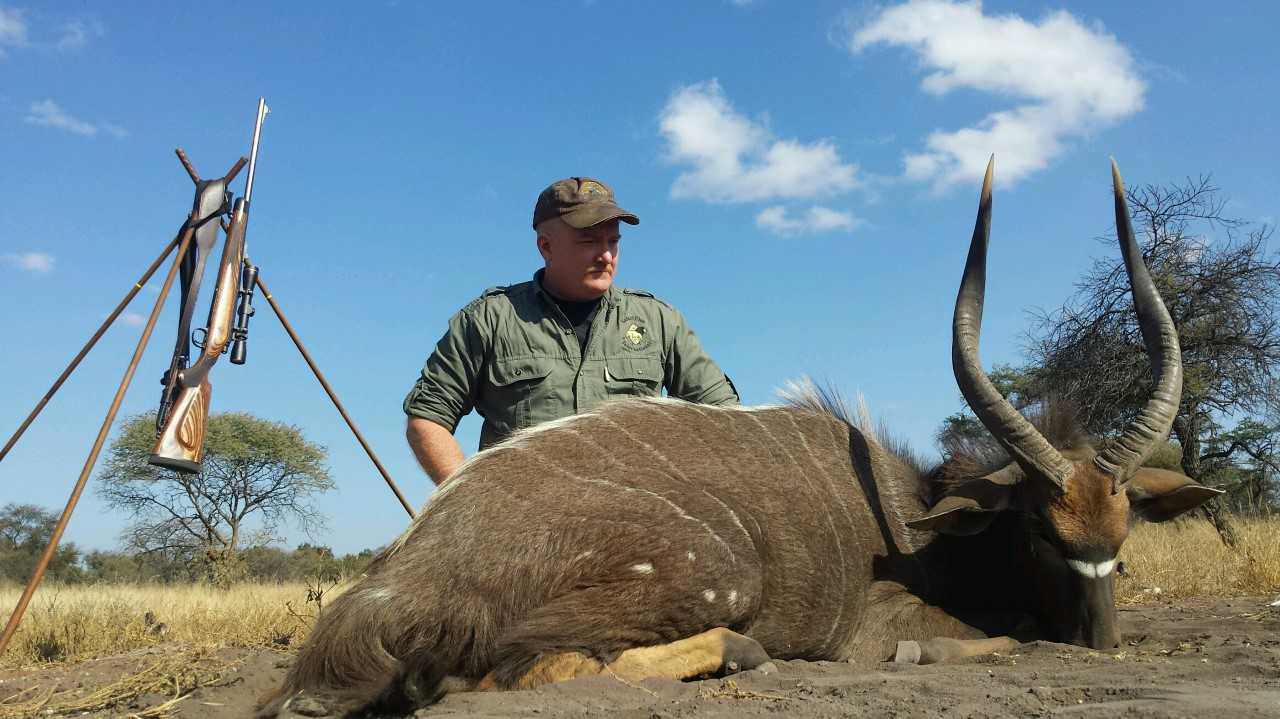 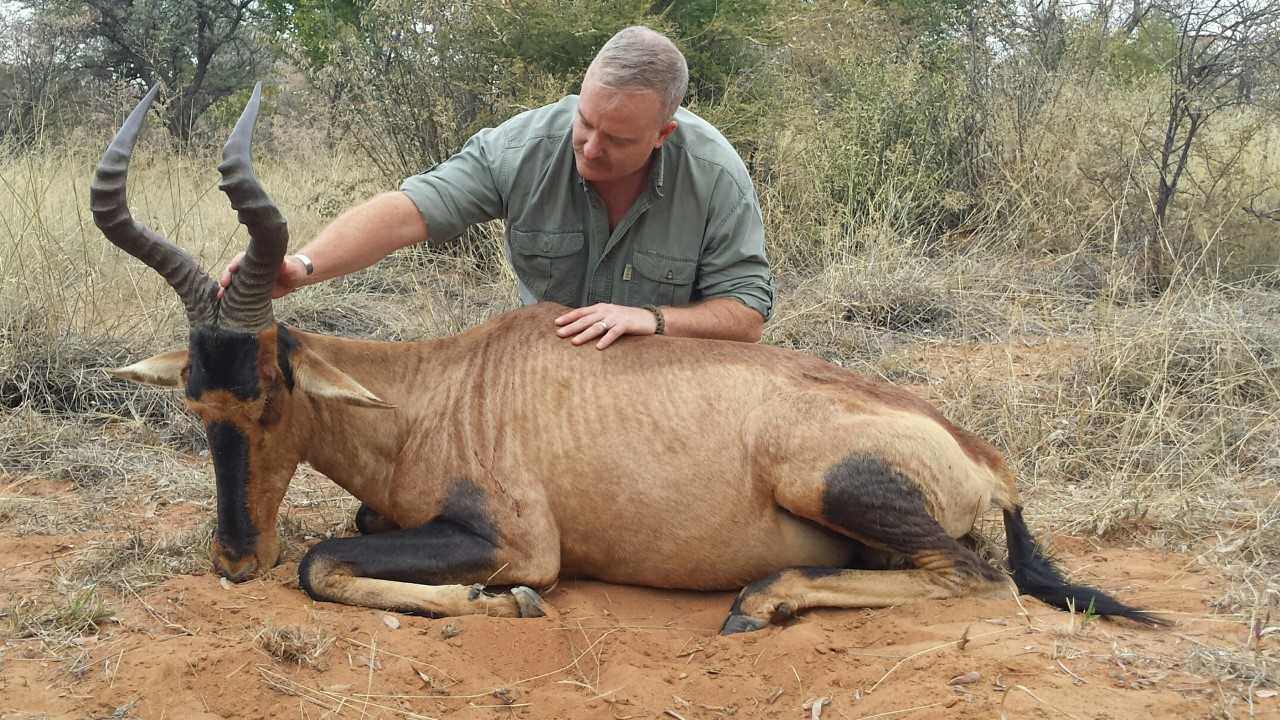 I owe a few "shout outs" to those who really went above and beyond:
- Cruiser Bob who prepared us for our hunt and spent lots of phone time with Joel.
- Wishes for Warriors who, after Cruiser Bob spoke with them, picked up the tab remaining on Joel's Kudo Combo hunt. Joel later added another four animals.
- Travel With Guns who did a great job minimizing effects of our weather induced delay.
- Afton Safari Lodge for taking care of expired gun permits and ensuring our room was handicapped accessible.
- Highveld Taxidermy who offered to mount Joel's choice of one of his trophies for free!
- Pieter, owner of Cruiser Safaris, who offered Joel a 1/2 price Waterbuck and whose daily involvement kept the hunt on an even keel. No drama leader there.
- Great PH's, Craig and Frank, who were always ready to "make a plan" to and adjust fire as necessary. Great job guys!
- Richard, the videographer, whose great sense of humor was a welcome addition. I've seen clips from what will be a great show of Joel's hunt.

Good stuff!! Congrats to you both and thanks for sharing!

Amazing! Well Done to all of you. Proud of you and Joel. Very encouraging read.

Fantastic story! I salute all involved who help to make this happen.

Congratulations to both of you. That's one hell of a warthog Joel.

Just a great story, congrats to you both! And thank you both for your service!
J

What a wonderful story! Kudus to both of you.
H

Great story. I have hunted with the Joker and I bet he and his camp did a great job and took great care of you. Tiny’s food and desserts are the best!

Great Story. My dad, brother and I hunted with Cruisers in 2016, great place with even better people.

Excellent, congrats to you and Joel. Well done.

I salute you both! thank you for sharing and congratz on a successful safari!!!!
M

Congrats to both, especially to Joel!

Fantastic. Congratulations
Tommorow is promised to no one. Go live your dreams.

Joel, thank you for your service and congrats on some great trophies.
Those who would give up essential Liberty, to purchase a little temporary Safety, deserve neither Liberty nor Safety. Ben Franklin

I can't seem to edit my post, but wanted to add to the "shout outs" that... - Maria Felix, CEO of Hunter International Broker Sevices, who offered to provide their brokerage fee, messenger charge, and airline storage free to Joel.

She was actually the first to step in to recognize Joel's sacrifice.

God has a special place for all who do so much for these wonderful young men and women.
"We sleep soundly in our beds because rough men stand ready in the night to visit violence on those who would do us harm" American Novelist - W. Churchill

Badger Matt said:
I can't seem to edit my post, but wanted to add to the "shout outs" that... - Maria Felix, CEO of Hunter International Broker Sevices, who offered to provide their brokerage fee, messenger charge, and airline storage free to Joel.

She was actually the first to step in to recognize Joel's sacrifice.
Click to expand...

she is one fine lady,have done business with her company more than once.

great safari guys.
You must log in or register to reply here.