We just got back from our first African hunt. I traveled with my best friend and two brothers. It was an incredible experience that far exceeded any of our expectations. We went into the trip with some reservations. My brother had concerns about his safety after he read about a few isolated incidents. I want to thank the AH members who offered their comments and experiences about my "Safety in Limpopo SA for hunters" thread prior to our departure. I believe it helped my brother from making the big mistake of backing out.
We arrived in JBerg from Atlanta via Tampa after a long but tolerable 16 hour flight. We cleared customs and picked up our firearms with the help of Adele at Hunters Permits Africa. She made the process quick and easy, well worth the nominal fee. We were meet by Daniel, our PH and owner of Kolobe Safaris and Jan also a PH who drove us the 2 1/2 North to the Lodge. As we entered the property we spotted a porcupine and Daniel instructed me to commence to shooting. I didn't hesitate and within minutes of arriving I had my first animal.
The next morning we sighted in the rifles and began hunting. We ended up splitting up in two groups. My buddy and I drove with Daniel and were able to get within 260 yards of a small herd of Blesbok. I squeezed one off and dropped a nice one in its tracks. As we were heading back for lunch we spotted a group of 3 Gemsbok. An old male and two younger ones. We stalked them and finally were able to set up for a shot. Daniel had noticed the smaller male had a bad leg and asked me to take him out instead of the trophy. I was satisfied knowing I could of taken the trophy and the consultation of a free gemsbok. When we returned for lunch we learned my brother had wounded a zebra and they had been tracking him for a couple of hours. We joined in on the recovery and set up for a possible intercept and sure enough he stepped out a 150 yards from my position and I was lucky enough to deliver two final shots. That evening we were thrilled with our first day of hunting. The accommodations and food were also outstanding. The main lodge consists of a newly constructed two story building filled with game mounts with views of the bush and surrounded by several well appointed chalets complete with a fire ring and even a pool. We were eagerly anticipating the next 5 days of hunting. 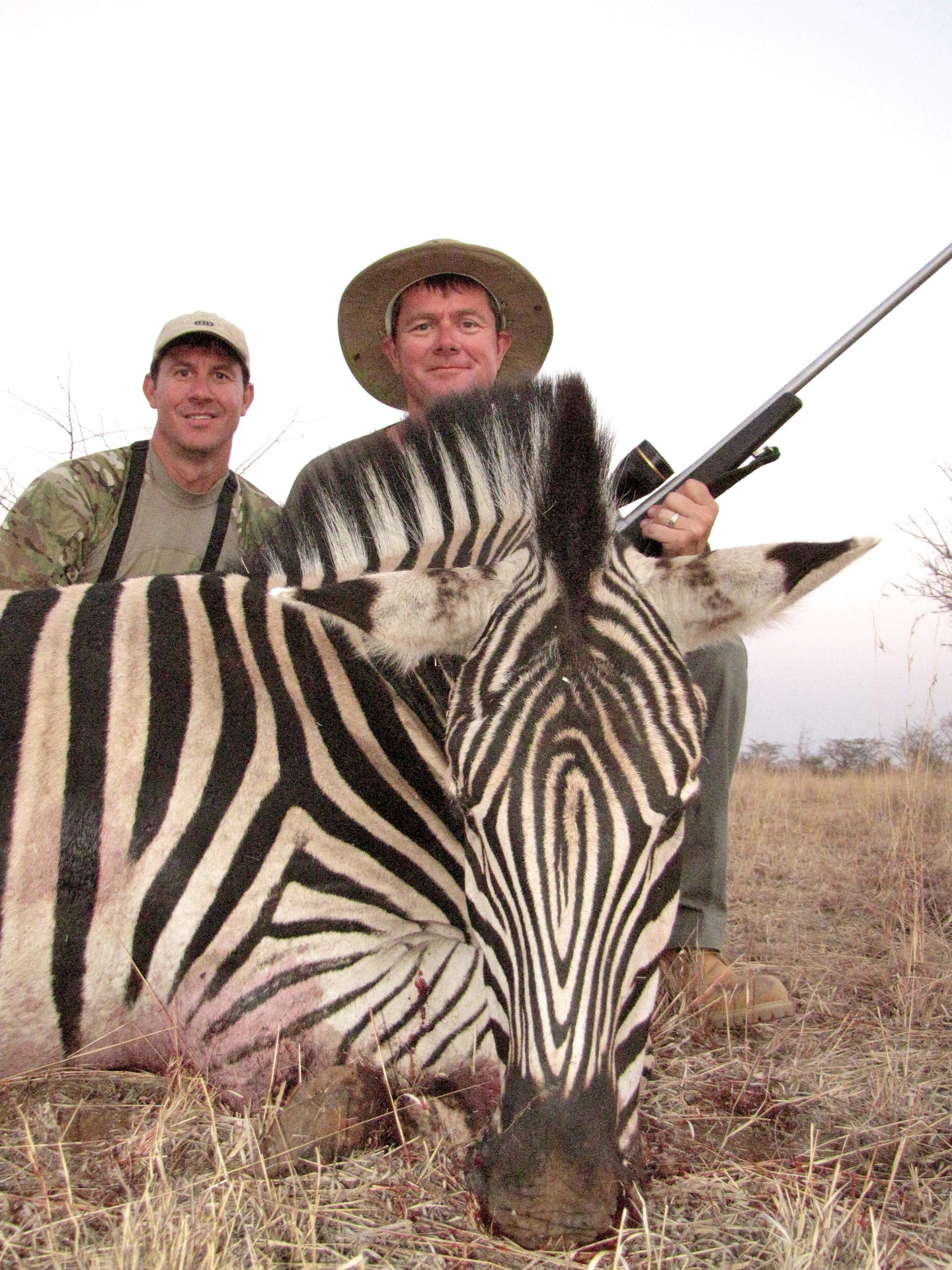 Congrats on a great first Safari.
Those are nice trophies.
Yep, now you're screwed!

Some really nice animals there...Waterbuck looks fantastic...nice heavy horn by the look of it.
Now you have the Africa virus life will not be quite the same.
Cheers

congratulations alround
they are a great bag of trophies
well done fellas
THE HUNTER; The person that pays over 90% of the cost for the presavation and maintance of wildlife and gets zero credit for it ................

Congrats on a fine hunt glad all of you had such a great time and got some fine trophies. Thanks for sharing. Love that Waterbuck.
Enjoy Life Now! It has an Expiration Date.

Looks to be a great safari by all...

Story was good and pictures to back you up...

Outstanding trophies, congratulations! I just got back from my first safari as well, and I'm already planning my second trip.

Yeah it's kinda funny, but I had my second trip planned before I even finished my first! It was that good!

It is really encouraging to see several of us first timers have such great trips.

Thanks for taking the time to share, looks like you had a great time with your brothers.

jeffpg said:
Yeah it's kinda funny, but I had my second trip planned before I even finished my first!
Click to expand...

Dejavu. I did the same thing. Congrats to you and your bros.
Why we hunt, even lions? Real hunters need thriving wildlife, so we help make it happen. - Olivia Nalos Opre

Congrates, nice animals and pics!!! Sounds like you have been bitten by the African bug...:crazylol:

Congrats for a great hunt and nice trophies, specially that waterbuck!

Good lessen for all of us. "Listen to the PH." Nice report and pics. Nothing but fun.

Great story Great pics and to hunt with your brothers. It looks and sounds like you had a fantastic hunt. Man I need to get back to Africa. I wonder how much I could get for a kidney.

Thanks for the hunt report and pictures!

Thanks for the wonderful hunt report and pictures!
Jerome Philippe, Founder of AfricaHunting.com

Congratulations on your success.

I am considering hunting with Daniel and Dorea. How were their attitudes? (very serious, laid back and jovial?) How well do they work with limited shooting ability (I'm good to 150 yds right now)? I am going to be putting several years worth of salary to this hunt and I want to be certain I won't be miserable in their company.
How are their rates?
My list is gemsbok/kudu
the other one
warthog
zebra
predators (caracal, hyena, cerval, babboon, etc)
impala
Did you find the numbers of animals per day acceptable or were you driving for hours searching?
Were the staff fun people or was it very business like and professional?
Would you recommend them? Why or why not?
Thank you very much for your input,
Tiss
You must log in or register to reply here.