Day 1 of my safari was blessed with this beautiful zebra and blesbok, I mentioned to my PH that I would like a zebra with strong white stripes on its face, as we sat on an overlook our master tracker Patrick came over and told us he had spotted 2 zebra so we took a look at them and decided one of them had the colorations I like on the face, the wind was blowing right to them so we Knew they were going to bust out of there, Patrick decided to hike around and above them to see if he could get them to move our way, we were perched on a cliff looking into the valley just above a plateau we thought they would travel on if they came back our way. As luck would have it the plan worked and I set up on the sticks, Willem ranged them at 260 yards and told me the one I wanted was the one in the back, I settled the 30.06 and touched the trigger. As the shot rang out Willem told me reload Incase we need another shot, the zebra ran into the thick brush and only one came out and ran over the hill calling out to the other. We sat there watching the brush to see if we could see any movement but the only movement we saw was from the wind, we decided to head off the cliff and see if we could turn it up, the shot sounded good, Willem said to me it looked like I hit it but we don’t know if it’s down and that zebra are very tough animals. We made it down to the brush we last saw it go into and found some blood, as we worked the corner of the brush Willem looks at me and says there it is right there, as he is taller than I am, I asked “is it dead”, the smile on his face and the hand shake and the congratulatory hug told me I had my zebra.. very excited I went to it and thanked him for its life and the beauty of the animal, I rubbed my hand from face to tail and told him he was beautiful, I am very pleased with my zebra and look forward to the pedestal mount to be finished so I can honor and cherish this beautiful creation for the rest of my lifetime 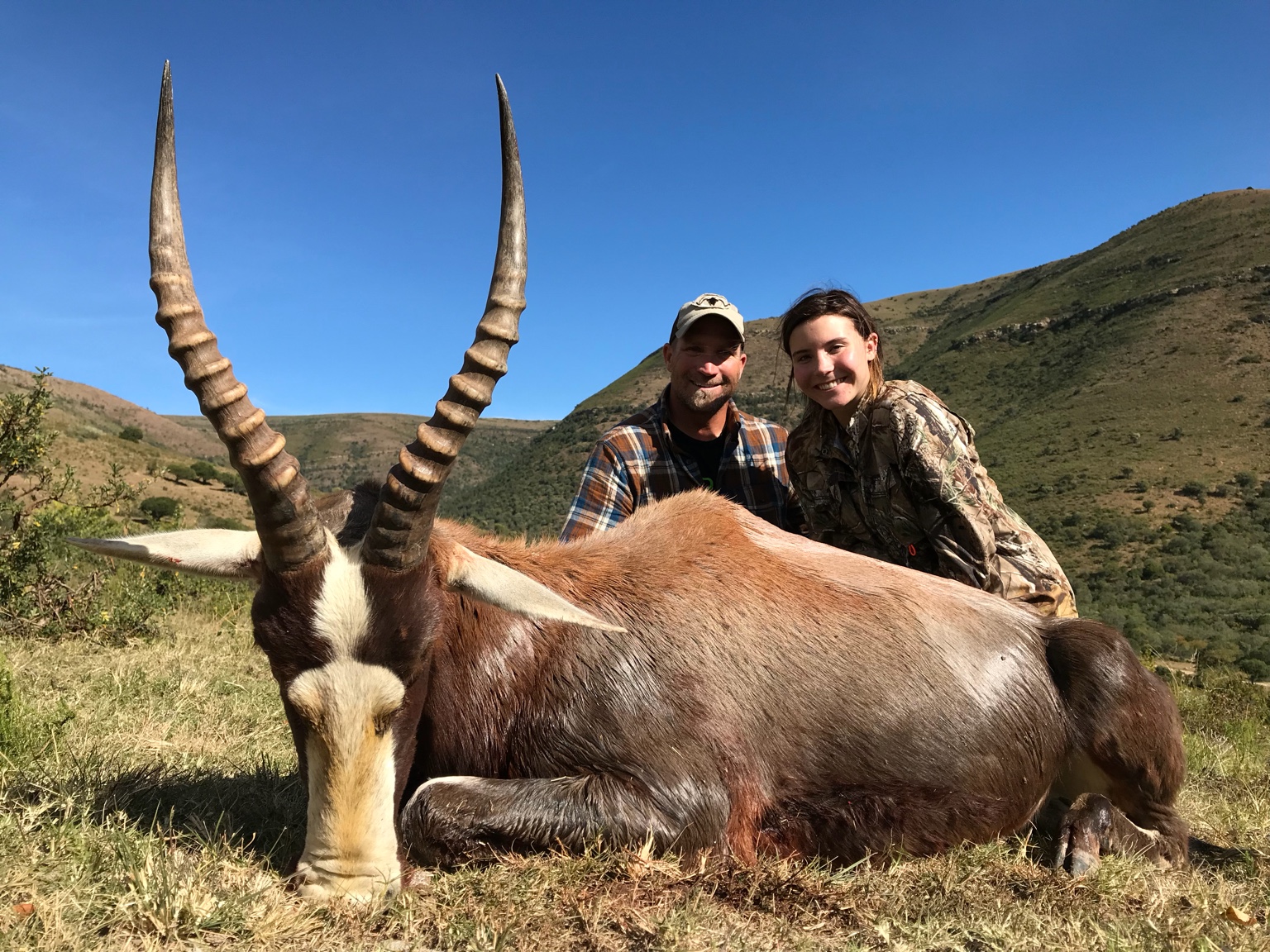 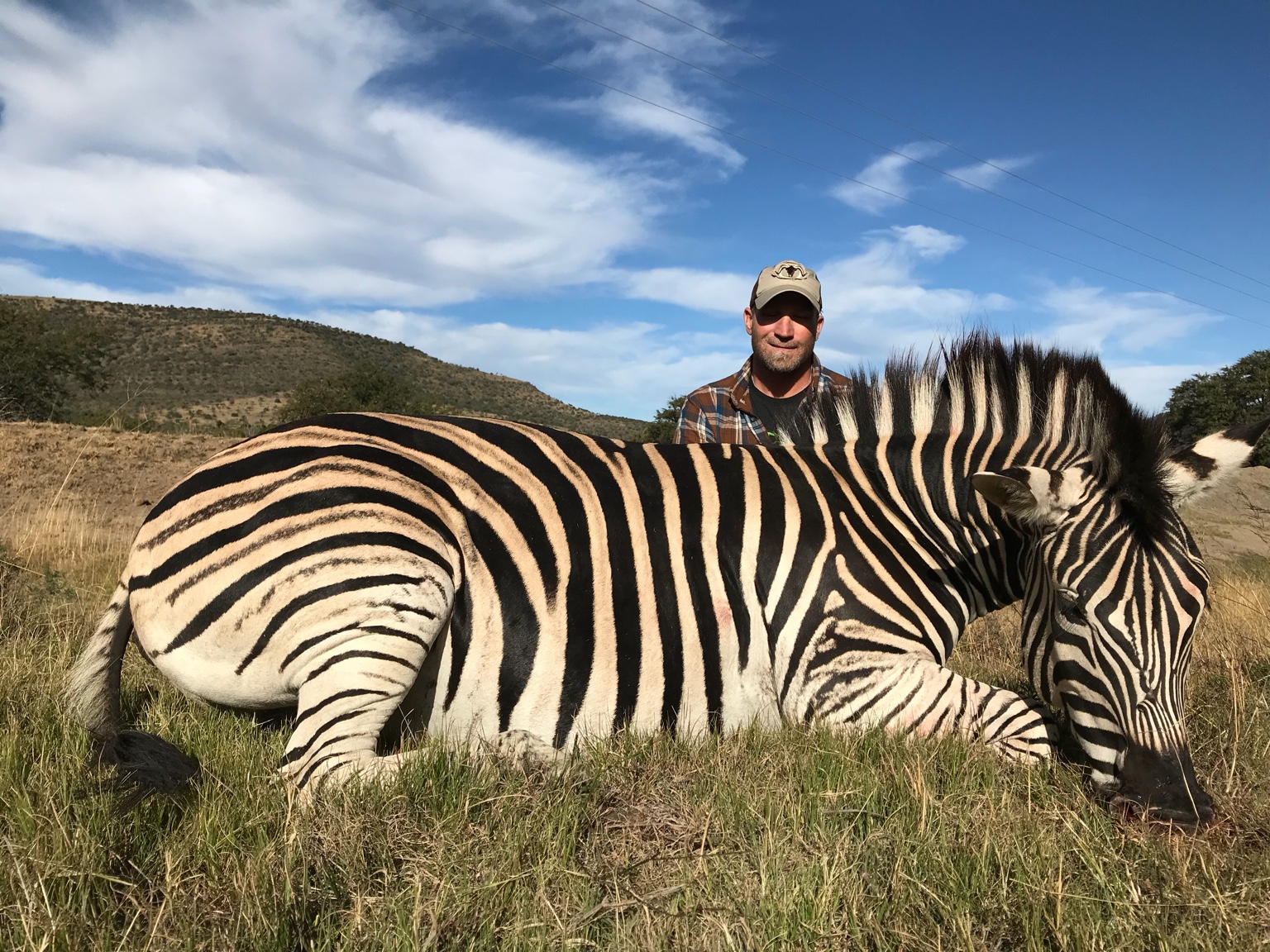 So far so good-can’t wait to see and read more. What bullet where you shooting?

Great start! Two excellent animals in the salt and it’s just day one

Very nice to have 2 trophies down on the first day. By the way that zebra looks to have long black stripes.

Great animals. I really like the zebra. Good shooting

Day 2 of my Safari, Willem and I decided to look for my black wildebeest, this I was really excited for, it is something I’ve always wanted, I think they are a very unique looking animal. Driving into the area we were going to hunt we spotted some very nice impala, we decided we wanted to make a stalk so we had to work the wind in our favor, we made it into 100 yards of this nice impala and I was able to make the shot, I never realized how beautiful these animals are, once again I rubbed my hand from nose to tail feeling the silky fur, it amazes me The different coloration and varieties of animals South Africa has, I am totally mesmerized by all the beauty here! After we took care of the Impala it was time to search for that black wildebeest, we came up on two old bulls separated from the herd we decided to make a stalk, but these animals are very weary and skittish, we ran out of cover to hide behind so we were stuck out in the open “busted” they started to move and Willem was able to whistle and get them to stop, 400 yards away with a strong cross wind blowing, I can say my shot wasn’t perfect but it slowed him down enough to keep him from running and mixing with the herd, we were able to get on the blood trail and find him down but alive, we pulled Brekkes the dog away from the animal and I put one last shot into him to ease his suffering, I couldn’t believe how strong these animals are, therefore I am very grateful I was able to harvest my beautiful bull! As we were heading back to drop the bull off for processing we came upon a steenbuck this animal wasn’t on my original list but as we saw him I said to Willem that’s a big one, he agreed and when the opportunity presents itself You take it. I was able to make a one shot kill and thus ended day three of my safari with three trophy animals that I will be proud to display forever.. #KUIUNATION 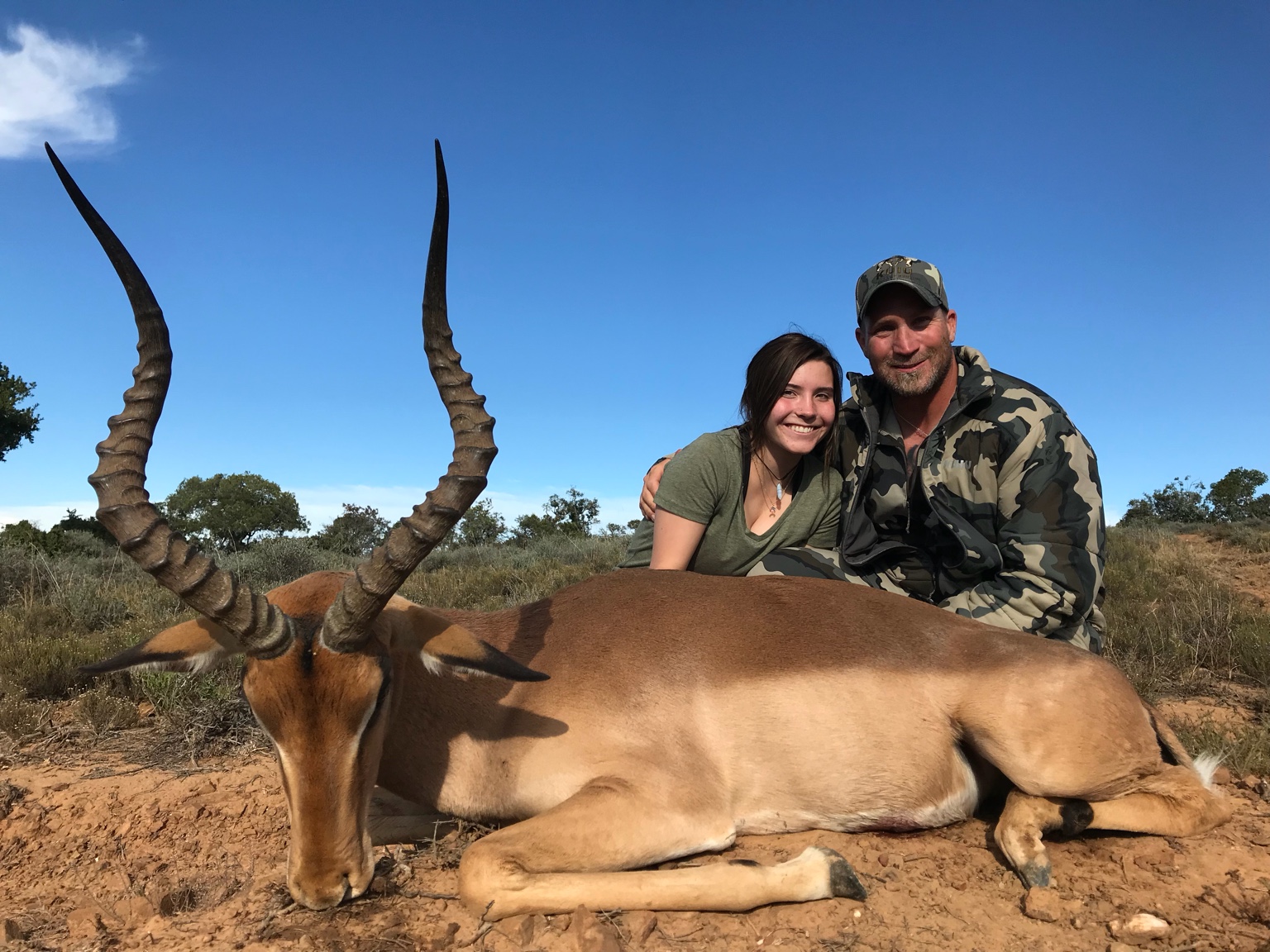 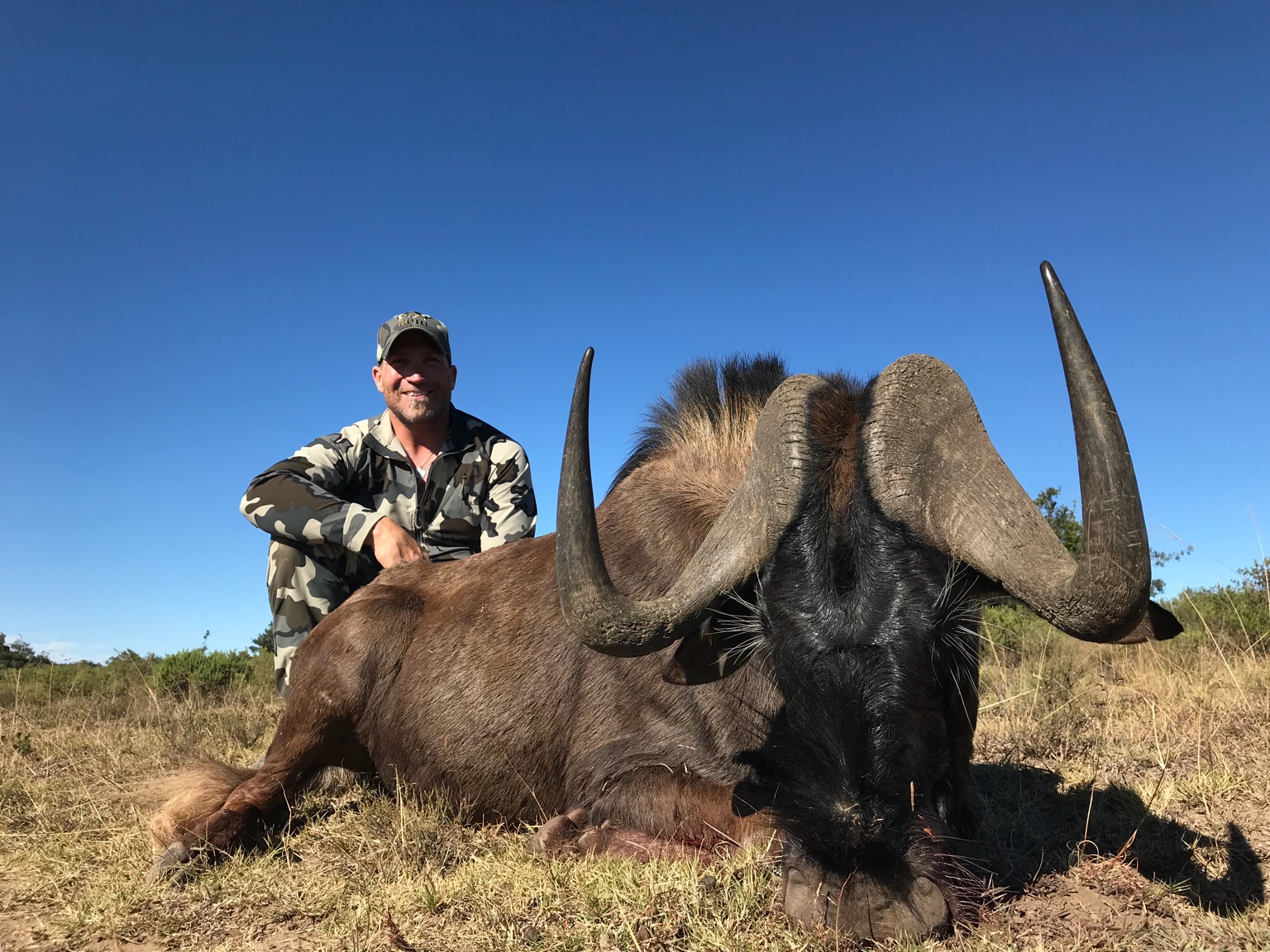 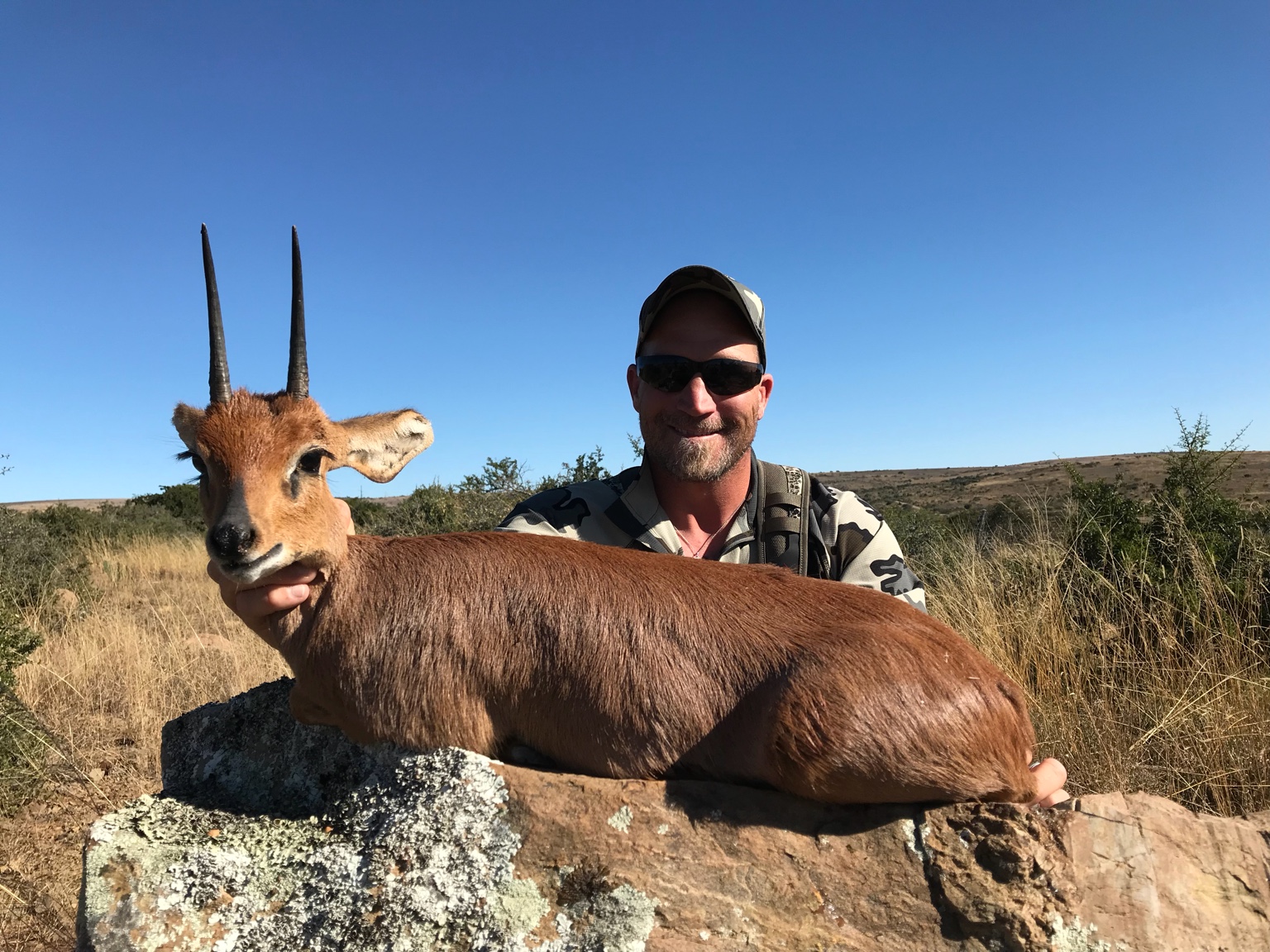 Who were you hunting with?
Bowhunter addict

jeff said:
Who were you hunting with?
Click to expand...

Day 3 of my safari, my daughter Baylee decided to sleep in this morning so Willem decided we should try an area close to the lodge that way we could come back around noon and pick her up for the afternoon hunt. We arrived to the area we wanted to hunt and immediately seen game, about 25 giraffes, I jokingly said “Baylees not here let’s get one of those “ I knew if I was to shoot one I would never hear the end of it, so we just watched these magnificent large animals for sometime. As we were glassing, Willem noticed a couple gemsbok and mentioned to me that we should take a closer look and see if there was one I would like to take, without hesitation I agreed we should see how they looked, we made our way closer and closer using the thick brush and wind in our favor, until we came to an open area with no way of getting closer, I decided that i would take the shot, Willem set up the sticks and I took aim, the shot was around 190 yards and slightly quartering away, I put the cross hairs center of the rib cage hoping to pass through the opposite front shoulder due to the angle, I touched the trigger and herd the loud “ whop” of a solid hit, but it was still on its feet and heading over the hill, we took chase and came to where it was standing, Nothing, no blood, nothing but tracks, so our professional trackers started doing what they do, deciphering tracks from one another. I look at the ground and wonder, what the hell do they see? I can’t tell a track from a flat spot in this dry hard terrain. That’s why they are the professionals I assume. We follow the tracks for a couple hours with out a single drop of blood, then they split up, Patrick follows one set of tracks and LoLo follows another, and I’m just wandering aimlessly looking into the thickets to no avail. Everyone circled back and met up with each other and talked over the mornings event, we came to the conclusion that I had missed the shot, no blood, no animal down. They explained to me how they were reading the tracks of the gemsbok, they told me that when an animal is hurt there toes spread out further to stabilize the animal. Well, with no blood, no signs of a hit they decided I just straight missed, don’t know what the whop sound was, possibly one of the many hard ant hills that’s cover this beautiful place. As we were making our way back to the truck, Willem grabs my arm and pulls me towards him, I figured he found the gemsbok, but to my surprise he said there’s a monster warthog right there at 80 yards, he pointed next to a thick pocket of brush, and said do you see that branch? I saw the branch but no hog, until a slight flicker of movement, he set the sticks up and I settled in, “aim to the left of that branch” Willem says! I squeeze the trigger, “he’s down” I hear him say, we walk up to the hog and that’s the first time I realized how big these things really are, I was mesmerized by this strange creature, with huge tusks and gigantic warts, I was very proud to have my first warthog and a perfect one to display in my home for the rest of my lifetime, We loaded him up and went back to pick up my daughter. We make our way back to the area the gemsbok were in and spotted a group of them again, we plan the stalk but these damn animals see every little movement and bolt, well we chased this heard for the rest of the day and the light was starting to fade, then all of a sudden Willem sees a slight bit of white in the brush, he throws up his binoculars and quickly says, there they are, 300 yards into the thicket. The stalk was on again, we make it into 100 yards and come to a clearing, “dust clouds”, they spotted us and they were off! Except one, I took the opportunity that I was presented and settled the cross hairs and touched one off, “it dropped” Willem says excitedly, we head over to where it fell and realized I had hit the high shoulder which sent a shockwave through the spine and paralyzed the animal, I took aim at the chest and quickly ended the torment of my shot, I couldn’t be more pleased with the animals I have been able to harvest, once again I thanked the good lord for the creation of these beautiful animals, thanked the animal itself, shook hands and hugged my friends and daughter. My daughter says to me “dad, I think I’m your good luck charm” I had to agree with her. Whatever it was, it was another wonderful day in Africa with some beautiful animals and new found friends! 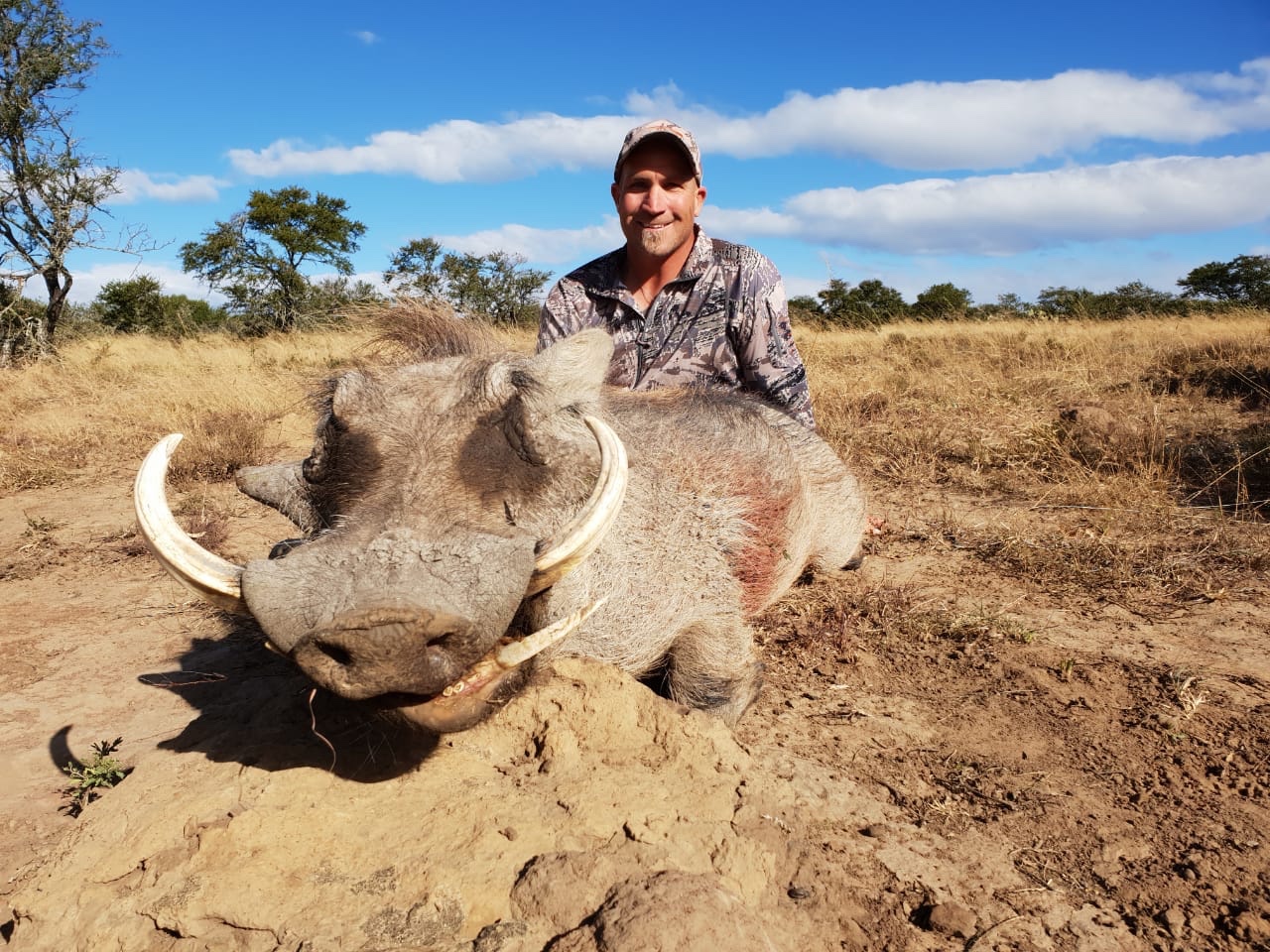 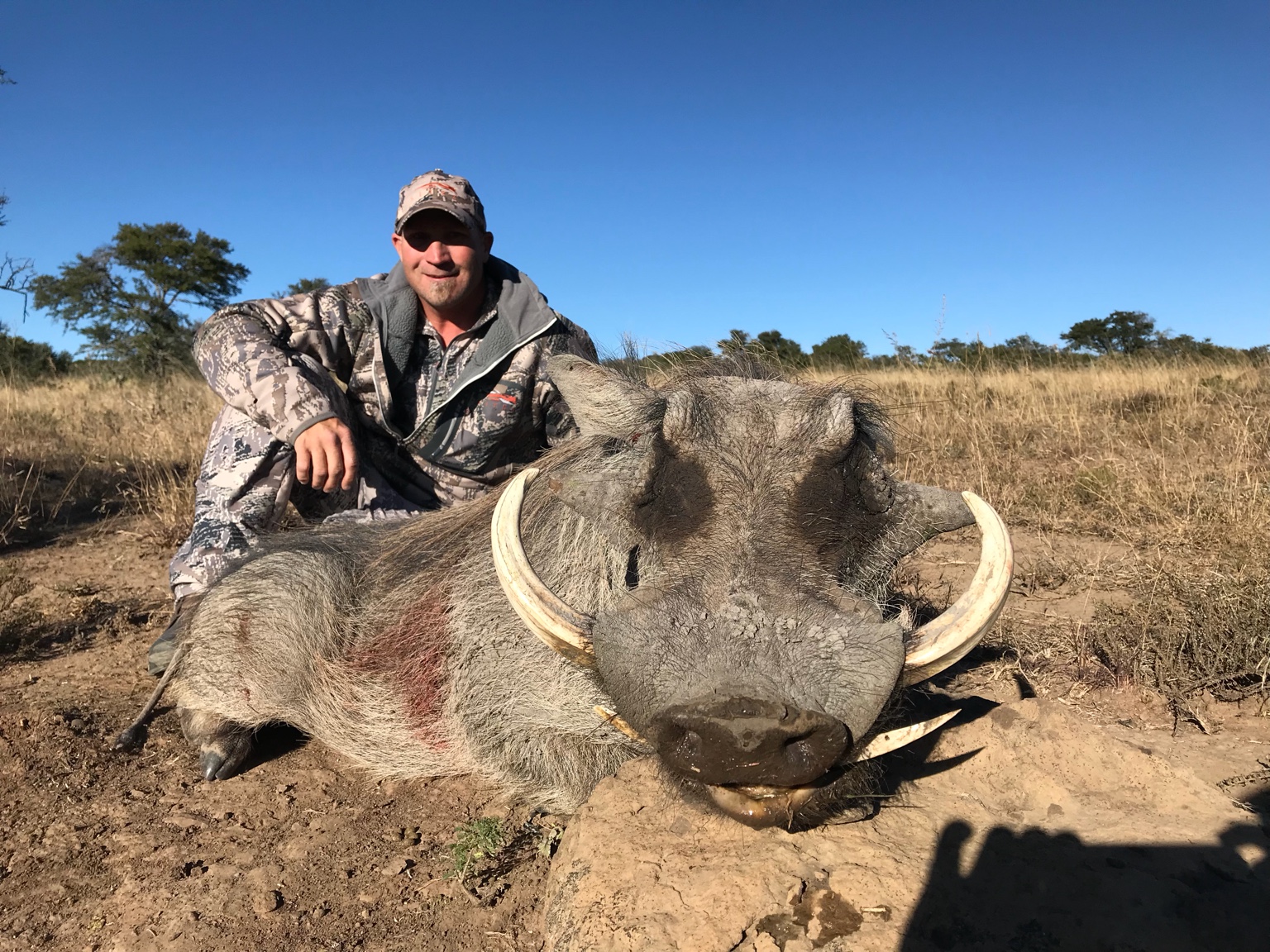 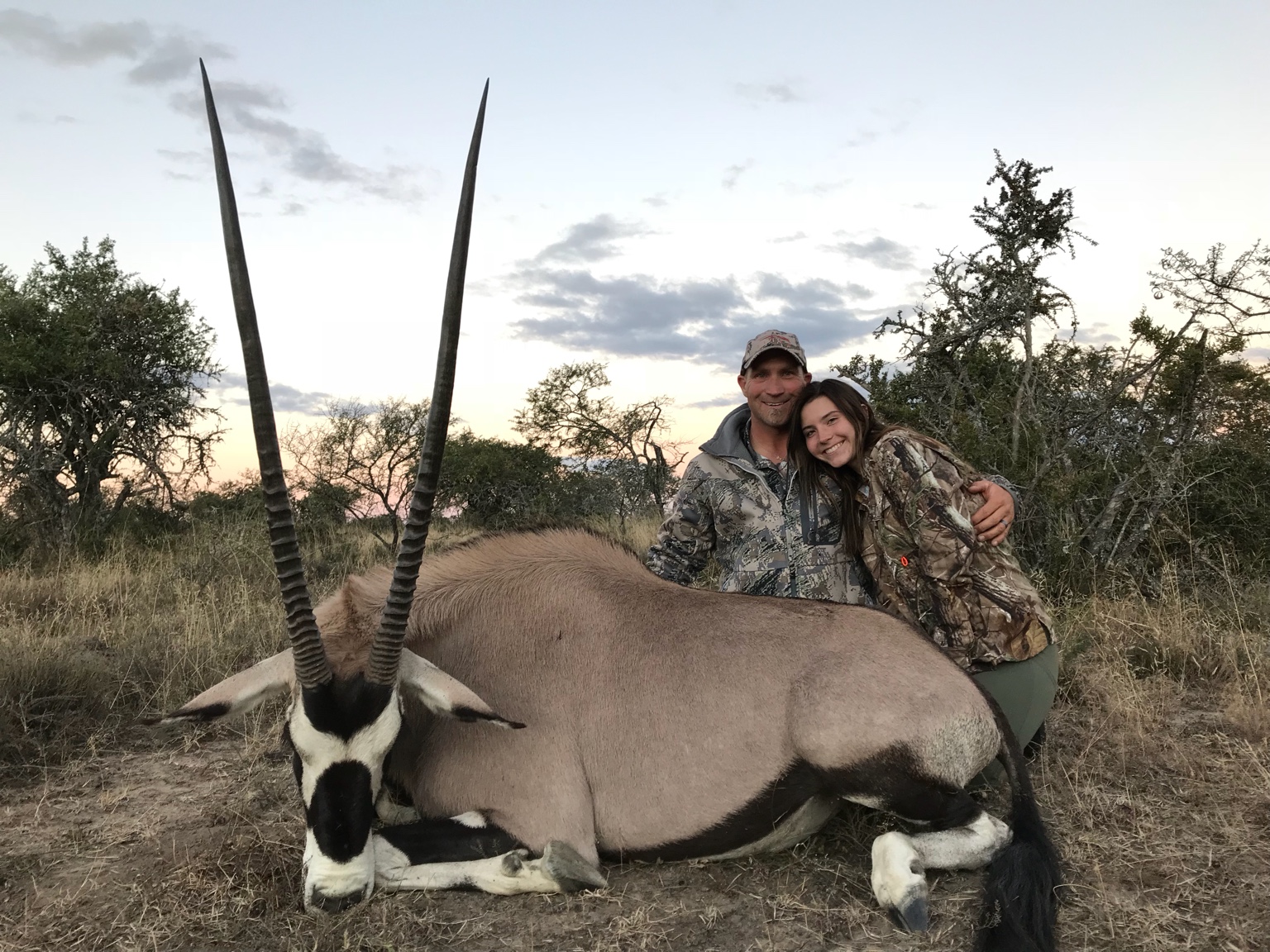 Dang you are really getting the animals. One of my safaris I didn't get a shot until late evening of the 3rd day. You have what 7 in 3 days? Congrats. Hope to see a few more pics.
Bruce

Wow, your off to a great start! Congrats on all the trophies, look forward to the rest!
John 3:16
B

Sounds like a great hunt so far. Can't wait to hear about the rest of the trip
Congrats

Good hunt sir! Thanks for sharing with the rest of us.

Nice report so far looking forward to the rest, looks like your first safari is off to a great start. 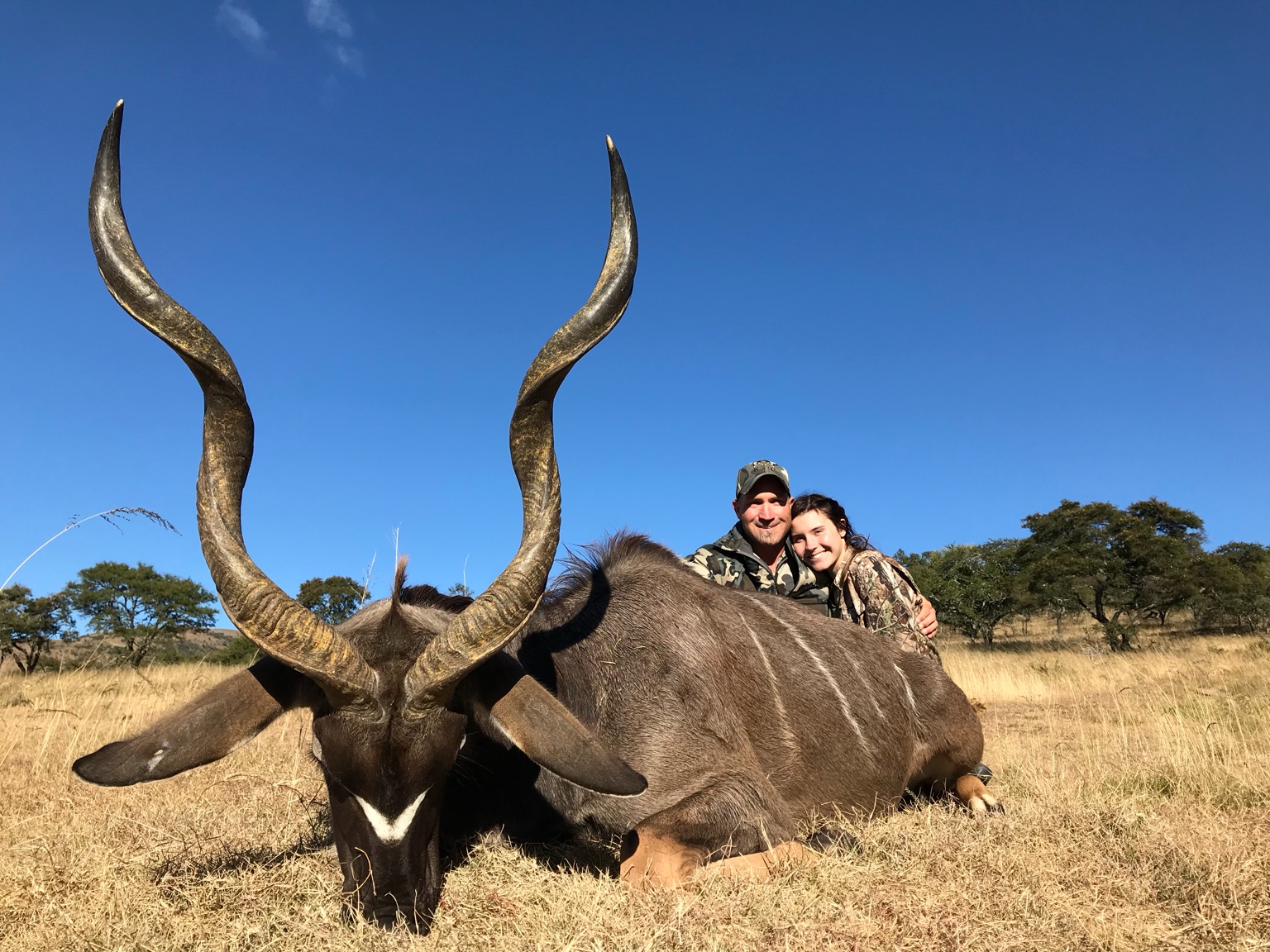 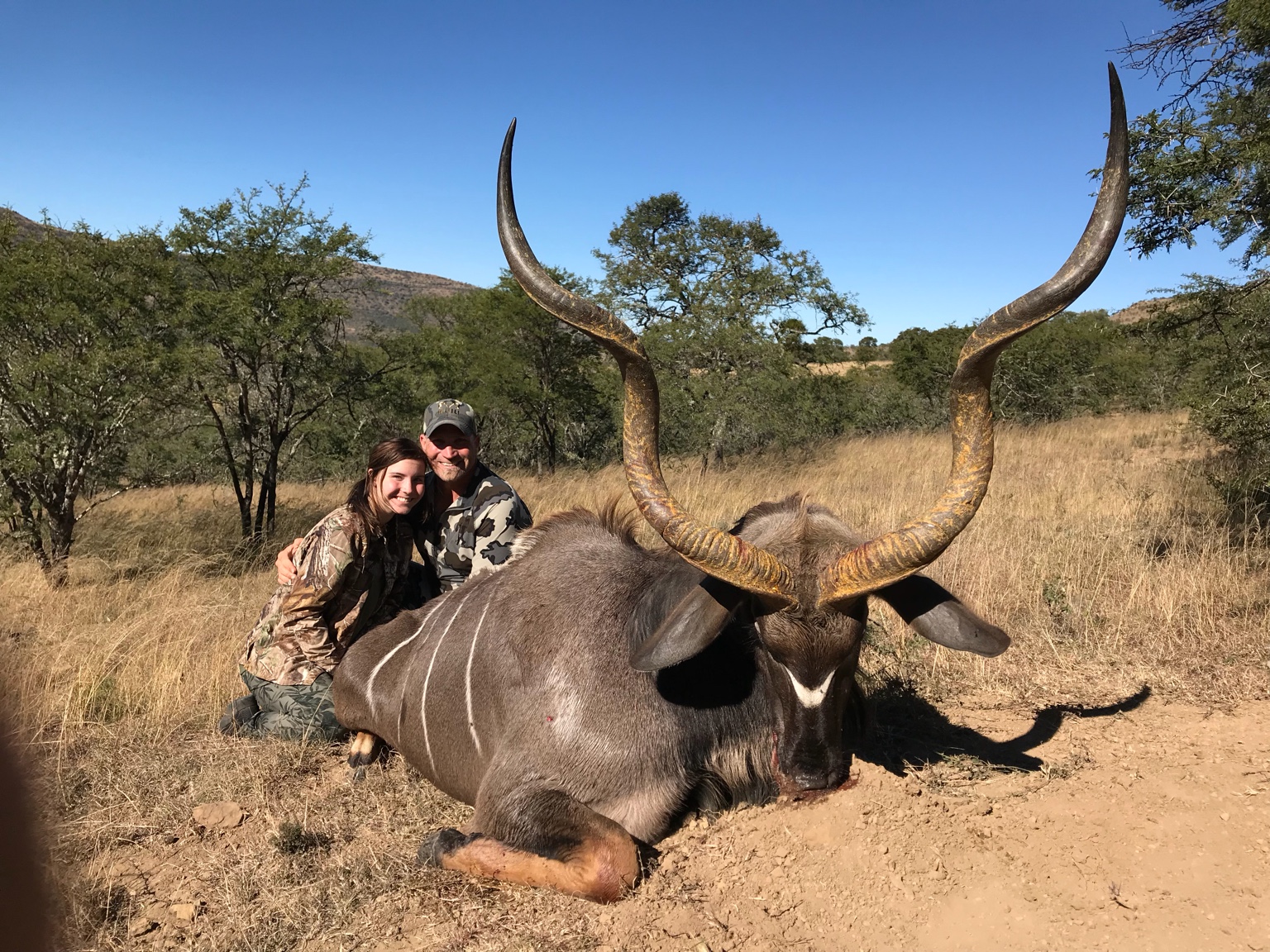 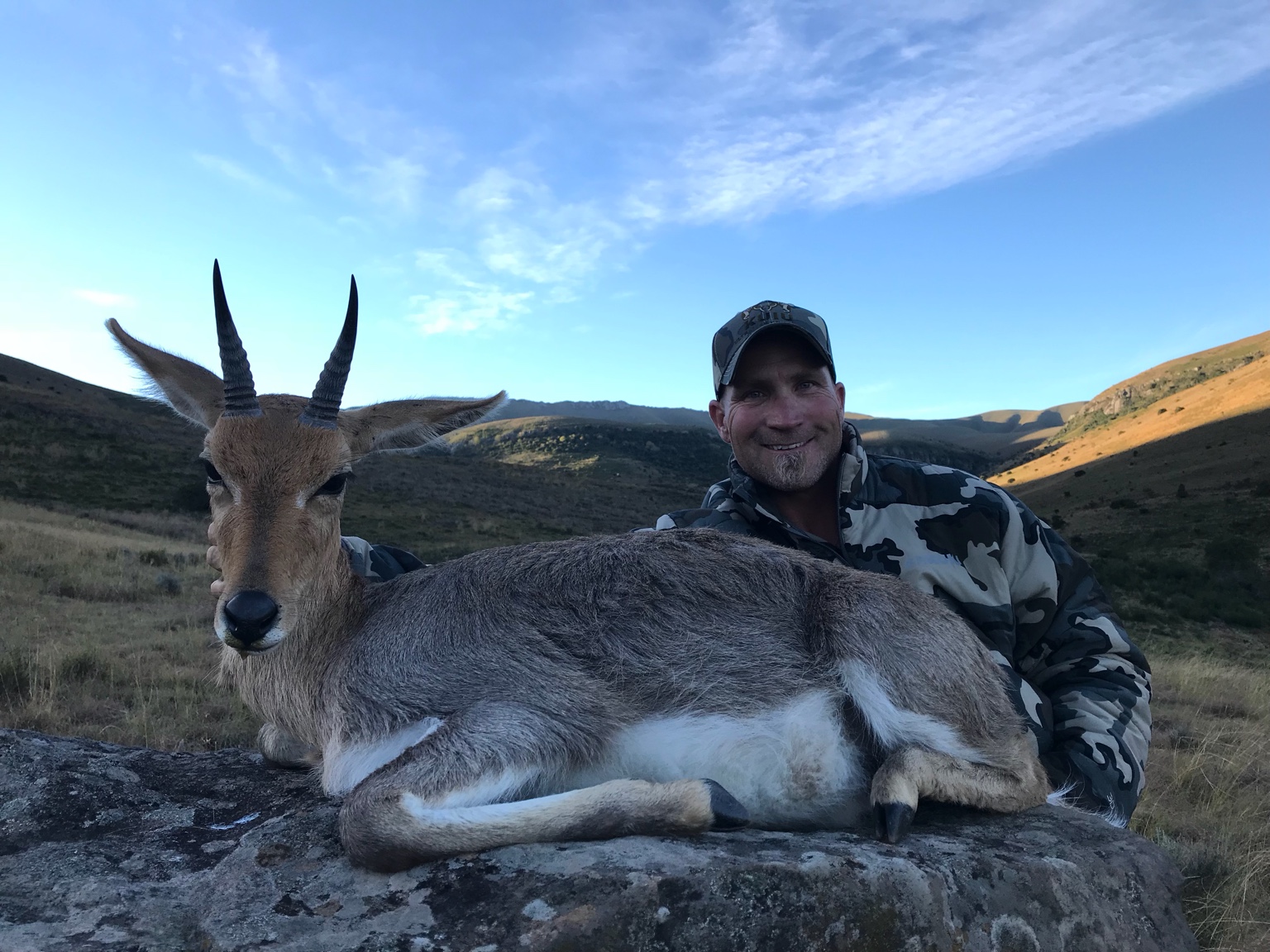 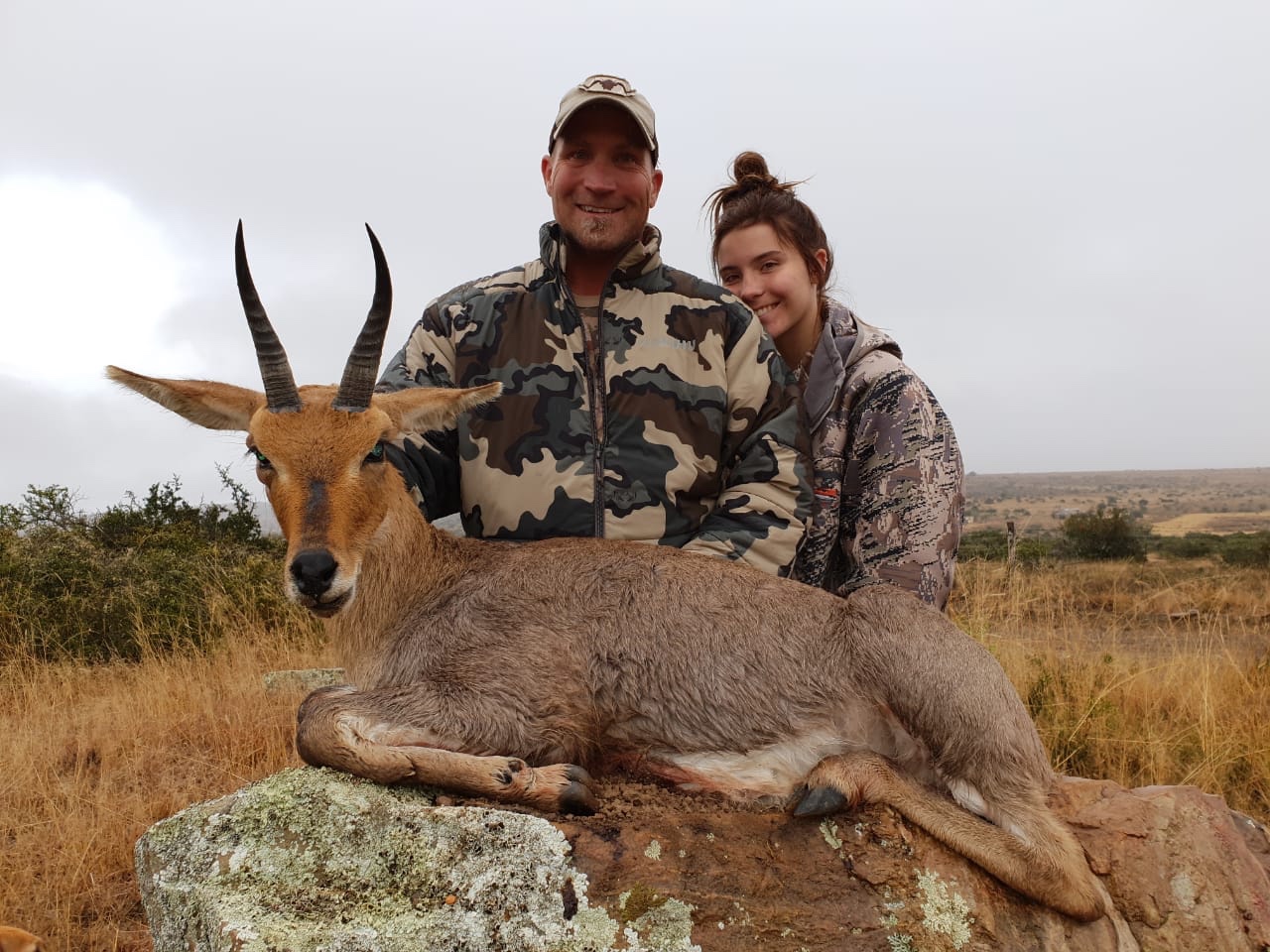 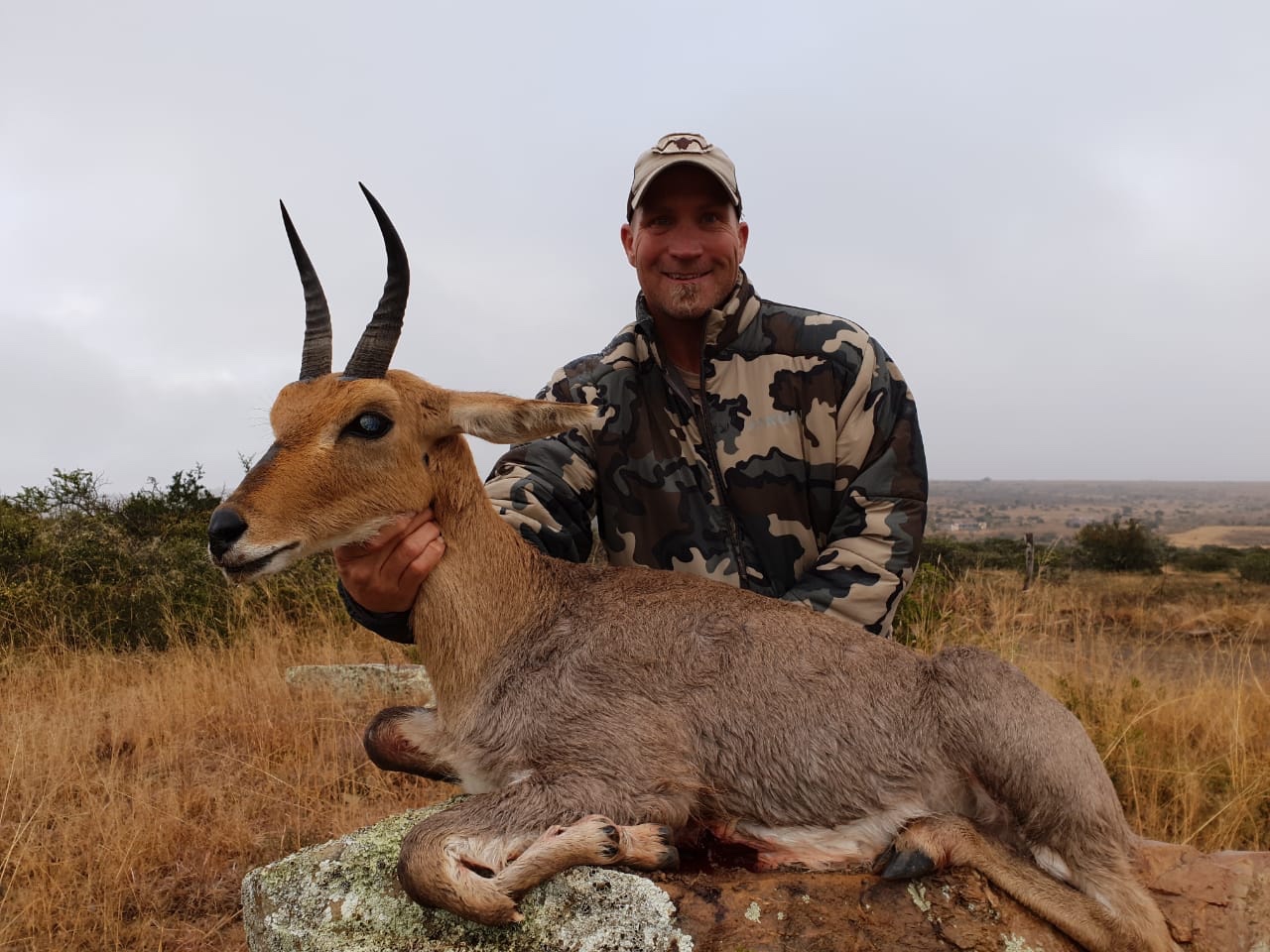 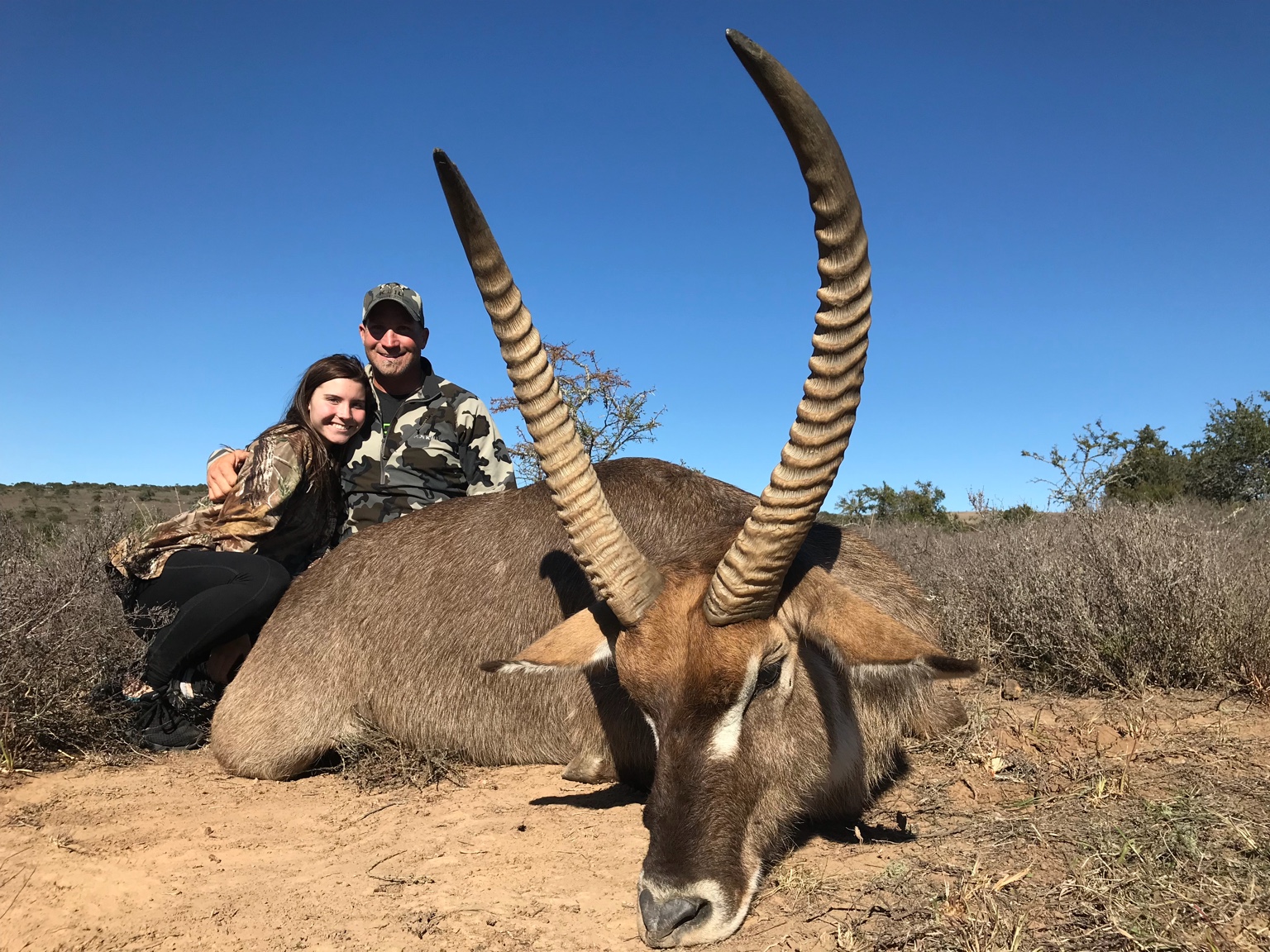 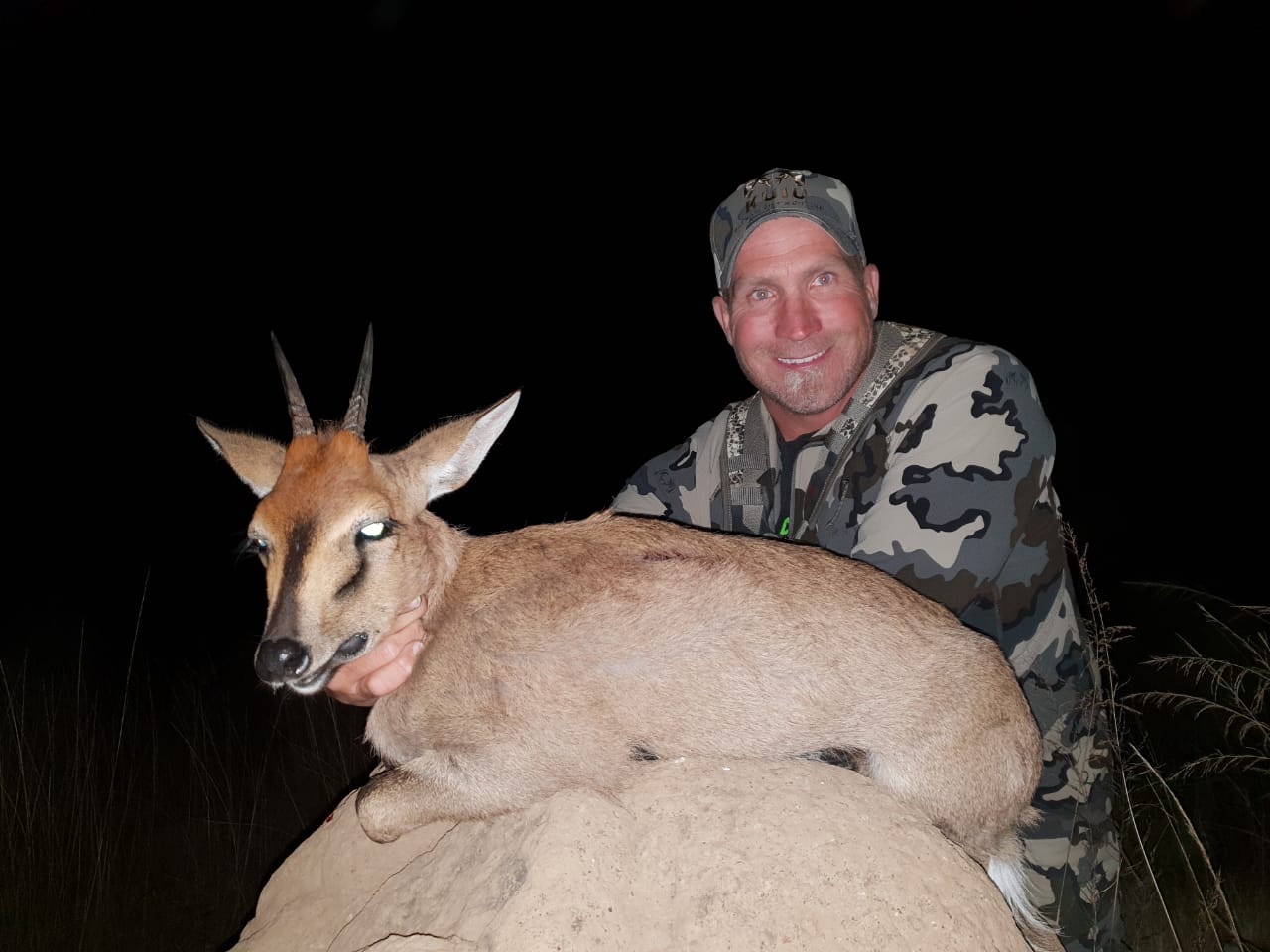 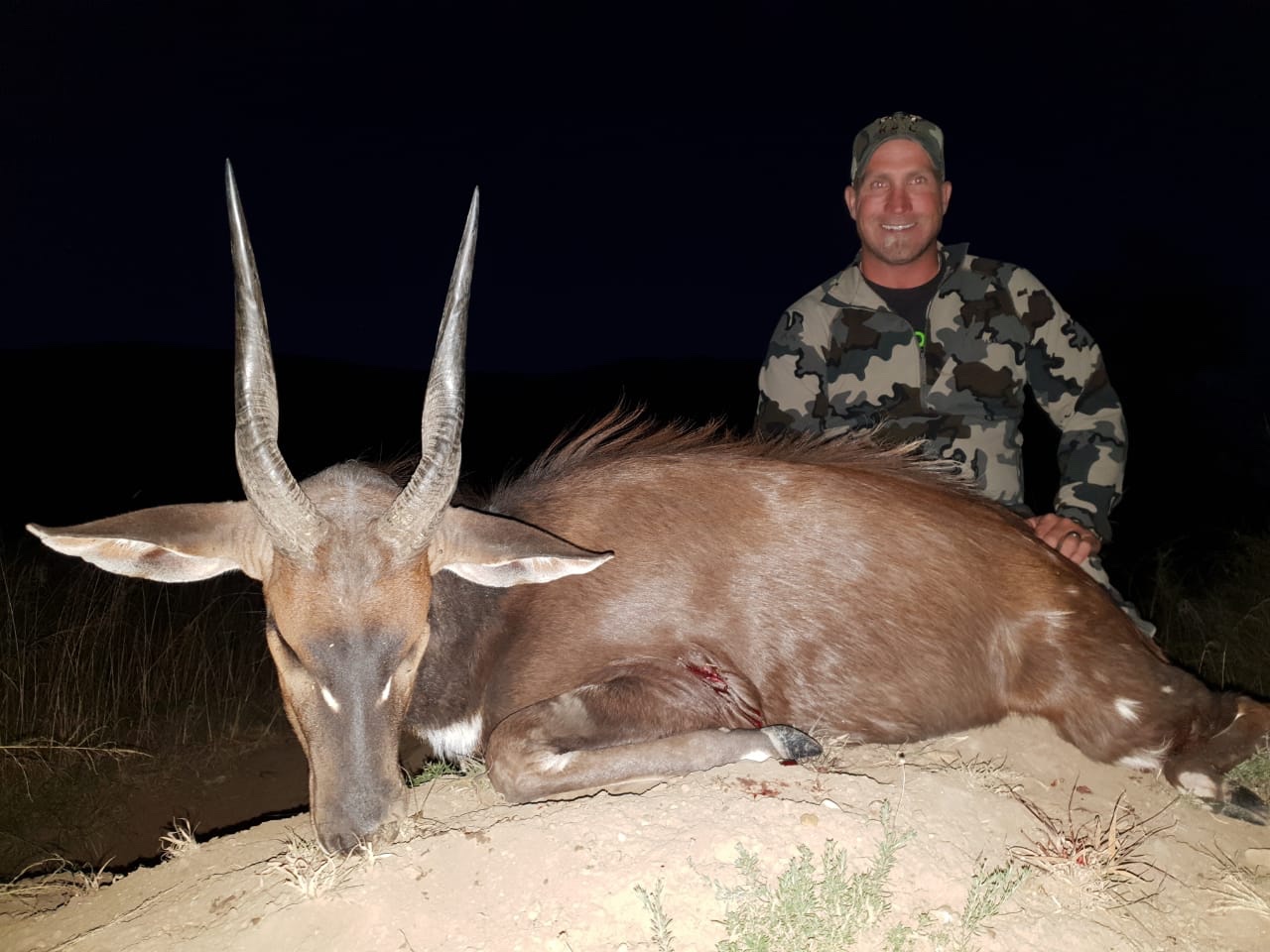 Congrats, who have had an awesome Safari!

Wow! That was amazing story-telling, it put me right there with you! Thanks for the visual descriptions and congrats on a fabulous hunt!

Dittos on the fantastic hunt and story telling. Thanks for sharing. You made some really lo...ng shots. Do you normally practice and hunt at those distances?
You must log in or register to reply here.