This journey began in January 2012, when i met Jacques at the dallas SCI show. I had been researching different outfitters for about 3 months, so i decided to go to the show to meet some of the outfitters that i had been in contact with. After meeting Jacques, we knew that we wanted to hunt with him. We went out with him and some of his friends and had a blast. We decided to book for June-July 2013.

June 28,2013 finally arrives and we make our way to the airport. Lori, at Travel Express did our flights and did a great job. We arrive in Kimberley, where we are greeted by Jacques. We load all of the luggage and are off to a new property that he picked up. We see gemsbuck, duiker and ostrich from camp that evening. The next morning, we go shoot the rifles to make sure theyre on, and we're on our way.

Day 1- Cloudy and very windy, so animal movement was a little slow. We still see plenty of animals but, don't get anything that morning. That evening, we slide into position on some springbuck. My wife takes a shot and hits a little low, through the bottom of the chest cavity. Bullet and Roxi track it, and she puts him down with a follow up shot. After we get back to camp, we learn that my dad also shot a springbuck.

day 2- Light winds and clear skys today, with animals running everywhere. Five minutes out of camp we spot a good duiker and he stops at about 100-150 yards. I shoot and have my first african animal on the ground. That morning, my dad shoots an impala. that afternoon, i miss a black wildebeest. After that, we spot a gemsbok and my wife makes a perfect shot on him.

day 3- This morning im sitting in a bow blind with johanness. We have duiker and blue wildebeest come in and then, a big kudu bull. He quickly tells me that hes a shooter and then i spook him by nodding my head. he eventually starts to come back in but hangs up at 39 yards. for some reason, 39 yards sticks in my head, even after he works his way to 20 yards. I use my 40 yard pin for a 20 yard shot. My arrow goes right over his back and i cant figure out what went wrong. As we get out of the blind, i realise what I did. now im a little dissapointed in myself! When we get back to camp, we get to see my dads gemsbok. They have really nice gemsbok!
That evening, we go looking for black wildebeest. We find 4 huge bulls standing together and decide on the bull that i want. We work in to about 300 yards and i take a shot. The shot is on the shoulder but a bit too far forward. He takes off and once he stops, I shoot again. The shot hits at his feet and he takes off again. He lays down, so we move closer for another shot. I shoot again and put him down. My dad shoots a big kudu so, we go to take pictures and help them load it.

day 4- We hunt the morning before heading to Jacques main property. This morning i shoot a steenbuck, just before leaving.
This afternoon we see a lot of animals but no shooters. My dad makes a good stalk with Ruan and shoots a nice blesbuck.

Day 5- This morning, my mom shoots at her first animal, EVER! She shoots a blue wildebeest but, they aren't able to find it.
This afternoon, my wife and Jacques make an intense stalk on a group of blue wildebeest. After another perfect shot, its down in about 100 yards.
While looking for my moms blue wildebeest, they came up on a group of red hartebeest. There was a big bull with them, so my mom tells my dad that he might as well shoot it. After a good shot, they call another truck to come pick it up.

day 6- We are on the hunt for kudu this morning but, we find a group of impala. We stalk to 150 yards and i get set up on the sticks. We wait about 10 minutes for a shot and then they walk out of the clearing. We slowly reposition and set up for the shot. Boom, i blow it! Now im really disgusted with myself! We go back to camp for a quick lunch and then they drop our camera man Frieky(I probably misspelled your name, sorry) and myself off at a blind. we have a few waterbuck cows come out for about 20 minutes before a beautiful bull walks out. Frieky asks if i want to try for the waterbuck with my bow. I asked him to text jacques to make sure that i could shoot the waterbuck in the place of my kudu. Before jacques had a chance to reply, the truck pulled up to take me out for the evening. We drive a while and then decide to get back in the blind in case the waterbuck bull showed back up. We saw impala, mountain reedbuck, springbuck and blue wildebeest. Finally, we see waterbuck cows moving across an opening at 200-300 yards. Out of the 5 cows and bull, only the bull and one cow come in. He starts trying to mount her, and frieky tells me the distance. They move again, he tells me which pin to use. The female decides to take off and the bull chases her off out of sight.

Day 7- We really look hard for kudu this morning but, dont get a shot. We get set up on the edge of a clearing with a blesbuck working his way toward us. He gets to around 150 yards and jacques tells me to shoot. I hit him and the dogs take off after him. He makes it a few hundred yards and goes down.
They bring us lunch and drop Frieky and I off in the blind. at 2:30, we see 2 waterbuck cows and 2 calves working their way in with no bull. About 30 seconds later, Frieky looks at me with a big smile and says "Here comes the bull". he told me to get up and get my arrow ready. i was so nervous that i told him i couldnt shoot yet. I dont think that i have ever been this nervous. He was at 20 yards but we had to wait for a good shot. He eventually worked his way to 10 yards slightly quartering away, but had a calf behind him. As soon as he cleared the calf i drew back, settled my pin, and tapped my release. My arrow hit just behind the shoulder, and buried almost to the fletchings, with the broadhead barely poking out the other shoulder. We watched him run about 200 yards and stop behind some trees. The cows and calves took off but, he stumbled, fell, and was done. When we got out of the blind, Frieky had a message from Jacques saying that Brittany had shot an impala. they made a great stalk and she shot off of his shoulder. Everyone came out after i shot the waterbuck and I found out that my mom had shot and recovered a blesbuck. Jacques didnt want her first hunting experience to be negative so he gave her a blesbuck! She was pumped! Jacques really is a stand up guy.

I can't put into words how happy we were with the way our hunt went. Jacques and Ruan will do whatever it takes to make sure that your stay at hartzview is perfect. I wouldnt change a single thing about the trip(except my shooting), and i dont think it can get any better than Hartzview hunting safaris. Thank you Jacques for the trip of a life time!

The accomodations were amazing and the camp staff was extremely nice and helpful. We had Frieky with HP productions as our camera man, he was very entertaining and a great addition to our safari. He is also a PH so he was very knowledgeable and helpful as well.

Bullet and Roxi are simply amazing! i couldn't believe how well they did tracking our animanls. There were a couple that we wouldn' have found without them.

I also have to add that you will eat VERY well while you're at hartzview, Herbert is an amazing 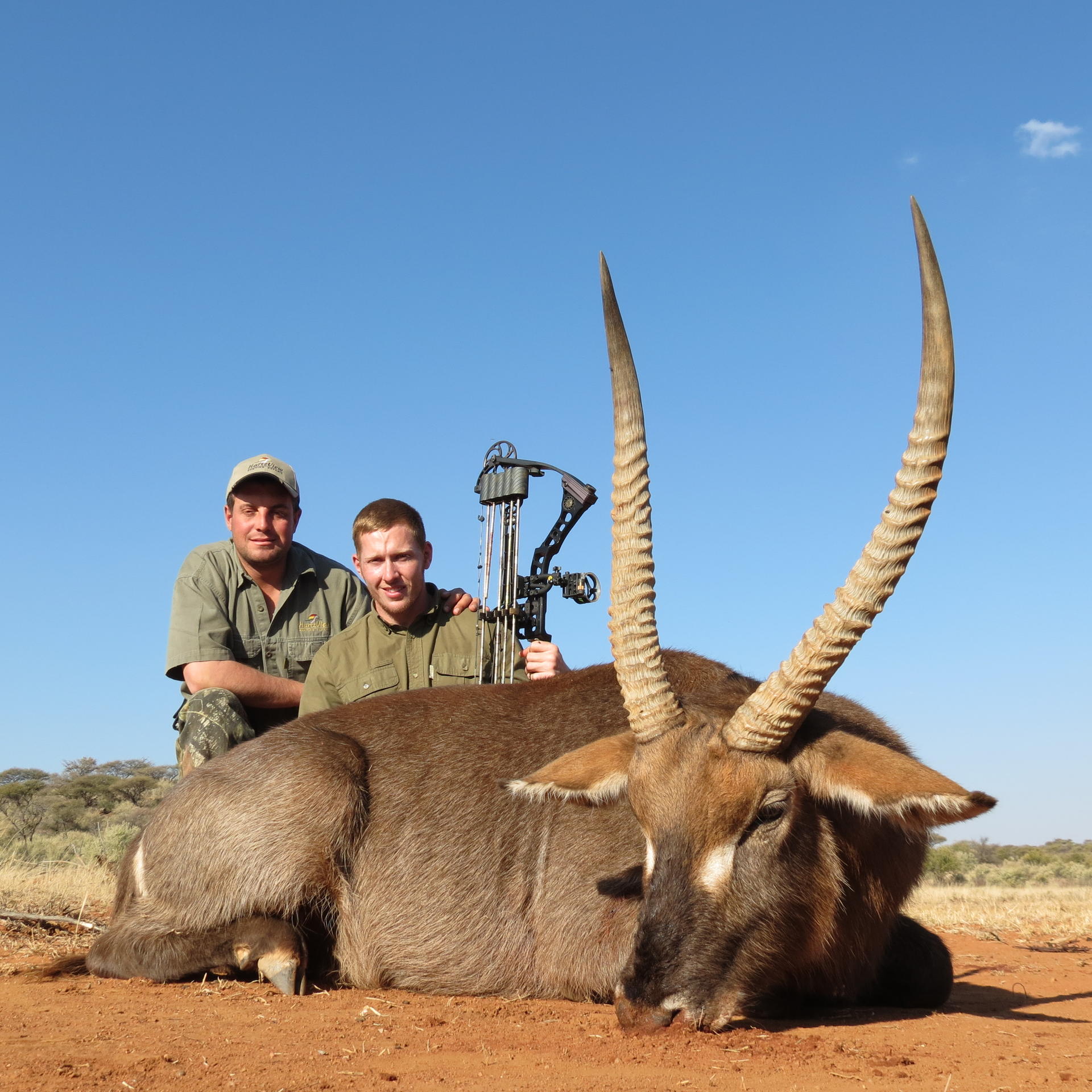 Love the story and pics, congrads to you and your family!
Nathan T.

Well done Jared! Hopefully we'll get to see and your wife in Dallas again this year so you can retell the story.

Glad you had a great time...bet you'll be back. Jacques runs a top class outfit.

Thanks for the hunting report and trophy pictures!
Jerome Philippe, Founder of AfricaHunting.com
J

Thanks guys! Phil, we will be in Dallas for the show in January. Jacques said that we'll make reservations at Dicks last resort one night

Jrshuman said:
Thanks guys! Phil, we will be in Dallas for the show in January. Jacques said that we'll make reservations at Dicks last resort one night
Click to expand...

Sounds like a plan. If I remember correctly you live closer to Houston than Dallas. But if you could make it up Friday night for the AH dinner, we'd love to have you. See you in Dallas!

Congrats to you and your wife Fantastic trophies! Thanks for sharing Can't wait to read the other half.
Enjoy Life Now! It has an Expiration Date.

What an experience to be able to share with your family. Good for you.

Congrats for a great hunt and very nice trophies.

Well done Jarred! Sounds like you are definately hooked now! Thanks for the report and pictures.

Thank you guys for booking the safari with Hartzview Hunting Safaris, we certainly enjoyed hunting with you guys and we are looking forward on having you back in Africa soon!

Looking forward on seeing you guys in Dallas and to our night out to Dick's!!! haha

Great report.... Sounds like an awesome trip with wife & folks. I'll be at Hartzview next May... Can't wait!

Phil, count my wife and I in for the AH dinner on Friday night.

great report jared
backed up with outstanding trophy photos
thanks for showing us mate
what a family holiday ,its great that your mum took the challenge
sounds like you guys had quite the experience
THE HUNTER; The person that pays over 90% of the cost for the presavation and maintance of wildlife and gets zero credit for it ................

Just my luck I can't get them to open, maybe later as I love drooling over pics.:drooling:
Enjoy Life Now! It has an Expiration Date.
J

Nice pics Jared! The pic of your mom with her blesbok sure looks familiar, I'm quite certain we passed by that spot.