Quite the hook on that Warthog.

Nice looking pig. I have been to Africa 3 times and still have not taken one. Really didn't care the 1st couple of trips. last one was a 10 day hunt and never found a good one to shoot. Congrats. Bruce

Thanks, now to figure out what to do with them tusks, seems the wife isn't so keen on me putting a knife and fork attachment for each time dinner is ready, wimmin, go figure

Gizmo,
That would be a hell of a deer in Texas....but then again there wouldn't be a Texas if the Alamo had a back door.

Congratulations on a great hunt!! Kevin

Welcome to AH Ty.
Share some of your tales and photos from Africa with is when you get a moment.

Welcome to AH. Enjoy your sense of humor.

Also enjoy your moniker.
And here I am, returning to Africa of many faces;.... the sloe-eyed temptress with flowers in her hair who stole my youth and my heart, and left me an old man with a kaleidoscope of conflicting memories of many dashed hopes and some fulfilled dreams. E. Echols

Dobber,
Here is the real question. Did you enjoy yourself enough on this hunt to go back and hunt with your Outfitter again? Looks like you had a great time and your comments indicate your were happy with all trophies taken.
I appreciate the fact that you are sharing your report with everyone. Please keep it coming.
Hope all the scrapes on your legs are healing up!

dobber said:
Thanks, now to figure out what to do with them tusks, seems the wife isn't so keen on me putting a knife and fork attachment for each time dinner is ready, wimmin, go figure
Click to expand...

Mount them on a plank and make a cap hook!
Life's a journey, enjoy the ride

That is fine warthog....very mature, with character.

Rhinoster Hoek Safaris said:
Mount them on a plank and make a cap hook!
Click to expand...

Off for Springbok and to be humbled
We went off to the Karoo today for springbok, easy stuff, seen loads of them in the travels, heck they just stand there or if they run, only a short distance and stop. In saying that, they weren't the target animals at the time.
We drove up and over the ridge, parked in the valley where some trees were to hide the truck a bit, then for whatever reason walked back up the ridge (remember how much i had already walked during the week) spotted a herd and found a shooter in the mix, a nice stalk closer to them and for whatever reason they ran, and ran, and ran until they were out of sight and a long way off. So plan 2, Atti and Deon were going to try and locate them and push them back to our side of the ridge, so we were set up under a nice tree enjoying the day waiting for them to come down. After about 30 minutes we could see them coming our way, a lot more of them now so up with the sticks, out with the bino's to find the shooter. Ok its the 5th one, now its the 7th one, wait he pulled ahead its the 3rd one, its the 5th one again, talk about crazy lol, animals running along, not at a high speed though, but trying to pick out the right ram was tough. Coming in closer and closer now, things settled down a bit in the herd and they were on a slow trot, would be passing us within 50 yards. Well even with all the time it took them to get here, i was settled in and i shot behind him, not once but twice. Then they were off and running at full speed. 3 or 4 more stalks got us close, but not close enough, every time we were almost ready, they would move.
Back to the truck and water was needed to quench the thirst. We took the truck further back and saw 2 rams, one worthy of a shooter so another stalk was on. Every time we got close, they disappeared taking us further and further away. On the way back it looks like they circled us and he was standing in an open area, but 150 yards, i was winded, i was sore, i was getting frustrated and i missed again, damn it all to hell. Shot just under him, could see the puff of dust and off they went again.
The day was passing us by and i had missed on 2 different occasions, frustration was weighing on me but Lammie, Atti and Deon were keeping me in good spirits.
Down the ridge to the valley where we originally parked the truck for a regroup and new plan, did a short walk, that became a stalk on about a dozen ewes and that ram. We knew he was the same one as he was lighter in colour than the others we saw. Got to within 100 yards, up with the sticks, scope set on 9X, deep breaths, front shoulder, squeeze the trigger and all i saw was the puff of bullet hitting dirt. I hung my head
While my head was hung, i heard Lammie say he's down, guess i did hit him, he went about 30 yards and rolled, doing a nice summersault with a half gainer, but failed on a clean landing, and i missed it lol
Man what a switch in feelings
I did take pictures, don't have them loaded yet, and one or two of them aren't very pretty, big hole going in, bigger hole coming out. Did get a couple of pictures of the hair standing up on his back with my cell phone though
Another amazing day with the highs and lows, but by this time of the hunt, my legs were hurting. Glad i listened to the PH in the morning though, he says wear pants due to them boot sticker cactus, them dang things just seem to jump out of no where and stick in, so very glad i only had to pull them out of my pants and not out of my legs

Congrats on the springbok. Looking forward to the photos.
And here I am, returning to Africa of many faces;.... the sloe-eyed temptress with flowers in her hair who stole my youth and my heart, and left me an old man with a kaleidoscope of conflicting memories of many dashed hopes and some fulfilled dreams. E. Echols

I'm glad the agony of defeetwas followed by the thrill of victory.
Keep it coming Dobber!Enjoying your report

alright i figured out how to get the pic up, albeit at the expense of me doing work 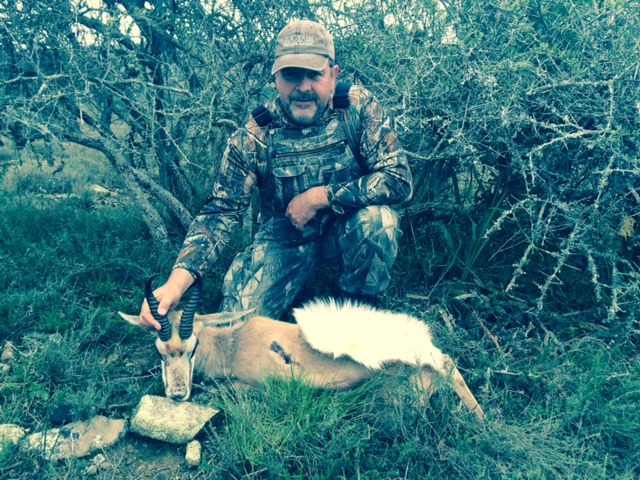 B
SOUTH AFRICA: Tootabi Hunting Safari My Trip In June
2