Glad you got the blue amd were able to put an end to its suffering. It's never fun to have to deal with that as a hunter...
HUNTERS make importation bans work!

Unbelievable that the springbok being such a small animal was so tough!

After loading up the springbok in the truck, we decided to chase wildebeest.

There were two separate herds of probably 40 or so animals each. Since we could never get closer with the vehicle than about 500 yards or so. We tried something else. Chris and the PG exited the truck and walked out to a small high point in the suvanna. They made a prone position to be able to cover a large area. The idea was that the tracker and I on the vehicle would try to run them in a direction that would put them in range of Chris and his .300. We worked this idea for about an hour and had no luck. The herd would not go any direction in which we wanted. The two separate heard did converge though creating what was not around 100 animals. In one case the whole herd ran so far we lost them completely.

Time to go to the farm house and have lunch!

Once returning to the hunting area, we decided to hunt the thicket areas. We saw lots of animals including impala which I was after. We must have seen 4 or 5 species always running in herds, never having a shot. After an hour or so we ended up on a very long vehicle trail in which we could see impala crossing it one at a time 200-300 yards ahead. Way too far for me to take a shot. After a while we very slowly moved up the road closer to the crossing point. But as we got closer, they would now run across the road. After watching them for a while through binos, we determined that most of them in small groups were actually coming our direction after crossing, but then going into the thickets. After figuring this out, we then concentrated on watching the thicket on our left side. It was only a few minutes more until the PH and I saw a male coming though with a group of females. He was moving but not running. I aimed between some small trees and fired. He moved about 15 yards further and fell dead. When we approached the site where he was shot. A part of the heart or lung was hanging on a bush, with massive blood covering the ground. Needless to say, tracking him 15 or so yards was very easy. 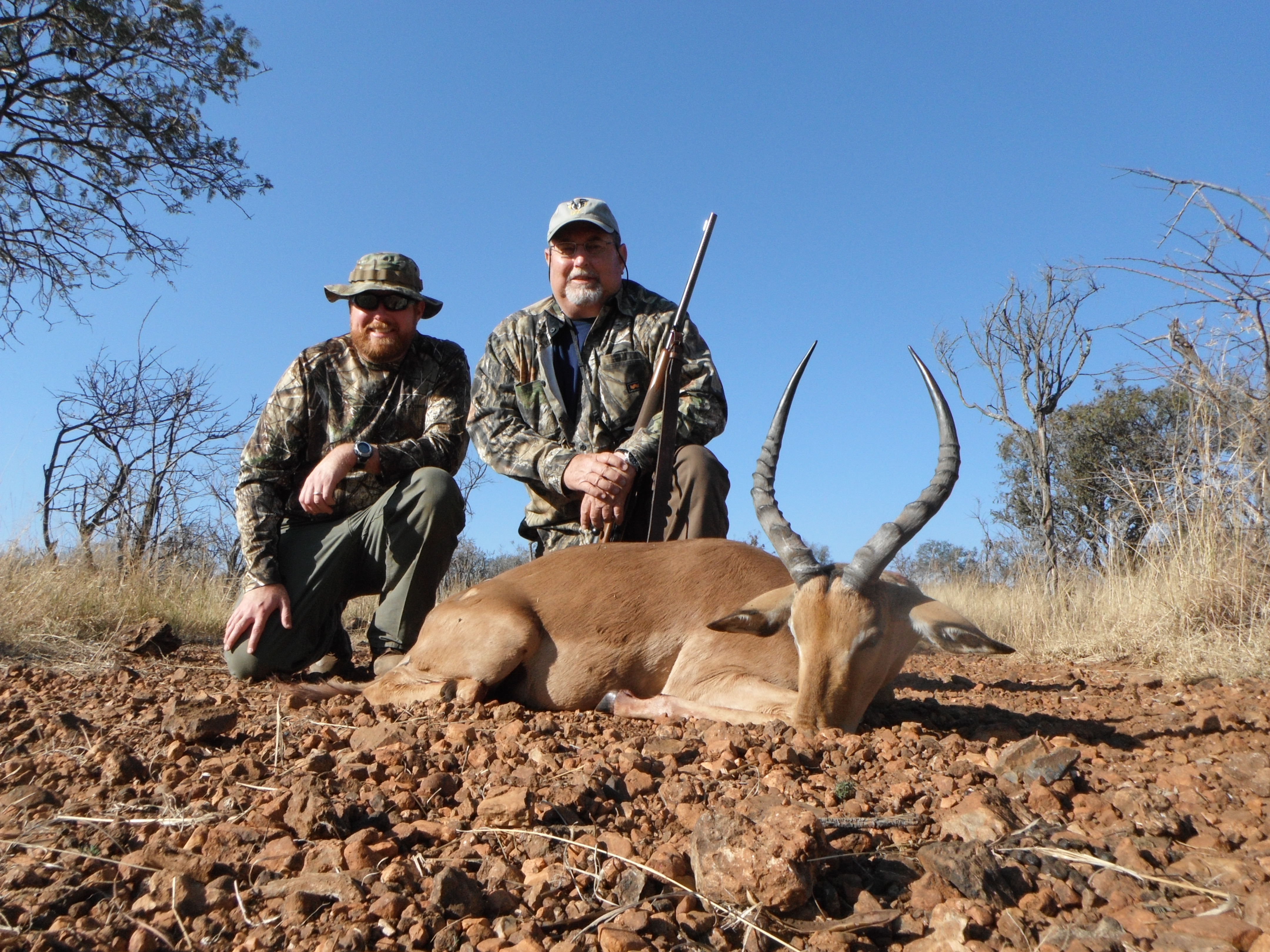 Now back to the black wildebeest! By the way we had not seen a warthog all day!

We had not bothered (chased the wildebeest) in about four hours now since before lunch. So first we had to find them. 100 or so large black animals on a clear open suvanna didn't take long to find, at least this time. Our strategy this time to get within range by moving a few yards at a time on the truck, then stop and wait. If there was even a single small tree between us and them we tried to keep it between us. Chris had set his rifle up on the bipod on the roof of the vehicle. His range finder said 357 yards. He said close enough. The PH picked a female cull on the edge of the herd and conveyed that to Chris. A little adjustment later....boom! It was obvious from this distance the animal was hit. She trotted/walked maybe 20-25 yards before falling dead. I have seen him hit paper and steel out to 600 yards on a regular basis. But this is the first animal to my knowledge he has taken at near 357 yards! 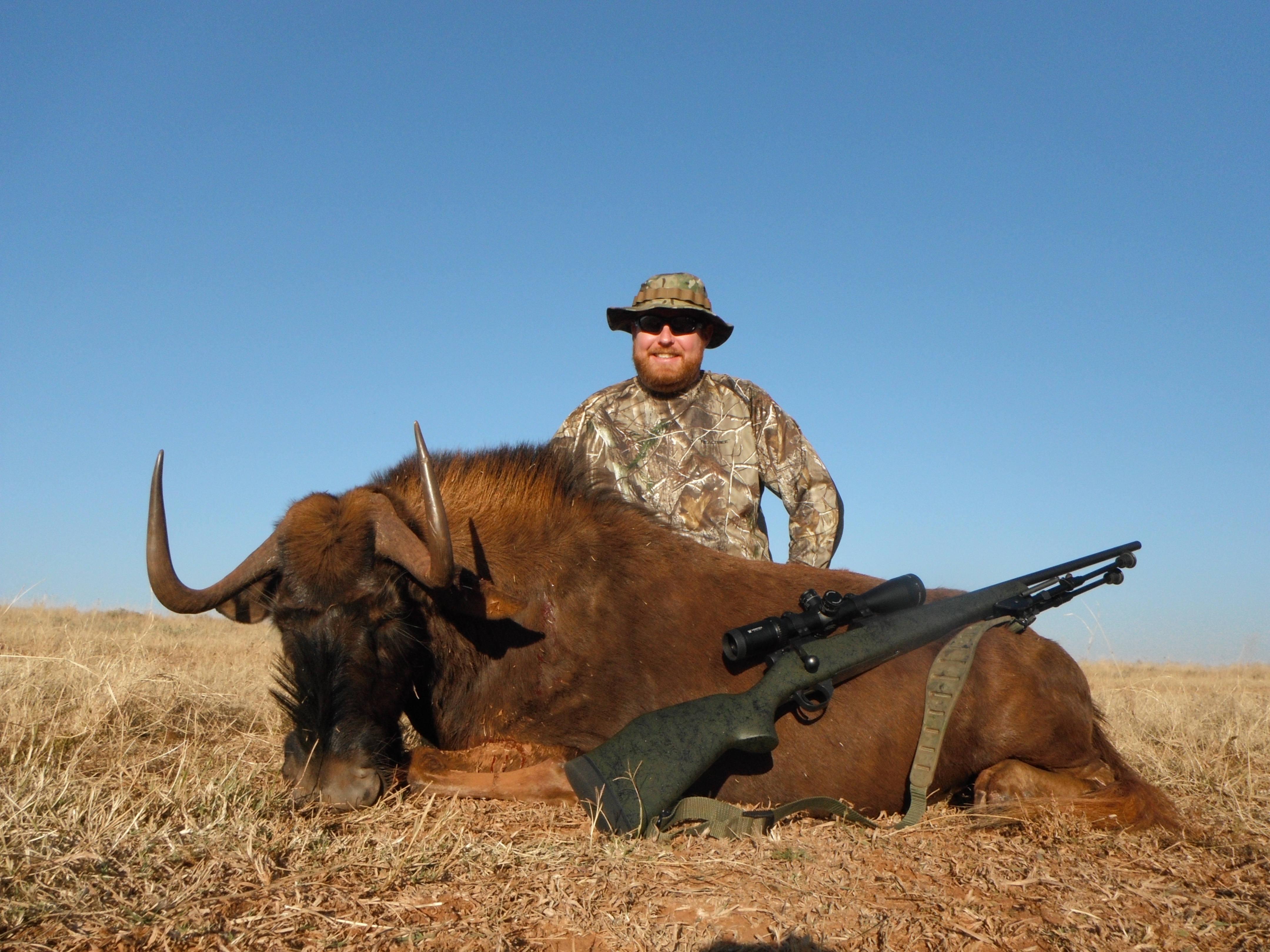 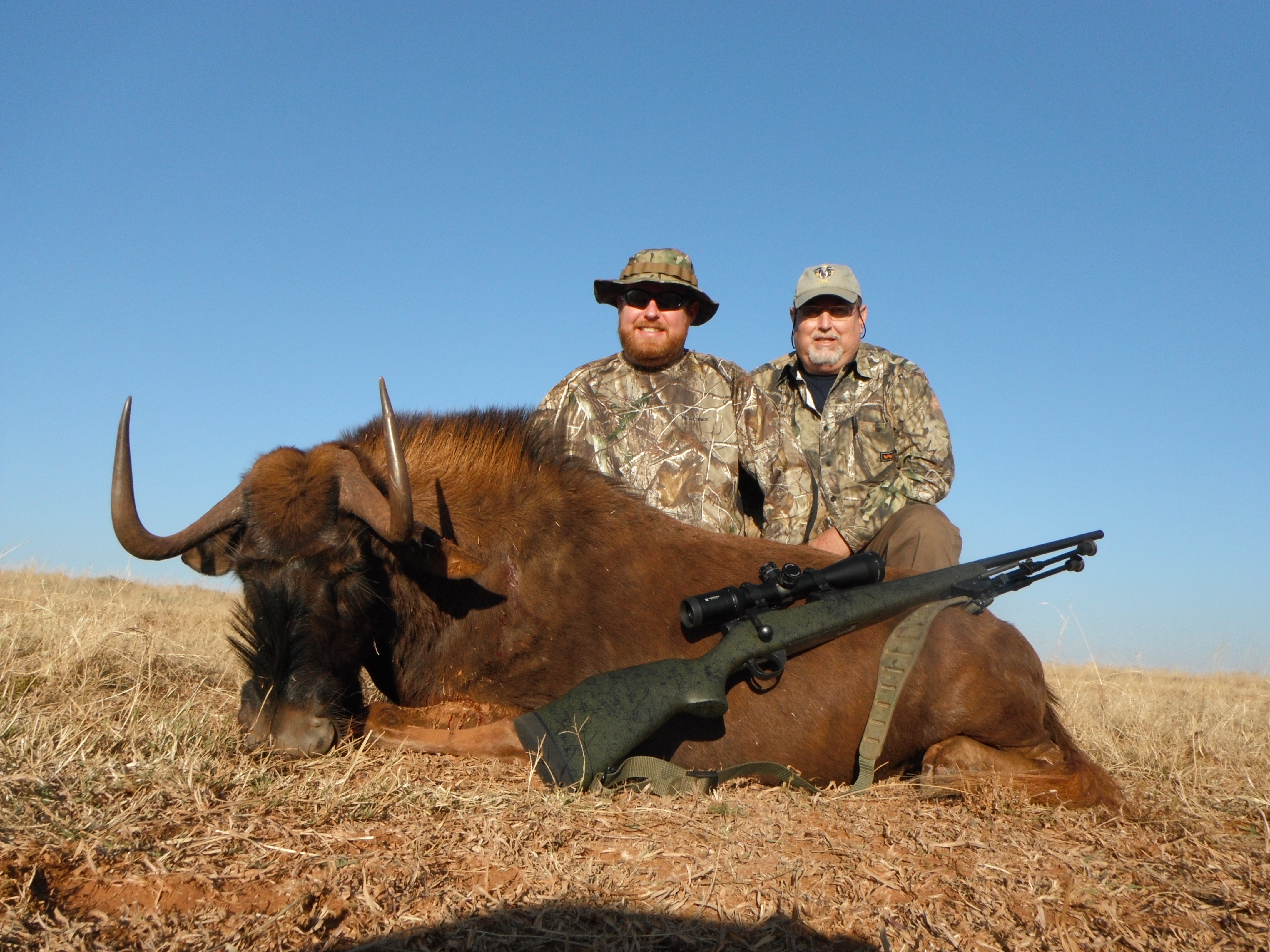 This really ends the formal hunt report. I will come up with a conclusion either later tonight or in the morning.

PHOENIX PHIL said:
No intent on changing your mind, just wanted to know for my own memory banks.
Click to expand...

No offense taken. Since I have been shooting these bullets for so long, I had decided early on to stay with them. I contacted Pieter about last September or so asking him if this ammo was ok for the purpose I had intended, and he gave me the ok. My son is the one who can talk about bullets and anything else involving reloading. He has been doing so for 10-12 years. He reloads nearly all of his hunting ammo. And also reloads some big bore ammo for me just for trigger time on a range.

Glad chris got to do some long range shots like he wanted. He did great at the range and it showed on the hunt to.

Thanks for doing a report also.

Congrats, seems like you guys had a lot of fun !

It was easily the best hunt that he or I had ever been on plus we learned so much, but still have a long way to go.

Congrats to you and Chris both! I'm sorry you had to share camp with @BillC...

cagkt3 said:
Congrats to you and Chris both! I'm sorry you had to share camp with @BillC...
Click to expand...

Had to share the dinner table.....but slept in different camps!

It was pretty much not stop, especially for a first African hunt!

Sounds like you had a great time! Thanks for sharing.

Really enjoyed the story and glad you had a great trip! Cool you got to enjoy that moment with your son!

Glad you had a great trip SierraOne!
"Montana seems to be what a small boy would think Texas is like from hearing Texans" John Steinbeck

Glad you had a great trip @sierraone. Thanks for report! Pieter and crew are AWSOME to hunt with.
Life is not a journey to the grave with the intention of arriving safely in a well preserved body, but rather to skid in broadside, thoroughly used up, totally worn out, and loudly proclaiming, “Wow what a ride!“

Congrats on the success, that is one pretty blue wildebeest!

wow tough crowd but I know your all just wishing you could wear a pink shirt and look so good doing it. LOL
You must log in or register to reply here.

EyeSight Max Reviews: How Does It Work?