I was fortunate enough to be able to book a hunt with Wik and Colin Coetzee at
@Game 4 Africa Safaris in the Eastern Cape. I traveled out in September from Honolulu, HI (long trip and not enough reading material). South African Airways was great regarding weapons check-in and ensuring it got to my final destination at Port Elizabeth, South Africa. Mr. X and his team from Afton Safaris met me at the gate and walked me through the weapons check-in at Johannesburg Intl Airport - these folks were highly recommended by Wik and the team, and since this was my first safari, it was a minimal amount of money well spent. I contacted Afton approximately 3 months prior to my hunt and they walked me through all the paperwork required to make the entry process smooth. Entry was a breeze with everyone in the know regarding what I was bringing, where I was going and how long I was staying.

I arrived in Port Elizabeth, SA on 2 September for my 7 day hunt and Wik met me at the baggage claim. Be advised your bags come out on the baggage claim belt, but you have to exit baggage and go to SA Police to claim your rifle. We loaded my gear and took the 2 hour drive out to the lodge. The drive went quickly with many animals to be seen and a great variation in the landscape as we went form coastal hill country to the interior of the Eastern Cape. As soon as we arrived, I was shown to my chalet...yes, no shared rooms or common living arrangements. The room was outstanding with all amenities and an plenty of storage for my gear. Additionally, the bed was not some cut rate provision, but rather an adequately large and very comfortable (at least by my standards) bed. This is really important as Wik and the team will allow you to hunt as hard or easy as you want, and after hunting hard each day, a good rack is important so I can hit the next day hard, starting at 0430 or so. One other hunter was in camp, so after introductions and settling in we sighted in our rifles, ate a great dinner and turned in for the night. The meals were exceptional, a combination of wild game and domestic. Brittany ensured all meals were top notch...I have never eaten so well or enjoyed the dinner as much as with this crew. The lodge itself is spacious with all the amenities you would expect from a top notch B&B - coffee and snacks always available, WiFi, TV, and a well stocked bar. Outside is another fine dining area and a fire pit / social circle for the end of the day.

Each hunting day was a unique experience. I was eager to hunt hard (at least what I considered hard) throughout the entire safari, so early launches were on the agenda for most days. The Eastern Cape is no pushover if you really want to hunt hard - there are a lot of hills and climbing up and down ridges is the norm if you are chasing trophy Kudu. As stated earlier, Wik and the entire crew will allow you to hunt as hard or easy as you want, and this is what I think makes Game4Africa a great experience. You get to hunt and enjoy yourself on your terms, after all it is supposed to be a vacation. If you want to hunt hard (8-10 hours per day hiking up and down ridges), you can easily get ready using one of the many hunting fitness programs. I used Elk Fitness from Mountain Ops, and started 3 months prior to my hunt. It was very easy to continue once the first week was in my rear view mirror. Hunting Kudu is very close to hunting Elk in the physical exertion and experience. Our hunting areas consisted of multiple conservancies and concessions in various proximity to the lodge. These hunting areas were huge, some being the size of counties back in the states. I think one was at least as large as the island of Oahu where I live. Each day was unique with a new area being hunted, followed by an evening of exceptional dinner and some socialization as we swapped stories around the campfire. You cannot ask for a better and more relaxing experience following a day of hunting.

Now for the game. Wik, Colin and all the PH's at Game4Africa are very particular about getting you on a good animal, no matter what it is - Kudu, Wildebeest, Impala, Blesbok or Zebra. Wik was my guide (hunted 1 on 1) and his knowledge, can-do attitude and sense of humor made this hunt a huge success in my opinion. The hunt I booked was an incredible bargain in my opinion, with outstanding Kudu, Black Wildebeest, Impala, Zebra and Blesbok - I took an additional Kudu and a Blue Wildebeest during the hunt and the trophy fees for these were very reasonable. There are really big trophies in the hunting areas that Wik and his team use. The game I took was good, but we saw and even had opportunities at even bigger trophies in almost all cases. Kudu especially are prolific with some very impressive (and smart) bulls running around out there. I was slightly concerned about hunting so late in the season, but that proved to be unfounded. We must have sen at least 150 Kudu bulls during the safari and I had opportunities on at least 10 or more. The other game animals were also exceptional with each hunt being a different stalk through various terrain types - the variety of hunts and conditions was something that I really found to be appealing and left some lasting memories. In the end, I was fortunate enough to get all animals with a day and change to spare. Wik filled in the down time with some roving photography ventures on the ranch and a little fishing.

No hunt report can be complete without mentioning the staff - the trackers, skinners, cooks and housekeeping staff. Elliott and the tracker / skinner crew were AMAZING! These guys do not give up or do anything half-way. My second Kudu took all day to get. It was a very hot day (90 deg. F), and Wik asked the Trackers if they were up to one more move through a set of canyons and a finger ridge that looked very promising. They said they had not come all this way and hunted so hard to quit. Despite working all day scouting and tracking in miserably hot conditions, these gentlemen really wanted me to get that second Kudu and pushed hard one last time. It paid off with an exceptional last ditch effort and a great Kudu in the salt. The whole crew was top notch and I was honored to have hunted with them. The PH's and the entire team live up to their motto - "Born to Hunt."

In conclusion, this was an incredible and memorable hunt! Showing my friends back home the pictures and talking about the hunt has convinced them that we are going out next time as a group. To Wik, Colin and the whole team at Game4Africa, you have my heartfelt thanks for an incredible experience...I am still smiling when I think about it. I hope to see you in the future for another outstanding safari! 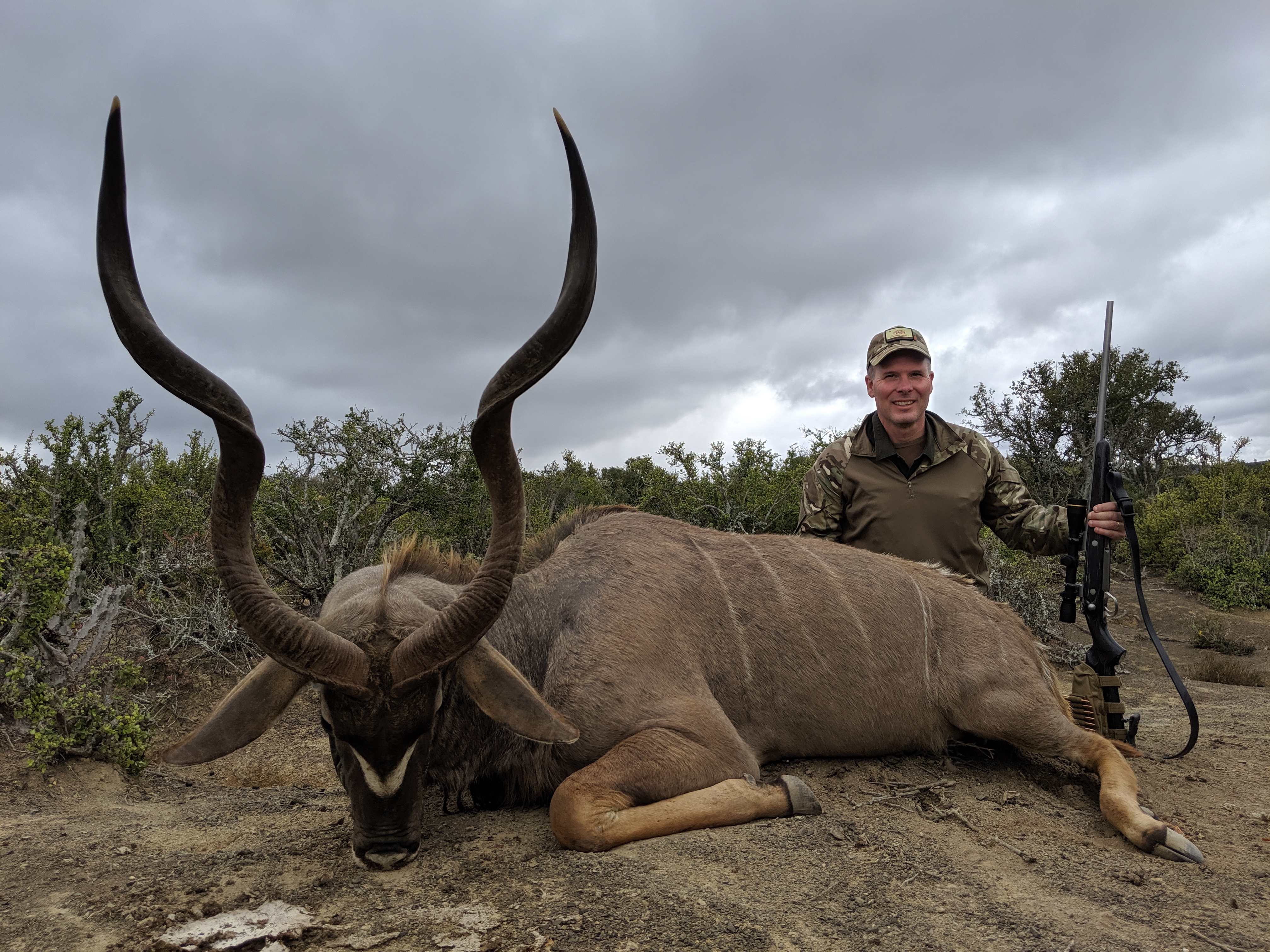 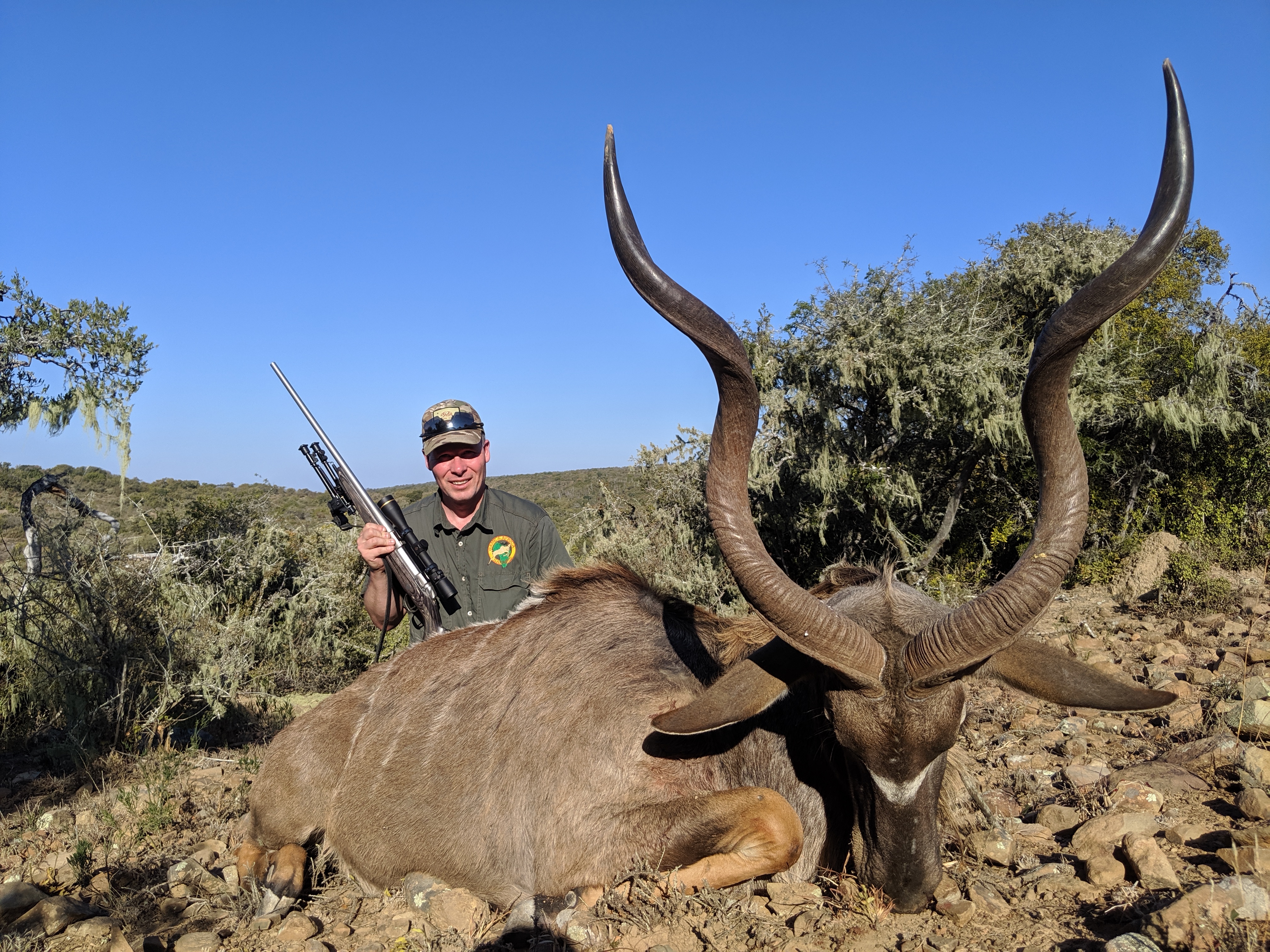 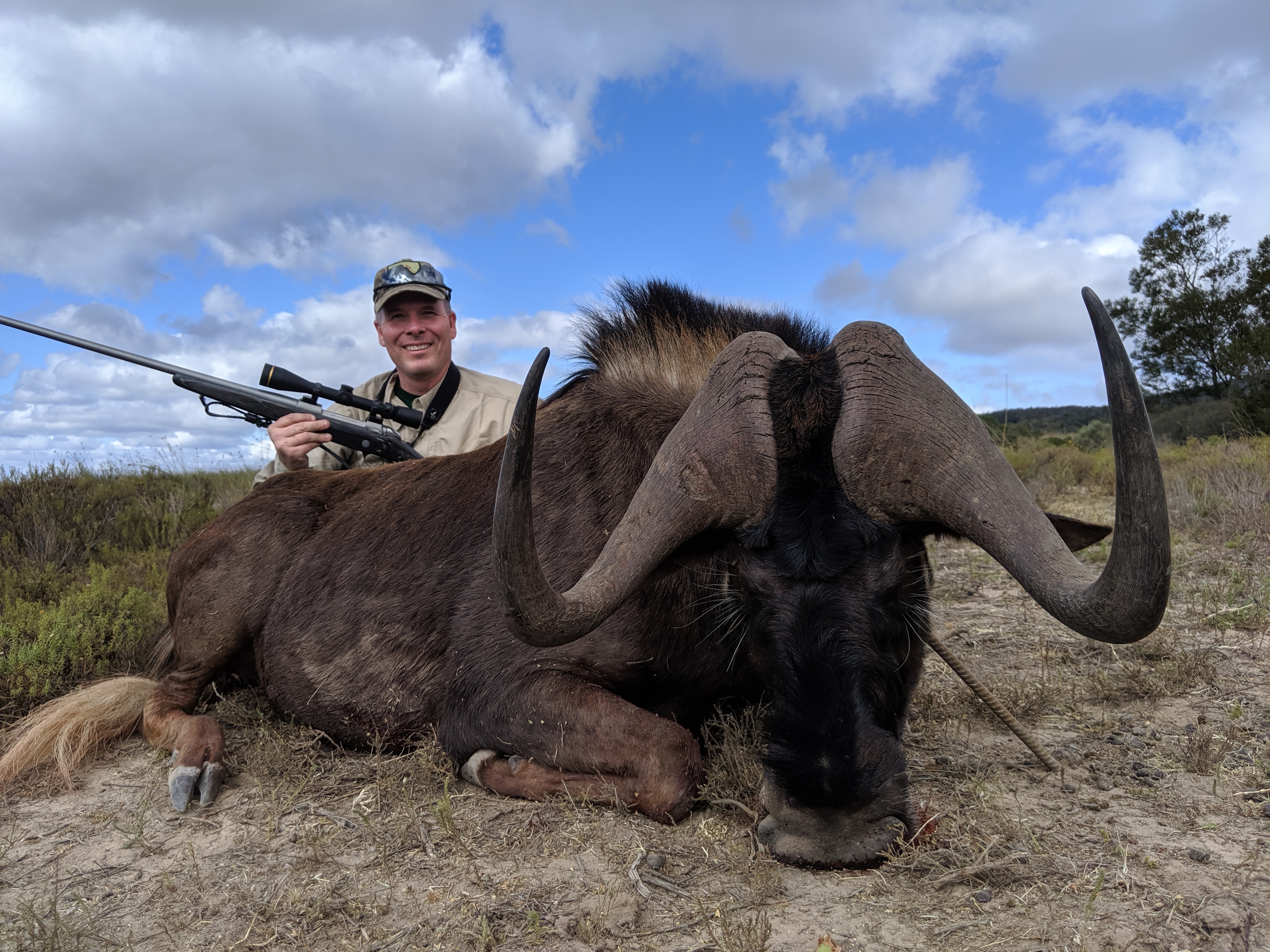 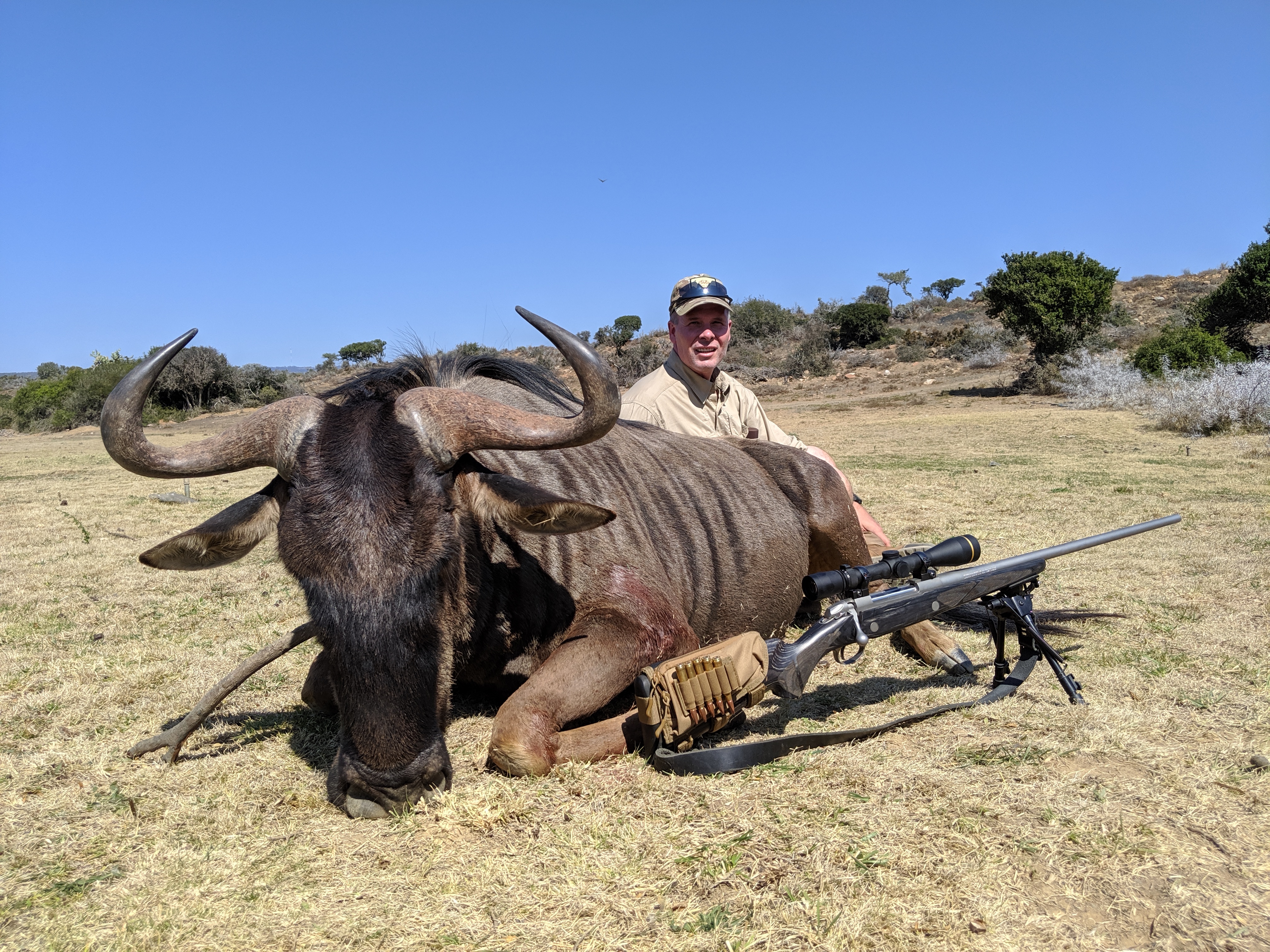 Congratulations on a great hunt! Which rifle and ammunition did you use? How long were typical shots? Thanks again for your report.

Oh yes! Some fine trophies! The Eastern Cape sounds like an excellent experience! Thanks for sharing!
Africa on my mind.

Sounds like you had an excellent hunt. Congrats. Nice looking trophies.
Bruce

gesch said:
Congratulations on a great hunt! Which rifle and ammunition did you use? How long were typical shots? Thanks again for your report.
Click to expand...

Congrats for a great hunt and very good trophies !

Well done, thanks for the report. Sounds like you had a great time.

Congrats on a fine hunt and looks like Wik and the crew has done another great job!
It'not the years, it's the mileage......(Indiana Jones)

Sounds great. Nice Trophies. Im counting down as i have booked my first paid hunt and overseas trip with the same team after a recommendation from an Aussie.
Chris “Australia"
Dreaming of Africa, Hunted Africa, 2020
The website made me do it!

CBH Australia said:
Sounds great. Nice Trophies. Im counting down as i have booked my first paid hunt and overseas trip with the same team after a recommendation from an Aussie.
Click to expand...

Thanks for the report, Some great trophies and memories!
Bowhunter addict

Glad you had a great trip-am very jealous. Those guys had a busy September!

@Tidalgunner , thank you for the excellent report and great photos from your hunt with @Game 4 Africa Safaris. Looks like Wik and Colin made a new friend and have another happy client. I hunted with Wik in late May a few years ago, during the Kudu rut, and saw lots of Kudu. Your hunt, in early September, was a much harder hunt and you still were able to take two beautiful Kudu.

Glad your hunt was fun and successful.
We met at JFK airport during rifle inspection on our way to Africa.

I've been talking to WIK about his Spiral Horn package.
Sounds like from your report it would be a great hunt.
Regards,
Kelly G.

Very nice animals taken, well done to all!
You must log in or register to reply here.