We met Doug and Dawn last year and since then we have been planning a 2018 hunt. Doug’s two sons, JD and Job (pronounced Jobe), arrived a few days before and stayed with us to get some work experience in South Africa. We took JD and Job hunting early mornings and late afternoons to look for a Bushbuck each. On the first morning, we sat and watched the sun’s rays starting to lighten up a hill where Job and Lauren sat glassing for a male Bushbuck in a prime hunting area on the farm, while JD and Juan went for a walk to glass and spot other prime hunting areas. An hour later they spotted a beautiful ram sunning himself and they started their stalk. Once in position the Bushbuck still stood face on enjoying the warmth of the African sun after a bitterly cold night. After approximately 20mins he stepped out into a clearing and gave JD an opportunity. JD made a great shot with a 300 win mag at 120 yards. 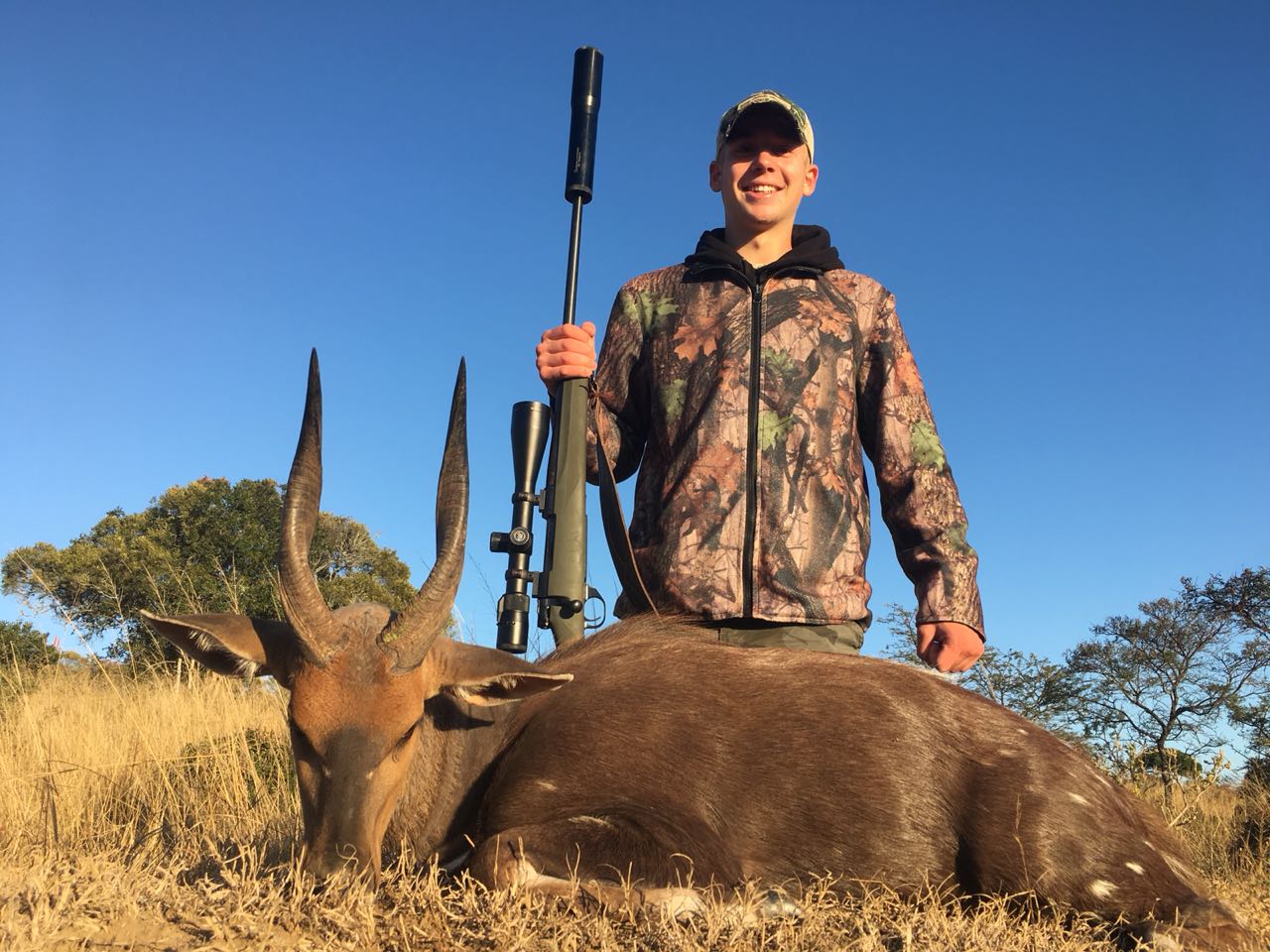 Job and Lauren had seen quite a lot at their spot but mainly female Bushbuck and Common Duiker. It was time to relocate. It was not 10mins and a sneaky big bodied Bushbuck ram walked quickly through an opening from one bush to another. Job got ready and patiently waited. The next minute the ram appeared below us on the opposite slope but he did not stop and kept walking. He came into perfect shooting range but as sneaky Bushbuck are, he gave us a few seconds before disappearing and no shot was taken.

In between hunting early mornings and late afternoons JD and Job assisted with building a viewing deck as well as watched some game capture that was happening.

Later that afternoon we went to hunt and hoping it was going to be Job’s turn but unfortunately no such luck. The last morning that we had to hunt and try get a Bushbuck was all that was left. Lauren and Job sat again glassing areas, Juan went for a walk to cover other areas and spot for Bushbuck. Almost 2 hours went by when Juan radioed and said “I see two rams”. Job and Lauren as quick as they could got to Juan, the one Bushbuck had disappeared and the second one was slowly making his way towards the thicket. Job got on the sticks and was ready to shoot the minute the Bushbuck gave us a good shot. Juan shouted, the Bushbuck stopped and Job made a great shot. The Bushbuck was down and we were all thrilled that our luck and time had paid off. This was Job’s first African Animal. 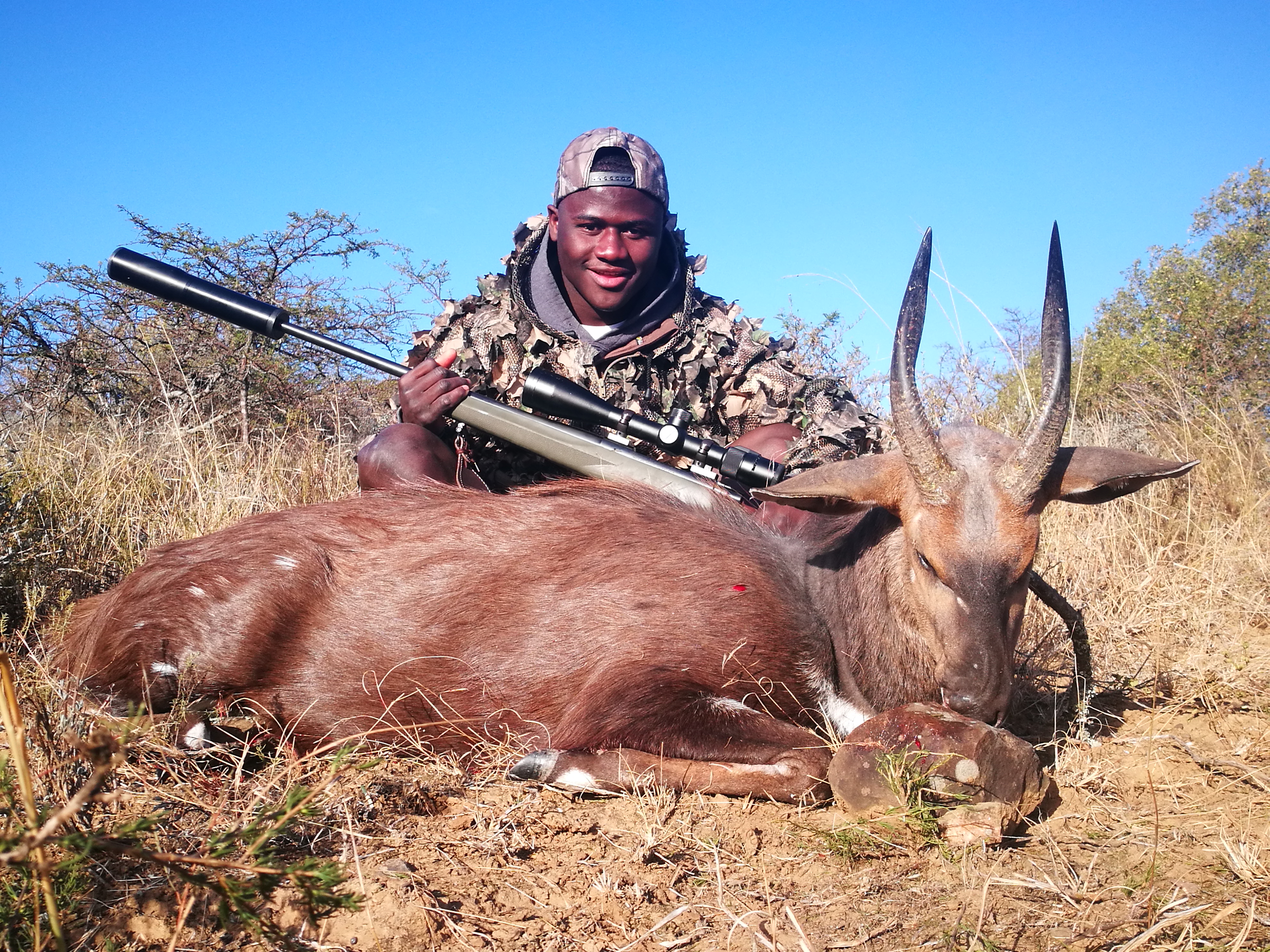 Dawn and the rest of the family were renting a house just outside the local town, Kenton on Sea. The ladies enjoyed spa treatments, walks on the beautiful beaches and some shopping. Doug arrived a few days after everyone. We moved to our Coastal Concession Hunting Camp and on the cards to look for were Bushbuck, Warthog, Impala, Blesbuck, to name a few.

Jason, Doug’s son in law, was first up and a Bushbuck was spotted far off in the distance. The stalk started and with much luck the Bushbuck was not far from the spot where he was first seen. Jason made a great shot and this became his first African animal to hunt. 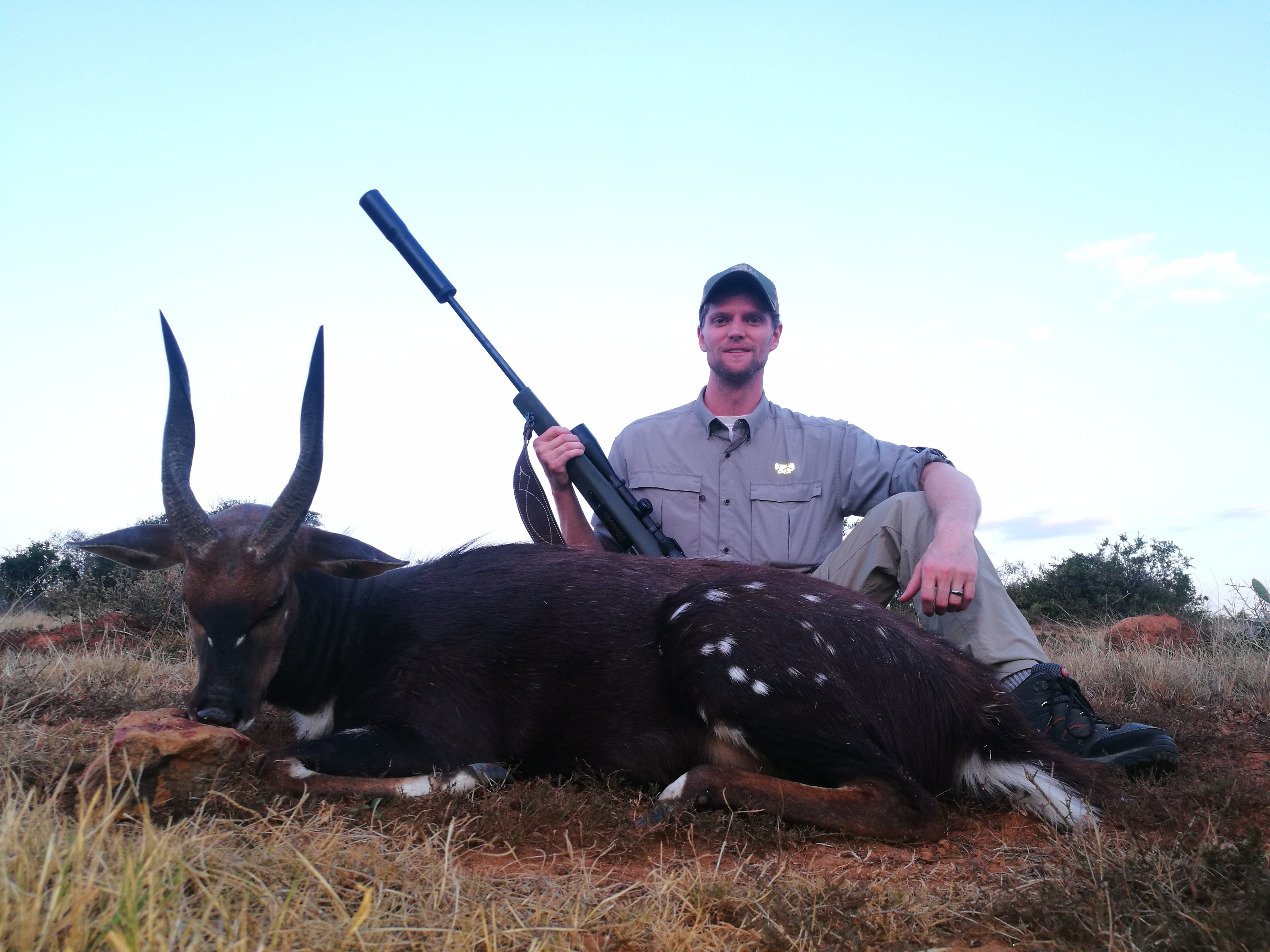 The next morning Godwin, Doug’s youngest son, made a great shot on a Blesbuck at approximately 100 yards. This too was his first African Animal. It is always such a wonderful feeling when you get to experience someone shooting their first African animal. 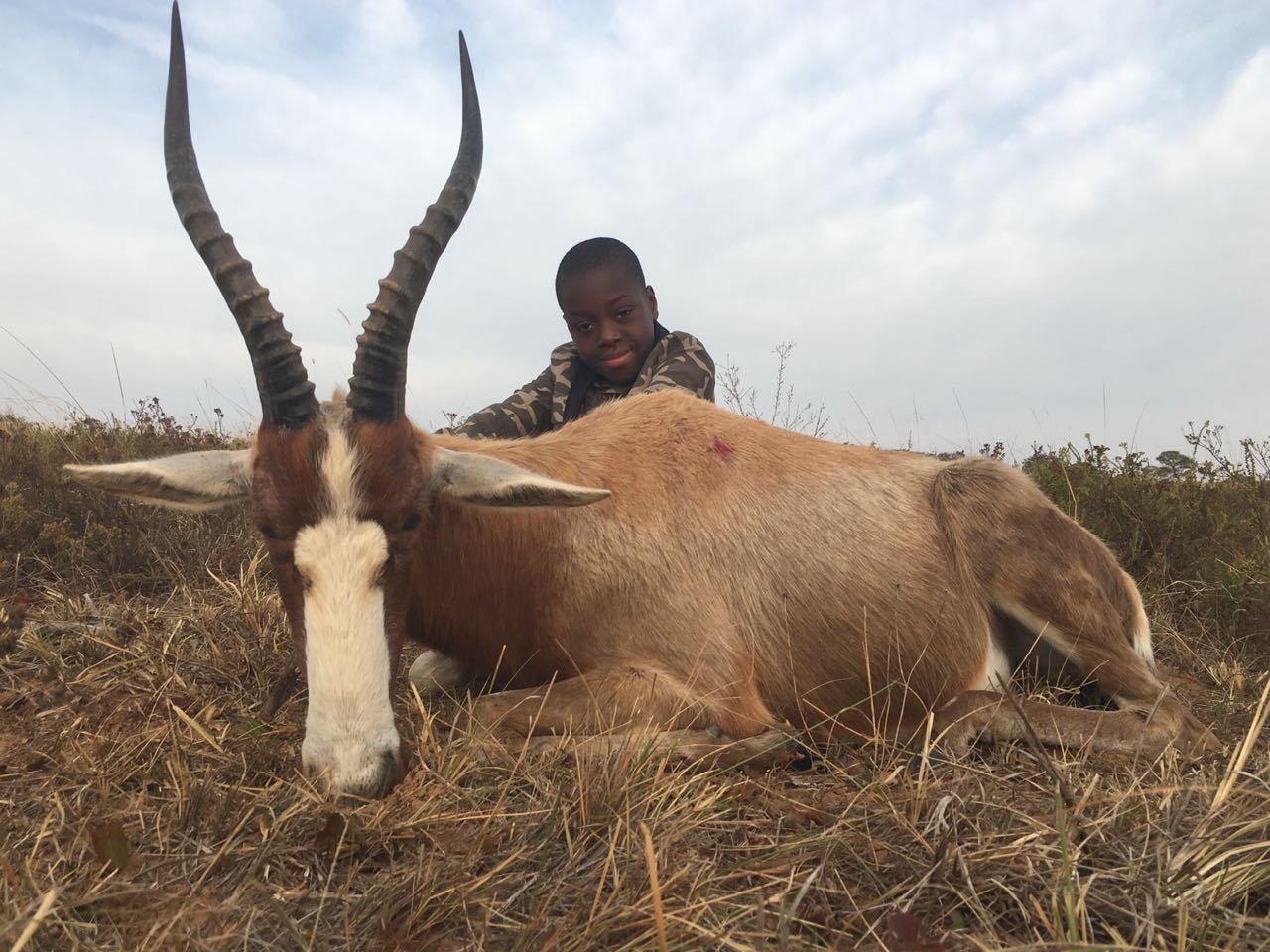 The elusive Sable that we don’t often see was spotted while Lauren and the kids were out hunting for Warthog. Juan was radioed and Doug wanted to have a look as he was a little interested in a Sable. They walked and stalked closer to the Sable as we had spotted him far off in the distance. Once we got closer, Doug made his decision and the final stalk was on. The Sable was a very wary and got ‘spooked’, he ran a short distance and stopped, giving Doug a few seconds to place his shot. The big beautiful Sable was down. All of Doug’s children stalked with him and were present on this hunt for a magnificence animal. That made it extra special. 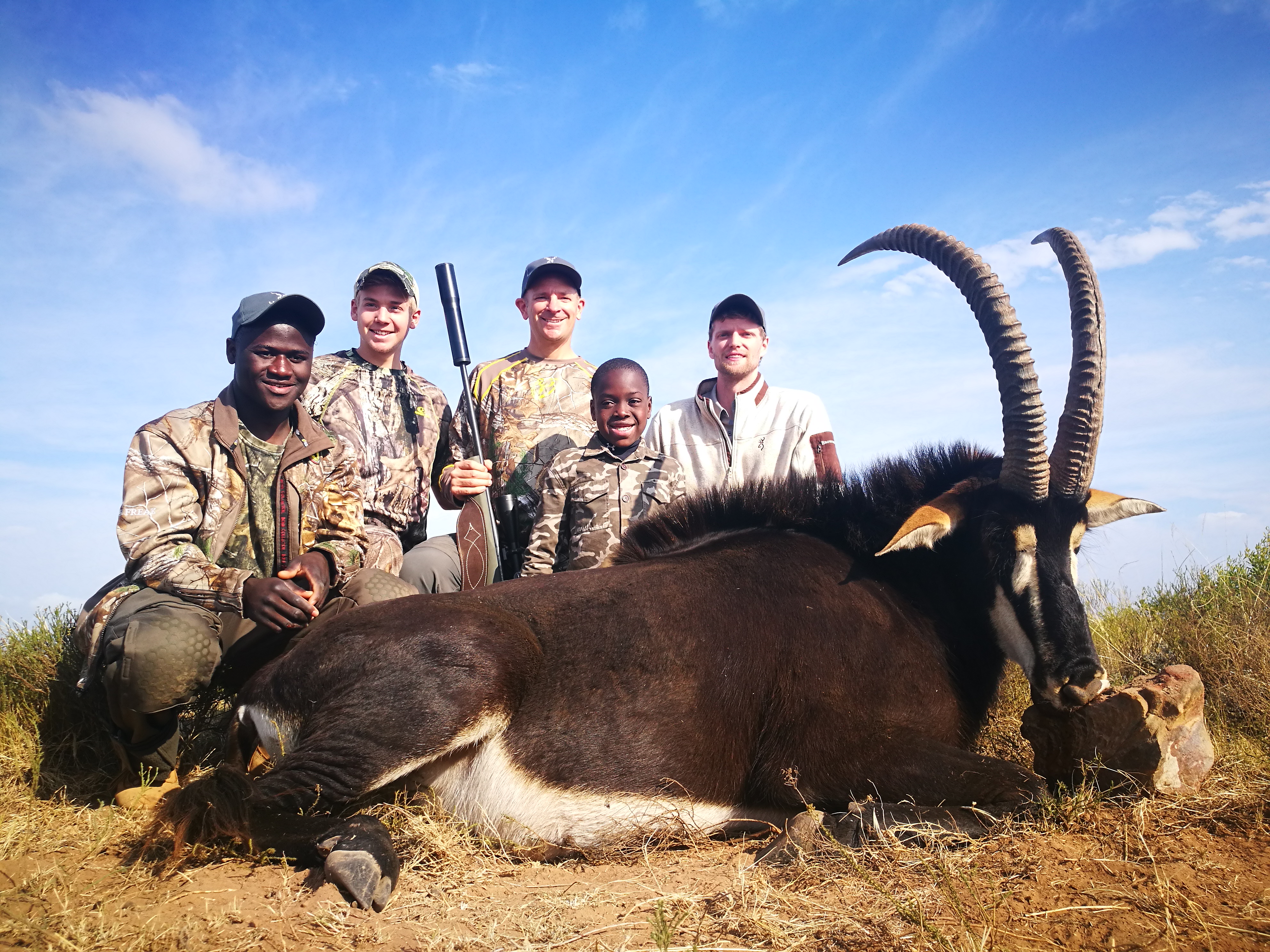 Jason shot a beautiful Impala and Job shot a cull Warthog. After only 3 days of hunting we got to shoot some beautiful trophies that were thoroughly enjoyed by all. 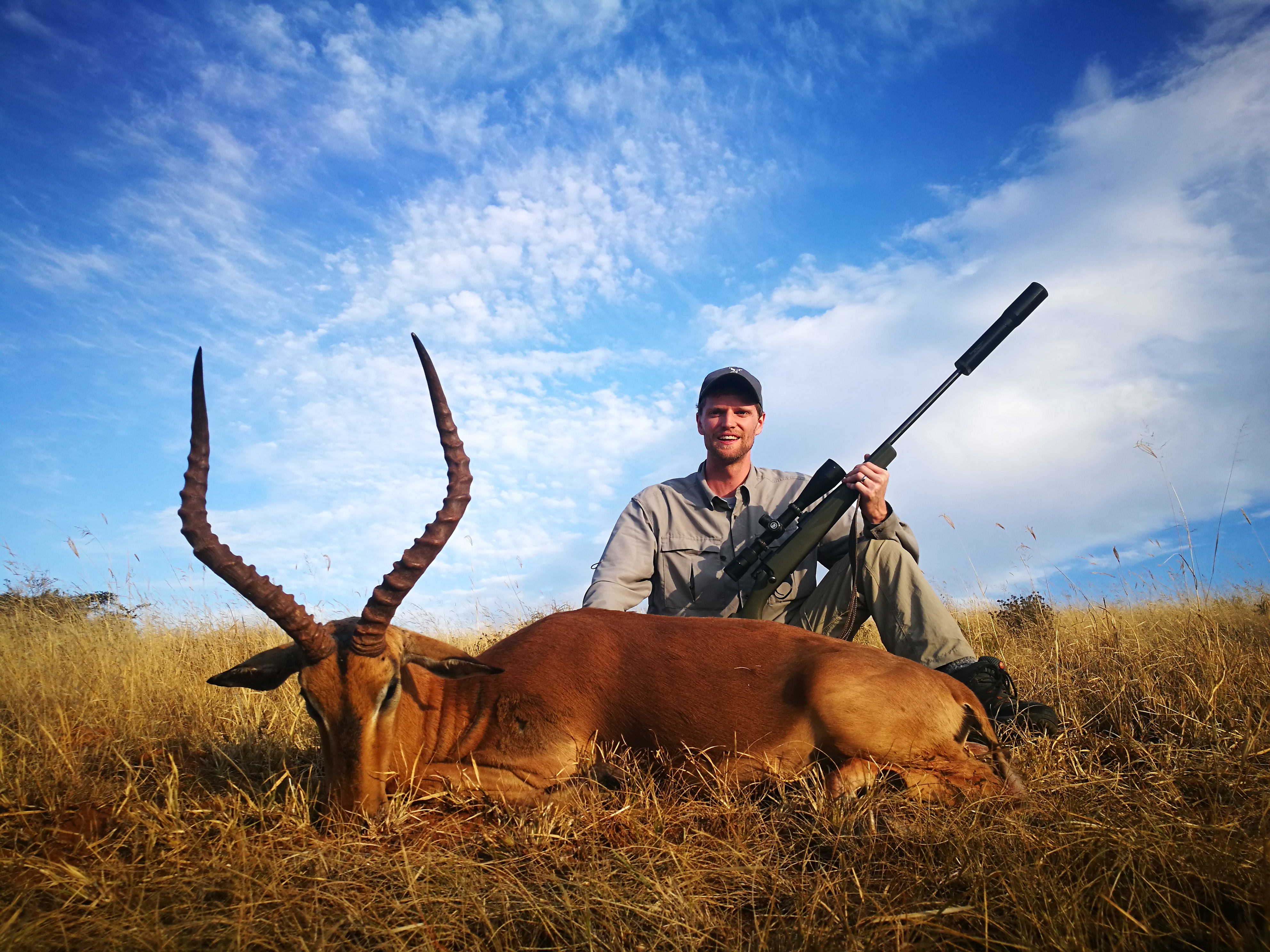 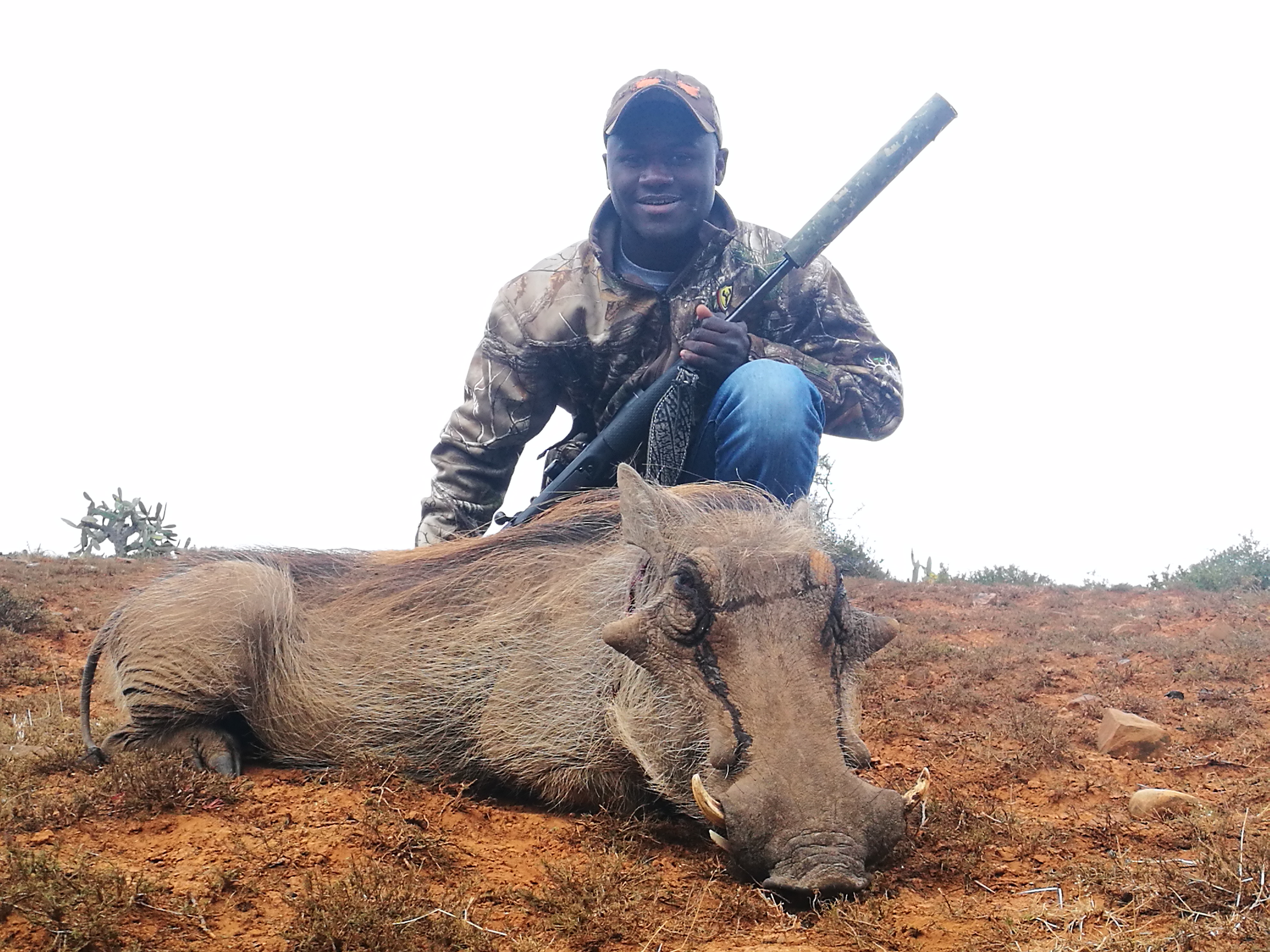 Looking forward to hunting with you all again soon! 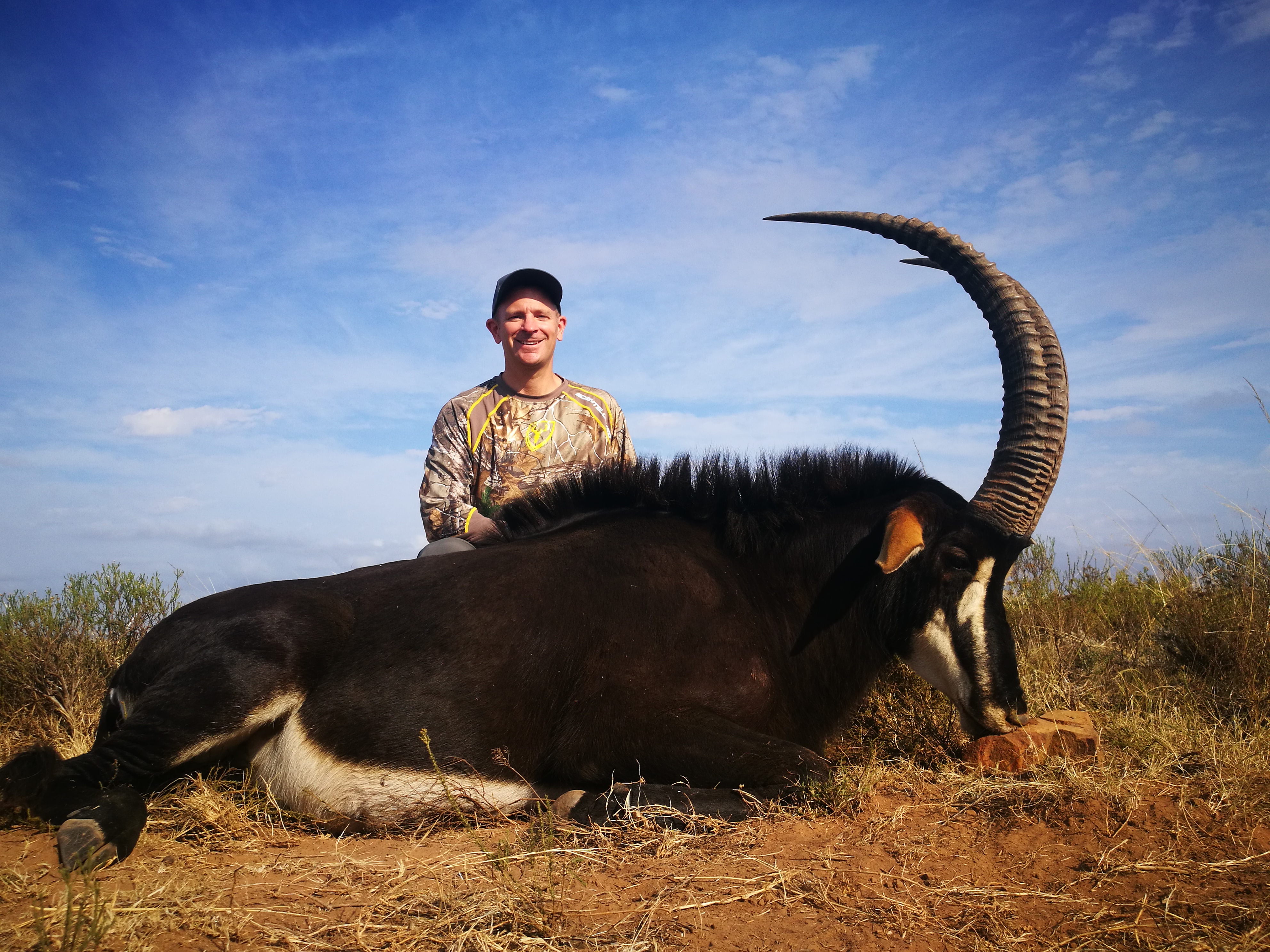