Back from RSA and finally have the time to get in front of the computer and thought i would post up our hunt report:

At long last we were finally on our way back to South Africa to hunt with Marius at KMG for our fourth hunt. This time it would be all about dangerous game, namely Hyena and Cape Buffalo. We arrived in Johannnesburg after flying in from Munich and quickly settled in at African Sky Guesthouse and got a few hours of excellent and long overdue sleep. Woke up late afternoon and then had a delicious meal while waiting for Marius and Kim to arrive. A couple of Gin and dry lemons later around the boma and we were off to bed in anticipation of the drive to Hoedspruit. The drive to Hoedspruit was very nice and the scenery while passing through the Drakensberg mountains was spectacular. We settled in upon arrival at Hoedspruit around the fire and of course the chat was all about Hyena and Cape Buffalo as we waited to commence hunting in the morning.

Up early for the first day of hunting at 0530 and a quick stop at the range to check the .375 H&H. Confirmation at 50 and 100 yards and we were good to go. First stop was the hyena bait and unfortunately it was not hit. We scouted the area and found no tracks (very unusual and more about that later), however leopard tracks were very abundant! 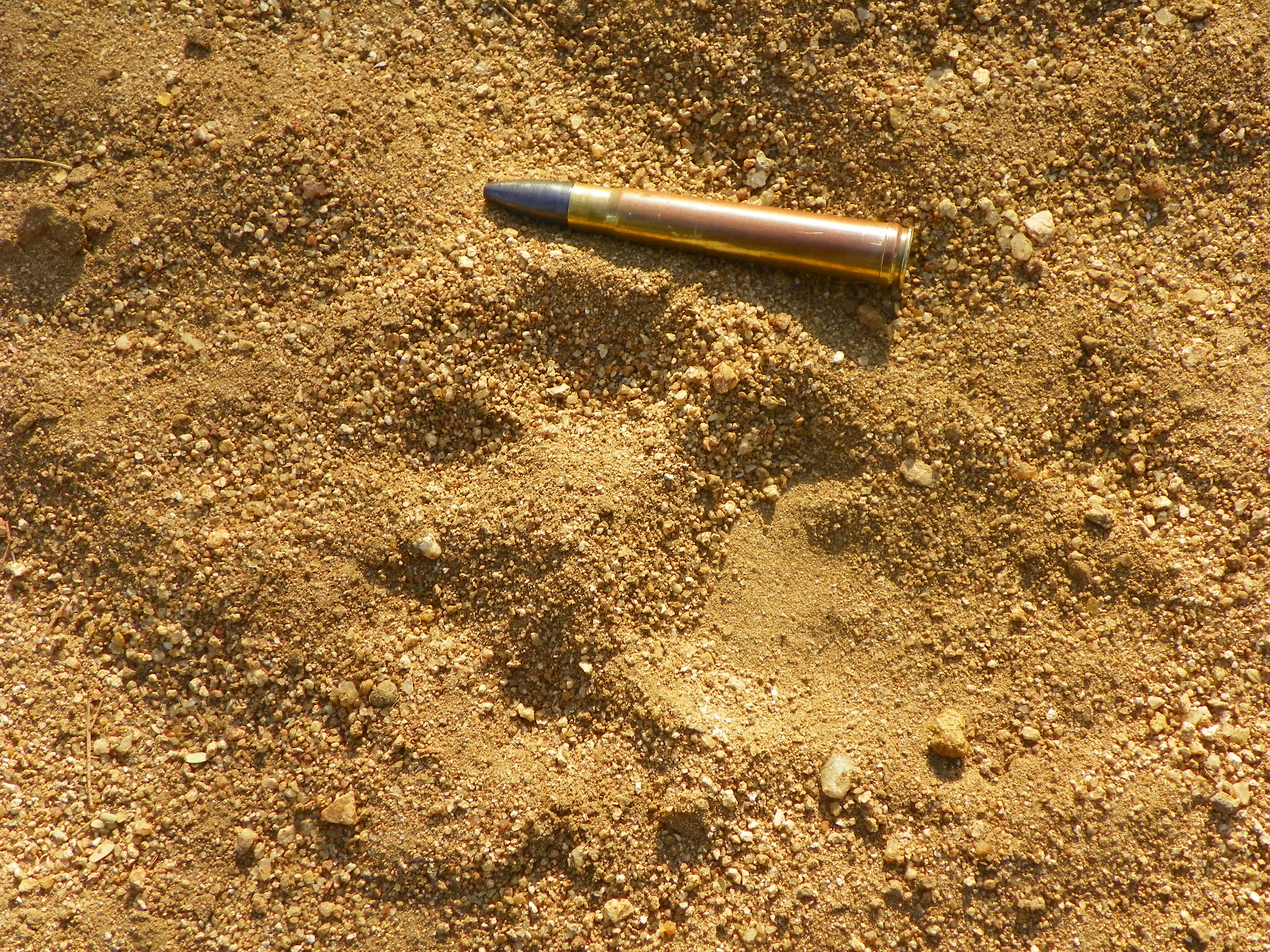 We started to check for buff spoor and saw some excellent bushbuck and for anybody that knows me it took all my restraint to stay focused and let the bushbuck proceed on their way! We crossed the spoor in the road and got on the trail for about an hour (man can these guys track) we began to close on the herd when the winds swirled and the jig was up. We got back onto the spoor after lunch and letting the herd settle down. 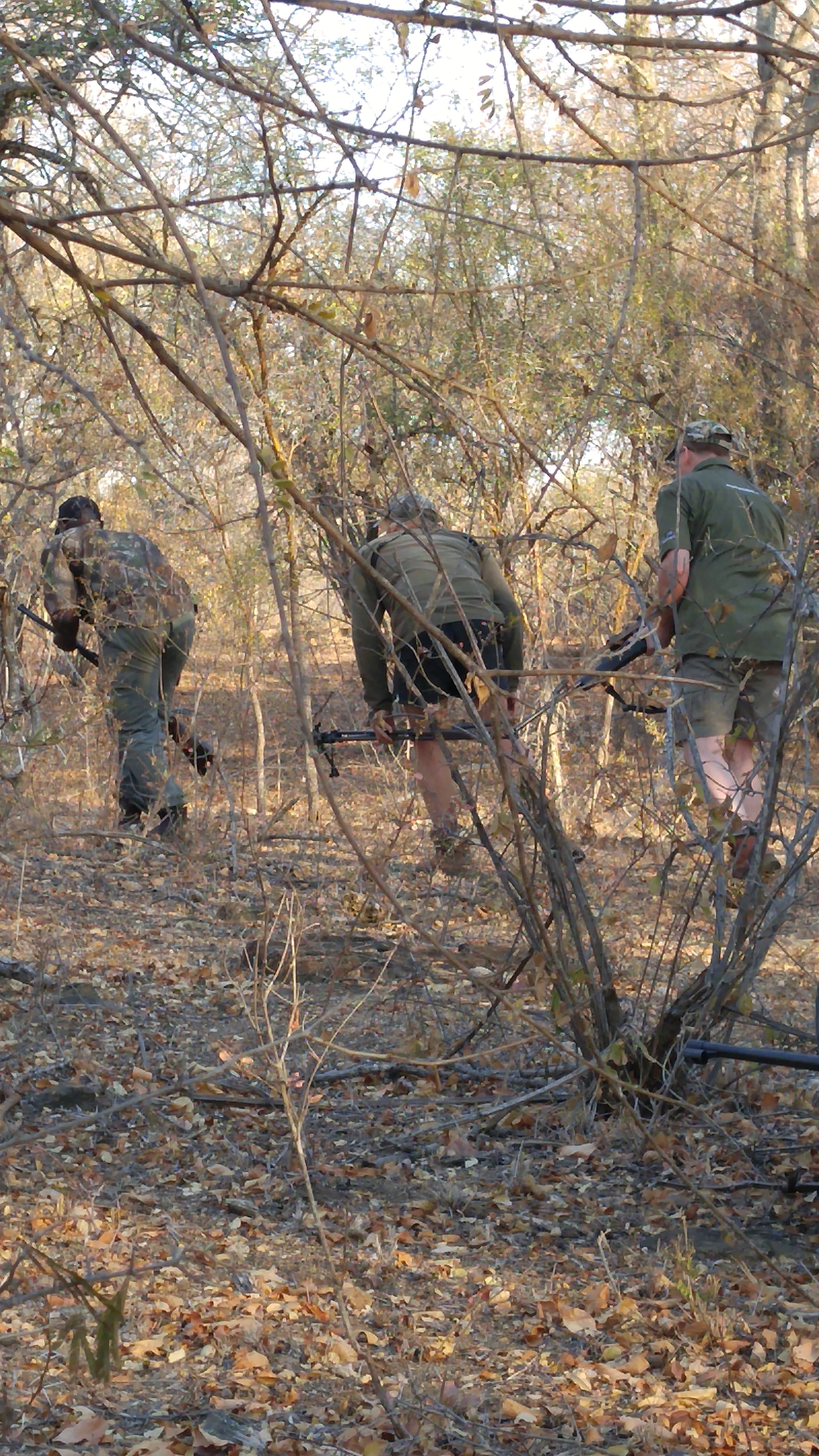 We closed in on our hands and knees and crept into shooting distance. We settled in glassing intently for the right bull while a herd of impalas practically ran over us. The herd ram stared at us for an eternity before slowly walking off. The sun was beginning to wane and we knew then that it was unlikely we would be able to get a shot off as the herd was content to stay in the thick stuff. A leopard sawed not far off and as the sun set we slowly backed out determined to come back tomorrow. We quickly completed a drag in hopes of drawing a Hyena into the bait and finished the day with a dry lemon and gin

Glad there was plenty of Gin.

Sounds good so far. Looking forward to hearing how the hunt progresses!

Nice, thanks for sharing! Look forward to the next installment
John 3:16

Hope to make this same hunt with Marius in a few years, look forward to seeing the rest of the report.
Y'all can go to hell, I'm going to Texas! Davy Crockett

Good luck and enjoy the bush! Look forward to hearing more!
"A man and a gun and a star and a beast are still ponderable in a world of imponderables." Robert C Ruark

Been waiting for this one!!!!

Sorry it didn't work out to meet you and Marius.... I'd hoped it would.

Yeah... Leopard population problems.... Not where I was at either!
HUNTERS make importation bans work!

What?? Back home and that's all we get less gin and more typing my friend!
"When my friends tell me that I have led a remarkable life, I have to admit having done my best to make it so" - John Kingsley-Heath

Well its a start. I know the typing takes time. Good tale so far. Keep it up. You do know that sleep is overrated right? Looking forward to the rest of the story... Bruce

Great start, I hope you got a hyena!

Sorry it didn't work out to meet you and Marius.... I'd hoped it would.
Click to expand...

I am sure we will cross paths again, looking forward to it.

We decided to take a day off hunting and head for Kruger. If you have never visited Kruger National Park, you must take the time to see it, it is unbelievable! We hadn’t even made it in to the main gate when we came across some elephants just off the road! We saw lots of game including impala, kudu, crocodiles, hippo, elephant, lion to name but a few. We also saw leopard, hyena and grysbok, all difficult animals to view. We saw 4 of the big five and six of the dangerous seven in their natural habitats. The park was incredibly dry and it was obvious that the second year in a row drought was taking its toll, as it would shortly on us (but more on that later). The park warrants a full day so get there early and leave a day on your safari to visit this truly spectacular place. I'd go back in a heartbeat! 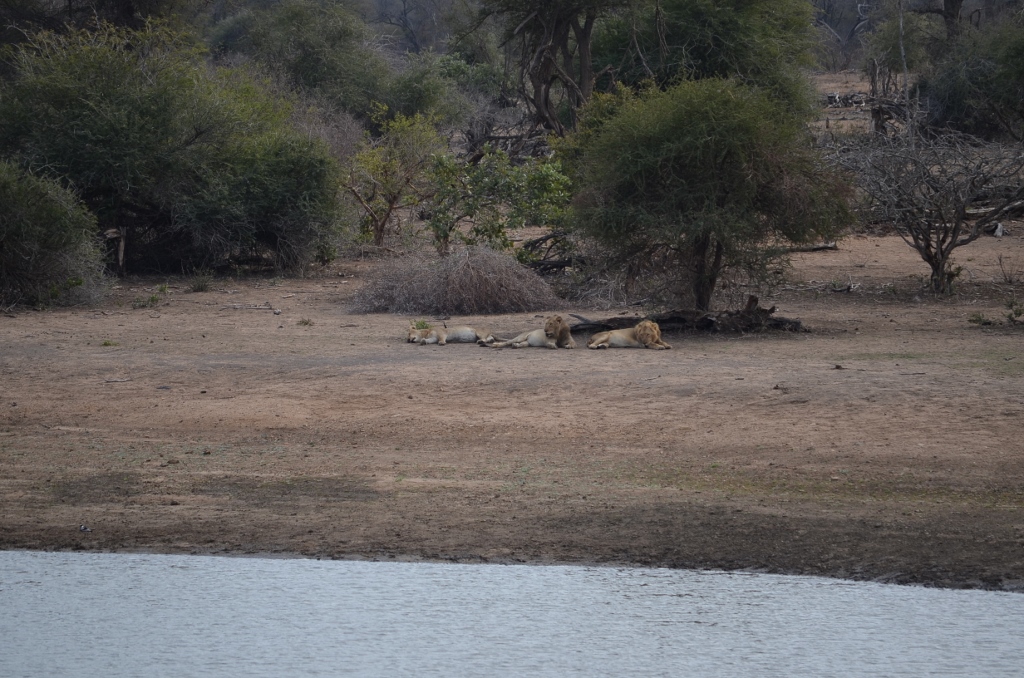 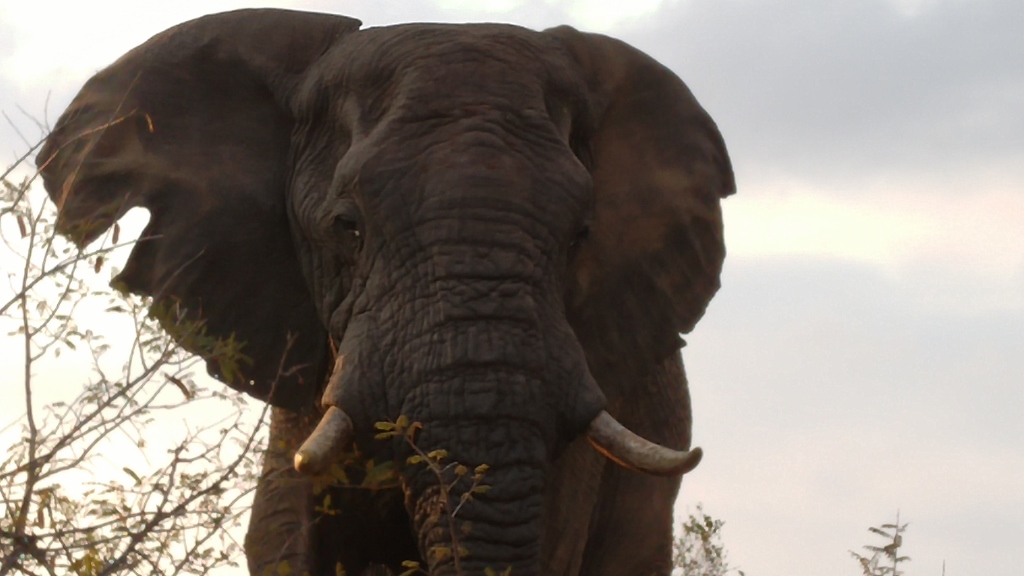 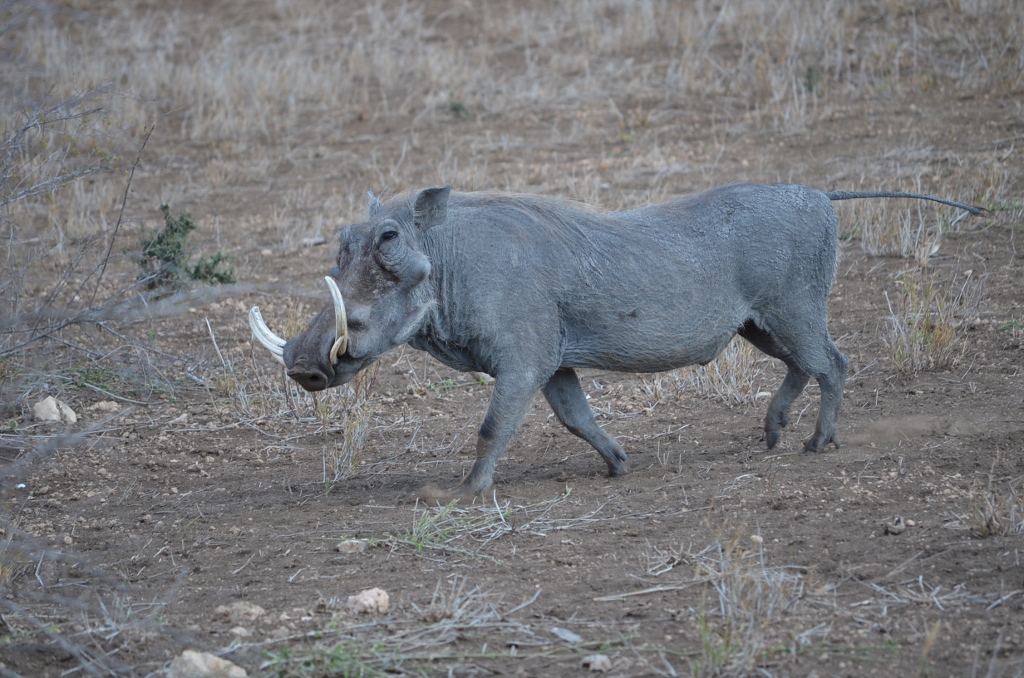 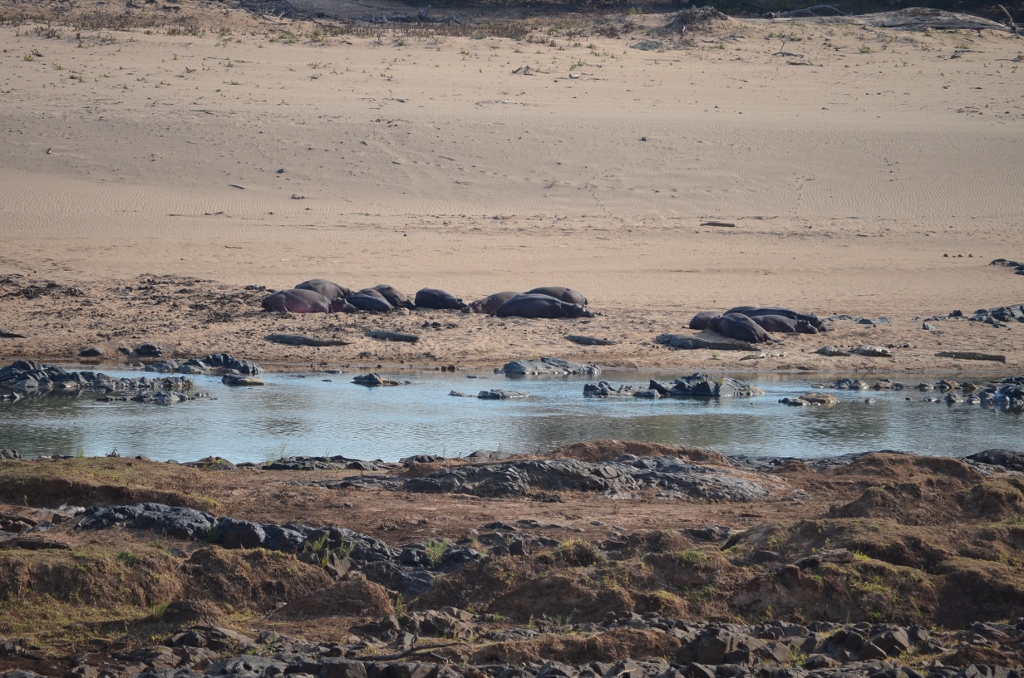 Really enjoying all of your photos in your report! Great shots of the hunt and the park.
"When my friends tell me that I have led a remarkable life, I have to admit having done my best to make it so" - John Kingsley-Heath

Sounds great so far
Tommorow is promised to no one. Go live your dreams.

Did a few days after my KMG hunt in one of the Sabi Sand private reserves attached to Kruger where you can go off track to get close to Big 5. Amazing experience.

Look forward to rest of your report.....

The next morning had us back out and chasing buff. We picked up the spoor at a waterhole and caught up to them after about an hour. We got close to two bulls in the thick stuff, but just not enough room for a clear shot. After a short break we picked up a herd of buff at a waterhole and the trackers determined that with the incredibly dry conditions, he had a really good idea of which way they were heading and we raced ahead to set up an ambush on a small trail. True to form the first buffalo appeared shortly after we had set up and began to filter across the trail opening a couple at a time. We waited patiently for a good bull to appear and everyone stared intently into the thick bush in hope that a bull would walk out. Suddenly he emerged and I settled in on the sticks hoping for a shot, but cows flanking him on either side put an end to this ambush and they continued their pilgrimage down the trail. I exhaled and the adrenaline began to subside, time for a new plan. 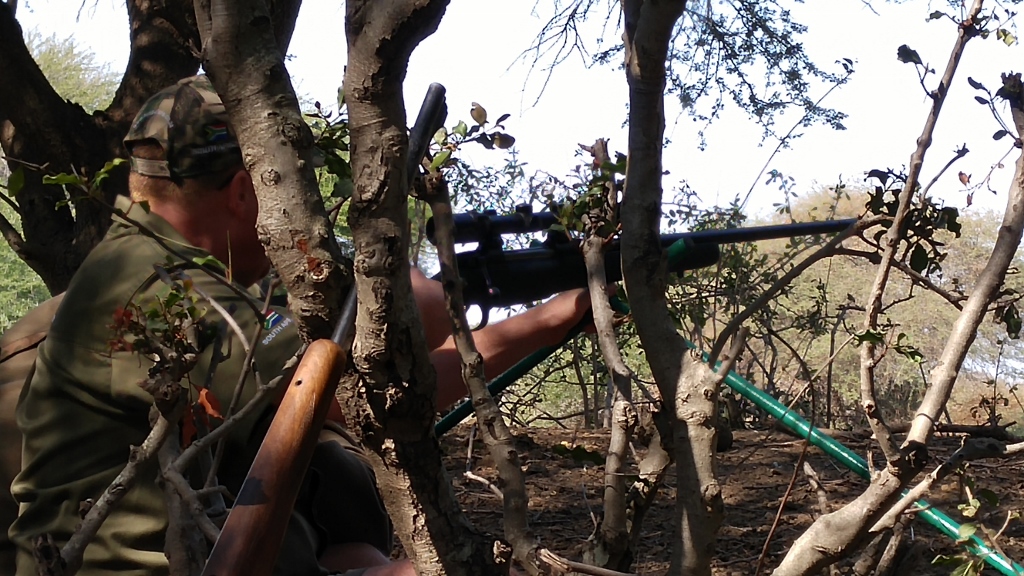 We surmised with the dry drought like conditions our best chance was to stick close to water and attempt to pick up fresh spoor there. We circled downwind of a waterhole and crept on hands and knees up to a small rise where we could see over the water and laid in wait. A young bull stepped out from the scrub and lifted his nose to test the air sensing danger and we hugged the ground to avoid being found out. He drank quickly and continued on high alert for quite some time constantly staring in our direction until he moved off finally and we could all breathe again. As we could see no further evidence of any bulls in the herd we slowly backed out and did a quick check of another waterhole as well checking the trails for any sign of fresh spoor.

With nothing being sited we decided to return to the waterhole and crawled back in to where we had a good view. Marius and I are sitting side by side staring into the scrub wishing for a bull to step out when all at once he materializes in front of us. Marius says “he’s a big old bull” and up go the sticks. I settle in and calmly settle the cross-hairs and whisper “now”, Marius replies “no, cow behind”, I wait two seconds which seems like an hour and reply “now”, Marius replies “no cow still behind” I am now having real life nightmares of this bull walking back into the scrub and I repeat “now” and Marius replies “now” and I squeeze the trigger. The bull is hit hard and spins around going about ten yards before piling up and we simultaneously begin to move forward, the death bellow comes quickly and attracts the rest of the herd out of the scrub, but upon seeing us move forward they turn and move away. We close in on the buff and see that he is still alive but down, taking no chances we add an insurance shot and it is over. It doesn’t quite hit me that I have taken my first buff … it will take some time for that to sink in. 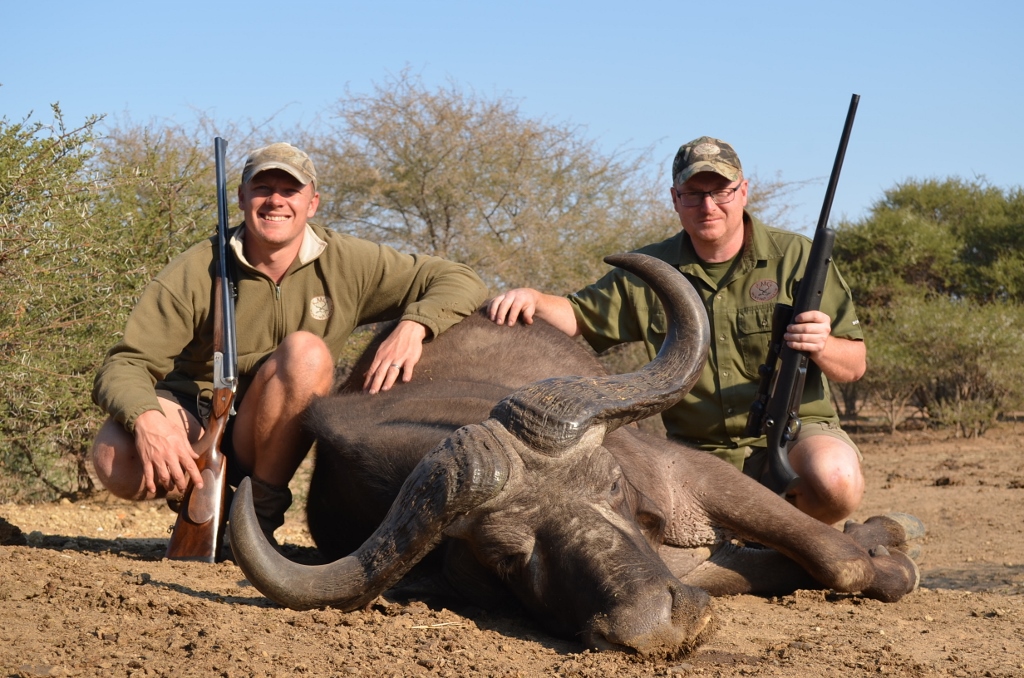 @adgunner nice report , great photo .
on the ocean or in the bush.

Some cool photos from the park! Thanks for sharing! Congrats on the buff as well!
John 3:16

Nice buff, congrats !
You must log in or register to reply here.