Just got back from my safari in the Limpopo with Cruiser safaris. I had a great time but had some issues that I wanted others to know about. So this was my honeymoon trip because it was always my dream to hunt in Africa and it was always her dream to have children so we decided on Africa first. We left on May 21st flying delta to Atlanta and then to Johannesburg, the flight was long and brutal but we got it over with. The Afton Guest house picked us up and we had a nice stay there on the first night, definitely recommend staying with them if you have to overnight in Johannesburg. The next morning Cruiser picked us up at about 10:30 AM and we were off. We stopped at a nice grocery store along the way that had every fruit or vegetable imaginable. It was about a 4 hour drive to the lodge and along the way we met Glyn and Gena that were on their first safari as well and were great people. We also met George who had hunted in Namibia once, he was also a great camp friend. Once we arrived at the lodge we met Tiny who would be our cook, Rudolph that was George's PH, Munsu was our Ph, and Craig that drove us would be Glyn and Gena's PH. We had some fresh squeezed orange juice and were off to the gun range. I had issues with the expiration date on my 4457 form so i decided to rent on this trip. I used Craig's Sako 375 H&H. A couple shots were put down range and we were good. Dinner that night was Eland meat pie that hit the spot and then it was off to bed.

Day 1
We got up at 6:00 which would be our normal time for the whole trip, had an egg and sausage breakfast and left for our hunting area. We drove about 45 minutes and arrived at an area I would guess to be about 10 square miles. The day consisted of walking for about a hour, driving for an hour and repeat. We saw many animals but no luck that morning. We had lunch and slept the heat of the day, that afternoon we got on an Impala but when I put the gun on the sticks a bullet on the sling tapped the sticks and made a noise, off he went. Right before sunset we saw an Impala from the truck and put the stalk on him. We came around a bush and there he was at about 35 yards. I took the shot and he ran away, after a couple minutes of waiting we followed a very heavy blood trail about 25 yards to where he lay. He was a nice old Impala and a great start to the trip. 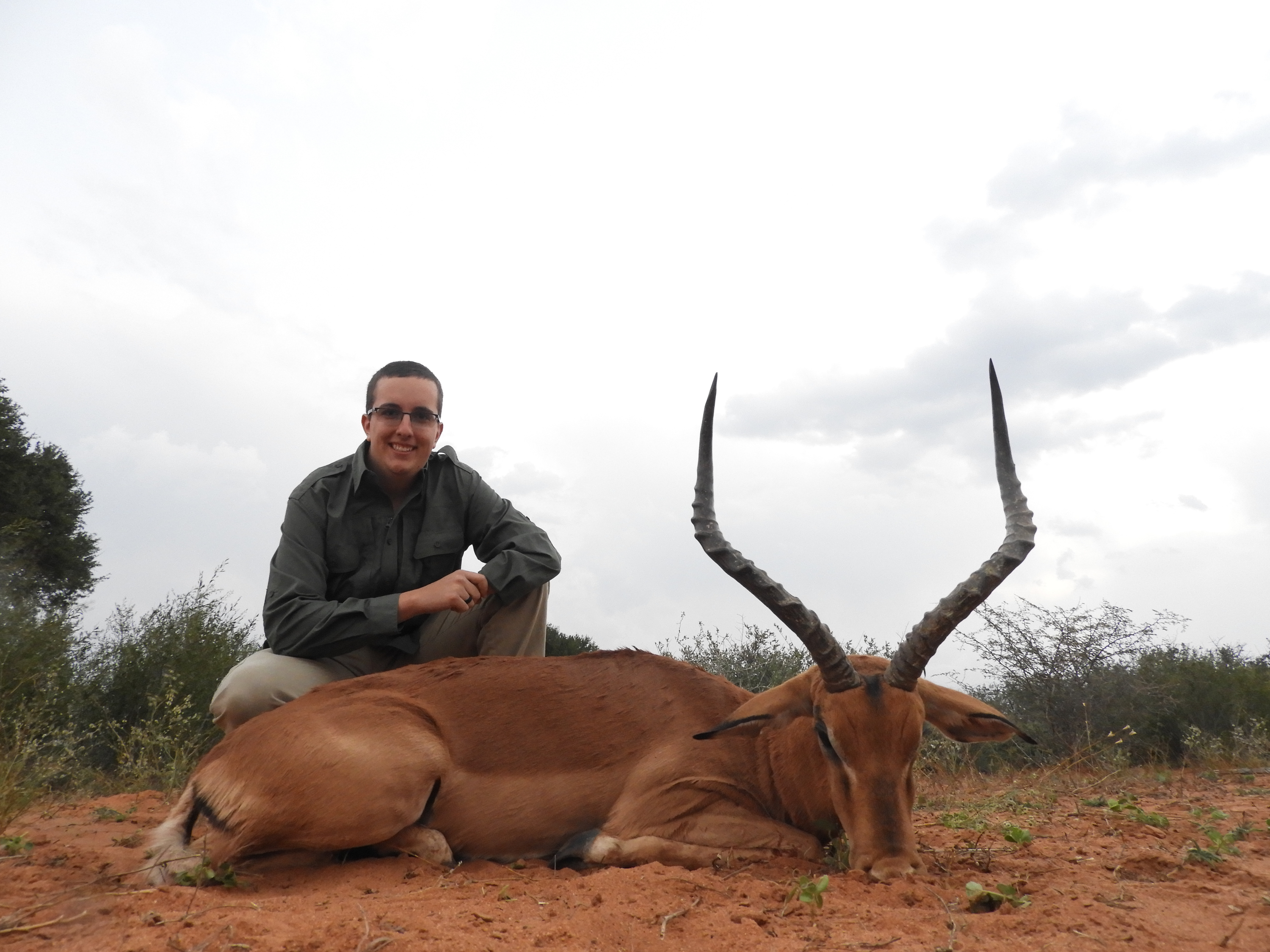 Day 2
Today Courtney slept in because of the long day of hunting the day before so I went out that morning without her. We hunted a ranch that was about 25 square miles and had lots of Gemesbok on it. We got close a couple times that morning but got busted every time. Finally at about 12:00 after walking for about 2 hours and came on a very nice Gemesbok bull. I raised the gun up and pulled the trigger to hear "click" as the gun miss fired. The bull ran away and we went to lunch in a down mood. After lunch we shot the same bullet at the range and it went off so we don't know what went wrong. That afternoon we went back out and after a 5 minute walk came up on a group of Gemesbok at about 45 yards. I got up on the sticks and took the shot. It jumped backwards so Munsu thought I had shot in front of it. When we walked to where it was there was blood and after tracking about 40 yards found it dead. The shot was far back but at the angle was a perfect kill shot 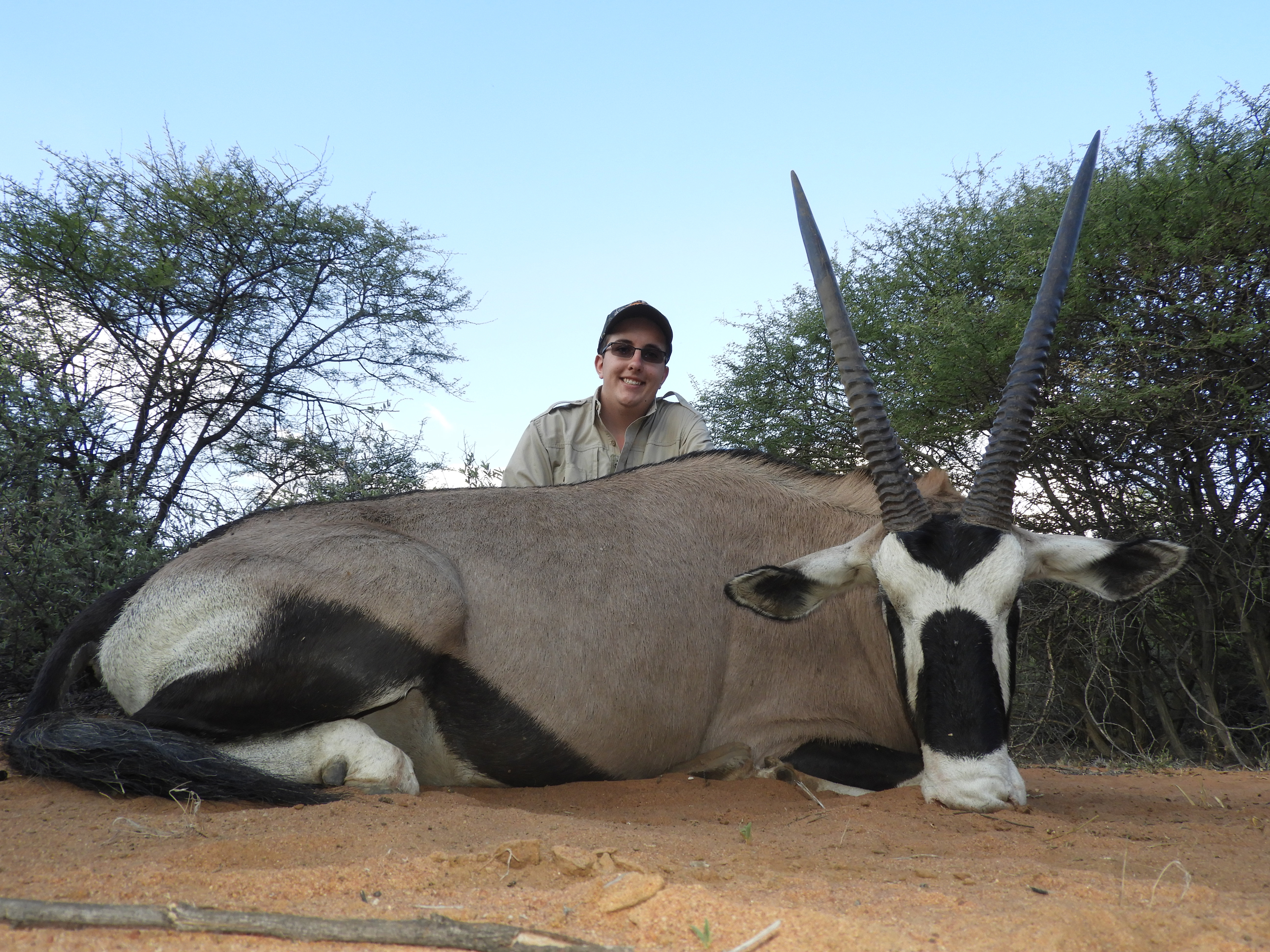 Day 3
We hunted the same ranch today looking for Kudu. We got close a couple times but the Grey Ghost always seemed to be just out of reach and Courtney in the Driver saw him cross the road a couple times while we were out walking. We went back for lunch and Pieter who owns Cruiser Safaris ate with us and we brought up that Courtney wanted to take one of my animals but all the animals left on my list were probably a little advanced for her because shes only ever shot targets. So Pieter offered to swap the Steenbok for an Impala for her and offered his Blaser 243 rifle for her to shoot. We happily accepted and went off after lunch for Impala. I wanted her to shoot off the bean bag on the roof of the truck and not the sticks which put us in for a challenge. We drove around for about 4 hours and got close a couple times with no luck. Finally about 10 minutes before sunset a nice Impala ram stopped broad side at 150 yards and Courtney took the shot. After about 5 minutes we went after him and found him about 25 yards from where he stood. She made a perfect shot and he was a beautiful ram that was about 2" taller than mine. I was so proud of her and I remember it as one of my favorite hunts. 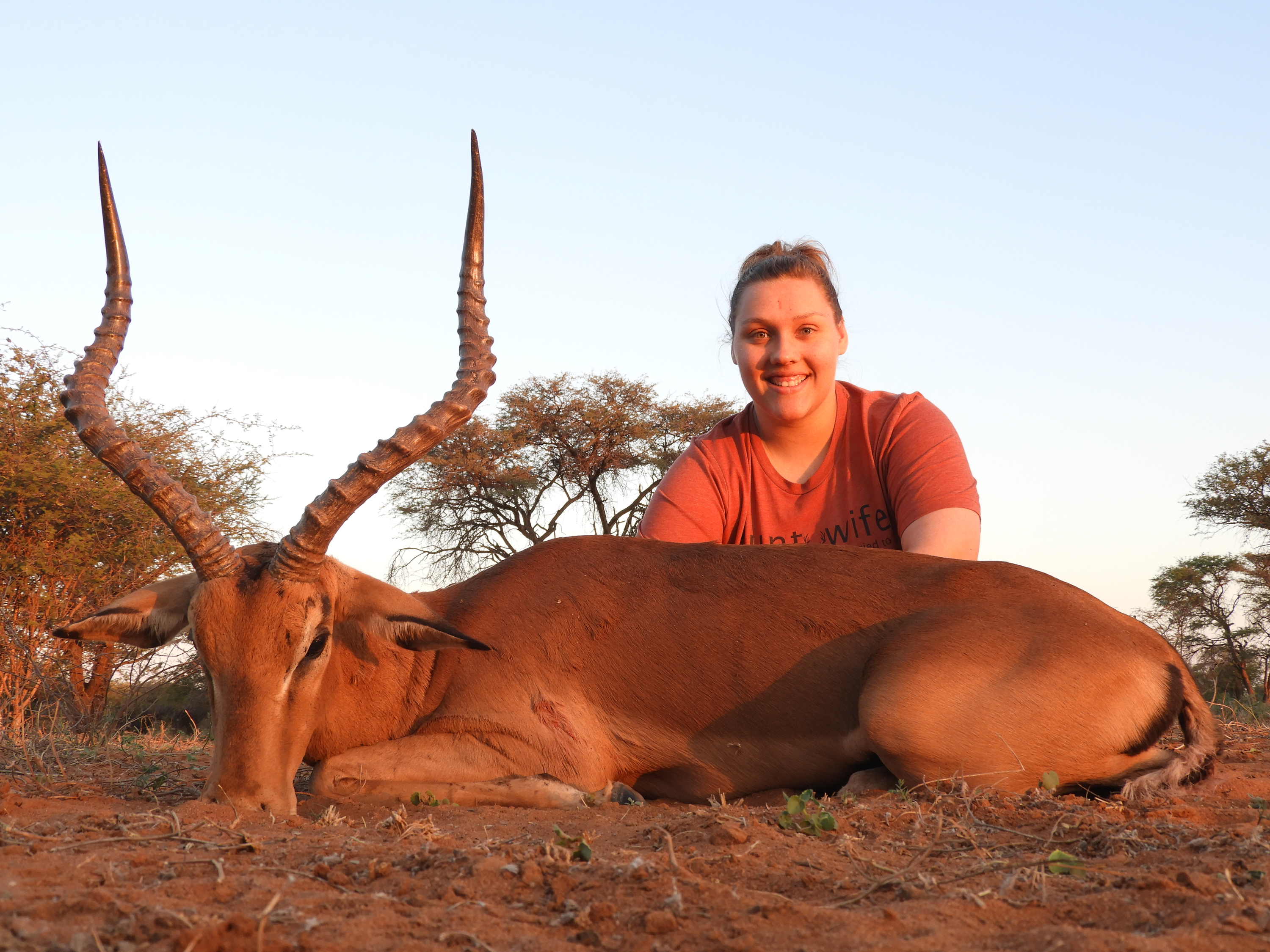 Day 4
We went after Kudu today in an area that was very large and very overgrown. We had to hunt mainly out of the truck. There is some very nice Kudu in that area but they are sure spooky. The closest we came to getting one was at the very end of the day we came up on walking down a fence line. Munsu wanted me to shoot it in the butt running away but I didn't feel comfortable. It turn and ran broad side and I shot twice and thankfully missed both times. It was a long day.

Day 5
After yesterdays disappointment and many hours we decided to sleep in and just hunt the afternoon. At lunch that day I told Pieter how I didn't really want the Blue Wildebeest and he offered to swap the Wildebeest for a Zebra and let Courtney shoot it at no extra cost. So that afternoon we went to Pieter's land for Zebra and brought the 375 along in case we saw Kudu. Around 4:00 the driver suddenly stopped and said "Kudu" so we scrambled to grab the 375 and he pulled forward about 5 feet to reveal a very nice Kudu at 25 yards. I threw the gun up and pulled the trigger to realize I never loaded a shell. So i racked the bolt and pulled the trigger again and it didn't go off. I racked the bolt again with more force and it loaded this time. I shot and the kudu walked forward. I loaded again and took a running shot into the brush, we followed him into the bush and took one more shot to put him down. The first shot was in the shoulder, second in the butt and the third in the shoulder just a little lower. He measured 52 1/2" and was everything I could have wanted. 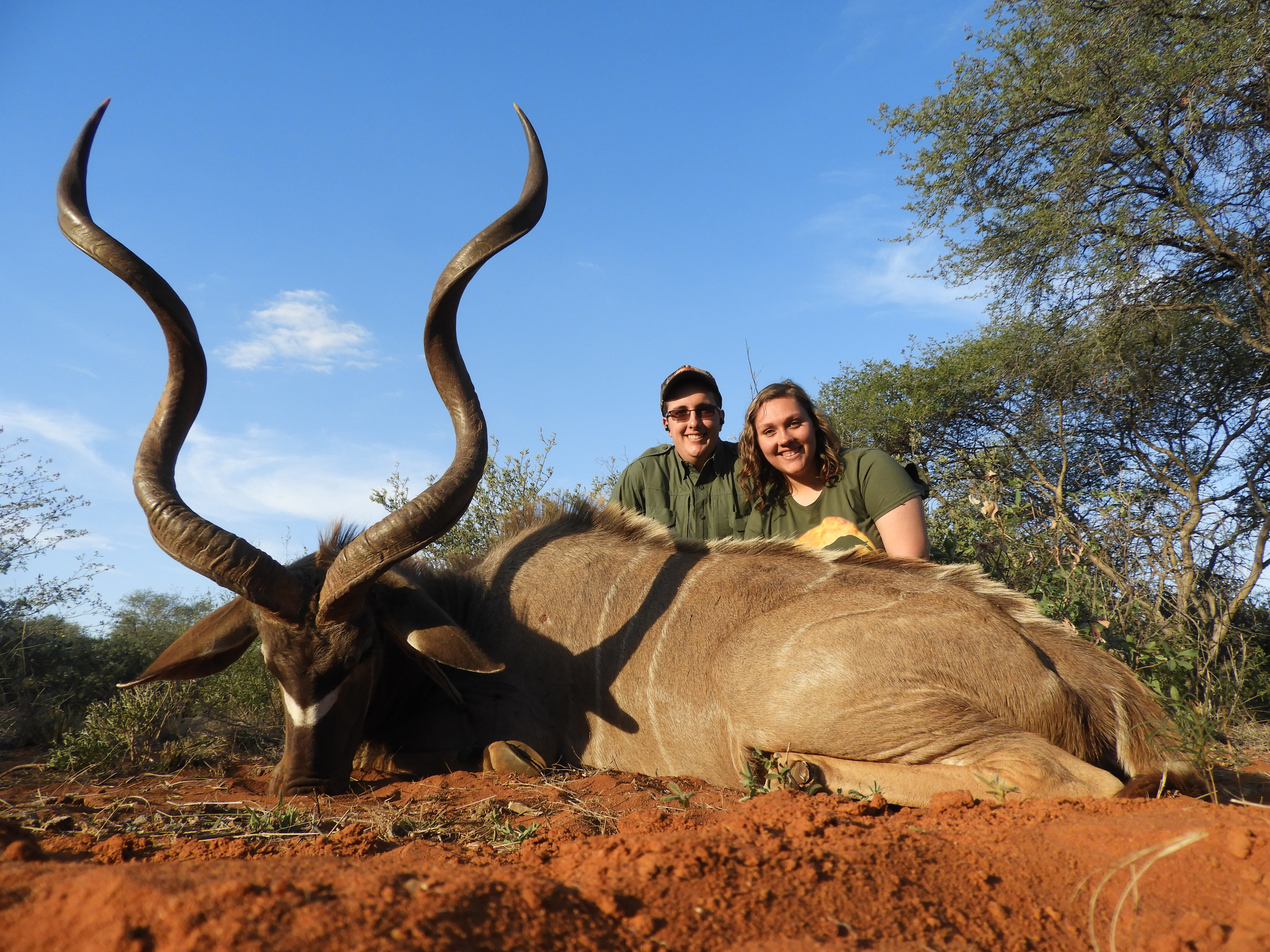 After we loaded the Kudu we kept looking for Zebra with no luck and as we were coming out a good size Warthog ran in front of us and when he stopped I shot with the 375 and dropped him in his tracks. I wasn't too interested in the Warthog but they came through with a good one.

Day 6
All we had left on the list was Zebra for Courtney. Pieter said we would probably have to sit on a water hole but Munsu was dead set on getting one from the truck. So we saw lots running and finally about 10:00 she shot at about 200 yards and hit 10 feet in front of it..... then it hit me that the 7x57 Mauser rifle Pieter lent us was sighted in at about 40 yards for hunting water holes. So we continued on and at 11:00 we came around a corner to find the lead mare standing in the road at 40 yards. Courtney took the shot and the driver assured me it was a good shot. we tracked her about 100 yards to find her dead in the center of the road from a perfect lung shot. 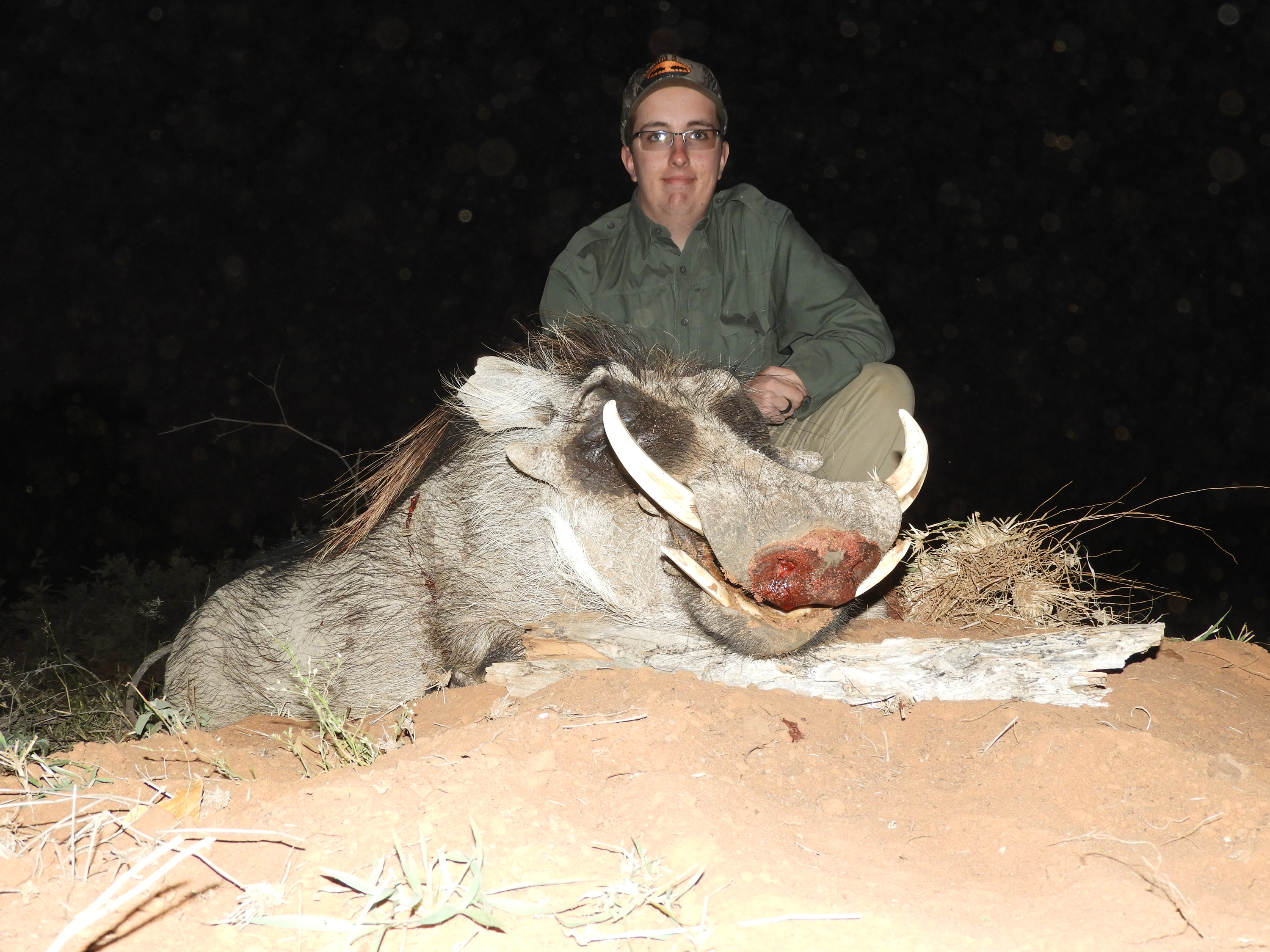 Day 7
Courtney went to the spa and me and George went and took in the scenery. 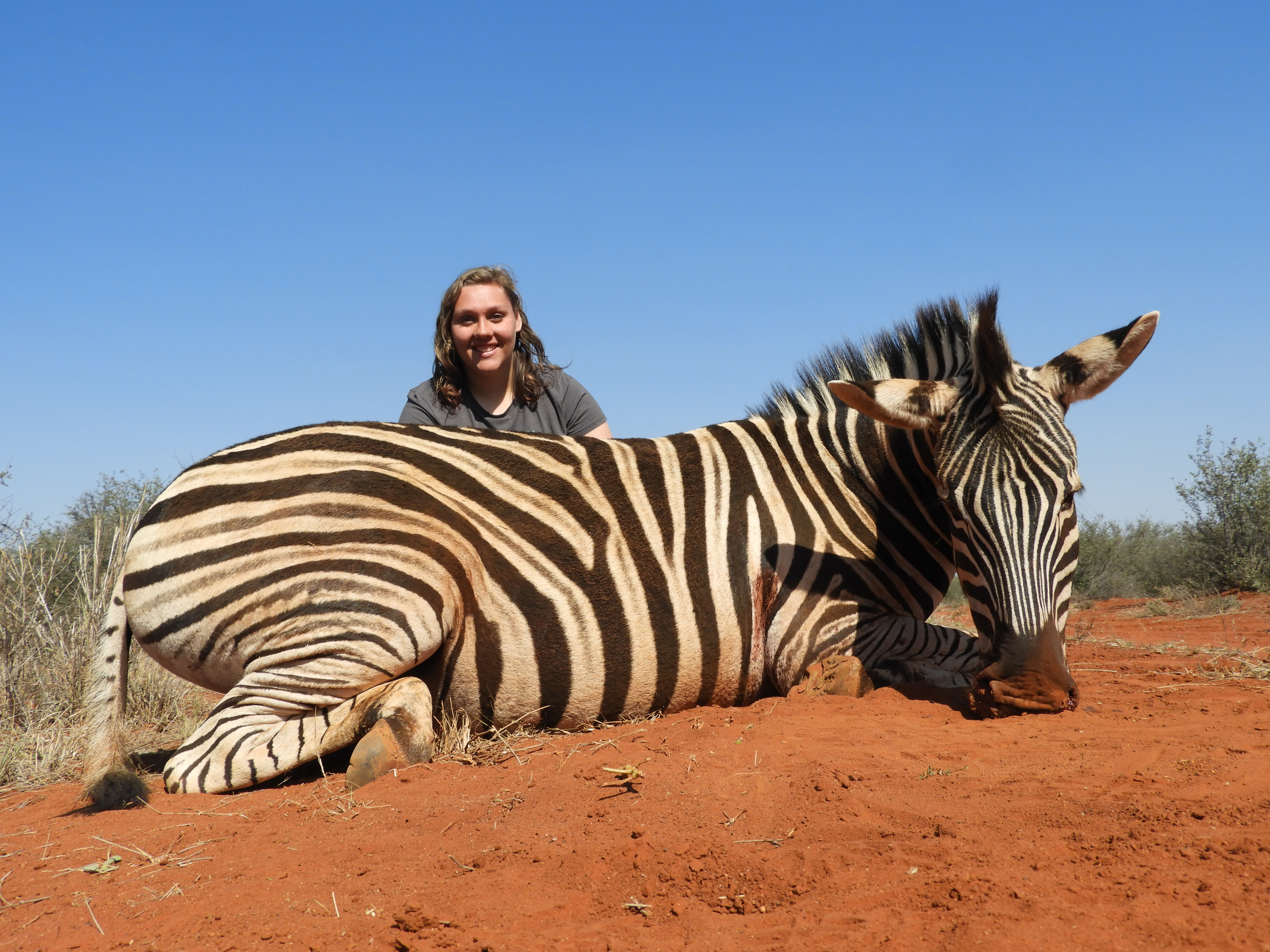 Day 8
We went to Merkele national park as a group with Glyn and Gena. Saw one Elephant, 3 Rhino, Zebra, Kudu, Impala and lots of Klipspringers. 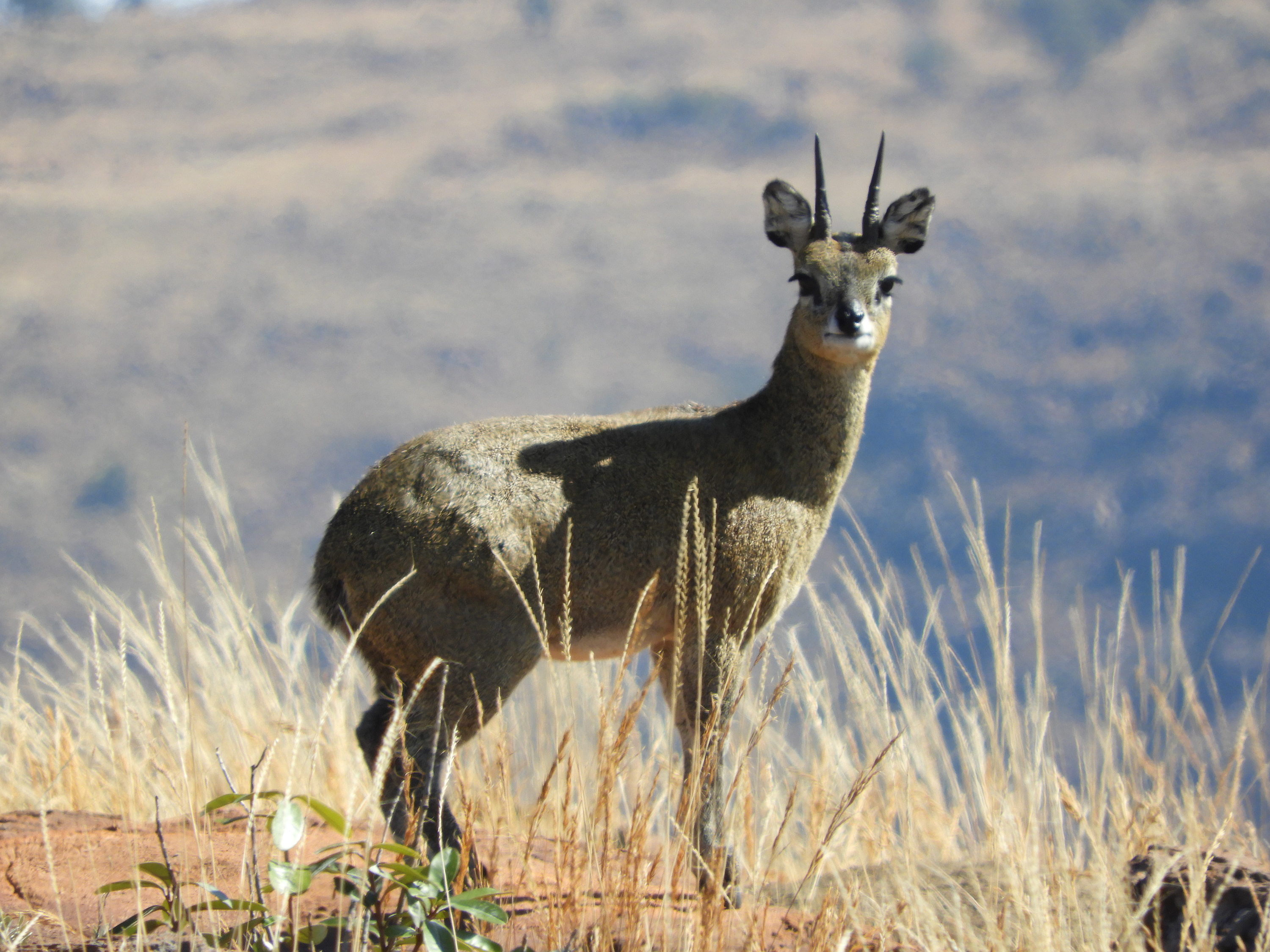 Day 9
We went to an Elephant interaction in the morning that was neat and got to ride them as well. 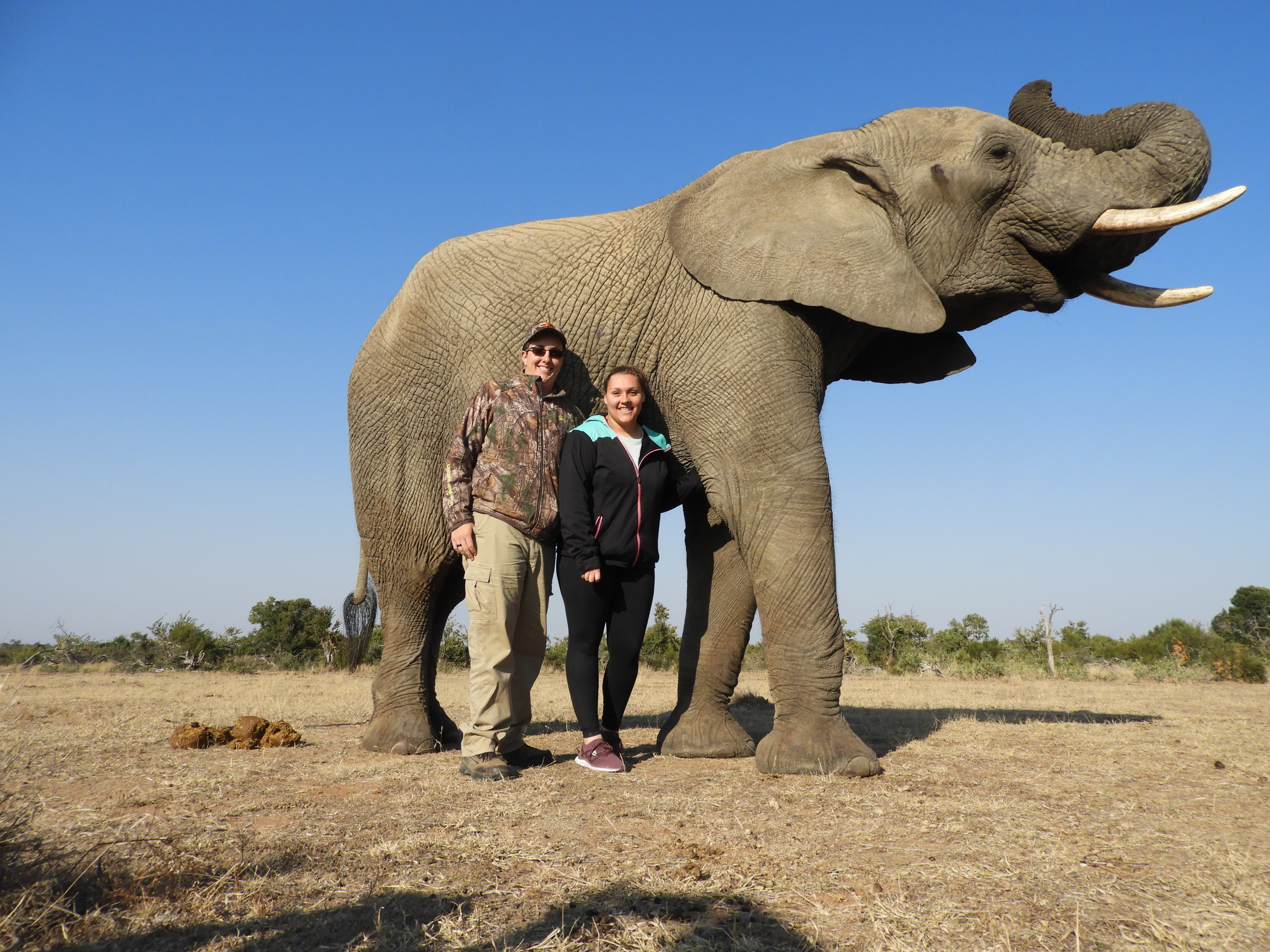 That night Glyn and Gena were going after Bushbuck and we decided to go along for a night hunt. We saw a jackal at first and then we saw a nice Bushbuck about 20 minutes into the hunt. Glyn took the shot and he laid down. He was in some thick brush and he took a couple more shots to make sure he was down. It was a nice trophy and a great way to end the trip. 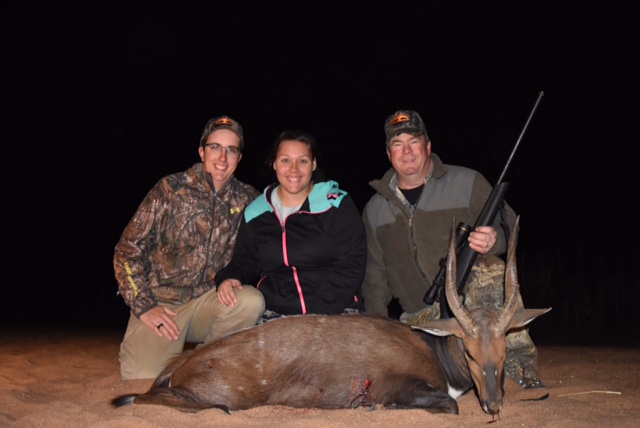 Overall:
The lodge was great and the food was delicious, the staff are friendly and the hunting areas are fantastic. The only issues we had were the Honeymoon suite didn't have a door between the bathroom and the rest of the room so some boundaries had to be broke.....The other issue we had is they offer other activities and we signed up for them before we left. However we would bring up the other activities and it would put the staff in a frenzy to try and get it set up in time. Our PH was Munsu and if you are going to Cruiser and you get him as a PH I will let you know he is very quiet and he doesn't listen to the client when we would spot something while driving. I had a great experience over all those three things were our only grievances 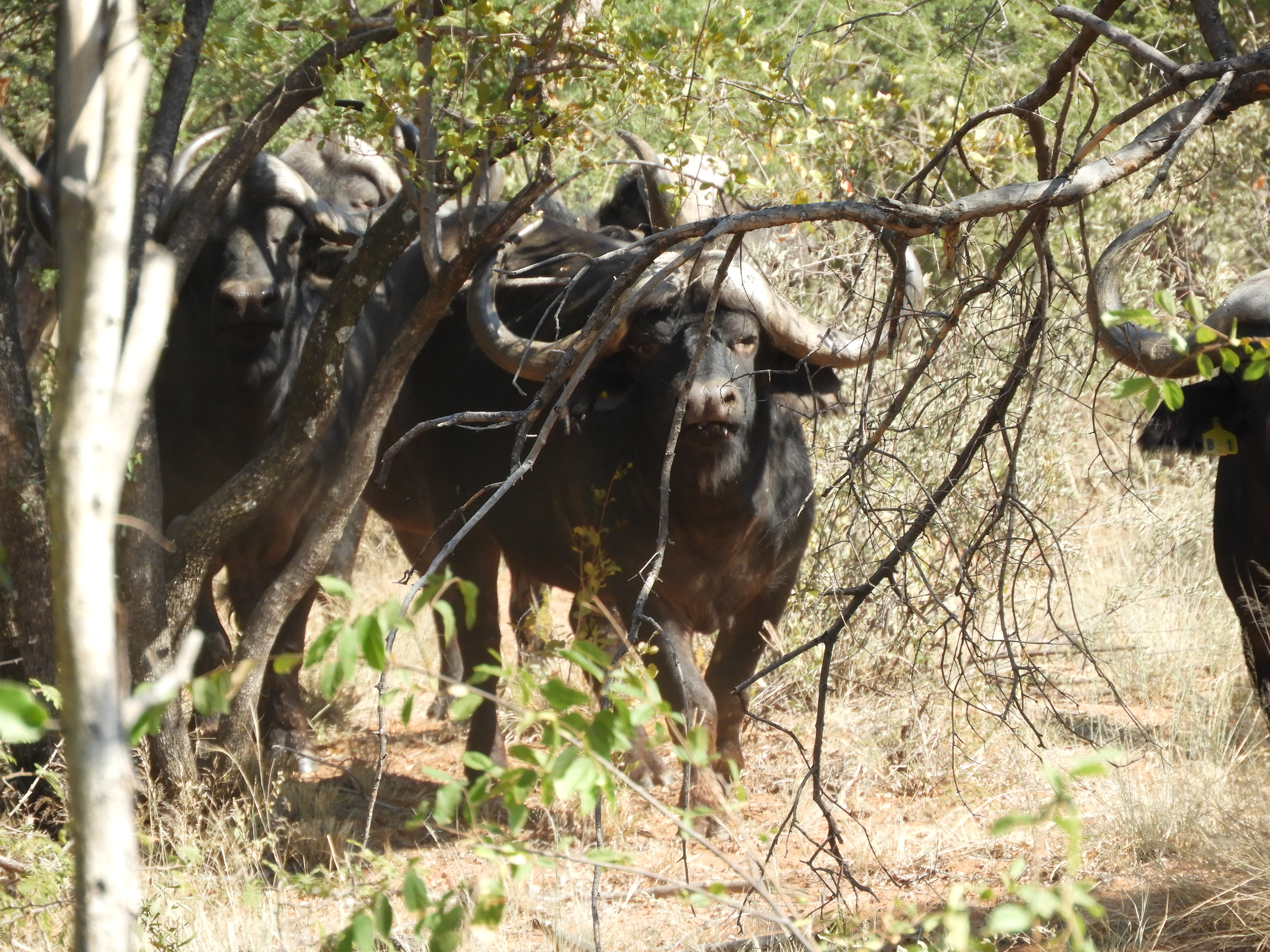 Very good hunting report.
Nice trophies and cool pictures.
You did have a good hunting.
Congrats.

Thank you for the report!

I remember Tiny's cooking very well. I once told someone that she could make sweet ice tea out of swamp water and salt. The PHs are all different I think. Mine was a black man named Hans that in my opinion was second to none. I had the same honeymoon suite but I was by myself. The curtains around the bed were a hoot. Most of the animals we took 14/17 made SCI book. did you do as well?

Some of my photos got out of place at the end of my report but oh well.
H

Tiny’s cooking was fantastic. I remember Hans was PH when we hunted but wasn’t ours. Overall I had a good experience at Cruisers.

Thanks for the write up.
Congratulations on your first Safari.

Congrats on your hunt, and thanks for the report !

Mitchell, you two took some very fine trophies! Thanks for sharing! It makes me want to hurry up and go!
I don’t think I’ve ever seen a Burchell’s zebra that has the shadow stripes between every black line! Nice!
Africa on my mind.

Congrats on a great honeymoon!

Great way to celebrate your honeymoon. Congrats on your hunt. Thanks for sharing.
Bruce
You must log in or register to reply here.