It was a great time and an experience and memories for a lifetime and it is extremely exciting as well as somehow dangerous to hunt buffalo with bow and arrow. We were really close to roundabout twenty buffalos and their was only sparse cover with some bushes and small trees. So it was really challenging.
We hunted in the Limpopo province and this hunt was long planned with my PH Izak Vos from Vos Safaris.

We hunted in different provinces (Gauteng, North-West, Limpopo) and were really successfull with bow and arrow.
It started with a nice 118 Kg (260 lbs) wild boar I could shoot with a clean 26 meter heart shot - so we had enough meat for the week - hahaha.
That was a great start because I could see how incredible my 90# Elite GT 500 bow and the 800 grain Easton Full Metal Jacket and Muzzy Phantom SS 2-blade broadhead (200 grain) performed. The arrow passed through the boar and only the feathers stopped him to fly through. We all were impressed.

On the buffalo it was an really extreme experience as well. We were just three guys - Izak and Johan an accompanying PH with my camera and myself hiding behind bushes and a crowd of about twenty wild buffalo in front of us.
The wind was good and in our favour although it sometimes swirled a bit but the buffs luckily did not get our wind.
I was on my knees and when "my buffalo" stood nicely broadside at 25 meters (27 yards) I could make a really good shot. Izak said it was a brilliant shot directly behind the shoulder.
The buff jumped up and turned around and we could see that the arrow stuck out on the other side - so it penetrated completely thru the buff.
It was so amazing to see that. He went about twenty meters and layed down.
We did not move and Izak told us to be quite and calm to give him time to die because all the other buffalos were still there. After a short while we could hear his death bellow and see all other buffalos rushing to their companion trying to protect him.
A picture I will never forget. No additional bullet from the rifle was necessary.
Then we radioed the land owner and when he came with the "bakkie" (pick-up) and shot three times in the air the other buffalos backed up and we could make some trophy pics and load him on the car.
That was interesting to see this big 800 Kg (1764 lbs) animal loaded quickly on the car.
The slaughtering gave 375 Kg (827 lbs) of meat and a beautiful trophy.

The spread of my buffalo officially measured 41 1/8 inch - wow, that was impressive as well and it is an outstanding trophy.
It has everything a buffalo should have - a big hard boss, nice dropped curls and a wide spread.

The later days I could harvest a big waterbuck with bow and arrow at a different location in the Limpopo province from a blind at 26 meters (28 yards).
That was a great experience as well because I made a frontal shot - which most people do not recommend, but with my equipment I felt totally confident - and the arrow went completely into this big buck.
He dropped dead about 100 meters (110 yards) after the shot.
Also the bushbuck I shot from a quartering towards us position at about 24 meters (26 yards) and the arrow struck completely into the animal.
"Carrying a big stick" is definitely an advantage (more used for rifle hunters but it fits here nicely as well).

I had a great time and enjoyed it.

Once again a big "Thank you" and "Alles van die Beste" to Izak and the Vos family. :happywave: :beer:

If you are interested to hunt with Izak Vos and Vos Safaris with rifle or bow you can contact me or him directly:

Attached are some pics. Hope you like them. Shoot straight! 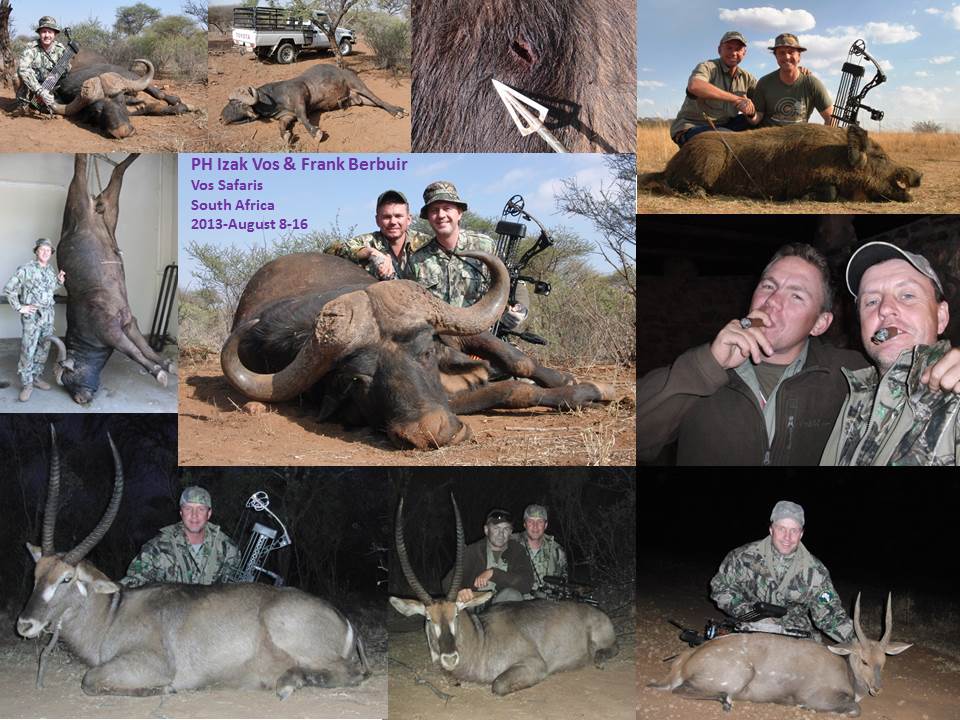 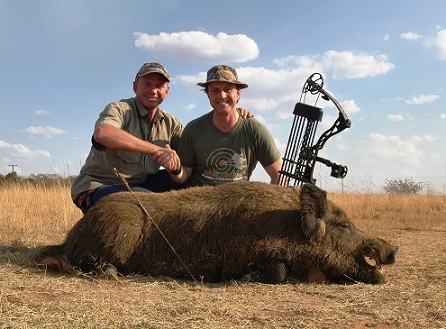 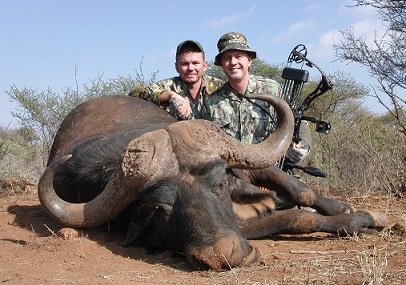 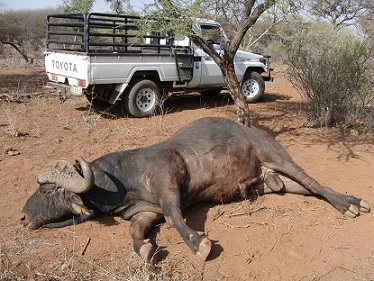 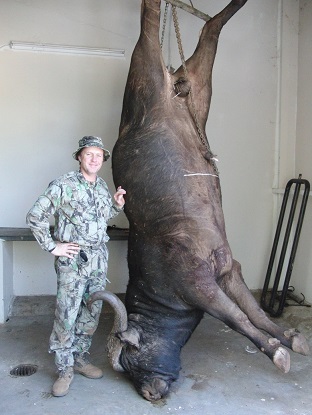 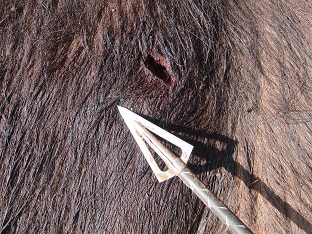 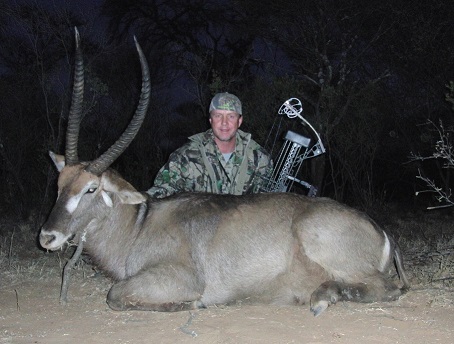 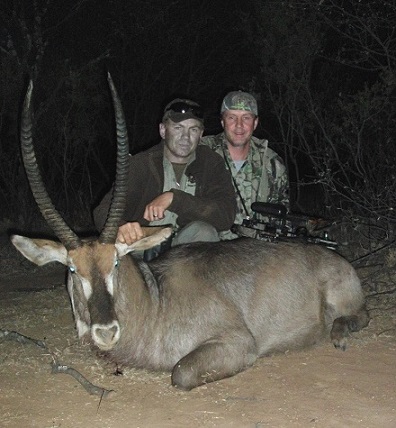 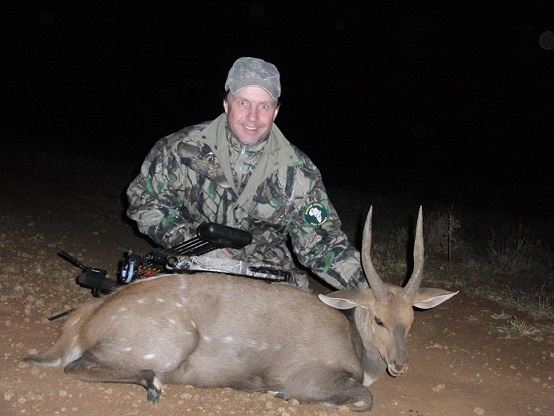 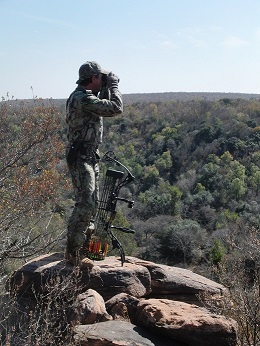 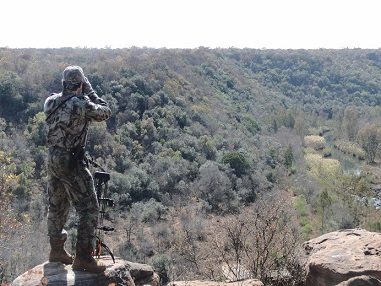 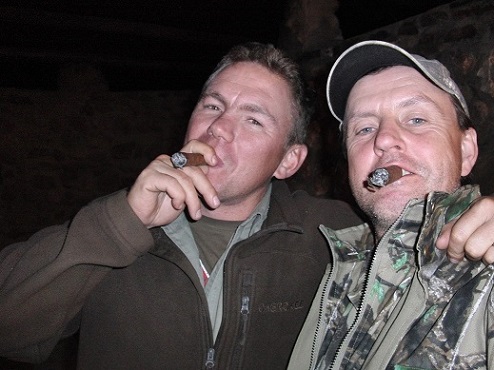 Congrats for a great hunt and very good trophies !

Good shooting. What an experience that must have been. Nice.

Congrat's Frank! That buffalo is a stud!........I had no idea SA had wild boars! I hope that doesn't turn out to be a mistake. It definatly turned out for the worse in Texas!

Congrats with great trophies and an excellent buff glad you had a good time!! Yes we do have wild boars not indigenous though think they have been brought in from Europe. Warthogg would be the local piggy.

Thanks for the report.
Very nice Buffalo.

Great job with your bow and arrow! Thanks for the pictures and hunt report.

Congratulations. Great trophies. Thanks for the report and pictures.
And here I am, returning to Africa of many faces;.... the sloe-eyed temptress with flowers in her hair who stole my youth and my heart, and left me an old man with a kaleidoscope of conflicting memories of many dashed hopes and some fulfilled dreams. E. Echols

thanks for sharing your memories with us frank
nice animals mate
you mustve been able to taste the adrenalin on your buff hunt
congratulations :beer:
THE HUNTER; The person that pays over 90% of the cost for the presavation and maintance of wildlife and gets zero credit for it ................

Congratulations! Thanks for sharing your trophy photos and your hunt report!
Jerome Philippe, Founder of AfricaHunting.com

Buff-Buster said:
Congrat's Frank! That buffalo is a stud!........I had no idea SA had wild boars! I hope that doesn't turn out to be a mistake. It definatly turned out for the worse in Texas!
Click to expand...

Thanks guys for all the congratulations!

The wild boar is more a feral boar introduced to Africa sometime and not indigenous as Habu wrote.
Nevertheless it is a nice trophy and they are a good eat.
We had chops, rips, sausages and a great tasting salami made of it.

... and yes on this close up buffalo hunt I could feel my heart pumping up to my throat :rock:

nimrod-100 said:
Thanks guys for all the congratulations!

The wild boar is more a feral boar introduced to Africa sometime and not indigenous as Habu wrote.
Nevertheless it is a nice trophy and they are a good eat.
We had chops, rips, sausages and a great tasting salami made of it.

... and yes on this close up buffalo hunt I could feel my heart pumping up to my throat :rock:
Click to expand...

Wild boar is indigenous to North Africa, you can find them in Morocco and Algeria, as far as I know.

Congrats, sounds like a rush!
Why we hunt, even lions? Real hunters need thriving wildlife, so we help make it happen. - Olivia Nalos Opre

CONGRATULATIONS FRANK!!! So happy you got your bull!!!

Congrats frank really good buff and waterbuck, glad you had such an awesome time....

All awesome animals and especially impressive to collect with the bow.

Just seen you report all I can say is AWESOME! Congrats
Enjoy Life Now! It has an Expiration Date.
You must log in or register to reply here.