SOUTH AFRICA: BOWHUNT: Back From My First Trip

I'm back from my way to short trip to Africa if I have one regret in is that I could not have stayed longer but life and the bills go on.

I started thinking about Africa long before I pick up a traditional bow. My first inquiry about a possible bow hunt with Lammie Potgieter of Dare To Bowhunt in 07 or 08 I think. I have talked with several other PHs but Lammie seemed to live bow hunting and his operation is for bow hunters. Most of his clients shoot compounds and that is how our relationship started but when I expressed the desire to hunt with a traditional bow Lammie stepped up to the task and did what was necessary to accommodate. Lammie has taken game with his long bow and knows what it takes and understands the challenge of our equipment.

Our first day did not start well, or so it seemed as my first opportunity at a very nice Impala ram ended in my bow tip hit the top of the hide with a sound that was probably heard back home and my shot missed clean and high. Redemption came later and I was glad I had missed the first when this guy came in. Lesson learned and some adjustments my shot was true and the ram expired in a very short distance. He is 22 ï½¼ inches tall. I put my Big Jim Thunderchild between his horns to give an idea of mass. I was pleased to say the least. 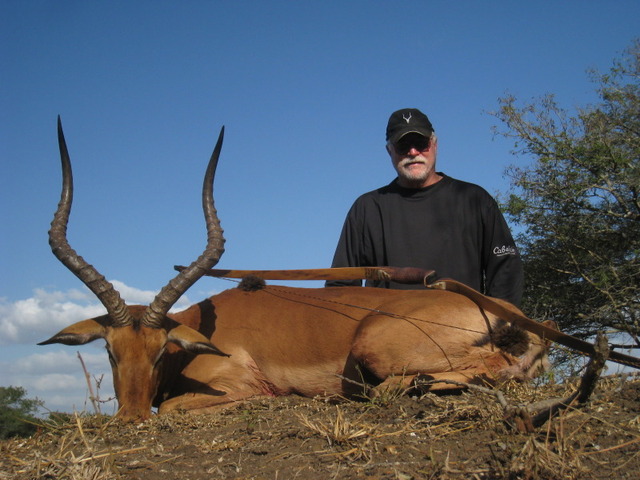 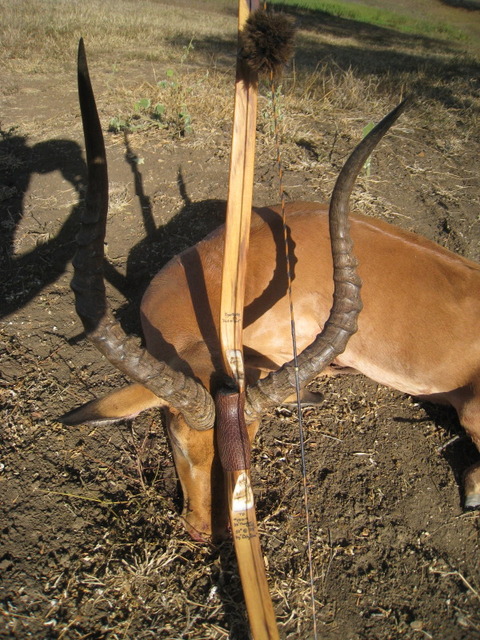 Allison, Lammie's wife is a very gracious hostess and goes out of her way to make sure the guests get a chance to experience the flavors of South Africa. We ate game meats (Impala, Blesbok etc) and sampled South African wines that were excellent. I am a California native and I can honestly say there wines are on par with some of our best. The accommodations were excellent and my cloths were laundered daily!!! My room was a separate bungalow with very nice furnishings a shower and a large Jacuzzi tube. There is a pool right outside the door and a giant fire pit off the main lodge that is stoked every evening. Lammie and Allison have done a wonderful job making a stay with them a great experience. 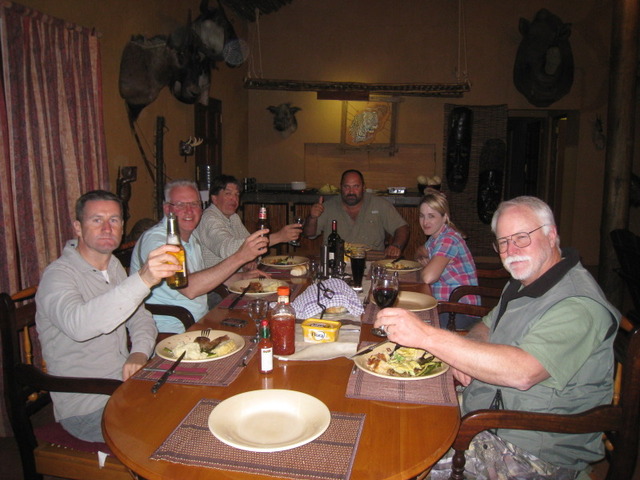 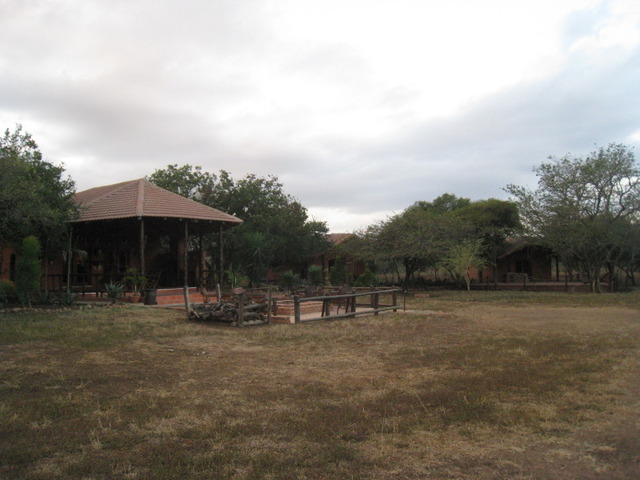 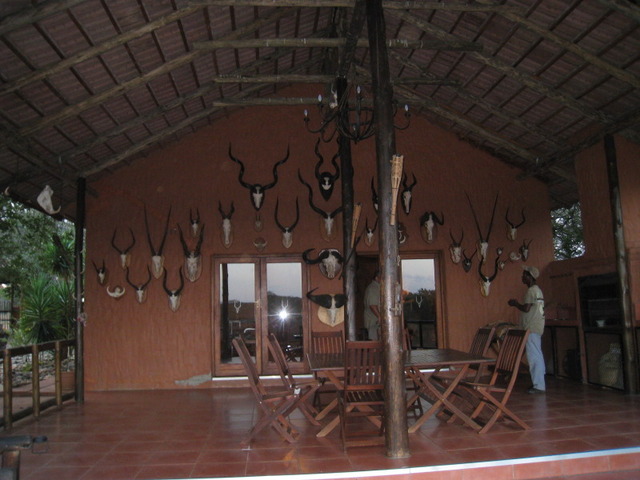 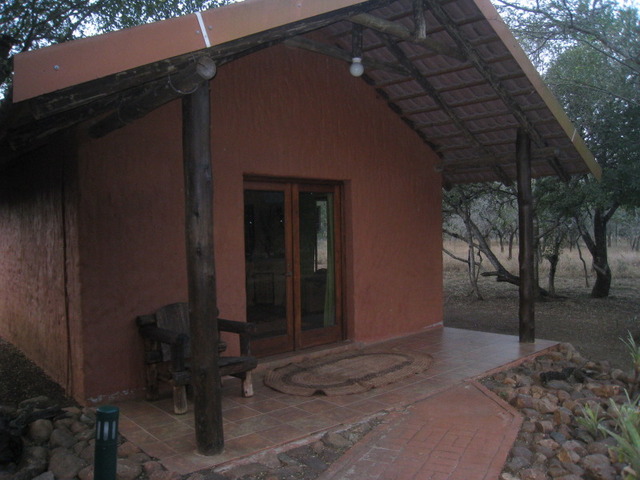 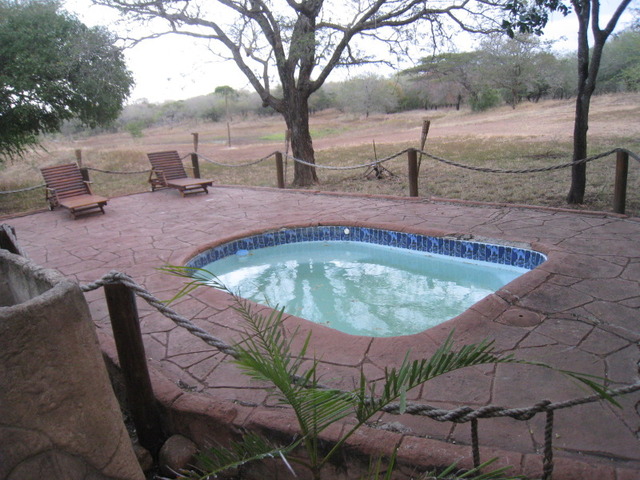 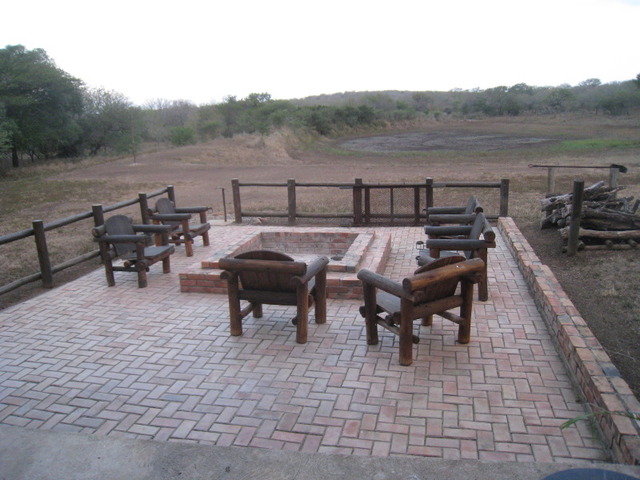 The next day we went to a different area. Lammie as I said before went out of his way to pre scout and put me in a position to have the best opportunity for success. He had put up a pop up blind in some thick, thick bush. It was a very small blind and the longest shot from this blind would be 12 yards at the most and most likely closer. I was pretty much in the blind for the whole day and toward evening Lammi's work and my patience were rewarded. This Nyala bull played cat and mouse for quite a while before he gave me a shot. Because I was so close and sitting on the dirt, I worked to me knees bent over came to full draw and slowly rose so that my arrow cleared the window, released? the bull tore off into the bush. We probably went after him a bit premature because it was getting dark quick and we didn't want to loose the bull to a scavenger or opportunistic predator. My hit was a bit back but with Lammie's tracking skills and the aid of his two dogs we recovered the bull and I took a deep breath of relief?

Nyala are incredible animals and more so when you are this close. During the time I spent in the blind I saw a dozen cows and calves, monkeys and some beautiful birds. Setting in the blind was one of the pinch me moments of my life? sounds a bit sappy but true. 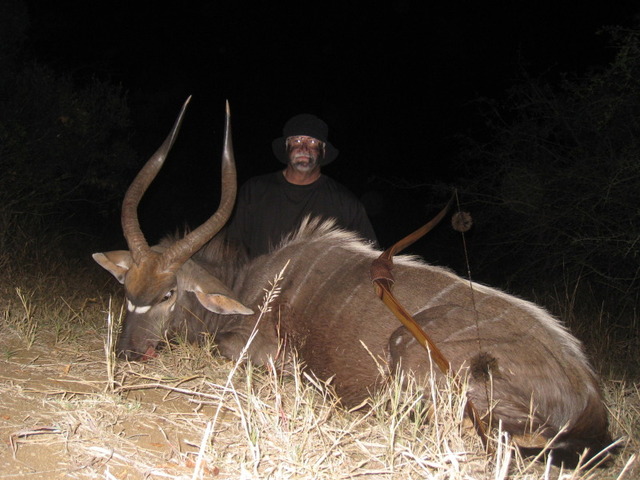 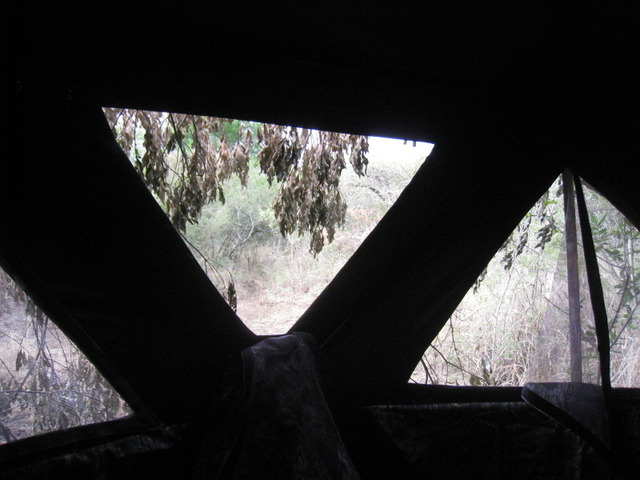 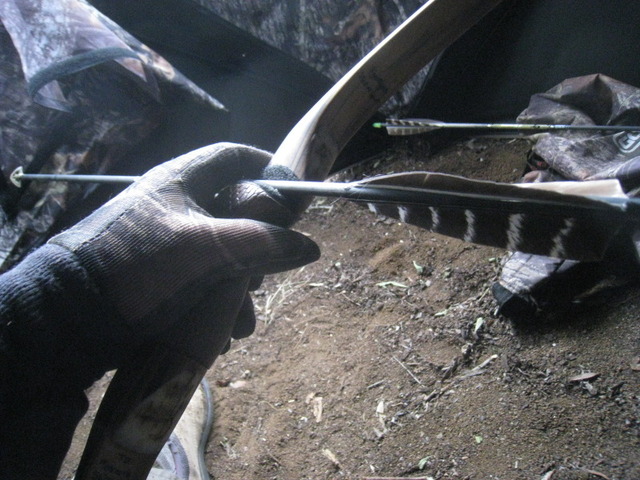 Day three we move to another location and had an opportunity with a Blesbok. Before the Blesbok came in we had a bunch of Wildebeests and a Giant Warthog. I should probably say at this time that I am shooting a 56 50@28 Big Jim Thunderchild and the Warthog was a bit on the long shot side with my equipment so he got a pass. I might have made the shot work but with Warthogs they either dye in a recoverable distance or they run until they find a burrow go in it to recover or dye. After a bit more time this Blesbok came in. We were in one of Lammies permanent hides and I took the shot. 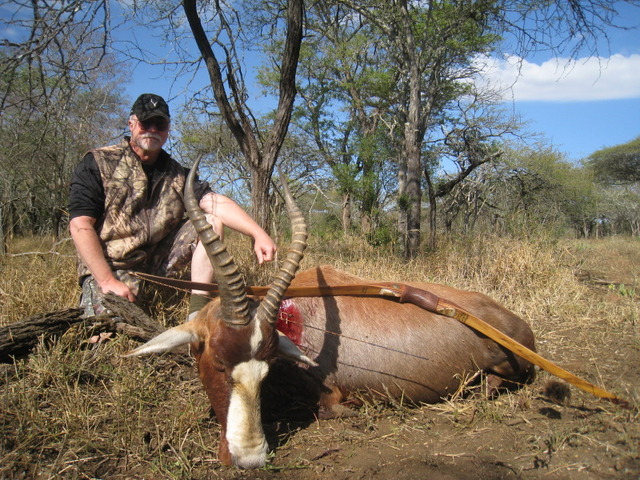 I only had five actual hunting days because of my job obligations. Lammie did an Excellent job making them count.

Day four found us looking for an opportunity at a Warthog. I was looking to the left and saw this red streak blast across and opening. I instantly uttered the words Red Duiker and Lammie looked and confirmed. Once the Duiker was in the brush he went about the task of eating these seed pods that all the browsers seem to relish like candy. Soon it was apparent there was also a female that had gone unnoticed doing the same. I turned to Lammie and we agreed that the game was on and if the Duiker gave me the shot I would try. I have to say that before I came to Africa I had read books, watched videos and emersed my self in as much information as I could. I had also seen a couple of videos were a Duiker was missed by archers using much faster equipment than mine. These little animals are food for everything that eats meat and have supernatural reflexes.

The duiker finally can toward us and bent down for a drink. I prepared for the shot and when the Duiker raised his head and looked in the opposite direction (maybe looking for the female? ) I released the arrow, he still moved a bit but the shot looked good. I think Lammie was shocked as he turned with a look of disbelief and said æ·»ou got him Then a big grin appeared one his face... I think he was as happy as I was !!

Now came the part that is the killer for me the wait. The Duiker had run up the hill and we lost site as he entered the brush? Lammie called the lodge for pick up and we waited for what seemed an eternity I have to tell you this little antelope had me shaking. This was an opportunity that I had been blessed with. The skinner that works for Lammie has never even seen one and shooting one with a longbow well??? Allison pull up to the blind and Lammie said he was just going to check for blood and we might give him a bit more time if it didn't look right. I was obedient and stayed with Allison at the hide as much as I wanted to check it out for myself, after an extremely long minute Lammie immerged from the bush holding the Duiker with one arm. It had expired right were we had last seen him and in fact was already a bit stiff? I was so relieved!!

Lammie says he is eight to ten years old. He is an amazing looking creature and to have been given the opportunity to take him was a blessing to say the least.

For perspective my bow is 56" and the tiny antelope easily fits inside.... 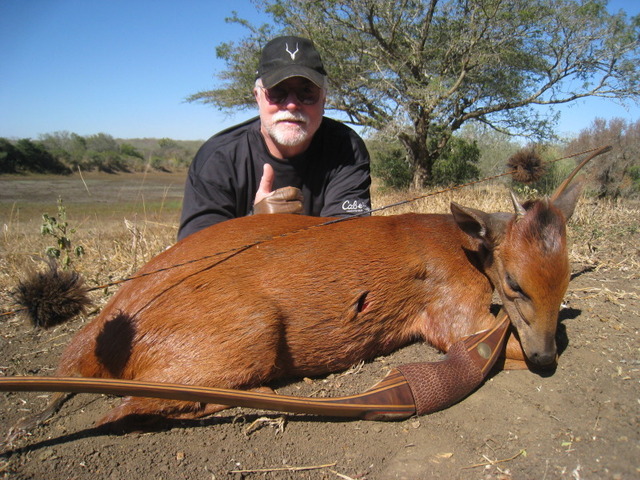 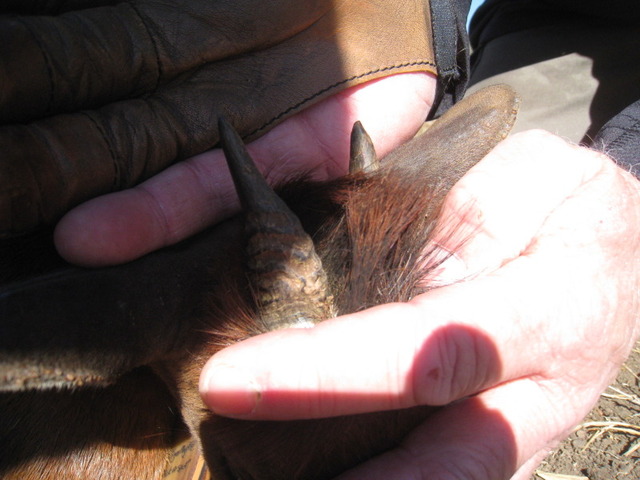 Coaster, I'm enjoying your report and photos greatly. Taking that beautiful red duiker with your longbow in a great accomplishment. Keep the report coming.
Randy

Congrats. Red Duiker is certainly an animal I would love to take.
Why we hunt, even lions? Real hunters need thriving wildlife, so we help make it happen. - Olivia Nalos Opre

Great pics and great animals, especially with traditional equipment. Quiet an accomplishment. That Nyala looks like a true giant! Congrats!

Have to love that little red bullet.
L

Thank you Kip for your kind words, you were a 'model' client and we all enjoyed your company.Until next time..........

Very impressive, very nice animals, and a great bowhunting story. Congrats, and hope you have as much luck on your next hunt in Africa.:thumb:

Congrats on some great animals! The more I see the little guys the more I like them....maybe next time for me????
R

Africa and archery, what a great mix. Congrats on your harvests.