June 12
Up at usual time and off by 7:30 am looking for Gemsbuck. We covered along of ground and finally found a herd late in the afternoon.
Sun was starting to set and there was a huge cow in the herd. I took a shot at about 250 yards with the 375HH. Hit her low in chest

We followed blood and tracks till it was decided by Arrie and Joseph to leave her over night.
We were to leave back to Bos en Dal main camp the next morning. It was decided we would look for her up until noon the next day.

June 13
Left camp at daybreak to follow up on Gemsbuck. Joseph found her tracks where she had split from herd and was alone now. After tracking her till noon it was decided we needed to leave back for main camp as other hunts were scheduled the next day.
Arrie said he and Joseph would continue on the tracks and find her. About 3pm Gerrit got a message from Arrie that the had found her and finished her off. I regret not making a clean shot and thankful that Arrie and Joseph found her.
I do t have any pics of her but she tapes over 43 inches Arrie said.

Arrie was with Gerrit and I on my 2019 buff hunt… what and excellent PH! And just a great guy overall… awesome that you got to experience the Kalahari with he, Gerrit, and Louie!

It’s a bit unnerving when you first find out a lion has circled around to your back side. I had the same experience except mine wasn't feeding! Congratulations!
Two fine Kalahari gemsbok.
Can’t wait to read what’s next!
Last edited: Jun 21, 2021
Africa on my mind.

June 14
Up early 4:30 am as need need to be on the road by 6am. It is about and hour drive to where we will be hunting Cape Buffalo.
This is the same property that I took my 2019 Bull at and also Dave @mdwest with Gerrit.
On this hunt it will be myself, PHs Gerrit, Frikkie, Louie and Francios. What better team could I ask for for backup and guidance.
We arrived about 7:15 am got loaded up in Gerrits truck and headed off up the mountain.
This is a mountainous area with rocks and deep valleys. The strategy here is to ride and glass the areas. No cutting tracks as it is 95% rock.
After about 2 hours we spotted the first herd of Buffalo. After getting to within about 500 yards and glassing them it was mostly cows with calves and young bulls. The biggest bull although good was still in his prime. We moved on and covered more ground glassing hill sides and ravines. Around 11 am we spotted a second herd on the opposite hill side.
We started moving slowly in there direction with the wind in our favor. We got to about 300 yards on foot from them to glass them over good. At first all we could see were cows and calves, about 35 total. Then the old man stepped out and decided to lay down and sun himself. He was a brute and old bull just what we were looking for. We got the wind right and started in slowly as we could. We got to about 80 yards and he was laying down with some cows and some milling around.
One old cow spotted us and alerted the group.
We were in a good position and the sticks went up. The bull rose to his feet and turned giving me a frontal shot. I was steady on the sticks and hit him center with a 500 grain Aframe from the 458 Lott. He bucked turned and ran behind brush, a couple of the cows bolted and started coming at us then stopped about 50 yards away and turned back to the herd.
We moved for a better position and saw him standing behind a tree. Shoulder was open and hit him with a second round and he started bulldozing dirt! Solid hit. Followed up and put 1 more insurance shot between the shoulders from the back.

What a bull he is! Just what I was looking for, old and with a lot of character. 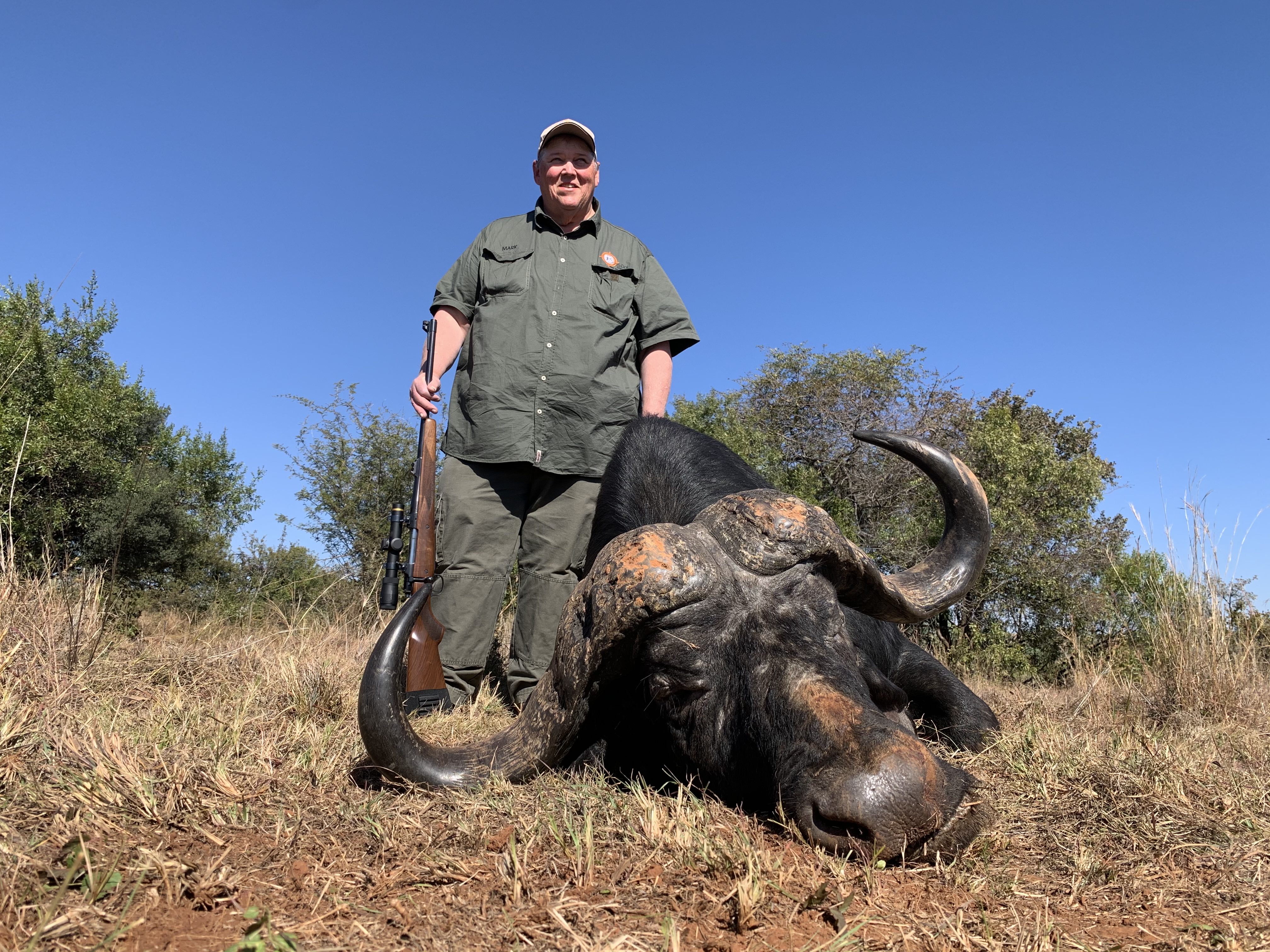 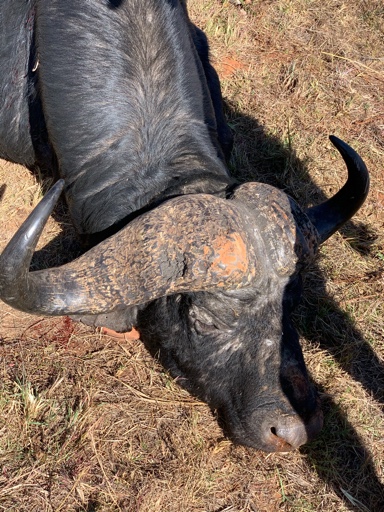 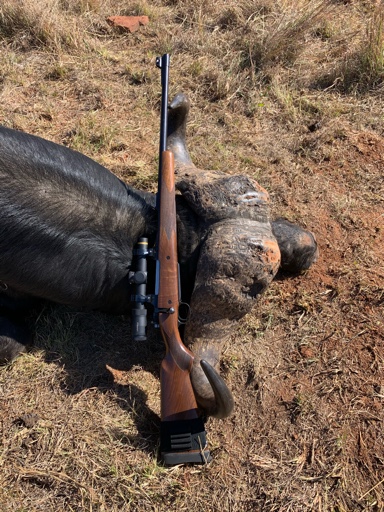 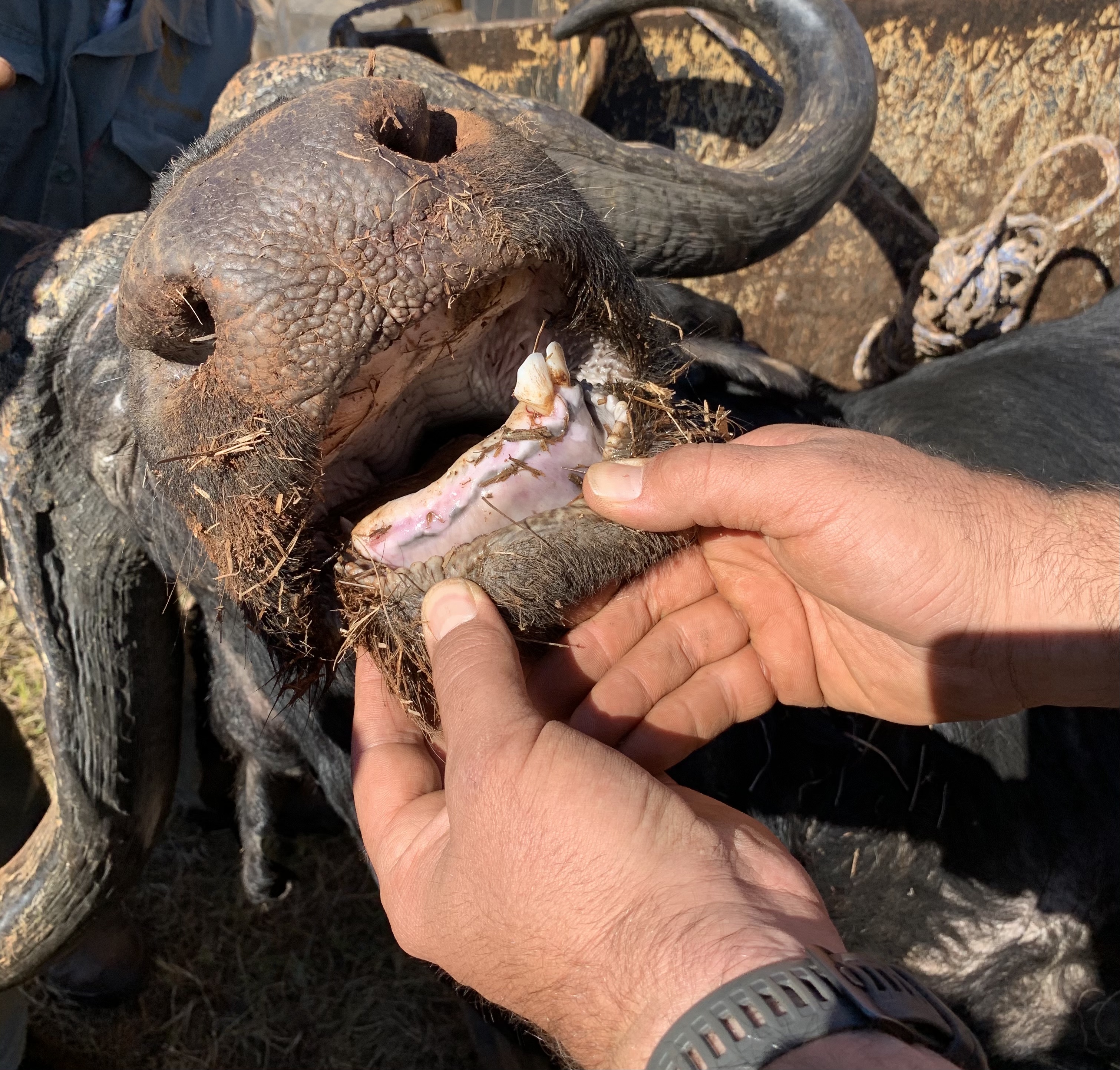 He only had two bottom teeth left!
S

Outstanding. Thanks for taking us along!
GA Hunter 2/2/2019: "....tell your outfitter and PH that a big kudu would mean a lot. Then go enjoy yourself and take what the bush offers."

Mark Biggerstaff said:
June 11.
Up at 5:00 am and started getting ready for the day. Light breakfast and we loaded up about 7:30 and were off to find fresh tracks. Not long after we left camp Joseph spotted were a lioness was chasing an animal across the road. We started working another grid pattern and found where she had drug a kill across the road.
We unloaded off the truck and everyone got there rifles in order and plans were laid out.
Joseph would take the lead with the rest following close behind.
The brush became very thick and as we closed in we bumped her off her kill! She was eating on a Springbuck she had just taken.
View attachment 407901

We started tracking her and after awhile Joseph said she was circling us and headed back to her kill!

We back tracked to the kill and she had been back there and we had bumped her again. The bush is thick and hard to see very far ahead.

Joseph picked up the tracks and we started following. After about an hour he decided she was leading us around in a circle again and was going to go back to the kill.

We sat up at a road crossing to wait on her to cross.

Well that did not plan out like we thought it would.
She came in from down wind of us and Louie spotted her at our backside at about 40 yards.
She turned and ran off to our right into some thick stuff.
We then heard clawing and tree limbs breaking! Close to us. Yes Lions can climb trees! We spotted her about 80 yards away up in a tree watching us! That was her mistake!
Sticks went up and I told Louie to give me his shoulder for an elbow rest.
I had a frontal shot on her the way she was standing on the limb. The 458 Lott did its job!
She rolled out of the tree, we have it about 10 minutes for all to settle down the approached the tree. She was laying there under the tree!!
What a relief to know I had placed a perfect shot on her.
View attachment 407902
She had bitten her own foot when she was hit and fell. We moved her out for some pics and to relive the hunt that just happened

We got her loaded up and then off to camp for skinners to do there work and we had a nice lunch and relaxed a bit.
Click to expand...

Mark, really enjoying your hunt report, this is an exciting trip! Thanks for sharing, looking forward to more!

Damn that Caprivi would have looked pretty in that picture! Lol. Great bull Mark!
"Montana seems to be what a small boy would think Texas is like from hearing Texans" John Steinbeck

Fine old bull! Sadly I can relate to old and missing teeth!
Africa on my mind.

Nice cat and a great bull!

Wow, what a beautiful lioness, and old warrior bull. Congrats on a fantastic hunt. Is the lioness exportable?

Thanks for the report! Awesome! I hunted with Gerrit and he runs a good outfit!
Bowhunter addict

PARA45 said:
Wow, what a beautiful lioness, and old warrior bull. Congrats on a fantastic hunt. Is the lioness exportable?
Click to expand...

. It will be mounted as a rug and euro skull mount and reside in the Bos en Dal Lodge with all its paperwork incase one day while I am still alive it maybe can

Will update more as I can. In from days hunt. Now it’s Bush TV time with a dirty coke 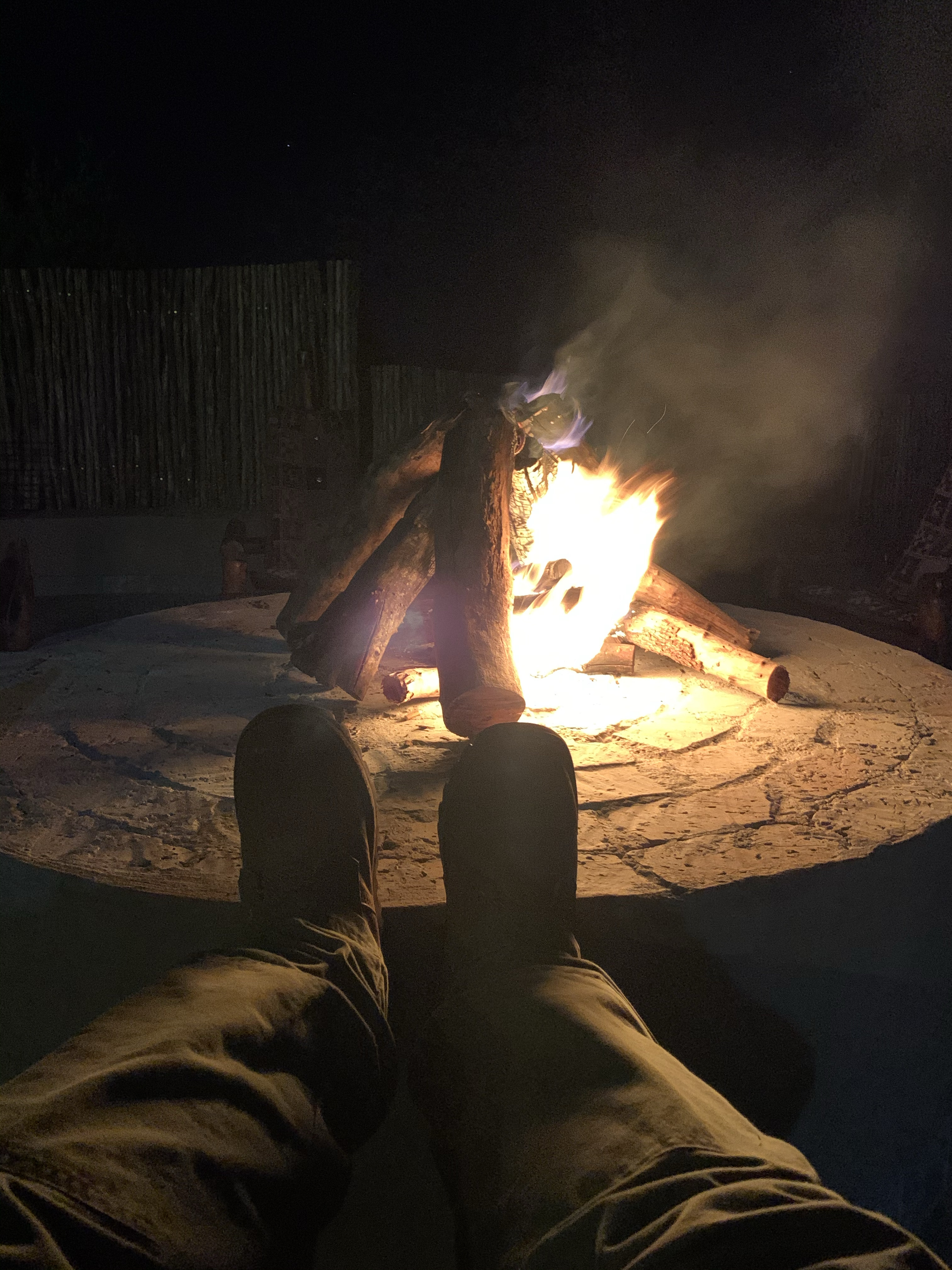 Mark Biggerstaff said:
Will update more as I can. In from days hunt. Now it’s Bush TV time with a dirty cokeView attachment 408019
Click to expand...

A great way to end the day! Only wish I didn’t have so many mosquitoes, then I‘d build one of these TVs in my yard.
Africa on my mind.

Mark Biggerstaff said:
Yes it is exportable just not importable to the USA thanks to our government

. It will be mounted as a rug and euro skull mount and reside in the Bos en Dal Lodge with all its paperwork incase one day while I am still alive it maybe can
Click to expand...

Too bad you can import it into the US. But those memories will live with you for ever, and no one can take that away. Congrats again. Keep it coming.

June 15
Up at usual 5:30 am for me. We left about 7:30 am for a drive to see what we could find. Around mid morning we can across a herd of Zebra and looked them over. There was an old stallion in the herd and he was looking kind of thin. We decided to put a stalk on him. One shot from 375 and he was down where he stood.
Beautiful old Zebra stallion with very few teeth left in his mouth was headed for skinning shed. Going to make a rug with his hide. 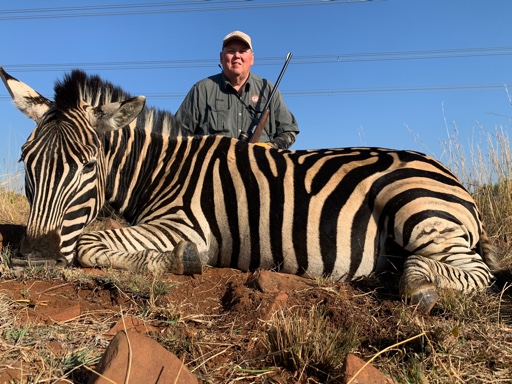 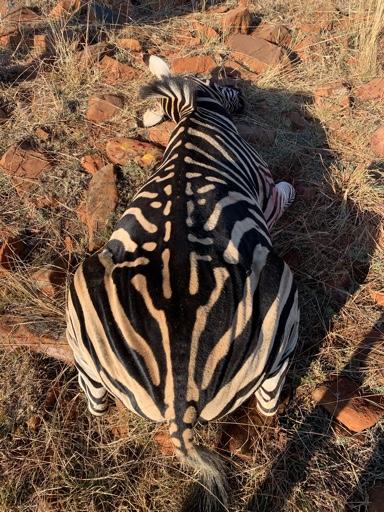 We went and had an early lunch then into town afterwords to get some shotgun shells and other supplies. We have some wing shooting planned for the next day.
You must log in or register to reply here.