SOUTH AFRICA: Another DG Hunt Report With Bushwack Safaris May 2013

Seeing as Theuns and John's are not AH members, i have taken it upon myself and with their consent to post their hunt report on their behalf.

I perhaps have posted these photo's a few weeks ago on AH. Here are the 'hunting parties' hunt report....enjoy!

My grandfather, Chris Coetzer was a big game hunter and hunted several buffaloes in his days, all with a .303, subsequently it became a lifelong dream to follow in his footsteps and hunt the magical and majestic African Cape buffalo.

I have hunted 22 species before deciding that it is time for my own buffalo hunt.... Now it was time for me to stare into those black eyes and settle a primal urge, that urge has pushed generations of hunters to measure their resolve in the face of overwhelming danger.

I suppose that today nothing new can be written about hunting Africa's notorious Cape Buffaloes. Such an awesome and intimidating animal has been hunted for so long, occasionally life-threatening, always exhilarating and with heart-pounding excitement. Buffalo hunting has inspired ink to flow from the pens of many famous African scribes and professional hunters. Somewhere back in time, after it has charged enough hunters and killed more than any other, the African buffalo was deservedly dubbed "Black Death."

This buffalo hunt I was accompanied by John Cowley; a lifelong friend and hunting partner together with Bushwack Safaris, Patrick Reynecke, as PH near Hoedspruit South Africa. This area has a great deal of rough (rugged) terrain, thick heavy brush and lots of buffaloes. We bought a package deal which allowed us to hunt two Buffalo Cows.

Immediately after arrival we ensured the accuracy of our rifles by taking a few target shots. Our epic hunting journey embarked at around 8h00 pm. Initially we located the herd and then started tracking, minutes turned into hours as we remained on the herds spoor. The terrain with its steep hills and scattered rocks took its toll, and soon the hunting party would be breathing and panting, like a pride of lions after a long chase.

On numerous occasions we were able to stalk to within 20m of the herd, but the right animal with right horn length did not present a shot. The smells, noises and atmosphere we experienced while quietly and stealthily melting into the bush were overwhelming. The wind was swirling, and soon we were discovered and the herd would thunder away in a dense dust cloud, signalling that the whole stalk would be started again.

The herd headed to the far corner of the farm and the PH instinctively guided us to a ridge protruding from a dry river bed, about 40metres high, where we awaited the herd to turn back to our direction. There were two options for the Buffalo to follow, either cross the river bed 300metres to the right of us, or 100metres to the left.

The herd came thundering through the dense underbrush of the river bank. I was ready, as the head cow crossed the dry river bed she reduced her speed to a walk and the herd followed her example.

The PH eagerly searched for a hunt- able cow without a calf and with big horns, we only had about 40metres of clearing, the head cow disappeared into the bush on the other side of the dry river bed, we had seconds. At last the call came from the PH; 'last cow of the herd and wait for her to stop'

I realised that within 5 paces she would be in the dense under growth and gone. I had seconds to contemplate, evaluate and take the shot, as she was walking away from us (quartering away).

All my experience came together and I decided in an instance that I had to take the shot at a 120metres, quartering away.

The shot rang out in my ears as the sound echoed of the nearby hills, dead silence! I then heard the familiar 'thud' sound, that sound that only hunters know and I instinctively knew the shot was good! The herd broke off to the right and my buffalo broke ranks and ran left to the dense brush.

We waited about 30minutes before approaching the area we thought she should be in, by now the adrenaline caught up with me and I was shaking like a leaf, unable to light my cigarette. The day I don't get the shaking feeling after a hunt, is the day I stop hunting.

We reached the area we thought she would take cover in, after searching briefly in the immediate area we decided to retrace our steps to where the initial shot were taken. On arriving at the area about 50metres further a clear and definite blood 'spoor' presented itself. The relief of discovering the blood spoor was quickly replaced with the instantaneous realisation that we were now tracking a WOUNDED African Buffalo.

Nothing prepared me for this experience, that cold stiffening sensation, my senses were in over-drive, every noise, every twitch of a leaf, my clearly audible heart beat. I loaded 'Getruida', and seconds later re-loaded her again. I was living my long awaited childhood dream!

We noticed a black figure, barely visible, through the thick undergrowth. She was facing us, ready for us to enter the death circle, instantaneously the guide leapt to the back of the party, I shouldered 'Getruida', heart pounding, the hair on the back of my neck raised and squeezed the trigger. The shot was good, but I was about to meet the African Buffalo'sé¾ fighting spirit.

The trees broke, the bush erupted in noises and then I heard it, the infamous death bellow of a dying buffalo. The sound made me tremble to my core, bellow after bellow, pandemonium broke out in the hunting party as she was still not visible and we couldn't make out if she was charging towards us or away from us. The PH immediately instructed me to flank her from the right, where she just broke through the brush, another shot to the heart took her to ground, bellowing and fighting with raging eyes 10metres from me, we looked into each other's eyes, and I experienced what generations of African hunters must have felt, with extreme exhilaration coupled with overwhelming humbleness, I gave her the final shot.

All the shots fired had hit the vitals, yet it took 45mins and 4 shots to get her down, again proving their infamous spirit. The African Buffalo hunt surpassed my expectations, the hunt was exceptional, the emotions, the turmoil, the conquering of the savage heart and satisfying an age old hunters dream.

John went on to hunt a fantastic one horned cow that made us run one and a half day on her spoor, she eventually took 6 shots to bring her down.

I wish to thank Bushwack Safaris and Patrick Reynecke for an exceptional hunt, the opportunity made me tick a bucket list box. 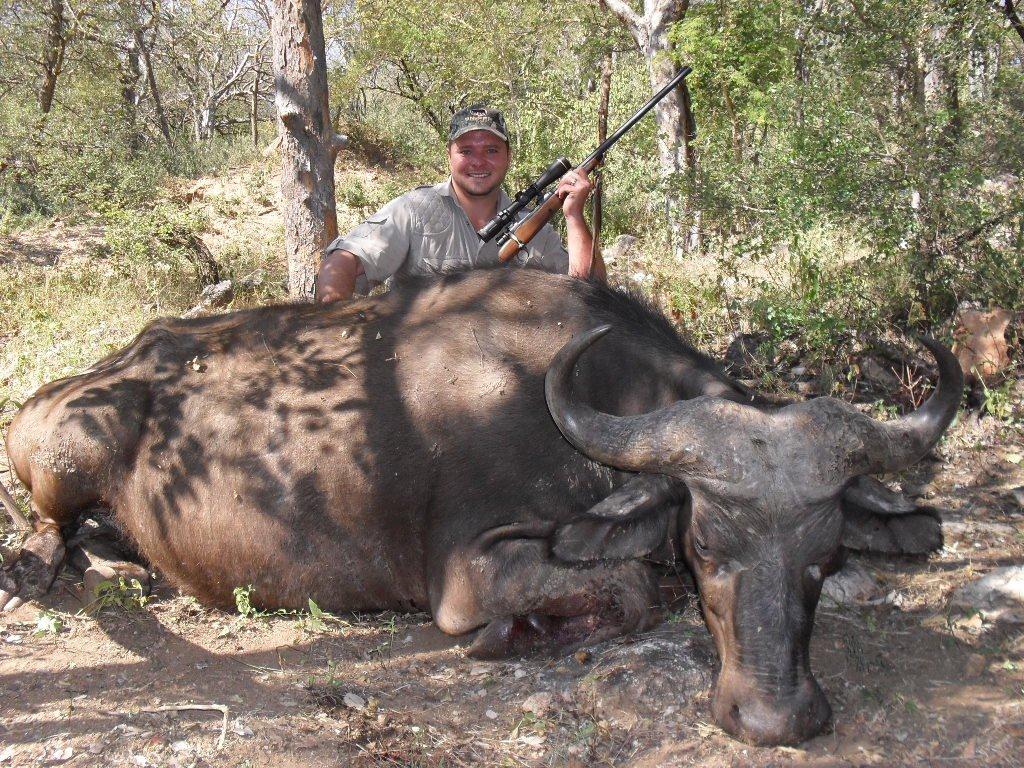 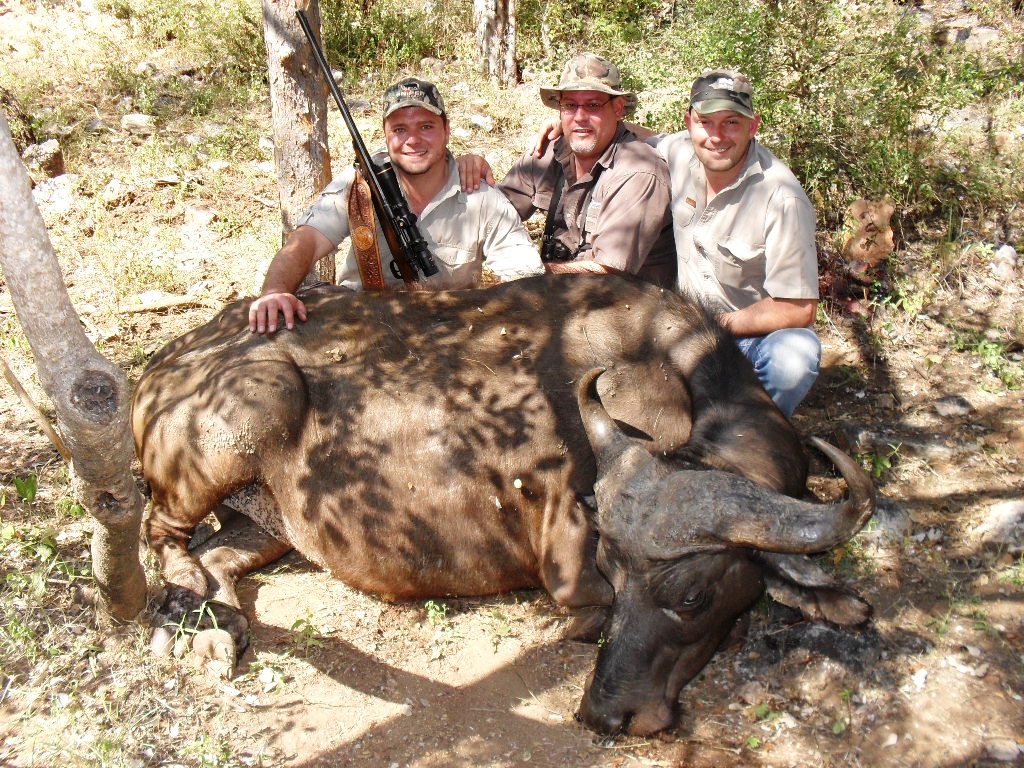 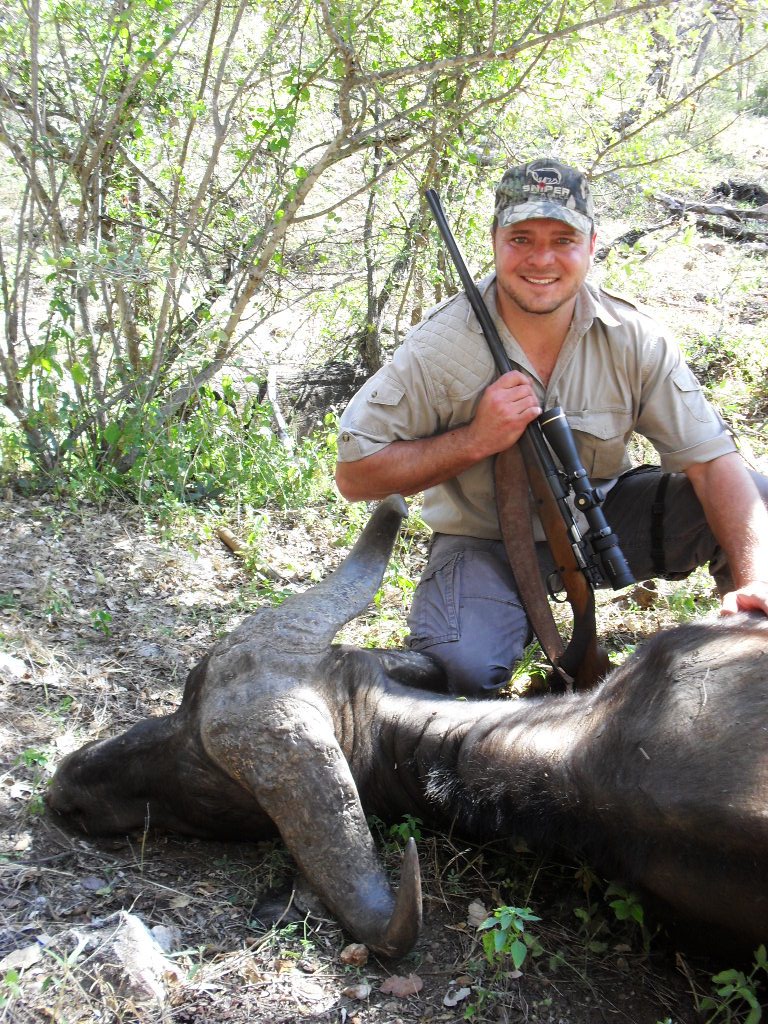 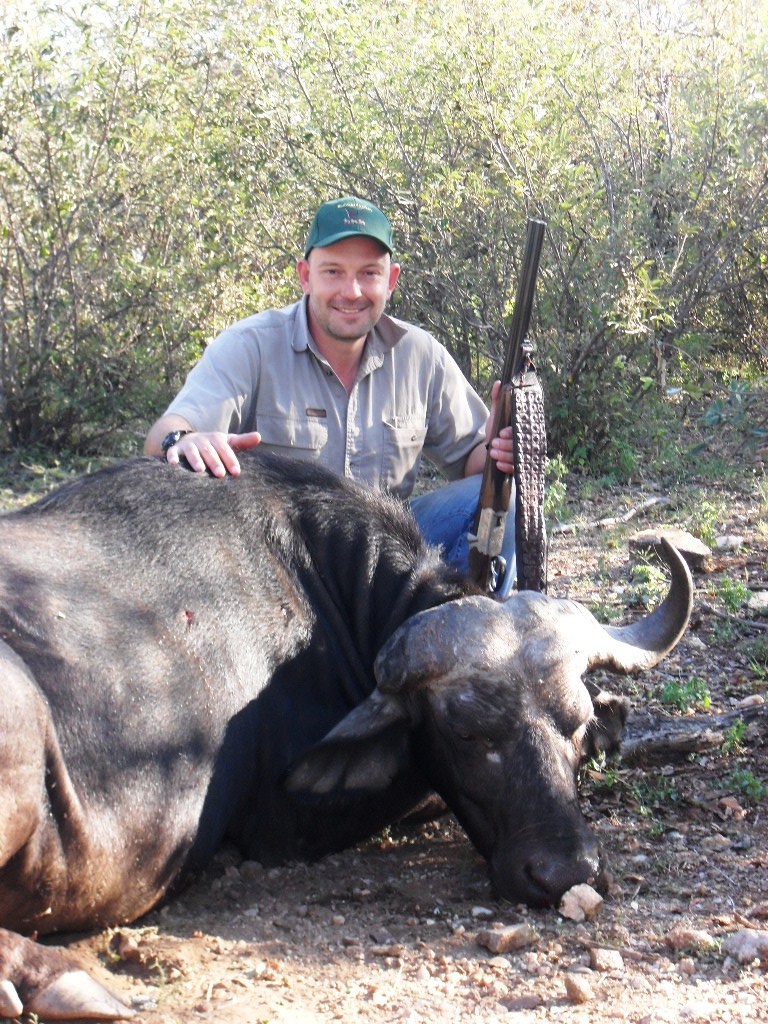 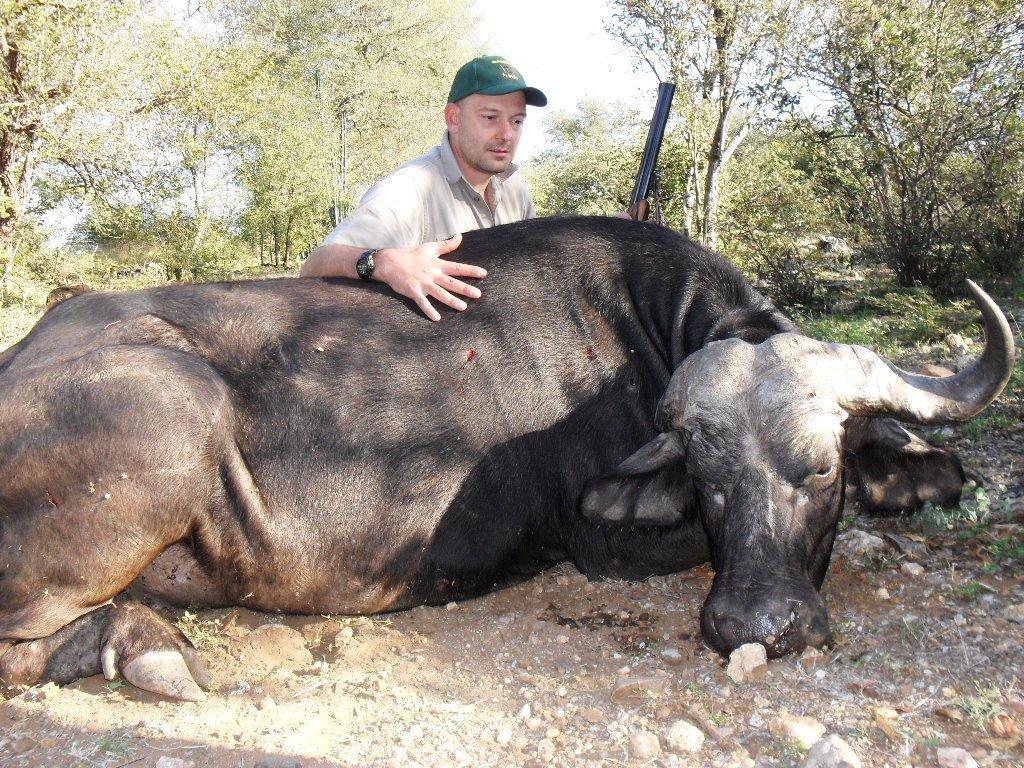 sounds like an exciting hunt
nothing like an upset female , raguardless of the specie
thanks for reinforcing that
congratulations on a great hunt
THE HUNTER; The person that pays over 90% of the cost for the presavation and maintance of wildlife and gets zero credit for it ................

Glad your hunters had a good time in their hunt Patrick.
Congrats.

Congrats to the hunters! Those are some fine trophies thanks for sharing them with us Patrick.
Enjoy Life Now! It has an Expiration Date.

Bobpuckett said:
Congrats to the hunters! Those are some fine trophies thanks for sharing them with us Patrick.
Click to expand...

thanks!!! You must see the video!!! - if only i can load the bloody thing correctly...:throw:
Patrick Reynecke
Think it...dream it...experience it...

Bushwack said:
thanks!!! You must see the video!!! - if only i can load the bloody thing correctly...:throw:
Click to expand...