Hello everyone on the forum! This is my first post as it was my first trip to Africa, first hunt there. I am the friend of Buckdog. Some of you may have read his post earlier. He set the trip up for us with Andri Fox Safaris. I was a stick tight on the hem of Buckdog's pants and rode along on a fantastic trip as well thanks to him.

My first recollection after the long flight was driving through the night with Dog and Andri Fox in the eastern cape. So at midnight I was traded off to the truck of Jacques. As we waited for him we drank a beer and listened to lions ( my first ever ) roaring in the distance and talked about the different constellations from the northern skies. I really was in Africa.

Jacques took me to where I would be based for the next week. The accommodations were opulent to say the least. AC, soaker tub, gentle rain shower, private veranda all around my own... cottage. Don't get me wrong, cottage doesn't do this place justice. It was a first class private stand alone suite. True luxury in a very remote place. Jacques said to meet about 7 am for breakfast.

After a jet lag breakfast we headed out on our first job which was to see how much the airlines messed up old faithful. True to form my Remington 300 win mag was perfect, 2 inches high at 100. From there we set out on our first hunt with Jacques as my ph. Animals were everywhere. I must have had permanent jaw drop at the amount of game being my first trip. I had no clue as to how to judge sizes so I left that up completely to my ph's. When they said shoot, I wasted little time. I am embarrassed to say I missed my first shot at a blesbok. Jacques must have been groaning inwardly but did not miss a beat. After a bit of coaching on the stick setup, we set out again.

That evening he put me on a really nice Black wildebeest. I did make the shot (thank you Jesus!) one shot broke both shoulders. He only made it about 35 yards. 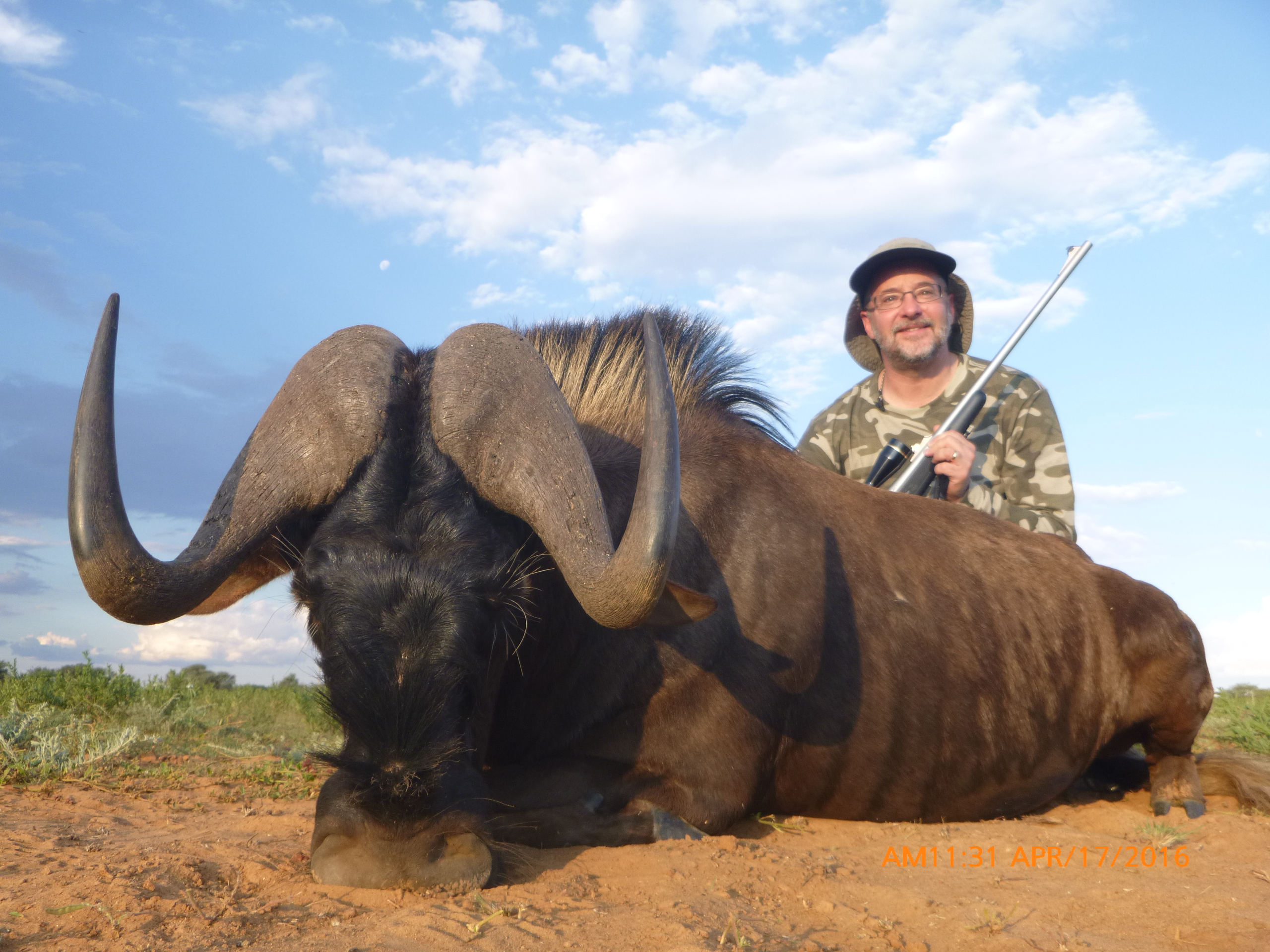 The stink was off me from the miss. That evening Buckdog joined up with me for an evening and we talked about his nice kudu and waterbuck and my nice black wildebeest over some shots of scotch and some beautiful Kentucky bourbon. Unfortunately I was the only one man enough to drink the Bookers which all gathered nicknamed 'Bushman's Ass'.

The next morning Buckdog was SICK! Must have been the Bushman's Ass maybe. So I being the nice best friend that I am stole his ph. I had cox's army with me that morning with Jacques, Andri, a few trackers, maybe 6. We came up to some gemsbok and tracked them for about 1/3 mile before they bedded below some thorn trees. It was 15 minutes before the one we wanted separated and I made the shot. 20 yds later it was over and I had a nice gemsbok. 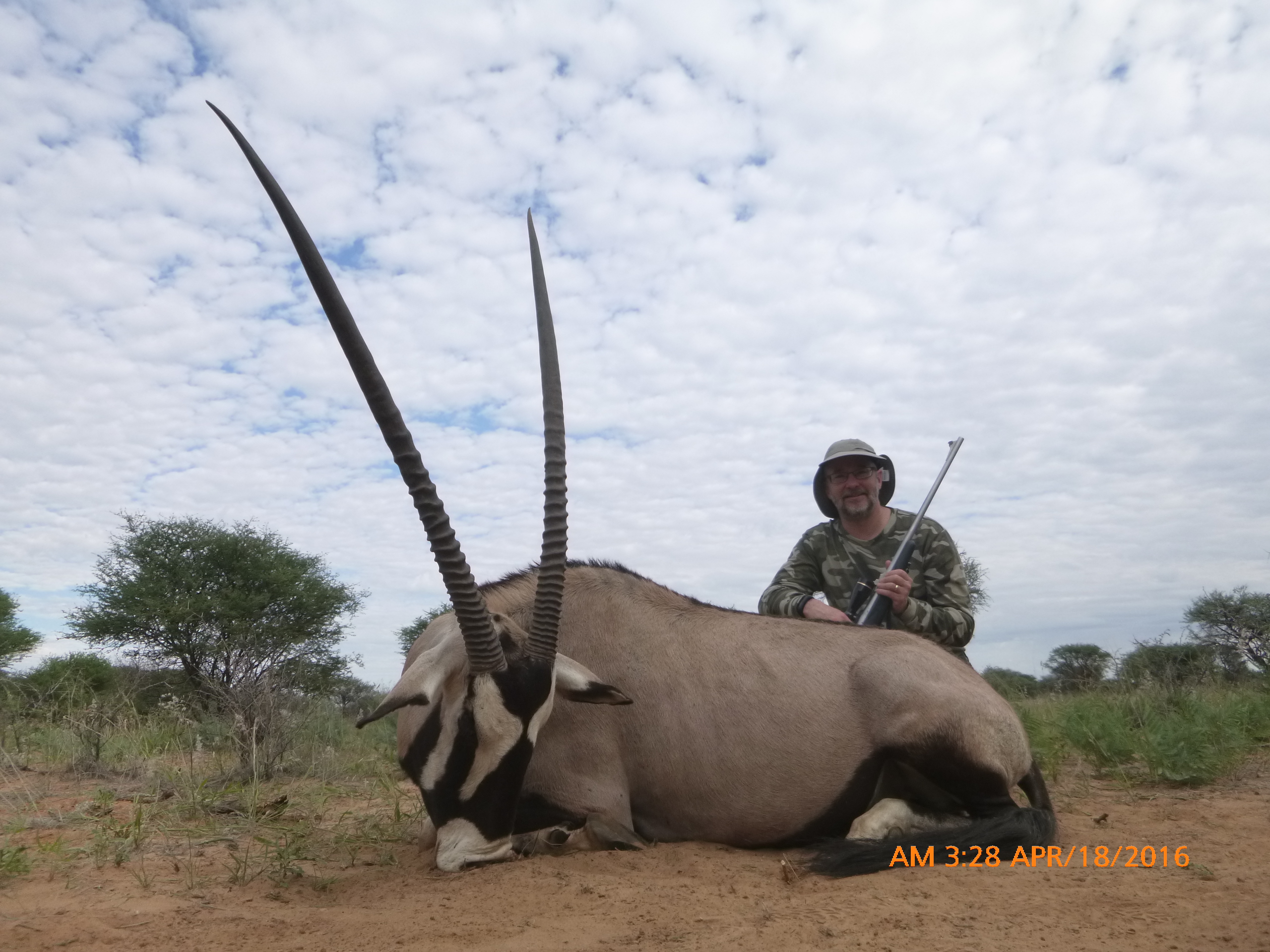 I am not as good with a tape as Buck but he said this is very nice. We loaded it on the truck and went off on further adventures. On the way to the skinning shed, a nice red hartebeest presented. Andri said and I quote, "You must shoot now!" Which I did. 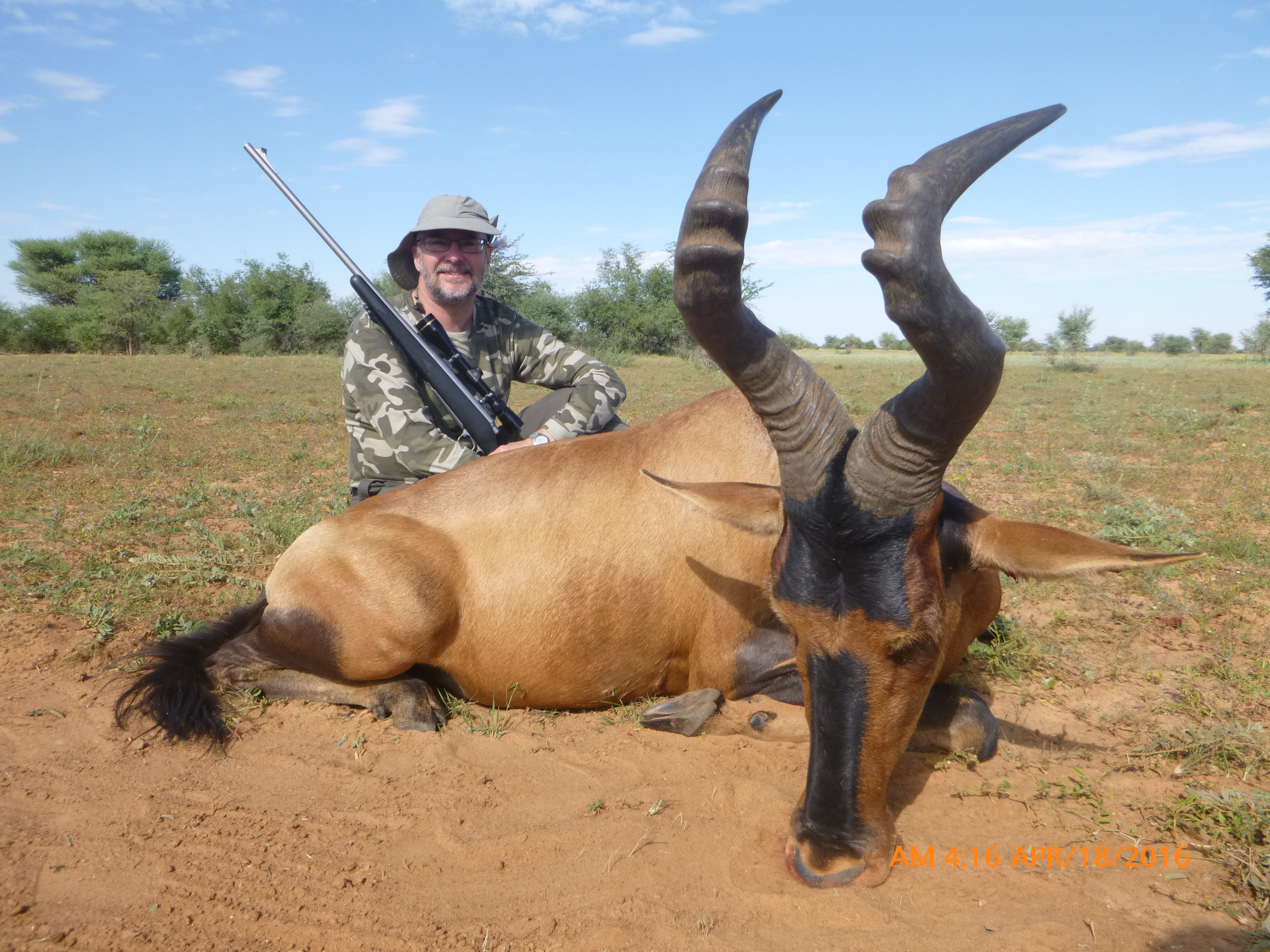 So now I had 2 fine trophies on the bus! And my 2 must haves, the black wildebeest and red hartebeest were in the shed. Dog got healthier. Beans arrived. Life was good.

Beans said that blue wildebeest were born sick and the only thing that makes them healthier was lead. I proved that out. In tracking my blue, we found an buffalo kill and took the skull with us which made a nice photo. Thanks Jacques for help recovering my blue. 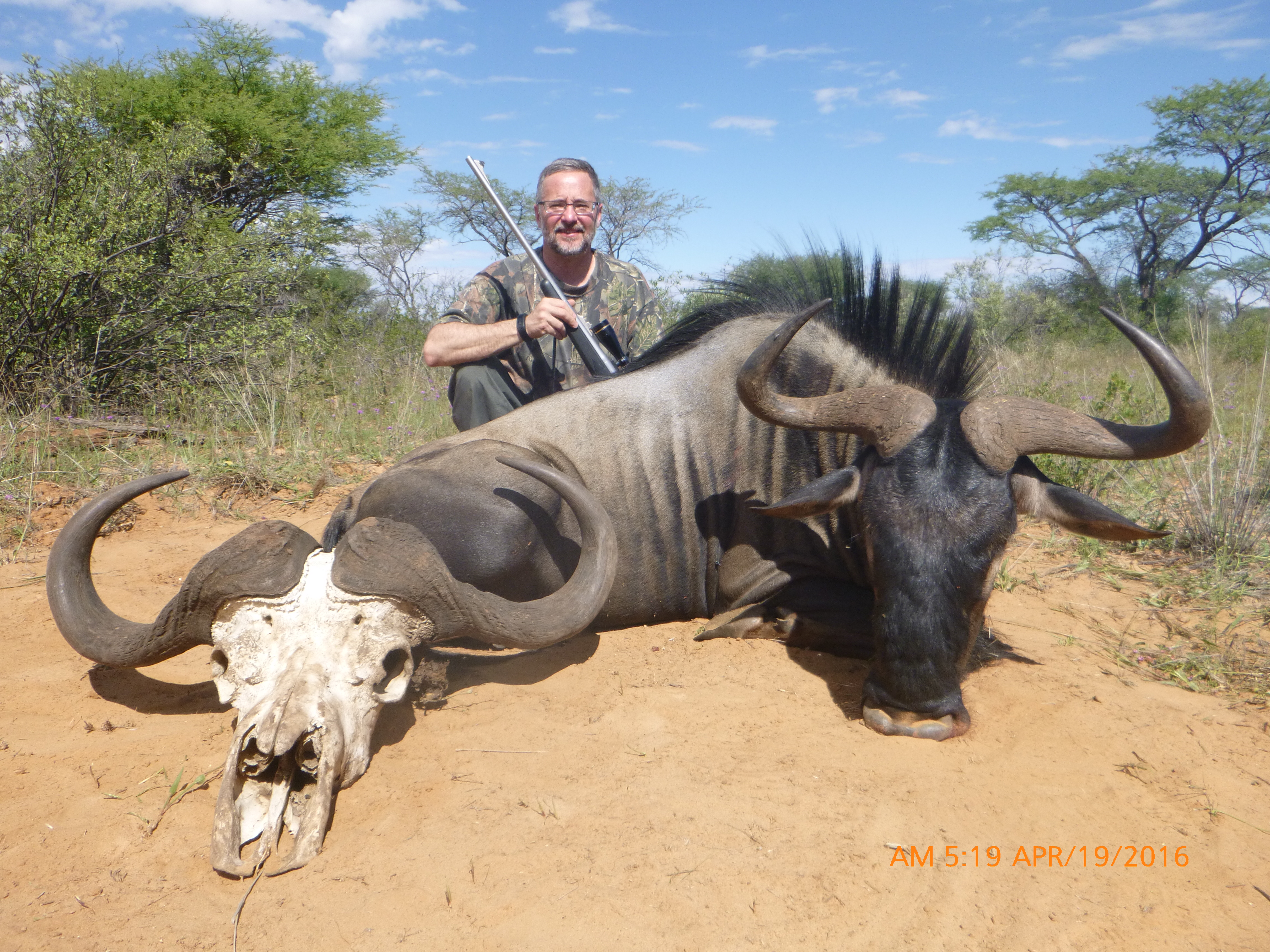 I got an impala and a springbok and blesbok to round out my quota. Now it was on to what-ifs. I had mentioned that I would like to try for a caracal if the opportunity came up. Well right after I got the impala, the Kalahari had a huge all night thunder storm. All the tracks were gone and everything else would be fresh. The scenting would be good for the dogs as well. All day we had a huge posse' out trying to cut a track. Beans and I were on the back of the truck spotting when the call came in. He ordered me to get down and into the front of the truck. He put both trackers in the back and he drove...... flew through the bush.... at 60 mph at least. I still have a picture of the trackers holding the rail of the truck legs flapping out the sides as we took the corners. We got there quick and the cat was treed and we made a quick work of him. Here is the posse' little kid included. 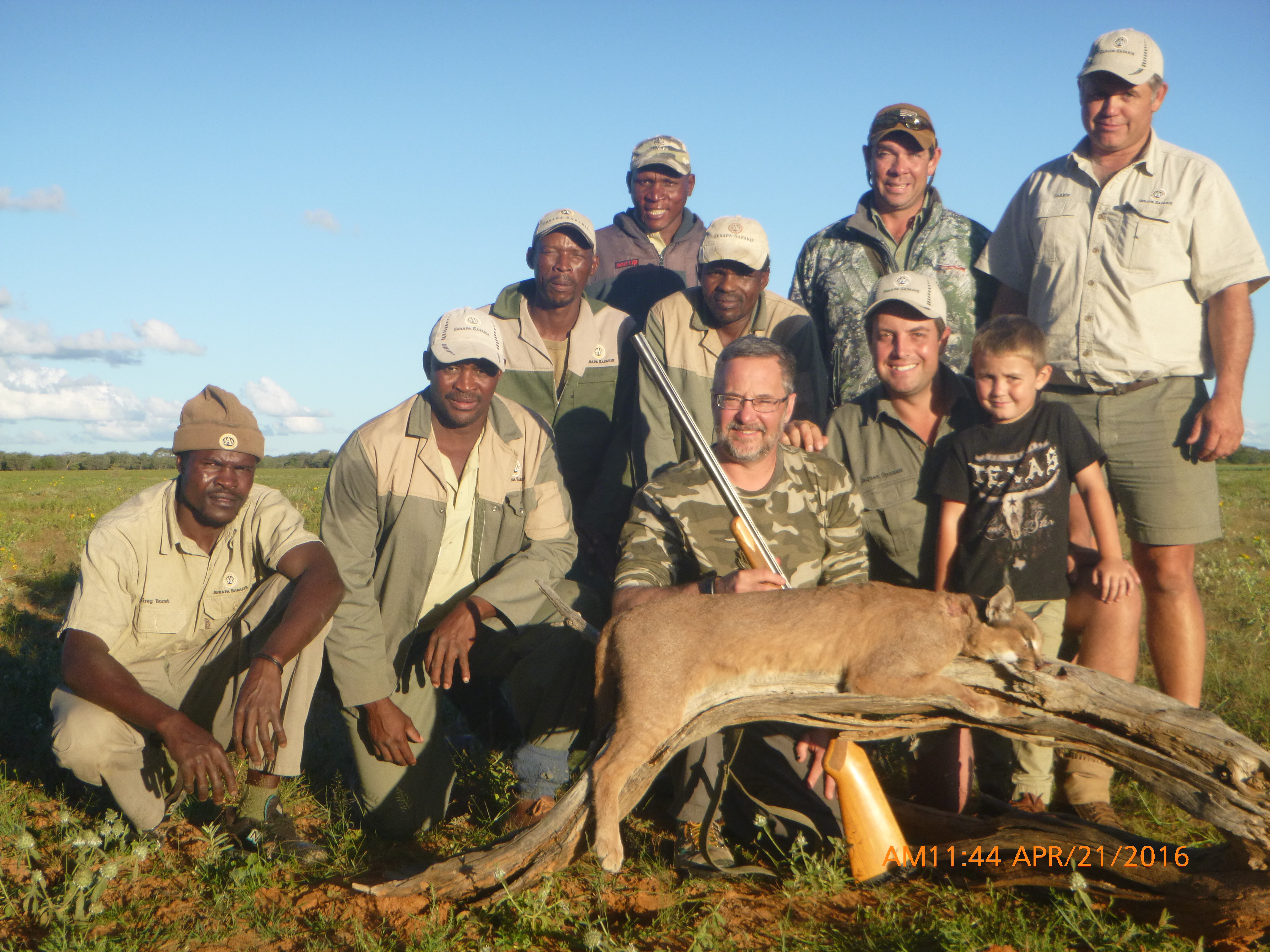 Being almost out of bullets (just kidding, Buckdog was eying up my stash as he lit them up), we headed down to Bean's lodge were we spent 5 very relaxed days and got a couple cape kudu ( picture on Dogs post) and a bushbuck and a spring hare or two to help a farmer rid his field of the critters.

As this is my first post I hope I was not too long winded. I did not know what to expect in an African hunt. I can honestly say that it was way better than I expected. Jacques helped me figure out what to do on this kind of hunt and Beans, the perfect host, answered so many questions. Andri Fox, Thank you so mush for such a fantastic experience. You have added to the few things that are in the permanent memory bank of my life. Here is a big glass of Bushman's Ass to you!!!

Congratulations on your first post, first trip and some great trophies.
Thanks for sharing your story.
There is always room for the long winded here on AH and you are not even close to being in that classification.

You took some great trophies and look to of had a great trip. Jacques is a great Ph and will get you on track even if you have a miss.
Great pictures of your trophies to.

Great post/photos, thanks for sharing.
If there is ever another photo contest here within AH, I recommend that you enter the above picture of your gemsbok, it is quite good or perhaps a bit better than quite good.
The hartebeest is also very well posed and taken for that matter (lighting, background, sky, etc.).
I would submit them both in the event of any future contest.

Great post/photos, thanks for sharing.
If there is ever another photo contest here within AH, I recommend that you enter the above picture of your gemsbok, it is quite good or perhaps a bit better than quite good.
The hartebeest is also very well posed and taken for that matter (lighting, background, sky, etc.).
I would submit them both in the event of any future contest.

Thanks Velo Dog, but I can not claim credit except for my dazzling smile. The PH's took the photos and all did a great job of it. I agree great photos.

esau,
lets go kill more next year! andri certainly lined us up with super PH people in Tilley, Jacques, Beans, Jon and Andri was with me 24/7 all working hard for and helping us to be successful. Guys thank you all.
E

The impala was much prettier.
Here are both. 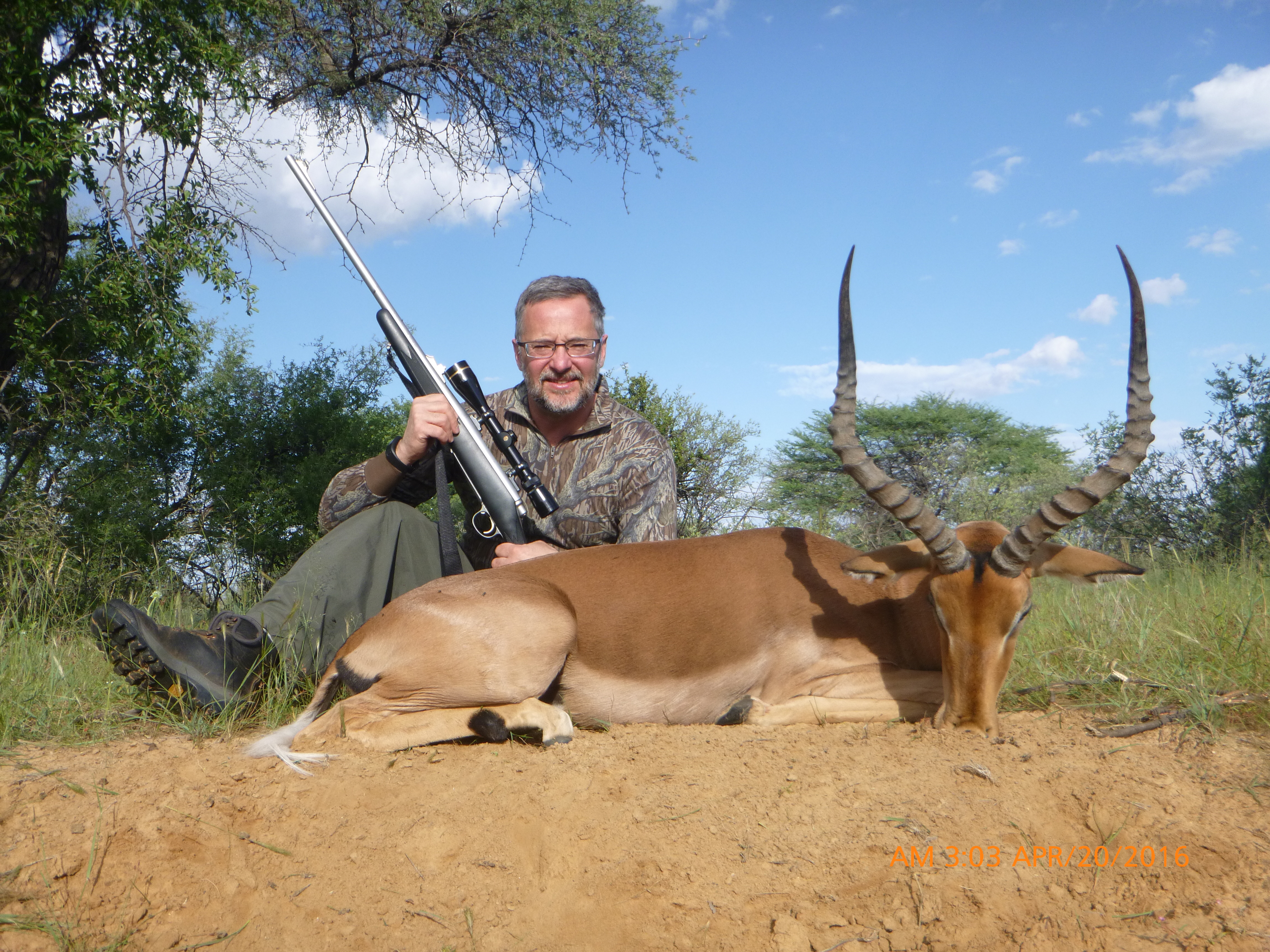 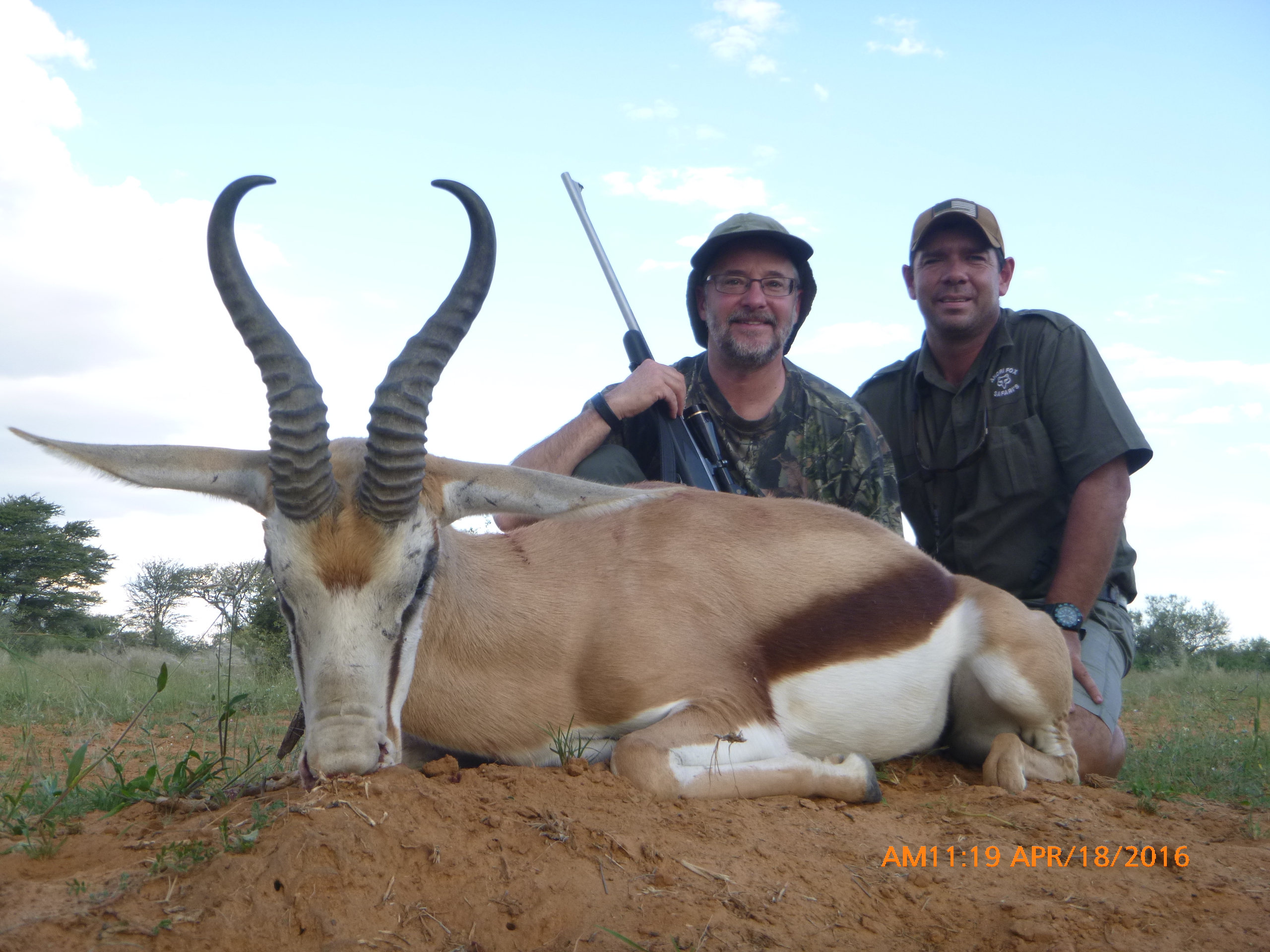 Buckdog said:
esau,
lets go kill more next year! andri certainly lined us up with super PH people in Tilley, Jacques, Beans, Jon and Andri was with me 24/7 all working hard for and helping us to be successful. Guys thank you all.
Click to expand...

Almost like they knew us already and what we each would like. and the amount of animals and quality could not be beat. My taxidermist is salivating to get these into the states. I know you had your eye on that buffalo! he will be bigger next year

Thanks for joining and sharing your hunt with us. You have some very nice trophies. Better than average in many cases. Congrats on a great hunt. Bruce

People can describe the amount of game all they want, but until you see it for yourself....

When is the next trip?
HUNTERS make importation bans work!

No slow start with you

Congratulations on your hunt and welcome to AH! That's a really nice gemsbok! Thanks for sharing your story with us.

Congrats, that is an excellent crew. I had the absolute honor of hunting with Andri and he and Beans have done more for me than I will ever be able to repay in ten lifetimes. I'm very glad you had a great time.
FYI there is a reason that stuff is called bushmans ass

Thanks for the report.
And here I am, returning to Africa of many faces;.... the sloe-eyed temptress with flowers in her hair who stole my youth and my heart, and left me an old man with a kaleidoscope of conflicting memories of many dashed hopes and some fulfilled dreams. E. Echols

All pictures are very nice. Definitely an experienced photographer!
E

People can describe the amount of game all they want, but until you see it for yourself....

If Andri were free and I had the money (wife is an accountant and squeaky tight), I would go tomorrow!
You must log in or register to reply here.

I've rejoined Ah after a year break. Jerome has helped me re: set up my signature and banner. In my absence, I see there's a new resources page. How do I go about building a page and adding client reviews to it. I see a lot of other outfitters have got a text section, followed by pics and videos, and lastly some reviews. I'd like to do something similar.

Thanks for your help