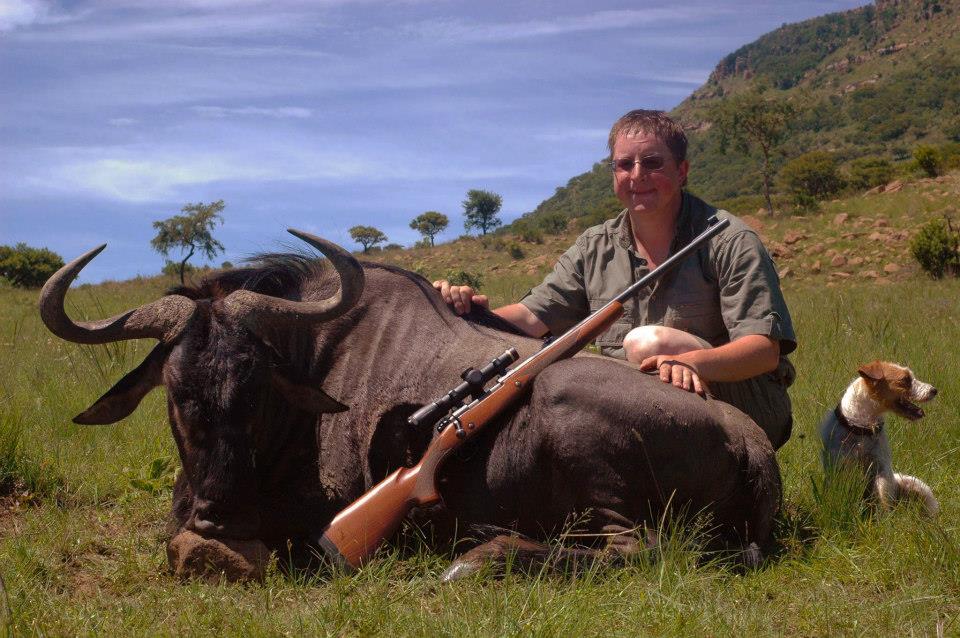 This past January my friend Alex Stenvers and I hunted Chris Gunther of Aloe Africa Hunting Safaris. People may ask why the summer months? Answer was that being college students this was our winter break here in the States. We arrived in the evening of the first of January after spending a excellent New Years eve in St. Lucia.
Chris greated us at the entrance to the property and showed us to the lodge. He gave us our own cabin to stay in while hunting with him. We settled in for a while and Chris arrived again a bit later and we drove down to the rifle range. With only hunting 4 days with Chris was the plan because we had other places to see also. We didn't bring our own rifles on this trip. Alex was most comfortable with the 3-06 and shot it well. I choose the .375 H & H. I owned my own, before trading it off on two longbows. After getting a good feel with the rifles; Chris gave a brief tour small part of the estate. We saw eland, zebra, blesbok, kudu, and nyala. During our evening drive just before dark. Arriving back at the lodge, Annelise (Chris's wife) and Seven her assisant had a fire and dinner going. We enjoyed a beer and waited for our dinner to be served. Chris cooked our meat part of our meal right on the coals of the fire we had been sitting around enjoying. It was real treat he even had kudu steak as a appetizer for is to enjoy before the main meal. After dinner we once again enjoyed the fire, converstation, and watching wildlife as the came in to the waterhole near camp. It was time for bed and get some sleep.
Chris arrived early at our lodge and after nice breakfast we headed over mountian to the more open savanna part of the property to hunt blesbok and cow wildebeest was our plan. Alex was after a blesbok ram and we spotted a herd of them down bellow is in open grassy valley. We began a stalk and walk a good mile or so to get to them. With us very close to the herd Chris and Alex continued. While the tracker/ skinner and Baggie and I stayed back out of site. They got close and Alex made a good shot and the ram was down. After photos and handshakes we put the ram in the shade and contiued after my wildebeast cow or that was the plan. We spotted a herd of cows and calves in the distance. After a long walk across the grassy and brush covered plain we made our way to the herd. Chris and I snuck forward while our Alex and Baggie stayed back. We sorted through the herd trying to find a dry cow to cull. We found a cull, but gods of the hunt had something else planned. A trophy blue wildebeest bull appeared in the back of the herd in the thick thorny brush. The wind shifted and they spooked before I could take a shot on a cull cow. So walking back to the rest of our party Chris and I both were excited in seeing the bull. My friend and hunting companion Alex came up to me and said "It's your birthday in three days, Go after the bull, I will make up the difference" he told me. So we pursued the herd and now the bull was our goal. They headed into thick patch of trees and brush. So Alex, Chris and I set up ambush for the herd. While Baggie went into the thicket to push them out. They didn't appear, so Chris had us head for higher ground hoping to find the herd which he was thinking was headed for water at one of the dams. As worked our way up the rise along a brushy draw out of the corner of my eye I spotted a wildebeest cow in the underbrush to the left of us about 100 yards away. We went into stalk mode and snuck up to a rocky out cropping. Chris and I crawled up among the rocks trying to get into position for a shot. I rested the rifle across my ball cap and waited. It was the same herd, same number of cows and calves. The bull we could see back in the brush. He just didn't come out offering a shot. I lay waiting and the sun began to cook me. So Chris told me to move slightly next a large aloe plant. It provided shade and it was blessing. We lay waiting and the bull still didn't come out. Then out of the corner of my eye a rock went flying from Chris's hand and his jack russel terrier chased it. His terriers hunt with you the whole time and the female made luck go in our favor. The bull came out of the brush to see the small dog. Here was my chance, he stopped at 70 yards and was facing me. I put the crosshairs in the center of his chest and squezzed the trigger. My shot was center and the bull took off with the herd for about 150 yards and he went down. All of us waited for the rest of the herd to go and slowly they left. After they left and we approached my first African trophy. He was a beautiful bull and I was satisfied with the experience.
We hunted a few more days and took several more trophies apiece. If you are looking for a good African experience at a fair price look up Aloe Africa Hunting Safaris.
Nate Meek
P.S. message me for more info I am Chris's USA booking agent

Thank you for sharing longbow! Congrats on your hunt!

January would be on the warm side...

I see Aloe has prices in Rand's and USD.

I too checked out the web site and must say the prices are very very low! Makes me want to jump a plane and go right now!

I too looked it over and yes the prices are extremely reasonable. It looks attractive overall. Ranch size is about 7500 acres, not huge but adequate. I didn't notice whether it stated about fencing though, I didn't see any in the pix I looked at. How is the eland hunting Longbow?

WOW a 375 for two long bows Hey want to buy the golden gate bridge? lol Thanks for sharing looks like you had a good time.
Enjoy Life Now! It has an Expiration Date.

Congrats on your hunt, and thanks for sharing !
L

The eland is excellent didn't take one on this trip but saw some nice bulls on the property. Also forgot to mention is that Chris has 80,000 acres of concessions under his management on the surrounding lands.