I have been to Limpopo and Zambia previously, and I have never been satisfied with my shooting, so I thought a cull hunt would be a great experience.

I saw a posting on another website for a cull hunt for twenty animals. It was five trophy and fifteen culls for Springbuck, Impala, Blesbuck, Mtn. Reedbuck and warthogs. I did not care about the trophies. I could not figure out how to work in my schedule, but my wife suggested that I add it on to the end of our Vic Falls trip – saving airfare money and a few days of travel.

Sometime before the hunt, Nick contacted me and asked if I was open to having other hunters in camp. Which of course I do not mind, but especially since they were in the Army I was fine with it.

I didn’t know what to expect of a cull hunt. I saw once on TV where someone had a portable shooting bench, and the TV made it look like shoot and stack them up. I got the impression that it was a “lesser” form of hunting which turned out to be the same as hunting anywhere else except for you have multiple tags, and your “trophy” has different characteristics.

We hunted by getting on the high ground and glassing and stalking. Stalking down a valley when bush was thick; Setting up on a high point looking for a shot or having the trackers conduct a drive for us.
The weather was 30-40 degrees cooler than Vic Falls. You could see for miles on the open terrain which contained valleys, hills, and draws. 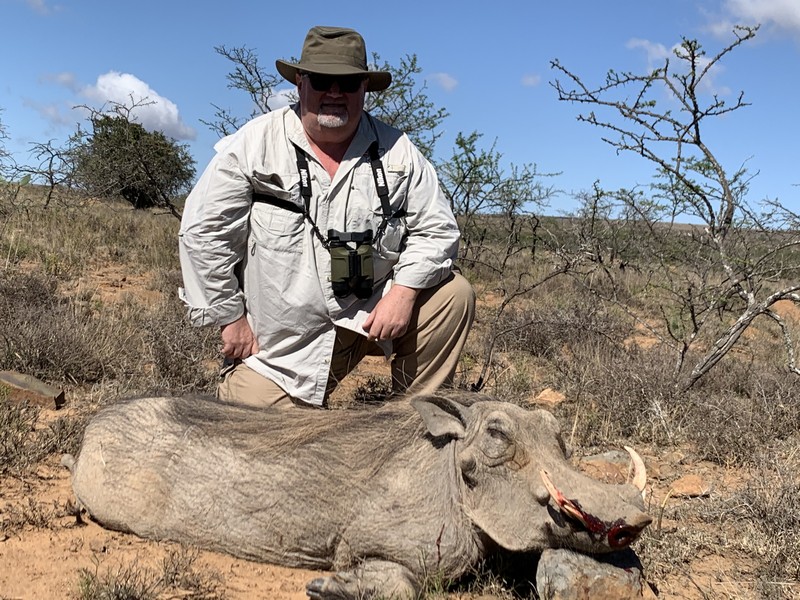 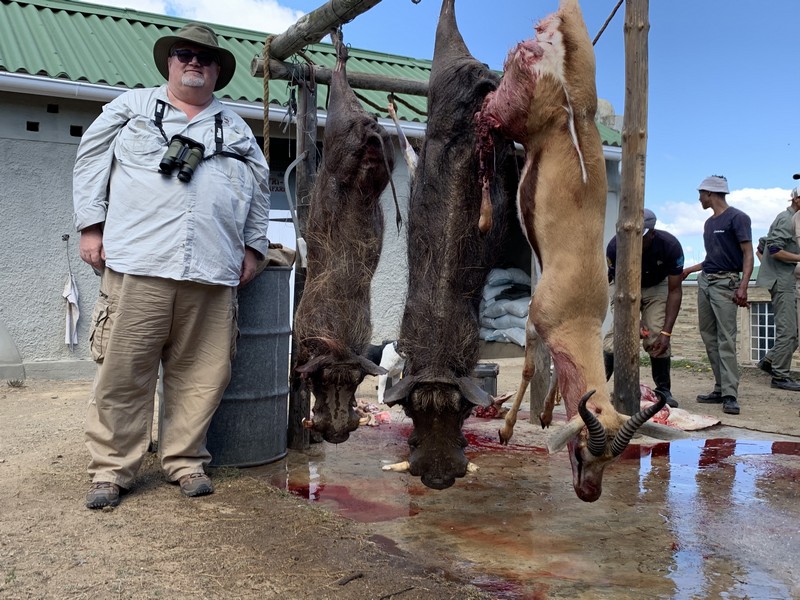 I can not share every stalk because so many stalks were unsuccessful: animals spooking at 400+ yards; Some days, we had so much wind I could not get stable on the sticks.
So I will share some of the highlights of the hunts.

One chilly morning we sat in a valley ( I did not bring a jacket, so I had three shirts on) with three rims of the valley six to seven hundred yards away. The wind was gusting too much, and the sticks were impractical. So we got prone on an earthen dam above the vegetation.

You could see a dust cloud where the 75 to 100 springbuck and fifty or so blesbuck were running. The animals were an impressive sight as they came over the rim of the valley. We waited until they drifted down into range and stopped running. I have no idea why these animals were running. I think they ran more than they stopped.

Nick told me to shoot a Blesbuck outside of the herd. There was a very strong crosswind. Nick told me to aim almost to the butt of the Blesbuck in front of it. I’m guessing 18-24 inch gap between the two animals. Nick set the range on the scope, and when I fired, the buck dropped in his tracks. Nick said it was at 357 yards. I thanked Nick for the guidance on the wind, and he thanked me for listening to him because most hunters he said would second guess him. We finished that morning by shooting two other Blesbucks from the prone position. 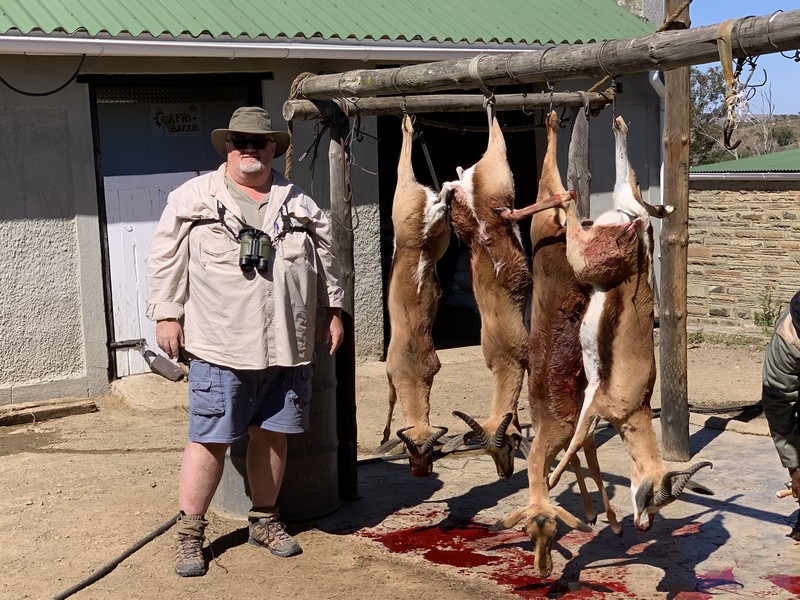 Previously in Zambia my PH Charlie Harvey talked about hunting being freedom. I really felt that freedom on this trip. It was a state of innerpeace and tranquility. All I thought about was the hunt: didn’t worry about bills, or family or business. Actually all I did was hunt, shoot, eat and sleep. 

On another occasion, we were on some high ground, and the sticks were not stable enough with the wind. The ground was covered with large rectangular stones with sharp edges- larger than bricks. I proceeded to get into a sitting position – uncomfortable and Nick built up stones for me to have a better rest. I shot an Impala at 281 yards, and it ran about twenty yards into the brush. The trackers and dogs went around to drive it out of the brush or see if it is dead. The Impala shot from the brush as I was about to put a shot into him I see the long-legged Jack Russel terrier in my scope by the name of Blackjack. Blackjack grabbed hold of the nose of that impala and was wrestling him, stirring up a cloud of dust. Blackjack wrestled him only a minute or so, but it was enough to wring the life out of the impala. There were a few occasions where I wish I had a phone Scope or filmed the hunt. Blackjack wrestled a total of five animals for me during that week.

While out and about hunting, we saw a herd of Sables. There was a male about 44-45”. He looked phenomenal, and he is all I could think of for the next day. I did not want to turn this into a trophy hunt because I would want to take more home than just the Sable. I could not stop thinking of him until I saw a Nyala.

On our way to another area to glass, we saw a one-horned Nyala of which I stopped and took some pictures. On our return trip the nyala was still there. According to Nick, for over ten years he has been messing with people. People would see his one horn and get excited and then turn disappointing when they saw the other horn was missing. Nick mentioned that he was probably at least fifteen years old and would not make it another year. I asked Nick and agreed to us hunting it the next morning.

Of course, returning to the area the next morning, there was no signed of Nyala. We spent the morning glassing and stalking with no success. We returned and saw him in the afternoon. I set up on the sticks, but he never stopped running. We went back up on the high ground and stalked down to the area we saw him go into. He was visible through a break in the brush. There was a wire sheep fence between us. I know probability the odds of hitting a wire may be slim, but I hit a wire previously, so did not want to take a chance. The only thing I fear is the Internal revenue service and shooting through brush or wire fence.
We decided we would work our way closer and the other side of the wire fence. In the open, some cow Nyala spooked, and that was the end of the hunt for that evening.

We went back out in force the next morning. One PH and a hunter were hunting for a trophy Nyala further down the Nyala Valley as I called it. Another PH and hunter who was done and out scouting for both of us. Needless to say, we did not see the one-horned Nyala, but Clinton the other hunter took a nice Nyala. We did not expect to see him again. 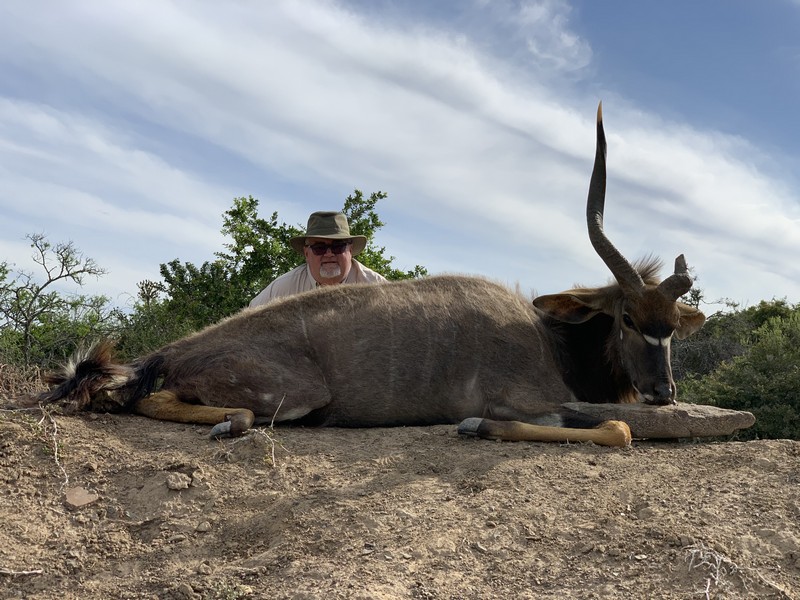 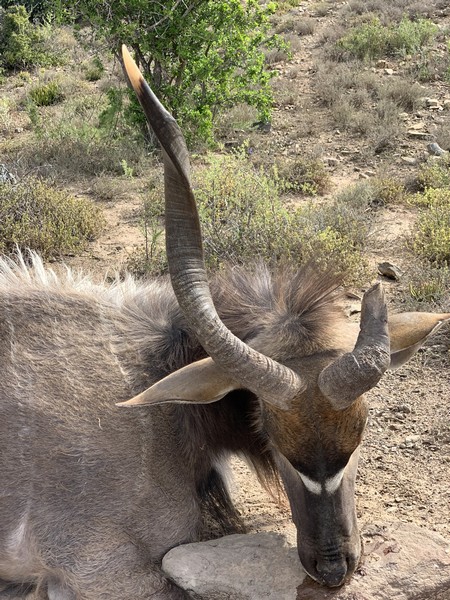 We went back out in the afternoon, and there he was standing 323 yards away in the open. I set up on the hood of the truck fired, and he ran ten yards — a great conclusion to some wonderful hunts.


Data.
• Shots
o Shots Fired: 41
o Misses 10
 Most of my misses were slightly high, especially over 500 yards. I am guessing that I am still breathing.
o Number of Animals Shot:30 ( Can purchase extra animals)
o Number of Animals shot twice: 1
o Animals wounded and not found: 1 tracker and dogs tracked for 2 miles; rejoined the herd
o Trackers had to finish off three animals

Nick had phenomenal eye sites and able to locate animals without his 10 x 42 Swarovski’s binoculars. He was a personable, knowledgeable PH with patience to put up with my lying hunting stories.

I don’t know if everyone does this, but I play a game and try to find an animal before the PH. I think he finds 99/100, but it is a small thrill to see one before he does.

Nicks family homestead from the 1800s with many additions was our base camp. The bedroom was large and comfortable, and I think we all had our own bathrooms. Water was hot and water pressure great.

The food was great and plentiful — no shortage of beverages. Hospitality was superb. Equipment was in great shape including a brand new Land Cruiser that I cringed every time the Acacia thorns scratched the paint
I am looking to go back and due to this hunt again with a couple of buddies if not by myself again. 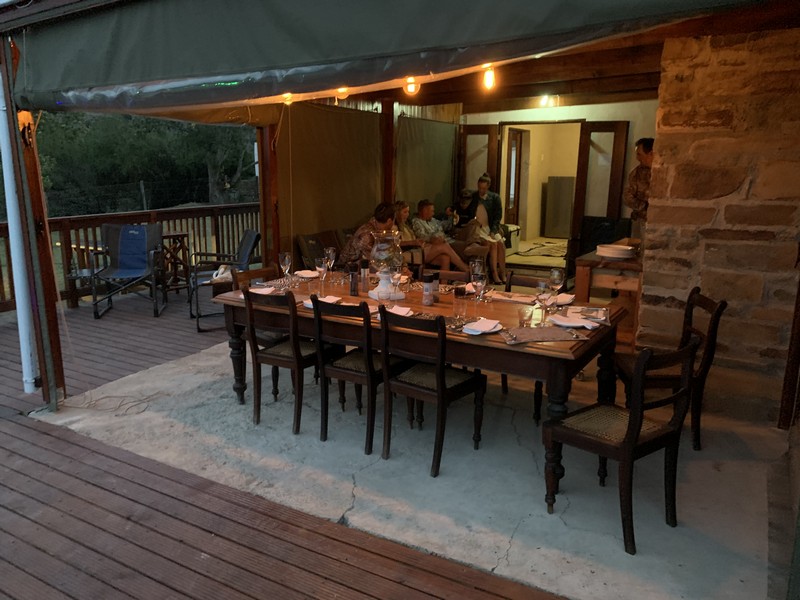 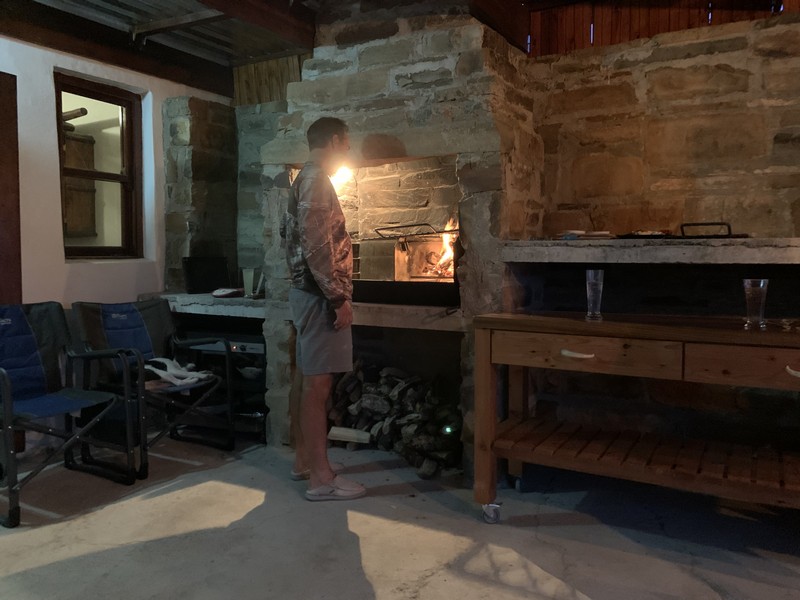 Singleshot, I really enjoyed your write-up. Appreciated your stats on distances fired at game especially. I'll be with Nick beginning of July 2020.

Sounds like you had more long range shots than what most people have in the Limpopo. Congrats.
Bruce
You must log in or register to reply here.