As a follow up of my report with Shona, I will now do a report on Wintershoek Safaris.

I arrived at Kimberly airport 2 hours late as my plane was delayed. I was met my Johnie Viviar and my PH Donz. Cleared the rifles and was asked we could drive to Gamagara lodge that night, instead of staying in Kimberly. We arrived at the lodge 11:30 and got settled in. We got up late the next morning, sighted the rifles in and srove around getting to know the area. It was very cold and windy, so not a lot of game.

Next morning it was cold and windy but we did spot a Roan which we stalked to no avail. We spent the afternoon driving and spotting. We saw a few Tsessebbe but nothing really worth shooting.

Day 3 started out bitter cold i was wrapped up in a blanket in the back of the truck. We spotted a couple of nice Sable, did a stalk but didn't get a shot. By the afternoon it had warmed up a lot, a Roan had been spotted by 1 of the water holes. We went there and started tracking, spotted it and stalked for about 75 yards. Shot it at about 75 yards, it went 15 yards and was dead when we arrived. 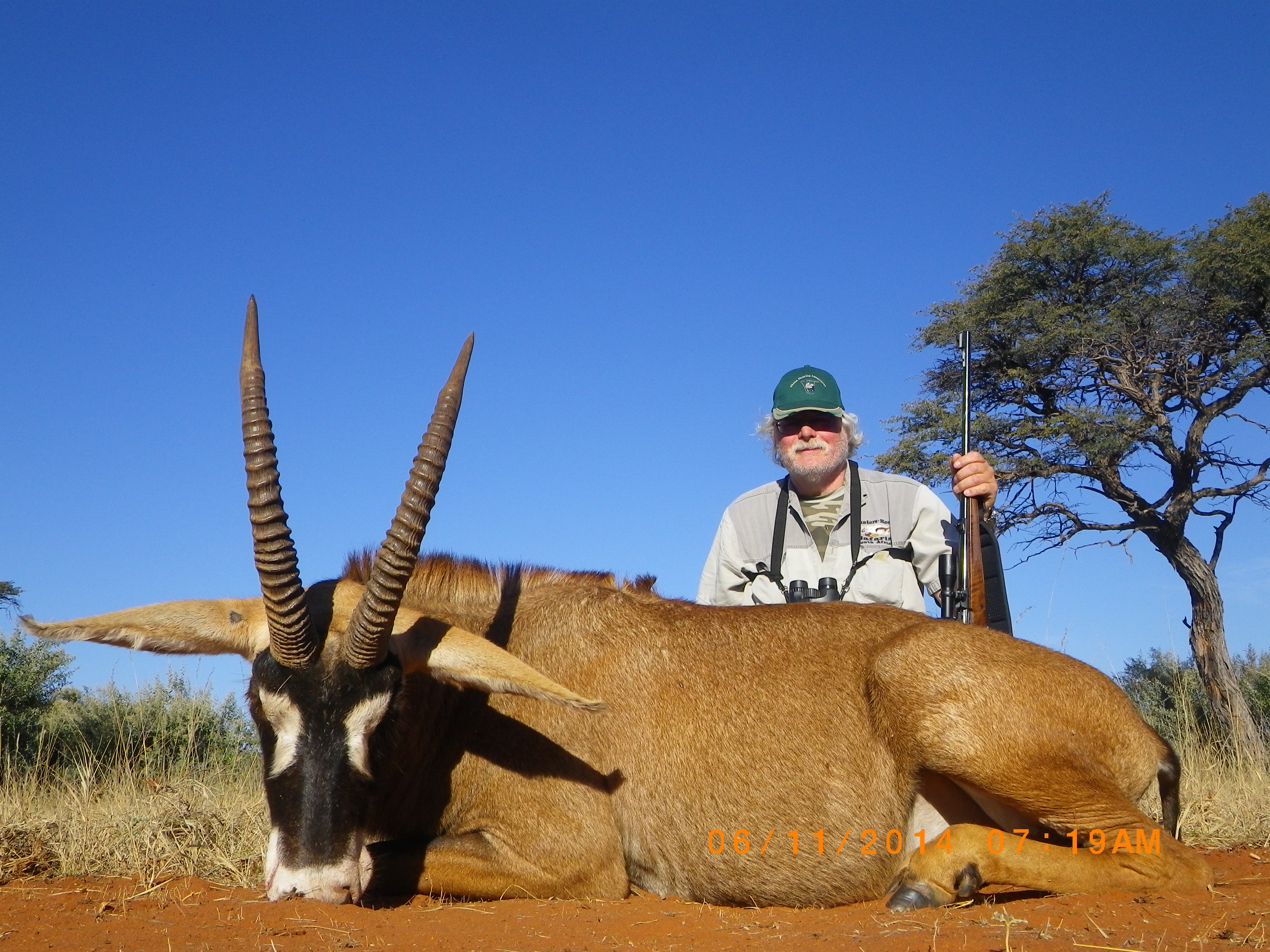 Day 4 a lot warmer today after Sable, we spotted a herd stalked but no luck. we walked in to a water and spotted a lone bull. I shot it as it was quartering away and it went down. as we where walking to it he got up and started walking away, I tried a Texas heart shot an he turn and kept walking, I then put a 3rd shot into him and he went 10 yards and went down. went we got to him he was unable to get up but was trying to horn us. I gave him a final shot and it was over. I am truly amazed at how tough Sables are the first shot was a good ond into the lungs and he refused to go down. A remarkable animal. 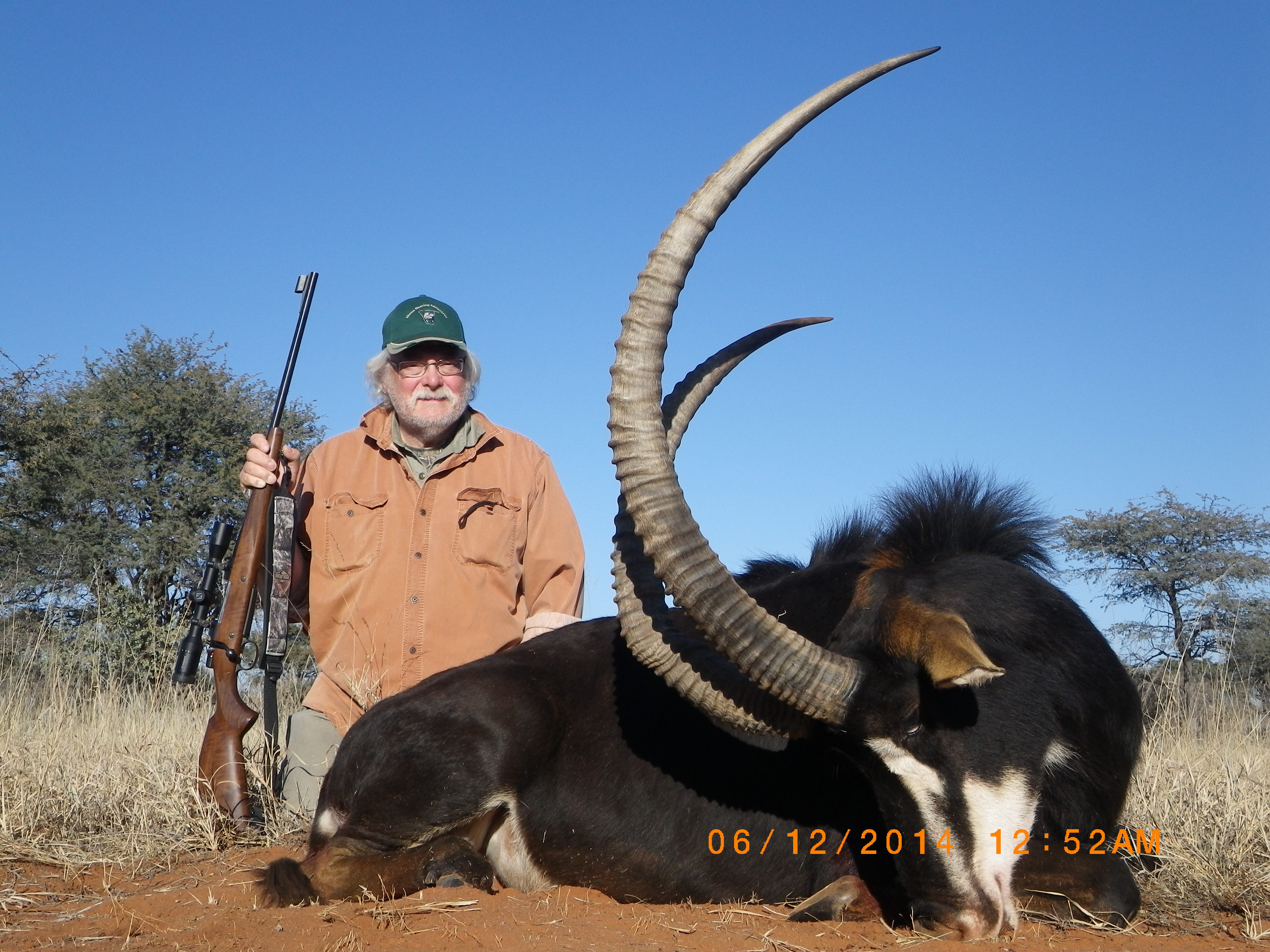 Day 5 Tried for Tsessebbe But found only small ones, as my PH new that there was some big ones at Winterhoek, and we where going there the next day decide not to look for any more. They have Bontebok at Gamagara aand as they are on my bucket list i decided to hunt these instead. We went out in the afternoon spotted some and did a stalk all small. We spotted 3 coming up from a bunch of trees and got behind a bush and waited for them. Shot one at 75 yards. 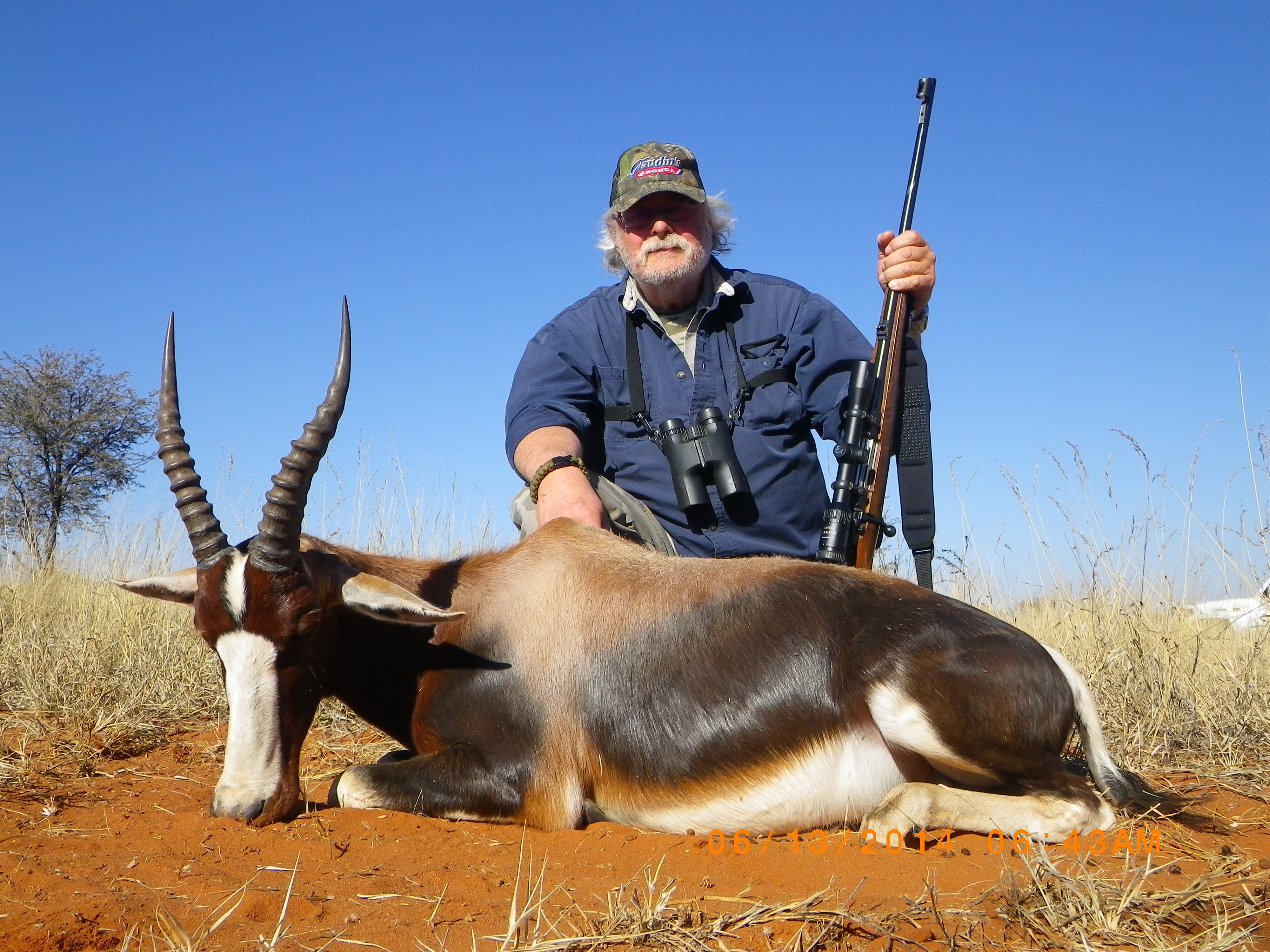 Day 5 drove from Gamagara to Wintershoek, had lunch and went out after Tsessbbe. Spent 2 hours kopje hopping and glassing saw lots of game but no big Tsessbbe. we got back to the truck and started driving when we spotted 3 about 400 yards await. got out and circled around behind a kopje. climbed up and spotted them. stalked closer. PH said we must shoot the middle one, on my range finder it was 175 yards, and light was fading. I had a fairly steady rest so decided to try. on the shoy all 3 ran off, but we heard the bullet strike. I knew i had a good shot so we watched them 3 went behind a bush but only 2 came out. We went looking for it and the PH and i walked right by it and had gone 159 yards past when the tracker called us back. 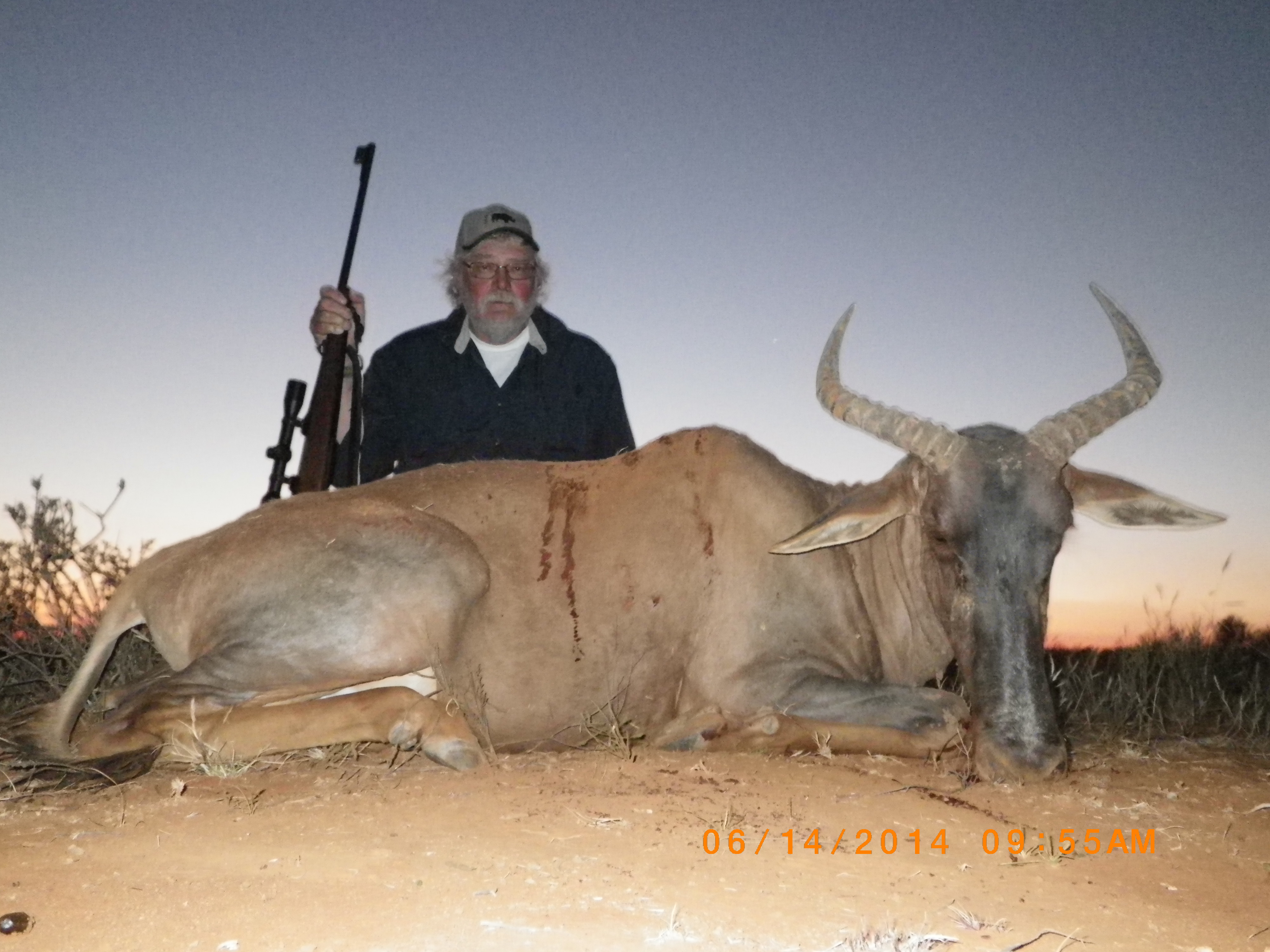 Day 7 last day and only Nyala left on the list, after breakfast drove to an area to hills and valleys. got out of the truck and started climbing and glassing. after about 1 hour and 20 minutes saw one half way up a hill facing us, a very nice old bull got on the sticks and the PH said if he turns he will be running. Aimed for the centre of the chest and shot, and he took off. went to where he had been and found blood followed for a ways and he was heading down hill. we found spoots of blood so called the other tracker. The pH and I started downhill while the tracker was working out the track. We spotted a Nyala about the same size and walking slow, he looked right at us and I had my rifle up, the PH said its not the one. we looked up the slope at the trackers and one pointed to a clump of tress below us. as we approached a Nyala jumped up and ran. The PH fought it was the right one, we followed and after 50 yards he was laying there and not moving much, put a shot into the heart. And it was the right one. I asked the PH about the other Nyala we had seen and why it was acting the why it was, he figured it may have been blind. The one I got was a very old bull with his teeth worn down to the gums. 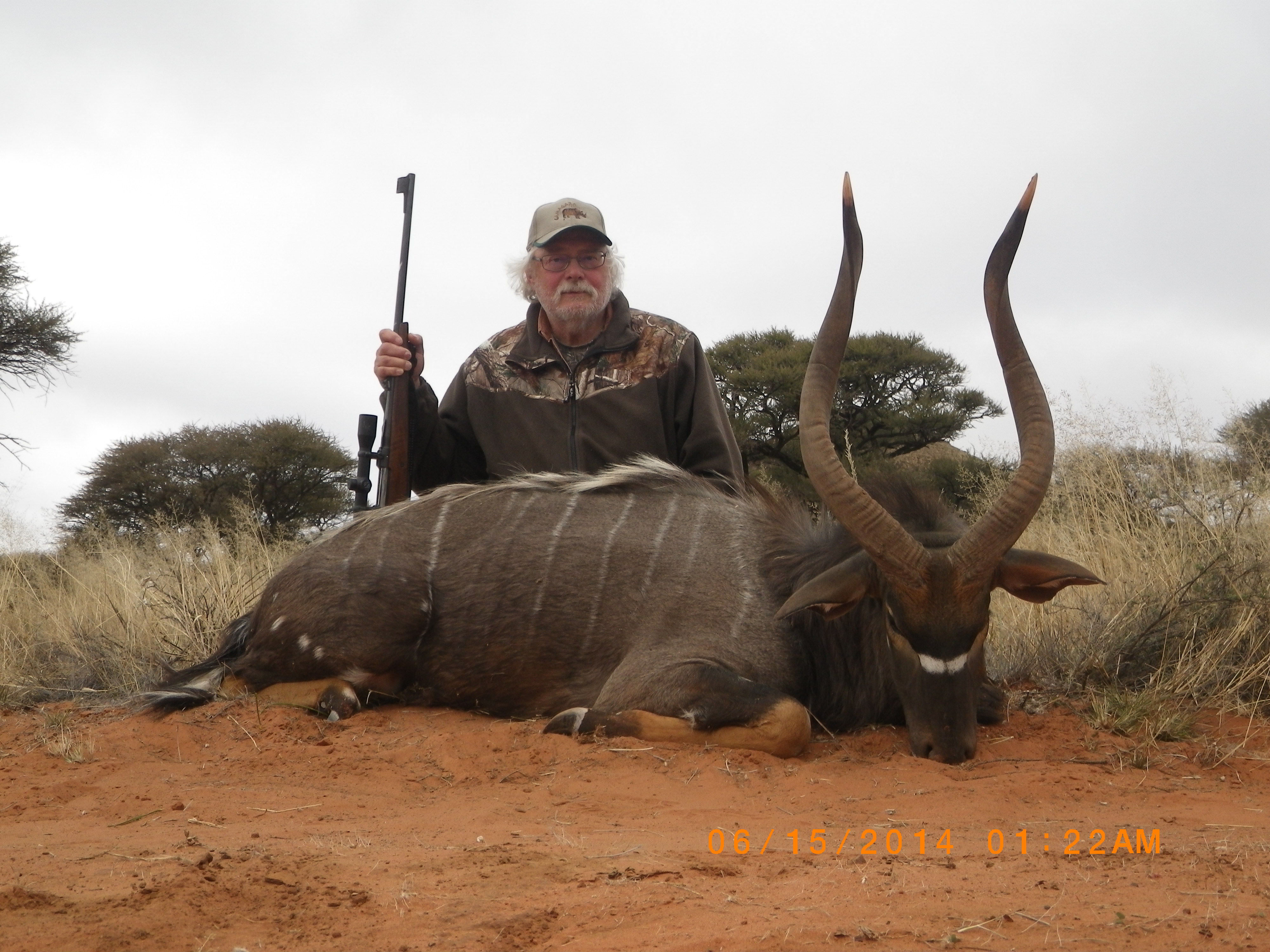 So concludes my 2014 African adventure, I apologize to Donz if I spelt his name wrong. he was a very good PH and likes to be off the truck to do his hunting, so you do lots of walking which is also the way I like to hunt.

I would like to thank both Shona and Wintershoek for a very enjoyable time in Africa, they went out of their way to make my time there a very good memory. I would recommend either outfit to anyone that wants to hunt Africa
Last edited by a moderator: Jun 21, 2014

That is a great set of trophies you managed to get.

Wow did you have a dream trip of a hunt.Both trips seemed to have been first class and with some great trophys. Great report

Some great trophies and good shooting. Love the mass on the Nyala. Sable looks like he has some good length. Is he over 40 inches? Sounds like a trip you'll remember for a long time. Congrats Bruce

Great report both on Shona and JVW!

Congrats, your trophy room is going to look really nice! All nice trophies!

It looks like you got some of the more unique SA animals. Congrats and thanks for sharing the photos and story.
And here I am, returning to Africa of many faces;.... the sloe-eyed temptress with flowers in her hair who stole my youth and my heart, and left me an old man with a kaleidoscope of conflicting memories of many dashed hopes and some fulfilled dreams. E. Echols

way to go spooks ,
you will be hard pressed to top this trip ,fella .
love your sable , tessebe ,and bontebok .
thank you once again ,for sharing your memories ,with one and all .....
THE HUNTER; The person that pays over 90% of the cost for the presavation and maintance of wildlife and gets zero credit for it ................

Bluey I still have a wish list of Scimitar Horned Oryx, Red Lewche, coloured variant Springbok and Coloured variant Blesbok as well as leopard and a Caprive Buffalo. And if I can ever afford it a Bongo

Awesome Hunt Congrats on some fine trophies and thanks for sharing!
Enjoy Life Now! It has an Expiration Date.

Nice trophies, Spooksar, congrats !
You must log in or register to reply here.