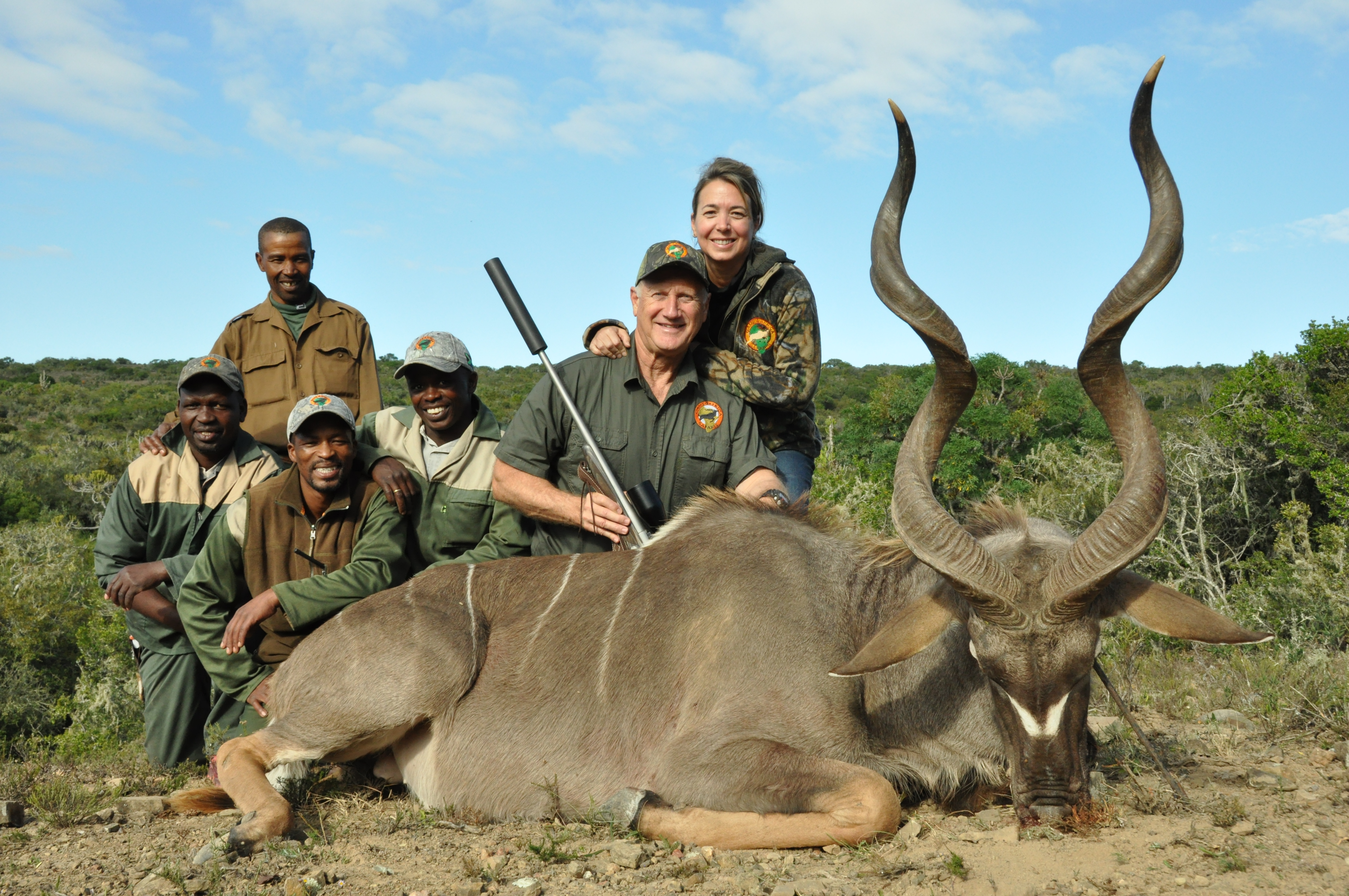 Our arrival at Kudu Ridge Lodge on Saturday June 4 after our PH, Wikus Coetzee, picked us up from the Port Elizabeth airport following our all night trip from Lagos, Nigeria.


Sunday June 5
After some much welcome sleep, we’re off early the next morning to look for my Kudu. As it turns out, their reputation as the “Grey Ghost” is well deserved! He was the challenge that I expected and more as I finally get my first shot at what turns out to be a fantastic Kudu Bull from 280 yards! Although it’s not a one shot kill, with a little help from Diesel, we’re able to quickly track him down and finish him. It wasn’t my best effort but I’ll take it nevertheless. It’s by far my longest shot on the African continent and my first Kudu! 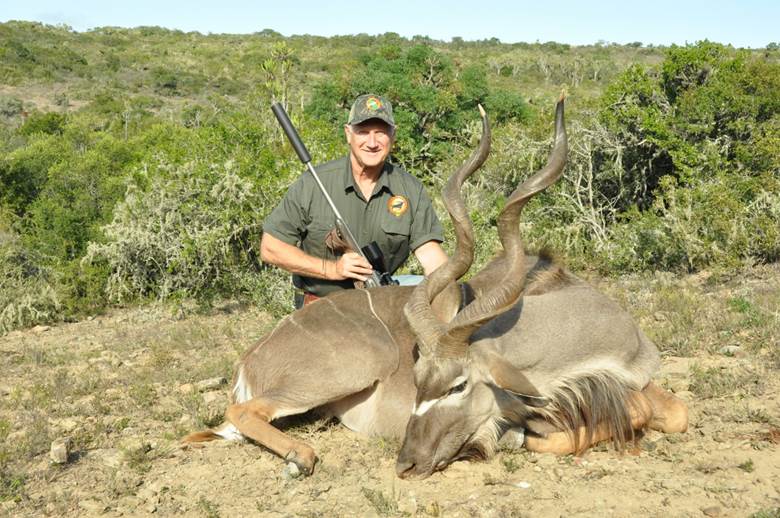 It’s late the next morning when I get a little closer shot at a Burchell’s Zebra just before noon from about 150 yards. Diesel came to the rescue again and found him about 100 yards away in the brush. Problem is, he lay down in the shade and forgot to check back in with us! 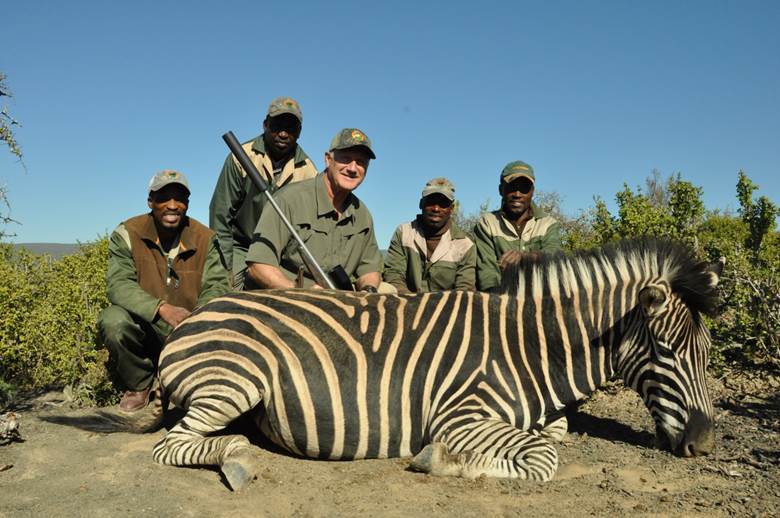 Turned out the day wasn’t over yet. Later that afternoon, we were able to get within 175 yards of a very nice Waterbuck. He ran about 100 yards before he went down. The boys managed to get him loaded just as the sun was going down. 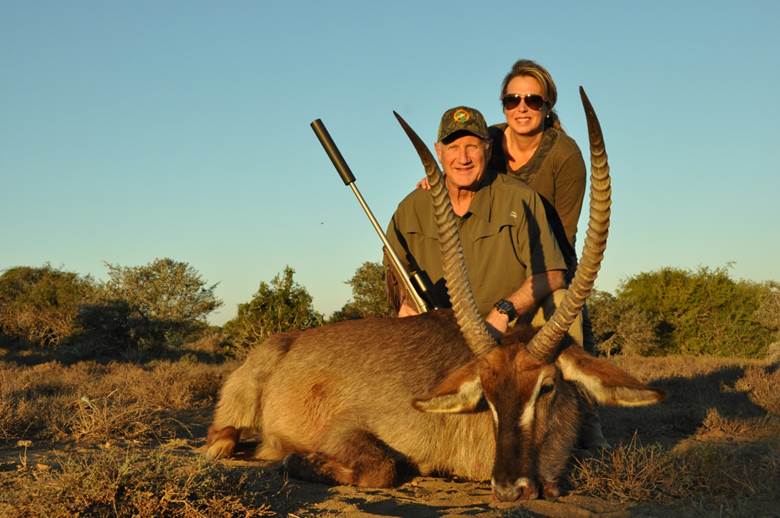 The next morning, we were off looking for Nyala. I didn’t have to wait long as Wik spotted one on a ridge warming himself in the early morning sun on the far canyon wall about 220 yards away. As we’re downwind and in the sun, I have time to get set up and make the shot without rushing. He only goes a few steps before going down. However, it’s a long trip in the Bakkie around to the other side of the canyon to collect him! 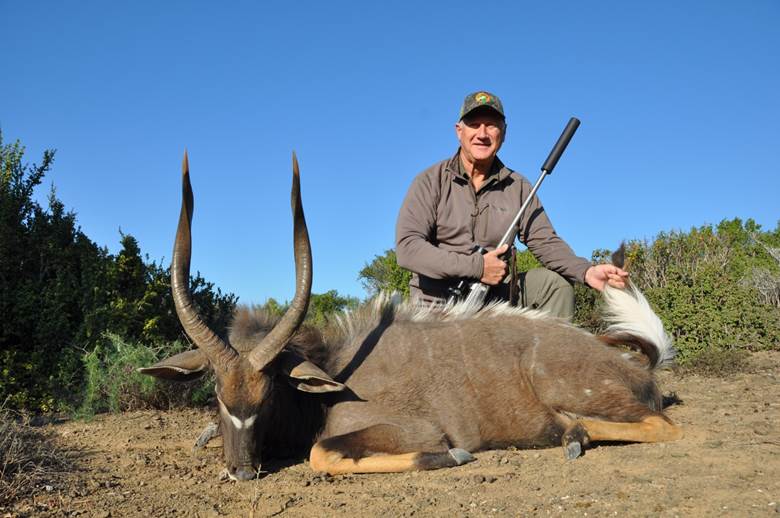 I had planned to take that afternoon off from hunting and let Wik take Shari and I on a leisurely game drive since I had bagged the first 4 trophies on my “wish list” in only 2 ½ days. BUT we spotted a very large Hartebeest and I had a change of harte. It was my best shot of the hunt at 175 yards. He fell almost in his tracks. 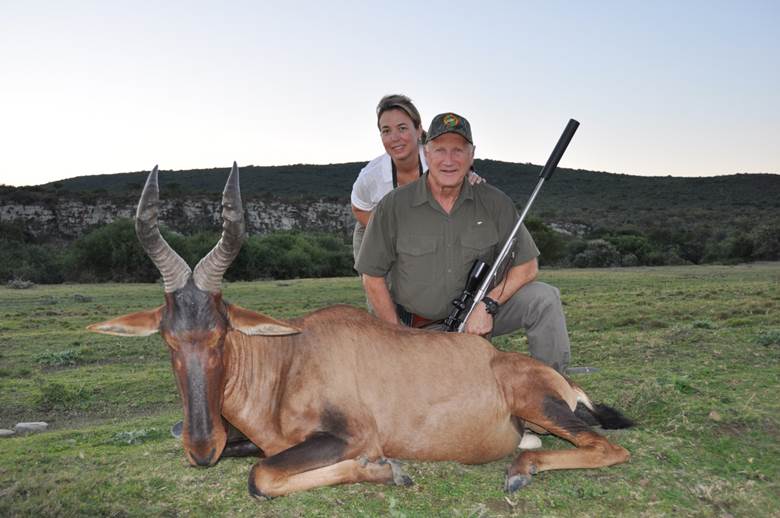 After taking Wednesday off for a sightseeing trip to the coast, we were back in hunting form on Thursday. I had so much fun chasing my first Kudu, I just had to do it again. We finally spotted one later that morning that didn’t spot us first and after a long, careful, tedious stalk, we were able to work our way to within 220 yards of this old bull. This time I took him cleanly and didn’t need Diesel’s help. However, much like the first, we found ourselves with quite the challenge of getting him up the steep hill to the truck. 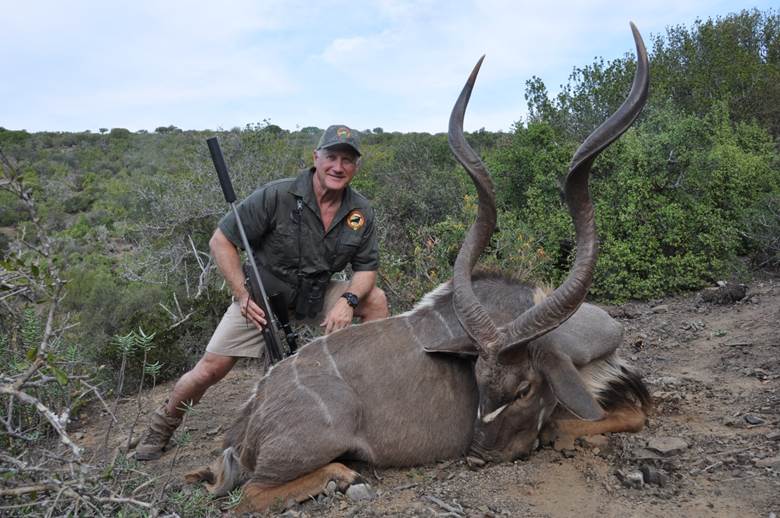 Friday June 10
The following day we decide to head out to flatter terrain to find Springbok. After a morning of hunting, we are finally within striking distance of this gorgeous black Springbok ram. I manage a shot from about 150 yards. It’s a spine shot but he goes down in his tracks just the same. I’d rather be lucky than good. 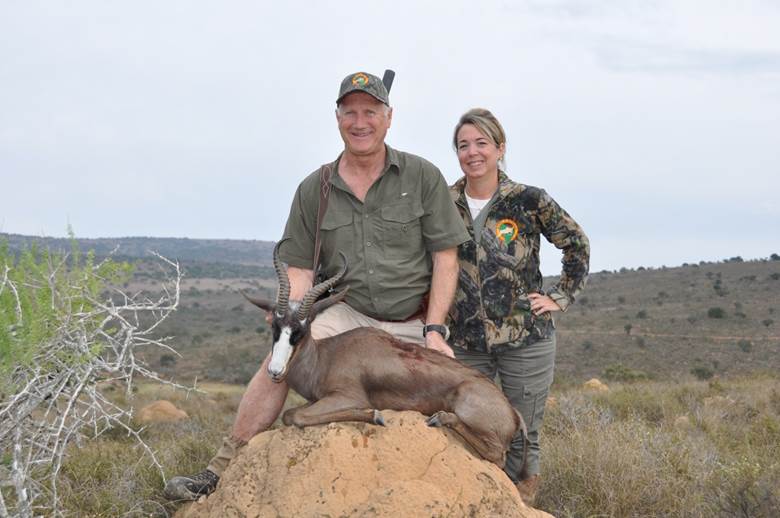 A short time later that morning, I get a shot at this white Blesbok. Any other colors you need, Shari? Looks like a decorator day for her. 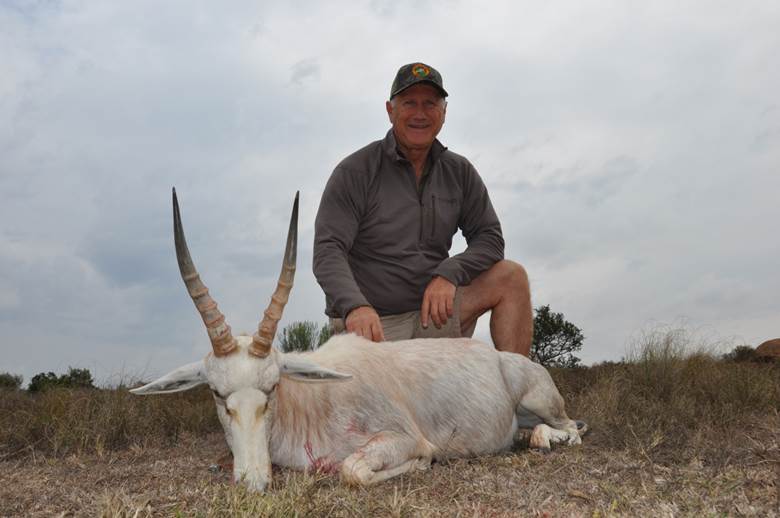 It’s day 7 and Impala Saturday. It’s tough trying to stalk these little guys with so little cover but that afternoon we get close enough to take this nice ram at about 175 yards. He’s almost as difficult to take as the Kudu! 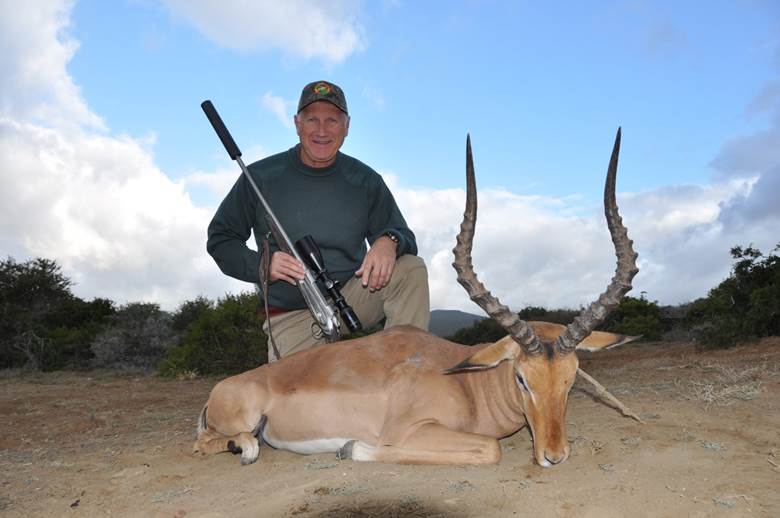 What comes after Impala Saturday but Warthog Sunday. We’re able to collect these three nice ones before we call it a day. 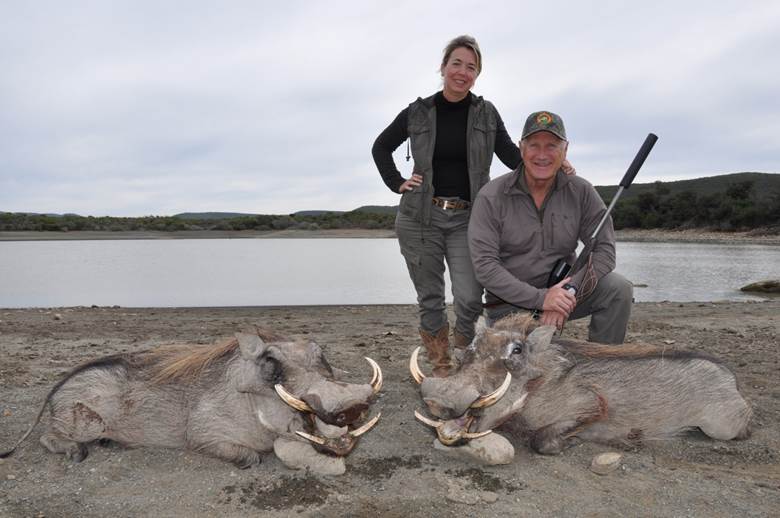 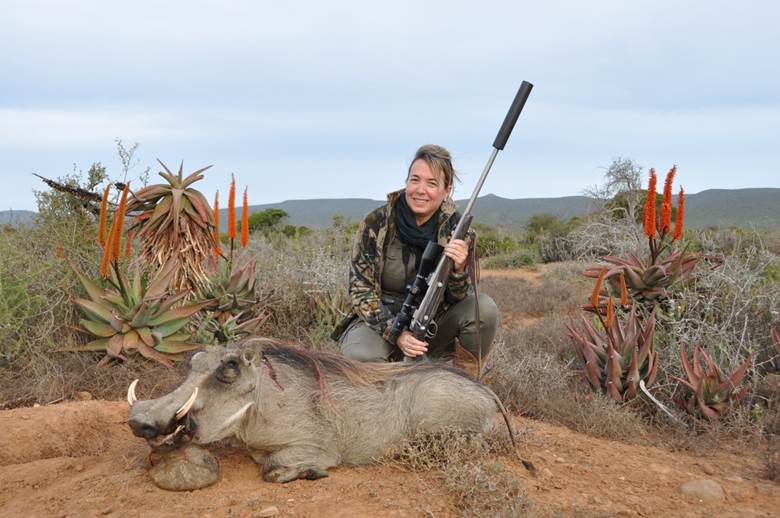 I would like to thank my hosts at Game4Africa, Wikus, Collin, John and Amanda Coetzee for making this such an enjoyable trip. I would like to especially thank my PH, Wik, for his efforts which were responsible for me collecting some fantastic trophies and memories! He’s not only a good host and PH but a great young man. I’ll be back! 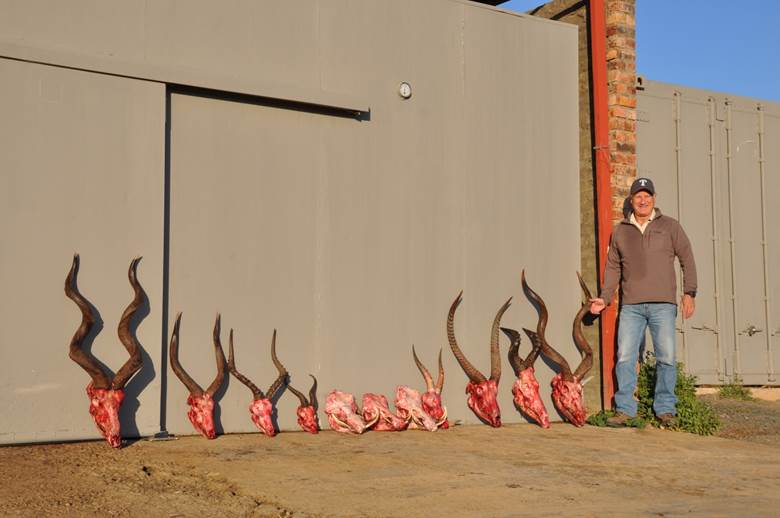 after a trip like that , you need to go back .... just to make sure it wasn't a dream
congratulations , some damn nice trophies
that for the report
THE HUNTER; The person that pays over 90% of the cost for the presavation and maintance of wildlife and gets zero credit for it ................

Congrats for a great hunt, Dave !

Great photos Dave! The eastern cape is loaded with plains game for sure. Looks like you had a great time with Wik and the Game 4 Africa team. It's about time you got this hunt report done, as the taxidermist almost beat you with getting everything mounted and shipped. Post some of those photos as you get them.

That is called stacking them up! Looks like a lot of fun. Several animals with great mass. Congrats. Bruce

I had to go back and reread the first post. I thought you said that there were 4 trophies on your wish list.

Congratulations on your success and thanks for posting your hunt report for us.
R

Man what a great trip that looks like it would be! Thanks for posting.
Last edited by a moderator: Dec 1, 2016

Thanks for the comments everyone. Yes, I'm just a little tardy with this I know but at least got them out before DSC!

Congrats on some great trophies! I really like how each of your kudus has a unique character to his horns.

I agree with rinehart about having the two distinct (and very nice by the way) Kudus. I would love to have both of those in the trophy room. And those dogs sure can be worth their weight in gold can't they.

I think that biggest warthog was supposed to be mine-I guess I’ll have to go back and look for a bigger one. Glad you had such a good trip and thanks for the report!
T

Dave,
Was it a free range hunt? High face, low fence. Did you even see a fence?
Super trophies and pics.
O

Timber69 said:
Dave,
Was it a free range hunt? High face, low fence. Did you even see a fence?
Super trophies and pics.
Click to expand...

Odinsraven said:
Hunted there several times .......its fenced but a long long ways away ...........amazing place and size
Click to expand...

Tell me what it is like. Price is fantastic and like that is family run for years. Have a buddy that needs to be convinced that it's not a canned hunt.
Dave or wick chim in here as you guys have the wish list we are looking for. Buddy wants a lechwe bad and your price is hard to beat.

Odinsraven, skoal to you.
Any info you have on game 4 Africa would be great, being you've hunted there before.

I thought the OP, @Dave Hawkins or Wik would have replied by now. I work with Dave and we have hunted together. I've hunted twice with Wik at @Game 4 Africa Safaris and can tell you the properties are plenty big, some are huge (100,000+ acres) low fence. The "smaller" properties are 10,000 acres or better, on average and high fenced. High fence seems to be the norm in a lot of places in RSA as well as other countries, but they are certainly not canned hunts. Spot and stalk, figure out the wind and when you get busted due to a wind shift or too many eyes around, the animals spook and the stalk is over. It's real hunting.

I did do a short hunt with another outfitter in RSA. The properties were in the 2,000 acre range and we literally drove fence line to fence line. I did not enjoy that as the property was just too small. But this shows how Africa spoils you. If you got invited to a hunt in the US or Canada, say to a friend's ranch or farm, and it was a couple hundred acres, you'd jump at it. Probably doing tree stand hunting, but it's hunting. I hunted a friend's Texas ranch that was 10,000 acres and everyone considered that HUGE. In Africa, 10,000 acres is acceptable, but certainly not huge. Think about it, 10,000 acres is 15.5 square miles. So a property a couple miles wide and 7 or 8 miles long is a large area to hunt, especially when you are the only one hunting it.
T

375,
Thanks for the info.
You must log in or register to reply here.