I was reading the thread about mambas and thought I’d share a simple method i found many years ago for catching snakes. I used to live in New Mexico and caught rattle snakes live to sell. I would find or dig a depression in the ground and cover with a 2’x2’ piece of scrap foam board. leave one side open of course so snakes can get in. I had many of these scattered through the desert and would check them periodically to see if a snake had taken up residence and catch the buzztails and leave the rest. These work great to place around your house and keep rattlesnake numbers down. i’ve never used these for anything but rattle snakes but would think they would work for most snakes. You might need to make them bigger to have room for a mamba. I found the best time to check them was during the hottest time of the day during summer when they used them to stay cool. I also used plywood pieces but found the foam panels to produce better.

If you live in an area with venomous snakes using these traps could greatly reduce the hazard around your home.

My PH in Namibia said the mambas strike so fast you cannot get out of the way at close range and they are long-in length. Never seen a mamba but rattlers here seem slow and a little lazy that is why they have the rattlesnake round ups with hundreds caught and brought in for the contest.
B

Agreed, rattlesnakes are not real fast or aggressive compared to many. Still, if I had mamba or any other venomous snakes around my home id rather meet them at a time and place of my choosing (while checking traps) rather than finding it on my doorstep at midnight when I step outside to pee.
M

Bearbait1, can you post a photo of rattle snake trap? I am corius how it looks like!
Thanks!
B

I dont have any pics. They just look like a piece of foam insulation on the ground with a rock on top.

So is the snake actually trapped, because the hole is deep, or is it a house that will attract the snake, but it could get out?

The trap that he talks about is not actualy a trap but a refuge from the heat,the snake can come and go as it pleases but will usualy stay in the shade during the hot part of the day that's why he suggested checking the traps during the heat of the day.One of our most productive snake traps were used in conjunction with a snake den,once a den was located on the side of a canyon or arroyo we would move downhill from the entrance and place a mt 55 gallon barrel upright on the hillside,then we would take a 10 foot piece ot 3 or 4 in diameter plasti pipe and insert it akout 6 in into the den,the cove the den entrance with dirt,the snakes upon leaving the den would crawl down the length of pipe and fall out the end into the empty drum.Wall la snakes inna barrel,you the sort out the garter,water .bull,hog nose,and whatever that you don't want and keep the ones you do,
B

Yeah, what he said. That oil drum trap is a dandy idea! Unfortunately I am living in a pretty snakeless area now.

here you can have a picture 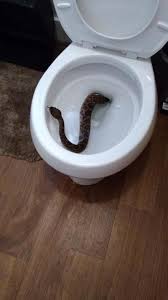 Now that would wake you right up in the morning,

Ahhh just piss on it....Or whatever else you need to do. Just be aware of the repercussions.

We used to make snake traps out of wire screen material. Much like a old type fish trap. Form a cylinder of the wire and then a funnel on one or both ends with the small end of the funnel open. Then arrange wires on the small ends of the funnels hanging down towards the cylinder. The snake will crawl in but will be unable to crawl out due to the wires pointing inwards toward the closed cylinder. As they go in then just push the wires inward and they then fall back down once the snake has passed.
If you don't care where you are, you are not lost.
You must log in or register to reply here.