Word came that a small Buffalo was not very far away from this village in the peninsula area of north east Australia. Scott heard about that and grabbed his 375 H&H Winchester and the 300 grain Nosler Partition cartridges. Scott drove his buggy to the general area whilst scouting the area. He could see a movement at a waterhole some distance away. It is unusual for a buffalo to be in this area but occasionally this happens when a buff wanders from the general area they live in.

Scott got to the general area and glass. The area as there is no way he could drive the buggy any closer without alarming the buffalo that was wallowing in a waterhole. The wind varied a little, but not enough for Scott to make a large detour although he did to some extent. Scott grabbed his rifle which incidentally he bought off me some years ago, as I have 416 Remington magnum and had no use of the 375.

Scott kept as low profile of sorts (he is 6 foot 4 and this is not easy.) Scott got to within about 80 m and could see that the buffalo was getting edgy and sniffing the air. Scott lay on the ground while the buffalo was looking around and did get up and half crawl half and walk to within a comfortable shot distance because the buff was hidden partially by a few scrubby trees.

All of a sudden, the buffalo must have got wind of Scott and the lit out of that waterhole like there was no tomorrow. Scott was on his feet and brought the 375 to his shoulder. The buffalo was running away from Scott, but Scott had the crosshairs focused right on the back of buffalo near the shoulders and fired. The bullet struck the spine right near the shoulders and the buffalo dropped and skidded to a halt!

Scott is a good shot! He was in the Australian Army serving in Afghanistan and let us say he was a good shot. Scott ran to the buffalo and by this time, obviously the local indigenous people heard the shot as it was not all that far from the township. Within minutes, there seemed to be hundreds of people near the buffalo. They cut the horns from the buffalo for Scott and the rest of the meat disappeared like cake at a picnic when the picnic ants arrived.

After digging the bullet out you could see that the base had come off and there was quite obvious that the bullet had a major dent from striking the heavy bone as pictured. The good thing about this is that there was not a piece of meat that went to waste. The local indigenous people are very poor and cannot afford to buy beef and getting this free meat was an absolute godsend to them. Scott often shoots scrub cattle and gives the meat to the families who need it most.

Scott bought my 375 some time ago but it was the same rifle and cartridge combination that my son, Craig used to hunt the scrub ball as pictured below. I have used Nosler bullets including the Partition and a solid base and although there might be more sophisticated bullets available now. I found the Noslers quite adequate.

I hope you enjoyed a little snippet of the meat buffalo. 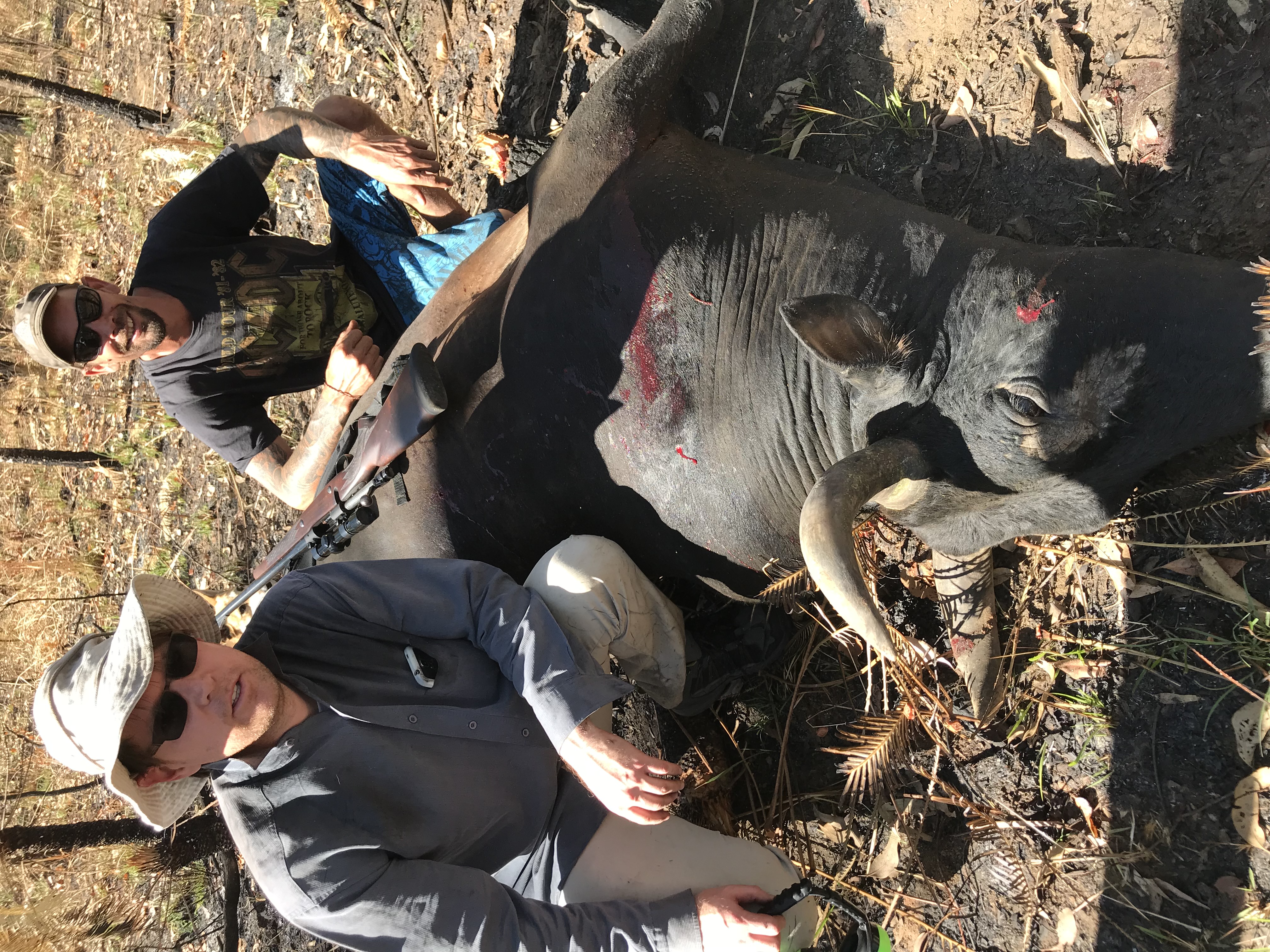 Cool, it's always good to help someone out, hunting and harvesting go hand in hand and ensure you are welcome in the area.
Chris “Australia"
Dreaming of Africa, Hunted Africa, 2020
The website made me do it!

As in Africa nothing goes to waste.
Thanks for sharing
Keep the wind in your face and enjoy your hunt!

Good story, thanks for sharing !

Very nice!!! Thanks for sharing!!!

Hunters for the Hungry seems to be a program / process that works world-wide.
You must log in or register to reply here.