Went hunting early to avoid the heat.
Saw a scrub bull and stalked him.
I was using 416 Remington magnum loaded with 400 grain Woodleigh hydros backed by 77 grains of AR2208.
First shot knocked him over. Somehow he got up and started to run. I shot him through the top of the shoulder well almost the top.
My son Craig had a shot with the same rifle (Winchester bolt action - Safari model).
The bull ran down and up a small gully and hid behind some trees.
We started to close the distance and fired again. The bull flopped down.
When we arrived at the scene the bull was still kicking and was not dead. A mercy shot fixed that.
I wanted the back straps first of all and started cutting.
Von Gruff’s new skinning knife I bought was used and believe me I was delighted with the performance.
Took the hind quarters too.. I didn’t need to sharpen the VG knife at all! I’m truly
impressed.

Even though the heat hadn’t really set in. The perspiration just ran off me.
Overall I’m very happy with the Woodleigh and VG knife! 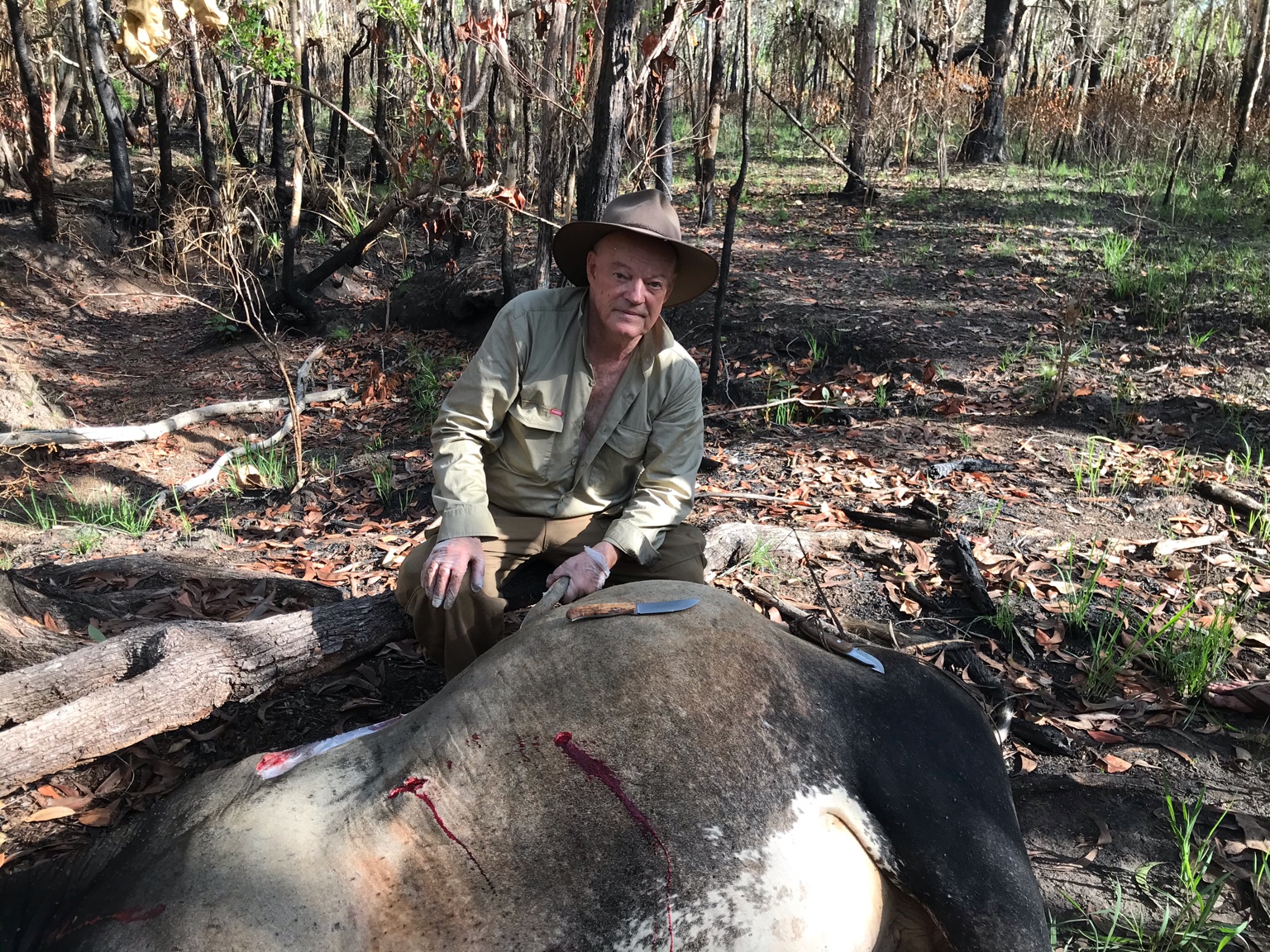 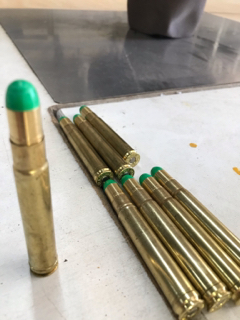 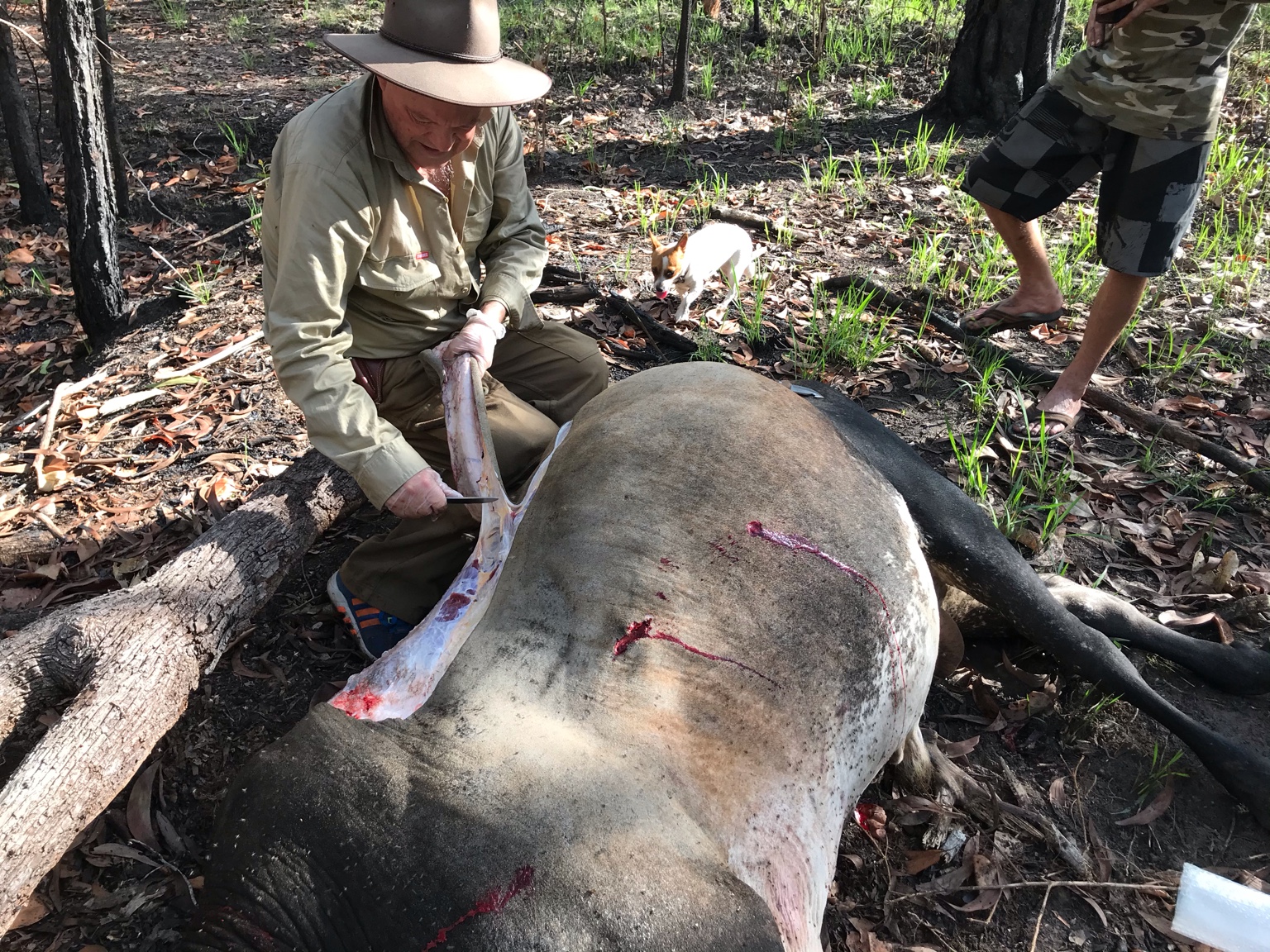 good job one for the pot is that meat very gamy tasteing watch the heat its deadly.

Yes and the heat is bad - I was just sick but will be ok shortly.
Meat will feed the hosts’ dogs for quite a while. I took the back straps too for my hosts.
Last edited by a moderator: Nov 15, 2019

Going out in a few hours after barramundi - delicious critter and full of fight.

Good luck.
Congrats on your back strap hunt.

Congratulations, Ray! The heat is insane! Hope you catch some barra!

BenKK said:
Congratulations, Ray! The heat is insane! Hope you catch some barra!
Click to expand...

Thank you.
I could not believe how much I perspired ar 8:30 cutting the bull. Unbelievable.
The other amazing thing is I broke both shoulders with the first shot and he still managed to run ( not fir long or far).

Congratulations! Looks like a great day in the field
"When my friends tell me that I have led a remarkable life, I have to admit having done my best to make it so" - John Kingsley-Heath

I can sincerely say that’s the best knife I have ever had. Thank you. 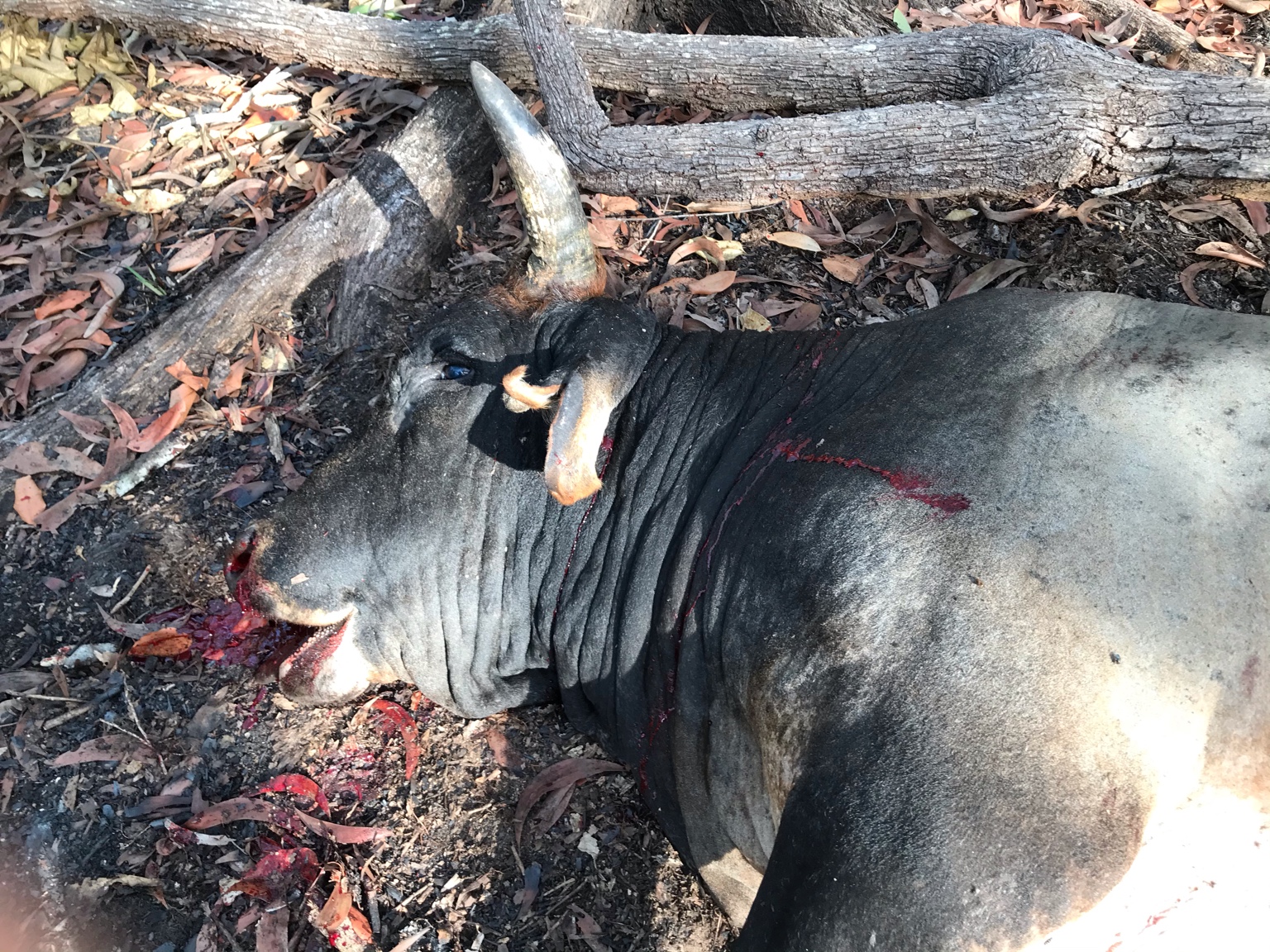 He was surprisingly hard to drop even with a 400 grain Woodleigh hydro in 416 Remington.

Nothing like bull my son shot
last year but a mighty lot harder to drop. 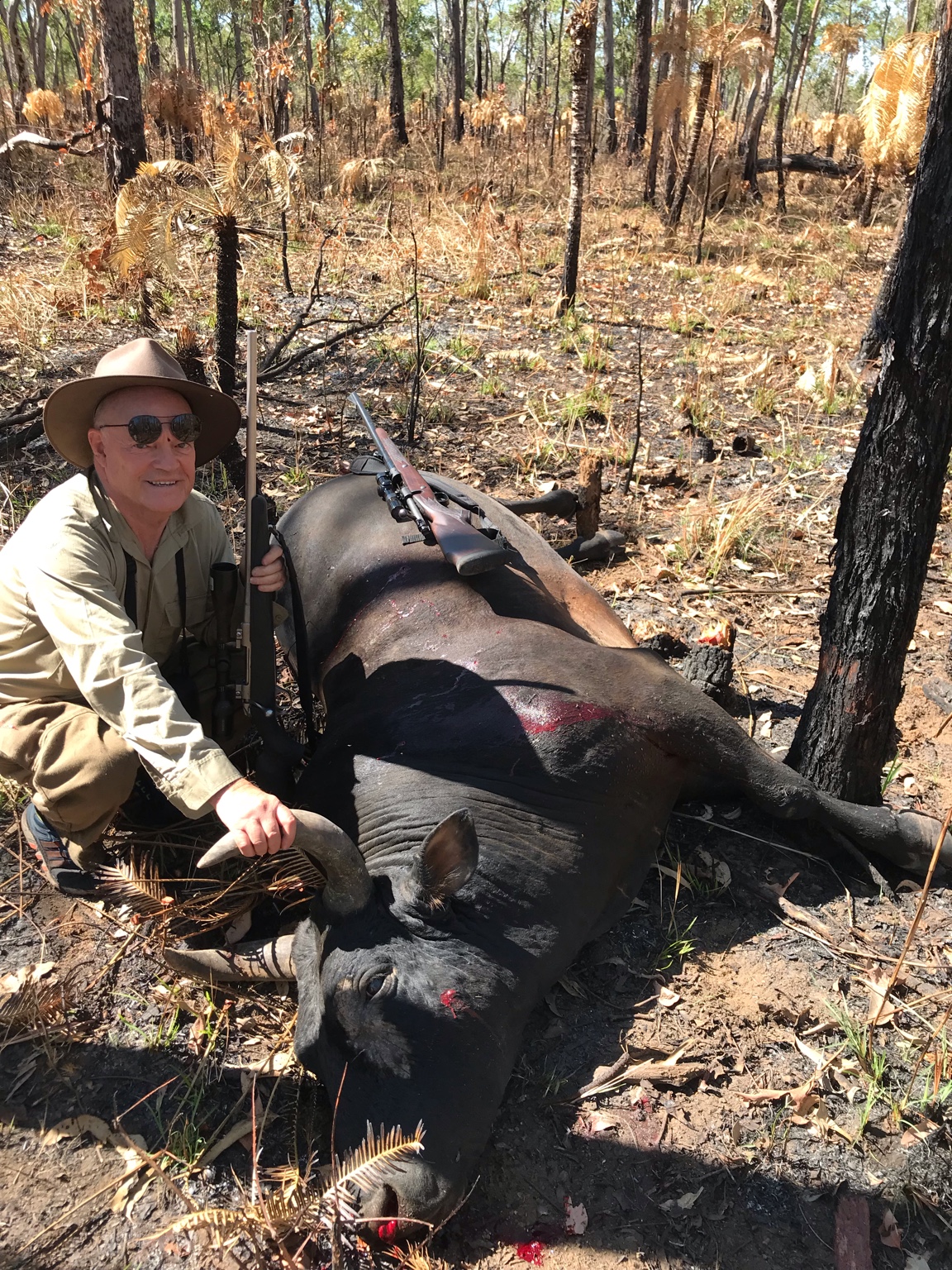 Dr. Ray, it looks like you had a very successful and enjoyable hunt. Thanks for sharing. Did you catch one of those big fish? I totally agree with you that Von Gruff's knives are the real deal. I'm hoping someone will post their experiences after many uses stating that the edge is still sharp.

Dr Ray, I don’t know how I missed this report! Great taking that rugged looking scrum bull! I’m wondering if the old bull didn’t stay down like last years because the Woodleigh solid bullets didn’t expand? Although breaking both front shoulders should have put it down I would think!
Another fun Aussie experience! Thanks for sharing! So great you and your son hunt together!
Africa on my mind.

Dr Ray said:
Thought I’d add a photo of the very tough scrub bull.
View attachment 315403
He was surprisingly hard to drop even with a 400 grain Woodleigh hydro in 416 Remington.
Click to expand...

Ridgewalker said:
Dr Ray, I don’t know how I missed this report! Great taking that rugged looking scrum bull! I’m wondering if the old bull didn’t stay down like last years because the Woodleigh solid bullets didn’t expand? Although breaking both front shoulders should have put it down I would think!
Another fun Aussie experience! Thanks for sharing! So great you and your son hunt together!
Click to expand...

That seems to be the suggestion by a number of people. My son Craig was the first to say so and suggested softer Bullets or drop back to using the 375.
I was suggested too that I should use the other Woodleigh Bullets (non hydros).
Baz 500 an ex-slaughter man said that the off- shoulder must not have been broken. The bull when regaining his feet limped off so I assume I broke the right shoulder but as you can see the left shoulder (offside) has the bullet exit wound and I’m sure that it was either broken or at least severely damaged,
Had the left shoulder been broken I figure that there’s no way the bull could have walked away.
Interesting - after “running” away the bull hid behind some trees but didn’t move. 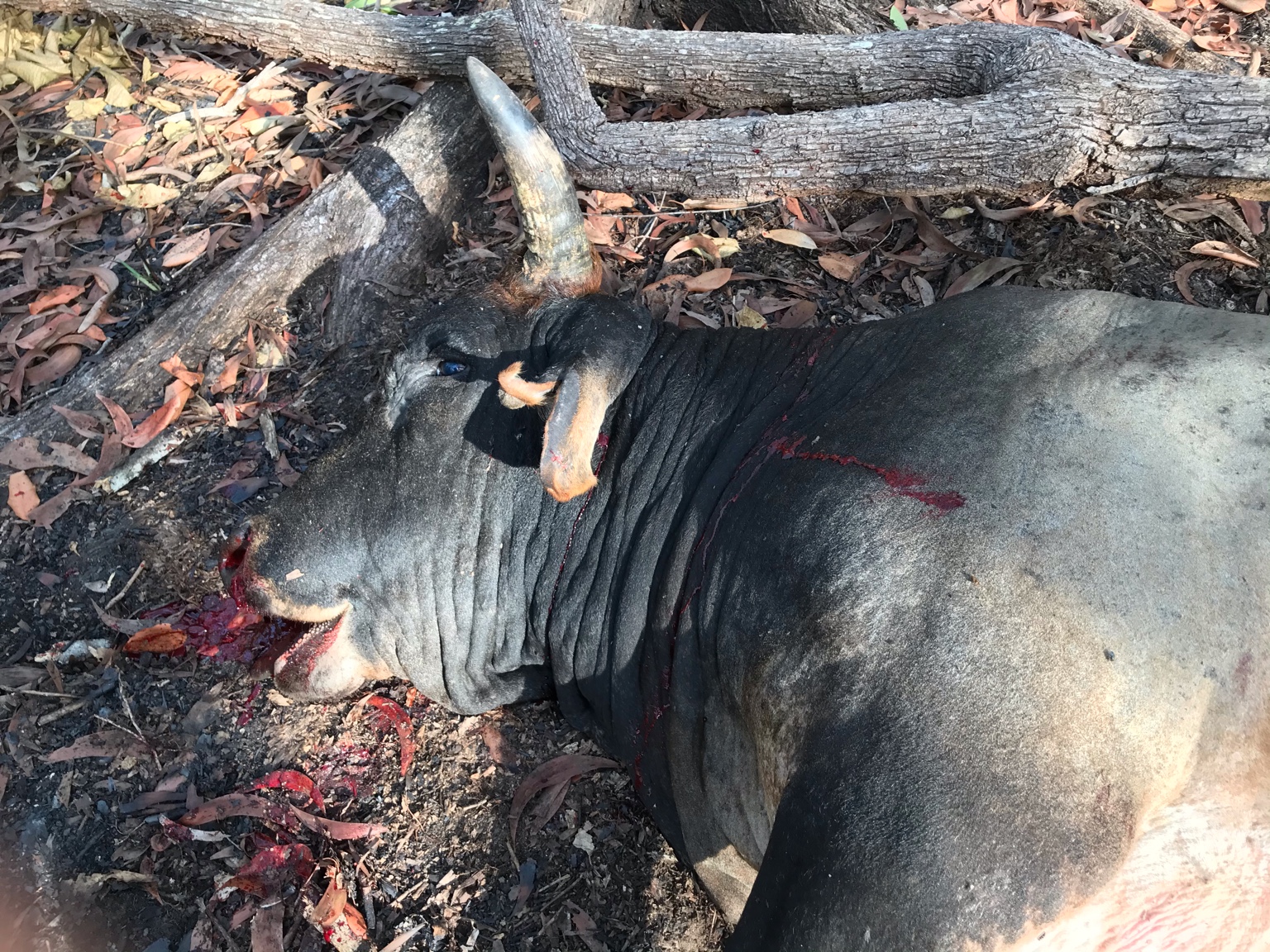 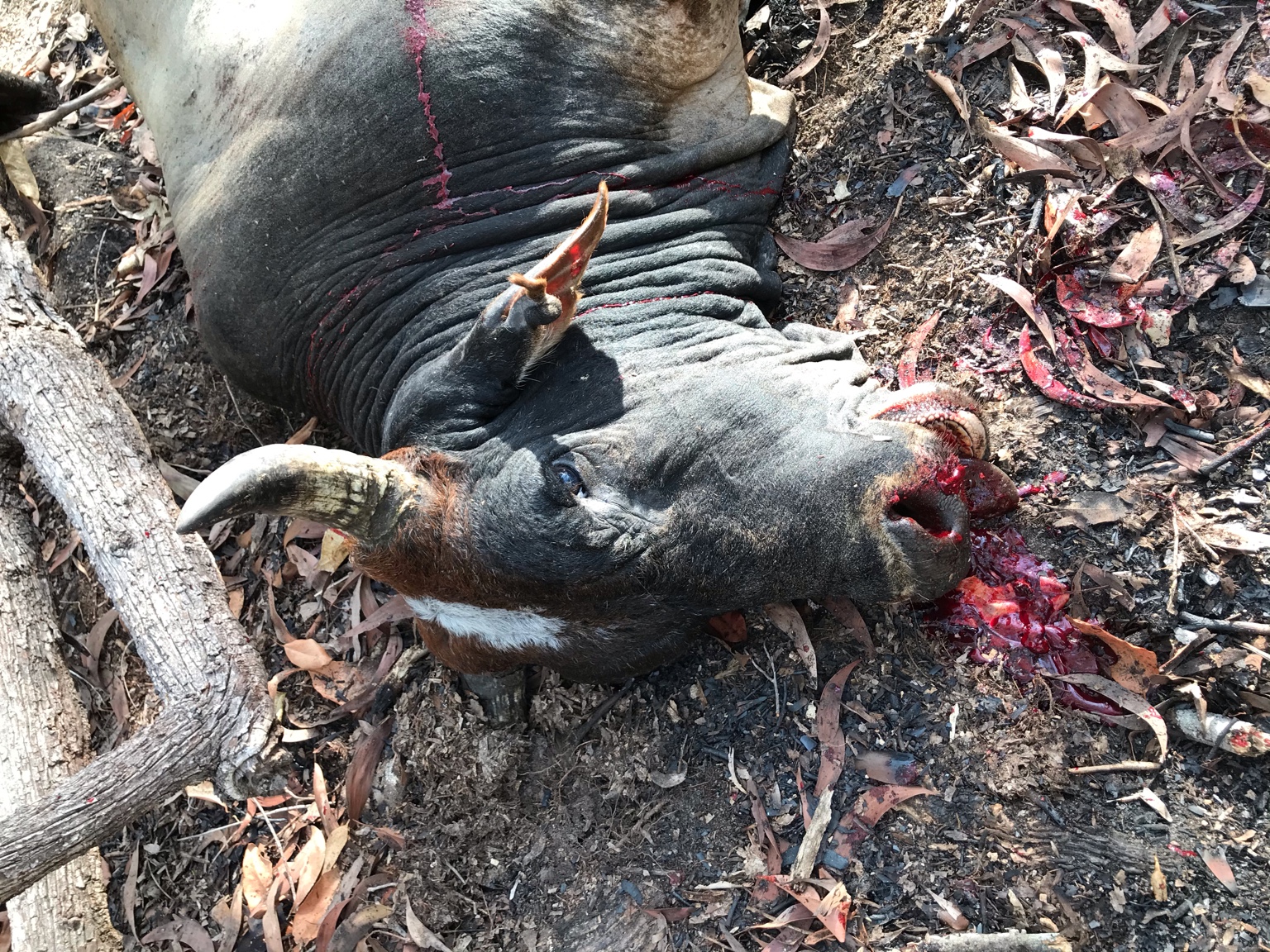 the last few posts were where I was going to as well.
a hole in a shoulder blade(s) will not be a stopping shot.
the same bullet through the spine in that area will.
a bigger hole will kill sooner than a smaller diameter one.
the 375 won't kill an animal the size of a beast better than a 416 if both are using ideal bullets.
it would have been good to remove the shoulders and see what went on in there, and they are not too hard to remove,
bruce.
You must log in or register to reply here.

The Turkey & the Bull