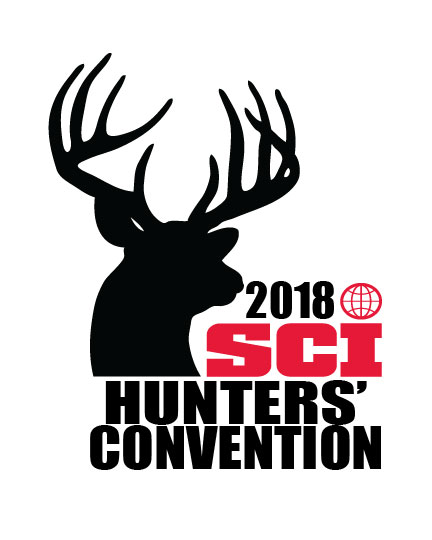 In 2018, Safari Club International has a new home for its last convention for several years in Las Vegas- the Las Vegas Convention Center. In recent years, the convention has been at Mandalay Bay.

This planned move started back in 2013 when the Mandalay Bay did not have open dates for SCI's convention. The Las Vegas Convention Center, the largest convention facility in the city with over 2 million square feet of exhibit space, stepped in and offered SCI a great location and great dates for its 46th Annual Hunters' Convention.

SCI provides complimentary shuttles to and from the Las Vegas Convention center and its hotels. SCI can provide attendees with everything needed to find and book their next destination to hunt and fish.

The SCI convention is not just for hunters, though. It is for Sportsmen and Sportswomen of every type. It truly is an amazing event, with six continents under one roof. Exhibitors offer a wide array of fabulous custom works in guns, art, wildlife jewelry, taxidermy, furniture and gear. SCI will be located in the Center and North Halls, with over 2,200 booths and 1,100 exhibitors.

After the 2018 SCI Las Vegas convention, SCI will not be back in Las Vegas until 2022, when SCI celebrates its 50th Anniversary.

Take a "Walk on the Wild Side" and book your room now at the MGM Grand at www.showsci.org/hotels while discounts are available. Everyone recommends staying for the entire four-day show to shop and to enjoy the nightly entertainment.

Well-known comedian Tim Allen will perform at the Wednesday night opening gala dinner and auction. Tim, known as Tim the Tool Man for years, more recently became well-known for "Last Man Standing." Closing the event on Saturday night, keynote speaker Chris Cox, the executive director of the NRA Institute for Legislative Action, will provide an insider's insight into the most asked questions about today's political issues. Register now to get a discounted badge for this spectacular event. If you're not a member, it's easy to join. The convention is just one of the many benefits that are available.

Nearly $10 million in hunts, guns and more will be sold during the daily live and silent auctions. You've got to be there to see what only the mind can dream. And these dreams will come true! Come and explore the possibilities. Bid on hunts from around the world or right here at home. Search for your next trip, using SCI's online auction browser. The money raised during the convention provides the majority of the crucial funds SCI needs to protect the hunting heritage. Over $15 million was raised during the 2017 convention to fund SCI and SCI Foundation programs benefitting Hunter Advocacy and Conservation.

Registered! My wife and I are going this year.
Facta non Verba

Does anyone know they wont be back for a few years?
Tommorow is promised to no one. Go live your dreams.
D

johnnyblues said:
Does anyone know they wont be back for a few years?
Click to expand...

Headed back to Reno which was supposed to have upgraded convention center and increased airline capacity.

But the real reason is a guy who worked for SCI went to work for Reno Convention center, and POOF!, all the sudden it was a good place to be again. LOL

Reno will be a nice spot to have the show. I guess it is good that this upcoming one in Vegas will not be at Mandalay Bay after recent events there.

Thanks for the updates and info Jerome!

Going to attend one day.
Tommorow is promised to no one. Go live your dreams.

Lrntolive said:
Registered! My wife and I are going this year.
Click to expand...

I am booked and ready for this fun event! Hope to meet many of you there. Please look me up. Much of the time I’ll be in ARU Safaris booth so please come see me!
Regards,
Philip

My wife and I will attend on Saturday. First time attending. Just wanted to see what it's like. Hope to meet some AH crew.
Facta non Verba

Can't wait. Put it on my calendar every year. Just a ton of fun. It's almost overload. Lol. So much to see.
D

I cannot make it this year but next year it will be closer to me anyway and I plan to attend. I have really enjoyed it the other years I went.
You must log in or register to reply here.

More than 20,000 Members were able to Chase The Adventure at the 46th Annual SCI Hunters’ Convention