Landed in Reno, NV, about 10:30am last Thursday and was really excited to finally be here. There was an accessible shuttle to harrah’s, but we would’ve had to wait a half hour, so dad & I took a cab. Safari Club has a room for me at the peppermill, but my entourage is all staying at harrah’s.

The weather is perfect, cool & sunny, and after lunch, I took the shuttle by myself over to the SCI convention at the Reno-Sparks convention hall. I found Eva Wilson at the Humanitarian Services Booth (and the Pathfinder Award winners). She made me feel like a V.I.P. and took me over to meet Jan Oelofse of Oelofse Safaris. They’re going to be hosting me on my 10-day safari in June as part of my award. I met Jan, who is a legend in the safari world because of his work capturing animals for zoos, guiding John Wayne, and training animals for the movie Hatari, his wife Annette, and his son Alex. They are fantastic people with a passion for hunting the right way and I can’t tell you how blessed I am to be going with them. Alex showed me a bunch of pics from past disabled hunters that they have hosted and we talked about me bringing my crossbow with me when I come. Booyah!

Alex then took me over to the Highveld taxidermy booth to meet Thomas. They are donating the taxidermy on my safari and the day was starting to climb off the charts. Great meeting you Thomas!

The SCI convention is flat out huge. This is by far the biggest & best I’ve ever seen. I spotted Craig Boddington signing books on my way out. Couldn’t stay long today because I had to meet my people for dinner and then get back to the Peppermill for therapy. More tomorrow…

Made it over to the convention hall about 9:40am this morning. Eva Wilson & Ron Bartels were both waiting there for me at the Humanitarian Services booth. (That's the branch of safari club that runs the blue bag program and all the disabled hunter services which includes the pathfinder award.)

We all went over to the Oelofse's booth so I could introduce my dad to Jan & Annette and Ron could present Jan with yet another donor plaque for his generosity toward the program. Dad bought Jan's book and we had another long talk about hunting in Namibia. Alex and I talked about maybe going after a mountain zebra on my safari. I'm pumped!

From there, Ron took us over to Jim Shockey's booth so we could meet and talk to him too. Ron has hunted several times with Jim and I believe he knows almost everybody that's worth knowing in this whole building. About every ten steps, someone stops to talk to him. Ron said both Jim and his daughter Eva were there earlier (and that Eva is really "worth meeting". They weren't there though. Rumor had it that Jim had slipped away to book a few hunts for himself before his wife Louise found out about it.

From there, Dad & I headed off on our own to browse through the myriad of outfitters, artists, merchants, taxidermists, tv personalities & auction items that were spread out among four different rooms. The place was vast, and let me tell you, some of the highest quality show stuff I've ever seen. We could've literally spend three solid days here looking at just the art & awesome taxidermy.

Passed by the African Hunting Gazette booth next. As I rolled up, I asked the lady behind the counter if the next issue was out, to which she replied "Yes, and you're in there. Don't worry." Ha! I wasn't expecting her to recognize me. I didn't know she was the person in charge of article submissions. Needless to say, I was impressed and now y'all know I have a published piece in one of the 'big' safari magazines. They gave me a few copies and we were on our way. Oh by the way, they had a full mounted porcupine at the booth that was a gorgeous mount. I'm putting one on my wish list for Namibia this summer.

Since my award dinner was that night, dad & I left early so I could get some rest before it was time. Whew!

(On the way out, we heard that we'd missed Sean Connery by about ten minutes at the humanitarian services booth. Sorry dad, you could've met one of your idols and the 2nd best James Bond.)
W

It was a little bit awe inspiring when rolling into the Tuscany Ballroom at the Peppermill hotel where all the nightly events were held. This room is vast, which seems to be the theme of everything I've been to this week, almost 3,000 people were seated for a dinner event. Tonight, I'm being presented with the Pathfinder award which is given to accomplished disabled hunters who have helped other challenged outdoorsmen & women get back in the field.

The stage was set and I got ushered to one of the head tables near stage left. I had no idea this award was so prestigious until now. My sincere thank you goes to the Safari Club for creating an award in this obscure field we call disabled hunting. I can feel the electricity in the air.

I got to sit by Ron bartels' lovely wife Jackie, both of whom are from Louisiana. Naturally, we got along great since half my family is from there (so long as nobody brought up the cotton bowl score.) I also had an entourage of friends & family there to share this night with me. They had a reserved table right next to ours, and the party was just getting started.

Before I knew it, I was backstage and watching the video that they made about me before I was presented the Pathfinder award onstage. Let me tell you, I was 50/50 on whether I was going to cry or not out there. I was already tearing up when the video started. Hard to believe the journey to this spot began 25 years ago with some cloth tape and a flimsy metal device they sent me home from the rehab with (for holding a pen). That's a long stretch of time guys, lots of ups & downs. I held my water though.

Maybe I can post the video on youtube someday hen I get it. Anyway, Alex Oelofse presented me with my award and we got a standing ovation, even though we couldn't see it with all the q-beam strength lights in our eyes. A grand time was had by all.

I have to thank SCI Foundation for creating an award in the obscure field we call disabled hunting', and all the donors that support this program: Oelofse Safaris, Sandhurst Safaris, Highveld taxidermy, Fauna & Flora shipping, and Cabela's.

1. Learning takes the sting out of failure.
2. When your life is changed by a tragic event, as soon as you find some meaning in that journey, it ceases to be a tragedy.

Congratulations on your award and thanks for posting the story. I wish you the best of luck on your upcoming safari.

Congratulations on your well deserved award. Thanks for all you do! "Keep on Keepin' on"

Nice review of the show and your experiences there. A big congratulations on your award. Good luck in Namibia!

Great review of a great show. I had a great time, as always, and will go back. But I also had a disturbing experience, and I wonder if I'm the only one.

As those of you who bought anything at the show will know, most vendors don't have the technology at their booths (for various reasons) to scan credit cards as they would at a store. Many were handling credit cards the old fashioned way - taking an imprint of your card, and getting your details - name and address - in writing. So far no problem. But at least one was getting more than just that - I beleive he (or she) was also taking note of the security code on the back of the card, perhaps while checking the signiture.

On February 1, I went on-line to pay some bills from my bank account. I noticed my "Avaialable Credit' on my credit card seemed very low, so I had a lok at my recent activity. I found that from January 29, when I first used my card, someone had been charging up a storm at online stores using my card. First charge was $4800 for Ipads and a MacBook Pro from the Apple online store. When I spoke to Apple, they refused to tell me what the shipping address was, but they did confirm that the order showed my name, my billing address and the correct security code for the card.

Of course, my card was immediately cancelled, but it's not only hugely inconvenient, it makes you feel like you've been taken - likely because you have!

I can't prove that this was done by a vendor at the show, but given that no one else had access to these details, and the acitivty started right away, there's no other explanation that makes sense (and my bank agrees). My only hope is that some of these vendors hired local help which was less than reputable . . . otherwise I may have a bigger issue with those I do business with.

Too bad, because it leaves a bad taste.

Thank you for sharing your experience at the SCI convention with us. Congratulations, the Pathfinder Award is a huge recognition for sure. It sounds like your journey has been a challenging one and I hope that your hard earned knowledge will continue to be of great benefit to the growing number of disabled hunters that are coming back from war. It is so important to have role models who can lead the way as you are doing.

I know you will have a great safari in Namibia, it is an amazing country and I hope that you will share your hunting safari with us upon your return. I wanted to let you know, however, that Namibia does not allow hunting with a crossbow. You may want to contact the outfitter to clarify this before bringing your crossbow over only to find that you can not use it to hunt with.

Here is a picture of the Porcupine that you are referring to at the African Hunting Gazette booth, I also thought that it would be an excellent addition to any trophy room. The picture doesn't do justice to how beautiful it is in person... 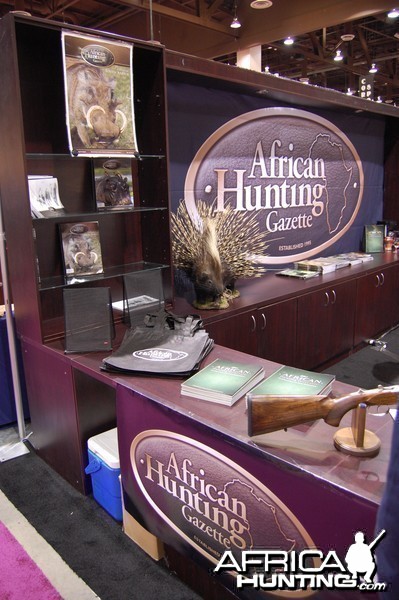 Here are a couple pics from the show. The first is Jan, Annette & Alex at the Oelofse safaris booth in Reno. The second is my friend Amber & me just after he award presentation. Pathfinder is in the foreground.