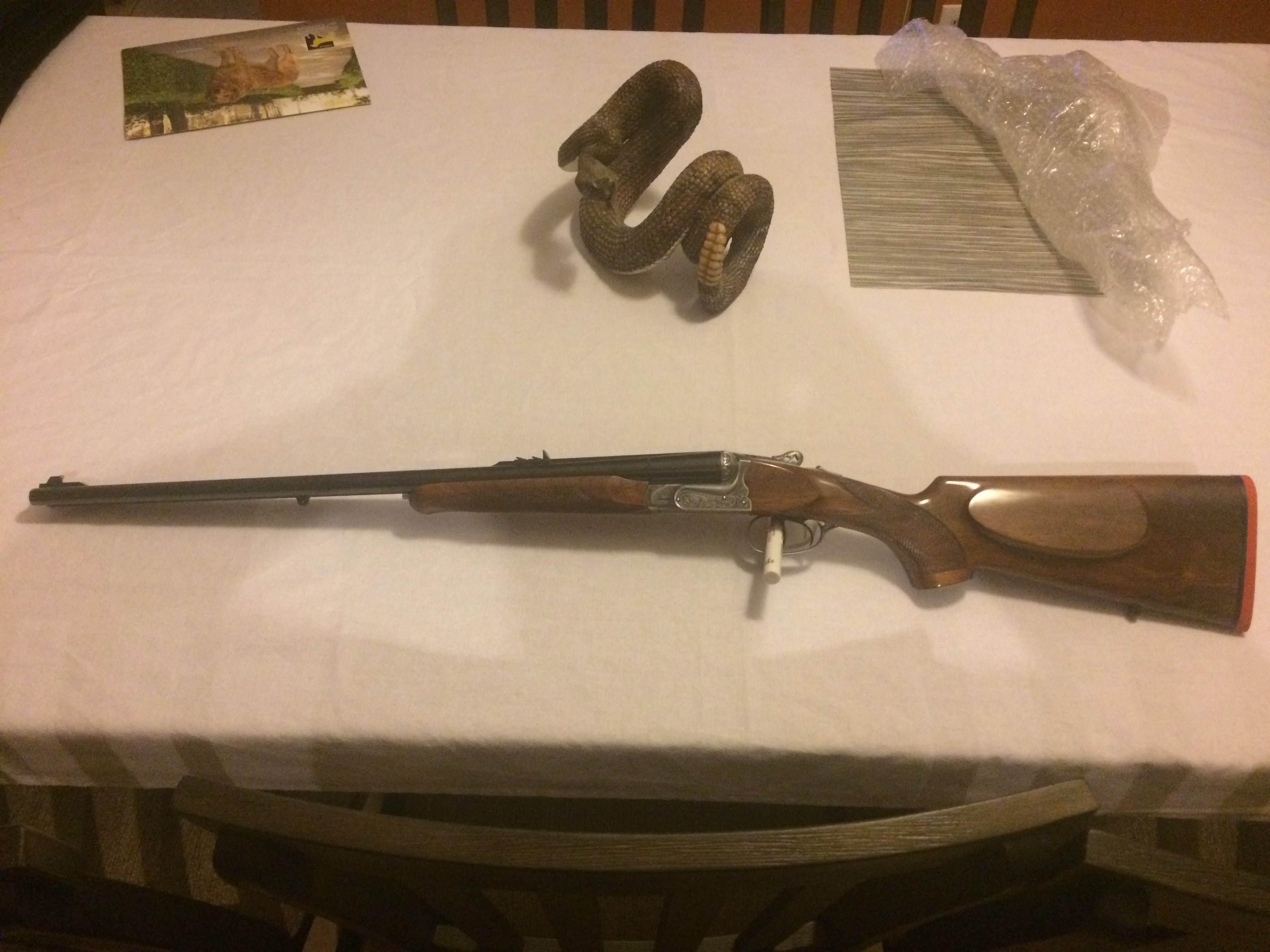 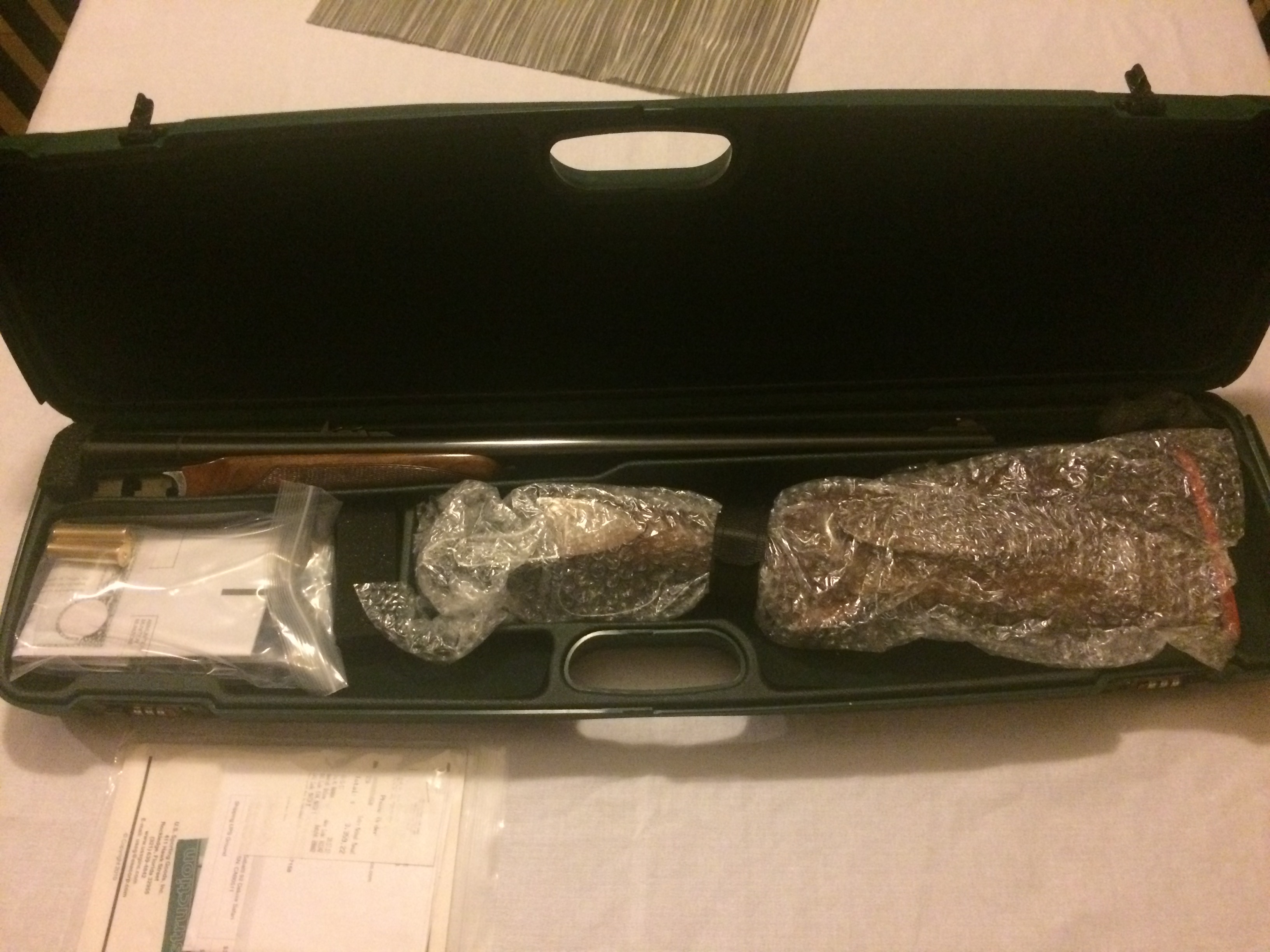 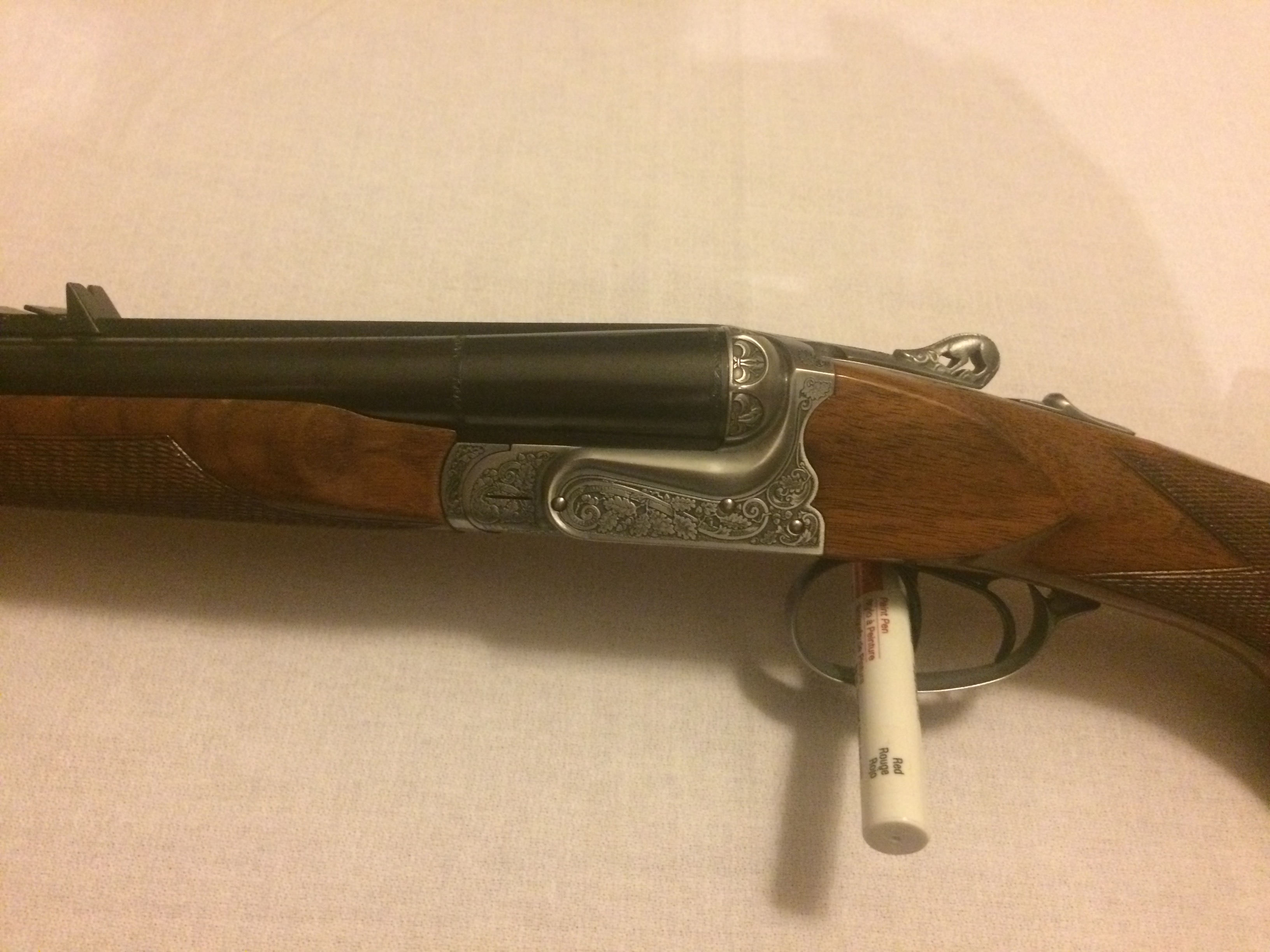 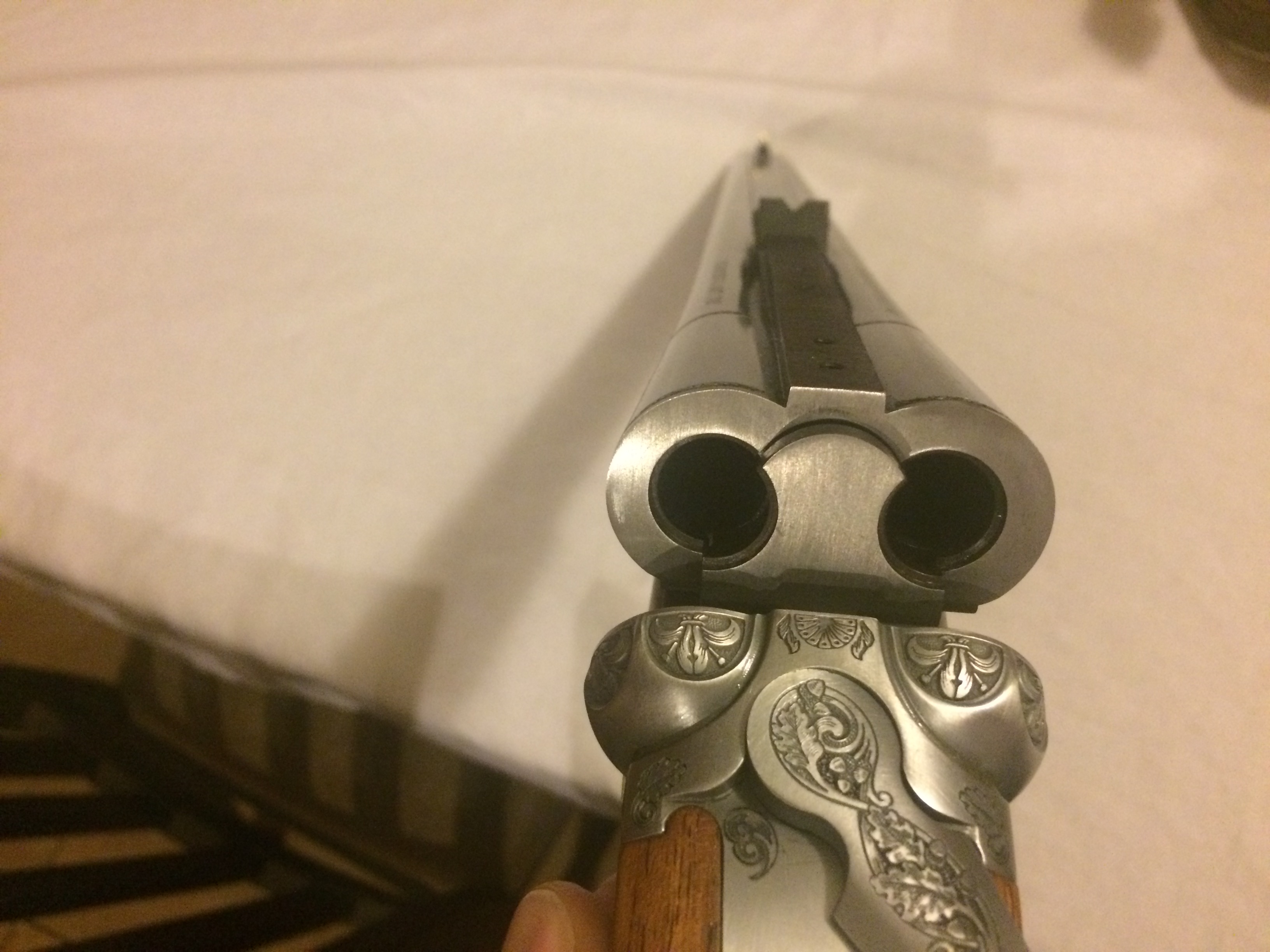 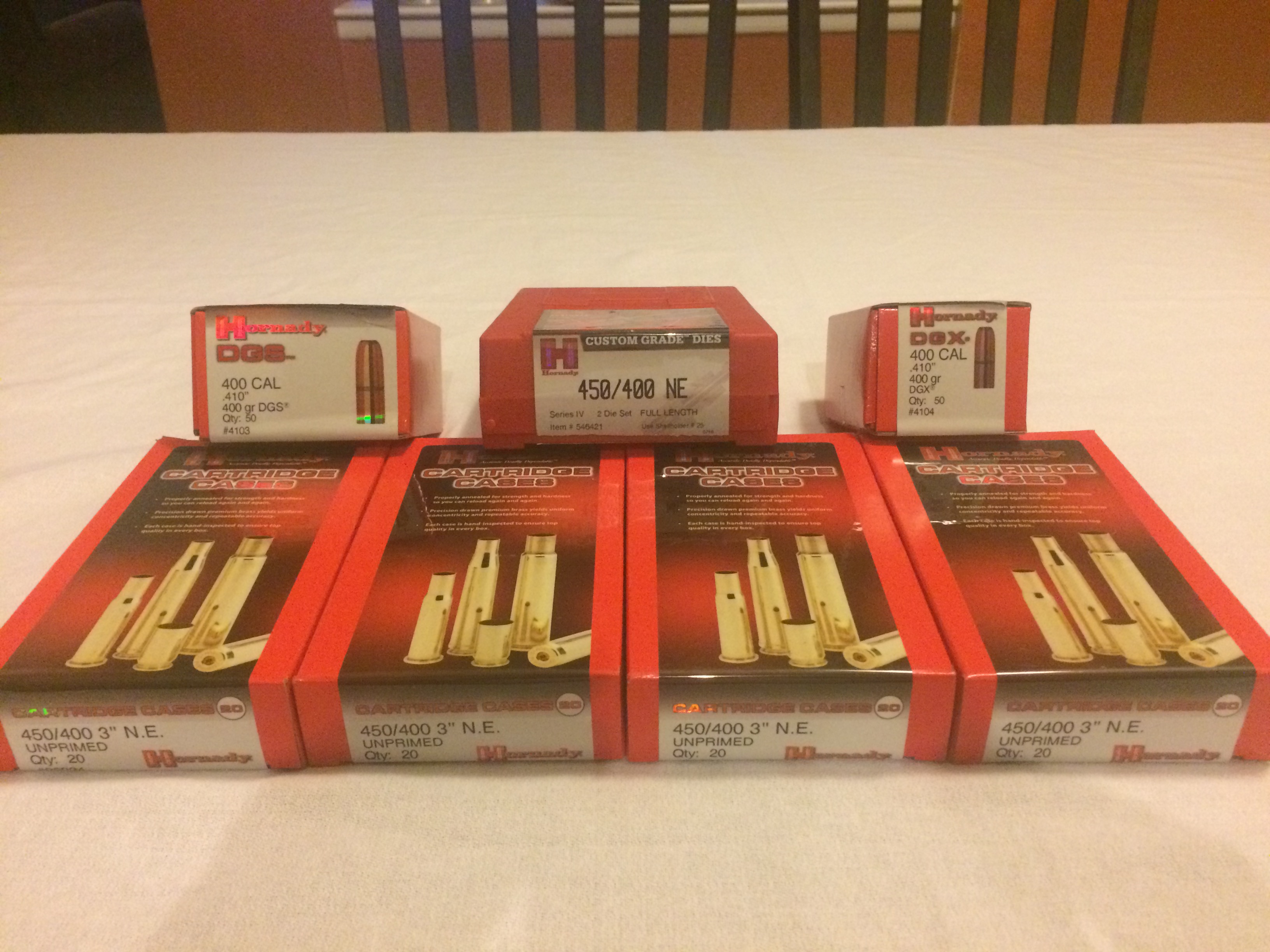 I bought this on a whim a while ago. Sadly, I don't have the time to devote to it nor does it fit with my hunting plans in the near future. I would love to see this rifle go to a good home with a family who will actually use it. This is definitely the most beautiful firearm that I own.
It was regulated with Hornady 400-grain DGX ammunition. Now that this is being offered with a bonded bullet, it is even more viable as a dangerous game round. I fired it twenty times with satisfactory results. If I was going to keep it, I was planning to obtain a red dot optic and zero to that. I'm selling it for what I have into it. Please personal message me if you are interested.

I swore when I got it that .375H&H would be all the gun I would ever need.. and that all those crazy big bore and double rifle guys would never influence me otherwise..

and yet now I find myself salivating every time I see a nice double come up for grabs at a good price..

If I didnt think the house boss would castrate me I'd be trying to figure out how to send you money now..

Mdwest,
Do not let the thought of castration stop you from owning this classic chambered double. Odds are she would not really do it. I’m sure your wife is a sensible woman and realizes that you need a double. I suggest book a nice trip for her to go to the spa and while she is away for the day do like any respectable husband would do and sneak the gun into the house. Slowly acclimate her to it with short periods of interaction with it so that her subconscious gets used to seeing it. Once this is complete you can come and go as you please with your old double rifle.
"Montana seems to be what a small boy would think Texas is like from hearing Texans" John Steinbeck

mdwest said:
If I didnt think the house boss would castrate me
Click to expand...

Happens after a while anyway so what the hell....... May as well buy the gun

Mdwest: My wife was a "strong Southern woman" from DFW. You know, really girly but she would snuff someone if she had to. She'd get mad, but I doubt that she would have actually killed or castrated me. I can only postulate that your lovely wife is the same.
Gentlemen, I appreciate you stopping by and commenting on the post. My next stop will be Gunbroker. However, I thought I would take a shot at selling it here first. I'm not in a hurry to sell it, but it would be nice to do. It really should go to someone who would use this beautiful gun, hence my comment about finding a good home for it. I have a Cape Buffalo hunt that I'm paying for in 2019. Something had to go.
If you have any questions, please PM me. I intend to be at the AH Get Together at SCI this year. I live in Las Vegas so it's available for showings as long as you don't mind my ill-behaved but wonderful Golden Retrievers.

Hmmm things to think about.

how does it shoot? maybe a photo of final target?

Good luck with the sale! If I hadn't started building the 400 H&H I would be seriously considering this. It will be a good buy for someone.
"When my friends tell me that I have led a remarkable life, I have to admit having done my best to make it so" - John Kingsley-Heath

What a deal! If it was a lefty, I'd be very interested!

I’m interested. Unfortunately it’s either pay tuition or buy this gun and my student loans are only good for one good luck selling it.

That’s the excuse I’m using too

lets get it straight,you need the double far more than you need the balls,get the double,she will get use to you speaking in soprano.

vanguard, another question. have the barrels been ground on at all to get regulation? i know sabatti did have some earlier models that were regulated in that manner. thanks.

I swore when I got it that .375H&H would be all the gun I would ever need.. and that all those crazy big bore and double rifle guys would never influence me otherwise..

edward said:
lets get it straight,you need the double far more than you need the balls,get the double,she will get use to you speaking in soprano.
Click to expand...

Nice looking rifle, someone will be getting a great new addition!
John 3:16
G

Apart from being stony-broke, and not having a L L ((Lovely Lady - wife), my Doc told me I shoot blanks anyway . I'd love to own such a fine piece of functional art . . .

1dirthawker: I'm posting a picture of the factory target. Regrettably, I did not take a picture of any groups that I shot. Over two range sessions, I fired twenty rounds from a LeadSled at 50 yards. I made due with what I had available at my range. My groupings were consistent with the factory target. This is why I thought of the red dot sight as I would ultimately zeroed this at 100 yards. I made every effort not to damage or scratch the rifle.

I have stared at the muzzles wondering if they were ground. I don't think so. However, I don't want to represent that they are not when a more trained eye would see that it was. The rifling appears to extend to the muzzles. I have seen pictures of some of the Sabatti's with ground muzzles and this is nothing like that. This is not to rationalize, but if it regulates properly what does it matter that it's ground?

I suspect that this may be a "Cabela's" rifle given that the serial number has a CAB prefix. Everything seems to work as designed with the rifle. The reason that there are 79 new cases is because I never crimp any of my rifle rounds. Accordingly, I have no idea how to do it properly. I destroyed a case in the process of experimenting. Supposedly, the .450/400 requires a crimp for proper powder ignition. If I were to keep this rifle, I would probably use factory ammo for hunting until I found a handload that would regulate properly. This is why the new owner should have patience.

Gentlemen: Thank you again for looking at my rifle. It's an amount of money that most of us can't part with easily. I really enjoy the comments. Thank you again. 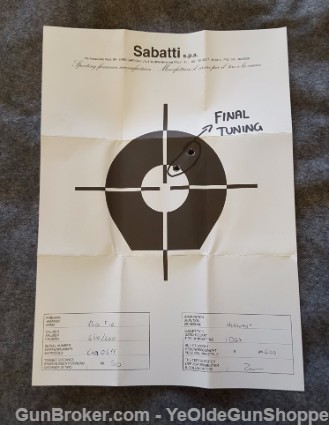 gizmo said:
Damnit, I've been looking for one of these used in great shape for ever....... Sadly I have zero money right now.
Click to expand...

I feel your pain.

All the best on your sale sir.
Owner, Robert J. Millette, P.E., P.L.S.
Civil Engineer and Land Surveyor
You must log in or register to reply here.