The popular Rigby Highland Stalker is now being offered in .300 Win Mag..
What’s the deal with the huge price increase for the new .300 Win Mag ($19,995.00 U.S.D.)
over the .275 Rigby and 9.3X62 at ($10,995.00) that’s like a 50% price hike. Is this a misprint?
The regular line Highland Stalkers (.275, 30.06 etc.) have offered a pretty good value for a production , semi custom
modern Mauser rifle . I almost bought one to match the Mauser Magnum that I have but went with a true custom build. The price of the .300 Win. Mag Highland Stalker now gets into the price of a true custom rifle by one of the top US master builders. Not sure what Rigby’s future plans are with the pretty popular Highland Stalker.
N

Chambering a Highland Stalker in 300 Win Mag is akin to paedophilia.

Lol when are they gonna come out with one in 6.5 Creedmore?

PLEASE HIRE ME!!!
Eagerly seeking Apprentice Professional Hunter work of any kind, anywhere for a reputable and ethical operator.

One of you gun making guru's need to comment on this. The base Big Game price is still $15995.

Well here it is, 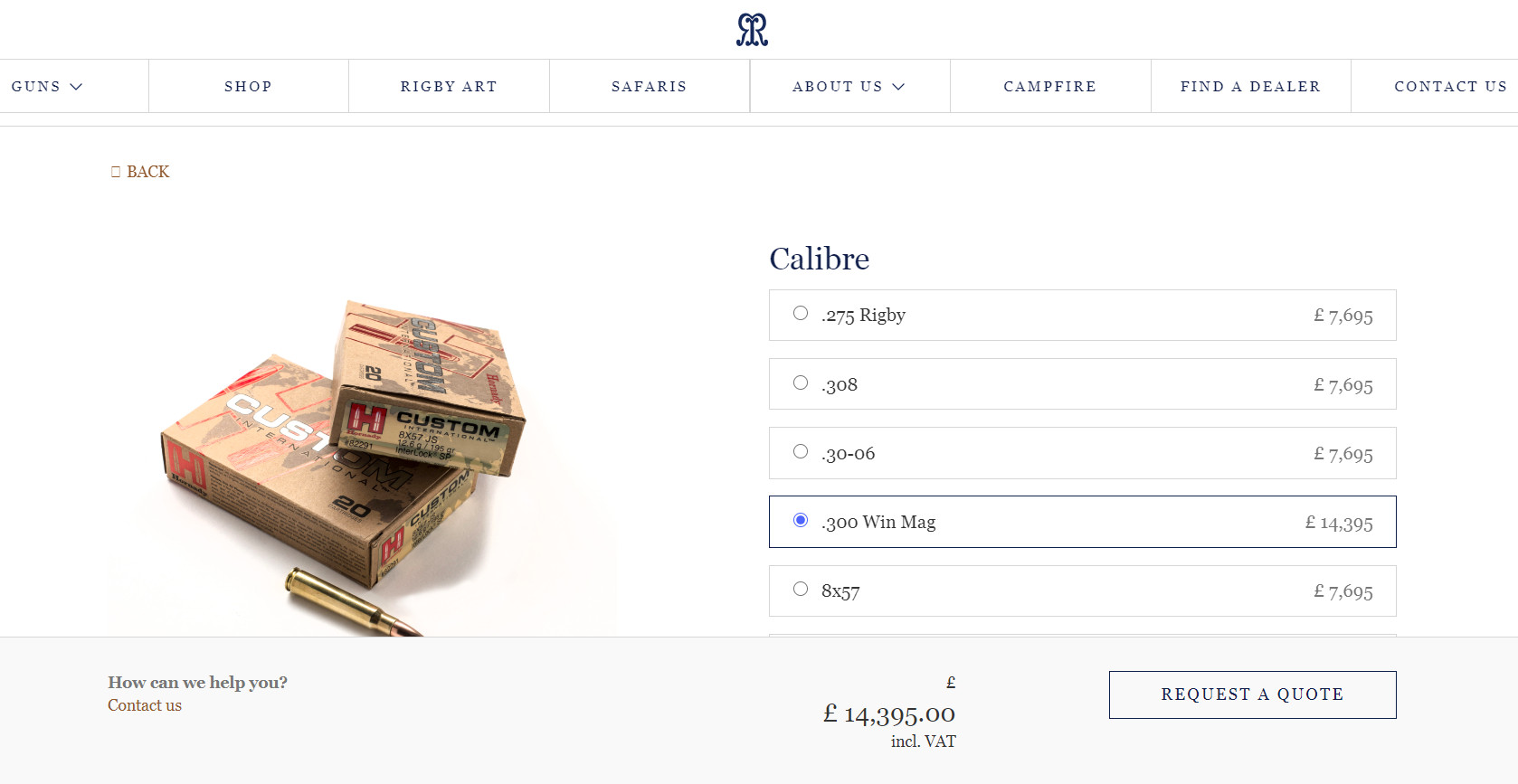 hot off the press.

I think it has to use a different action.
"We sleep soundly in our beds because rough men stand ready in the night to visit violence on those who would do us harm" American Novelist - W. Churchill

Would not the .300 Holland & Holland Magnum be a more fitting choice ? Especially since it is an English calibre ?

Professor Mawla said:
Would not the .300 Holland & Holland Magnum be a more fitting choice ? Especially since it is an English calibre ?
Click to expand...

The 300 H&H definitely would require a longer action.

Jeffrey said:
Lol when are they gonna come out with one in 6.5 Creedmore?

I posted pics of mine on a Rigby Facebook page and some guy wanted to know if it was available in 280 AI.

I think it's odd enough that they offer it in 308 Win.

ActionBob said:
I posted pics of mine on a Rigby Facebook page and some guy wanted to know if it was available in 280 AI.

I also thought 308 was a strange choice! I mean it's a great caliber, but not what you'd expect to see in an HS.

TOBY458 said:
I also thought 308 was a strange choice! I mean it's a great caliber, but not what you'd expect to see in an HS.
Click to expand...

If it does indeed require a new larger action surely it would make more sense to start a new model? Let the Highland Stalker be what it is. Give it an African name, like the Eland or something.
Carruthers

Kevin Peacocke said:
If it does indeed require a new larger action surely it would make more sense to start a new model? Let the Highland Stalker be what it is. Give it an African name, like the Eland or something.
Click to expand...

Good point. The price seems odd as the big game action would be more than sufficient to the task, and yet the .300 HS is priced higher than the Big Game?
N

ActionBob said:
The 300 H&H definitely would require a longer action.
Click to expand...

375H&H have been chambered forever (well, almost forever) in standard length 98s by opened the action a little at the front and thinning out the rear of the mag box. 300 H&H should be no harder to make work.

spike.t said:
Probably as I think a popular calibre in uk
Click to expand...

They obviously bought one out in 300 win mag to appeal to those in the US which is most likely their biggest market for the rifles.

Probably didnt do in 300 H&H because they are Rigby and didnt want to push the Holland & Holland, which i too btw thought made better sense and wouldve appealed to me to consider one.
B

price aside, the 300 win is a good chambering.
as is the 280ai or rem.
there seems to be a school of thought that you are not on a safari or doing certain kinds of hunting unless you use some obsolete cartridge.
nothing is further from the truth.
the brits were trying to develop improvements until they went down the gurgler.
in those times they were limited by bullet designs that would not handle velocity well in the 280 ross.
the only way to have reliable bullets then was to drive heavy bullets slowly.
with modern bullets the 280 ross would be de rigeur with some, but the 7mm rem mag is just a better cartridge in so many ways, and also better than the 7x57.
the 30/06 is a superb cartridge within its capability and far more useful than the 7x57.
the rigby rifles look good, although you seem to pay a lot for the name.
putting better cartridges in them just makes them better rifles, and possibly more all round useful for the dollar spent.
for those who want to pretend they are lord fontleroy on safari, and can afford the money just to play such games, by all means use obsolete calibres for the image.
for those more serious about the reality of hunting use the cartridge that does the job better.
bruce.
You must log in or register to reply here.