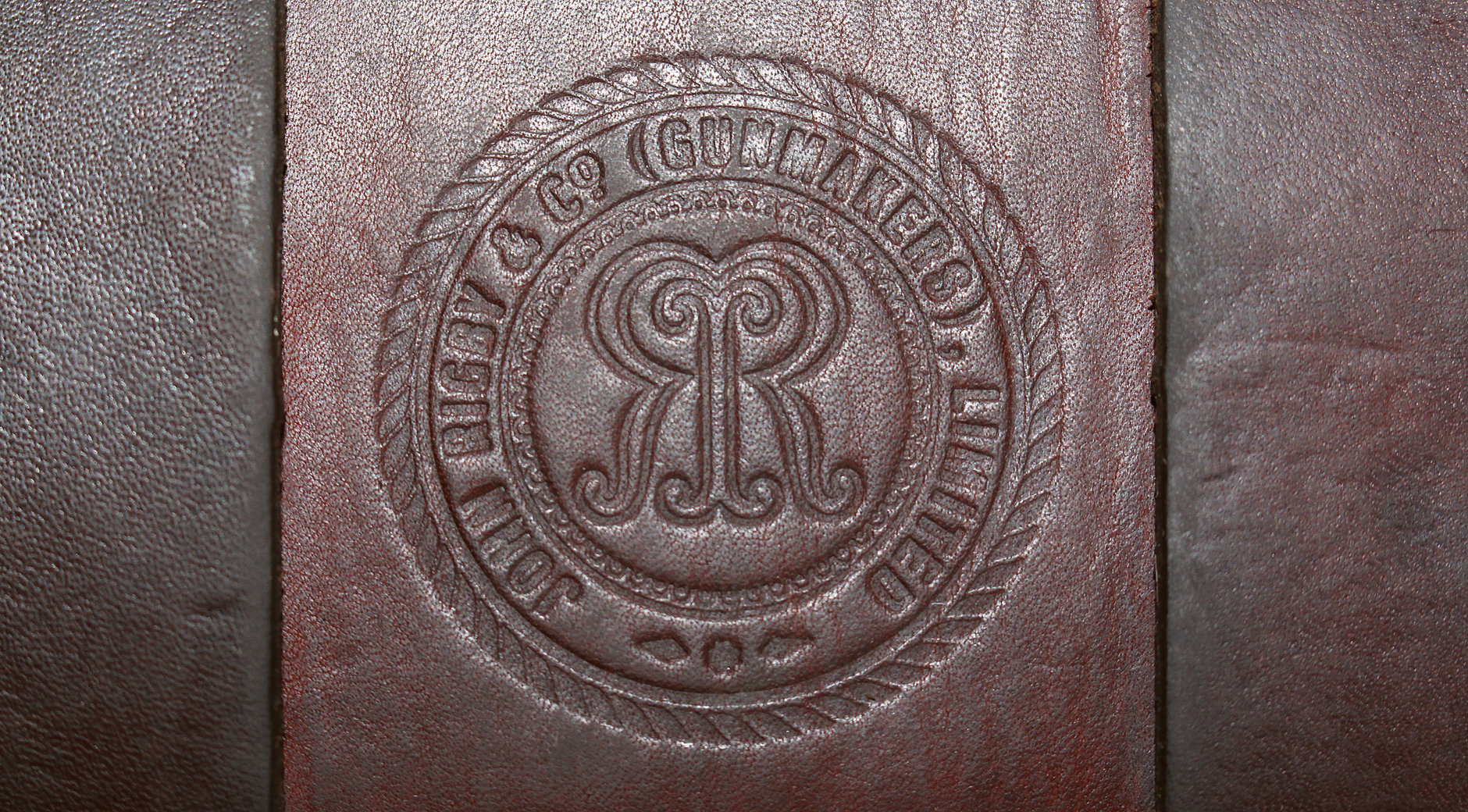 The History
In 1990 I was posted from Canada to Zimbabwe in south central Africa, thereby fulfilling
a lifelong dream to live in Africa. For most of my life, I devoured every book and
magazine article I could find that recounted African hunting adventures, explorations,
natural history and African peoples and their culture.

In the 1950’s and 60’s, Robert Ruark, a best selling American journalist, author and
hunter chronicled one of his long African hunts in “Horn of the Hunter” and then
produced “Something of Value”, a best-selling fictional tale of the Mau Mau revolt in
Kenya. Both books featured characters based on White Hunter Harry Selby who was
greatly admired by Ruark. He carried a 416 Rigby bolt action.

So here I was, an Africaphile and hunter headed for those legendary game fields and I
had to have a suitable rifle.

And after much thought and justification, I decided that it had to be a Rigby.

In 1991, on one of my regular trips between Canada and Zimbabwe, I stopped in on
Rigby’s office and workshop on Suffolk Street in London. The mahogany panelled show
room was as British as could be. And so was Piers Crump, who managed Rigby’s at the
time. After I explained why I was there, I listed my requirements for a suitable rifle. Piers
said they had just started one like that and he led me downstairs to the workshop to
show me a 416 rifle with the stock roughed out, the barrel and action fitted, but in the
white. In a split second I made my decision and we proceeded with a personal fitting for
me.

After the fitting, John Roberts, Rigby’s owner at the time dropped by for a chat. He
asked about the specs I wanted and he approved.

Several weeks later, the finished rifle arrived in Zimbabwe. It was indeed a handsome
and relatively simply embellished rifle; Rigby’s “Professional hunter” model. Stocked in
slightly figured Turkish walnut, it sported a 23 inch barrel, a concession to the brush
country that most of southern Africa is. And like Harry Selby’s rifle, it was chambered in
the famous 416 Rigby caliber.

After my first major hunt in the Makuti-Charara Safari area in the Zambezi Valley, I took
the rifle to Walter Roth, the Rigby authorized gunsmith in Harare for a few tweeks.
Walter re-hardened the safety and installed a larger white bead on the front sight made
from warthog ivory.

The rifle proved to be deadly with Barnes X and Speer Grand Slam premium bullets in
hand loaded brass. 350 and 400 grain bullets grouped within the same 2 inch circle at
100 yards and penetration on buffalo was excellent.

During the next 15 years I used it as my primary rifle in Mozambique and Zimbabwe and
as a back-up on my hunting concession is Zimbabwe.

For hunting large plains game and the dangerous sorts, it is difficult to trump the Rigby
in 416. It is both an enduring icon and “the best of the best” in the African game fields. 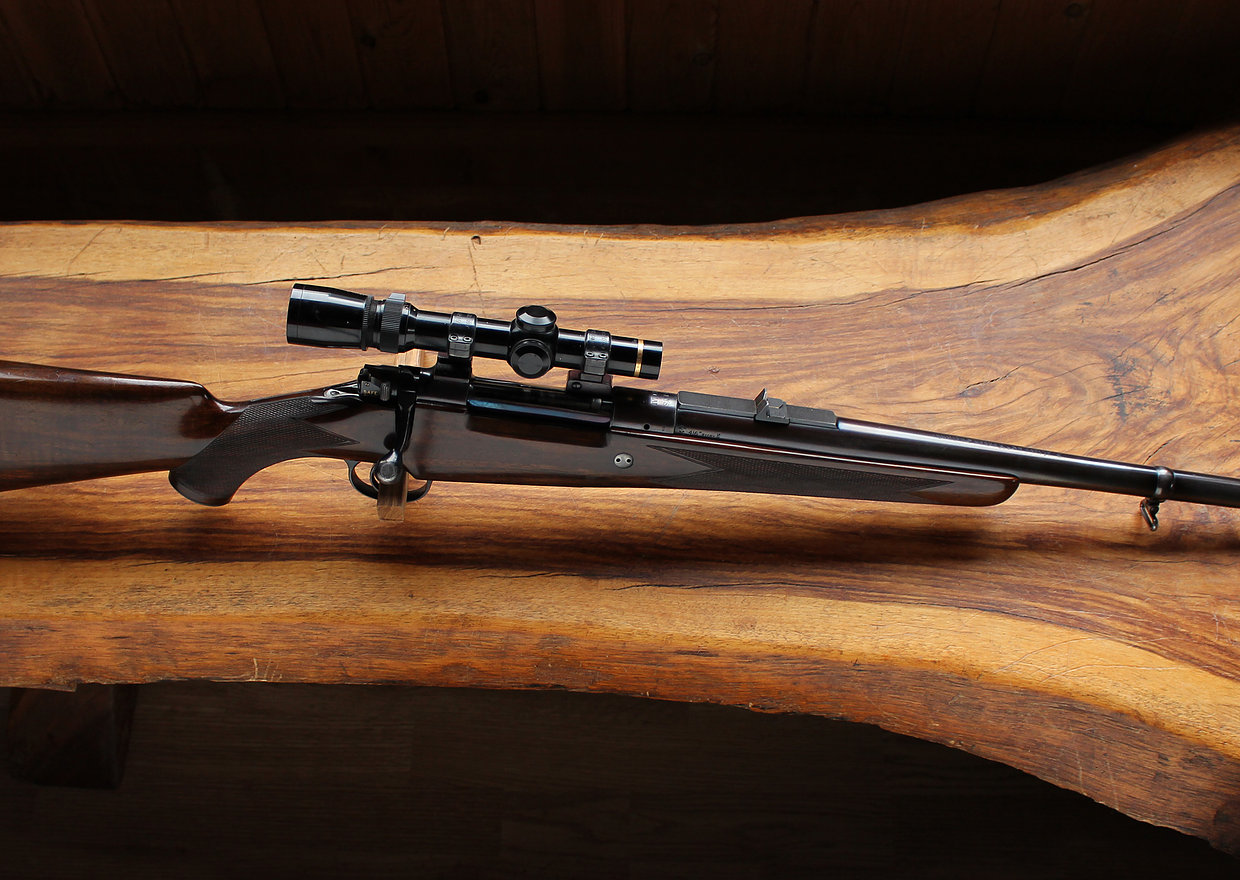 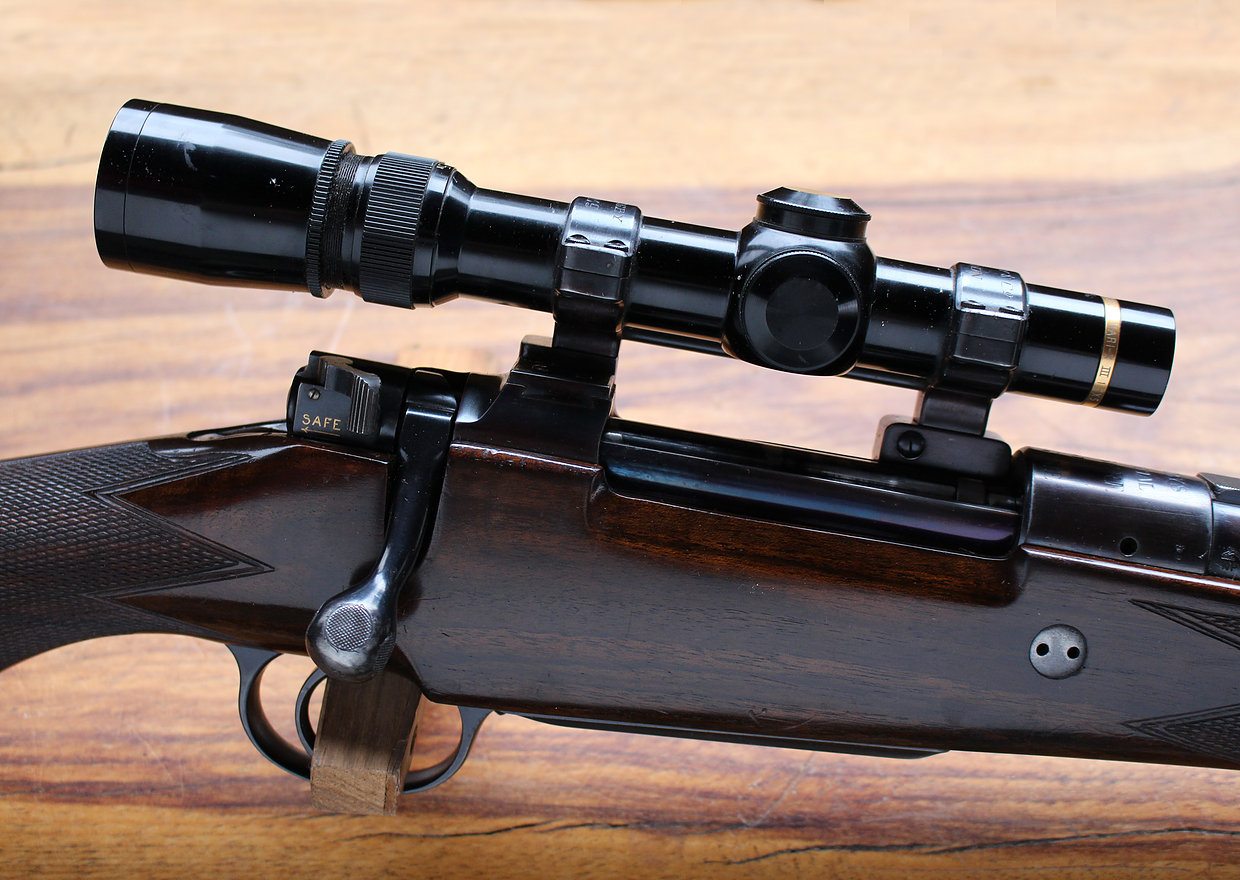 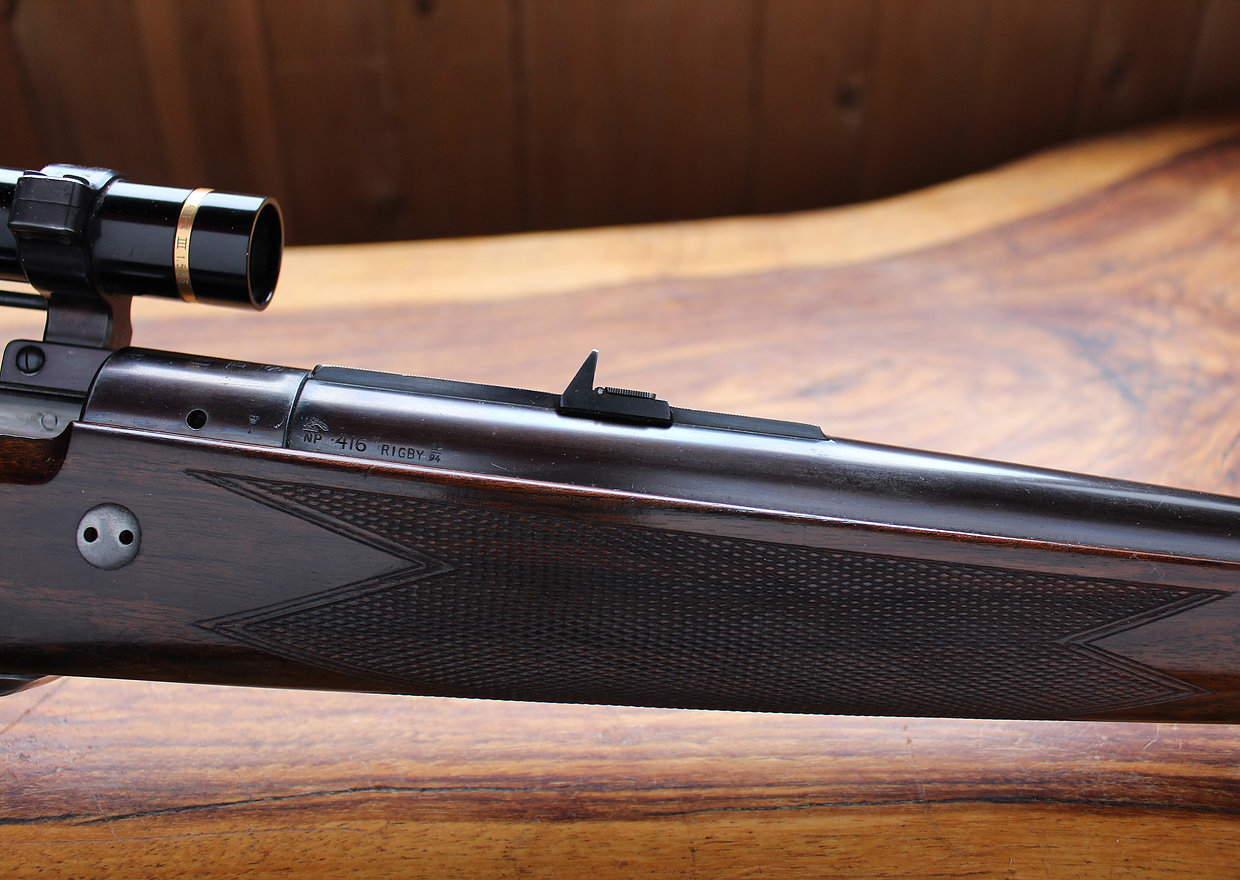 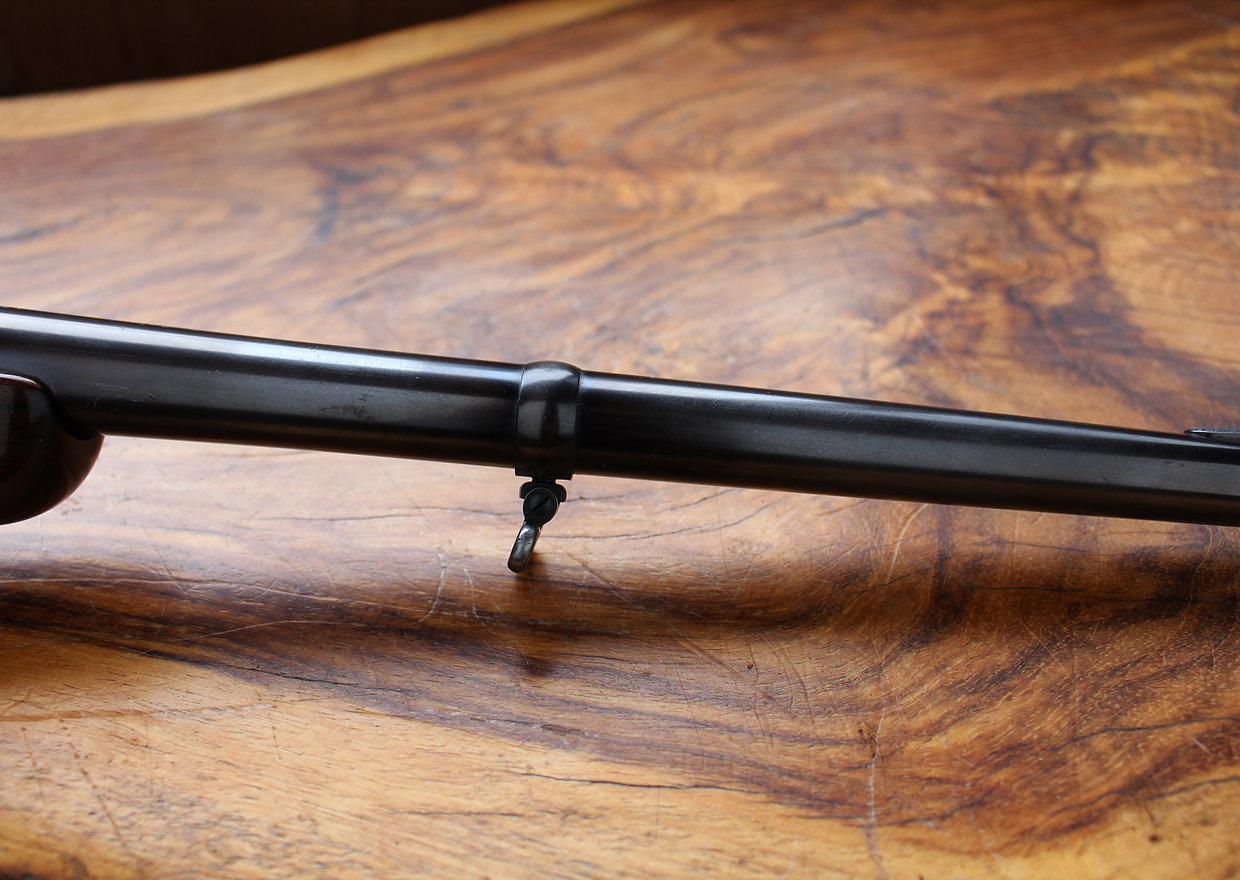 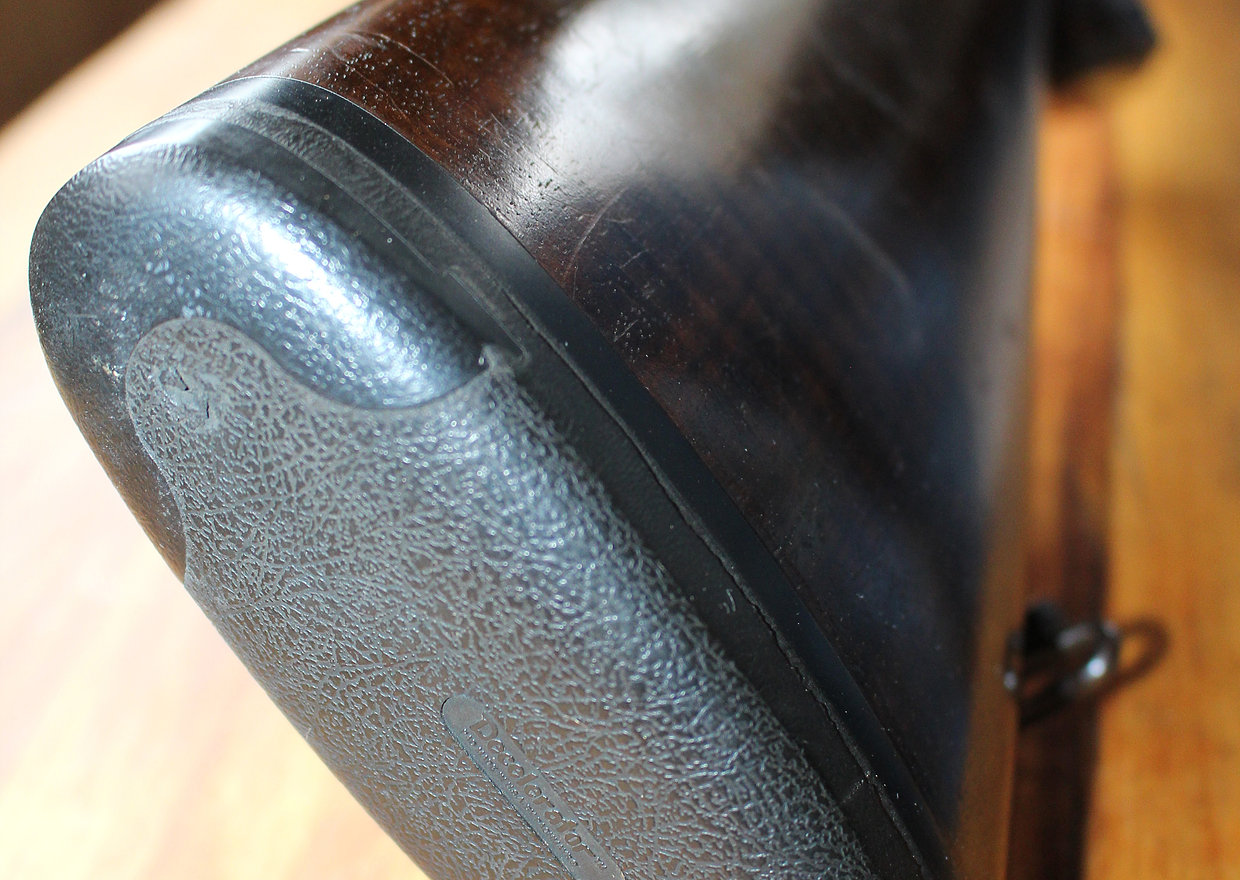 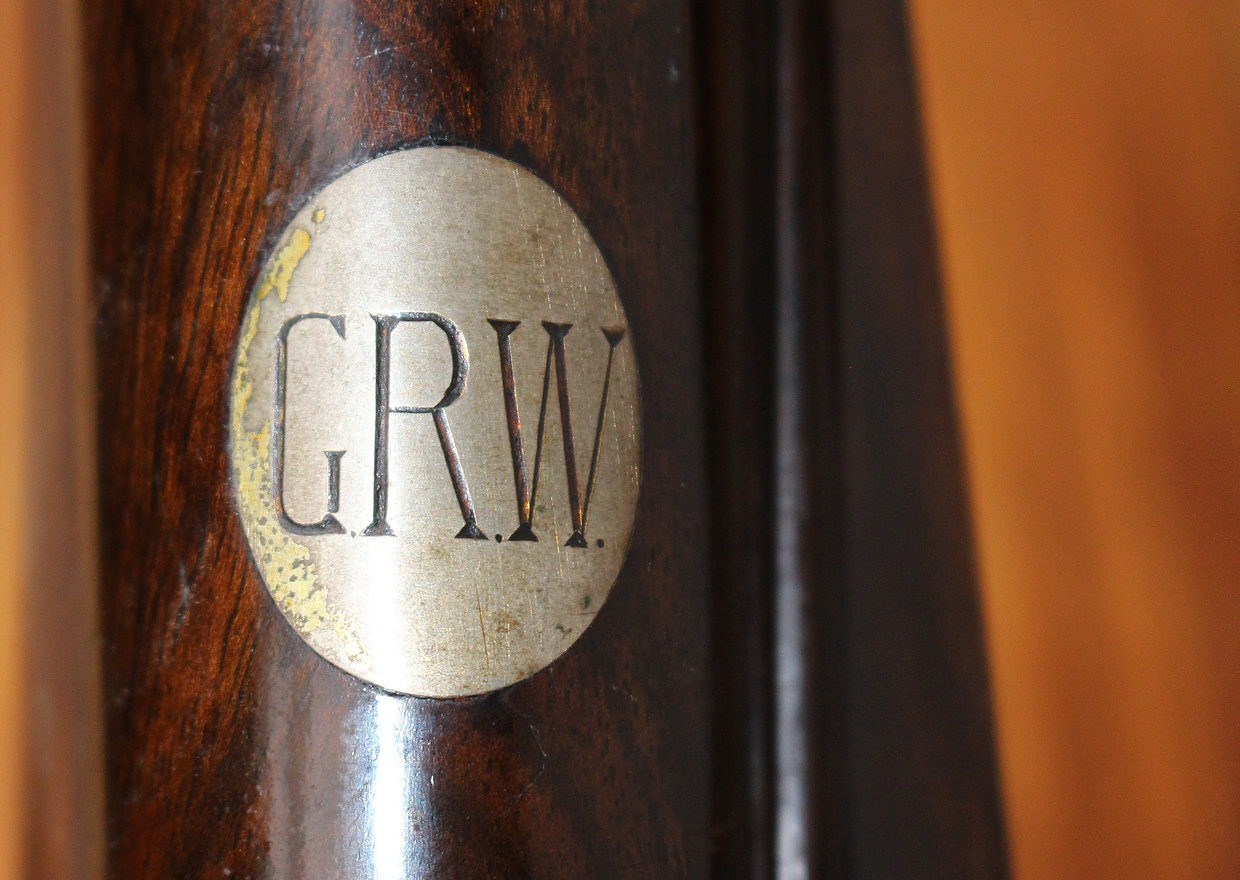 My initials engraved on sterling plate under the butt stock. 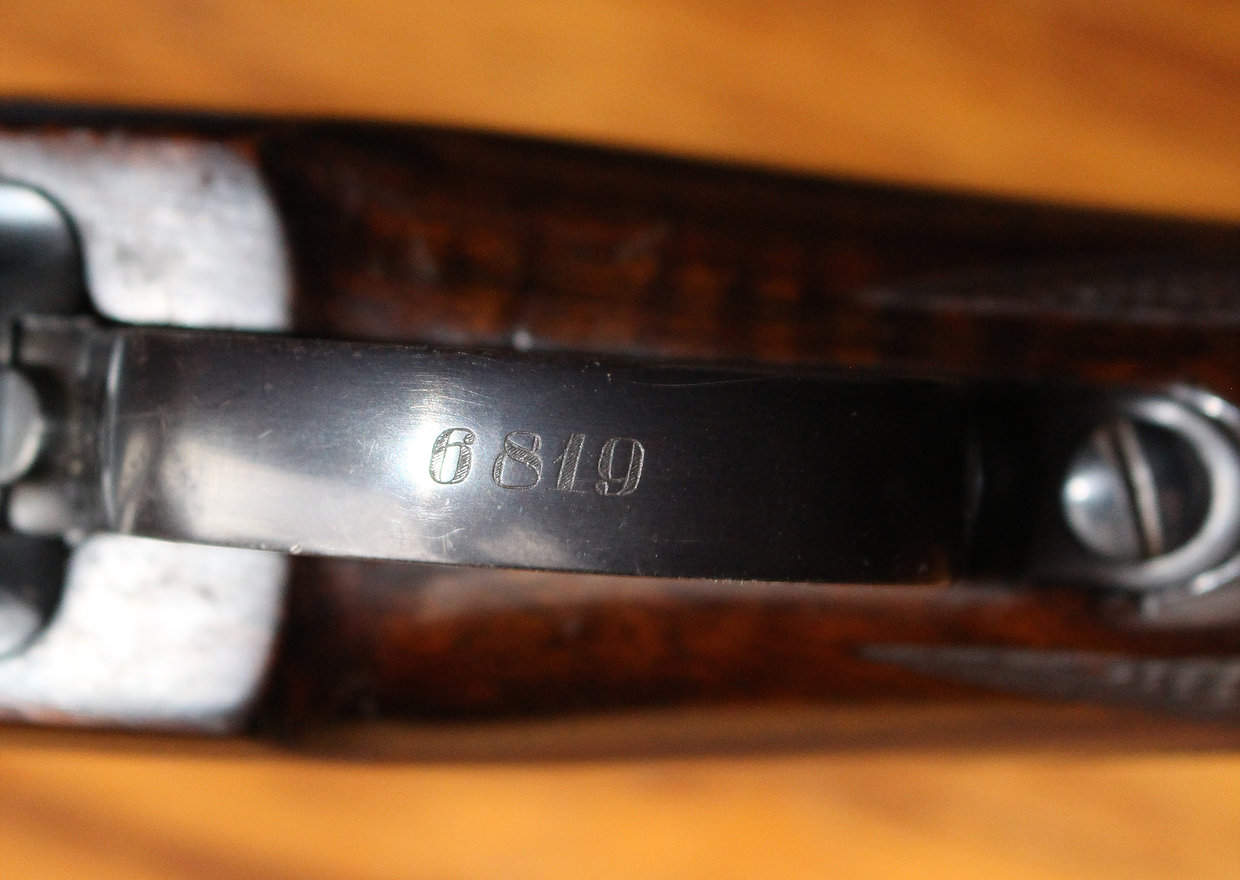 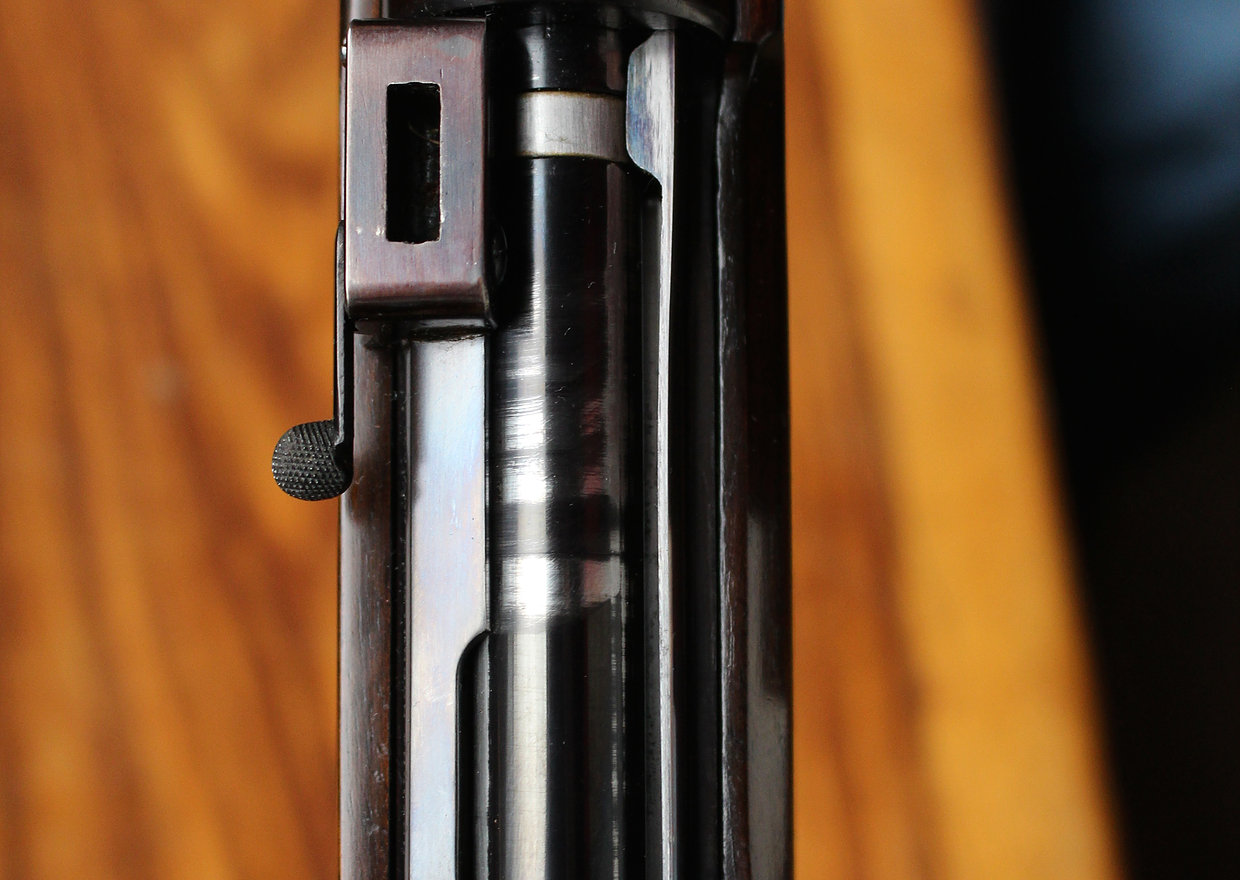 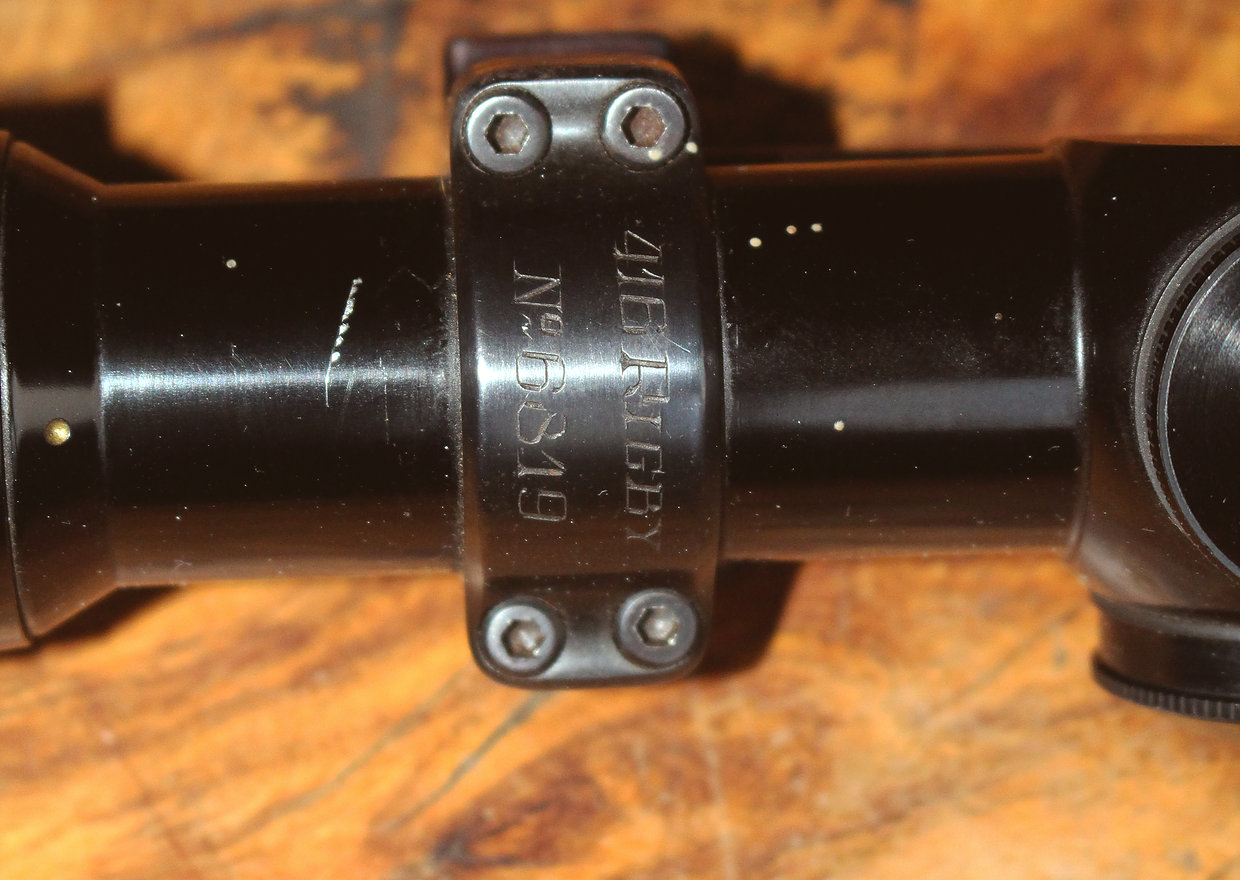 Leupold 1.5 to 6 power scope removed from rifle with rings mounted. 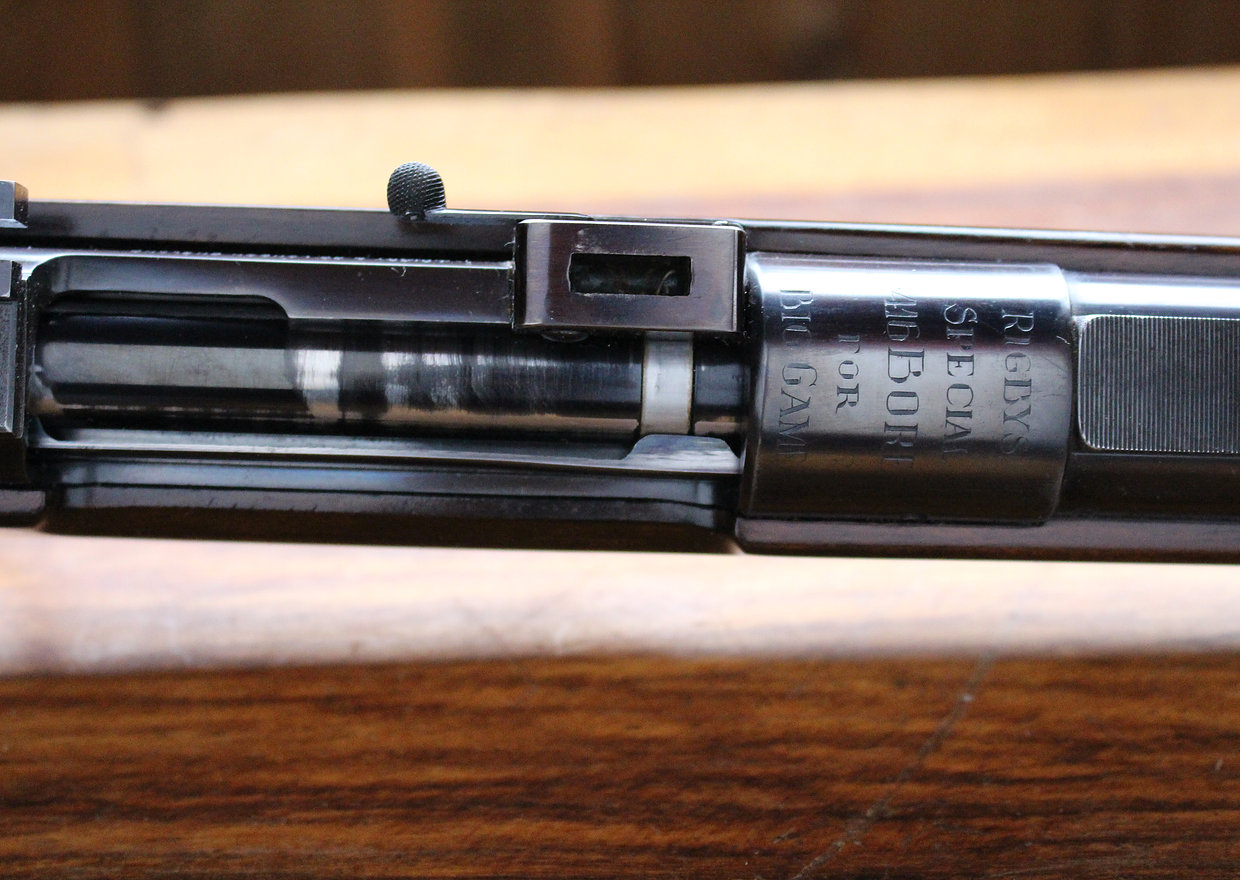 Engraving on top of receiver. 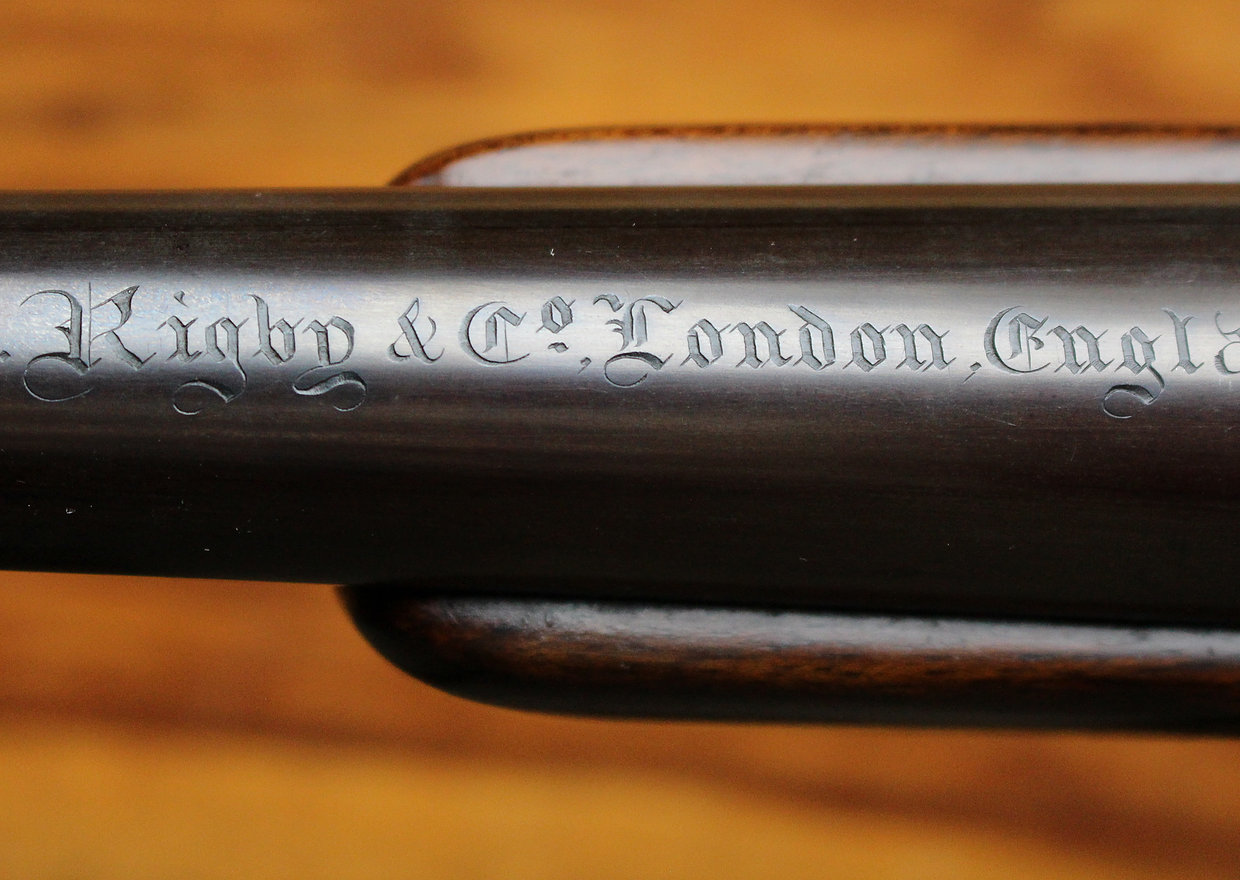 Engraving on top of barrel. 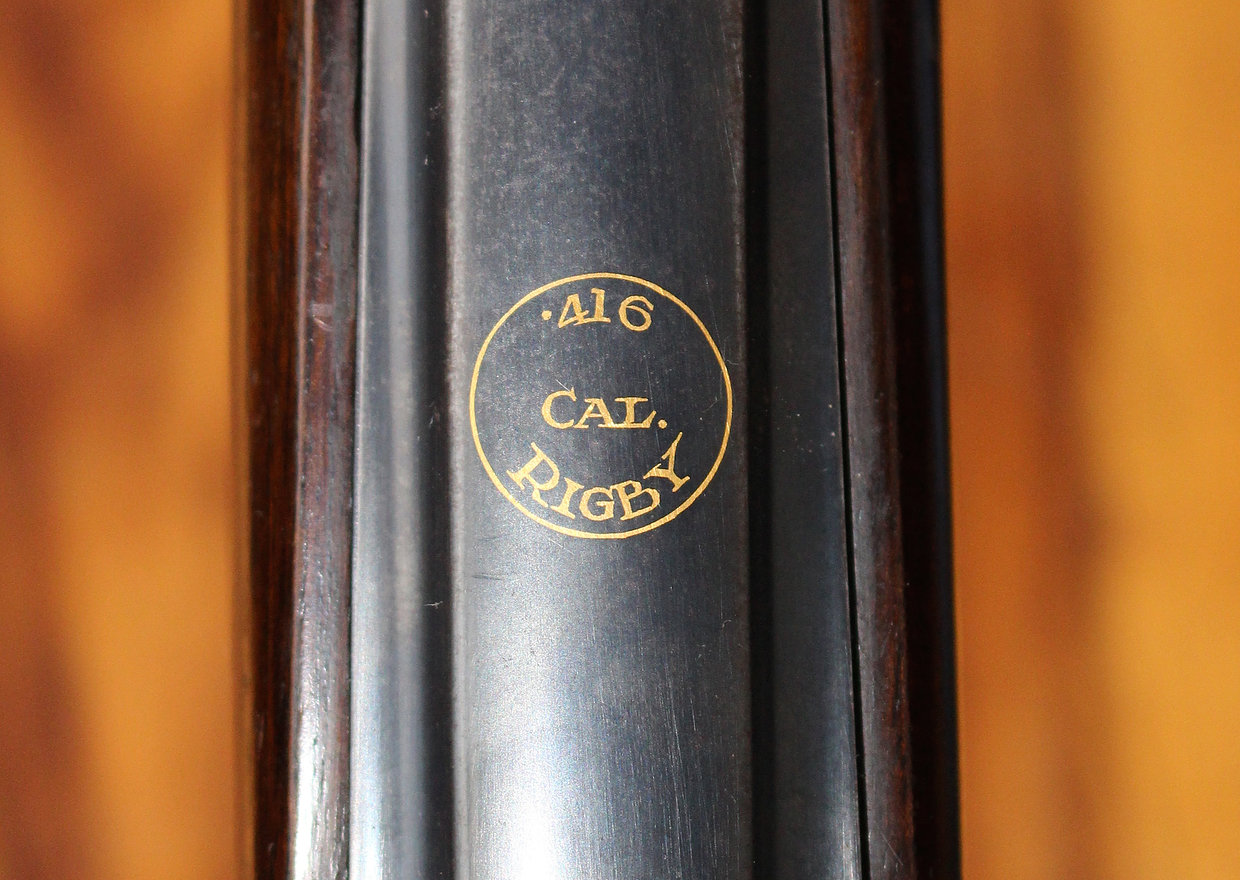 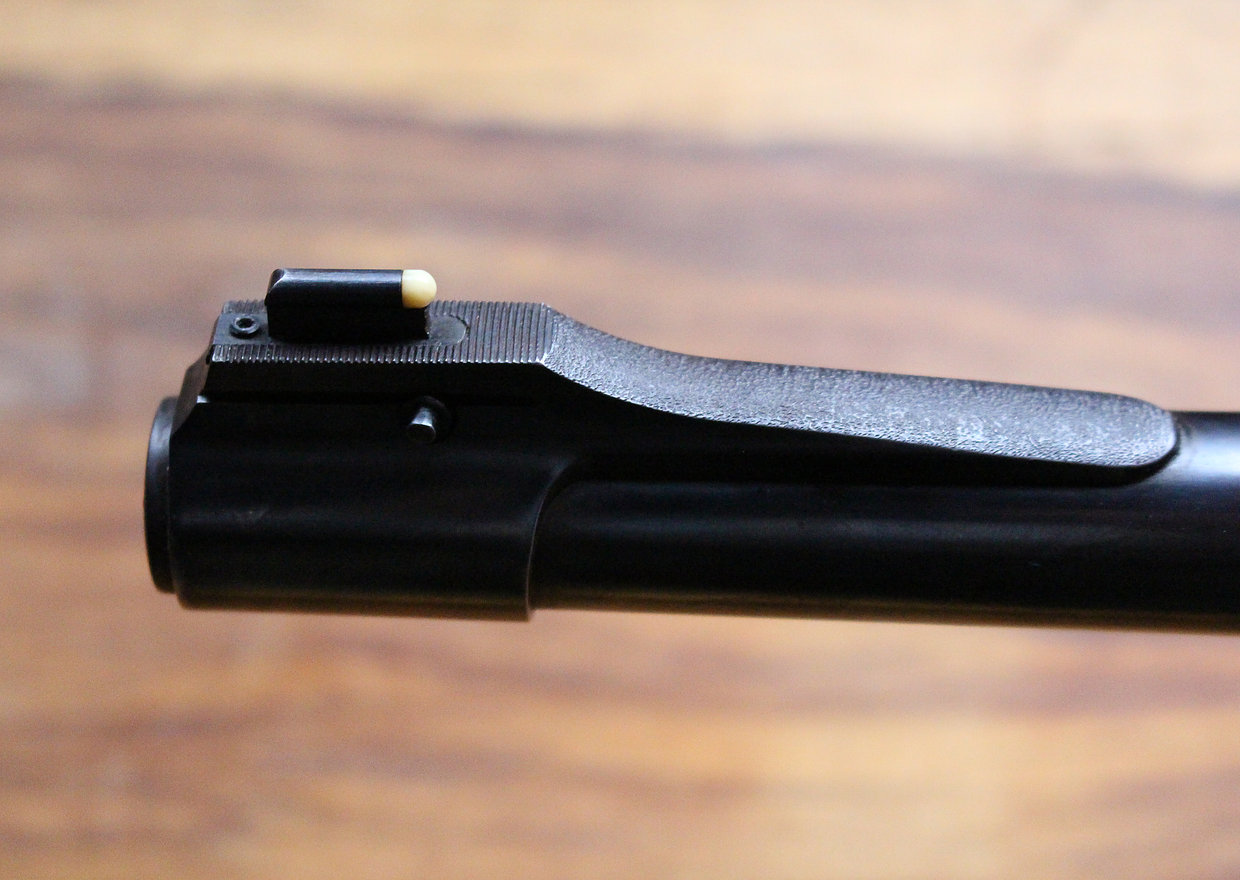 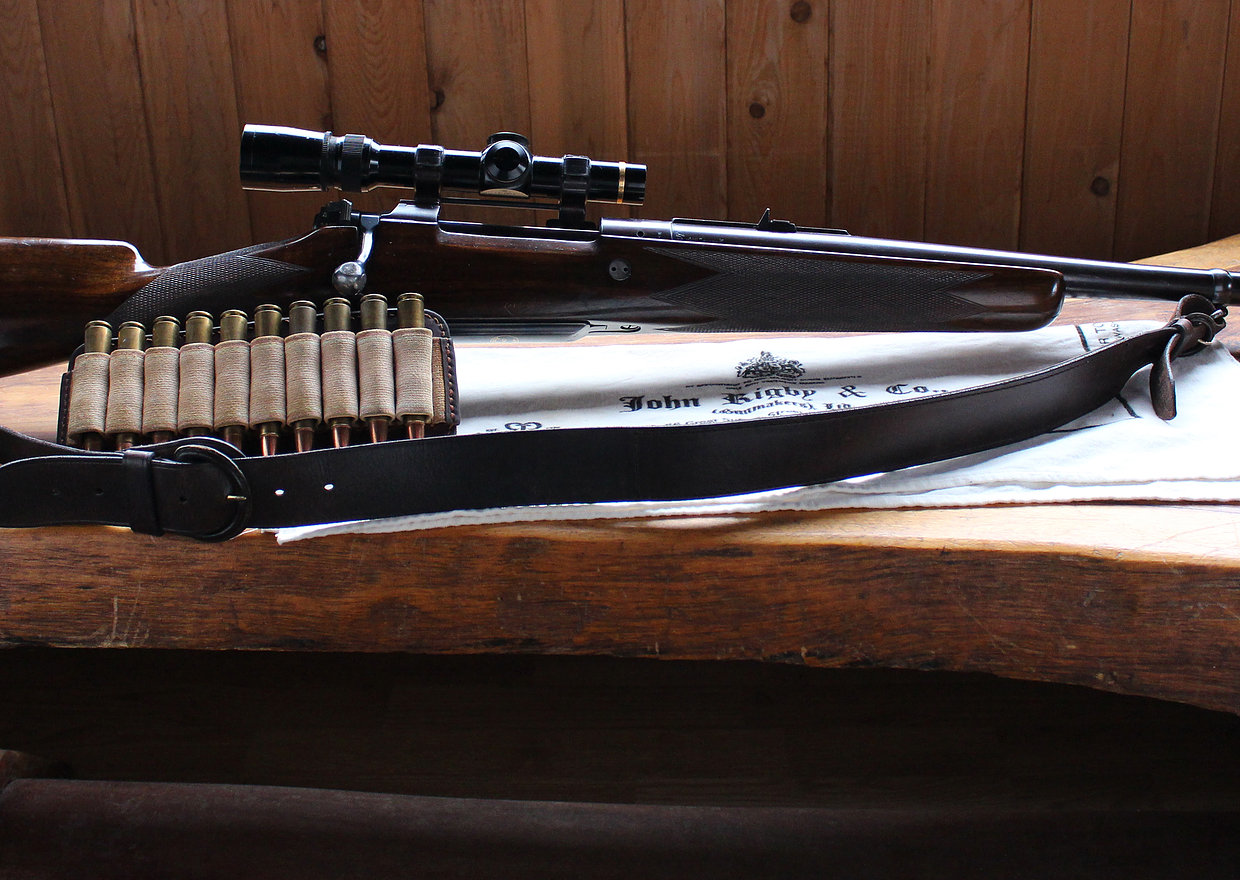 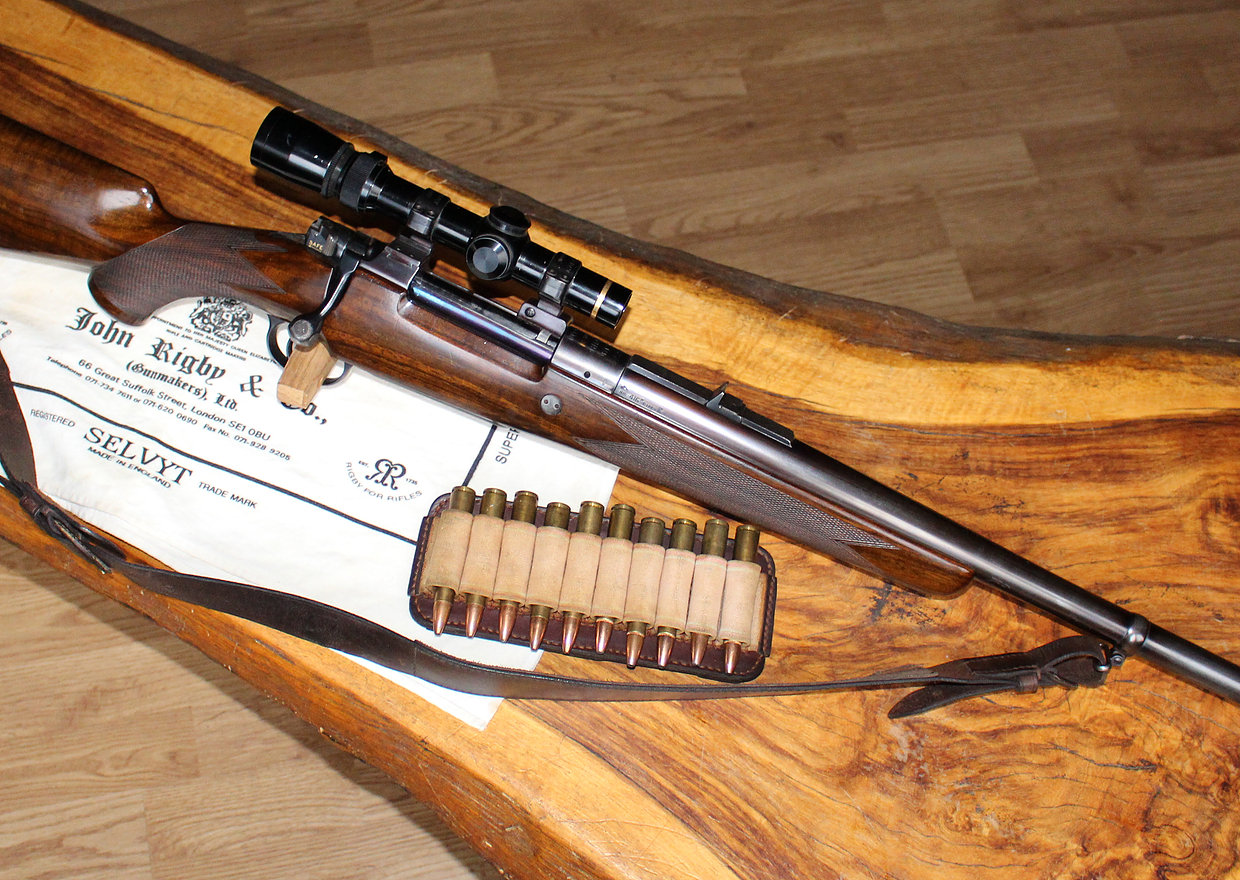 Another view of full field kit. Not shown are a set of reloading dies. 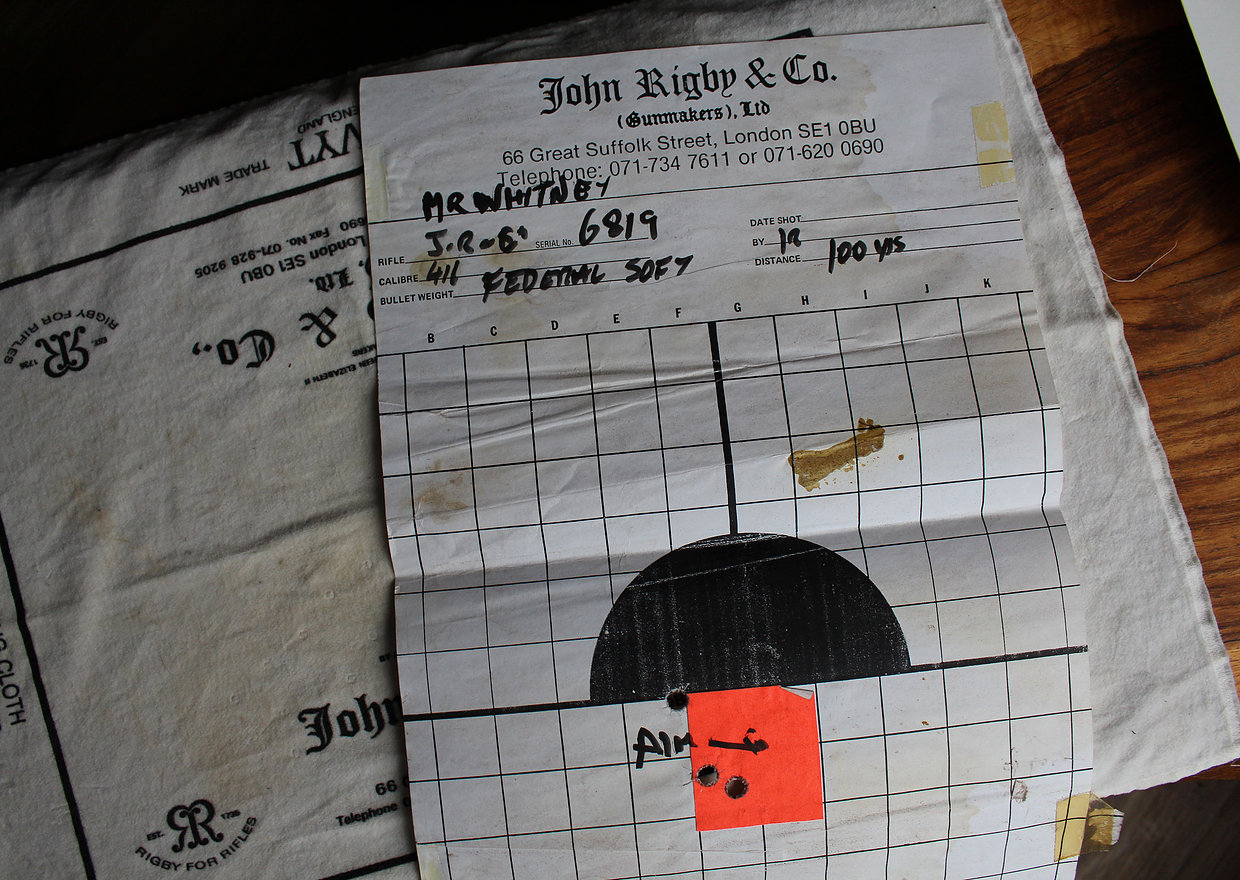 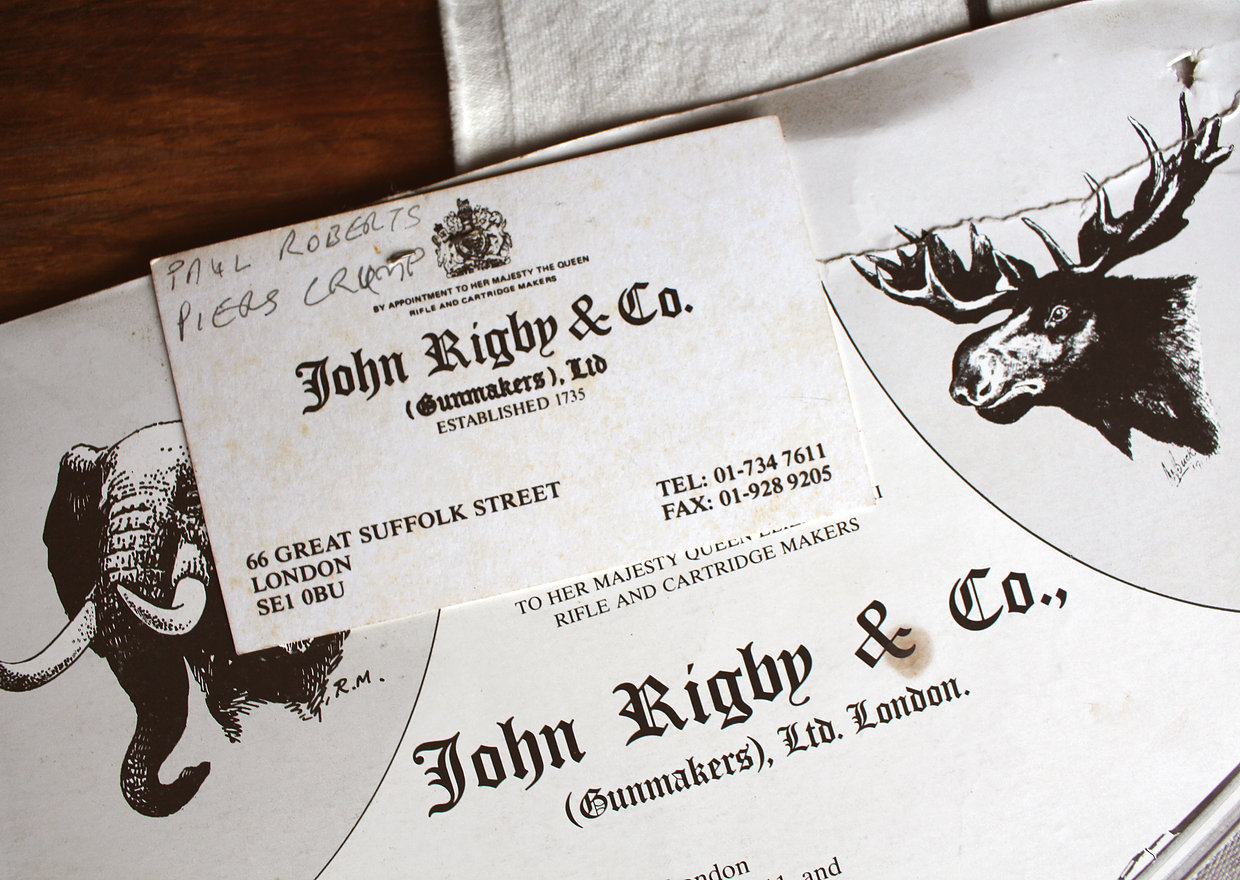 I met with both Paul and Piers on my first visit for a fitting.

@rookhawk ...Value estimate? Since it is obviously a SSB, what type of scope mounts are those, other than installed by Rigby. Is the scope still centerlined above the barrel using offset rings? I'm not sure how that works.

The mounts are occasionally called 'mannlicher style'. They are center lined. Don't ever shoot it off a lead sled and you'll be fine.

If the stock were longer I'd be tempted to buy it to leave in country in Zim.

Point of clarification: where is the gun now?

@sierraone if you PM me privately I'll tell you what I think it's worth. (Prefer not to answer here) It's a very nice working gun.

I'm pretty sure spiket knows what it's worth too.

That is a righteous rifle for sure! I am not a buyer, wish I could be. Just enjoyed looking at the pics.
S

rookhawk said:
It's nice. It's right. It's real.

The mounts are occasionally called 'mannlicher style'. They are center lined. Don't ever shoot it off a lead sled and you'll be fine.

If the stock were longer I'd be tempted to buy it to leave in country in Zim.

Point of clarification: where is the gun now?

@sierraone if you PM me privately I'll tell you what I think it's worth. (Prefer not to answer here) It's a very nice working gun.
Click to expand...

Thanks for the comments. The rifle is currently in Canada.

It is a beautiful rifle! All the best in selling it! I don't think I could part with one like that.

lovely rifle , GLWS
on the ocean or in the bush.

Damit! I cant get a break.

Would have taken it no peoblem if it was here or in Zim.

rookhawk said:
It's nice. It's right. It's real.
Click to expand...

The single claw side mount is preferred by the Brits for some unfathomable reason - less intrusive (and expensive) I presume than a standard claw. It also works. H&H puts the same mount on their finest bolt guns today https://www.hollandandholland.com/gun-room/bolt-action-magazine-rifle/ . It is, indeed, similar to the old Mannlicher Schoenauer claw - at least with respect to the rear mount. The Schounauer has a split rear receiver and so the rear mount had to ride on the left side. Front mount was a standard claw and the scope was centered. The Brit version offset both front and rear, eliminating the need to inlet the mount into the front of the action. Hence a cheaper solution. But it does work very well.

That appears to be an excellent rifle, and it is an English product - not one of the Paso Robles one offs.
Last edited: Feb 7, 2017
"We sleep soundly in our beds because rough men stand ready in the night to visit violence on those who would do us harm" American Novelist - W. Churchill

I think we'd need to go to the footage because my words are a bit more nuanced than your synopsis.

It's a John Roberts gun it appears? It will surely be a decent working tool. It is obviously not a between the wars golden era gun. Someone will be happy to own a nice working rifle at the end of this thread. If you'd like to banter about which guns are more collectible let's bicker on nuances of such like proper art enthusiasts via PM and not on the gentleman's ad. We aren't doing the sale any benefit by you proclaiming how good your guns are or me saying how much better pre-war guns are. Neither of those are for sale here. So let's not jack his thread.

I PM'd an offer that I believe was full retail value on the rifle. It was within $~100 of what another Rigby aficionado thought it was worth on this forum.

I heard no response of any kind?

+1. Maybe the current owner decided to keep it or wasn't happy it's not as valuable as he thought. Would still like to know though!

@sierraone i think you may be spot on with the value not being what was imagined.

Hope he gets back to you Rookhawk!

Great rifle.
Witold
You must log in or register to reply here.