Today was opening day for Buck Pronghorn in Colorado. I went out to what I thought was "private" land. The hunting club I joined leases it. They apparently have no limits on how many hunters they let out because there must have been 40-50 hunters on a 4 mile x 4 mile ranch. Sounds like a lot of land but when it's open and flat you can see everyone it's not. I didn't sen see any Pronghorn but I saw a lot of orange......

I soon realized:
1. There was no way to take a safe shot.I had hunters (and cows) all around me, 360 degrees. Aa .30 caliber bullet can easily travel 2 miles. There is nothing to stop it.

2. The other 40-odd hunters were all around, 360 degrees, so I realized that if one of them saw a Buck he/she could be aiming right in my direction thinking "800 yards is safe" or not even paying attention as Buck Fever took hold.

3. If any Pronghorn actually showed up the first shot would scatter the rest and they would learn quickly what was coming at them from all that Orange.

Sorry to hear that. That is exactly why I never hunted public land in Oklahoma during rifle season...

cagkt3 said:
Sorry to hear that. That is exactly why I never hunted public land in Oklahoma during rifle season...
Click to expand...

The sad part is this was Private land but they it had it opened up like public land.......

markferrigno said:
The sad part is this was Private land but they it had it opened up like public land.......
Click to expand...

Even worse...I pay for a lease her in TX and at least everyone is pretty respectful while hunting (with one exception where some quail hunters started driving around in their side by side while I was bowhunting). 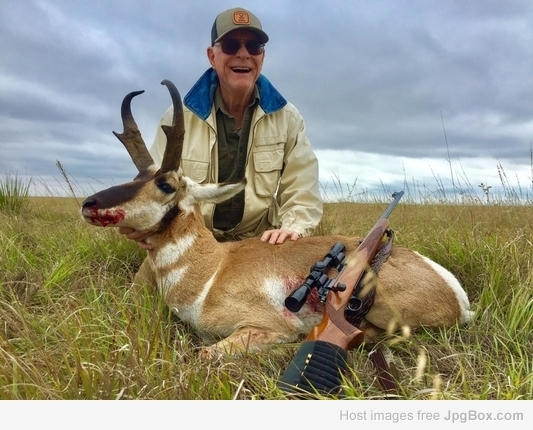 Sounds like a dove shoot with centerfire rifles. No thanks.
M

Several years ago I was still hunting and jumped a doe mule deer and her fawn. It ran towards a saddle in the mountain about 200 yards up the hill from me. It just happened a hunter and his guide were coming around the hill and the doe runs right in front of them. The hunter dismounted and started trying to get his gun out of the scabbard. About the time the deer went overtop it pulled free and he started aiming but didn’t shoot. I counted 17 hunters within 300 yards he could have shot if he would have been fast enough in getting the gun out. I left that mountain then and there and have not been back. Scary!!

That's one reason that I have given up hunting on opening day or even opening weekend. After a couple of days everyone has gone home and you pretty much have the area to yourself. The animals may be scattered but give them a day or so of piece and quiet and they'll be right back together.
If you don't care where you are, you are not lost.
C

Very sorry to hear this about your hunt. When your hunting private land, you shouldn't expect what you experienced. The number of hunters should have been much more limited.
Wow! Just realized this thread is from 2018! I'm sure there would be fewer hunters there now? LOL

While there is very little public land in eastern Colorado, getting permission to hunt antelope is still very easy as a lot of ranchers see them as another drain on limited grass; 5-6 antelope=1 cow roughly. Unfortunately, the State Trust Land Board has decided to squeeze another dime out of the land they manage. Access used to be granted by the lessee. Now, if the lessee allows hunting, they will be charged an additional "Recreational Lease" fee, which starts at $2.25/acre/year, $1440/section; could be more depending on the property. This closed a bunch of single sections or partial sections to hunters. Can't even allow family to hunt or they risk the extra fee. Conservatively, I estimate I lost access to over 100 square miles that I used to hunt as some landowners shut down their private land as well due to fences that don't always define which is public and which is private.
Anyone can apply for that same Recreational Lease on STL and the rancher trying to raise a living has no say in who is out there leaving their gates open or damaging things like stock tanks and windmills. The larger, contiguous blocks of STL are getting leased by the DOW and opened to the public. Those look just like the OP described in his hunt on opening weekend.
Fortunately for me, I know enough large acreage landowners that I can still find parcels that aren't covered in orange opening day. As @JimP noted, hunting after the weekend leaves most land mostly empty of other hunters, and antelope that are a bit skittish.
This year will be less of an issue for me and my Granddaughter as we drew late season doe tags. December sees a lot less pressure than the first weekend of October.

What the OP described sounds like the hunt club in Hanover. Don't think they have changed how they mange it as I have heard the same story about it for years. They did pick up some more land, but it's open to any member with a tag, and it gets crowded.
Life's too short to hunt with an ugly gun
I

Any of those mentioned will do just fine.

I wouldn't buy a magnum just to hunt goats. If you have one and shoot it well, then it's a viable option.

The most important item is your being comfortable with it and shooting it well. Antelope die easy when hit properly.....:twocents:

John Camp,
Maybe on some private land but not where I hunt.
The outfitter provides guides and they spread the hunters out across several different properties, some miles away. There is a lot of open, flat land in that part of Texas, NM, OK, and Colorado. There is also a lot of game there.
CRS, NRA Patron Member, DRSS, DWWC, TSRA, Whittington Center,
Android Ballistics App athttp://www.xplat.net/
You must log in or register to reply here.