Please pray for us

Hi everyone.
Please Pray for South Africa so we can receive rain we are in a serious water crisis in cape town and serounded areas we seriously need water for everything and the animals around us. Thank you for all the support.

I will indeed pray for rain for South Africa. I have been praying about the government situation as well. God is sovereign.

I hope the rains come soon.

Drought is a real bitch. Nothing you can really do about it. I'll ad my prayers to others here.
Bruce

Done!
Africa on my mind.

Hoping for some rain soon.

Thank you all for praying our dam levels are on 14% now by end of march we will have no more water and our raining season starts only may last year we had no rain :-(

Until a week ago we had the worst drought we can remember in central/south Spain, now we are going through severe snowstorms.

Weather is like this, so lets hope for the best, and may you have lots of rain ! 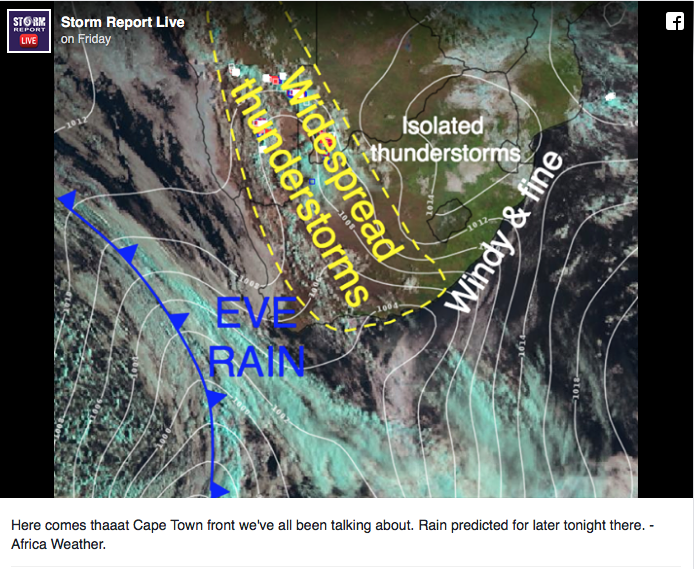 Something to keep the dust down.

I hope things work out for you.

Wherever I go they call me Rainman!

Sorry about the drought. Many large cities have NEARLY run out of water...................but Cape Town will likely be the first. No one knows exactly what will happen, but many elderly and young will suffer most. I don't expect things will go well in predominantly white neighborhoods either, for various reasons. And there is an elephant in the room. Addressing the infra structure of water storage would have gone a long way toward mitigating the problem, even though rainfall amount is the primary culprit. And as for increasing rainfall....Wiki says cloud-seeding, praying, and rain dances are the only three methods commonly practiced now. It fails to say which is most efficacious. The surging human population on Earth means it is not IF we run out of resources such as water, but only WHEN. Cape Town had a population of about half a million in 1945, crested one million in 1967, two in 1986 and 4 million in 2016. And that is the elephant in the room.......the topic no one mentions whenever a humanitarian crisis emerges. It can only be dealt with proactively, or catastrophically. I hope not the latter. I will both pray and dance in effort to help. Other cities are sure to follow. Elephants require a lot of water. ............FW Bill

Saw where some of the NW Provence got some good precipitation.... hopefully far & wide....

Praying you get rain. Here at my farm in Kansas it has been the driest winter that I have ever seen. If we don't get some form of moisture the dust storms will happen this spring.


The Cape Town water crisis in South Africa was a period of severe water shortage in the Western Cape region, most notably affecting the City of Cape Town. While dam water levels had been declining since 2015, the Cape Town water crisis peaked during mid-2017 to mid-2018 when water levels hovered between 15 and 30 percent of total dam capacity. In late 2017, there were first mentions of plans for "Day Zero", a shorthand reference for the day when the water level of the major dams supplying the City fell below 13.5 percent.[1][2][3] "Day Zero" would herald the start of Level 7 water restrictions, when municipal water supplies would largely be switched off and residents would have to queue for their daily ration of water, making the City of Cape Town the first major city in the world to potentially run out of water.[4][5] The water crisis occurred at the same time as the still ongoing Eastern Cape drought located in a separate region nearby.

The City of Cape Town implemented significant water restrictions in a bid to curb water usage, and succeeded in reducing its daily water usage by more than half to around 500 million litres (130,000,000 US gal) per day in March 2018.[6] The fall in water usage, combined with strong rains in June 2018, led dam levels to steadily increase, and for the City to continually postpone its estimate for "Day 0".[7] In September 2018, with dam levels close to 70 percent, the city began easing water restrictions, indicating that the worst of the water crisis was over.[8] Good rains in 2020 effectively broke the drought and resulting water shortage when dam levels reached 95 percent.[9]
R

I pray for you! I pray for peace in this world!
You must log in or register to reply here.