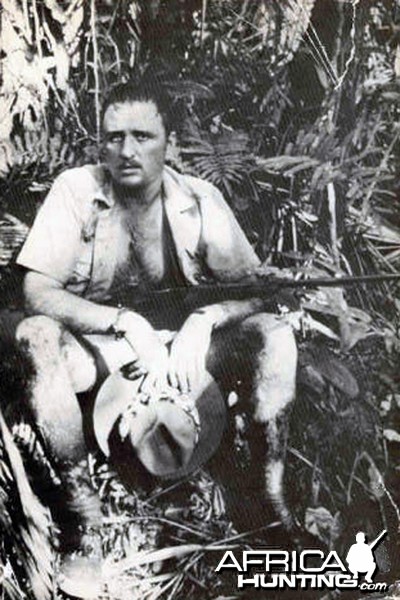 Peter Hathaway Capstick was a famous American hunter and author. Born in New Jersey and educated at the University of Virginia, he walked away from a successful Wall Street career shortly before his thirtieth birthday to become a professional hunter first in Central and South America and later--and most famously--in Africa. Capstick spent much of his life in Africa, a land he called his "source of inspiration."Though he spent decades hunting some of the world's most dangerous game, his death did not come from a lion's jaws or an elephant's tusks. A chain-smoker and heavy drinker, he died at the relatively young age of 56 from complications following heart surgery. 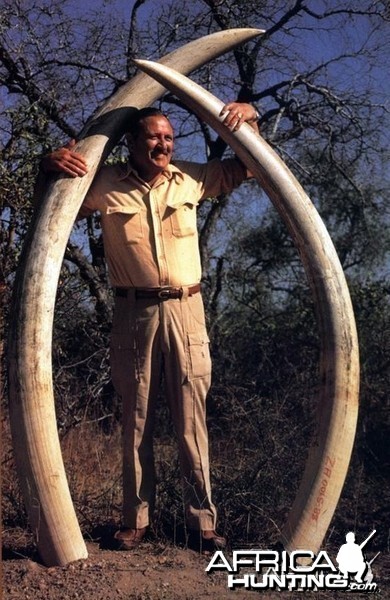 Peter H. Capstick with the tusks of the famous elephant, Phelwana, which had to be destroyed in Kruger National Park after being injured through unknown causes. The tusks weigh 158 and 141 pounds respectively, making him the largest tusker ever recorded in the region.

After a short career as a Wall Street stockbroker, Capstick headed to Latin America. There he traveled widely while hunting, fishing, and mastering the Spanish language. After a few years he returned to New York, where he founded a business arranging professionally guided hunting trips. Shortly thereafter he took a position as hunting and fishing director of Winchester Adventures of New York, a subsidiary of the famous gun manufacturer. In that capacity he made his first trip to Africa in 1968 . Subsequently he began working as a professional hunter and game ranger in Zambia, Botswana, and Rhodesia. 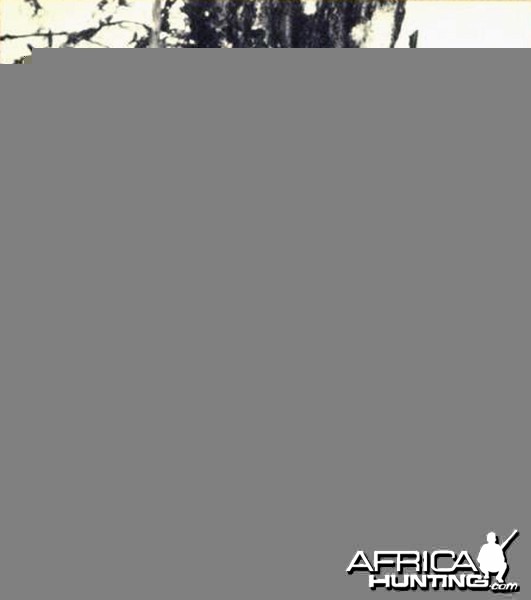 Capstick started writing about his adventures in the late 1960s and soon published numerous articles in various sporting magazines. In 1977 he published his first book--Death in the Long Grass which became a major commercial success and established his reputation as a teller of hair-raising true adventure stories. He subsequently went on to become the world's best selling hunting author with a string of books detailing his own adventures as well as those of other well known hunters. 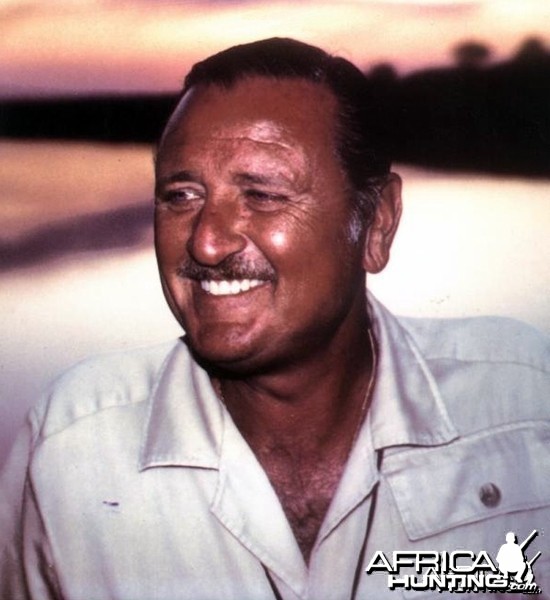 Capstick's name frequently comes up in the same breath as Hemingway's and Ruark's in discussions of influential African hunting authors. But like all good storytellers, some have questioned Capstick's use of "literary license" in embellishing his stories. Nonetheless, his abilities as a riveting storyteller and creative (if somewhat folksy and informal) prose stylist are beyond dispute. 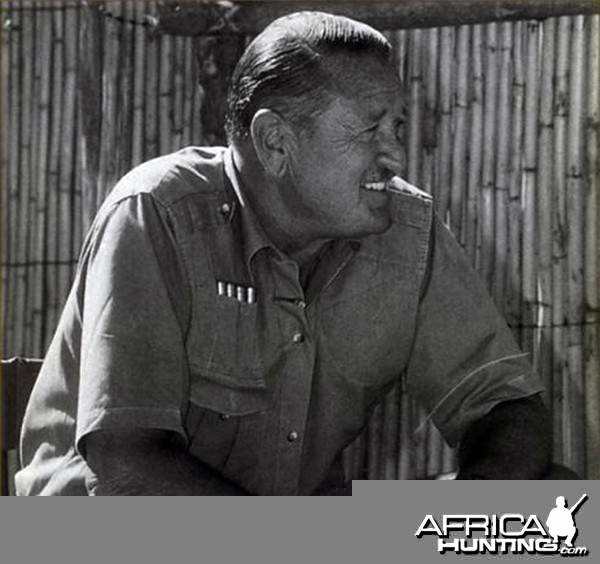 In early 1996 Capstick was a keynote speaker at the annual Safari Club International convention in Reno, Nevada when he collapsed in his hotel room and was diagnosed with exhaustion. He was immediately flown back to his adopted country of South Africa and underwent heart bypass surgery in a Pretoria hospital. He died just before midnight on March 13th due to complications from surgery.

After a small private ceremony, his ashes were scattered over the Chobe River in northeastern Botswana.

The .470 Capstick rifle cartridge, developed by A-Square's Colonel Arthur B. Alphin in 1990, bears his name. His legacy is also saluted by The Dallas Safari Club's annual Peter Hathaway Capstick Hunting Heritage Award for the promotion of responsible hunting and wildlife conservation. 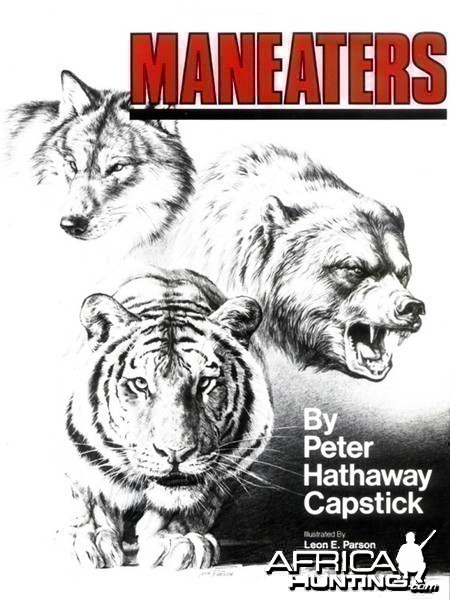 Maneaters by Peter H. Capstick. Veteran adventurer Capstick explores the wide world of man-eaters-creatures who regard Homo sapiens as just another noon-day snack. The ultimate horror of being eaten alive is very real, and in this book Capstick covers sharks, lions, leopards, tigers, bears, wolves, cannibals, and some other "marginal" killers such as jaguar and puma. Many people consider this to be one of Capstick's best. 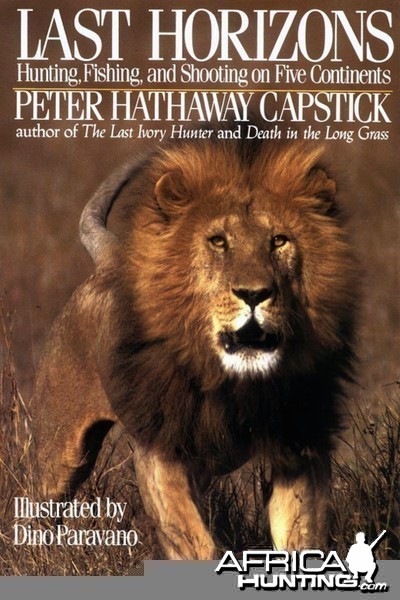 Last Horizons, Hunting, Fishing & Shooting On Five Continents by Peter H. Capstick. Prior to his successful Death in the Tall Grass , Capstick contributed to sporting magazines such as Guns and Ammo , Outdoor Life and American Hunter. This volume, a collection of pieces written between 1969 and 1986, will be welcomed warmly by sportsmen and women, safari buffs and vicarious adventurers. In addition to his tales of stalking and shooting dangerous game, Capstick holds forth on guns and ammunition; he says many safari clients carry more guns than they can handle. He discusses hunting the smaller African game (antelope) and recounts fishing experiences in Central and South America. In the final chapter, Capstick turns to whimsya mythical Open Day on dragons. Even a rabid anti-hunter would find this piece entertaining. 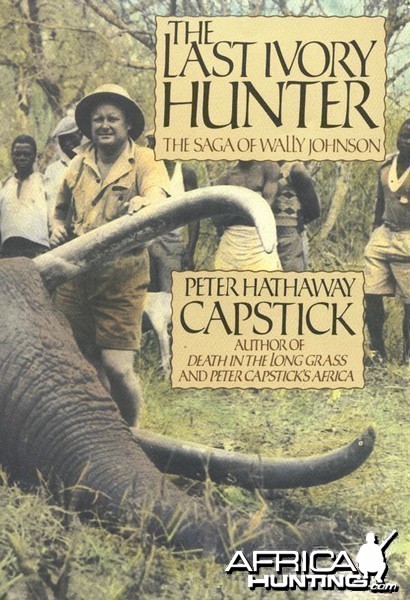 The Last Ivory Hunter by Peter H. Capstick. At a time when elephants were the scourge of the Mozambique countryside, trampling crops and killing villagers, and when lions mauled and killed dozens of people annually, good hunters were in great demand. Wally Johnson was one of the best; a professional ivory hunter, gold prospector and safari leader for more than half a century, he shot nearly 100 lions, 1300 elephants and perhaps 2000 buffalo. After the 1975 revolution in Mozambique, he was forced to flee. Not a conventional biography, this book is really a collaboration, a dialogue, between old friends with shared interests. Capstick, who has acquired a large audience with his books about hunting in Africa ( Death in the Long Grass and others), makes a few explanatory remarks at the beginning of each chapter, leading Johnson into reminiscence. He talks freely about his hazardous experiences in the bush (he survived the bite of the deadly gaboon viper and goring by a Cape buffalo); about safari clients (among them, Robert Ruark); and about the natives and their magic arts. Capstick and Johnson are splendid raconteurs, vividly recalling a vanished era. 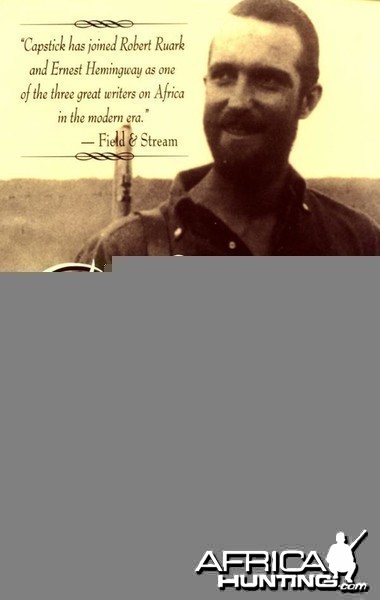 Warrior, The Legend Of Colonel Richard Meinertzhagen by Peter H. Capstick. Meinertzhagen (1878-1967) was a fascinating enigma: soldier, ornithologist, spy, big-game hunter, friend of Lawrence of Arabia, gentile supporter of the Jewish state, and killer. Capstick bases much of his account on Meinertzhagen's diaries, adding his own years of experience in Africa to help him vividly portray this British colonial officer who served in India, the Middle East, and especially British East Africa before and during World War I (and donning a uniform to fight at age 70!). A former big-game hunter and guide who died in 1996, Capstick has written widely about African people and wildlife. Here he is deliberately anecdotal, adding his strong opinions in describing the "glorious adventures and cunning bravery" of a man he both admires and abhors as a pioneering influence in guerrilla warfare, military intelligence, and individual resistance to stupidity.

Have all the books and films!!!!!!!!! They will always be classics! What a storyteller and a life lived!! RIP Peter
Marshall Farr | Senior Accounts Advisor | Wealth and Private Banking
TD Bank Wealth Managememt

I have most of his books. Good reading. Met him one time and he was very friendly and jovial. Unfortunately he left us too soon.

would of enjoyed hunting with him.

Legend. Enough said.
I received a hard copy of his book The African Adventures from Pieter Erasmus on my first trip to Africa. Great read and has done nothing to quench my thirst for the dark continent.
Now how to become resident and explore more?!?

Death in the Long Grass, what a GREAT book! I'd always heard my "husband" and his friends talking about this book, reciting funny quotes from it, I decided to read it on my very first safari, by myself back at camp on self-directed down-day. I actually write about it in one of my articles on our site. And I advise people to read it BEFORE or AFTER a safari! LOL
Last edited: Dec 2, 2016
Leah Page
jdsafaris.com
P

Love his quotes!
You must log in or register to reply here.