President Teddy Roosevelt said more than 100 years ago “People don’t care how much you know until they know how much you care”. This statement aptly describes the present status of the relationship between hunters and non-hunters.

Cohesive counter-measures of hunting associations and pro-use groups are scarce, often amateurish, and mostly read only by the own constituency. Individual hunters more often than not shrug their shoulders in a “we-cannot-change-them-anyhow” attitude!

The hunters’ and the non-hunters’ concerns for habitats and wildlife, although congruent in many if not most aspects, are not sufficiently cross-referenced and explained in context. More of the same will not lead to change. It will not make society aware of how much hunters care! It’s time that we recognize that we need innovative change! Especially in our outreach to the Millennial[1]generation. Hunting is not part of their current conversation[2]. Non-hunting Millennials are largely motivated by individual animal welfare – in the worst case by animal rights doctrines – rather than by holistic biodiversity conservation. Reaching out to Millennials means going into an open forum; it will not be a one-way conversation and we must be well prepared to keep up with their pace. 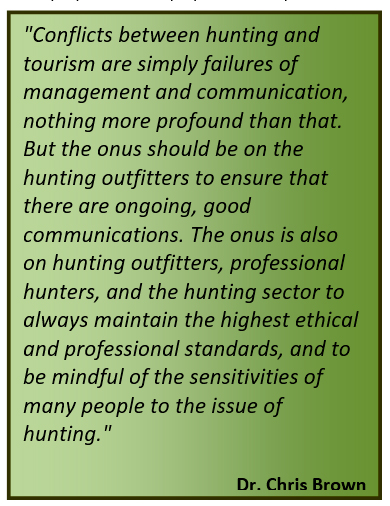 A recent example of well-reasoned outreach comes from a non-hunter, who has a deep understanding for nature and natural processes. This sterling explanation can be found under “Interesting Articles For African Indaba Readers” in this African Indaba issue. I don’t think I have ever encountered a better rationalization of the concept of conservation through sustainable use than Dr Chris Brown’s[3] thoughts and excellent logic presented in “The important link between hunting & tourism in Namibia – both working for conservation“. Please make sure that you read the entire article. It contains lots of ideas which should be used in the dialogue with non-hunters.

Dr. Brown elaborates the concept originally presented by Roosevelt, ardent hunter and passionate conservationist that Roosevelt was. Throughout his life he did the single most important thing to conserve wildlife: he enthusiastically fought to protect wild landscapes; like so many of us, on every continent.

Today our super-saturated societies are overloaded with fact-based and, with increasing tendency, spurious information. In this conundrum hunters and conservationists battle to make their fellow citizens understand and accept that hunting plays an important role in the lives of scores of million people around the globe.

Hunters, in their attempts at justification, are often hiding behind a smokescreen of concern for the well-being of rural communities, habitat preservation arguments, animal welfare and conservation and other rationalizations. These are valuable by-products of hunting, but most likely not our true motives when we venture outdoors to hunt. Our underlying motives are neither conservation, social outreach, or economics; nor are they philanthropic. Let’s do some soul searching. Why do we hunt in the 21st Century? What does hunting mean from an individual hunter’s perspective? Honest answers may be a game changer!

Our hunting heritage goes back to mankind’s origins in prehistory. Hunting has influenced our development, cultures, religions and social interactions. The deep relationship between hunting and human development is inescapable – from prehistory to the second decade of the 21st century. Hunting was and remains one of the most intense form of integration or re-integration with nature. When a hunter stalks the prey, all senses sharpen and provide an interconnected range of exciting and intriguing experiences before, during and after the hunt!

I believe that we hunt because hunting gives us sensual archaic experiences. Hunters experience nature unfiltered – as active participants and not mere observers. This is good and right, and doesn’t need to be justified! But it needs to be explained!

The process of the hunt is undeniably compelling. To begin with, one of the most fascinating aspect of hunting is the convergence of hunter and prey towards an uncertain conclusion[4]. In order to survive and prosper in the coming decades, hunting must be understood as an holistic experience. This experience includes learning about the intended prey and about the lands where wildlife dwells within a complex ecosystem. Of course this also includes learning from and respecting the people who live with wildlife in the hunting areas. It embraces the preparation for the hunt, the stalk, the approach, the matching of senses, and the final moment of truth when the animal is within reach of the deadly bullet or arrow. Just think of all the emotions before and after this moment, which may end with a kill or the escape of the quarry. Our expectations, elations, remorse or regret, and deep satisfaction or disappointment combine to a heady cocktail indeed!

Consider the emotional mélange when you relive a hunt, no matter how it ended. The memories in the stories, diaries and photos; and precious experiences recreated by looking at the horns and antlers of animals ethically hunted and tastefully displayed. Relive the working of honestly harvested venison and the preparation of delicious meals for friends and family! As modern urbanites are discovering the joy of cooking with wild ingredients and the wholesomeness of locally sourced wild venison, we have another great opportunity waiting to be exploited!

Yet, none of us must shy away from criticizing unacceptable and unethical hunting practices. This may put us at odds with some who consider criticism from within our own ranks as road to self-destruction. We need to be conscious of, and be able to explain the big difference between real hunting and mere shooting to kill. Once and for all we need to publicly draw the line! Let’s admit that some hunters are disconnected from tradition, disrespectful to the people who own and tend wild lands, uncaring towards animals and habitat, too lazy to study natural processes. They’re obsessed with the most modern rifle, the latest camo pattern, the newest range finder or GPS device. They conflate a true hunting experience with long range shooting prowess, bullet performance, macho images in the internet and huge trophies for record book placement!

Public perception does not differentiate between hunting and mere shooting! And often enough we fall into the same conflation trap and should therefore not be astonished that all hunting is painted with one brush! Recognize that engaged anti-hunting activists are very adept at exploiting this very conflation. Consequently hunting suffers strong emotional media, social and political pressure. Stop blaming the media to irresponsibly take sides. Stop insinuating that media produce fake news. Rather let’s cultivate relationships with journalists and seek out opportunities to set the agenda, rather than always being caught on the back foot!

During a hunt an animal walking around alive and well in one moment is reduced to a dead carcass after the shot. Have the courage elucidating the apparent paradox that we love animals yet we kill individual ones! Non-hunting nature lovers have understandable difficulties accepting this, since the act of killing animals has effectively been eliminated from the conscience of urban dwellers. Consequently large parts of today’s society see the hunter merely as killer. The truth is that hunters take ultimate responsibility and don’t use surrogates in our intense and participatory experience of nature’s life and death continuum.

We also have to adjust to the impact we have on biodiversity, other creatures and on our non-hunting fellow citizens. Our archaic hunting heritage is, therefore, tempered with limitations drawn by modern conservation biology, formal rules, conscious self-restraint and individual ethics.

In the prevailing urban nature remoteness it is rarely appreciated that the keys to sustainable wildlife management are habitat preservation and the conservation needs of interacting multi-species animal populations. Protecting individual animals is of little conservation relevance[5].

Building bridges to the silent majority of non-hunting fellow citizens requires individual involvement, preparation and the help professional communicators to formulate truly persuasive messages. These messages should contain factual and psychological evidence, an honest analysis of our motives, and the reasons which motivate non-hunters to express understanding for or rejection of hunting.

Let us explain that hunting means for us not just a set of science-supported facts. Hunting encompasses much more: a participatory nature experience, individual sets of values and promises, stories of the outdoors filled with emotions of awe and wonder, live-long learning processes and the simple joys of escaping to the great outdoors. Combined with evidence from conservation biology as well as from economic and social sciences like the examples Dr. Brown presented, we have an excellent tool-box at our fingertips!

What if we started a concerted effort of ‘branding’ hunting? What if we conclusively explained our urge to be in nature as authentic participants in the eternal circle of life and death? What if we aligned our messages with the emotions of our non-hunting fellow citizens? What if we seek and actively nourish the conditional support of a wide range of scientists like our friends from the global sustainable use scientist network of IUCN[6]?

Providing education and proper perspective is conservation leadership. Therefore, hunters must create cross-cutting alliances with those who have common conservation objectives. Hunters and non-hunters have, as a rule, identical conservation goals. If we concentrate on what unites us, we can trigger worldwide conservation actions which cut through to the public, the corporate world and to policy makers.

Hunting isn’t just picking up a gun and shooting an animal. Our actions in the field must bring honor to the wild places and the wild prey we pursue. Reflect on this and communicate your honest reasons and answers within the circles of your friends, at the workplace, and especially whenever you have a chance to talk to non-hunters. It will require dedication to overcome the obstacles. But we have no option other than this to live up to Roosevelt’s challenge: Let people know how much a genuine hunting experience makes us care for wild landscapes and biodiversity.

[1] The Millennial Generation reached adulthood around the turn of the 21st century and make up nearly one-fourth of the total population in North America and Europe.

[2] See article ‘Culling To Conserve: A Hard Truth For Lion Conservation’ with Dr. Byron du Preez’ remarks on ecosystem conservation in this issue of African Indaba

[3] Dr. Brown is the CEO of the Namibian Chamber of Environment

[4] See the suite of articles “Encore: Canned Lion Breeding And Shooting”; “The Color Game Is Over”; “Defining Fair Chase Behind A High Fence”; and “Boone And Crockett Club On Trophies” in this Issue of African Indaba

[6] See article ‘The Baby And The Bathwater- Trophy Hunting, Conservation And Rural Livelihoods’ in this issue of African Indaba
Gerhard R Damm
AFRICAN INDABA - Dedicated to the People & Wildlife of Africa
You must log in or register to reply here.

Hunters and The Media

25 Reasons Why Hunting Is Conservation

Cheetah Hunting - Did You Know