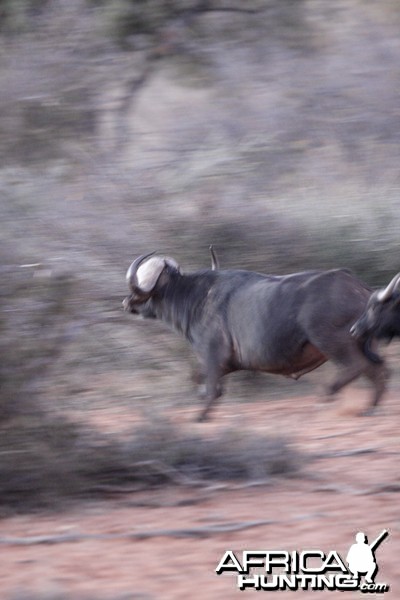 Hunting the African Buffalo is a dream to many hunters. This is fortunately my reality, the dream that is my office in the savannahs of Africa. The first buffalo hunt of the season was by no means an ordinary one. April is green, wet, thick, and relatively hot – all these describe this time of year in Waterberg National park in Namibia. 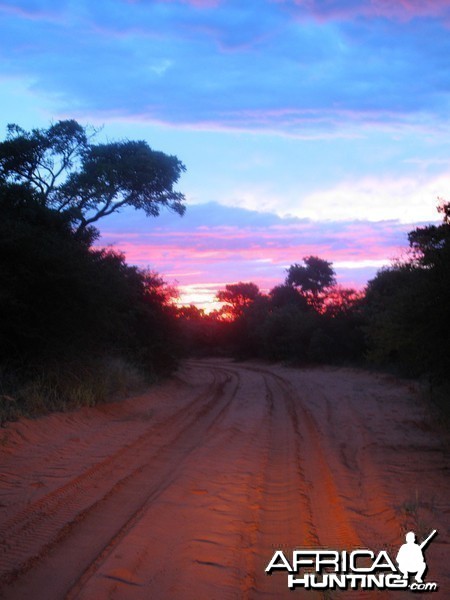 April is a beautiful time of year in Namibia, especially if you like it green and lush in a country known to be dusty arid shades of brown and yellow. The abundance of surface water at this time of year means the game is spread out, and not concentrated around remaining water points during the later seasons of the year. Depending on where you are in Namibia, it can be very thick – reducing visibility to just a few feet in places. Relatively hot, December and January will have you melting in the field at mid-day, but for hunters coming from the northern hemisphere closer to the arctic’s April can be hot – wonderful and mild for those from the southern half of the United States of America! 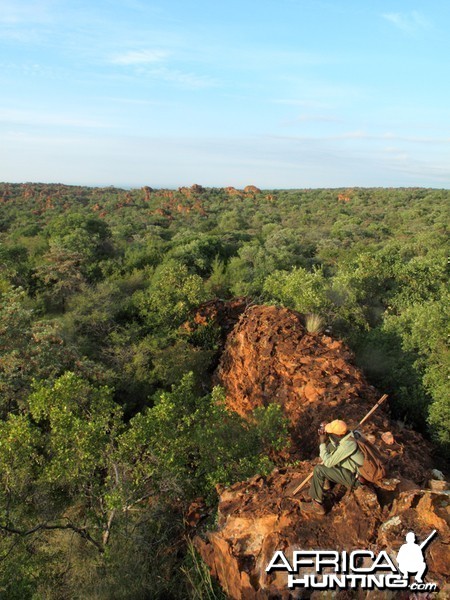 Our safari started in high spirits, entering the Waterberg National park 30 minutes before sunrise on the first hunting day. A double-edged sword, by traveling in the dark we missed the spectacular view on the ascent on a pass of the red petrified sand dune cliffs and plateau of the park. However, being able to witness the spectrum of a new dawn in Africa was a beauty all its own. “Welcome to my office” is a cliché phrase, which becomes appropriate to say for the first, usually silent start to the day while soaking in the fresh air and anticipating what the day would bring.

“Something or something awful or something wonderful was certain to happen on every day in this part of Africa.”1 Hemingway said about east Africa, but this week in Namibia was going to prove true even in south-western Africa. 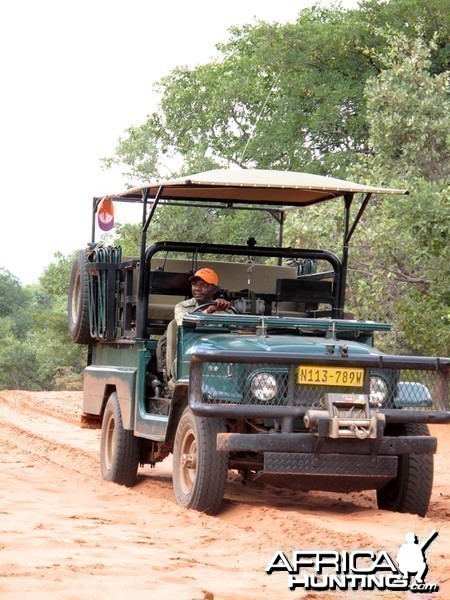 Starting at one of the water points in the park, we quickly found the relatively fresh tracks of a bachelor herd of Buffalo bulls, headed out after water to bed down for the hottest part of the day. Rifles, water bottles and utility belts found their comfortable carrying positions after a few hundred yards as everyone found their stride, trudging through the beach-like sand while the sun made its amazing appearance. Abiud, my hunting assistant and head tracker, followed the tracks easily over the soft red sand, meandering through Terminalia forests and open savannah. Once the tracks showed us that the Buffalo were seeking shade, our “hand brake” was pulled up, rifles re-checked and slowly we started stalking good shade, especially the Weeping wattle trees – a favorite for Buffalo in this area. We term the final indication that our quarry was looking for their siesta spots the “crazy Ivan” – where they loop around 270 degrees, in true Buffalo style, and lie up overlooking their approach. Once the “crazy Ivan” maneuver is seen in the tracks, the thunder of hooves makes the hunter’s hearts sink as the Buffalo hear / smell / see you and makes their escape. After a few hours of careful trudging, we approached a shade thicket with great caution. A dark shadow raised its head, and then stood – giving a two second window for a shot. We saw a decent spread, but were unable to have a good look at the bosses. He was gone, along with all his comrades. This was to be the last semi-decent chance we were to have for a shot in the next several days… 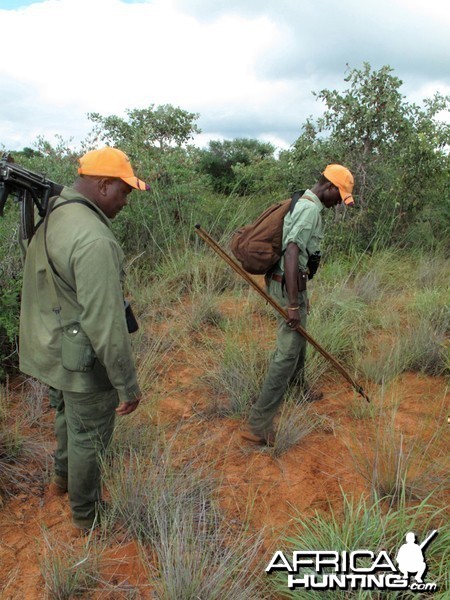 What followed in the next six and a half days was pretty much more of the same, with the Buffalo outsmarting us every time. Our hearts were sinking deeper with every sound of thundering hooves.

At this point a note on my client, now friend, Alexander: What a privilege to hunt with a man in such good physical condition and fantastic endurance, even after the daily 4 AM wakeup call, only to return to camp at 8 PM or later. We had16 hours of hunting daily and not once did he question our tactics, or complain about the 100 miles or more we covered in those few days. 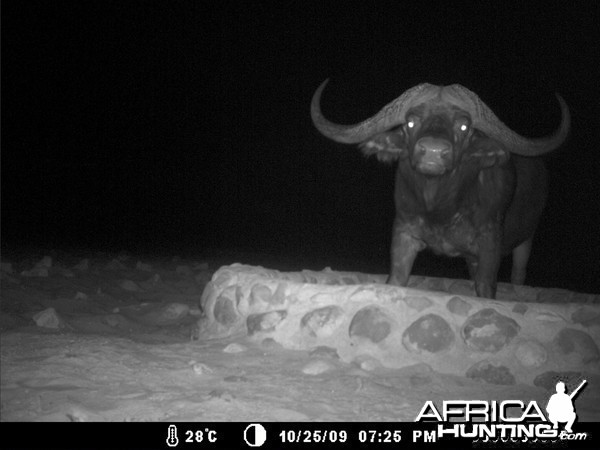 The hunting team got onto Buffalo, at least two different groups a day, and due to the extreme conditions they always got away. We had a close shave one afternoon tracking a buffalo, frozen to the bone from one of Namibia’s freak thunderstorms. The tracks could have been a month old, or flaming fresh. I could not tell the difference, but my hunting assistant Abiud pressed us on after seeing a huge bull disappear into the bush minutes earlier. Again, a two second shot with only his head visible at about 15 yards, which was not enough time for even the most practiced shooter to fire a round with confidence. 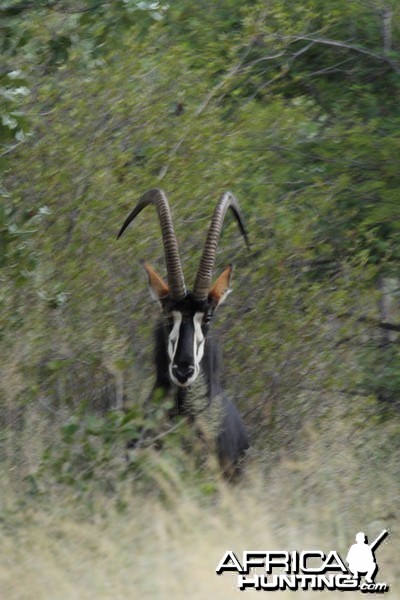 We were having a hard time with Buffalo, Sable and Roan Antelope standing next to the road, I am sure giggling at our antics chasing their ruminant friends. If they had been on the wish list, they would have been nowhere to be found… 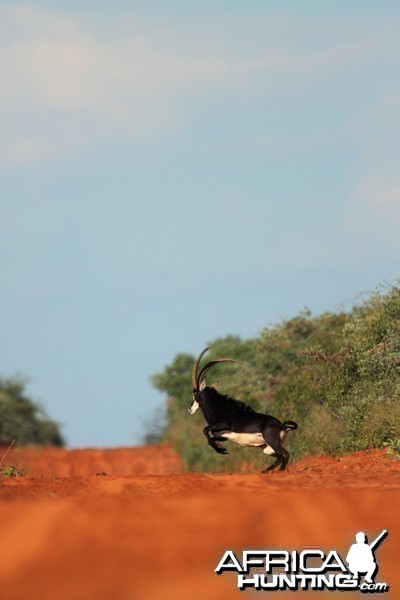 On the last morning, we decided just to “take a walk” long the rocky outcrops and koppies that signal the start of the plateau and the drop of one thousand feet to the plains below. The walk was uneventful – Black and White Rhino, Eland, Roan Antelope tracks – but not our desired quarry. Towards the end of a three hour walk, we happened upon a pair of Buffalo bull tracks.

“We give it one last try” I told our team, and off we trudged in our all so familiar stride, with Abiud, Alexander, Tommy the game scout and myself. A couple of hours, and a crazy Ivan later, we were in fast pursuit. The savannah opened up to plains where it seemed like for the first time in days we could see a couple of hundred yards in front of us. “We must hurry; they are on their way to water!” Abiud exclaimed, and put it in low gear hurrying on the tracks like a magician working his magic. Alexander, his boots still wet from the thunderstorm two days previously was laboring, his feet having gotten soft from the moisture retained in his boots. On we pushed, days of frustration forgotten, with eyes focused and concentrated to see our quarry before they saw us. The wind was good for a change, the track straight, and we hoped that the tables would turn in our favor.

Ahead we suddenly saw the Buffalo, a pair of bulls! The first was an immature bull that immediately filled me with despair. All this time and energy and now we get the opportunity at a young bull! Then we saw the second, darker and distinctly larger bull. As he walked away from us, his horns were clearly visible – hanging a good 4 – 5 inches wider than his body on each side. In the wonderful book about our bossed quarry it is written “If the horns can be seen sticking out beyond the widest part of the body, then you know that you have a respectable trophy… worth perusing” 2 And pursue we did. 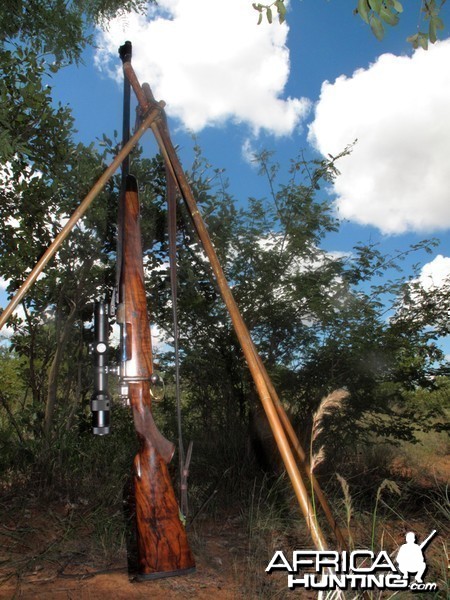 Several hundred meters before the bulls got to the water point, they started milling around. This was our chance to close the gap. Patience. “Close your eyes, relax, and think of your wonderful wife and daughters,” I whispered in Alexander’s ear as we were waiting on the sticks to take the shot. Alexander was far too excited to take the shot at that moment, and I knew that I needed to slow things down a bit and make sure that he made a shot we would not all regret later. A few seconds later, the Buffalo turned, and while walking slowly across the front of us, the shot rang out…the Norma PH soft-nosed bullet making the pleasing “whack” which is the indication of an obvious hit, and a good one at that. The bull succumbed in 40 yards and yielded to the 400 grain Woodleigh bullet from Alexander’s custom .375 from Mr. Schilling’s Zella-Mehlis workshop.

The Askari of the old bull would not leave his fallen companion. This distracted us from the fruits of our labor for a while, discussing what we should do to make the young bull retreat. 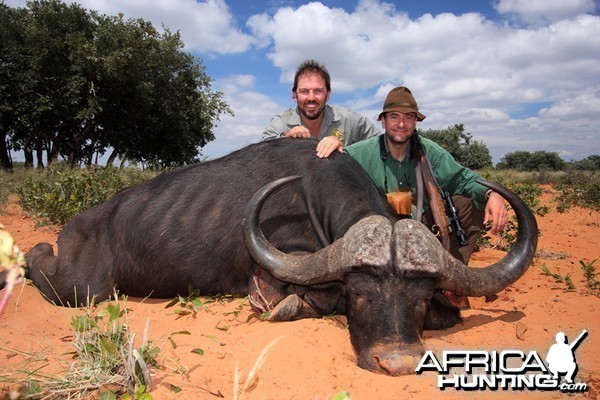 The satisfaction was complete when we walked up, gave the old boy an insurance shot and with no reaction, hugs replaced handshakes on this day of days. Our hard work had paid off, the trophy in the salt, a satisfied hunter and an elated hunting team. We all walked off several pounds in that week, but happy that it all came together, even if it was with 25 minutes of hunting left on the last day. 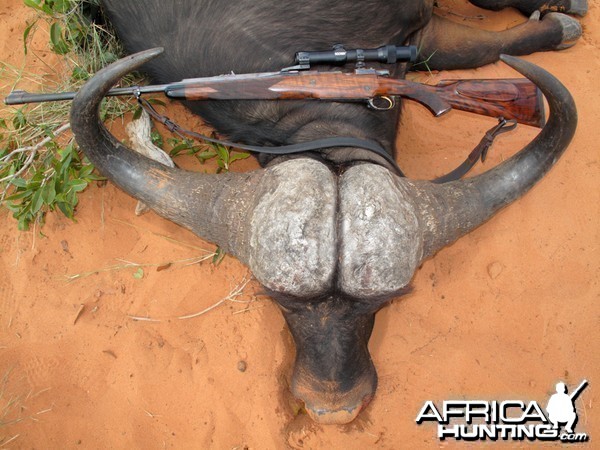 About the trophy: This Cape buffalo, measured green, is unofficially the new #1 buffalo ever hunted in Namibia on the Namibia Professional Hunting Association Top 10. With a spread of 45 inches, and its total SCI score putting him in the top 50 of the record book, it is really a tremendous trophy that was hard earned by the H.N.S. hunting team and the client Alexander. This record will become official at the end of the required trophy drying period at the end of May 2010. See the H.N.S. 2010 trophy picture gallery. 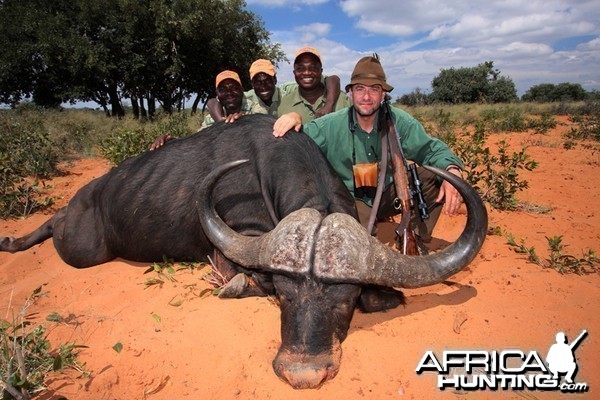 About the area: Waterberg National Park was once again opened for hunting in the 2009 season after being closed for 6 years. Hunters Namibia Safaris secured exclusive rights to this hunting area in April 2009. Please click on the following link: HNS Waterberg information.

Thanks for posting a hunting report and pictures. Sure is a pretty cape buffalo.

Massive trophy .... buff , your client must be very elated hunter . Congrats ... lovely pictures and a thorough hunt report, thanks for sharing ....

Congrats to the lucky hunter. A well under trophy is great, it being a monster is just icing on the cake.

Hey there, just curious where exactly did the bullet hit the buffalo?
You must log in or register to reply here.

Buffalo hunts in the Caprivi

The hunting season in Africa is going well