I like everything about it (it's definitely a working mans rifle) but Ive always been concerned about the rumors I hear about the Santa Barbara Actions. I've heard cast, investment cast (although that's early for that) and forged with minimal finishing and poor heat treat. In my experience these actions are more likely forged with adequate but not outstanding heat treat but then I've only dealt with 7x57 and 30/06 on these actions.

It says something that P.O. Ackley used those actions in his rifles.
Last edited by a moderator: Dec 13, 2018
R

According to a friend of mine that passed away some years back, who was a good friend and student of PO Ackley, Mr Ackley made rifles on several different actions and put his name on the barrels as do several custom gunbuilders but in the later years he sold rights to use his name to a company, I forget which one, to build rifles on a M98 style mauser action- could have been the Santa Barbara. I saw one of these in the used gun rack of a gunstore about 15 years ago. I passed on it and later asked my friend about it. His response was that it really had nothing to do with Mr Ackley, other than it had his name on it. Also noted was that I was better off to have kept the money ($200 as I recall) in my pocket and left the rifle in the rack.

My 98 404 action was made in Spain and when I was contemplating the project I was told about soft Spanish actions so I took it to work and checked the hardness on our Rockwell tester and it was well in spec in every area I could check it.
So I proceeded with the project.

I wouldnt hesitate to use a Santa Barbara action for a 404J build or to purchase a 404J built by someone else on an SB action..

I asked the seller about this rifle. Rear barrel sight is gone, he doesn't have it. I have a PH catalog with this model of rifle but it only lists .375 and .458. He says it has matching proof marks on barrel and action and barrel stamped .404 . This is the only one of these I have ever seen and I swore if I ever did I would buy it, but that was then... I wouldn't have any concerns about the action though, they have a made metric you-know-what ton of rifles on those actions. My dad once had a very nice 1100 Lightweight in 6.5 Swede and it was a very good rifle. Probably worth the cost on rarity and caliber alone, surprised its still there actually.
Z

I have posted about this before but, back when I was taking shooters for their firearm licences, here in NZ, we had a Parker Hale rifle built on a Santa Barbara action which had been chambered for .25-06 and which had failed on the second shot with a .308 Winchester cartridge in the chamber. The action failed in exactly the same way that I would expect from a premium Oberndorf sporter, i.e. a chunk of metal came out of the receiver at about 1-2 o’clock but the third lug held. The timber around the magazine we’ll split and the barrel went down range. The barrel was put into another M98 action as it was perfectly all right and the owner’s friend had a learning experience about matching cartridges to chambering.
By contrast, I have seen the remains of a Tikka 595 investment-cast stainless steel rifle, chambered for the .25-06 which grenaded on the first shot with a .308 Winchester round in the chamber. The clown who owned the Tikka, had also purchased the .308 Winchester version, put both rifles and types of ammunition on the bench at the same time and decided to shoot one last round in the .25-06 without checking what ammunition he had put in the chamber.
A good shot at close range beats a 'hit' at a longer range.

Sometimes case hardening of softer metal is more forgiving than something hardened whole way through. I know when I worked in a mold shop that ware plates that were extremely hard would shatter like glass if they were dropped.
Shawn
R

The photos below are from the 1985 Parker-Hale catalogue.
As mentioned by Sestoppleman it’s the .375 & .458 which are normally listed but I’ve seen a .404 mentioned in either an earlier catalogue or an advertisement by Parker-Hale. I remember the accompanying text mentioned it was particularly favoured by game departments. 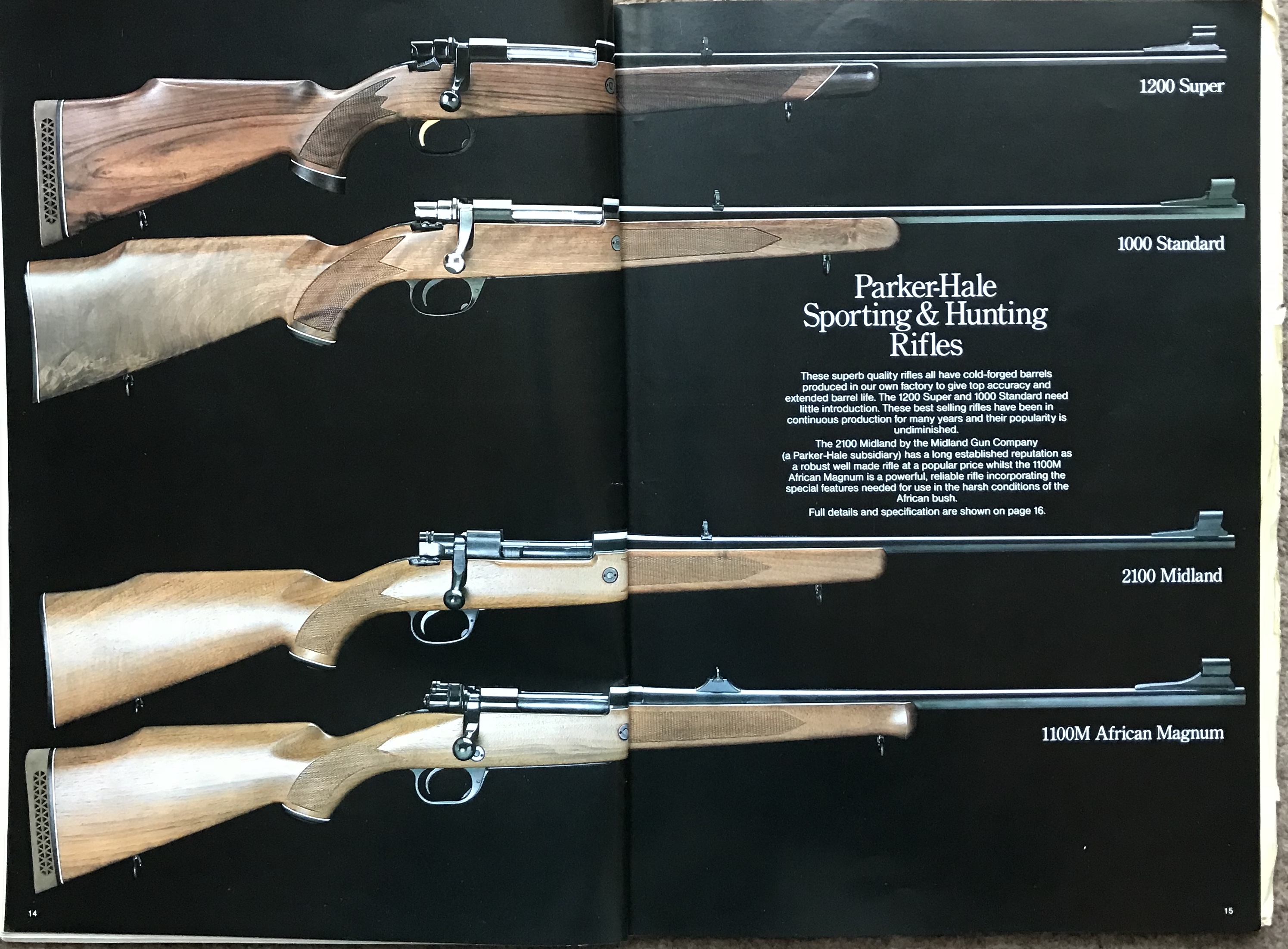 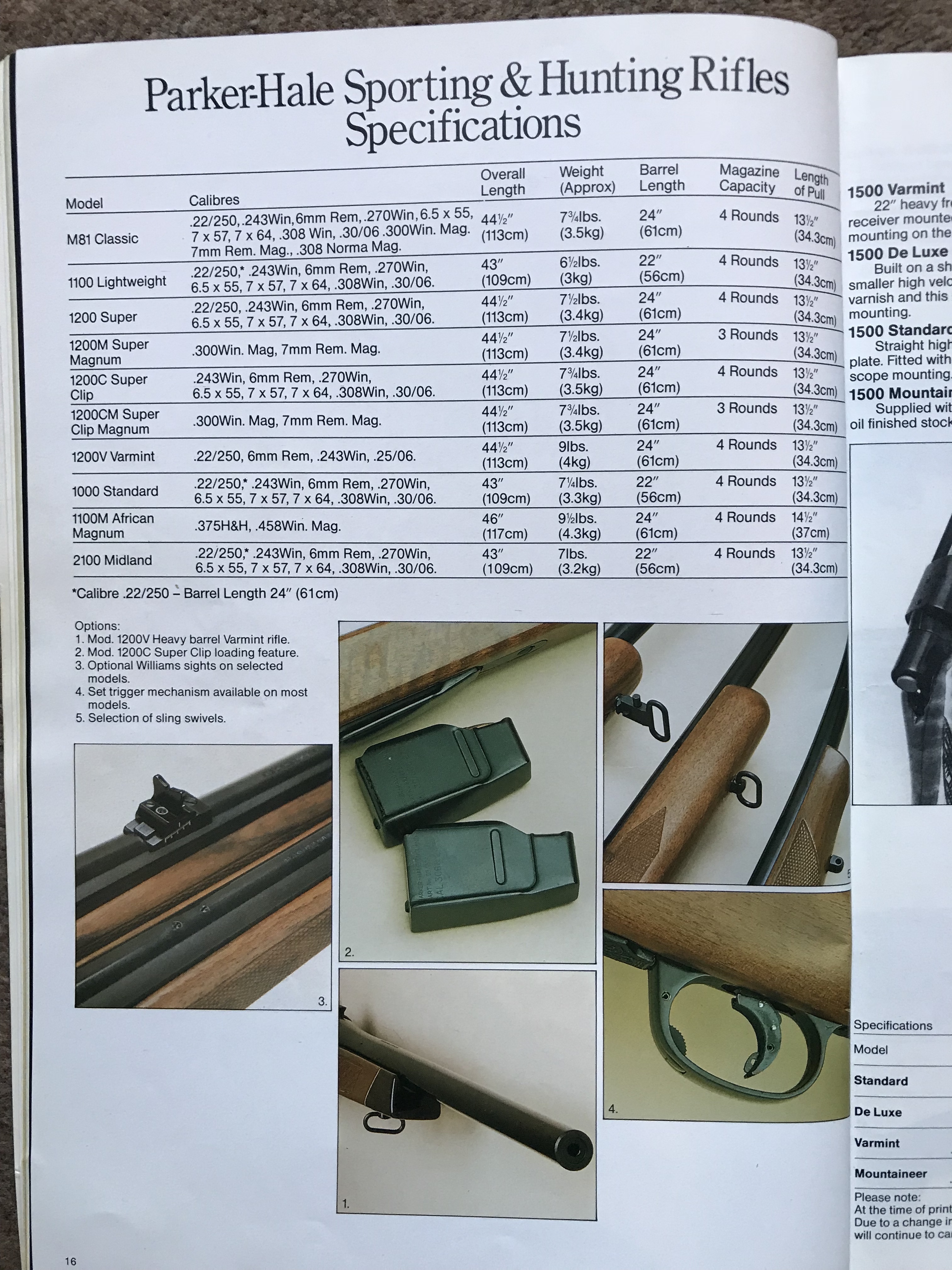 I wouldnt hesitate to use a Santa Barbara action for a 404J build or to purchase a 404J built by someone else on an SB action..
Click to expand...

I'm not exactly a gunsmith but it seems to me the action is subjected to total pressure (Not just psi) and still might be more likely to suffer damage from a .505 Gibbs than a .17 Remington despite the .17 being a higher pressure round. The surface area receiving pressure is far larger so is transferring much more energy.

I do however concede a .404 Jeffery is a far better choice than a .416 Weatherby anyway you slice it.

Im not a gunsmith either.. but I've built a number of guns ranging from 7x57 (51,000 PSI) to .416 Taylor (65,000 PSI) on small ring and large ring mauser actions (as well as other actions over the years).. everything I have read in gunsmithing manuals, mauser texts, etc.. advises using chamber pressure as the benchmark for determining whether or not an action is suitable for certain calibers.. How you derive max pressure measurements (whether PSI, CIP, MPa, etc.. ), and whether its to SAAMI specs or some other standard depends on whose manual you are reading.. So far following PSI as a guide hasnt let me or anyone else that I know that builds mausers down...

Some actions have been noted for being made of softer steel (for example the "spanish" small ring mausers are generally considered to be softer than sweedish small rings).. the only thing that changes is most gunsmiths would recommend you stay on the lower side of chamber pressures of you are wanting to rebarrel a spanish mauser (7x57 is going to be a better choice than .308 for a spanish mauser.. where you might readily consider something with higher pressure for a sweede)..

I think analyzing any deeper than that is likely tantamount to tripping over mouse turds..