Opinion: RIP Cecil the Lion. What Will Be His Legacy? And Who Decides?

EVERY HUNTER should post this on any social media they can, hunting forums and new artucles on the web as a response to all the ANTI crap going on these days. GET PRO ACTIVE and save your hunting heritage ! Just sit back and lay low DON'T defend who and what you are and think it will go away. IT WILL YOUR RIGHT from GOD to hunt !

Dr. Rosie Clooney is Chair of the Sustainable Use and Livelihoods Specialist Group at the International Union for Conservation of Nature (IUCN).

Zimbabwe: R.I.P Cecil the Lion. What Will Be His Legacy? and Who Decides?

London — Cecil the lion, a magnificent senior male, much loved and part of a long-term research project, was lured out of a safe haven in Zimbabwe's Hwange National Park last week and apparently illegally shot, to endure a protracted death.

As the global outrage pours out, consider for a moment that trophy hunting has now been banned across Africa. Trophy hunting is the limited "high value" end of hunting, where people (often the wealthy and mainly Westerners) pay top dollar to kill an animal. In southern Africa it takes place across an area close on twice the sum total of National Parks in the region.

Hwange Park staff numbers have been radically cut, and there is little money for cars or equipment for protection. Bushmeat poaching is on the rise and the rangers are ill equipped to cope.

It arouses disgust and revulsion - animals are killed for sport - in some cases (such as lions) the meat not even eaten. Even the millions of weekend recreational hunters filling their freezers are uncertain about trophy hunting.

It seems to have little place in the modern world, where humanity is moving toward an ethical position that increasingly grants animals more of the moral rights that humanity grants (in principle at least) to each other.

So let us move now through the thought bubble where the EU and North America ban import of trophies, Namibia, South Africa, Zimbabwe and others ban trophy hunting, the airlines and shipping lines refuse to carry trophies, and the industry dies a slow (or fast) death, ridding the world of this toxic stain on our collective conscience

We turn to survey southern Africa, proud of what we have achieved by our signing of online petitions, our lobbying of politicians, our Facebook shares and comments.

Did we save lions? Have we safeguarded wildlife areas? Have we dealt the death blow to trafficking of wildlife? Have we liberated local communities from imperialistic foreign hunters?

Let's go back to Hwange National Park, the scene of Cecil's demise. The Zimbabwe Parks and Wildlife Management Authority, responsible for managing this and other National Parks, is now in trouble.

It derived most of its income for protection, conservation and management of wildlife across the country from trophy hunting, with minimal revenue from central government (not well known for its good governance and transparent resource allocation).

Hwange Park staff numbers have been radically cut, and there is little money for cars or equipment for protection. Bushmeat poaching is on the rise and the rangers are ill equipped to cope. The commonly used wire snares are indiscriminate, and capture many lions and other predators who die agonizing and pointless deaths.

In Namibia, more than half of the communal conservancies (covering 20 percent of the country) have collapsed, because the revenue from non-hunting sources (such as tourism) is not enough to keep them viable and they have not been able to find alternative sources of income.

Namibia's communal conservancies are an innovation of the 1990s, and have been responsible for dramatic increases in a wide range of wildlife species outside of national parks including elephant, lion, and black rhino. Income from trophy hunting and tourism has encouraged communities to turn their land over to conservation.

Communities retain 100 percent of benefits from sustainable use of wildlife, including hunting - almost 18 million Namibian dollars in 2013. This money was spent by communities on schools, healthcare, roads, training, and the employment of 530 game guards to protect their wildlife.

Almost two million high protein meals a year were a by-product of the hunting. Now this is all gone. A few conservancies managed to find wealthy philanthropic donors to prevent them going under - but they cross their fingers that the generosity will continue to flow for decades to come.

Game guards are unemployed, unable to feed their families, looking for any opportunity to obtain some income. Communities are angry - they were never asked by the world what they thought about this. Few journalists or social media activists ever reflected their side of the story. Conservation authorities and communities are again becoming enemies.

Where the conservancies have collapsed, the wildlife is largely wiped out. The bad old days pre-reform have returned, and wildlife is worth more dead than alive.

Hungry bellies are fed with poached bushmeat and the armed poaching gangs have moved in - communities are no longer interested in feeding information to police to help protect wildlife, game guard programmes have collapsed for lack of funds and have spare targeted to supply the criminal syndicates, and rhino horns, lion bone, and ivory are being shipped out illicitly to East Asia.

In South Africa, trophy hunting has stopped, including the small proportion that was "canned". On the private game ranches that covered some 20 million hectares of the country, though, revenues from wildlife have effectively collapsed.

Those properties with scenic landscapes that are close to major tourist routes or attractions and have good tourism infrastructure are surviving on revenues from phototourism, but gone are the days of expanding their wildlife asset base by buying land and restocking this with additional wildlife. Most of the other landowners have returned to cattle, goats and crop farming in order to educate their children, run a car, pay their mortgages.

Wildlife on these lands has largely gone along with its habitat - back to the degraded agriculture landscapes that prevailed before the 1970s when wildlife use by landholders (including hunting) became legal here.

Lions that were on these farmlands are long gone, and the few that remain in national parks are shot as problem animals as soon as they leave the park. The great conservation success story of South Africa is rapidly unraveling.

Speculative? Yes, but a reasonable prediction, because this has happened before. Bans on trophy hunting in Tanzania 1973-1978, Kenya in 1977 and in Zambia from 2000-2003 accelerated a rapid loss of wildlife due to the removal of incentives for conservation. Early anecdotal reports suggest similar patterns are already happening in Botswana, which banned all hunting last year.

Let us mourn Cecil, but be careful what you wish for.
Last edited by a moderator: Aug 2, 2015

Can somebody please print this article out for me so I can staple it to Ricky Gervais' forehead?
Tell PETA my mink is dragging on the ground

Rosies article is sooo eloquent...
"I have taken more out of alcohol than alcohol has taken out of me.” Winston Churchill

Great article. Very well written and poignant. Thanks for sharing Dennis.
Why we hunt, even lions? Real hunters need thriving wildlife, so we help make it happen. - Olivia Nalos Opre

The internet is a good thing, but it can also be a very bad thing. A double edged sword, if you will. News, as well as negativity, goes viral almost in real time. 30 years ago Cecil would have been nothing but a news blurb on a back page, and it would have been weeks, or even months, before the Liberal pantie waders would find out about it. Nowadays, the Liberal hate mongers swarm instantaneously over everything, like a pack of rabid rats.

Irregardless, this whole Cecil escapade is going to be a bad thing for African sport hunters.

great tell it like it is article,but on this site its preaching to the choir,how to get it on the internet to compete and off set the bullshit the antis and media are sending out to the public???

edward said:
great tell it like it is article,but on this site its preaching to the choir,how to get it on the internet to compete and off set the bullshit the antis and media are sending out to the public???
Click to expand...

I just posted it on another hunter based website with the same encouragement Dennis gave. Post it on every social media site extoling the evil worthlessness of hunters in general as well as the Cecil incident. Social media can work for us as well as the antis.
Why we hunt, even lions? Real hunters need thriving wildlife, so we help make it happen. - Olivia Nalos Opre
S 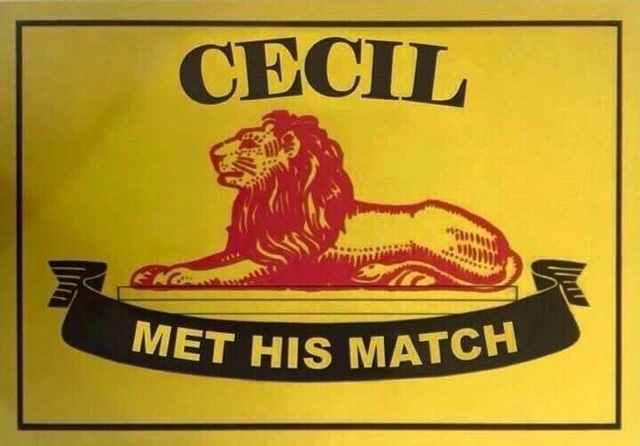 Cecil the lion: What happens after the lynching?

Can Rhinos Profit From Trophy Hunting?