…And One Spur-Winged Goose Tanzania
by Bill Fronterhouse

Historic events from the high deserts of southern New Mexico shook the world in 1947. Unfortunately, my birth was not one of them. But growing up in the desert town of Roswell, my goals and ambitions - like everything else from Roswell - were a little different, including my list of heroes: Samuel Baker, Dr. David Livingstone, Richard Burton and Frederick Courteney Selous.

In 1954, my father’s employer, Mr. J.P. White, returned from a safari in Kenya and invited friends to a showing of the black and white film of his hunt. Swearing to be on my best behaviour, I was allowed by my dad to watch my first movie from the golden age of African safaris. More than 50 years later, the buffalo and rhino charges are still fresh in my mind. A door was opened that day that would forever change my life.

A year later, after badgering my father for a double rifle, I got the next best thing: my very own single-shot bolt action .22. What more could a young boy want?

Forty years later, for my 50th birthday, my wife and hunting partner extraordinaire, Bev, bought me a .500. Not just any .500, but an E.M. Reilly .500 Black Powder Express made in London in 1885. After two years of working out the kinks to make it accurate, just like Selous in 1871, I headed to East Africa with a fine Reilly double express. It was my first African hunting safari, and man, it just doesn’t get any better than this.

Although I’d learned that the British had developed this calibre to hunt tiger and leopard in India, conventional advice was that the rifle might work fine on plains game, but certainly not on dangerous African game. For some reason, the .500 BPE never found much favour in Africa, although John Taylor used it with much success on both buffalo and lion.

For my safari I wanted my game to be fenced in only by miles and miles of bloody Africa, and a traditional tented camp along a river, like Hemingway and Robert Ruark experienced and wrote about, was as important to me as the game itself. After two years of research and checking references, Bev and I decided to hunt with Usangu Safaris. The Mulla family has lived and hunted in the Mbeya region for generations. And three weeks on the banks of the Great Ruaha River was everything we imagined it should be. 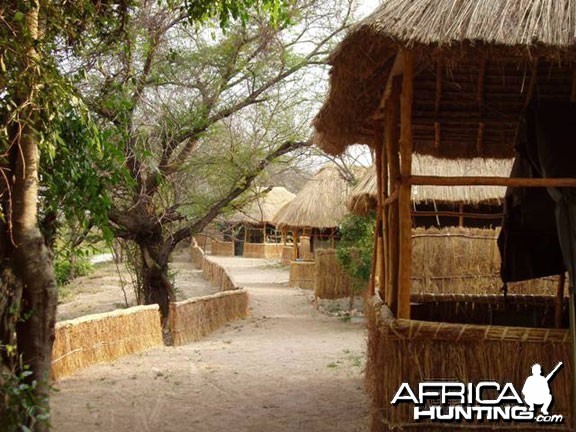 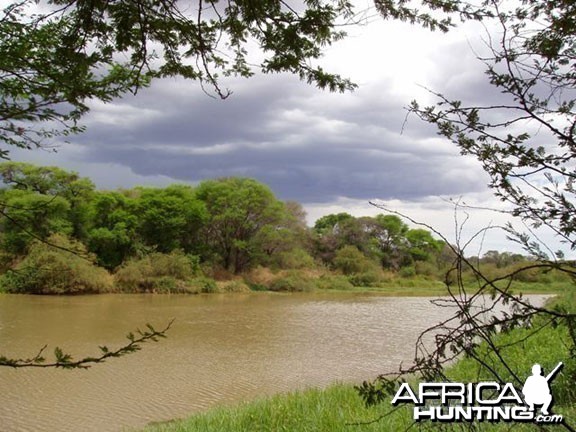 Fronterhouse wanted his first big-game safari in Africa to be focused along a river, as described by Hemingway and Robert Ruark. And he found his chance, with Usangu Safaris, along the banks of the Great Ruaha River in Tanzania.

When on the first day I opened my guncase to sight in our rifles (including a .416), the .500 generated plenty of oohs and aahs from my PH, Sherdell, and the hunting team. “Muzzle loader, huh?” “No, it’s a breach loader with external hammers.” A long 'huummm', was the unenthusiastic response.

I then spent some time explaining to Sherdell my dreams and desires - without trying to sound like a greedy American client who wants it all, and now! How we hunted was as significant to me as what we hunted.

I got my wish. On the first day, we tracked for nearly five hours on foot before I put my first African trophy into the sights of my .416 - a nice old ‘Dagga Boy’ that went down well.

The next day, we put a stalk on a herd of zebra. Sherdell thought this would be a good test for the old .500. At 35 yards broadside, the stallion looked as though he’d been hit by a truck. As the blue smoke cleared, mixed in with the hoots and hollers, I got Sherdell’s verdict: “Nice gun.” 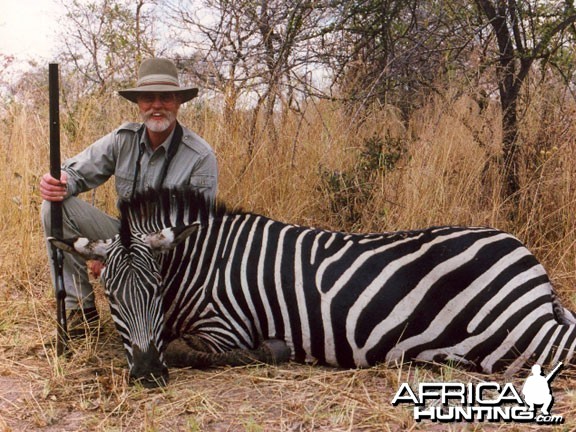 PH Sherdell thought a zebra stallion would be a good test for the E.M. Reilly .500 Black Powder Express, made in London in 1885. At 35 yards broadside, Fronterhouse made a perfect shot.

As the safari progressed, I took many good trophies with both the .416 and the .500. I missed some as well. Only once did I feel a little apprehensive. As the amber sun was setting, I watched a big tom leopard feeding on our bait. Now was the real test for the .500! As I cocked the hammers I kept thinking to myself, “Don’t screw this up!” In the smoke-filled blind, Sherdell’s hand slapped my back and I heard the magic words: “Perfect shot, right to the shoulder.”

By my third buffalo, Sherdell felt that both the .500 and I had proven ourselves. The first barrel to the right shoulder; a few minutes later, the second shot two inches above the first one. The old warrior was down for keeps. 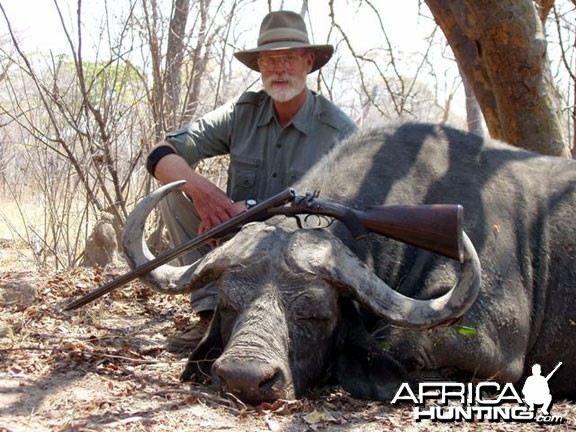 Fronterhouse first used a .416 to hunt Cape buffalo. After both he and his 120-year-old .500 BP Express won the confidence of the hunting team, he took his buff - first barrel to the right shoulder, and the second shot two inches above it.

One day toward the end of the hunt, we were driving on the edge of the Great Rift Valley. As we stopped to glass the vastness before us, Sherdell spotted something in the distance. There, in a small puddle of water some 600 yards away, was Africa’s largest waterfowl - a spur-winged goose. His metallic black upperparts, white belly and red bill were distinct, even at this distance.

“Do you think you can hit him?” he asked me.

“Why do you want me to shoot a goose?”

“Because they’re very good to eat,” he replied.

“All you had to do was say so!” I told him, but asked if we could get in a little closer.

“No problem!” he concluded.

We eased across the valley and finally stopped the truck. Retrieving my shooting sticks, I reached for my scope-sighted .416 to try for a headshot. There was a lot of conversation going on in the back of the Land Rover. The consensus was that I should attempt to shoot the goose with the .500!

Although it was a very long shot, with such an enthusiastic audience I thought I would give it a try. Having never actually observed a spur-winged goose up close, its real size (30 to 36 inches) was unknown to me, and the vast flat plain made the actual distance difficult to judge. I took my time and held quite high. When the smoke cleared, we saw that I had broken his leg. By the ruckus from our group, you’d have thought I’d shot a 42-inch buffalo! Well, maybe a 40-inch one.

Bagging that goose for dinner impressed the hunting team more than any other trophy I took in 21 days. As much as I would like to be considered a great long-range shot, I think my dad’s saying, 'Sometimes it’s better to be lucky than good,' came into play here in the African bush. 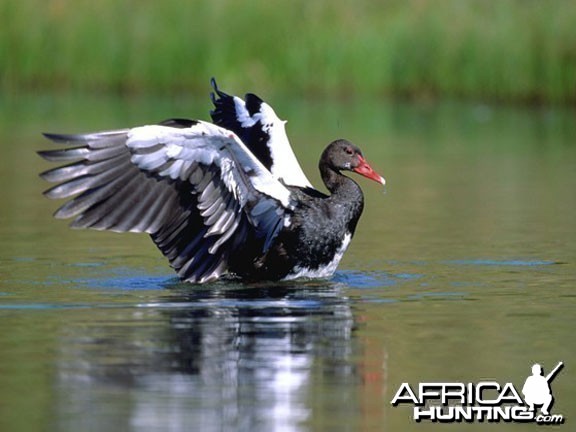 The distinctive red-billed spur-winged goose is Africa's largest waterfowl. Fronterhouse 'took' his with his .500 BP Express, which inspired much admiration from the hunting team.

Finally, in the pre-dawn hours of the next-to-last day of our safari, Sherdell, the tracker Nyula, Bev, and I were in a lion blind, our eyes fixed on a mature male uneasily pacing nearby our bait. As we sat waiting for the sun to rise, we could see the lion through our binoculars, but just barely. Still, I could sense that he sensed us. In my head, I felt sure that the figures were going to add up to my taking three out of the Big Five with my .500 on my first safari.

Then Sherdell whispered, “I can’t see him. This is definitely not good! I am going to have to turn on the light. Be ready, just in case.” Wham! I am blinded by the sudden light and can’t see a thing as I peer intently through the blur, looking for the lion. Then Sherdell swings the light to the right, and I see simba coming straight towards us in a dead run! As I blink rapidly to try and restore my vision, I hear his tremendous roar. Looking down my barrels, I see his two huge yellow eyes go by us at about six feet. Then total silence as he disappears. Nervous laughter erupts from inside the blind. Bev and I look at each other, and in that instant, I make an appointment with Bwana Simba for 2004. But as they say, “That’s another story.”

The final tally for Bill’s first safari with his .500 BPE was one Cape buffalo, one leopard, two zebras, one bushpig, one serval cat – and one spur-winged goose. In his words: “Fantastic!”

Bill Fronterhouse was born in 1947 in New Mexico and grew up hunting and fishing in the American West, then travelled around the world during his four years with US Navy. After marrying his wife and hunting partner, Bev, they moved to Alaska. “Our first of many trips to Africa was in1998. Since then, we’ve pursued our passion for hunting, but hosted many humanitarian efforts as well.”
Last edited by a moderator: Dec 1, 2016
African Hunting Gazette
You must log in or register to reply here.

…And One Spur-Winged Goose Tanzania

One Picture, One Story

On An Elephant Hunt With a .500 Jeffery In Botswana

Little Camper On The Prairie