"One and Done" Rifle Sickness?

I was wondering if there was anyone else that has the "one and done" rifle sickness that I have?? For some reason, I have a policy that once I shoot something with one of my rifles; it goes into the back of the safe until all of my "virgin rifles" have an opportunity to draw blood. There are very few exceptions to this policy, normally due to traveling and hunting multiples on the same hunt.

I have a buddy, that does the same thing . I have a bunch of virgin guns but they will all get to play some day. I love some guns more than others.

LOL - I could never be that organized! I am more of the "as the spirit moves me" persuasion. Besides, the intended game on my next hunting trip likely wouldn't match in caliber the next rifle in the rotation. Got to be challenging if you have a buff on the dance card and that .308 is up next.
"We sleep soundly in our beds because rough men stand ready in the night to visit violence on those who would do us harm" American Novelist - W. Churchill

I'm kind of the opposite, I was a one rifle person (vintage BDL in 270) for over 30 years, killed everything from crows to grizzlies with it. It's my youngest son's now. I have a 500 Jeffery and a 270 Weatherby. The 270 Weatherby never goes out, I use the 500 for everything, so far mule deer, feral hogs and elk, should've taken it on my brown bear hunt but took an XCR II in 375 Weatherby which worked fine (it also now belongs to my youngest son). The oldest has a LH 270 and an LH M70 Classic in 416 Rem.

Rob44 said:
Sounds like a Hell of a way to Build a Rifle collection
Click to expand...

It is working now....that is until my wife gets a good look in the safe, then I will have some explaining to do. I hope she does not get to interested.

Red Leg said:
Got to be challenging if you have a buff on the dance card and that .308 is up next.
Click to expand...

Challenge would be an understatement! I guess I would then have to beg the wife to let me buy a 416. It would probably only cost me the amount of the rifle and then the 67 Mustang Convertable she has been bugging me about!
D

I have a couple of rifles that need to be blooded. Plan to take 3 with me to pronghorn hunt this year if I get drawn for 3 tags. Plan to use one for deer also and maybe another on a pig hunt.

Most of my stuff is paper punchers but thats the way I made them,,I may do some Varmitt hunting in the Dakotas next year and I'll make use of my 223 and 22-250 then
Be Yourself Everyone Else Is Taken

But, there's more to it than that.

After my first safari, (Namibia, 2002 or 2003....can't remember which year exactly but, it was in April of one of those two years), I began experiencing what you describe.

I returned home and within 3 years, I sold about 100 guns, the custom Mauser (.300 H&H) I took to Namibia, plus Remington Model 700s, 721s, 722s, 760s, surplus Mausers, Springfields, Enfields, revolvers, pump and semi-auto shotguns, a dozen or more lever action rifles with receiver sights on them, two Garands, two M1-As, etc, etc., a snow machine (snowmobile), a kayak, you name it, to pay off that first safari and to make ready for the next one (instant Africa junkie).

In other words, many of the ones I have bought or traded for, I have gotten bored with, way before I found the time or money to bloody them, or even fire them at a paper target.

A few of them I have shot critters with and then I sold them, just like you said.

For me, it's mostly rifles.

For whatever reason, shotguns and handguns do not do that to me quite as much.

When I get a new gun I get a strong urge to shoot a critter with it to sort of devirginize the gun.
Specially before.
But when done with that, I am not done with the gun and leave it in the gun safe.
If I was to do that and buy a new gun every time I was to go out and hunt and shoot a critter, I would be in huge financial problems.

But I tend to take out the same gun almost every time I am going to hunt.
I guess I should not own a gun that I feel fits so perfectly for much of my hunting
Then the other guns would see the outside of the gun safe much more.

I'm kind of "one and done" in that I'm probably going to sell my 270 Weatherby even though it's a very nice rifle and I've always wanted one. Gonna use my 500 Jeffery on everything from jackrabbits to cape buffalo. The 500 Jeffery and my Springfield Pro 1911 are all I need these days. Of course my boy's have already split up the rest of my safe full of guns as it should be

No, I don’t subscribe to your theory. I probably use my .308 for most hunting. Walking the creek but sometimes the .300wm

From the car I have a Tikka CTR in 7mm-08 that I find big enough and easy to shoot quickly and accurately from the car. A Truck rifle I think they say in the states. She is ugly and I don’t care if I mark the stock on that one.

I am having a lightweight .280ai built for regular carry so that should get a bit of use I hope.

I have a .223 that has not been out in a while but has taken, cats, foxes and pigs but with a 26”barrel and 8x56 scope it’s mostly my spotlighting rifle.

So each has a purpose.

I would like more but I think I will save the money and hunt more.
Chris “Australia"
Dreaming of Africa, Hunted Africa, 2020
The website made me do it!

All of my rifles have drawn blood except for one, a Ruger #1 in 270 Weatherby mag. I am keeping her safe and secure until I draw my Wyoming pronghorn tag.

But I am kind of the same way with my knifes. But I'll use one knife for a year. It will clean deer, elk, javelina, fish, and what ever else I happen to bag that year. I will then put a razor edge onto it and move on to the next knife that I purchase.
If you don't care where you are, you are not lost.

Hmmmm,
An interesting theory. However, not 1 I ascribe to completely.

I do have a couple of project rifles that have not shot anything with But most of the guns that I have in my safe I have made a concentrated effort to shoot something with. Whether it’s an air rifle, shotgun, even a handgun. I have not been completely successful, but it is my goal to kill something with every rifle I own. It gives them...,.
Purpose.

Kinda like my wife and shoes except if I ever find out how much she has spent I might kill her!
I have favorite rifles that get lots of use, some that get used when the weather is bad and some hand me downs that are special for who used them before me. They are still in good shape and waiting for their next assignment.
I also have a couple “lesser” quality rifles that are loaners when a neighbors kid needs a rifle for his first deer or elk hunt.
Then there are less often used specialty rifles, the .375 wby in case I ever hunt a big bear or buffalo or the long range 7mm stw. Or the .17 hmr that taught my kids how to use a scope. If I like it, it will be around forever, if I don’t, it gets sold. And I’m always buying and selling just to see what I fall in love with! And some I buy just for taxidermy! 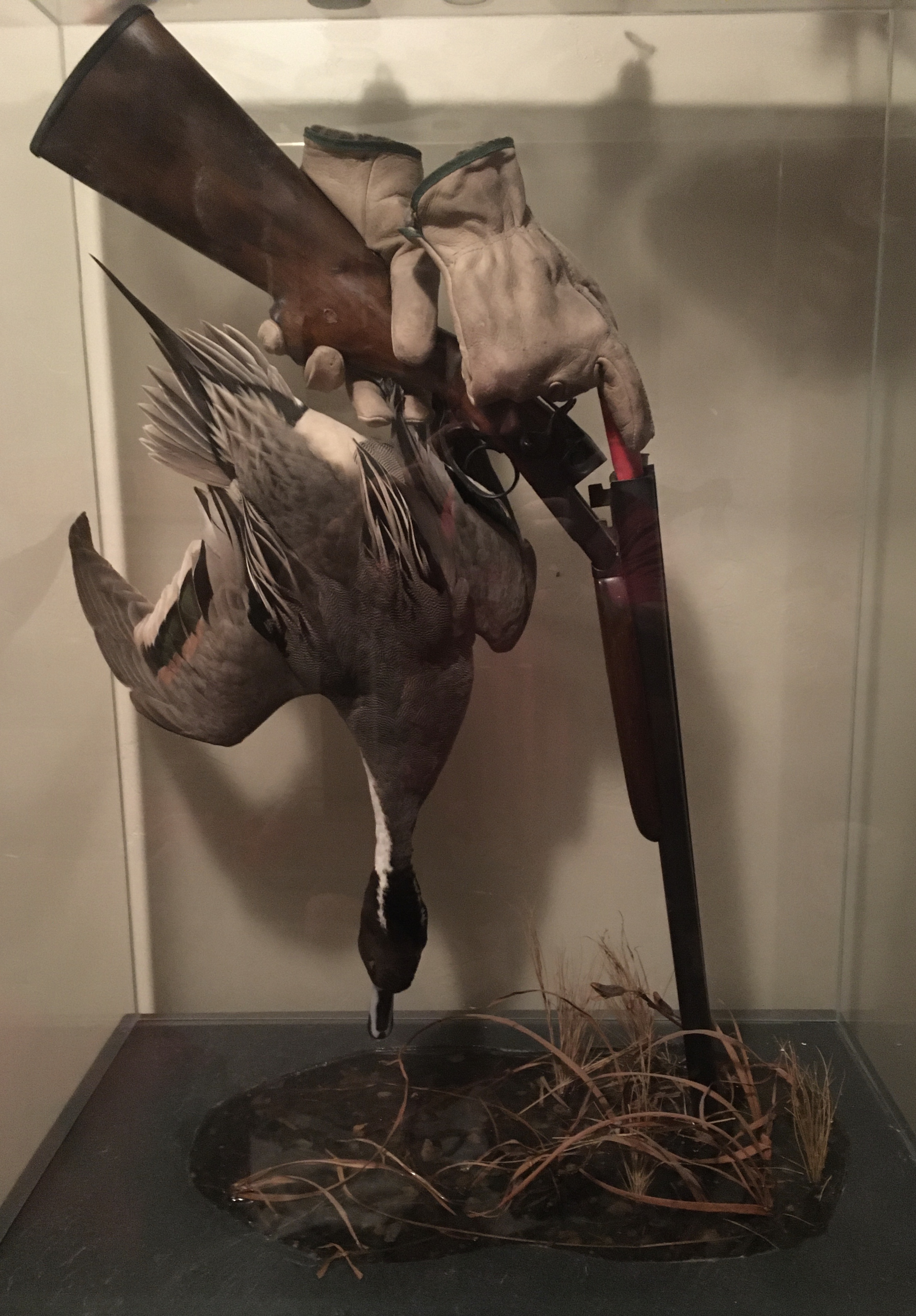 Grady said:
It is working now....that is until my wife gets a good look in the safe, then I will have some explaining to do. I hope she does not get to interested.
Click to expand...

@Grady
Easy fixed get her interested in shooting and each time you go out together just tell her you bought a new gun to try.when she's used all the ones in the safe you can get more without her complaints.
To easy just think outside the box.
Bob
You must log in or register to reply here.

Rickmt Justbryan Rickmt wrote on Justbryan's profile.
What is your new shorter rifle? Thanx Bryan !
Today at 3:16 PM •••
R
raamw neckdeep raamw wrote on neckdeep's profile.
Supply your address so I can get shipping Paypal Friend (no ) fee) is fine
Friday at 10:09 AM •••