On Taxidermy Snappy Ways To Mount Your Croc

On Taxidermy - Snappy Ways to Mount Your Croc
by Fiona Davern

Not everyone wants an 18-foot crocodile with a half-devoured lechwe in its jaws in the trophy room. Here are some ideas for mounting your impressive trophy – without driving the family out of the house.

It’s no coincidence that crocodiles look prehistoric, instilling both terror and admiration: Crocodilia is an order of large reptiles that appeared about 84 million years ago in the Late Cretaceous Period and, unbelievably, are the closest living relatives of birds. They inspire both fear and fascination, which is precisely why this magnificent creature is an awesome presence in the trophy room.

Rocky Cooper, Brush Country Studios, Houston, Texas, believes that a big croc is a grand trophy room addition for several reasons: “There is no doubt that the reptile is spectacular to look at. He is our present-day dinosaur. A giant croc is also most likely older than the hunter stalking him. He is very capable of killing everything in Africa, including humans, with the exception of a fully-grown elephant, hippo or rhino.”

“Most PHs say that a 13-foot crocodile is the minimum for trophy consideration,” says Rocky. “My personal crocodile was close to 17-feet long, and he looked immense lying half out of the water.” Adds Erik Schenk, Wolfgang Schenk Taxidermy, Daubach, Germany: “Most hunters want to have a crocodile in their collection although, due to lack of space in their trophy rooms - especially in Europe, many do not do full body mounts.” 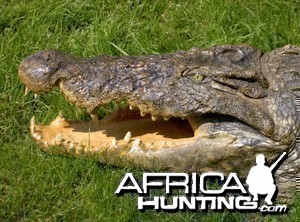 Not only do crocodiles have to be 'wet tanned' because the skull remains intact during the tanning process, it is often damaged from the shot, and has to be rebuilt, along with the teeth. This 15.3-foot croc was mounted by Wolfgang Schenk Taxidermy.

What makes a crocodile trophy so desirable? “Fear! It’s the ultimate killing machine and has been for thousands of years,” says Tony Psaila, Spirit Of Africa Taxidermy, Howick, South Africa.

According to Rocky, a big crocodile is an incredible challenge for a taxidermist. “They have to be wet tanned because the skull remains intact during the tanning process. They do not stretch or shrink, so the manikin has to be constructed precisely to accommodate the skin. The head is usually damaged from the shot and has to be rebuilt by the taxidermist, and the teeth all have to be rebuilt because of the tanning process.” 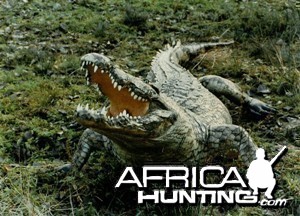 The typical attacking position of a huge crocodile adds drama to the trophy room. Most PHs say a 13-foot croc should be the minimum for a trophy-sized croc. (Wolfgang Schenk Taxidermy)

Psaila informs: “Because the skin is very lumpy, it is extremely hard to flesh, and scale loss is always a problem.” And Schenk adds: “The biggest problem is that one cannot remove the skin from the skull. Thinning down the skin has to be done by hand before tanning, and the head has to be left attached, which makes it even more difficult. If not properly shaved before tanning, the skin will crack after mounting.”

“Technically, each crocodile has to be artistically sculptured from a piece of foam, as there are no standard moulds available, because all crocodiles vary in size and width. And as with any taxidermy, proportion is of utmost importance,” says Kevin Cooper, Images of Africa Taxidermy, Johannesburg, South Africa.

Schenk notes that it is important for the client to already have an idea in mind about where to place the trophy: “This way, the client can give accurate instructions: whether the croc should look left or right, in an ‘S’ shape or straight. It’s also important to specify if the head should be raised off the ground. The mounted crocodile can then lie flat on the ground or hang on a wall.”

Psaila adds that crocodiles can be mounted in many poses, but the most common is walking or lying. “Of course, they always look good in an action pose, like biting into prey. I once saw a life-size croc mount in a pedestal pose chasing an otter.” But according to Rocky, action mounts require tremendous steel armature and foundations.

Achieving these action mounts is, therefore, no easy task. “While the event itself is over in seconds, it takes our taxidermy team weeks to depict a croc attacking its prey,” he adds.

So while action mounts look impressive, John Peacock, Taxidermy Africa, Humansdorp, South Africa, recommends selecting a simple pose in order to ensure the best results. Rocky suggests creating vertical mounts for big crocodiles, because they’re easier to place in showrooms or trophy rooms yet also show the beauty of the creature. He agrees that it’s important to determine the available space for the mount before beginning its design.
As far as field preparation is concerned, crocodiles present a unique problem and need extra care. “This is the only animal which has the skull attached to the skin if it’s made into a full mount. Because of this, the eye and brain cavities need to be properly removed and cleaned, which is very time consuming, and salt needs to be poured inside to prevent rotting and maggots. From the top of each leg to the end of each toe, a thorough cleaning has to occur to prevent rotting. I suggest a salt-water bath for the skin for five to six hours in order for the salt to penetrate the skin properly. After this the skin should be removed and fine salt added,” advises Kevin Cooper. Rocky Cooper agrees, saying, “The very best PHs all soak their clients’ crocodiles in a saltwater solution prior to salting. On a crocodile, this ensures tightening of the very thin skin on the skull.” 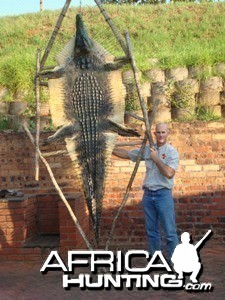 This 'dog-eating' crocodile found its way into a private water dam that Tony Psaila of Spirit of Africa Taxidermy mounted as an interesting rug mount for the trophy room wall.

Schenk observes that the most difficult part of the field preparation is preserving the skin attached to the skull. “It’s advisable to cut the skin round the nostrils and open that skin like a toilet seat, and then remove as much tissue as possible through that hole, the holes under the skull, and through the eyes. The head must then be salted very well, with salt pushed into the nostrils, eyes and all holes under the skull. The rest of the skin has must also be well salted, like any animal skin, but it must be kept damp. Belly skins which are to be made into leather should never be allowed to dry.”
According to Psaila, highly accurate measurements should be taken before the crocodile is skinned: “Measure the total length and circumference at intervals of approximately 20cm.” He also recommends taking plenty of photographs for reference, and applying insect repellent on the inside of the skin.

Rocky Cooper says the biggest crocodiles they see come from Tanzania, Zimbabwe, Mozambique, and more recently from Ethiopia. “The current world record is an 18-foot 3-inch giant from Zimbabwe.” Peacock says that the largest croc mounted by Taxidermy Africa measured close to 15 feet. The biggest crocodile Schenk ever mounted was from Tanzania and measured over 17 feet. Kevin Cooper explains that in general the biggest crocs are from remote areas where an abundance of food is found, such as the Zambezi.

How many crocodiles do taxidermists mount on average? “Well, it’s hard to say, but in five years I’ve probably mounted 10 three-foot-plus baby crocs from crocodile farms that we made into rug mounts for clients. However, we’re making a rug mount of one well over 8-feet long right now,” says Psaila. Peacock says Taxidermy Africa mounts roughly two to three per year; Kevin Cooper mounts around eight on average. Schenk mounts a comparatively large number: 12 to 15 per year. According to Rocky Cooper, “The number of crocodiles we mount is growing every year. In 2006, we mounted close to 20. The biggest we have mounted measured 17 feet 10 inches, also from Tanzania.” 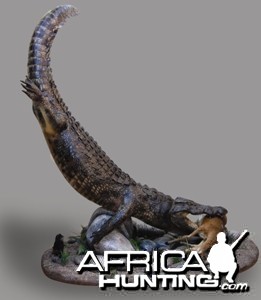 Although it takes only moments for a crocodile to grab its prey, it takes a sturdy steel armature - and lots of time in the taxidermy studio - to create mounts like this 13-foot croc from Zambia, mounted by Field & Stream Taxidermy.

How can you tell a male from a female crocodile? Rocky Cooper says that because large crocodiles are very wary, they are usually observed from a distance. “A big male croc differs greatly from a female. His head is much wider than the slender snout of the female. His abdomen and neck will be considerably larger. If a male is lying next to a female and he does not look larger, then he is not yet a trophy specimen.”

But if telling male from female purely by observation is impossible, Peacock adds: “There are no visible sexual organs, but the penis will drop out when the dead crocodile is suspended.” Kevin Cooper identifies another way: “Above the eyelids there are protruding bones which are more defined on the male.”

Side Notes: Importing Crocodiles
For American hunters, according to the website of the US Fish & Wildlife Service (www.fws.gov): The Nile crocodile (Crocodylus niloticus) in Botswana, Kenya, Malawi, South Africa, Zambia, Zimbabwe, Ethiopia, Madagascar, Mozambique, Tanzania, and Uganda are listed in CITES Appendix II. “You do not need a CITES or ESA (Endangered Species Act) permit from us to import personal sport-hunted trophies… from Appendix-II populations provided …” However, CITES export permits and tags are required.

For importing sport trophy crocodile into the European Union, there are no restrictions from popular hunting destinations like Zimbabwe, Zambia and Tanzania, provided trophies have a CITES Export Permit and a EU Import Permit.

"Check with your hunting company, taxidermist, or government office before you pull the trigger,” reminds John Jackson III of the Conservation Force that recently reported Namibia’s downlisting of crocodile to Appendix II. (Note: “The commercial exhibition of a Nile crocodile hunting trophy from Namibia at a hunters outfitters trade fair is prohibited,” according to the CITES website.
Last edited by a moderator: Dec 1, 2016
African Hunting Gazette
You must log in or register to reply here.