For those who grew up watching Bugs Bunny...

"OH THE AGOOOOOOONEEEYYYY!" (Agony. Get it?)

If you didn't, Go youtube the greatest cartoon of a generation. All the voices are done by one guy - Mel Blanc. The humor is still current and fabulous.

I bought a Double Rifle.

Let me repeat this.

I BOUGHT A DOUBLE RIFLE!!!

This is a multiple decades old dream. It must be near 4 decades of dreaming that one day I would own a Double Gun. I spent far too many lustful nights dreaming of porn...two barrels, regulated...and oh that fine wood...

I spent a weekend at an SCI show looking for just that one rifle that would shoulder perfectly. That one rifle that I would be able to use for more than just "one thing". I didn't want a one-trick-pony .450 or .577. I wanted a rifle I could use for 90% of Africa and 100% of the USA. Something that came to shoulder like an extension of my middle finger in traffic commenting on the world of vehicles around me. Something that none would expect...something...different.

I just bought a Merkel 141 in 9.3x74r. Grade 4 wood - dark, smokey with lots of character and a bit of fiddle, set forward trigger and heaven upon heavens, ejectors! (*I would have been ok with extractors on this one, no question.) And it already came with a decent scope - a Burris 1.5-6x Euro-D with an appropriate #4 reticle.

It came in today at my shop and I hit the road to sign up for the idiocracy of the California 10 day waiting period. Filled out my paperwork, signed away my life, paid my taxes. I looked at the guys across the counter at the shop, pulled a full box of heavy ammo labelled "DANGEROUS GAME" out of my back pocket (*Yes, it barely fit - with half of it sticking up like a candy-bar) and asked...

I walked the bare 40 feet through double sound proofed doors into the range and laid my immaculate Merkel 141 on the bench. Two rounds went "THUNK THUNK" into the chambers and I closed that tight almost virgin action closed. 50 feet away the target hung at the end of a long cable, waiting for a payload of nearly 560 grains of lead in a pair of brass cylinders to do their duty. I braced for inevitable impact of uncontrolled recoil and volumetric pressures shattering double panes of glass...

I turned to look at the Gents behind the counter. They had scarcely looked up.

I blinked once, twisted the action and pinged two spent cases over my shoulder and into the glass windows behind me. One guy cocked an ear. I noted my shoulder was still intact and not dislocated or otherwise broken. Nothing else had transpired.

My next round I thought I'd try the set trigger. I'm not sure where that bullet went - my target had only two holes in it from the previous bought of insanity trigger pulling. I pushed the Set Trigger again and I think a butterfly in China flapped it's wings as the round in the reloaded chamber went off again.

I put another six rounds downrange noting that the barrels became very warm at 2x2 rounds fired and just plain HOT at 3x3. That skinny little barrels that made a rifle swing like a .410 shotgun after quail also heated up like the sun.

I put a total of 10 rounds downrange and smiled at the ghastly groups downrange. I didn't care. I still don't care.

I am now the proud owner of a magnificent Merkel 141 Double Rifle in 9.3x74r.

I cased the gun, handed it back to the guys for the mandatory 10 day waiting period and closed out.

Back at home I opened the computer to pull down the pix from the web of this beauty to show you guys. I mean, It doesn't exist without Pix, right?

And the pix are gone. The dealer pulled the pix. And I didn't take any at the range.

And the 10-day waiting period has the rifle locked deep in a dark safe, waiting my return on June 1.

awesome...
the excitement is definitely coming through in your writing.
Congrats on a great rifle, I too have a 9,3x74 on my short list.
PICS, PICS, PICS... as soon as you can!
Enjoy the new toy

That's a very handy, and useful, caliber in a well made, solid double.

I am pretty sure I believe this story without pictures. Way too excited to be a fake.

At least you got to shoot it before waiting.
Bank robbers always go for doubles!

That is one of the world's finest hunting calibers.
My closest friend has used a Ruger #1 and a couple years later, a Simpson & Son Drilling in 12-12 over 9.3x74R for two safaris now.
He calls the 9.3 "a big stick in a small bundle" for its ability to absolutely clobber large animals without the price of heavy recoil.

Congratulations on this.
Are you going to hand out cigars as any proud father should?
I did just that when I bought my first DR (in fact a Merkel).
Well anyway, we're all excited for you.

Sounds like your a proud daddy. Looking forward to the photos.

Congrats.
And here I am, returning to Africa of many faces;.... the sloe-eyed temptress with flowers in her hair who stole my youth and my heart, and left me an old man with a kaleidoscope of conflicting memories of many dashed hopes and some fulfilled dreams. E. Echols

Thanks Guys! Yes indeed, you know I'm going to just have to go out and buy cigars for the evening!

I'm working on photos but I suspect I'm not going to be able to post anything for a bit. I really do wish I'd snapped a cam-phone pix. I did think about it for a minute and then said "nahhh, there's better ones I can download." LOL!

The 9.3 was much more like a long boooom than a BAM! Stout but not sharp. I had my fears about the recoil on this one - it has a very minimal recoil pad and it's definitely a light rifle. Scoped it's right at 8.25#, ready to rock.

What I loved about the Merkel 141 was how the iron sights just lined up so perfectly. I've found that Merkel Rifles and their sights all seem to line up just so perfectly with my eyes. Much, much moreso than the other rifles I have in my safe.

I tried a couple shots without the scope mounted and recoil is definitely sharper without the added weight of the scope. I'd not want to make a habit out of shooting it that way but it's not something that needs to be feared.

I'm jealous. One day when I'm all growed up I wanna own one as well. Congratualtions!

Sweet! I found some pix of the rifle! 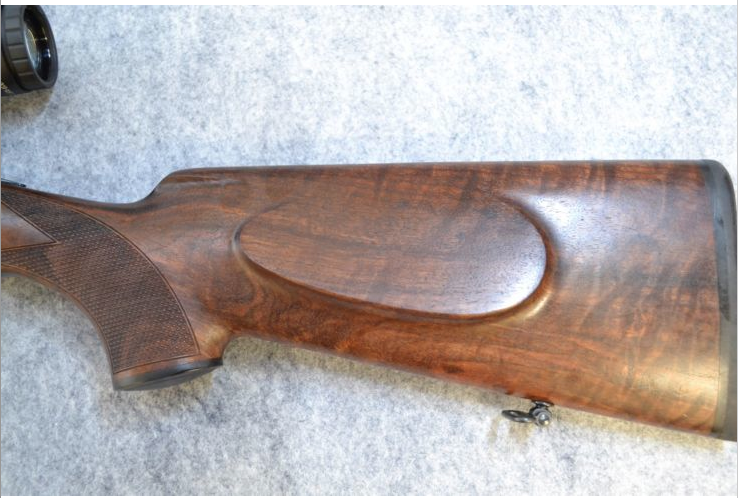 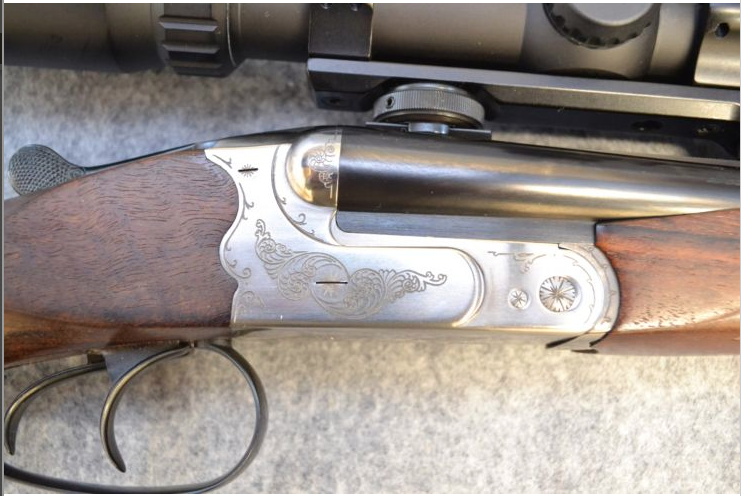 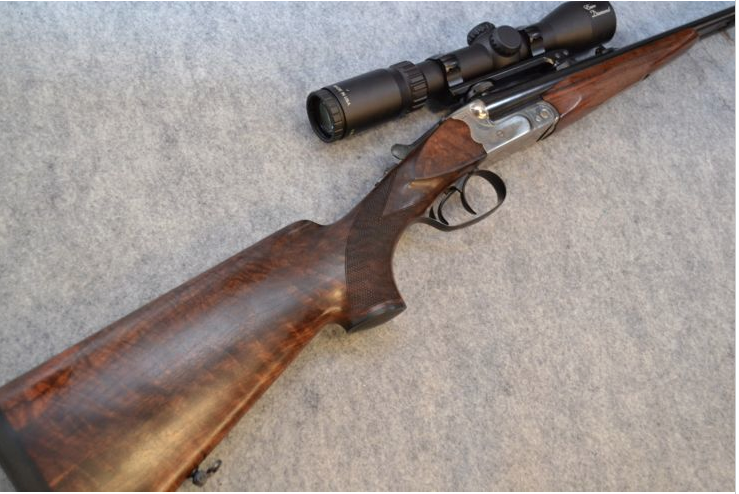 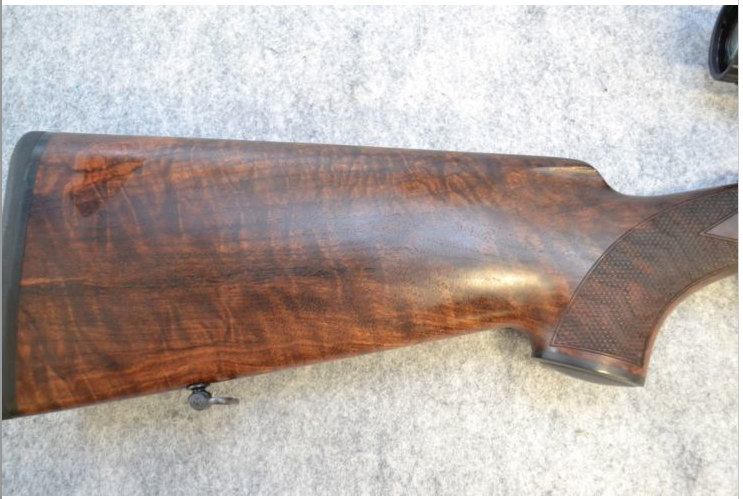 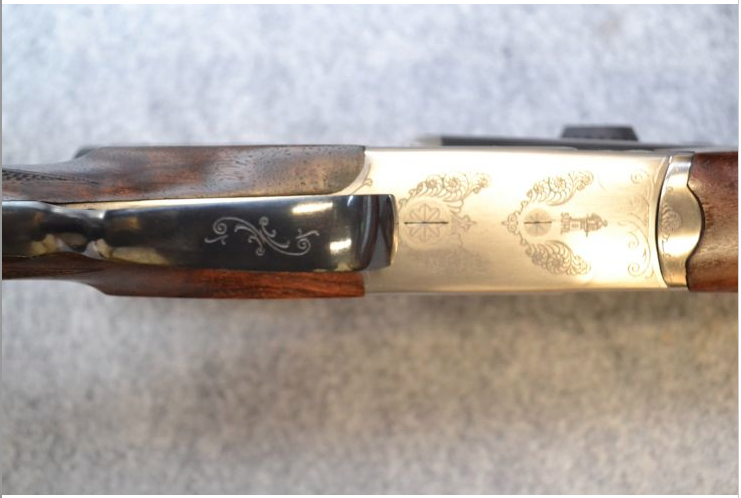 All I can say is this: the pictures just don't do this justice. It's so much nicer in person, the arabesque is really well done and the wood has some great depth to it in the sun. I can't wait to actually get some decent pix to post!
Last edited by a moderator: May 23, 2014
- Robert N.

You are correct, that gun is beautiful! Congrats!

AND A heII of a write up!

ha ha man you mean them words .
I have to ask is your wife jealous , or hasnt she read about your mistress yet?
THE HUNTER; The person that pays over 90% of the cost for the presavation and maintance of wildlife and gets zero credit for it ................

He was very very smart and got a kitchen pass prior to purchase!

yeah mike l read about the smart play up top
but by the write up this this little lady really floats his boat.
just wondering if mrs novi knows she has compitition
THE HUNTER; The person that pays over 90% of the cost for the presavation and maintance of wildlife and gets zero credit for it ................

Wives are multi-purpose! Much more user friendly more of the time.

But there are other times that a good rifle will surpass the wife..

In all honesty, I absolutely love my wife and married a fantastic woman. She encourages me to enjoy the finer things in life and to just plain be me. I got lucky - we are going on 10 years together and life just gets sweeter each and every day.

So far I think I've added 10 - 15 firearms to the collection and she's only wanted a Sewing Machine. It wasn't like I could really say no at that point, right?

Best of all, we will be in Africa together in just about 3 weeks!

I won't be able to take the 9.3x74r with me this time but rest assured, this rifle will draw blood this year!
- Robert N.

damn shame you wont be able to enjoy the company of both your favourite girls in gods country this year
could tell straight up that that your wife was keeper ,when you said how she told you to get the double , mate

PeteG said:
awesome...
the excitement is definitely coming through in your writing.
Congrats on a great rifle, I too have a 9,3x74 on my short list.
PICS, PICS, PICS... as soon as you can!
Enjoy the new toy
Click to expand...

C
Need help on mounts for a Merkel

Merkel 141 adjustment of the barrels

Merkel 141, adjustment of the barrels