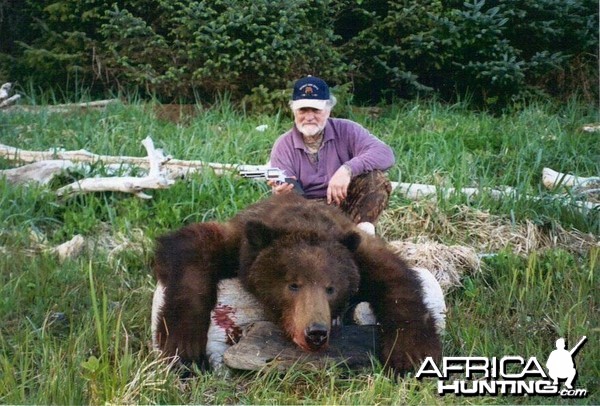 Well, it's been one year since we did our Africa handgun hunt. May 9th and we are off to Alaska to hunt black and brown bear with handguns. we are hunting with Scott Newman at seaguide@alaska. net. 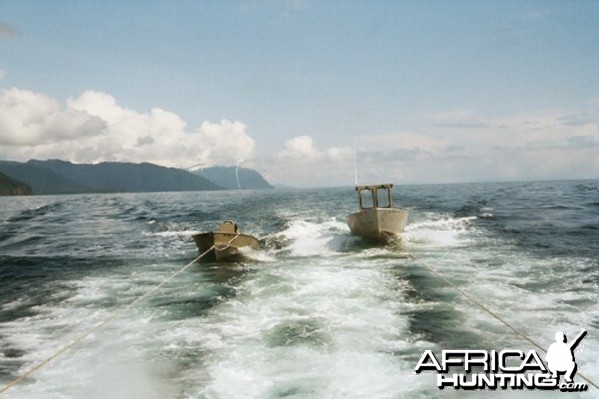 We will be hunting off a 42 foot boat using 18 foot skiffs to cruse the shore line looking for bears. we arrive in Petersburg on Saturday may 9th. weather is in the high 60's. we packed warm Cabela clothes. We are going to die of heat stroke, no problem, the 10th is cold, rainy, windy. we brought the right clothes. Scott meets us at the airport and we go into town to get rubber boots and wine for our ten day hunt. we had another hunter with us who we met in Seattle and got to know him some, his name is Paul, he is from Napa cal, as we are from cal. We had talked to him on the phone about the hunt as he had hunted with Scott five previous times and was a mine of useful info. after shopping it was off to the boat to get settled in and meet our guide, a man named Keegan. Paul was after black and brown bear. my wife Deena was after black bear and I after brown bear. Deena was shooting her contender in 35 Rem and I was shooting my encore in 454 casull. Both guns have 4x scopes. Deena was shooting win, 200gr silver tips and I was shooting cor bon 320 gr. penetrators. we had dinner, visited awhile and went to bed as the next day was our first day of the hunt. because of high seas and windy weather we hunted for black bear for the first two days. we saw many bear but couldn't get the stalks right, the wind would start swirling and we'd get busted. The second day Paul connected with a nice 6 foot black. The weather changed for the better and we left for Admiralty island, and brown bear. Hunting routine was up about 9:00 am, coffee, breakfast, relax, then at 3:30 we'd get ready and hunt in the skiff until dark, about 9:45 pm. Paul with Scott and Deena and me with Keegan. We'd go our separate ways. We always saw bear but finding one that wasn't rubbed was a big problem, some so bad we started calling them leather bears. According to Scott this was very unusual. We saw sows that had nice fur but the forest service doesn't want sows killed, they are legal, but no way. The wind and rain were back and the clothes we had really did the job of keeping us warm and dry. Day three ended without taking a bear. 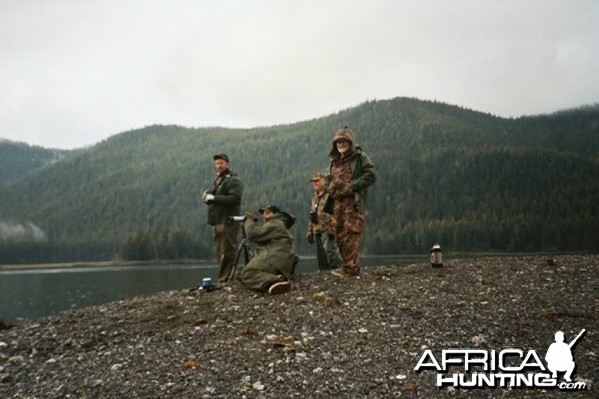 The weather was always changing, blue sky, sunny, then back to clouds and rain. We would always get back to the boat after dark, around 10:30 PM. Dinner was always hot and filling. Keegan was also the cook, we'd have our wine, dinner, discuss the days events, and around 1:00am we'd go to bed, start over the next day. Day 4, out at 3:30 again. We saw about four bears that day but nothing that was big enough. I had already made up my mind that I wanted a nice bear with fur, size didn't matter. Weather was still wet and cold. Day 5&6 were the same, tried a couple of stalks but one bear was a sow and the other was leather. Back to the boat, shower, get dinner ready and compare notes with Scott and Paul. They had a great setup, a dark bear with perfect fur, 8. 5 feet, came within 20 yards of them, they had it on video. Paul said no, he wanted a 9. 5 bear. Paul said hi bear and it took off. No way could I have let that one go. Day, 7, weather took a turn for the better, no wind, no rain. Cold, but clear, sunny. This morning we had moved the boat about a hour away to a spot were we wouldn't see any other hunters. We had seen another boat where we were and Scott wanted to move. Out at 4:00 today. It was a beautiful day, we had our coats off and was really enjoying the beautiful country. We made two stalks and got busted. About 7:00 we spotted another bear that was about 8 foot and had lush fur. I wanted him real bad. We landed the boat and made sure it was secure, started our stalk. The bear was on a point about 115 yards away. The rocks on the beach were perfect for a rest. The bear was behind a large log, I put my gun on my rest[small duffel]and waited until he cleared the log. Deena was using the video and Keegan was asking me if I wanted a bigger bear. I told him, not on your life? The bear move side ways and I shot. The 320-gr. penatrator bullet went clean through both shoulders putting him down. He was still moving so I closed the distance with my guide and finished him off with my back up handgun, a magnaport custom b. f. r. in 454 casull. All kinds of things were going through my mind as I looked at this magnificent animal. Deena came up and gave me a hug, Keegan was smiling from ear to ear, it was a great moment for me. IM 65 and have dreamed of this bear since my early 20s. The pictures started, and then the work started. It was dark by the time we got back to the boat. Paul and Scott came in a half-hour later and had seen bear but nothing he wanted. They congratulated me and the wine flowed. Off to bed late.

Day 8, Deena and I stayed on board that day while Keegan went with Scott and Paul to help. It was quiet and peaceful that day but we were bored. Day 8 ended with no bear. Keegan wanted Deena to get a black bear so bad he suggested we leave the main boat on day 9 early, go back to the black bear country in the big skiff, two hours away, and then go back to Petersburg and check into a hotel and hunt day 10 for her bear if needed. Petersburg was one hour away from black bear country. We accepted his offer and loaded everything up we had and left in the work skiff. They made hotel reservations by sat. phone and even had a pizza delivered to our room, as the town would be closed up by the time we got back from hunting. Weather was great; we saw a bear right off as soon as we reached the hunting area. Deena and Keegan made the stalk as I watched the boat. The bear was about two hundred yards away and they were trying to get closer, the wind changed and good by bear. The rest of the day we spent back in our old area to no avail. Nothing. It was getting time to start for Petersburg if we were going to get there during daylight. Back to the place where we saw the first bear that morning, nothing, we went a little further back and Keegan spotted a nice black, about 7-foot. To the beach we went, Keegan left me with the boat and Deena and Keegan went after the bear. I was keeping the boat in the kelp bed away from the rocks but had time to glass the bear now and then. I lost track of them rite away but could see the bear clearly. It seemed like forever, then while I was looking at the bear I heard the shot, saw the bear go down and get up and run for the trees. It made three leaps and went down forever. I couldn't see Deena or Keegan. The boat was about ready to hit some rocks so I got the boat back to the kelp bed and looked again. Deena and Keegan were on the beach headed where id seen it go down. Keegan got on top of a log and was poking the bear with his rifle to make sure the bear was dead. Success!!!I headed the boat down to where they were and Keegan met me on the beach and made sure the boat was secured. Pictures, pictures, congratulations, etc, etc. I was the proudest man alive, my lady had done what we came there for, what a great hunting partner. She had made a 160 yard shot. The work started and we had the bear skinned and down to the boat in about an hour. 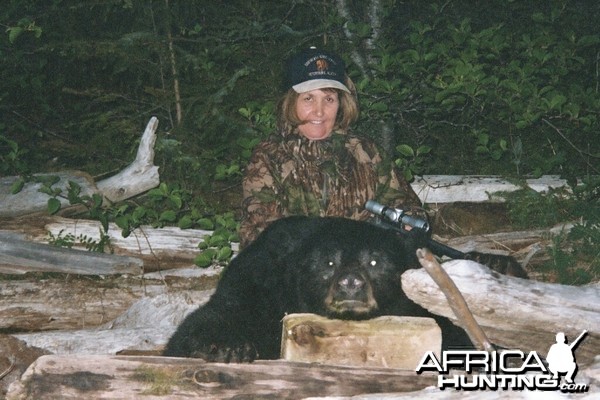 It was now dark and we had to make our way to Petersburg the best way we could, witch was at 4500 r. p. m. Keegan hanging out the side of the boat so he could see the ice burgs, logs, ducks, etc, etc. We left at 11:00 p. m. Got into Petersburg at 1 min. after 12. 00 midnight. To say it was a white knuckle ride is a understatement. Keegan saying, lets see, do we go right or left, added to the fun. The hunt was over and the reality hadn't set in yet. Keegan got us to a liquor store, we bought a couple bottles of wine and then went to the hotel. Had pizza, wine and showers and a good nights sleep. We kicked around Petersburg the next day and did some sightseeing, had a good dinner, back to bed and off to home the next day. The hunt was everything it had to be, we both had a great time and a successful hunt. Scott Newman and Keegan did more than just their jobs! They made a life time dream come true. Now, what's next?Reality of the hunt being over has set in. 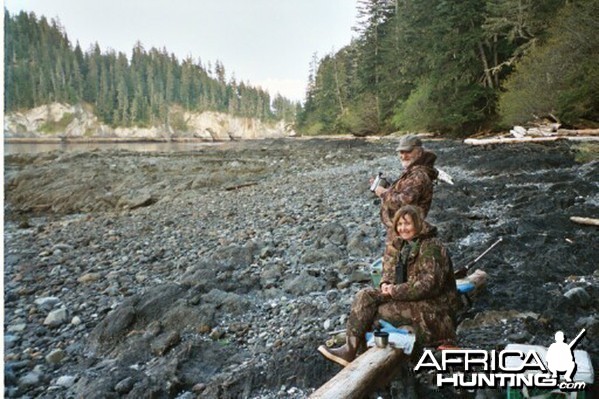 One Of My Scary Grizzly Bear Stories