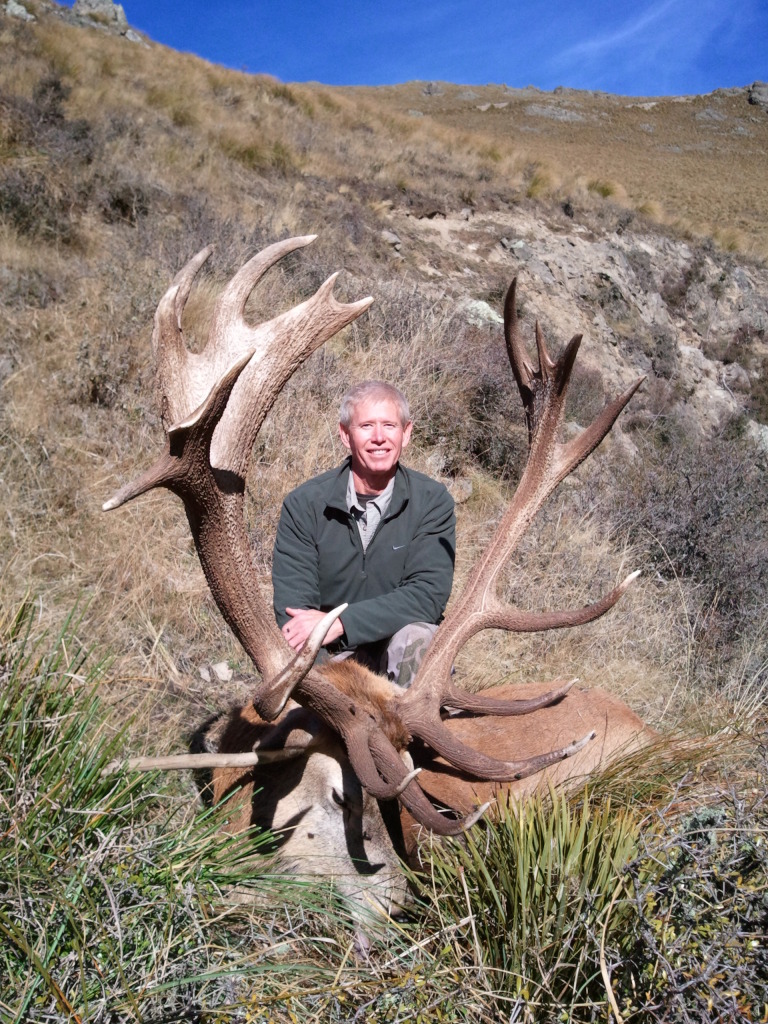 He's been hunting/guiding in NZ for 30+ years and knows his stuff. The operation has just moved into the new 10,000 square foot Woodbury Safari Lodge less than a week before my arrival. Fantastic place. 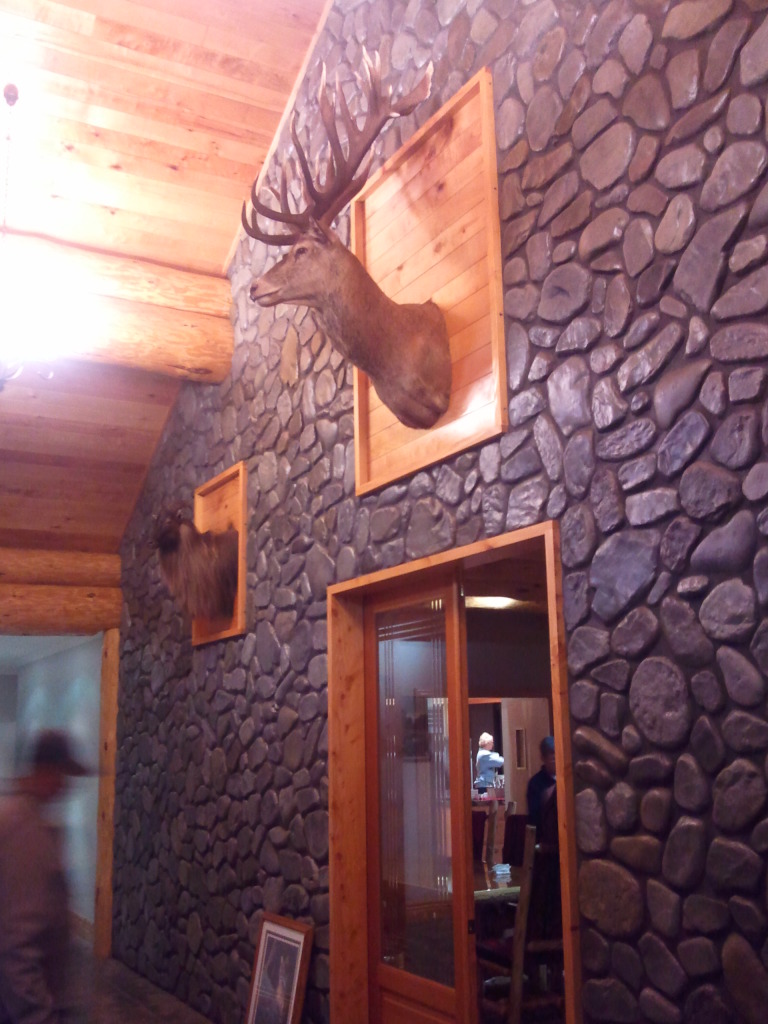 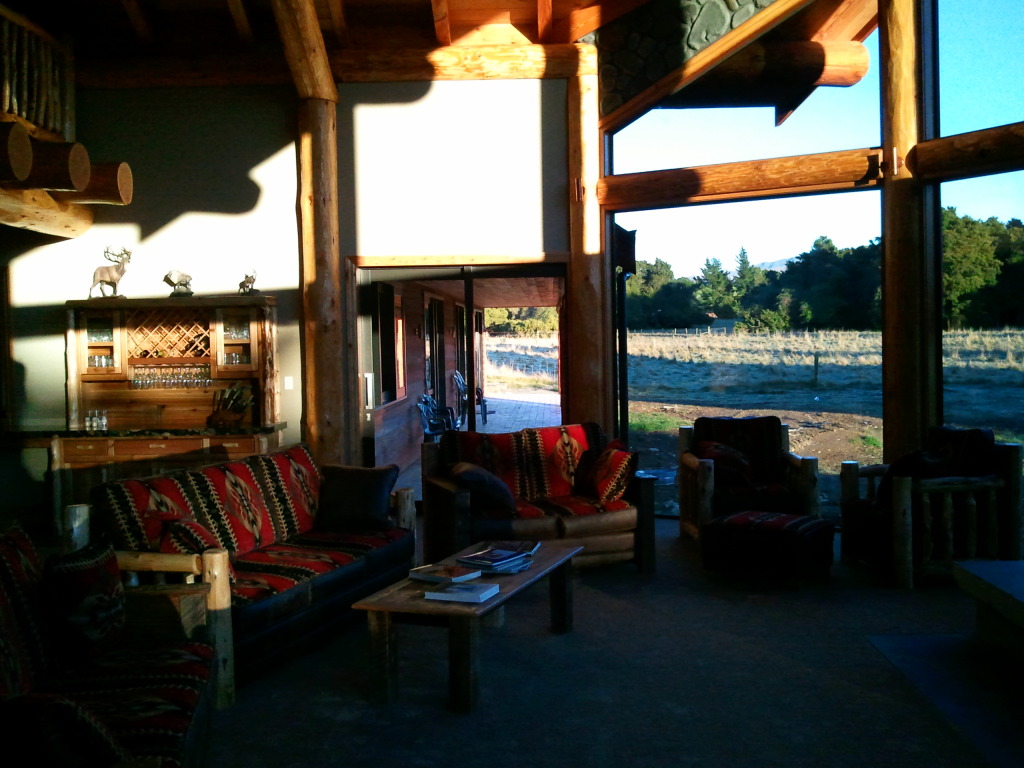 I came to NZ about 10 days prior to the hunt on business (Auckland) and flew to Christchurch on a Monday morning. Was met personally by Lindsay and got to know him pretty well on the 2 1/2 hour+ ride to the lodge. Real treat to stop by the region's top taxidermist along the way as well.

As for the lodge--It was full of hunters (and campfire buzz) the day I arrived. A gal who'd just decided to add a tahr to her bag had just taken a MONSTER bull. Measured the horns at about 14 1/2". She didn't really know what she'd gotten--and the amazing thing was that they'd driven to a place to begin the normally grueling trek up to tahr country and came across this guy. Took him at about 30 yards. The next day--a guy (his picture is on the web site) from the Atlanta area took a nice bull with a BOW. If you don't know--you should--only half a dozen hunters will take a tahr with a bow in NZ in any given year. The guy was a REAL hunter's hunter...and very humble about his success.

I had 3 days to find a 'bronze' medal stag--generally one that measured up to 325" (SCI scoring). My guide, Struan was a real pro--grew up in the area (nearest town Geraldine, NZ -pop. 2300) and hunted most of his life. Since I'd traveled on business I didn't bring a rifle--and was assured the camp had plenty to choose from. Started out with a Tikka .243 (I wouldn't pick that for large elk--but if they thought it was good enough--then so be it)...

Left it at the range after the fifth (not the first!) round had the primer blow out--leaving me with a face full of grit and residue. Had to have been bad ammo...the rifle was fine for the first sighting shots. Hadn't been fired in a year--so the scope needed to be dialed in quite a bit (cold barrel notwithstanding).

So, ended up scouting and glassing most of day 1--which was fine with me. If you're in country like this--you just want to drink it in. 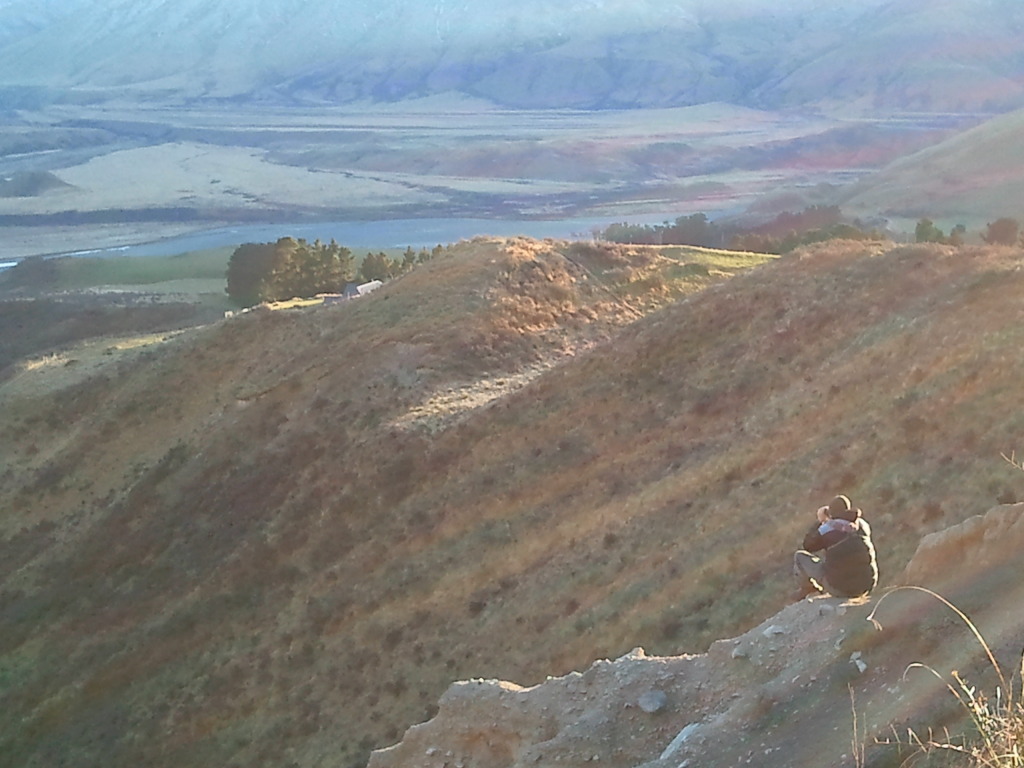 Second day was spend doing much of what I did the first day--scouting. There is no shortage of wildlife here. There we numerous (and tempting!) fallow bucks and
the tahr we in the rut--and abundant. I proud animal if there ever was one.

In the afternoon we took a lift road up and over the mountain ridge we'd been scouting. Got right up amongst the tahr--and a view that pictures just can't do justice to. 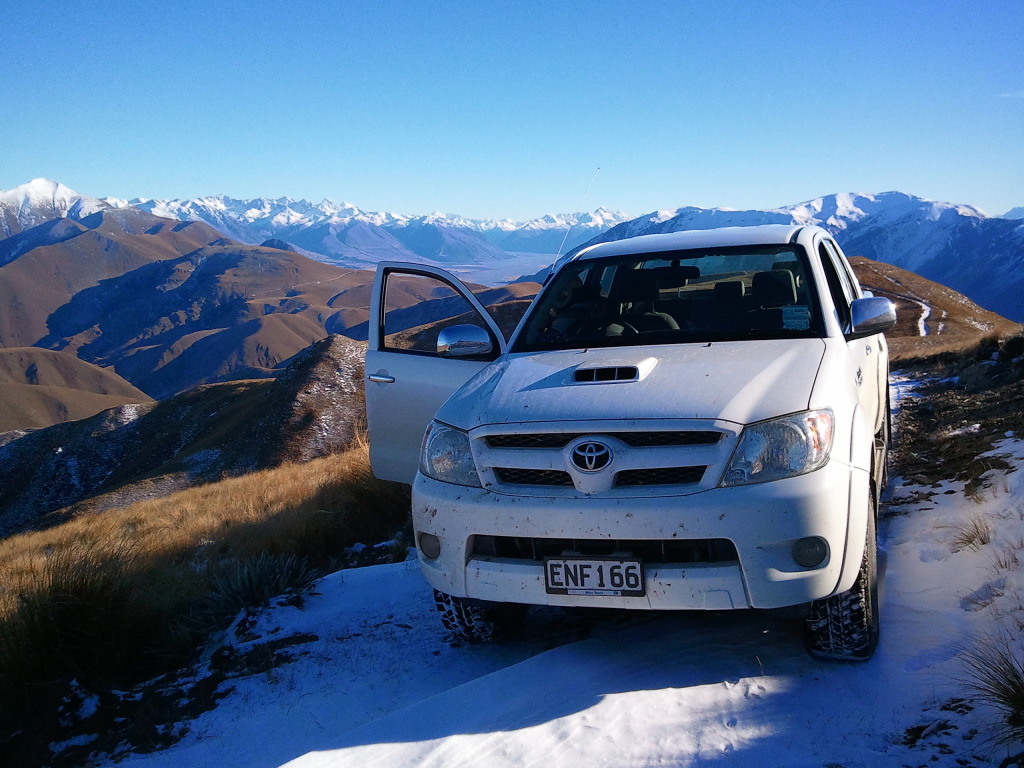 As you can see--we're in the early snow--and we'd been dusted the night before down to about mid-mountain. The hunting area is about 43 degrees south latitude--and going into autumn the days were short. Weather comes from every direction and I lucked out--getting rain/sleet/snow only once (night) and fog once until about 10 a.m.

Put some long stalk/observation hours in on day two. Sometimes we'd sit and evaluate for 30-45 minutes (sometimes at LONG range--600 yards+). The big deal in NZ while 'estate' hunting is the SCI score. If the guide blows it--it gets REAL $$$ in a hurry. The difference between a high bronze (325") and a low silver medal (326") is $1250 and from an upper silver to a low gold--$2000 more. So it pays to be SURE--or you'll be SURE to pay. Frankly speaking--the guides are understandably conservative since they'll take the hit.

As it turns out--there just wasn't a suitable stag in this area within the constraints of the donation hunt. So, after talking with Struan and Lindsay--we agreed on a VERY generous allowance on an upgraded trophy.

Day 3: We'd patterned a few potential stags on day 2 and went back to look for them. After about 4 hours we found a pair that seemed promising. We were seeing them from about 3000 feet away and 1000 feet above and the wind was wrong so we drove around them (about 10 miles total) to a place we could approach them (or where we thought they'd be). Got out of the truck as we had in the past--and walked up to a small crest that dropped off into a basin that measured an acre or so. This was supposed to be a simple scout/evaluation--so no rifle--just glass. As we neared the top--Struan froze--then started backing up S L O W L Y. Turns out we guessed well. I never saw them--just crept back to the truck for the rifle and my pack. Of course--they saw us and started moving away and UP--quartering from our left to right. I was on the 'blind side' of the truck and crept to where Struan was hunkered down and on his glass. We watched them walk up and over a hillock that was about 250 yards away. They were on the east side of a very steep draw--and we were on the other side.

Once they were out of sight--we picked up and scooted up the hill. This is one of those times that I'm VERY glad I'm in shape--but it still kicked my butt. Steep just does not describe most of the terrain. In any case--up we went about 500 feet and brushed up behind a rock and some sedge/tussock. The pair reappeared--still walking way--at about 320 yards--and ready to crest yet another hill. Normally I won't let 'last day' fever factor in--but this guy was just what I was looking for. So, laying down--still panting--heart pounding--I calmed myself as much as I could--got a steady bead and squeezed. BOOM!

Nothing happened. No flinch--no bullet slap--nothing. I looked at Struan--he looked at me and asked: "did you hit him?". My days of competitive shooting taught me to 'engrave' the sight picture at trigger squeeze and to fess up if you had a bad one. I can't say it was picture perfect--but I should've hit him. Range at that time was about 340 we estimated. BTW--I was shooting a camp Remington 700 .30-06 with factory 150 grain ammo (soft points). After about 20 seconds--both stags walked up and over the hill. Damn...

So, we gathered our kit--and scrambled up as high as we dared and brushed up again. It was another 600 yards or so--and took about 5 minutes to settle in. Then we broke out the glass and waited...and waited...and waited. No sense in moving up--if they were there we'd just push them. Recounting the shot--I assured Struan that I believe it was a 'decent' one. After about 15 minutes--we see the tops of antlers--a stag walking up and away--still across the draw. Not him. Then another--still not him. Then a third. Now about 400 yards+ and ass on. Can't tell. He stops and turns to the right--and we see blood. Turns out my behind the shoulder shot (no excuses--but uphill--340 yards and walking) was just forward of the shoulder and into the neck just forward of the shoulder. He was sick--but still standing. The group walked another few yards (now zig zagging up and to the right--same aspect as the shot) and stopped. There was a rock outcropping as a backdrop and I could see him pretty well with the bino's--now to get a good picture on the rifle scope. 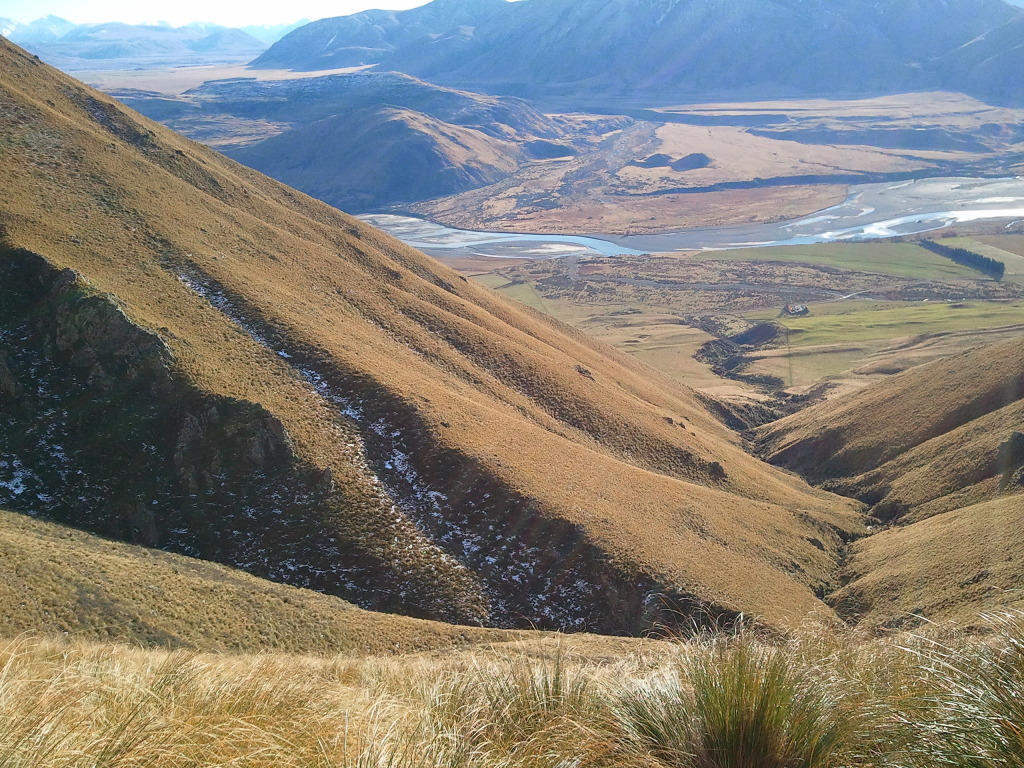 (I began the stalk at the bottom of this canyon--on the far side in the dark ravine that is just this side of the river. Hunt finished above and to the left of where you're looking--same side.)

Struan and I agreed--I had to put another one in him--and soon. I've done long range shooting--but 400 + yards is a LONG poke for me. Nevertheless--I had to try. A down side to borrowed gear is not knowing the 'kentucky windage' gouge. He said "hold over" two feet--and I guessed it to be "X" and was wrong. I hit about 2 feet high and almost shot a horn off (he was looking toward us). Made the point of aim/point of impact adjustment and the next one stoned him. I was elated for about 3 seconds--and then watched my prized trophy start to roll and tumble toward the bottom of the canyon--about 800 feet of sedge/tussock and ROCK. I could hear the rack scraping and bouncing off the rocks from where I sat. No matter--it was a done deal and nothing I could do about it. 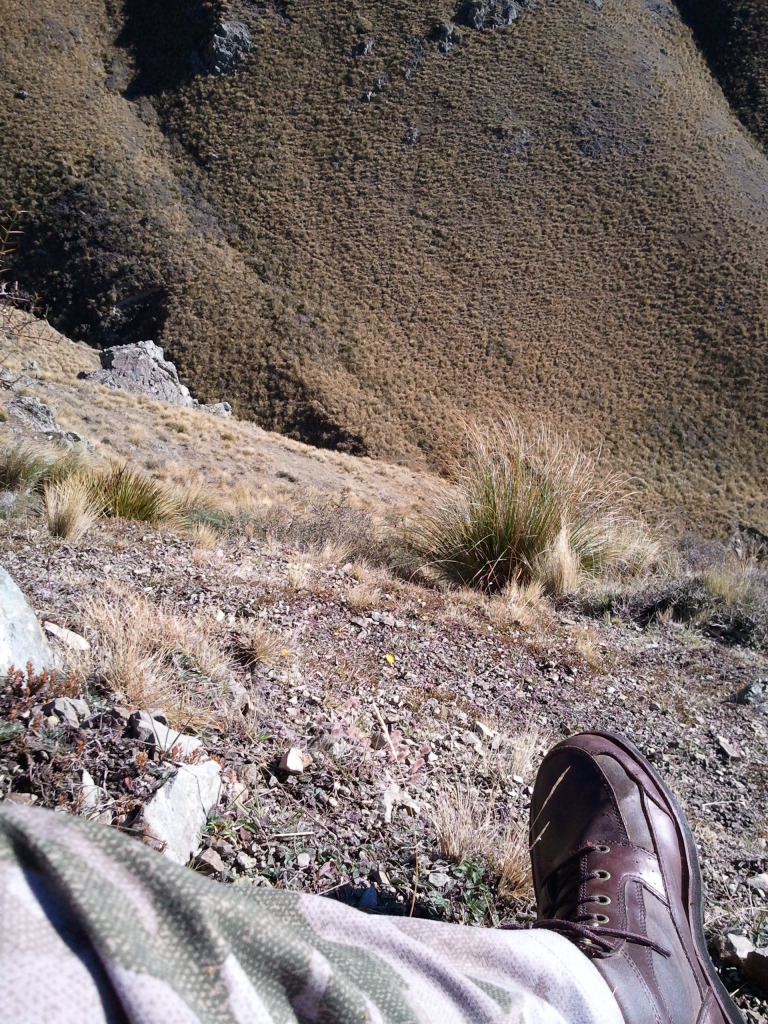 (There is a nice stag down there somewhere) 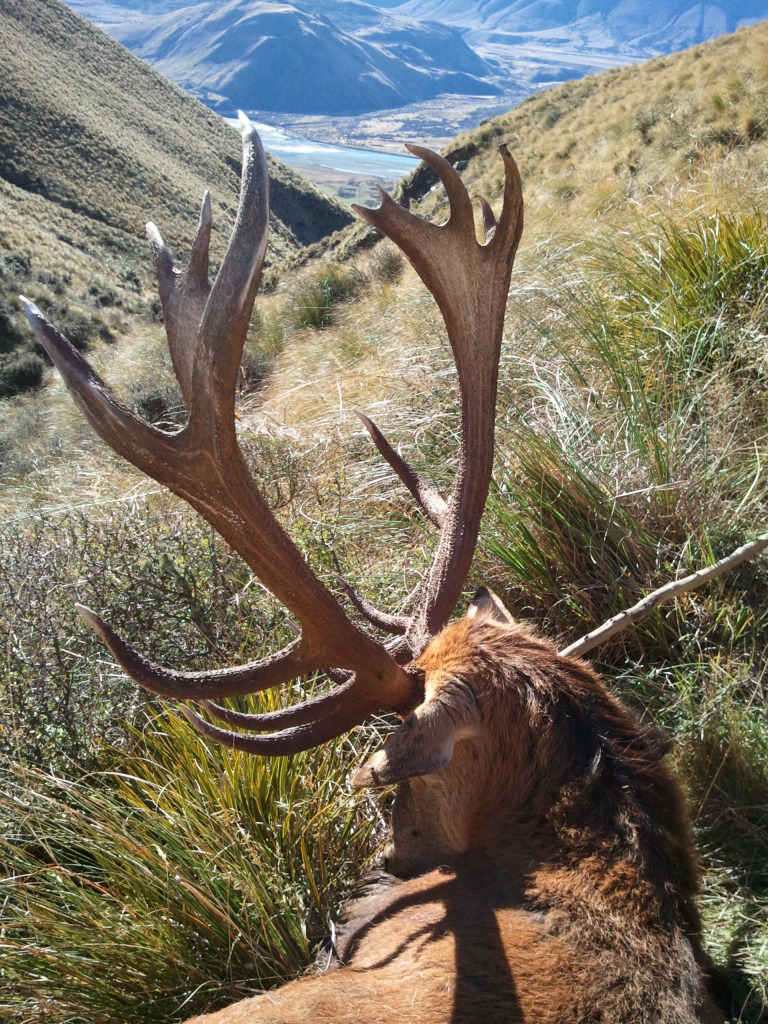 (Found him after about a 1/2 hour hike down--and slipping on my ass a half dozen times--despite the good boots and a walking stick. It's STEEP!)

I squeezed the last shot off at about 12:30 and it was a full 4 hours to get him caped and up to the truck. Thank goodness Struan had a strong back and willing heart. We tagged teamed it up to the road but stopped about 200 yards up where he kindly allowed my to bolt up ahead and take a few snap shots. 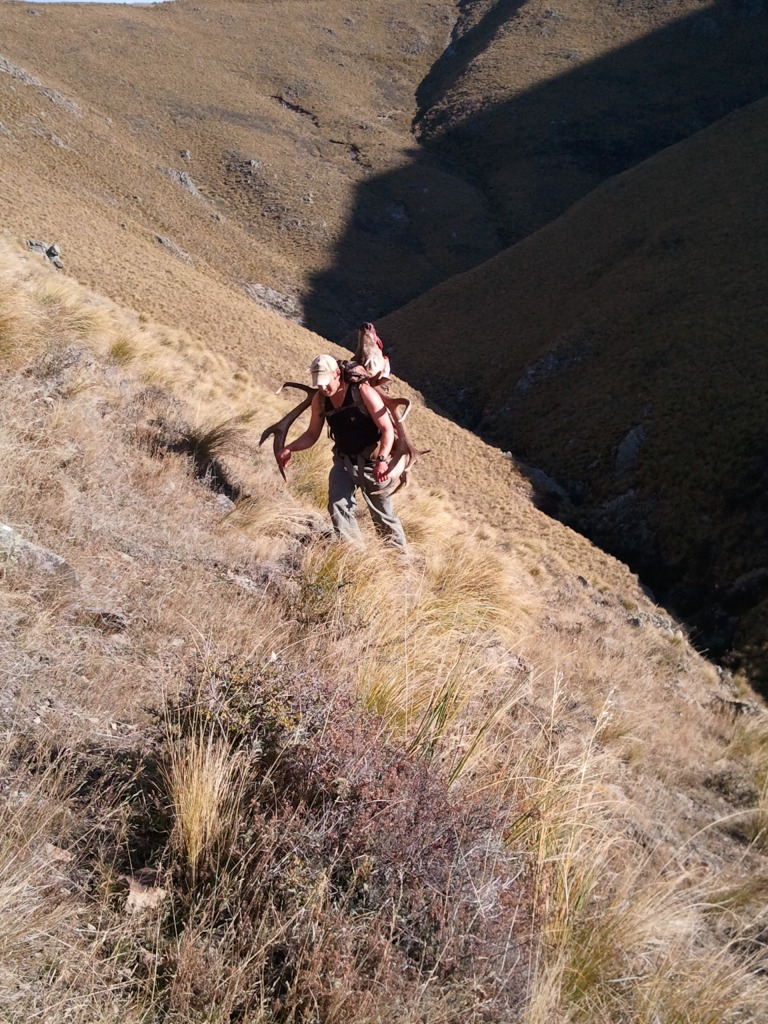 All in all a great hunt. Met some really good people in camp and hope to someday return to the "land of the long white cloud" for tahr. 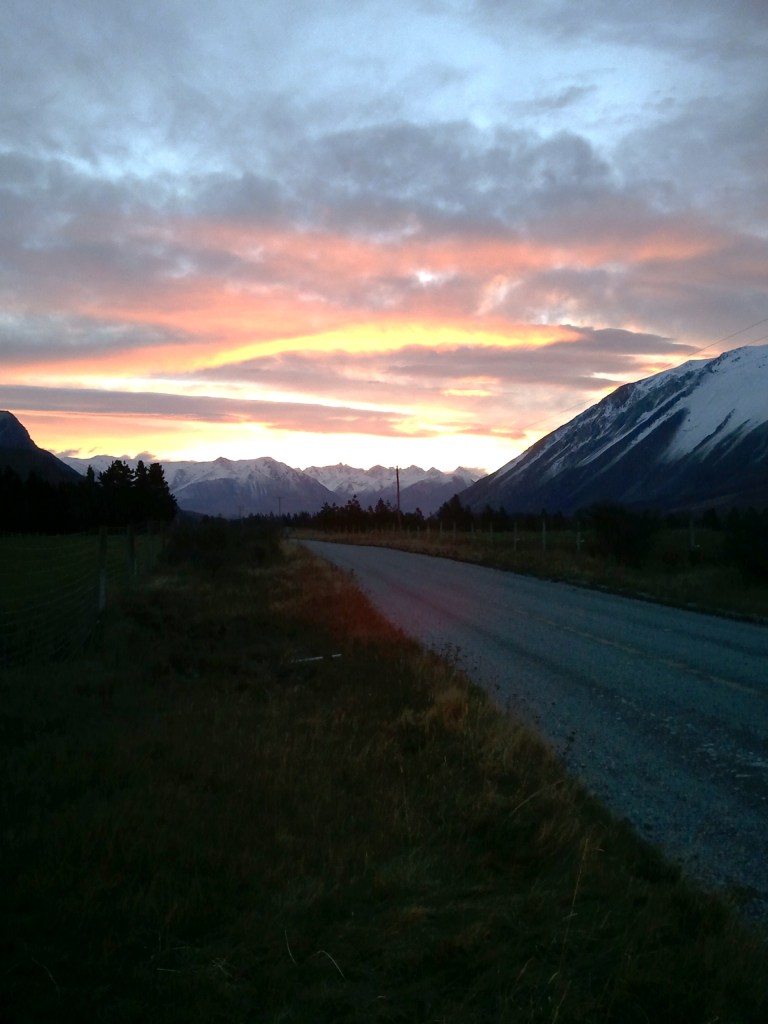 Thanks for sharing your story.

There are some good scrapes on those antlers. No broken points though.

Congrats, Red stag is definitely a bucket lister for me.
Why we hunt, even lions? Real hunters need thriving wildlife, so we help make it happen. - Olivia Nalos Opre

Nice stag! Stag, tahr and chamois are on the list.

Thanks for sharing your New Zealand hunt and beautiful pictures with us Jambo! Congratulations!
Jerome Philippe, Founder of AfricaHunting.com
M

Beautiful stag, well done.
You must log in or register to reply here.