Well dakota and I got lucky and drew 4 tags. First up was dakotas muzzlerloader pronghorn hunt. WE arrived one day early to do some scouting and had 4 days to chase some speedgoats.

After seeing a monster on the first morning which we could only get to within 500 yds of we made plans to move to another spot. I swear they can see movement like no other animal I have ever hunted. That big buck busted us walking through trees at over 100yds and just played with us and let us get to 5oo yds to tease us.

As we moved to the second spot though we saw another good 16" buck that we could stalk. We made are move and thought all was going well when we saw horns come up the little rise in front of us. We had cut him off be he moved lower towards us instead of just crossing in front of us like I had planned. He had us pegged but was not sure what we were. The only bad thing was I could not move to range him and he was closer then I thought and told dakota to shoot for. He shot high and off he went unharmed in a dead run to get away. We stalked one more which we passed on but great first day.

Day two we head back after the monster we found only to see him get ahead of us again. Even went in after him way early then before in the dark but he is a smart old buck. Chased a few more with no luck but all kinds of fun.

Day 3 was crazy as we stalked a few and coming back to the truck had 8 bucks just watching us that we never saw at all till it was to late. Learned some good lesson on hunting them though and getting to understand them speedgoats of new mexico better each year.

Day 3 was a day I will never forget and again some more crazy stuff happened. Had stalked a few and was going back when we though we had spooked them off. To walking right in to a good buck as we came over alittle rise. He sees us but does not know what he wants to do. I get dakota on the sticks buck turns broadside and he takes the shot. Buck goes down and we do a high five as we so happy. About 15 seconds go by and I turn to my right to see a buck standing looking at us. I was in shock and was thinking what the hell is going on. I get the bino's up to look and no blood or any sign of being hit. I am thinking ok this is another buck then. I look back to were the buck we shoot should be to see him not there.

I turn back to the buck standing there again and he turns to run. Again look no blood on other side either and off he goes like a rocket. One lesson learned dont high 5 with out reloading a muzzlerloader. We walk up to were the buck should be no blood or sign of a hit at all. WE follow the tracks for a few hundred yards and wait. No blood or any side still and we are no just in shock as to what has happened. We tracked and searched for the next 5 hours with no sigh or sighting of him at all. Still not sure what had happened other then I have no doubt he is alive and well.

Day 4 and last day to hunt. Go back double check on the buck we thought we had got but nothing around so we hunt on. Look for the big buck but he is missing also. Try to make a plan as dakota is ready to take any buck as we love the meat from pronghorns.

WE had to check a spot were elk should be but the pronghorn in the area use when the hunting starts. I spot one about 3/4 of mile up the mtn side. i can see dakota is like we have no chase but I make a plan. The wind was perfect and blowing so it covered our noise walking also. He had one way out so we would see him if he blow out before we got to him. We make the stalk get to the spot and I sneak a peek and there he is lookig at us. I was like how does he know. We back up 25 yds go around and come up over top of him with him still looking down were he thought we were still standing. Get the sticks up and have him at 80 yds quatering away for a perfect shot. The gun goes off and down he goes. I am just watching and dakota is like lets get the gun loaded to which I say dont worry about it. To get the answer back not this time lets load the gun and be ready.

Kid learned the lesson but dad was being dumb again. So we reload give him a minute as we watch him. He never moves and now the nice long walk dragging him back to the truck.

We had a great hunt again and ended with a nice 12 1/2" pronghorn which is tasting very good. I will do my elk shortly and share that fun to. 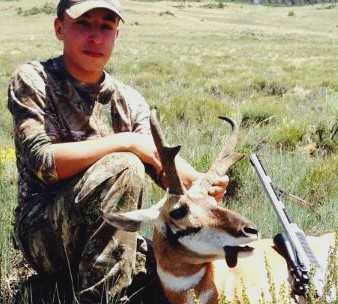 Thanks. Hunting antelope is one of my favorite hunts. My family also likes pronghorn meat the best.

Great way to start the hunting season. More fun for your son to get one than yourself. Congrats to you and your son. Bruce

Very nice Bill. Congrats.
Tommorow is promised to no one. Go live your dreams.

Congrats to you and Dakota!

Great job.
And here I am, returning to Africa of many faces;.... the sloe-eyed temptress with flowers in her hair who stole my youth and my heart, and left me an old man with a kaleidoscope of conflicting memories of many dashed hopes and some fulfilled dreams. E. Echols

My Best Deer So Far
2

B
USA: My Favorite Hunting Moment So Far!

Well no africa this year but new mexico hunting is on