Does anyone have any experience good or bad with new Marlin lever action rifles? I know quality took a big downturn after they were acquired and moved by Remington, though that was a few years ago. All the searches I've done have turned up that quality was very hit or miss (mostly miss), but I can't seem to find much that was from the last year or two. I know any factory can turn out a lemon, but I wasn't sure if I was better waiting for a older JM model. Thanks!
A

Having worked in a GS since Rem took over Marlin, I have seen them go from 'avoid even with a 10 foot pole' to nearly back to the same quality. Obviously you will have some diehards that insist on pre-Rem only.

In my experience, anything manufactured since 2017 has been as good as you could ask for, allowing for the odd one here and there with minor issues.

I purchased two 45-70 1895s in 2017 for hunting whitetails in states which permit only straightwall cartridges. Fit, finish and accuracy are fine.

I have one purchased in 2005 that is outstanding! 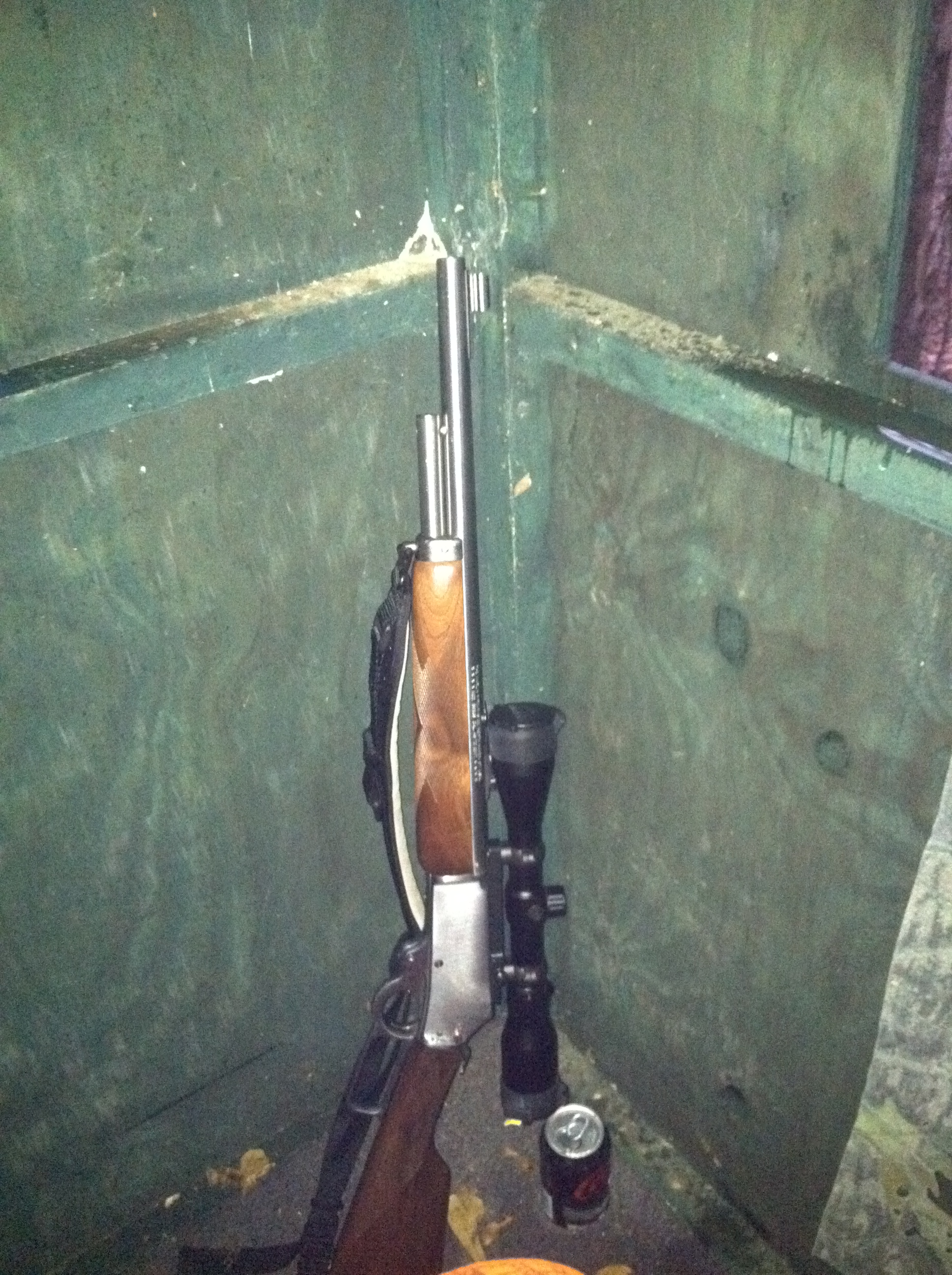 Have taken it to RSA once but didn’t shoot anything with it.
Last edited by a moderator: Aug 19, 2019

Out of the box, a couple minor problems
1. Front sight dove tail was so loose, I was able to push it out with my fingers. Wasn't that big of a problem for me because I was replacing the OEM sights with XS sights (front and rear) when I discovered that issue
2. first time I disassembled and re-assembled, the fore end didn't line up well and I broke the head of one of the tenon screws. Ordered a new pair from Brownell's, which the shipping cost more than the new screws.

Accuracy - mine has stellar accuracy.

With all 4 bullets, I've been able to work up loads where I get at least 2 out of 5 touching from 100 yards.

Keep in mind it is a lever, and if you shoot the barrel hot, you'll start getting vertical stringing.
"Only accurate rifles are interesting." -- Townsend Whelen

Thanks guys! I have read some horror stories, so it's good to hear from people with good experiences.

Is that with the XS sights? I've been looking at those as a possible upgrade (is there something wrong with me already researching upgrades to a rifle I don't have? Oh well, I've bought holsters for guns I don't have before too. They get filled eventually).

Yes. About a year or so ago, I finally switched to a scope because I'm 50 and don't see as well as I did even 3 years ago when I got the rifle. This was about a 65 yard shot on the leader of a small sounder. This was technically a miss - my lead was about 3" too far forward, as I was trying to put it in his ear. 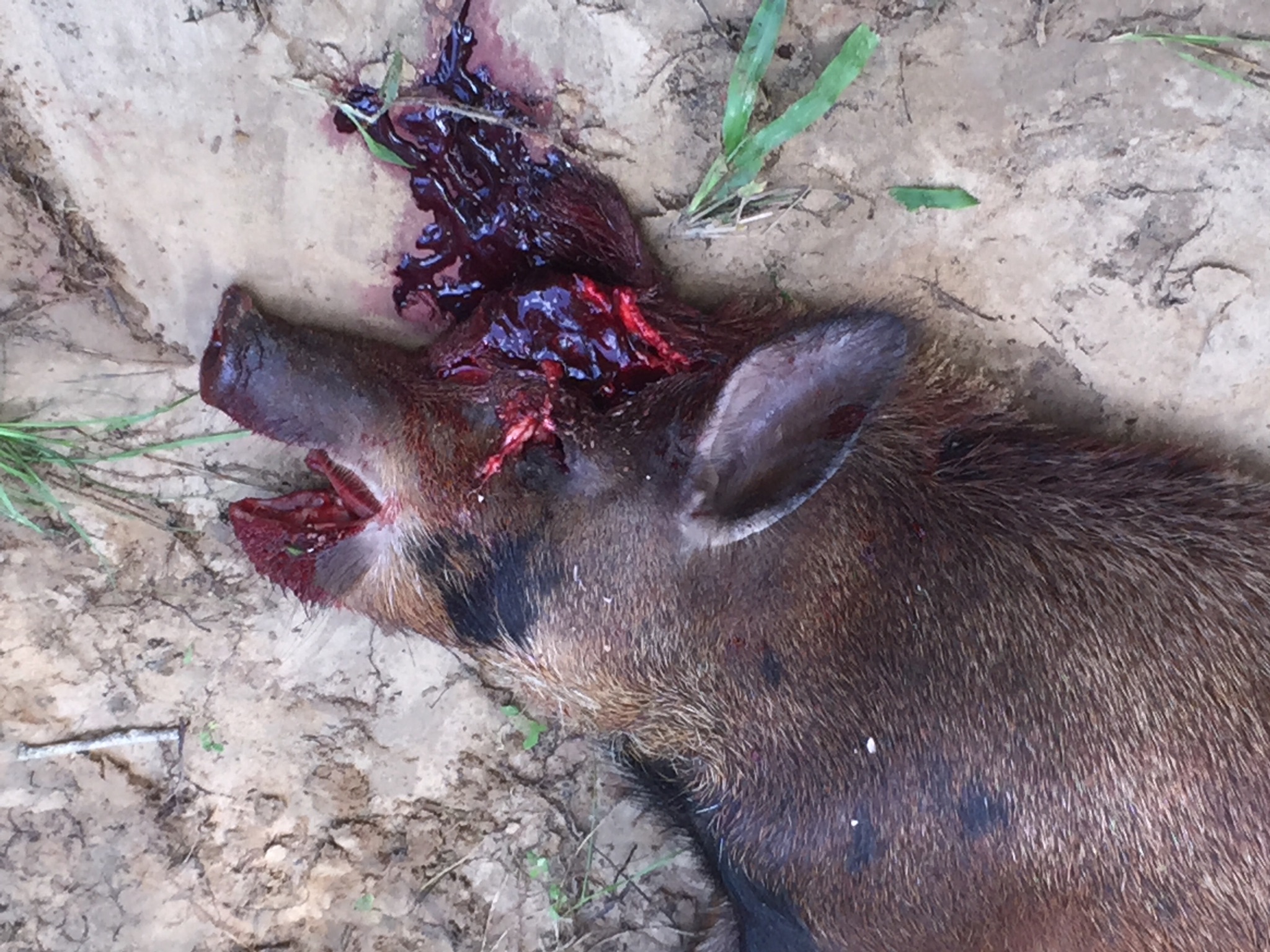 That is some great shooting! I've scoped all rifles I've shot much and now have an interest in learning to be at least passable with iron sights. Maybe a .45-70 isn't the best for that, but it sure will get the job done hunting.

I do not like the OEM sights from Marlin. Along with XS Ghost ring, you might also look at Ranger Point Precision and at Skinner. They're all in the neighborhood of 100-150 USD.

There is a big difference, for me anyway, between the precision possible with aperture sights vs what I can do with a dovetail.
"Only accurate rifles are interesting." -- Townsend Whelen 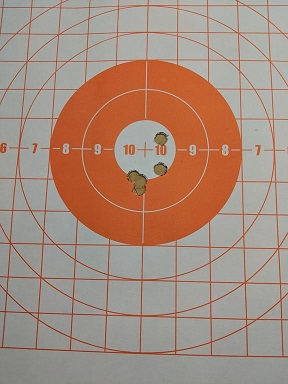 425 gr on the left, 405 gr for middle and right. These were done with XS ghost rings. Note the vertical stringing in the center target.

A very high degree of accuracy is possible with apertures, as you can see here. I am not the only guy who can do this. Probably lots of folks on this board can do it better than I can.
Last edited by a moderator: Aug 19, 2019
"Only accurate rifles are interesting." -- Townsend Whelen

Personally, I'd hold out for a JM, and an older one at that (same with Winchester lever guns...just as with the Model 70, pre-64 is what you want, not due to a change in the action but rather a change in materials and overall quality).

Thank you all for your valuable input. I have a few busy weeks at work coming up, but I will find so e time to find a store in my area that has an 1895 to take a look at.

gun broker usually has quite a selection of 1895's, including older JM-stamped Marlins. $700 or less is an outstanding price for any JM-stamped 1895.
"Only accurate rifles are interesting." -- Townsend Whelen

Adam, sent you a PM. Check it out, I may be able to help you.

No issues to report with mine. I can get 100yard groups of about 2" using the stock open sights and a 240gr hardcast going about 1100fps. It also groups about the same with book max hunting loads using 265gr interlocks. One of the easiest riles I've ever done load development with as well, although I guess that's mostly luck.

Bluing is good, action is smooth and the wood isn't bad either, although they do come from the factory extremely dry. Mine has had about 10 coats of linseed oil since and is coming up well. Fit and finish is also fine, although perhaps not quite up to the standard of the older ones, especially wood to metal.

Perhaps mine is a good one, but based on this experience I'd have no hesitation in recommending the new production guns.

I have a 1894 in .45 Colt (2017) that to my eyes has not the nicest finished stock, checkering looks poor, stained finish is blah. But shoots fine, had a gritty feel to cycling the lever when first received (fixed that with a thorough cleaning), wood to metal fit is OK, iron sights are straight and not canted. I looked at a handful of 1894's in 44 Magnum when Remington started producing them a couple years ago, I was not impressed with the wood finish and some had sloppy fitment between the buttstock and receiver tang.
I have several older Marlins, a 1980 336C pre-crossbolt safety Texan in .30-30, 1894 in .357 Mag (2008), 336C in .35 Remington (2009) and a 1895 in .45-70 (2009). I prefer JM made vs. the Remlins; would consider a Remlin 1895 if I could look it over before buying but would likely try to find a used JM model first.
You must log in or register to reply here.

NO more Remington for me unless there's no other choice...
2

Any experience with new M70's made in Portugal?
2

Tell Capt. Moody that Fred Gunner sent you
Today at 7:32 PM •••
R
raamw neckdeep raamw wrote on neckdeep's profile.
Supply your address so I can get shipping Paypal Friend (no ) fee) is fine
Today at 10:09 AM •••