In the year 1898, a railroad camp in Tsavo, Kenya was terrorised over several months by a pair of lions who killed and ate an estimated three dozen railroad workers before being shot and killed by Colonel J. H. Patterson. The event is so infamous there's even a movie about it. But one question has remained unanswered all this time: what motivated these predators to hunt humans?

"The original story was that these lions were desperate and eating anything they could, [even] crunching on bones," said Larisa DeSantis of Vanderbilt University in Tennessee. Seemingly supporting this narrative, Tsavo was going through a drought and a rinderpest epidemic at the time, and Colonel Patterson himself described the lions chomping into the bones of their victims. 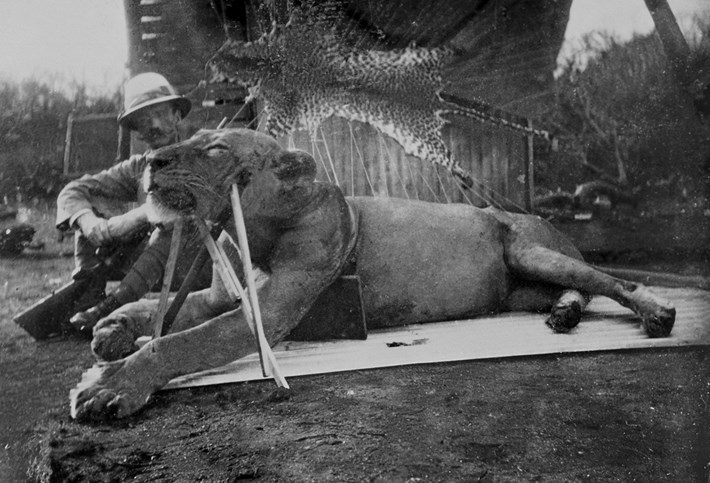 Colonel John Patterson along with one of the Tsavo lions he shot back in 1898.

But in a new study, DeSantis was able to put this hypothesis to the test. Some time after killing the lions, the Colonel sold their bodies to the Field Museum in Chicago, where they remain to this day, preserved for research. Evidence from the cats' teeth and jaws paints a picture of their diets over the final weeks and months of their lives.

And the evidence doesn't match up with the idea of these predators being desperate for scraps. When animals eat, their food leaves microscopic patterns of damage on their teeth, called microwear. Carnivores that crunch bone, like hyenas or desperate scavenging cats, end up with very recognisable patterns – and these lions simply didn't have them. Their teeth compared well with lions in the wild or in captivity that have plenty of meaty morsels to chew on.

It doesn't look like these lions were starved for lack of food. And a previous analysis of chemical isotopes in their fur and bones revealed that they had been eating a variety of prey besides humans, which suggests they weren't lacking in choices either. So, why make the switch to eating people? The answer seems to be poor dental health.

Left: The more human-hungry of the Tsavo lions, with major dental damage. Right: The jawbone of the Mfuwe man-eater, with injuries consistent with being kicked in the face.

One of the Tsavo lions had such severe dental disease that he had broken a canine, three lost incisors and an abscess. The second lion had less severe injuries, and also appears to have been eating less human prey. Investigation of another "man-eater" lion (it also ate women and children) from

Mfuwe in Zambia – which killed about six people in 1991 – showed that it also had a nasty fracture on its lower jaw.

These dental issues, DeSantis explained, "might have challenged how they hunted, might have been painful, and might have also severely impacted their ability to take down large prey." For these pained predators, accustomed to powerful prey like zebras and buffalos, humans must have looked like a much easier option. 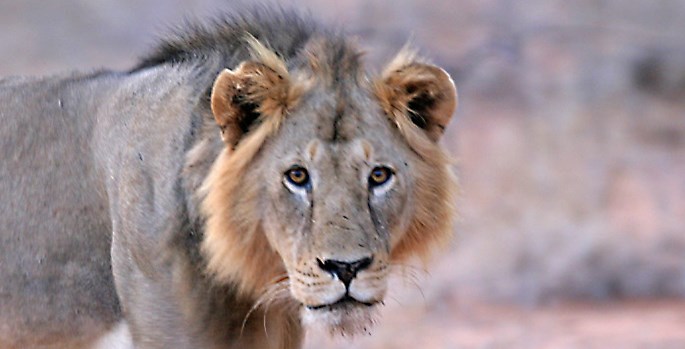 A male lion of the Tsavo region. These cats are distinctive because they don't have large manes.

"We don't tend to like to think of ourselves as being on the menu for cats, but we are, and we have been for a long time," DeSantis said. "While man-eating isn't all that common, it's not all that rare, either."

In Tanzania, between 1990 and 2004, a total of 563 people were reportedly killed by lions. Just last year, in the Gir Forest of India, another trio of lions was captured after killing three people. Recent reports have also identified leopards and tigers as hunters of humans. Anthropological records of humans being devoured by cats go back a long way.

For DeSantis, the take-home point here is that we need to keep this dynamic in mind as we move into a future of rising human populations and shrinking natural ecosystems. "There are going to be consequences of increasing one prey source, which is us, and decreasing other prey sources, which are many of the [big herbivores] on the landscape," she said.

As intriguing as the results of this new research are, DeSantis doesn't think the mystery is totally solved. Dental issues don't always match up with man-eating habits, and vice versa. More information will require more research, and for that, museum specimens are critical.

"It's hard to fathom the motivations of animals that lived over a hundred years ago, but scientific specimens allow us to do just that," said study co-author Bruce Patterson (no relation to the Colonel) in a press release.

The modern study techniques used to examine the cats' skulls would have been unimaginable a century ago, DeSantis told me. "And who knows what we'll be able to tell about them one hundred years from now." 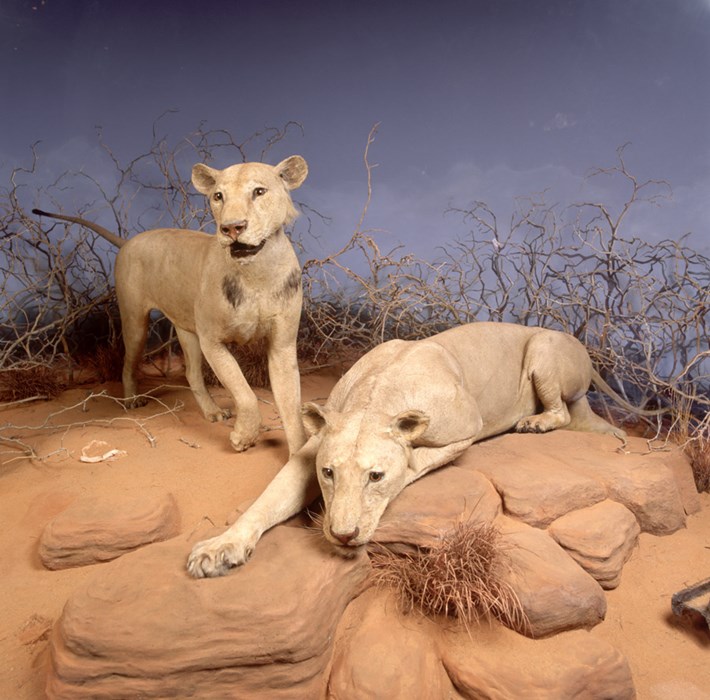 The Tsavo lion exhibition at the Field Museum.

Knowledge is its' own reward. thanks for sharing.
P

Interesting read, thanks for sharing!
John 3:16

Very interesting. Another reason to encourage good dental hygiene with an emphasis on flossing.

Interesting, thanks for posting.

Thanks for the info !

Sounds like these Lions got kicked in the face trying to take down large prey. Maybe the jaw and dental pain caused them to seek easier meals.?

Reading Col. Patterson's book right now, so good timing with the post. Thanks!
B

I think a more reasonable question than "why did these lions turn man-eater" would be "why don't they all?". Even for a lion with a broken jaw and rotten teeth, people seem to have been pretty easy prey. We'd have to be even easier for a healthy lion. Got to be a lot less work than a zebra. A lot less meat, though. Perhaps they have somehow figured out that while people are easy to hunt, we tend to be a vengeful lot and our relatives hunt back.

Bert the Turtle said:
I think a more reasonable question than "why did these lions turn man-eater" would be "why don't they all?". Even for a lion with a broken jaw and rotten teeth, people seem to have been pretty easy prey. We'd have to be even easier for a healthy lion. Got to be a lot less work than a zebra. A lot less meat, though. Perhaps they have somehow figured out that while people are easy to hunt, we tend to be a vengeful lot and our relatives hunt back.
Click to expand...

I don't know, I have a few relatives I could spare...
S

Thank you for posting the article.

It seems like I read an article or in a book that the reason the Tsavo Lions may have turned to man eating was they were conditioned to it. The article pointed out that much of the labor for building the railway was imported from India. The article stated that when a worker died they were more often than not left in the bush instead of being buried. This was believed to have taught the local carnivores that humans were an acceptable meal and that the transition from eating dead ones to hunting and killing live ones was the next logical step.

Salesman I fully agree
My understanding from reading old first and second editions was just that. People paid to bury found it easier to just drag them off in the bush where they were found. This incident was by no means isolated as many many other documented cases exist Look up the Njombe man eaters that operated. From roughly 1932 to 1947 they accounted for 1000 to 1500 hundred according to G G Rushby. That's worse than any Stephen king movie. Cheers

Having read multiple accounts of these lions my understanding has always been that the body count was considerably higher than "an estimated three dozen". ????

GA Hunter said:
Having read multiple accounts of these lions my understanding has always been that the body count was considerably higher than "an estimated three dozen". ????
Click to expand...

I was thinking the same thing about the body count. Internet articles claim the Lions killed 135.
No telling how many already dead men that they fed on?

GA Hunter said:
Having read multiple accounts of these lions my understanding has always been that the body count was considerably higher than "an estimated three dozen". ????
Click to expand...

Not sure how accurate the science is but I read this a while back. 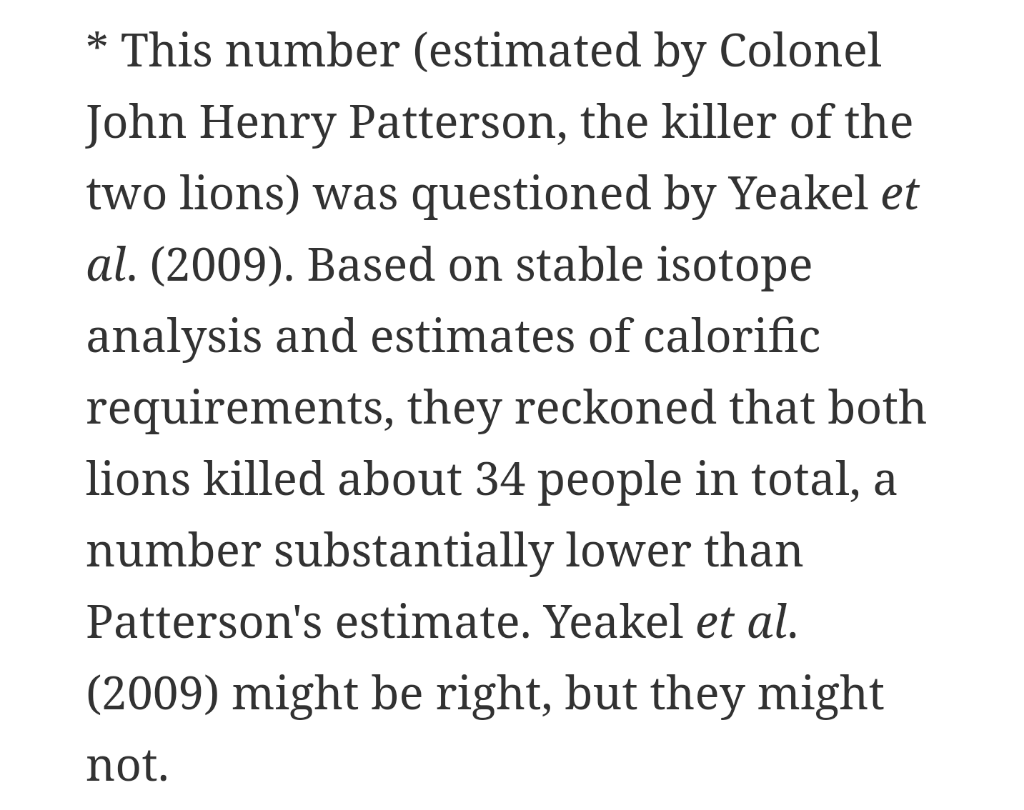 Maybe some of the attacks (those with the bone crunching) were done by other, hungrier cats. This place was already a lion haven thanks to s steady supply of dead slaves so one could assume the predators learned to associate lerge concentrations of people with easy food. Also, it seems that Corbett was right about why these cats turned maneater

Lions don't kill people Just ask Walt Disney
Be Yourself Everyone Else Is Taken
You must log in or register to reply here.

The Man-Eaters of Tsavo & Other East African Adventures

The Man-eaters of Tsavo & Other East African Adventures